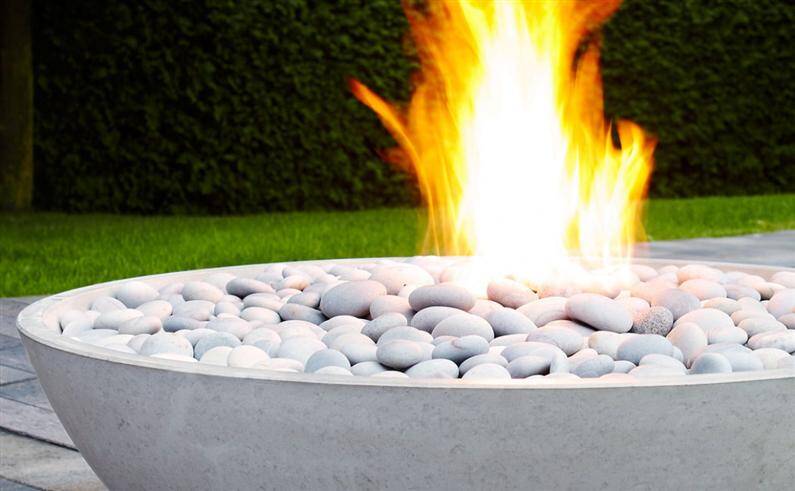 Fire is an essential, primordial element, linked to the human existence since the beginning of civilization. In the ancient times, fire was considered to have a divine origin, being a symbol of the power of gods. During centuries, fire was tamed and used as an element of development, thus being at the base of the majority of human creations.

The light of flames dancing on the walls in the night reminds of the warmth of ancient homes when fire was the only source of heat. A fire pit is an element of originality and natural beauty in modern house and it creates a mythical, spectacular atmosphere. 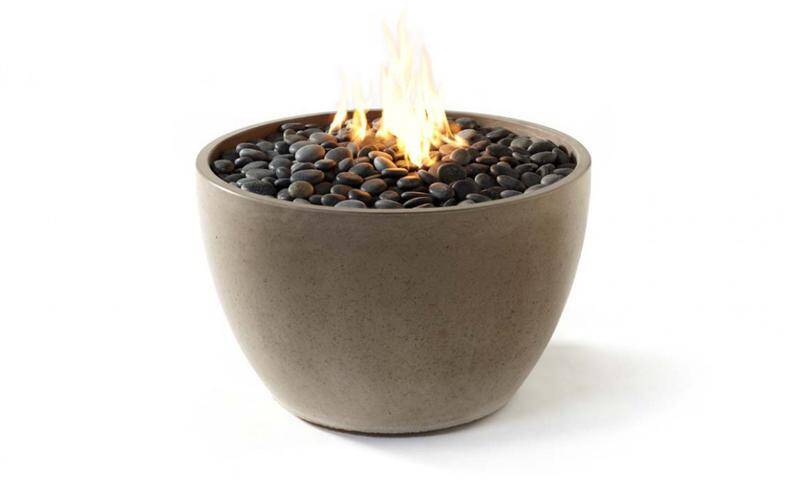 Fire pits are more than just beautiful features for outdoor spaces, they are vehicles for bringing people together. Few things are more fundamental, or more enjoyable, than sitting around an open ﬁre with family and friends. Paloformʼs collection of ﬁrepit designs add a modern dimension to the primordial campﬁre with simple vessels in architectural concrete, corten and stainless steel – all crafted by hand in Toronto, Canada. 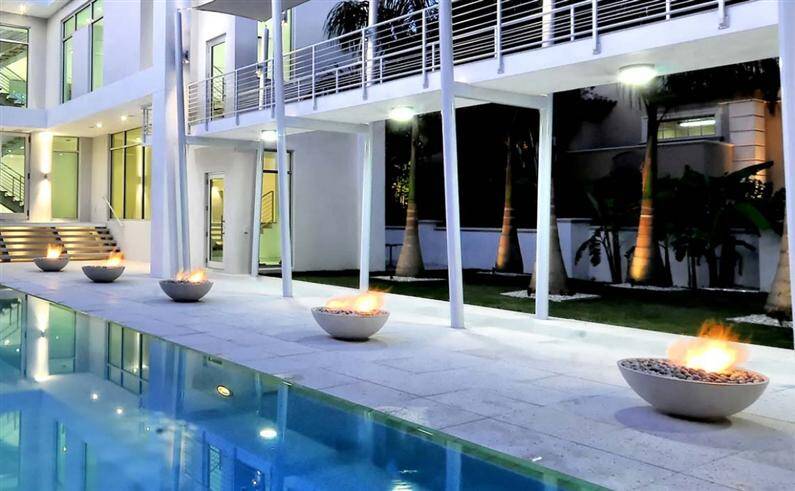 Paloform offers original and amazing solutions of integrating fire as an element of interior and exterior design. You may enjoy the greatness of an Olympic flame in your garden. They simply know how to combine handmade objects with the magical alchemy of fire creating a story like background that will definitely impress any guest. Fire pits are more than just beautiful features for outdoor spaces, they are vehicles for bringing people together. We invite you to enjoy the ideas of the Paloform and consider integrating fire in your habitat! 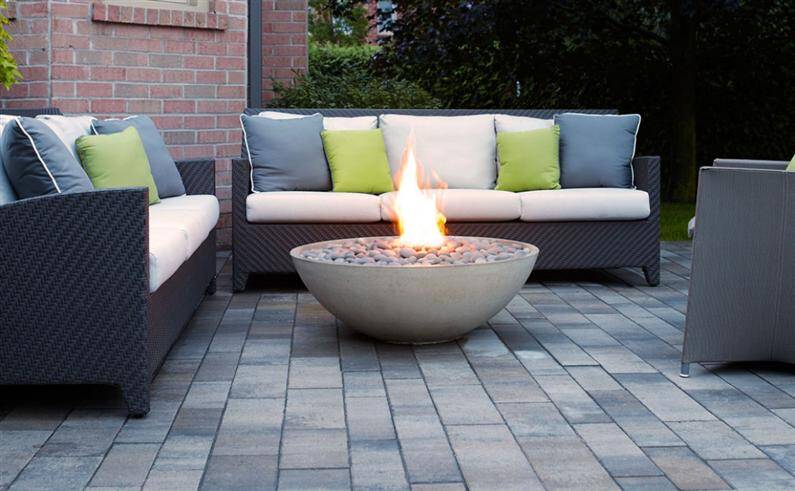 CONCRETE FIRES: Miso is a peaceful ﬁre bowl with wide, shallow dimensions. Soba is a ﬁre bowl of narrower proportions, suitable for use in multiples or for cozier spaces. Bento is our square ﬁre pit, whose angular geometry is right at home in modern gardens and outdoor rooms. All our concrete fires are handcast to order in one of six architectural concrete colours.
CORTEN FIRES: Bol is a large, shallow vessel that epitomizes the organic modern fire pit. Caldera is a dramatic and sculptural fire pit inspired by the crater left by a sunken volcano. Bol and Caldera are available as wood-burning fire pits as well as with a natural gas or propane burner. Bento and Robata are now available in Corten steel.
LINEAR FIRES: Robata is a linear fire feature that has the long, low proportions of a modern outdoor coffee table and Komodo has a six-foot fire that can function as a space divider or spectacular central feature.
FIRE TABLES: Fold fire table is available in two shapes, a 6-foot rectangle and a 4-foot square. It is substantial and sculptural, yet light and minimalist. A modern fire table in powder-coated aluminum and Corten steel. 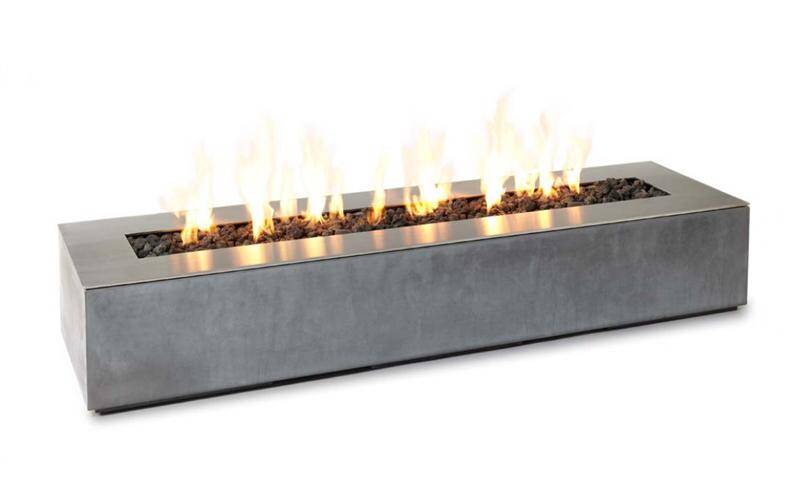 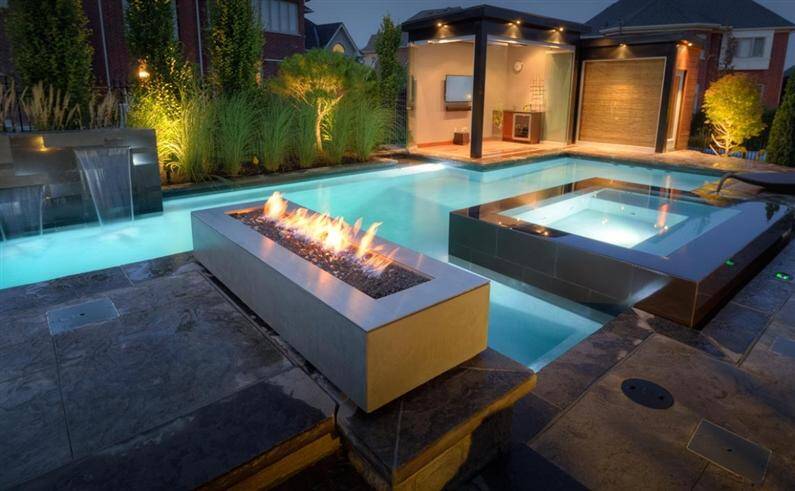 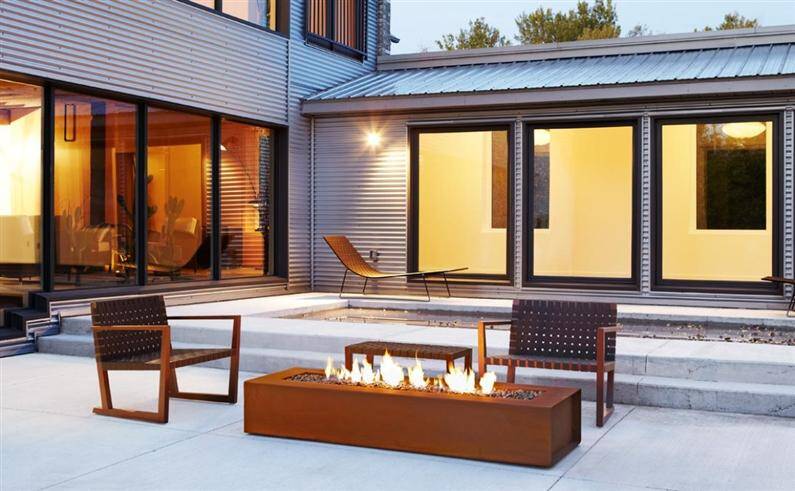 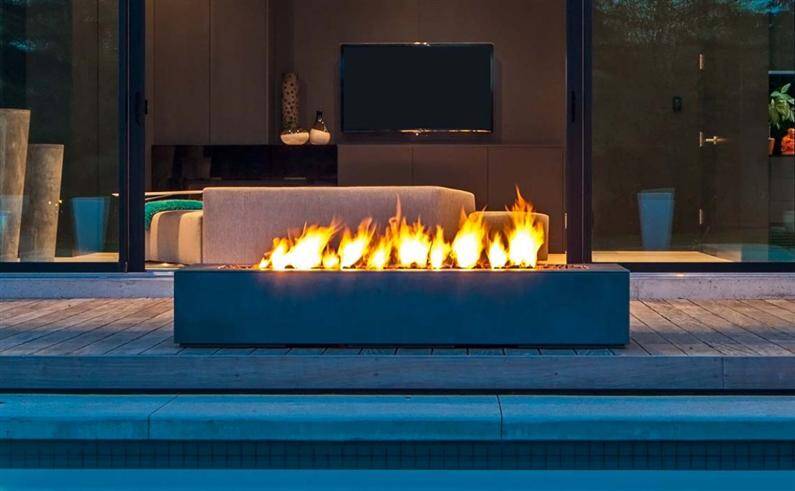 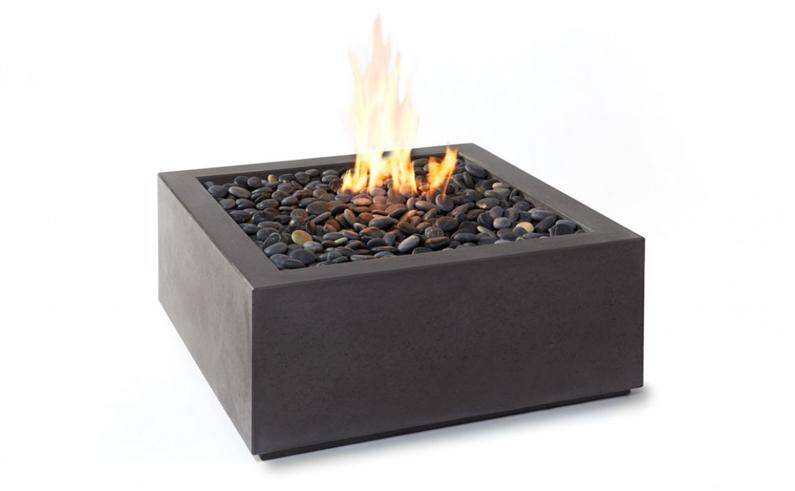 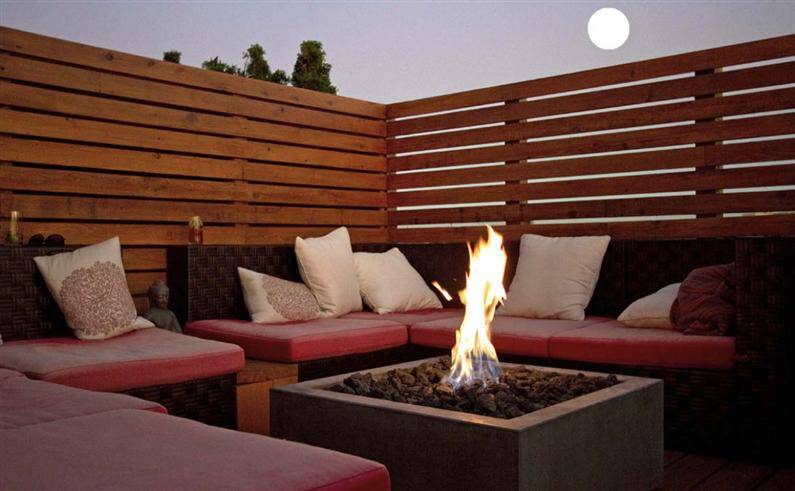 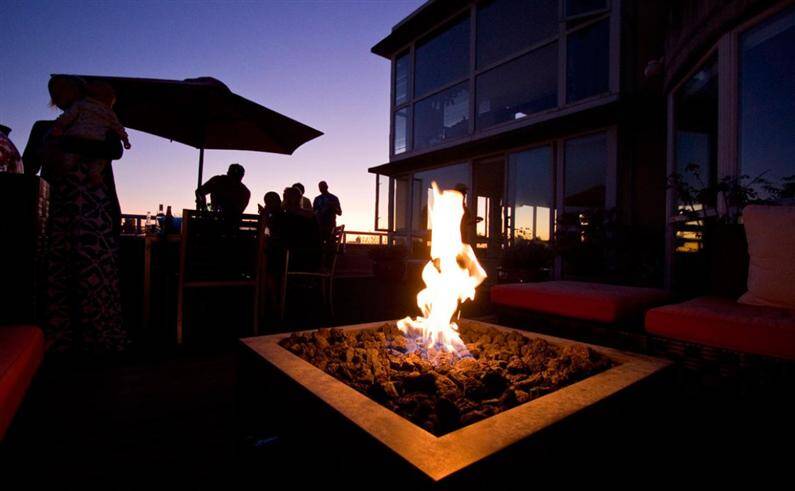 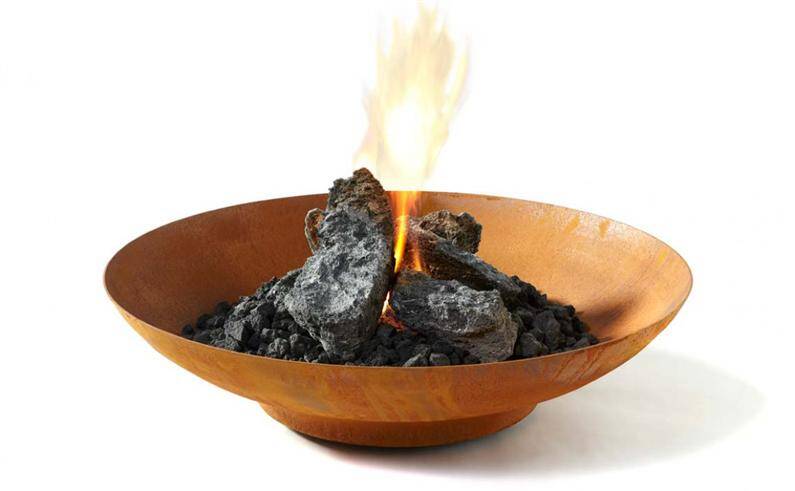 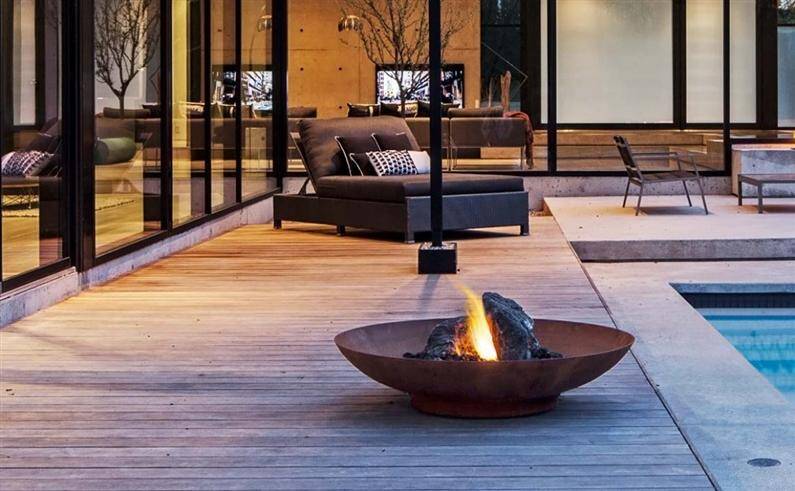 Deep Dive, a luxurious new bar in Seattle—loosely inspired by the worlds of Charles Darwin and Jules Verne as well as a dash of 1920s speakeasy—seeks to capture the human spirit of curiosity and imagination.
Read more

OPALO Store by Alapar Studio: A Fresh and Delicate Boutique

The new OPALO store space focuses on returning the prominence to the product by creating a boutique where personalized treatment is one of its hallmarks.
Read more

Terraced house owned by a family of four is situated in a calm residential area of Slivenec. It was built as a part of...
Read more

Set in Montana's tranquil Shields River Valley, the Shilo Ranch Compound by Miller Architects is a collection of structures that were specifically built on...
Read more

The place with an area of merely 17.3 square meters located in an old building in the very center of Odessa was inherited by the current owners. Having no idea what to do with it, they turned to Fateeva Design creative bureau.
Read more

The Palm Springs House is embedded in a San Jacinto promontory that overlooks the valley and mountain ranges beyond. The home celebrates its setting, capturing the spirit of its region in its form and execution.
Read more
Renovation Projects

This old barn conversion project was recently completed by Savioz Fabrizzi Architectes. This small cottage is located in Saleinaz, Switzerland. Built in the second half of...
Read more
Contemporary Houses

Equivalent to the brownstones of New York, this interwar duplex is a humane scale solution to housing in the Sydney city fringes. Shoulder to shoulder...
Read more
Contemporary Houses

Gracia House is an old dairy farm in Barcelona transformed by Lluís Corbelli in one single house with high standard finishes. The project was designed in...
Read more
Casey Dunn Photography

Dexter Residence is a single-family home designed by Stuart Sampley Architect, a full-service architectural practice based in Austin, Texas. The Dexter Residence bridges past and...
Read more
Carl-Viggo Hølmebakk

This project for a summer retreat is an addition to, and rehabilitation of an old “Nordlandshus” (traditional northern Norwegian house) on a remote site in the coastal island area of Lofoten.
Read more