Japanese culture has become the main actor in Cersaie, The International Salon of Ceramics for the Arquitecture and Bath that is being celebrated until September 30th, thanks to Peronda Group and its new concept stand designed by Empaperart, in which the tile firm has presented its novelties in the 15 E8 F7 Hall of the fair enclosure.

“A Little piece of Japan” became the motto for the artistic study, specialized in the design of spaces and development of products with paper art techniques, which has taken inspiration from the most representative Japanese streets and traditions, as the Sakura or blossoming cherry-tree, in order to project the image of Peronda Ceramic’s product line in the expo. The approach seeks to captivate the attention of thousands of visitors that will enjoy several days through one of the most prestigious international meeting in the ceramic sector, thanks to Empaperart’s fusion of the latest tendencies of the company with the paper and cardboard crafting techniques.

The ephemeral set up of Empaperart, designed following an itinerant “pop up store” structure that Peronda Group renews conceptually on each campaign, is fitted with an external cardboard panel reinforcement provided by Reboard, which has been chosen because of its sustainability, lightness and great resistance, to represent the different sceneries of a Japanese street. The interior access is delimited by a grand cherry-tree in full bloom that welcomes visitors to this detailed Japanese corner.

The assemble of the Sakura has taken place in paper, personalized with the same form and chromaticism than the authentic branches of cherry-trees by combining the paper cutting with a 100% artisanal finish. About 10,000 pendulous leafs surround the visitors in a formidable visual experience that immerses them in an oneiric trip to the Asian country.

Once inside, the ceramic firm presents its products, incorporated with the rest of the decoration, furniture and inside cardboard structures, in a scenography that recreates elegant Japanese environments such as Onsen or thermal bath, Irori or chimney to warm and cook, and a peculiar Izakaya which simulates the popular and typical bars that are frequented after work in Japan.

The environment has been taken care of to the highest extent so that the tiniest detail follows closely the Japanese culture. Because of it, another proposal by Empaperart to bring the project’s scenography to life has been to incorporate artist Belén Segarra’s talented hands who has been in charge of illustrating by hand the “A Little Piece of Japan” concept within the 60 linear meters that the stand.

This imposing expositive concept, that has just been introduced in Cersaie and that will tour other fairs of the sector such as Cervisama 2017, meant the first collaboration between Peronda Group and the Empaperart team. An intense creative process with months of work between both teams, immersed in Japanese culture in order to merge the raw materials of creation, ceramic and paper, in a project that aims to become a design reference for the ceramic sector and ephemeral architecture.

With this participation, the art paper of Empaperart regains presence in the Italian fair after its collaboration in 2014 with the firm Argenta Cerámica. And, after last year’s edition of Cevisama attendance with the aerial installation of “Armonias de Papel” for the Trans/hitos space commissioned by the ITC, the paper artisans position themselves as a value and quality warranty option to create notorious and differential spaces, ephemeral or not, through their visual impact weapons: paper, cardboard and their passion about their job. 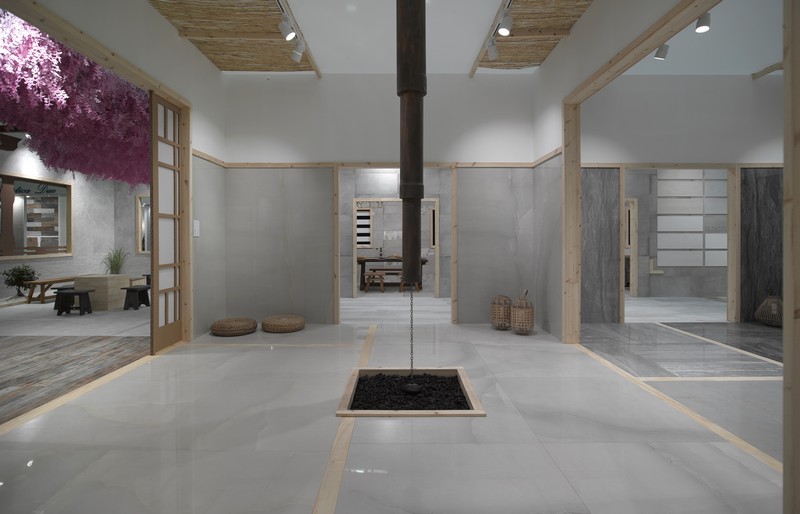 Off Grid Modern Cabin Located in the Rolling Hills of Idaho

Ubabub – Crib for Babies with a Special Aesthetic

Lola Glamour: a world full of color and sophisticated design

CuldeSac Designs Legit, the Temple of the Sneaker Culture

Wearing shoes becomes a ritual, and each corner of the shop is like a museum, with household objects that work as support for sneakers exposed highlighting the special of its nature, giving them the place they deserve in the collector’s imaginary.
Read more
Restaurant Interior Design

After the successful launch of the SLA salad bar in 2012, 10 locations opened up in the Netherlands since then. From the 11th location onwards Standard Studio is asked to create a new design for the interior of the future SLA salad bars.
Read more
Houses

The Wonderland Park Residence is nestled in the famous hills of Laurel Canyon in Los Angeles, CA. The Wonderland Park area is a special enclave of mid-century residences that include neighbors such as Case Study #21 by Pierre Koenig built in 1959.
Read more
Houses

Butterfly Residence is a San Francisco modern house designed by John Maniscalco Architecture. This complete rebuild of a mid-century, the design flows from an analysis...
Read more

Kitchen Design with Subtlety of Form and Comfortable Functionality

The Living Cube / Till Konneker

On a Pedestal? Choosing the Right Washbasin for your Bathroom