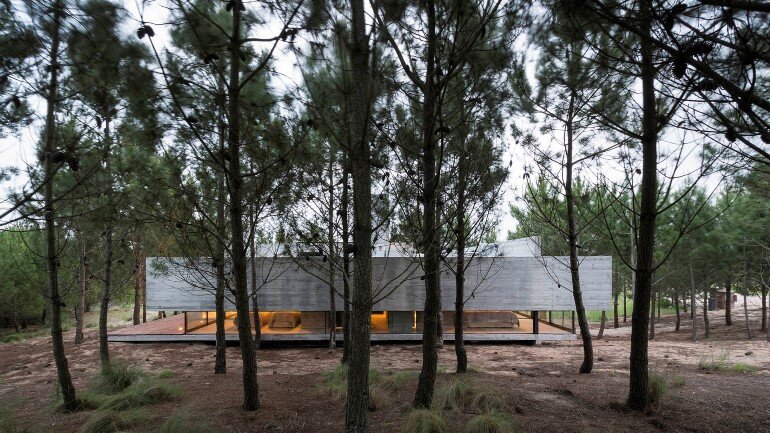 Description by Luciano Kruk: L4 House is located in the Costa Esmeralda gated community, thirteen kilometers north of the city of Pinamar and four hours from the city of Buenos Aires. The neighborhood where the house is located, Barrio Marítimo II, is linearly parallel to the sea. A pine forest divides the neighborhood from the coast, respecting the 200 meters setback established by provincial regulations. The house should serve for use during short stays. It should also be able to receive guests and eventually be rented. 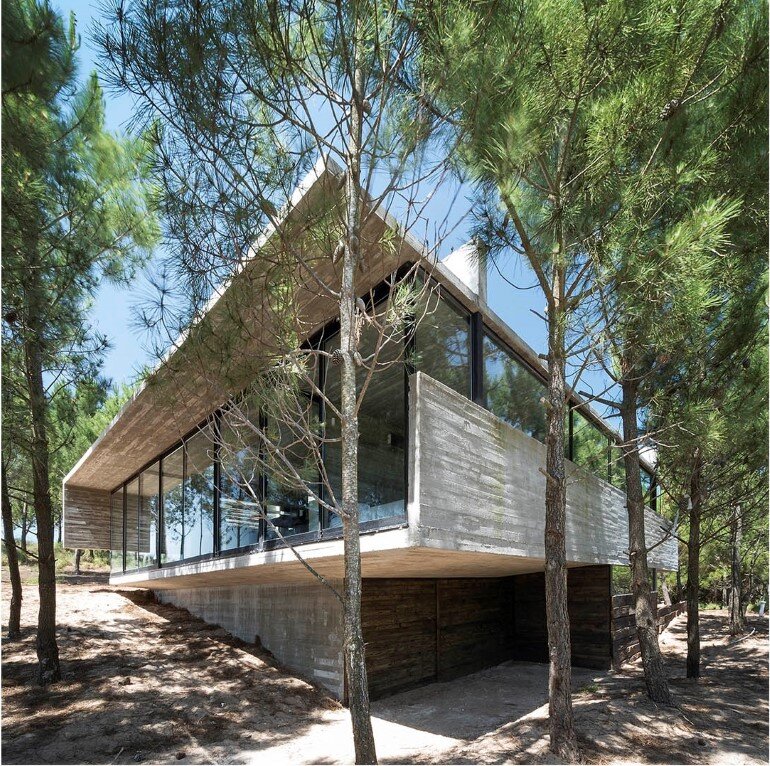 The lot, a pristine sand dune, was covered by rows of maritime pines. As for its topography, its surface descends across approximately two meters from one end to the other, while longitudinally it descends gently toward the sea. The choice of materials was based on two reasons. On the one hand, after the previous experience of having built other homes in concrete, we knew that this material could be kept in good shape over time with virtually no maintenance. On the other hand, we considered its color and texture would establish a harmonious dialogue with the natural environment of the place. 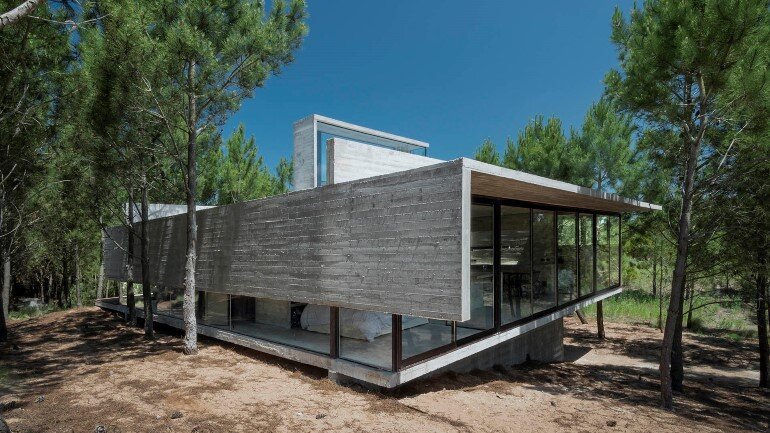 Regarding the social area, this should be constituted as bright, spacious and closely linked with the space outside the house; while the private area should be composed of four bedrooms as independent as possible, each served by its own bathroom. Our intention was to develop most of the program on one floor and have a higher exterior space, provided with water, from which to contemplate the stunning natural backdrop. We agree that both the trees and the particular topography formed the wealth of the site, which the architectural project should keep. 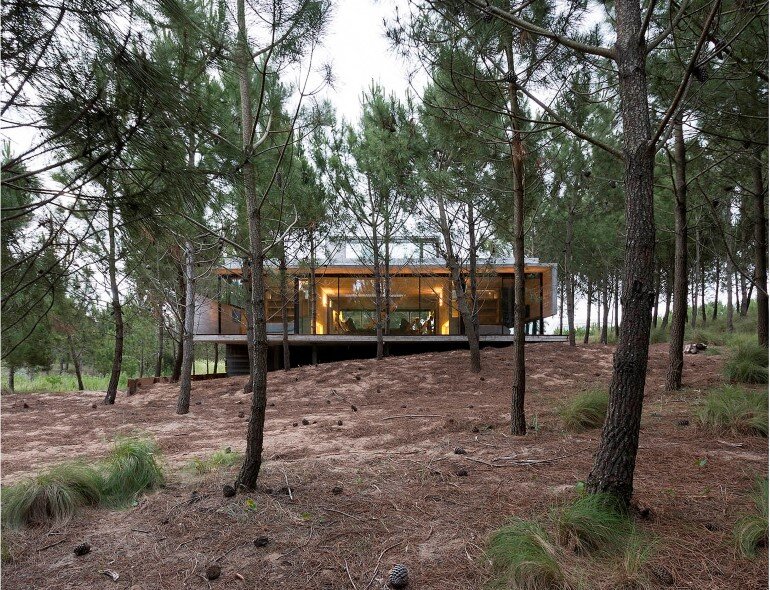 We wanted the house to be immersed in the woods, surrounded by the immanent atmosphere of the place. This was the reason why we decided to set it back beyond the statutory minimum distances. Away from the street the interiors would gain privacy while its rear space would not be compromised, since it visually extends beyond the limits of the site, merging with the forest adjacent to the sea. 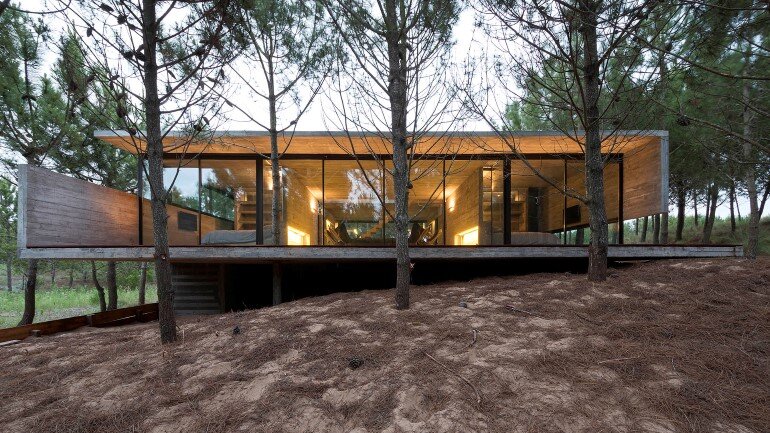 With the intention of creating a sensory contrast, access to housing is experienced from a dim half-covered space through a narrow staircase contained between two opaque concrete walls into a light and airy space: the main floor. With regards to this floor, in order to give the bedrooms as much privacy as possible, each is located in a corner of a square plan. 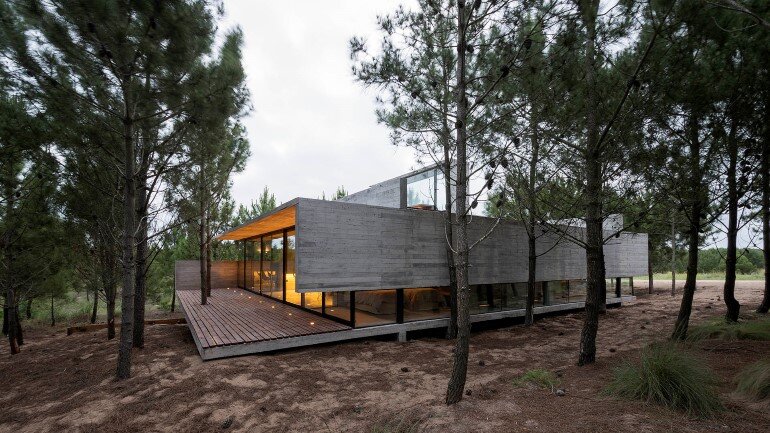 The social activities take place in the center. A staircase that leads to the roof is located at the heart of the house, contributing to its spatial organization. At the center of the public area, the kitchen-dining area is on one side and the living room on the other, keeping both of these spaces visually connected. The bedrooms and their respective bathrooms are laid out separate from the perimeter wall. 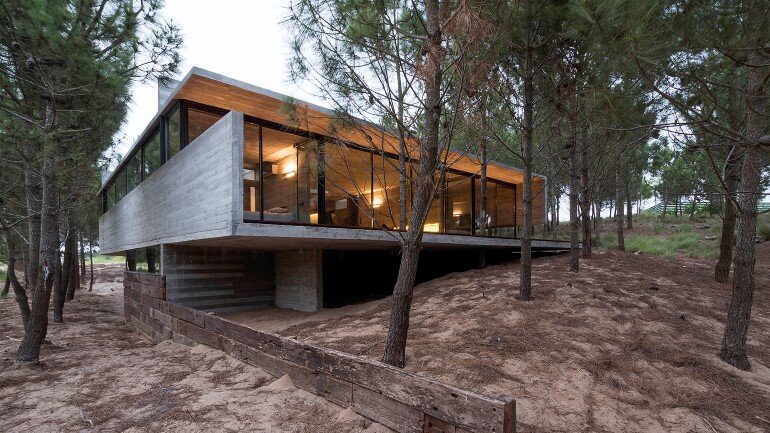 On the higher area, where the platform of the main floor is supported on the natural terrain, the lateral enclosure is reduced to a hanging wall, open to the exterior surroundings through a low longitudinal opening, protecting the interior space from the views of the neighbors. 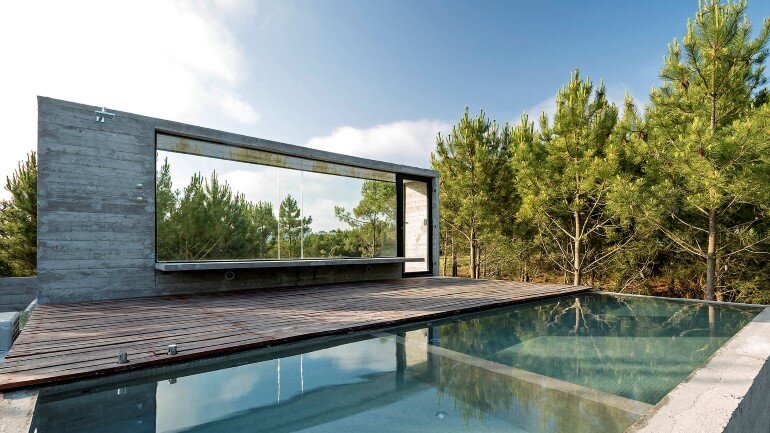 On the lowest area of the site, where the house is separate approximately two meters from the ground level, the lateral enclosure is built through a low all with a high linear opening. Both solutions allowed to generate exterior views and naturally lit spaces while preserving the private character of the interior. 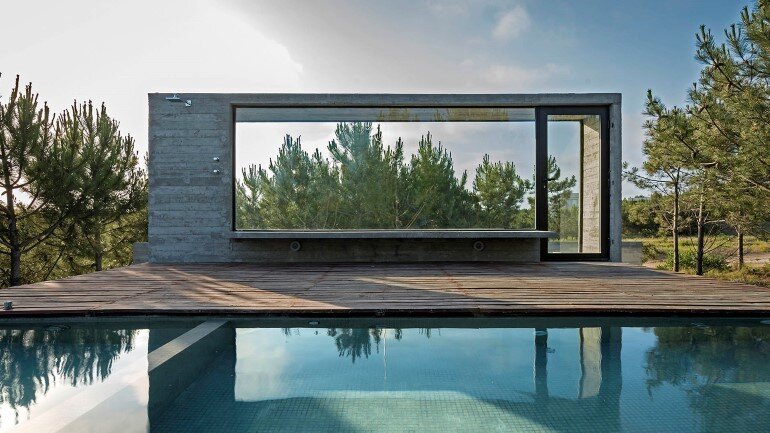 While the sides are closed by opaque walls with horizontal slits, both the facade and rear enclosure of the building were resolved through a transparent wall that, taking the entire width and height of the volume, directs and frames views. In the rear facade, by opening doors and windows, the interior space is extended into the partially covered deck expanding and uniting with the exterior. 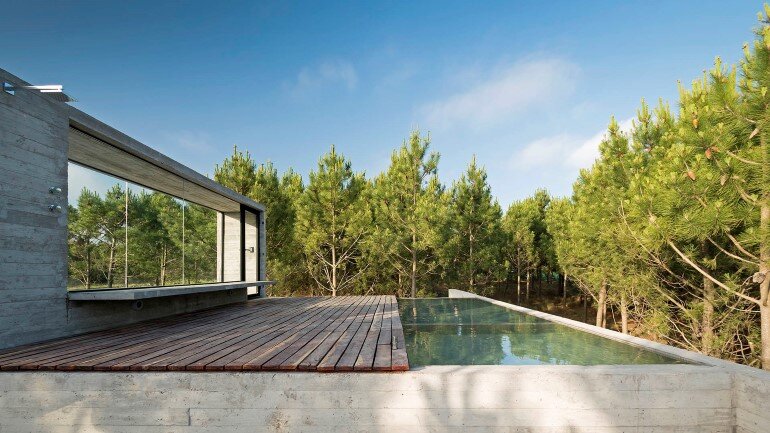 The very malleability of concrete can conceive the staircase as an autonomous sculptural element. The walls were designed with the same expressive plasticity that divide the bedrooms of the central sector generating on both sides, ledges and niches as fixed support furniture. With regards to the lighting, given the depth of the plan, we decided to reinforce natural lighting from the roof. 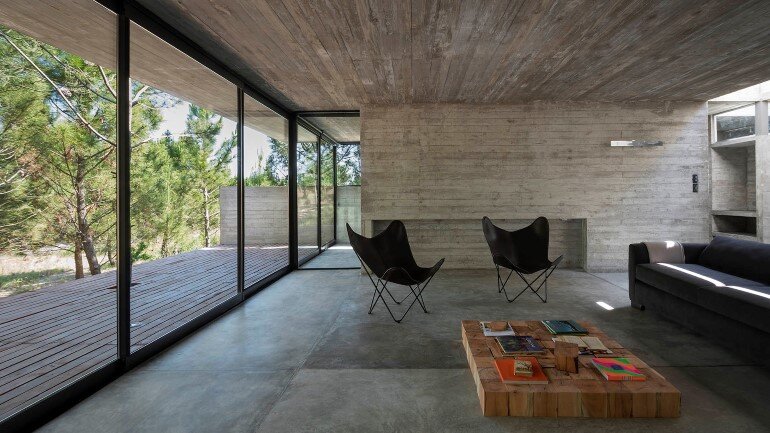 The central area of the social sector is bathed in sun through the glass prism which houses the main staircase. We incorporated linear cracks on interior walls that define the kitchen, seeking to generate on the surface of these walls the effect of the different sweeps of natural light throughout the day. Also, the bathrooms are lit by skylights on flat shower spaces. 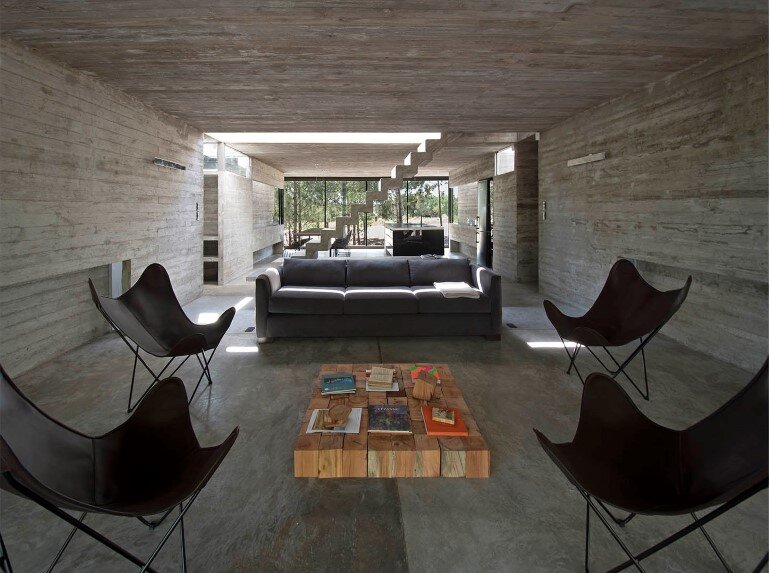 The supporting structure was solved by a slab supported by an inverted beam system supported on partitions located inside the plan, and metal columns arranged on the side enclosures that are part of the aluminum enclosure. In order to emphasize the horizontality of the house and reduce its visual impact, both on the front and the rear, the structural beam system was set back from the enclosure, generating cantilevered slabs that offer shade.

From the roof, embraced by the tops of the pines, a quiet space for contemplation unfolds. Due to the transparency of the staircase, views in all directions can be experienced. Covered by a wooden deck and provided with a shower area and two adjoining pools, this elevated space stands as a terrace facing the sea.

In the middle of nature, we laid out a built, open box, constructed in such a way that allows the outside to flow out, in and out, thereby making it part of the environment, merging and vibrating in harmonic consonance with it. Through its spatial synthesis and the stripped nature of its materiality, we hope the house awakens feelings and enhances the senses of its dwellers, in this mystical exchange that sometimes arises between people and things. 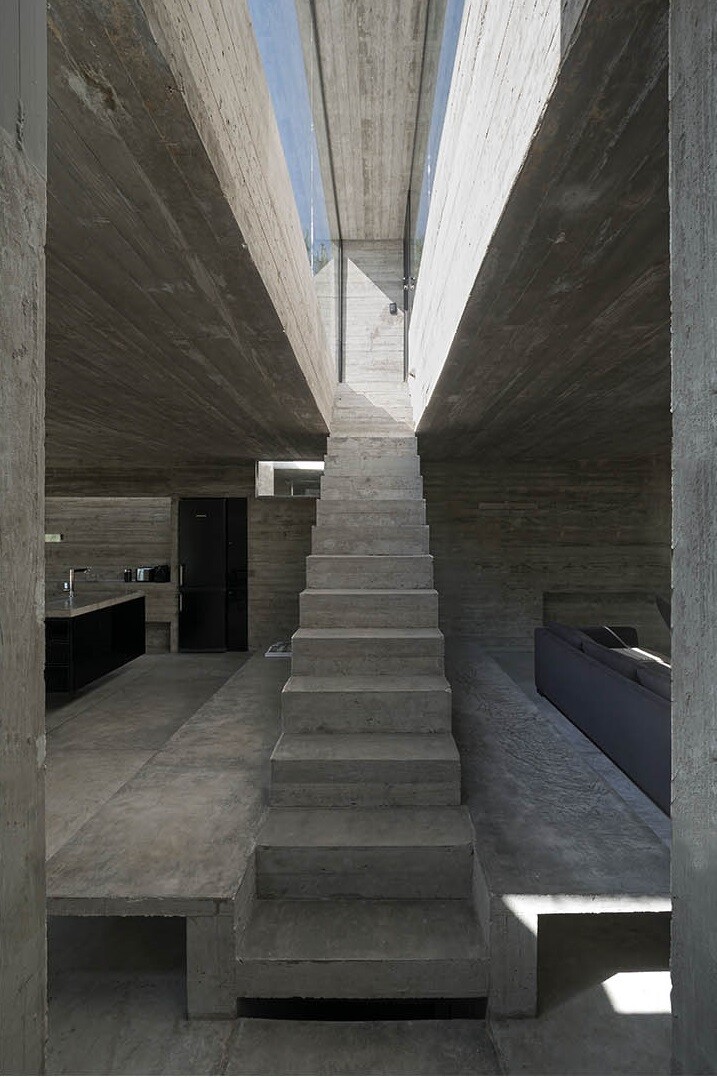 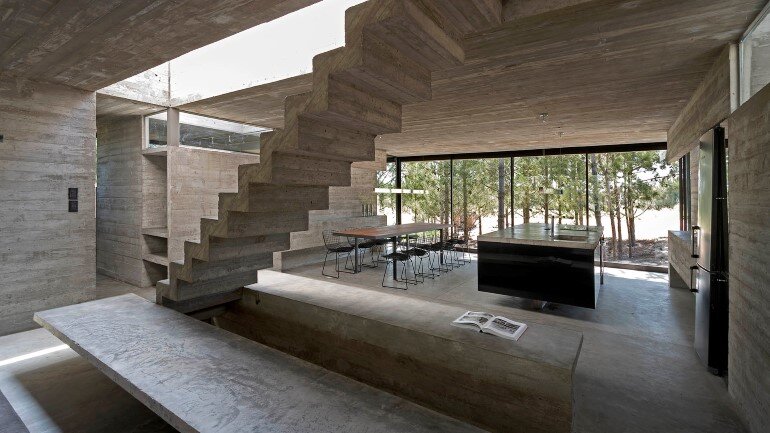 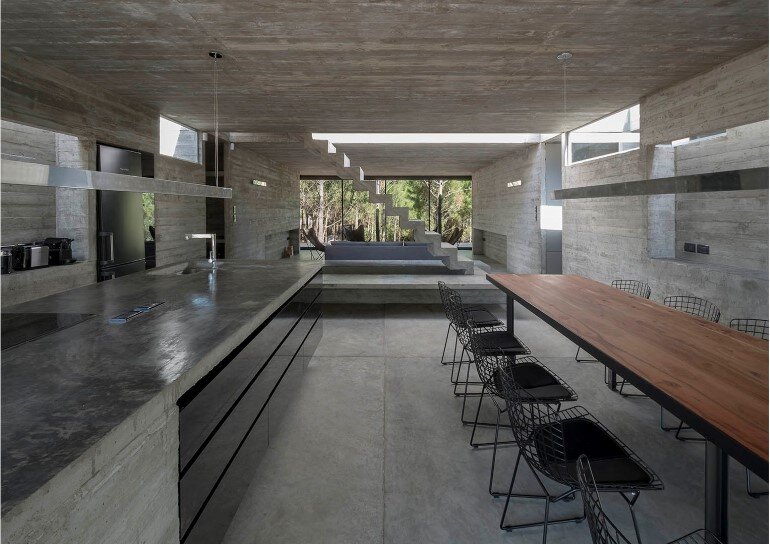 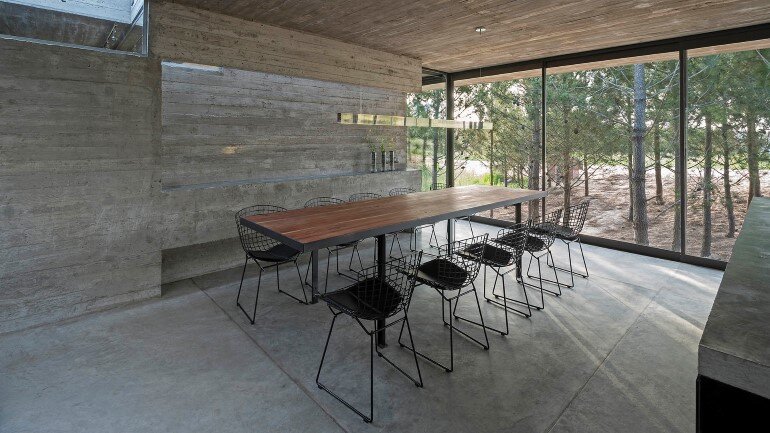 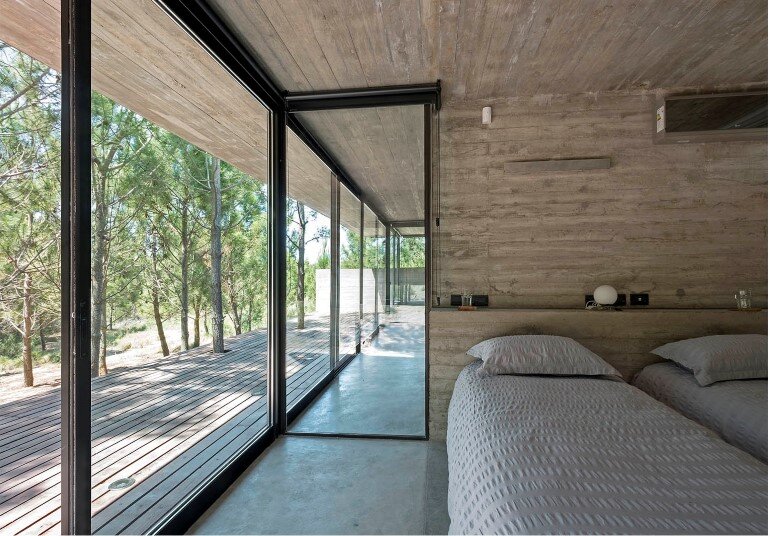 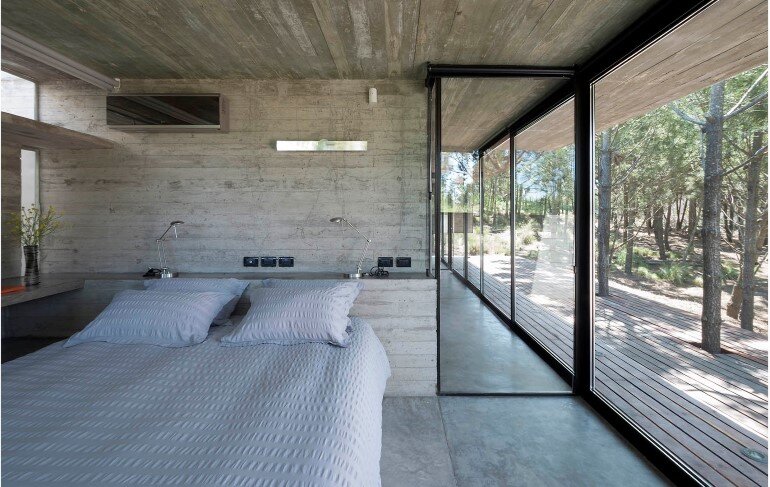 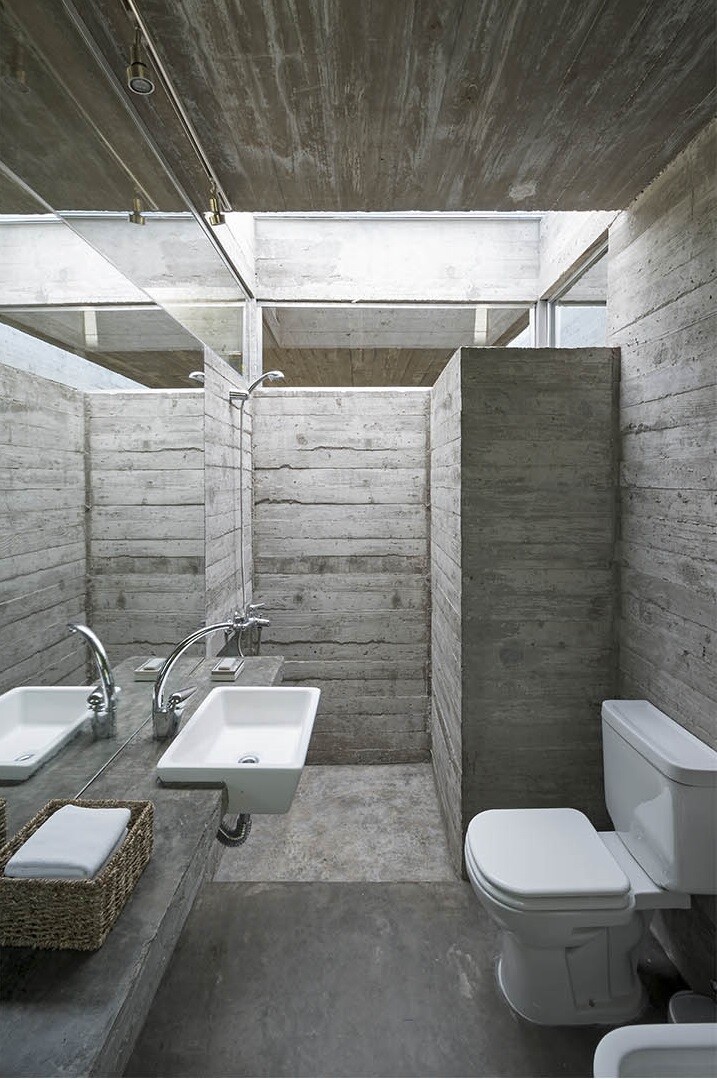 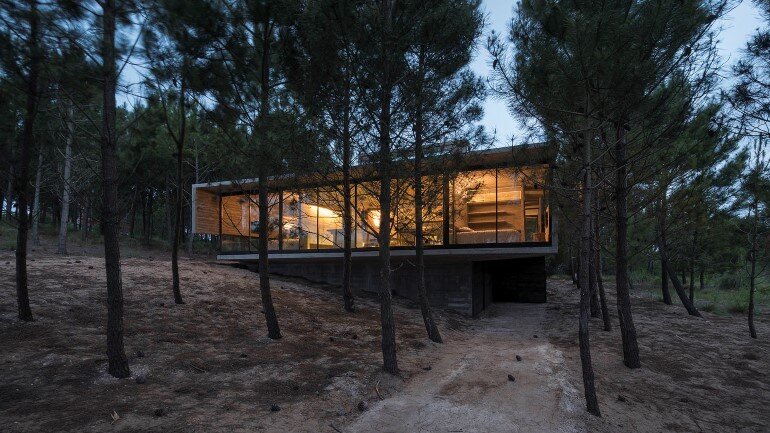 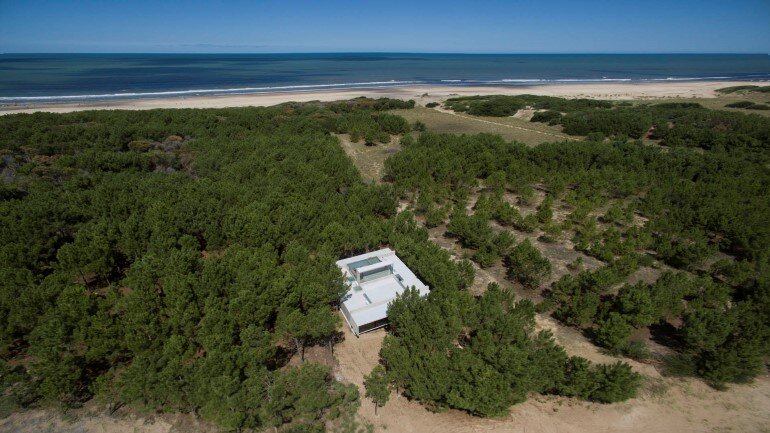 The Bunkers: A Heritage Structure Has Been Restored into a Unique Bed & Breakfast

Alterations and Additions to an Existing 60`s Residence: Writer`s House