TRUTH. Coffee Roasting – a fantasy world with a steampunk design, by Haldane Martin 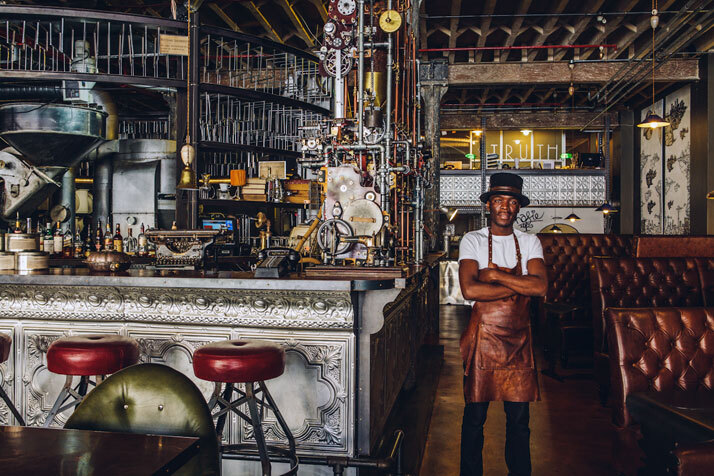 As real and absolute is the coffee offered by Truth to you, as science fiction is the location where you have to serve it. Out of passion for coffee and the assurance that you have to get the maximum enjoyment from serving this fine drink, the Truth Coffee Company from Cape Town has desired the arrangement of a cafe that would challenge all the conventions and patterns.

Designer Haldane Martin was contacted in order to achieve a spectacular interior design that would create a strong brand identity and contribute to the business promotion. The designer was inspired by the similarities between the modern machinery used in the coffee industry, from harvesting to brewing coffee and the steam engines from the nineteenth century. The cafe owner liked Haldane Martin’s idea to combine the two eras to make a fanciful design, Victorian and futuristic at the same time. Thus the steampunk style became the essence of Truth’s products philosophy. 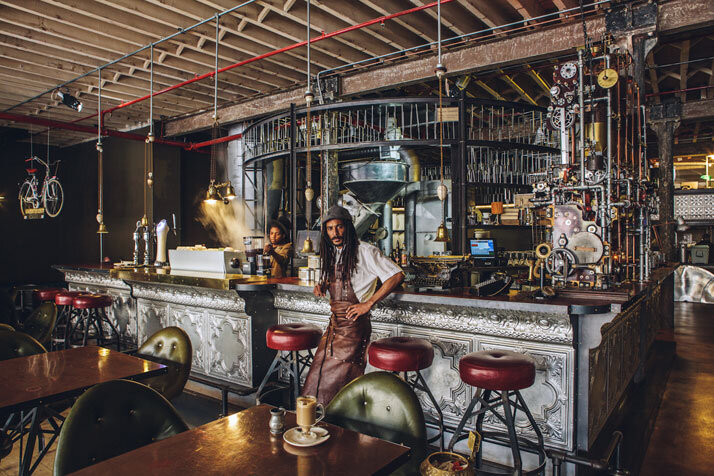 As an aside : Steampunk is a subgenre of science fiction which became prominent in the 80s – 90s of the last century. The works within this subgenre shapes an imaginary world that has completely mastered the use of steam engines. This subgenre is dominated by machines and numerous inventions similar to those described in the novels of HG Wells and Jules Verne. Steampunk works are often set in an alternative history of the 19th century’s British Victorian era or American “Wild West”, in a post-apocalyptic future during which steam power has regained mainstream use, or in a fantasy world that similarly employs steam power. Steampunk perhaps most recognisably features anachronistic technologies or retro-futuristic inventions as people in the 19th century might have envisioned them, and is likewise rooted in the era’s perspective on fashion, culture, architectural style, and art. 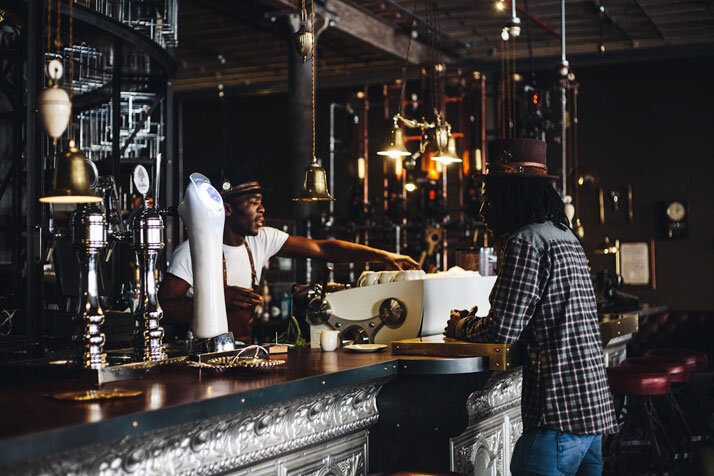 …fantasy world with a steampunk design

As you can see in the pictures, we encounter in the whole space, exposed pipes on the ceiling, old writing machines, cog wheels, sewing machines, and vintage phones. Interesting is the fact that the strange and enormous machine from the middle of the cafe actually works. Each assortment of coffee is stored in a cylinder assigned with a lever, the machine works on a crank handle and ratchet system. When one of the levers is open,  a chain reaction starts and it ends with the packaging of 225  grams of coffee. In the center of the room, there is the oven for roasting coffee. In order to give coffee a special flavor, this one is made of cast iron instead of steel. The entire cafe is decorated with machines, equipments and mechanisms that introduce you to an absurd world, worthy of Kafka. 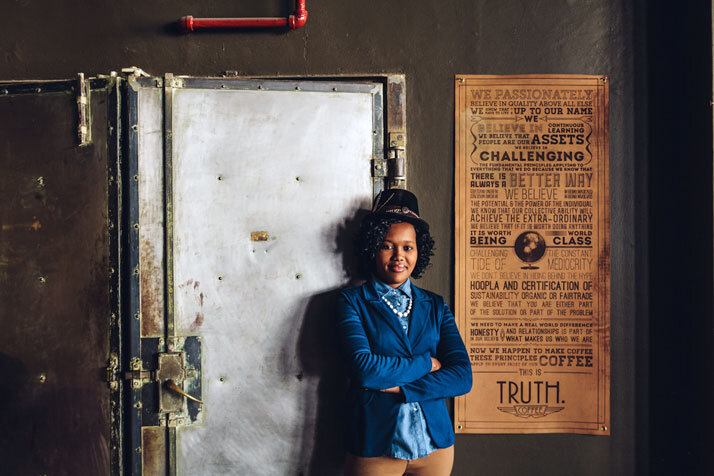 The floor is made of wood combined with metallic beams. The tables are either from wood, fixed on a framework made of interweaved pipes, or metallic, from thick steel plate or big cog wheels. The same design we encounter in the bathroom where we find extensible ancient mirrors, copper pipes, taps and levers specific to the Victorian era. The lighting system gives you the feeling that everything takes place in an industrial hall. The silver metallic color is very intense in order to increase the brightness and the feeling that you’re in a world of machines. The owners say that people were impressed by the steampunk design and that this decor attracts more customers than a regular café. Besides the first class coffee, the designed realized by Haldane Martin, makes Truth to offer you lots of interesting sensations. 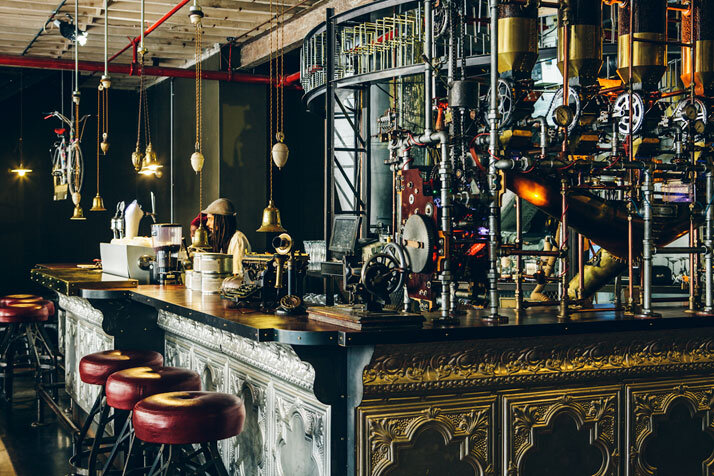 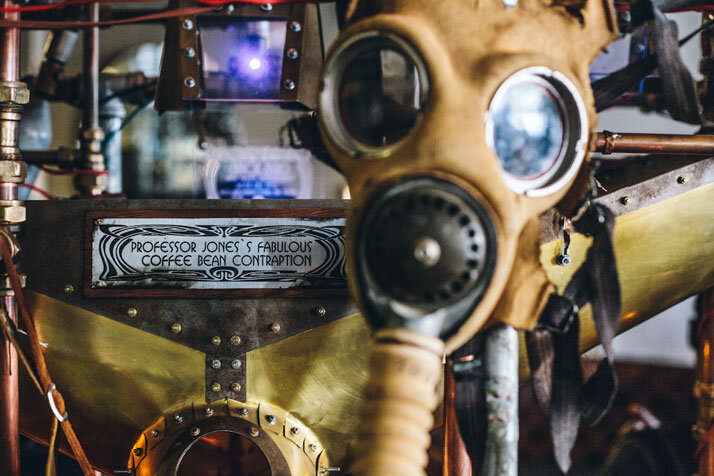 With a hand drawn sketch by Neil Architecture, Eco Edge Architecture + Interior Design was engaged to complete the Sketch Design Stage, tackle a protracted Heritage planning process to enable a reconstruction of the Victorian era house and full Architectural documentation of the residence including all aspects of the interior design.
Read more

The Little Art Studio is a 1400 SF addition to an existing contemporary stucco and glass residence. The addition of this project to the site provided a backdrop and bookend to an existing desert courtyard and a gathering area surrounding a fire pit.
Read more

The product of a gut renovation and second-storey addition to an existing brick bungalow on the south-west edge of the Knob-Hill Park in a residential neighbourhood in Eglinton East on the border between Toronto and Scarborough, Flipped House is a two-storey property designed for a developer looking to offer real estate buyers a modern, turnkey home
Read more

The owners of this Lakeview property wanted to create outdoor space for relaxing and entertaining. Their vision was to transform the yard to promote an open-air lifestyle that reminded them of California wine country, where they have roots.
Read more
© All rights reserved. HomeWorldDesign 2013-2020. All images are © each office/photographer mentioned.