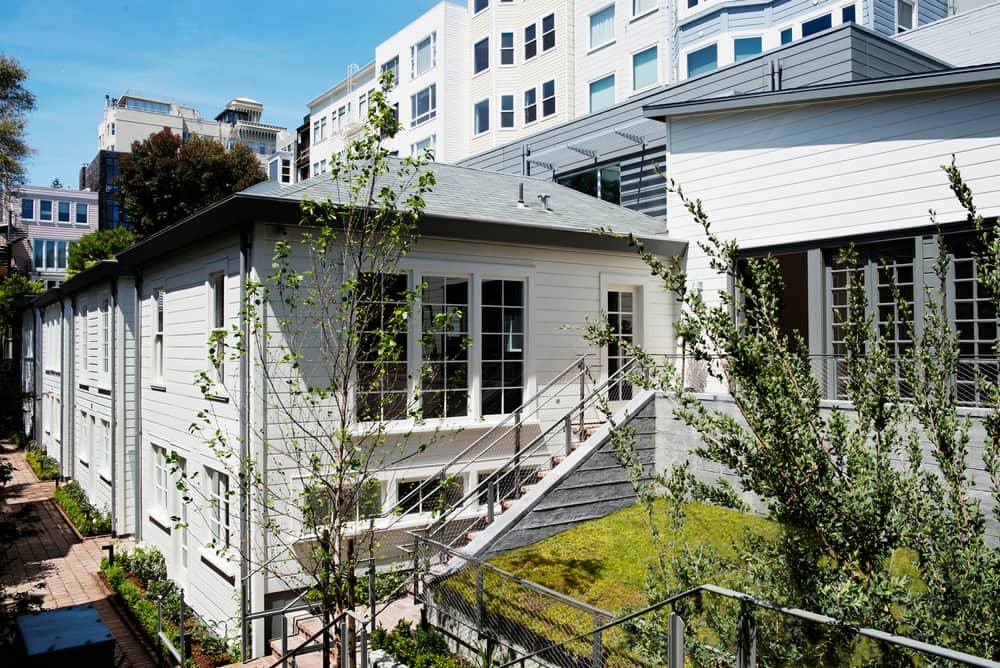 The four old wood-frame cottages along the garden mews at 1338 Filbert Street were in terrible shape in 2007—severely deteriorated, rat infested, and in complete disrepair. The asphalt roofing had failed, and the original wood siding was 60 percent gone. The paint was peeled off, dry rot had destroyed much of the framing, and the concrete foundations were cracked. Wooden doors and windows were missing panes and stairs were hazardous. Electrical wiring was exposed, plumbing was minimal. The garden was overgrown with weeds, and the brick hardscape was uneven. The original grape stake fence had been replaced with plywood. The property was a blight on the neighborhood. 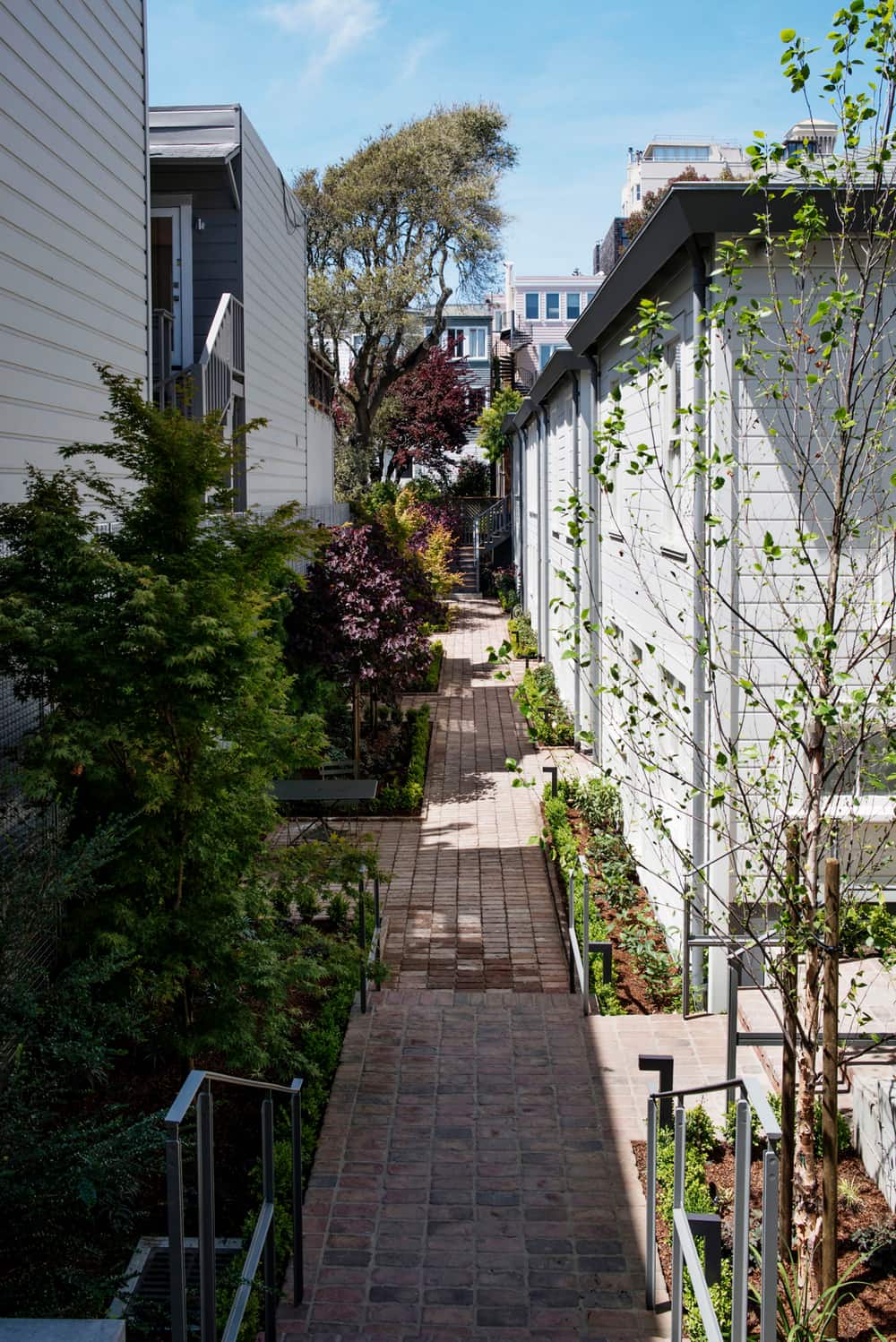 Nevertheless, a San Francisco couple who lived in the neighborhood were smitten by the cottages’ charm. They first noticed them on a stroll one evening, fell in love at first glance, and immediately saw the potential. The pair had some experience doing renovations, which gave them the confidence to purchase the site, in 2007, with the intention of doing a simple upgrade—sprucing the place up a bit for themselves and their friends, maybe adding a garage. Ten years, many approvals, a few lawsuits, and an ambitious construction project later, the couple admit the project took them on a longer and far more complicated restoration journey than they could ever have imagined. In the end, though, they say that the revived Filbert Cottages, combining the appeal of historic San Francisco period architecture with technically up-to-date details and contemporary design, are everything they dreamed they could be on that fateful walk. 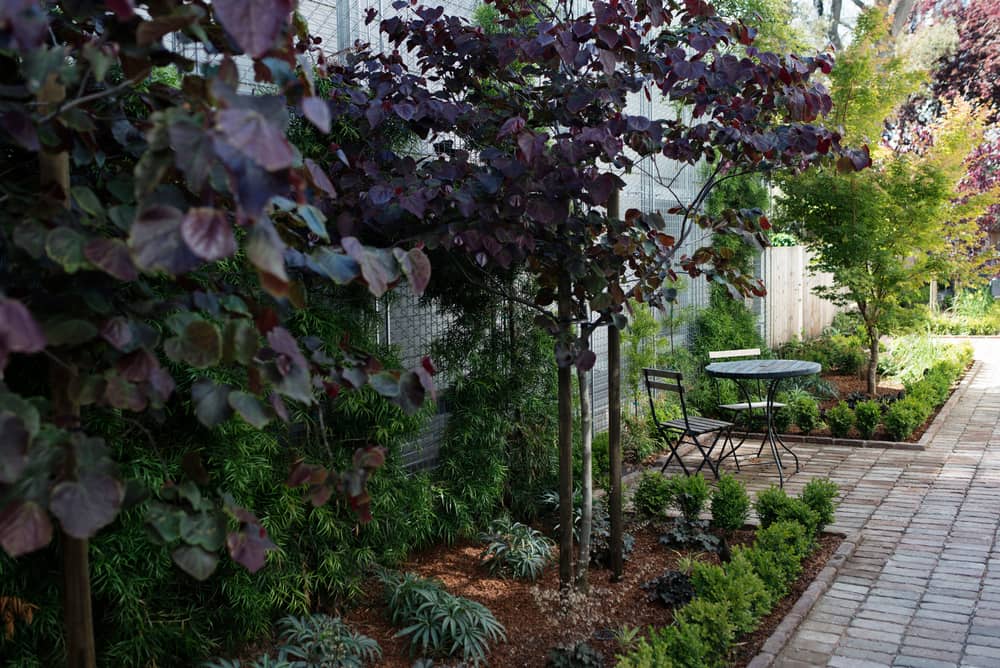 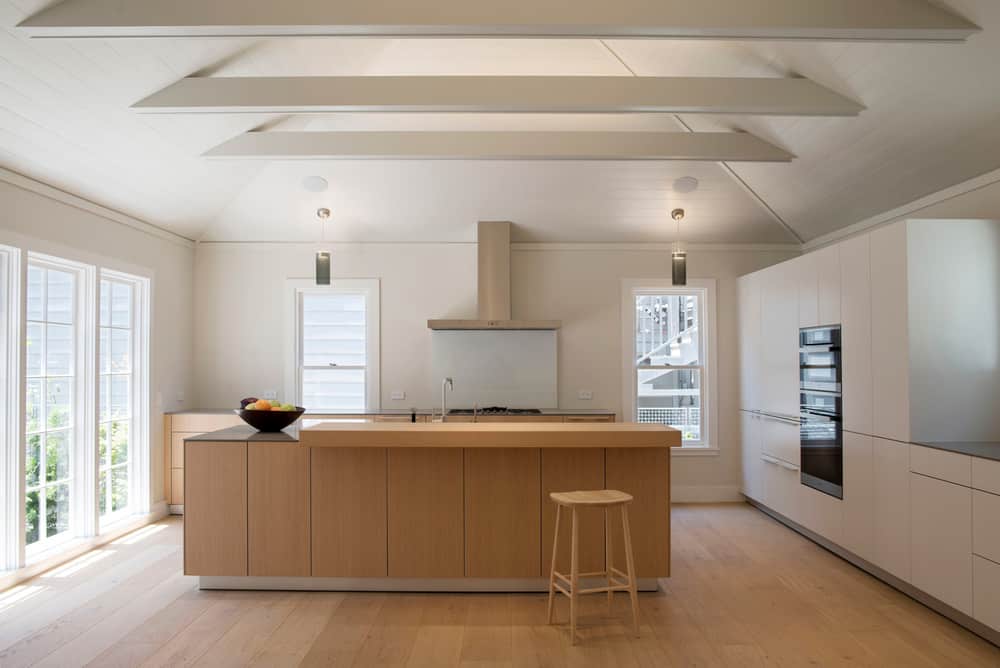 The Filbert Cottages were built as modest rental housing by William Bush during the construction frenzy that followed the 1906 earthquake. The cottages are arranged in a row perpendicular to the street, accessed by a deep, narrow garden, and their 20′-by-30′ footprints, hipped roofs, and distinctive simplicity are exact matches to other earthquake cottages built at the time that are scattered throughout San Francisco. The cottages became home to many residents in the following years, including one renter, Marian Hartwell, who in 1946 became the second owner of the property. A professor at the California School of Fine Arts known for color theory, Hartwell added the shed-roofed studio that forms the courtyard near the street, and she established the School of Basic Design and Color there in the 1950s. Over the years, the cottages were subdivided into as many as ten apartments and began their descent into deep disrepair. 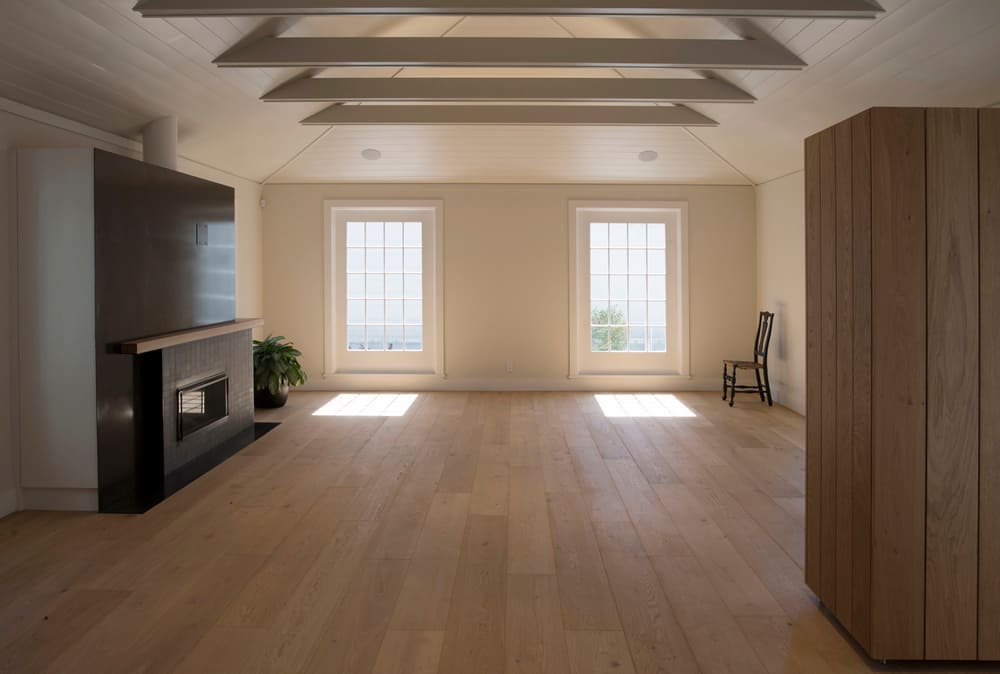 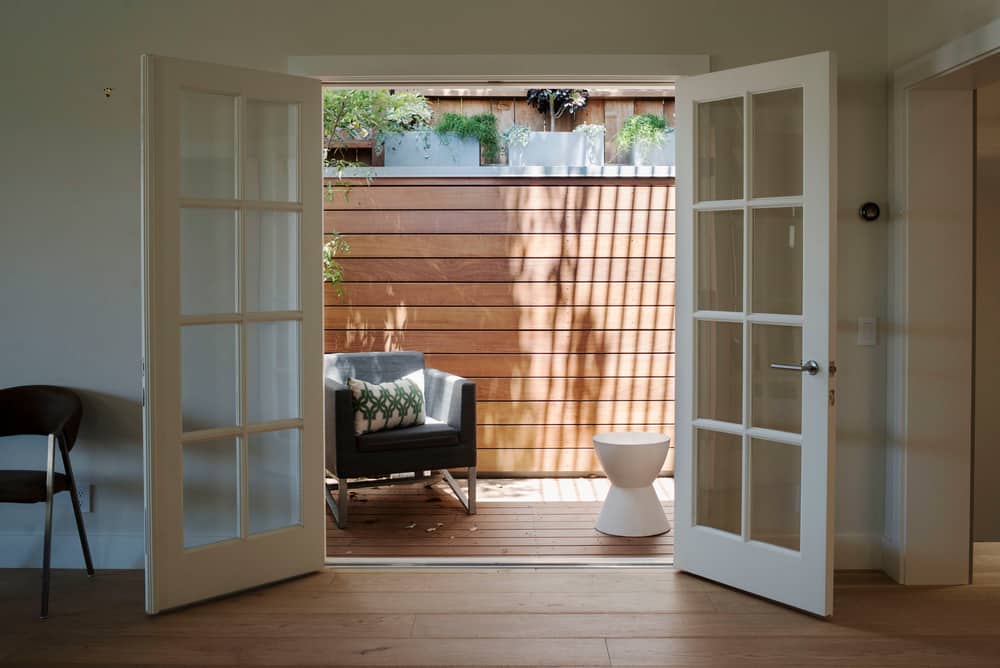 Around 2003, a controversial development proposal for the property resulted in the cottages and gardens being awarded San Francisco landmark status, in order to ensure that their character would be preserved. After the couple purchased the property, they hired Buttrick Projects Architecture+Design to tackle the complex job of preserving, restoring, and updating the site. It took five years of planning and another five years of construction, but in the end, the cottages, now four condo units totaling 12,000 square feet, have been preserved and re-imagined for a new generation of residents. During the construction, the team managed to preserve much of the remaining historic siding, single-paned wood windows, brick pavers, and original framing. Despite all the changes required to meet current codes and provide desired enhancements, the original character and charm of the cottages and landscaping remain intact and have been given new life. 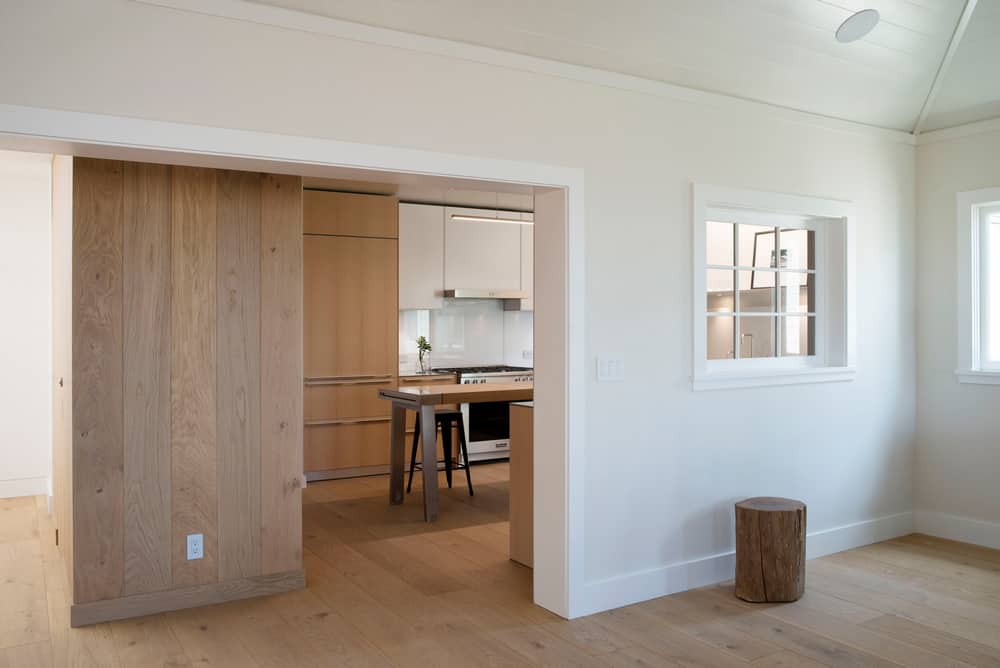 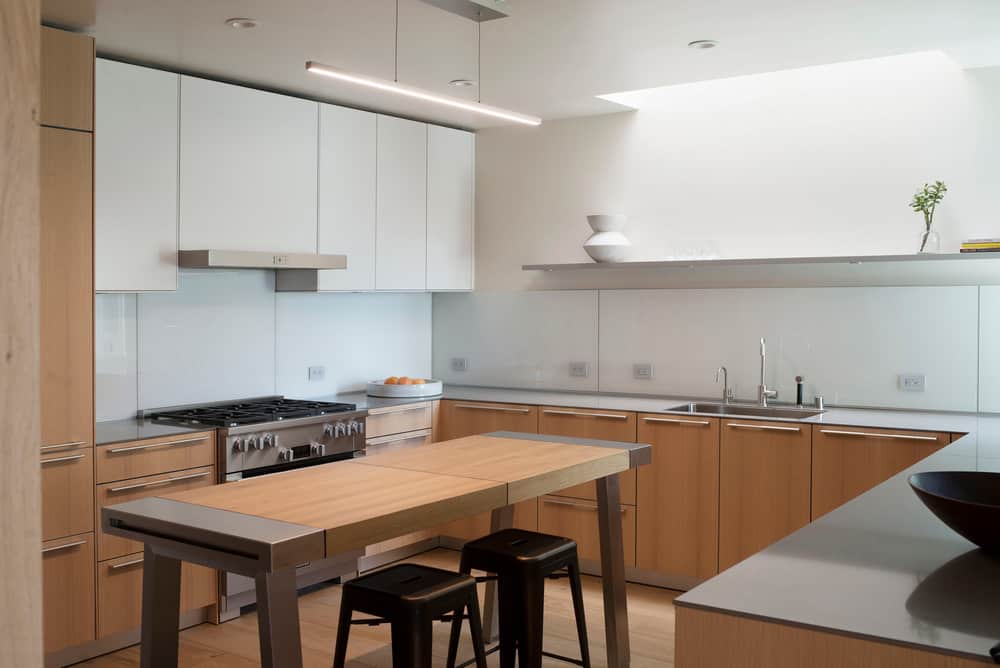 In addition to substantially rebuilding the structures to address seismic and complex waterproofing issues, the work on the property included removing a motley collection of additions at the back of the cottages and replacing them with a three-story zinc-clad addition, made possible by the construction of a tieback-reinforced gunite retaining wall running the entire depth of the lot and rising to 40 feet at its highest point. A zinc rainscreen envelope on the addition provides a maintenance-free skin in visual contrast to the wood siding of the cottages themselves. Though taller than the original buildings, the addition remains tucked beneath the uphill neighbors’ views and barely visible from the street; it also adds critical space and provides a backdrop that allows the cottages to shine. Beneath the cottages and the addition, a new concrete podium foundation houses an ample underground garage, accessed by a car lift, that provides eight new parking spaces. The planted sloping roof of the vertical lift recalls a garden planter that existed in the same area in the original layout. 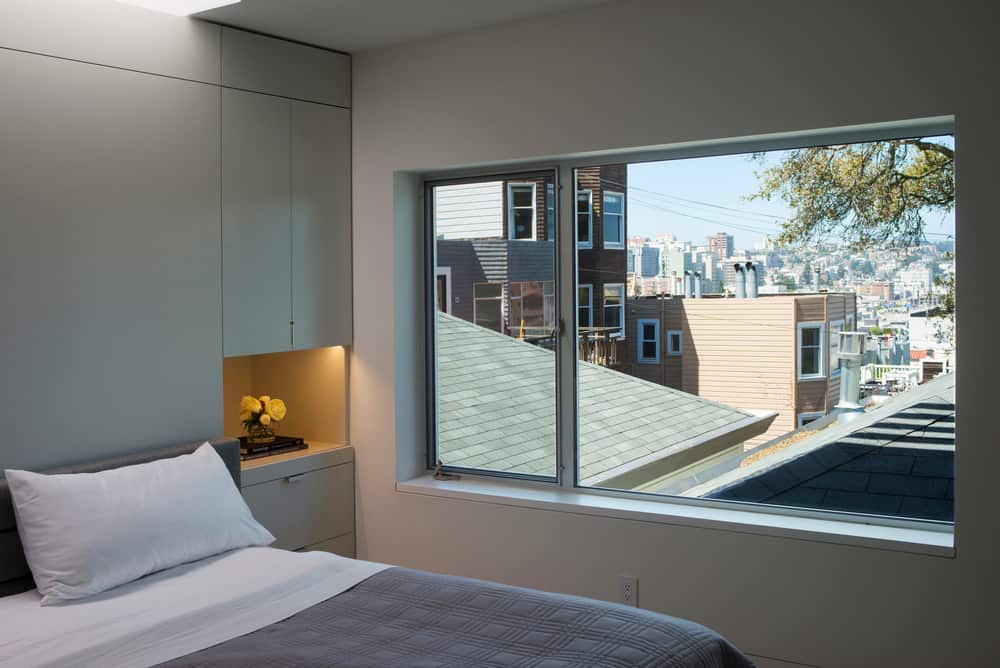 Within the cottages, each main living space grew to three stories, connected by steel-and-oak stairways, with three bedrooms and four baths. The living rooms gained cathedral ceilings and individualized fireplaces. Details include shiplap paneling, wide plank French white oak flooring, Venetian plaster walls, and furniture-grade cabinetry. The kitchens, by Bulthaup, are lit by split skylights that also bring natural light into the main bedroom, above. The effect is clean-lined Modernism that projects livability and welcoming warmth along with design integrity. The neatly restored shared historic garden, subtly revised to accommodate the car lift and lined with plum trees and boxwood hedges, is visible to the pedestrian willing to take a moment on their climb up Filbert Street to peer over the grape stake fence. The reward is a glimpse into a revitalized urban oasis from the city’s past. 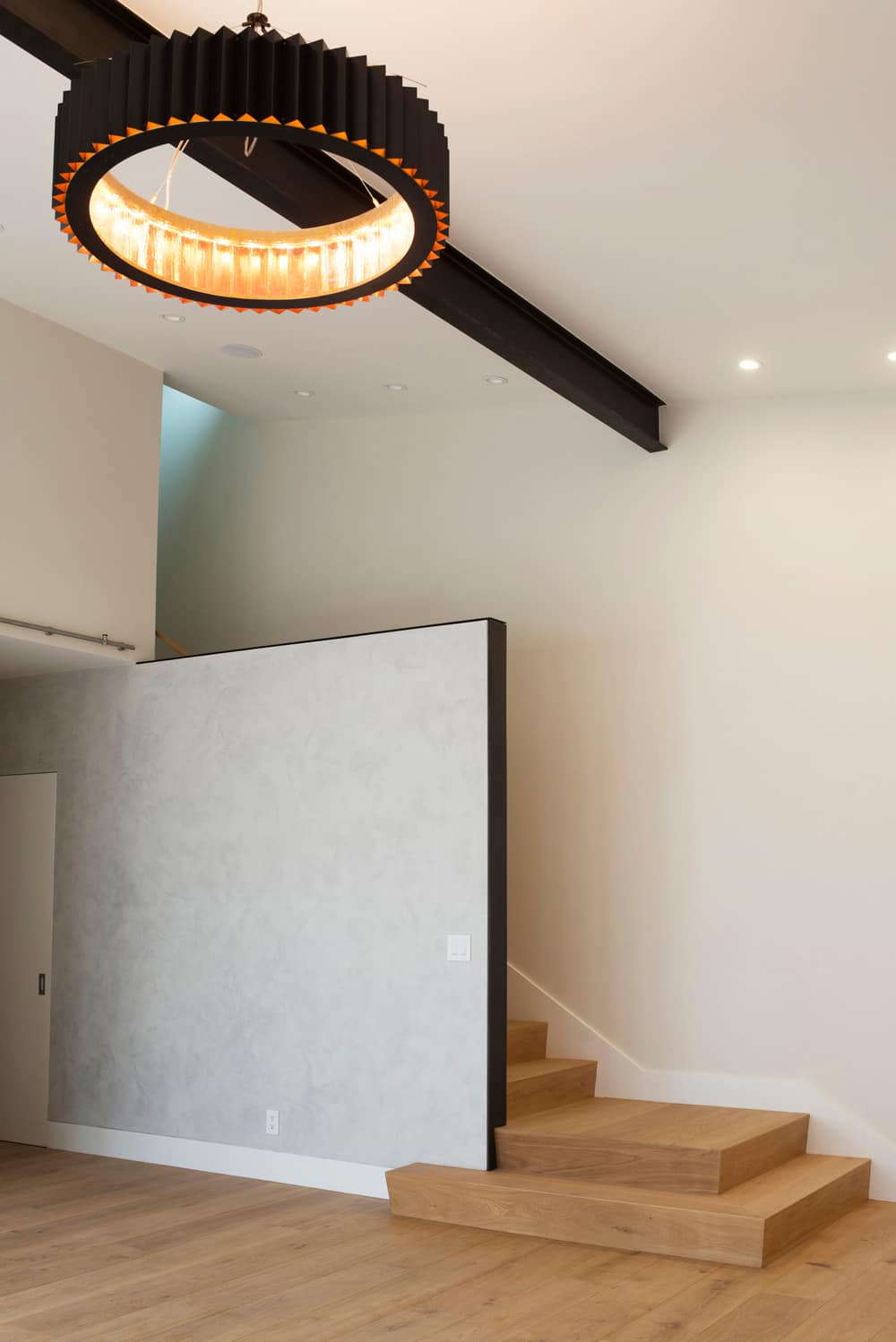 The Filbert Cottages demonstrate how outdated older buildings, even those of modest pedigree that are severely damaged by age, can be rehabilitated and made beautiful, useful, and completely suitable for contemporary life with the help of an experienced designer and a savvy team of construction specialists, engineers, and landscape architects. The couple ended up putting the condo units on the market, and they sold quickly—proof that there is an avid market in the city for unusual properties like this. The imperfections and patina of the past add texture and character to the finished project and, in turn, to the people who live there as well as to the city as a whole. 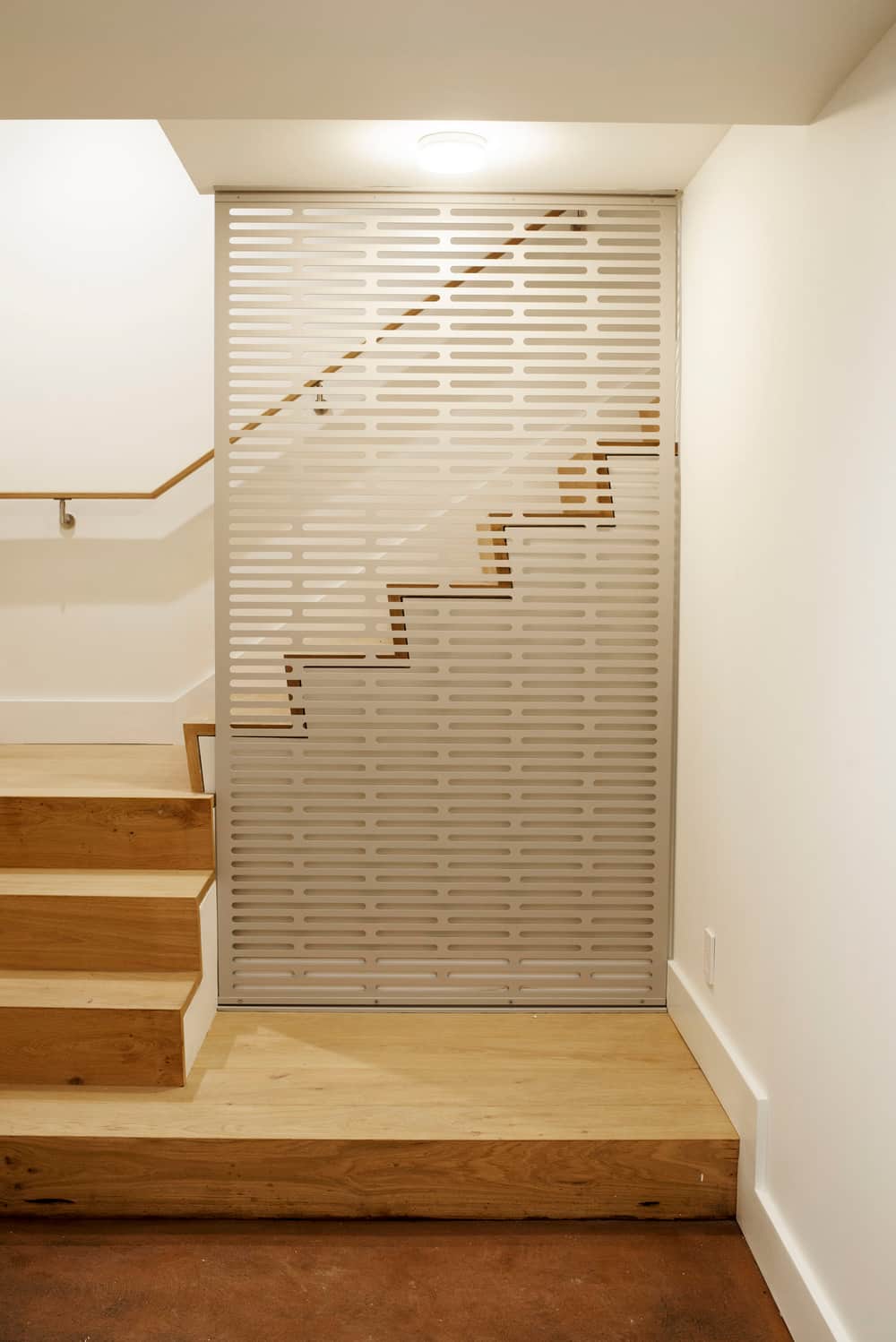 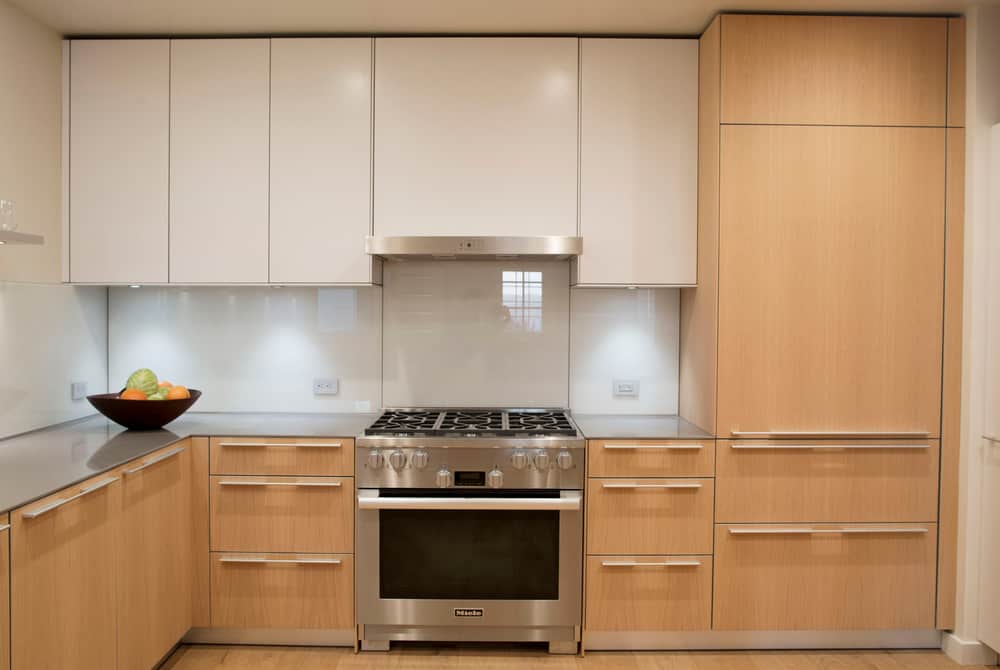 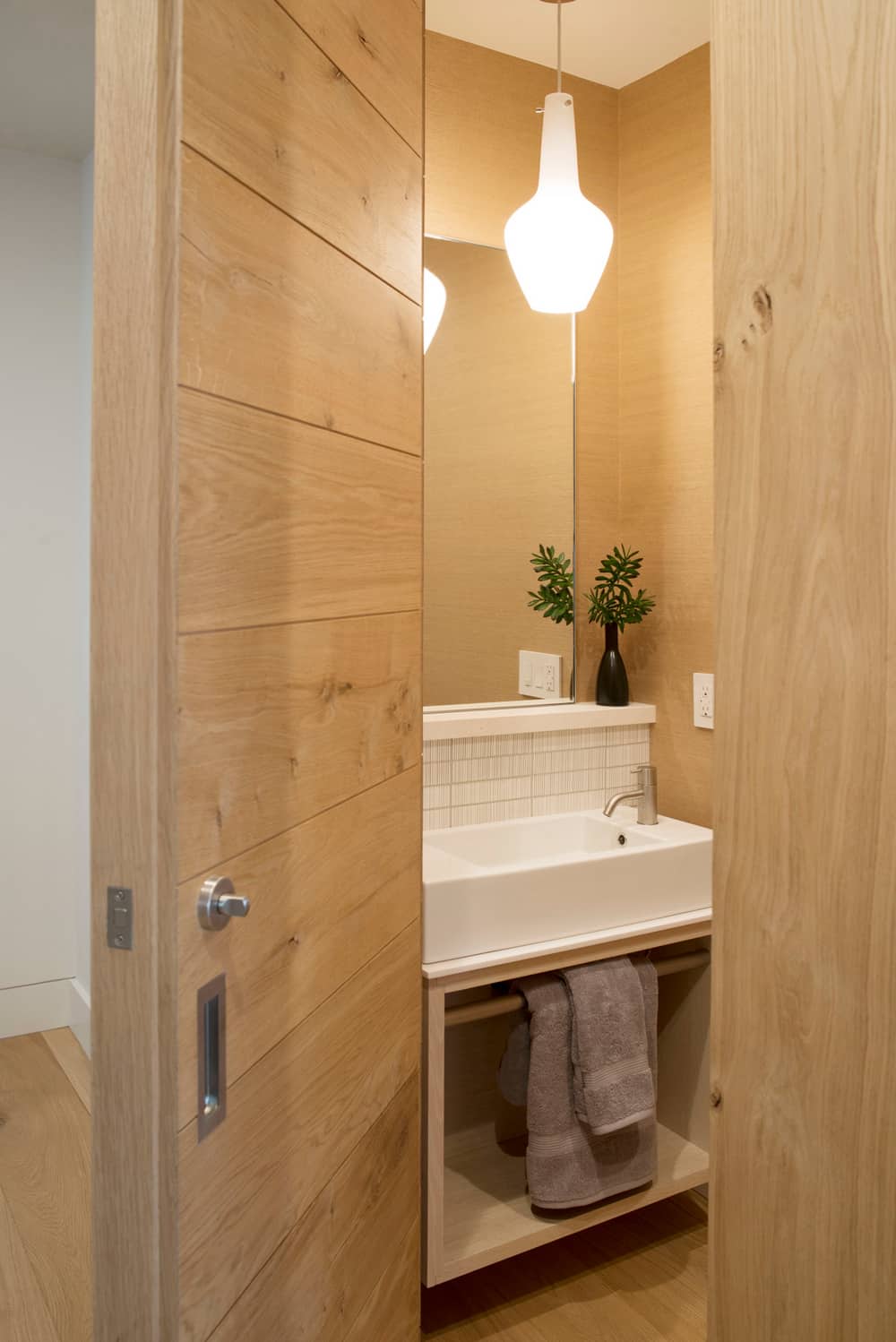 Refurbishment of a 35 sqm Vacation Apartment on Polish Seaside

This Renewed Edwardian House Respects its Architectural Past

Integral Reform of an Apartment of 123m2 in Avilés, Spain

Federation Cottage Transformed into a Two-Level, Contemporary House in Melbourne