A Galilee House Integrated into the Pastoral Surroundings 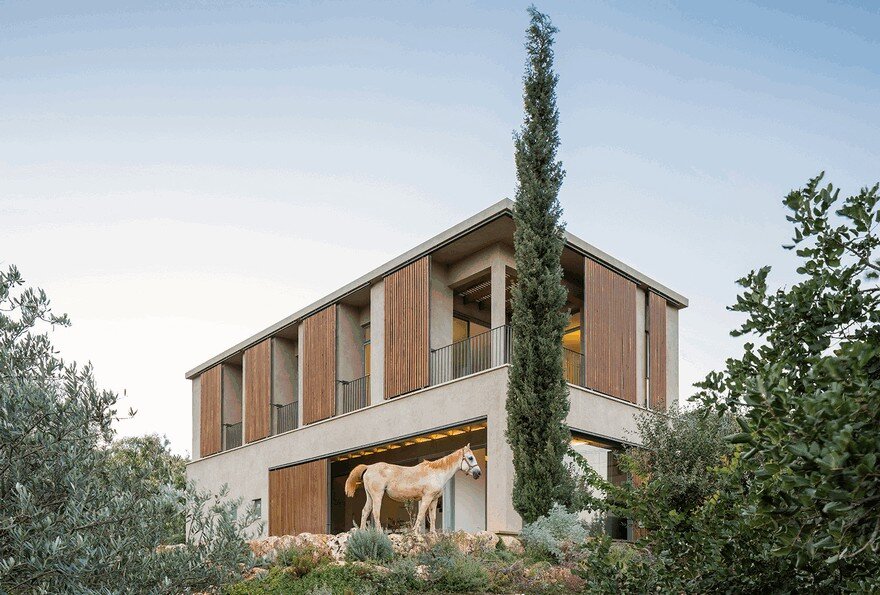 When Golany Architects approached the design of this Galilee house, they took upon themselves the challenge of maximizing the potential of the lot at the edge of a village, overlooking the open wide landscape, adorned by the Sea of Galilee. 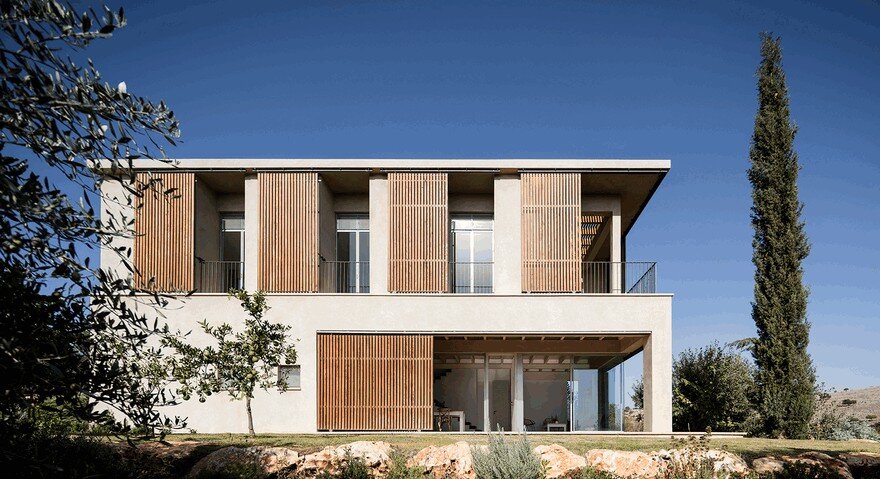 The desire was for the residence to embrace and engage with the ancient landscape. Therefore, it was important to maintain an unobstructed continuity between the lot and its surroundings. To determine the exact level of the house, the architects and clients went to the empty lot, where they climbed a ladder to check for the level at which the Sea of Galilee can first be seen. The level of the house was then carefully determined for a minimal rise above ground level to provide far views, while still avoiding any retaining walls or barriers, despite the mountainous terrain. 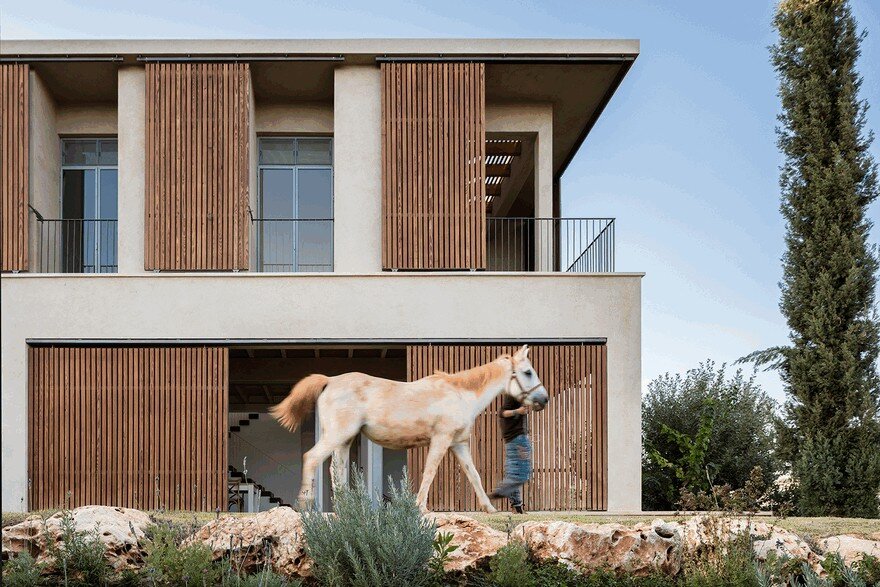 The living areas which are located on the ground level, are continued by the garden that seems to extend towards the horizon, through the fields, and all the way to the Sea of Galilee. The actual size of the lot is only 500 sqm, so in order to leave enough living outdoor area, the house was split into two floors. The bedrooms and family room, adjoined with a pergola covered terrace, are on the first floor, where they are open to the sweeping view above the treetops. 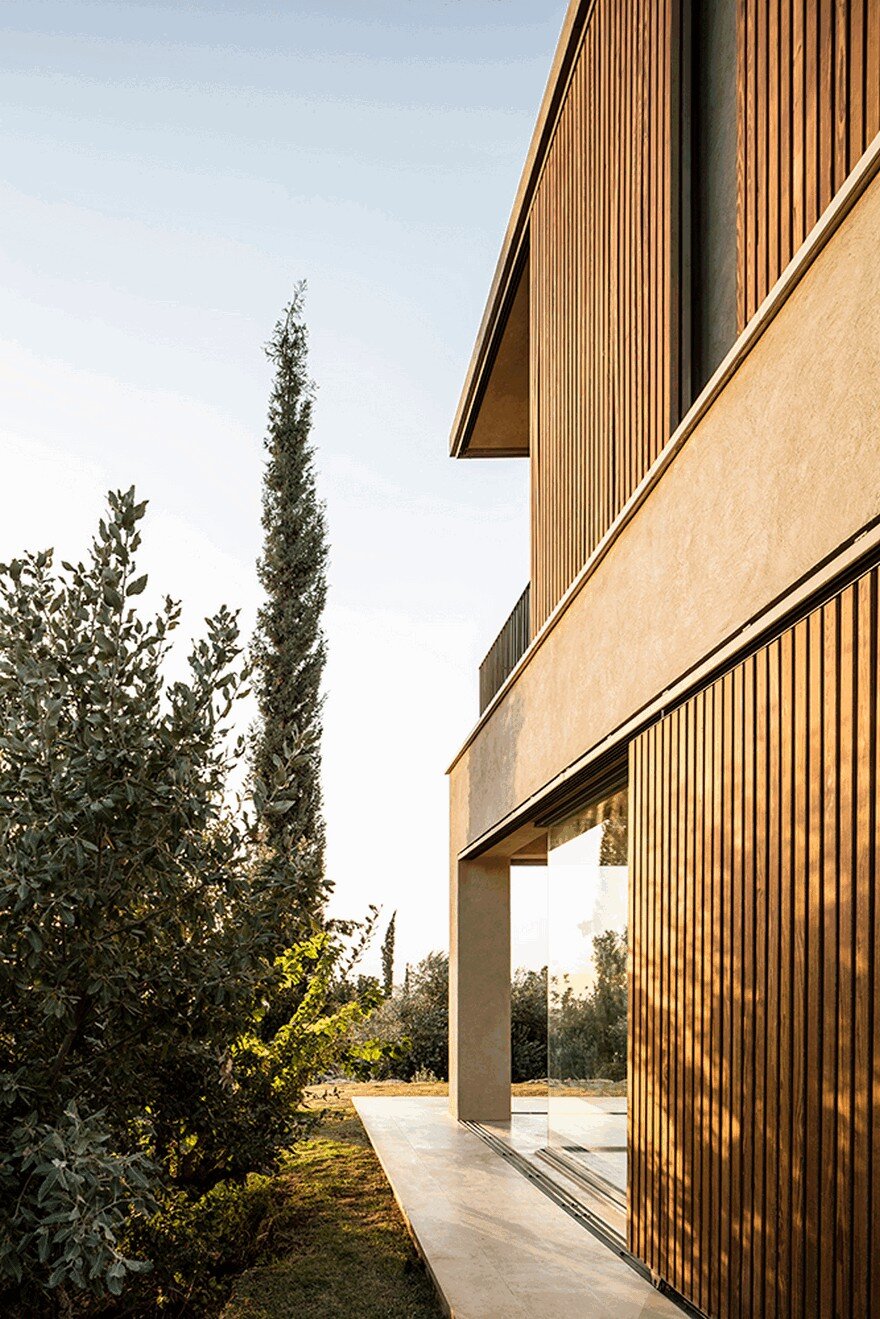 Sustainable and environmental considerations were taken into account. The generous openings facing the view to the south and east, require the provision of shading and filtering against the intense sun, which is provided by the wooden shutters. The shutters slide in adjustment to the position of the sun. 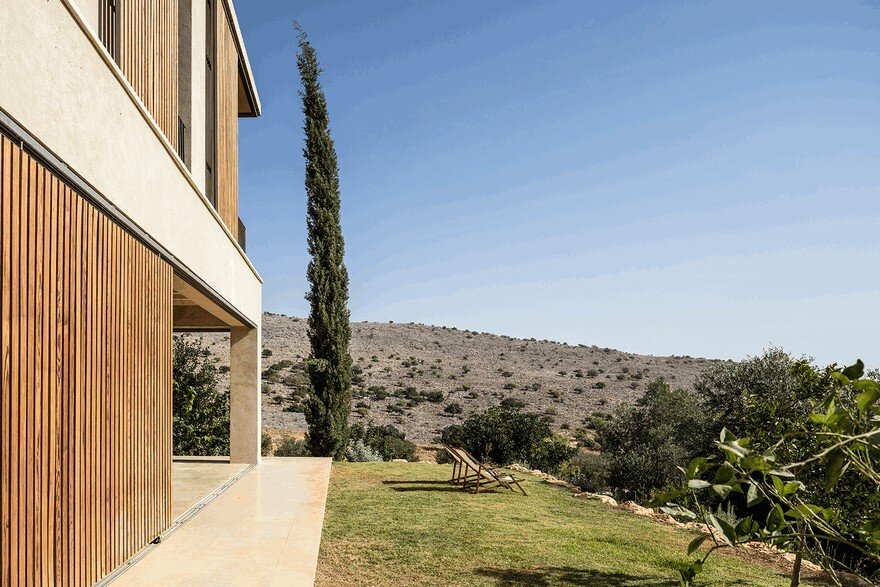 The shutter lattices, as typical of Mediterranean mashrabiya, block views inwards and maintain privacy, while allowing one to enjoy the scenery from the inside. The light rays penetrating through the slits create a magical, ever-changing atmosphere in the interior anytime the sun illuminates the shutters. 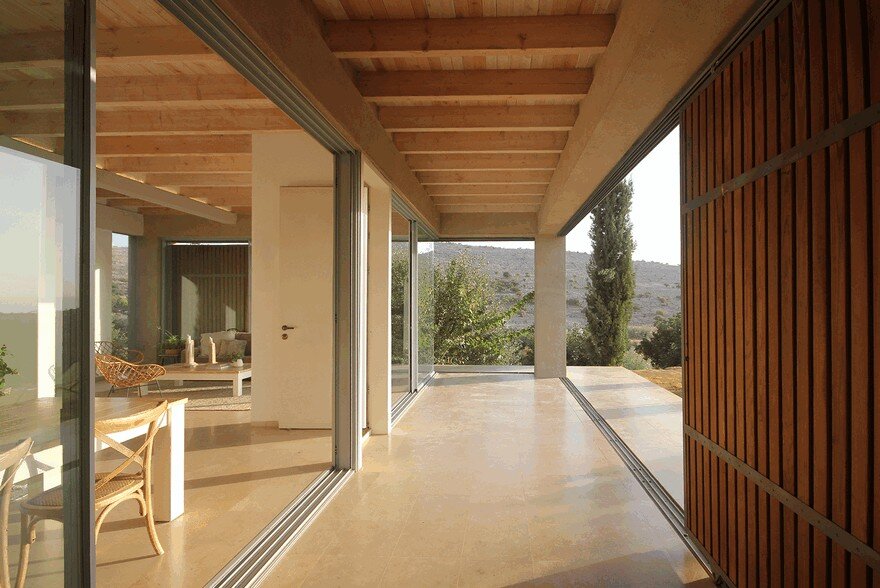 The large windows and doors on both levels of the house are recessed from the shutters’ outer façade. The double-skin envelope, created that way, significantly improves the climate control of the house and thus – as the clients indicated – despite the heavy heat, typical to this region of the Jordan Valley slopes, the house stays cool and pleasant even during the hottest days of summer. 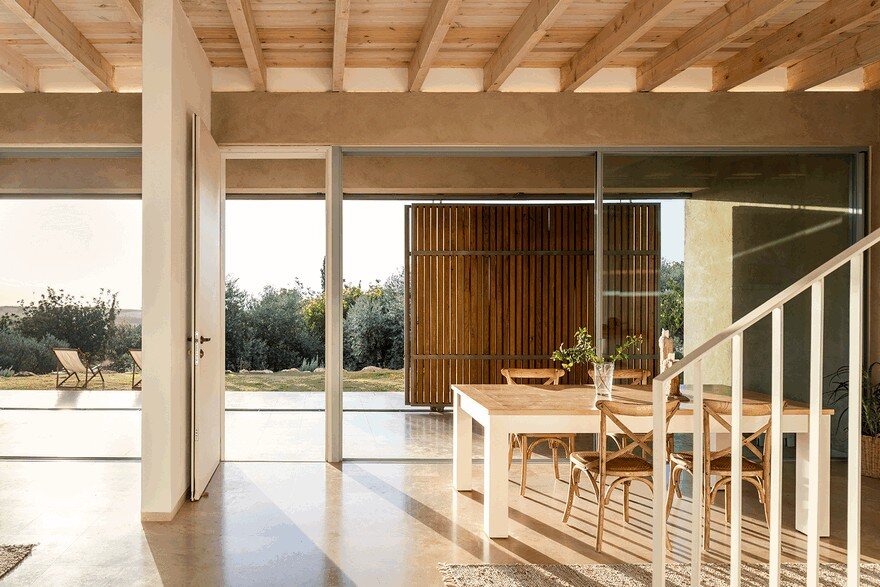 Between the glazed doors and the shutters, intermediate spaces are created – kind of outdoor rooms – enabling to sit outside in the fresh country air while still maintaining the privacy and intimacy of the inside. The intermediate spaces can be closed by the wooden shutters, rendering it an integral part of the interior, while at the same time being outdoors. At the ground level, the covered balcony that serves as an outdoor living room extends the living and dining areas, while an indoor-outdoor balcony on the first floor extends the family room. 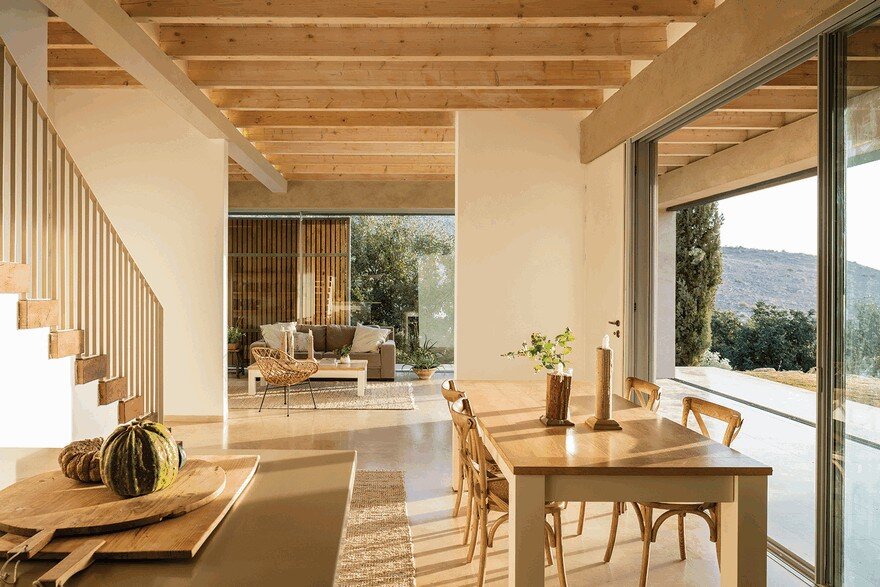 In the bedrooms, between the two layers of the house envelope – the windows and the shutters – small balconies are created. The balconies, with their vertical proportions – as a contemporary interpretation of the traditional balcony – provide unobstructed continuity of the close view (the private garden), mid view (the village fields) and far view (the Sea of Galilee and the Golan Heights). Carefully positioned openings on the rear elevations also capture views of Mount Canaan and the old town of Safed.

The Galilee house aims to integrate into the pastoral surroundings. The yellowish-brown ridge at the front, the rugged soil and the Olive and Carob groves around it where horses graze, led to the choice of the materials: matching colors for the cement textured plaster and the timber shutters outside, light brown stone for the paving inside, and the wooden ceiling with its massive beams.

The cypress tree at the corner of the lot, the oak tree by the living room window and other mature trees were preserved during construction, and the house was built among them. Amid the rocks, rosemary, lavender and spice plants with local fragrance were planted. The Galilee house was designed to capture the ambiance of the environment and was built out of elements that originate from it.

150-Year-Old House Transformed into a Bright and Fluid Space

Located in the St-Henri district of Montreal, this project involves the conversion of a duplex into a cottage for a young professional couple wishing to adapt the layout to their needs. The main challenge : to transform the small, dark and enclosed rooms of this 150-year-old home into a bright and fluid space.
Read more

This sustainable smart house is one of opposites; breaching the gap between last century's construction methods and next century's technology and ideology.
Read more

Quintana 4598, at the corner of Arias street, is a building of 12 functional units designed by iR Arquitectura. The structure is modular, easily...
Read more

A dismal old book warehouse is completely transformed into a bright and airy residence-atelier with a double apartment and patio-verandah plus a separate additional apartment unit.
Read more

The Venice residence is broken into two staggered volumes to maintain sightlines to the neighborhood and street. Its peaked roofs are a nod to Venice's traditional craftsman-style cottages. Not only do they make the house less imposing; they afford extra-high ceilings in the master suite.
Read more
Martin Architects

This recently restored modern farmstead was the last home and Studio of "Romantic Modernist" Architect Norman Jaffe. Located in the heart of horse and farm country, Jaffe's retreat was chosen for its wonderful serenity. We worked with the new owner, a local artist, to enhance the quality of the original architecture and maximize the dynamic experience of the home
Read more
Contemporary Houses

NF House was designed by Navot Rubin Architecture for a family with four children. The house has an area of 260sqm and is located...
Read more
Eco-Friendly Houses

Perched on the edge of an escarpment, the modest retreat is set on a small plateau of limited dimensions. Almost straddling the void, it runs along the top of the cliff providing a bird's-eye view of the Long Lake with the Appalachian mountains as a backdrop.
Read more