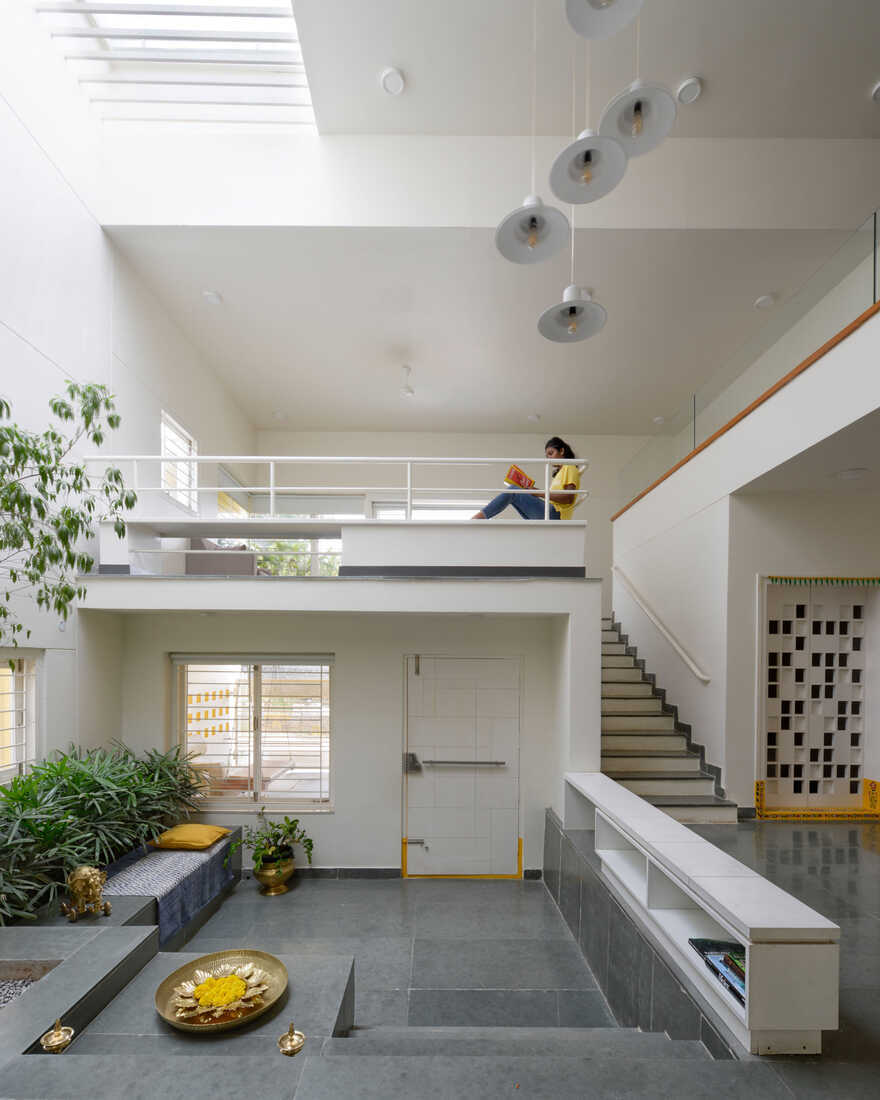 Hyderabad is one of the fastest growing cities in India. The old city is space stagnant and the development is rapidly moving towards and happening around the new city, which has the space to absorb it. The soaring land prices around here are a direct result of this. The families are tightly knit in India, often staying for generations together. The clients are one such family of three generations (and a probable fourth in the near future) moving to this new part of the city. The land parcels available here would mean they would have to depart from the spacious, horizontal lifestyle they were so used to before, and move into a more vertical settlement. 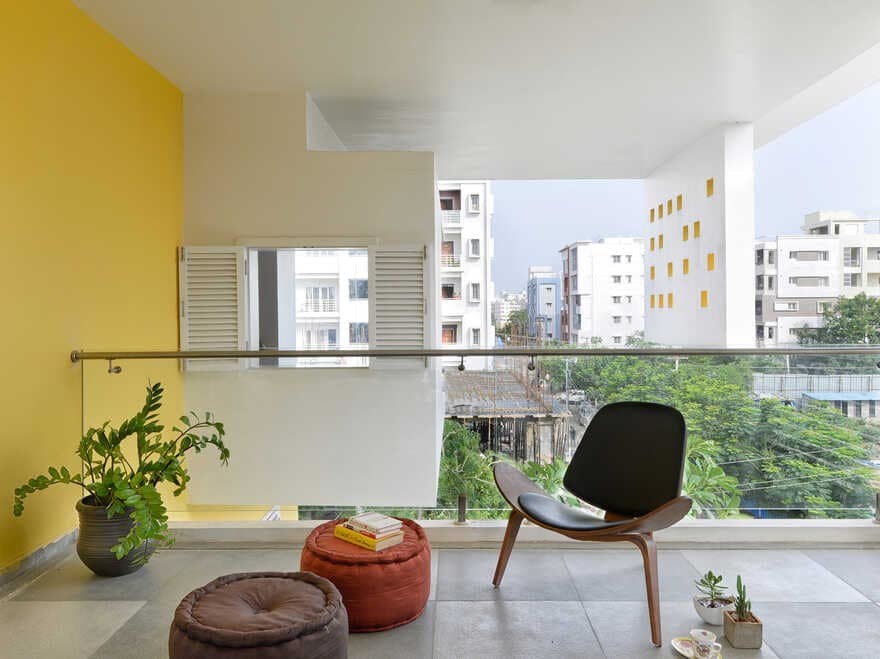 The site is a modest 60 feet by 75 feet, in a dense layout of multi-generational apartments five stories tall. It is abutted by roads on the North and West, these being the only sides not having buildings in close proximity. The idea since inception has always been to keep the connection between the generations alive now and in future. The general notion of an apartment is to allot privacy between its units. We had to mutate this idea into a model of apartment which provides privacy, all the while keeping the family connected. This was achieved by opening up living spaces into large open courts which are of double height in nature which offer connectivity between levels preventing social isolation with the family. These reduce the scale of the building visually and open on the corners with most frontage: on north-east and north-west. 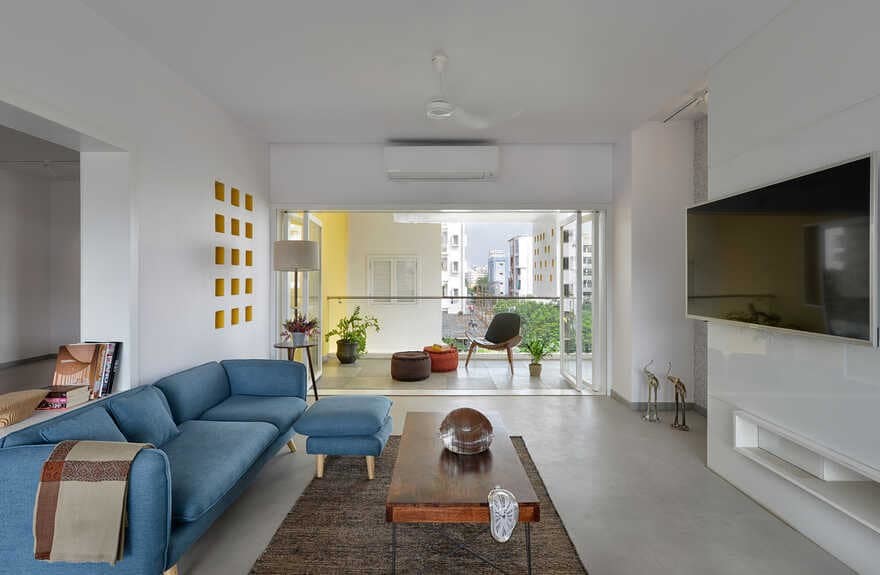 The stilt is left for parking and servant rooms. The oldest generation is allotted the lower most, first floor with the next one on the second floor. The youngest generation has the last two floors to themselves with the space left for a probable future generation used as recreation spaces for now. Every floor has access to a green court. These are covered with metal louvers and perforated walls to create privacy from adjacent properties. Through these spaces, one can walk out on to the balcony; converse with a family member reading paper, all the while taking in the aromas of food being prepared in the kitchen below. These courts also have large projections in them which act as spaces for yoga, waiting, prayer or dining; depending on the level. 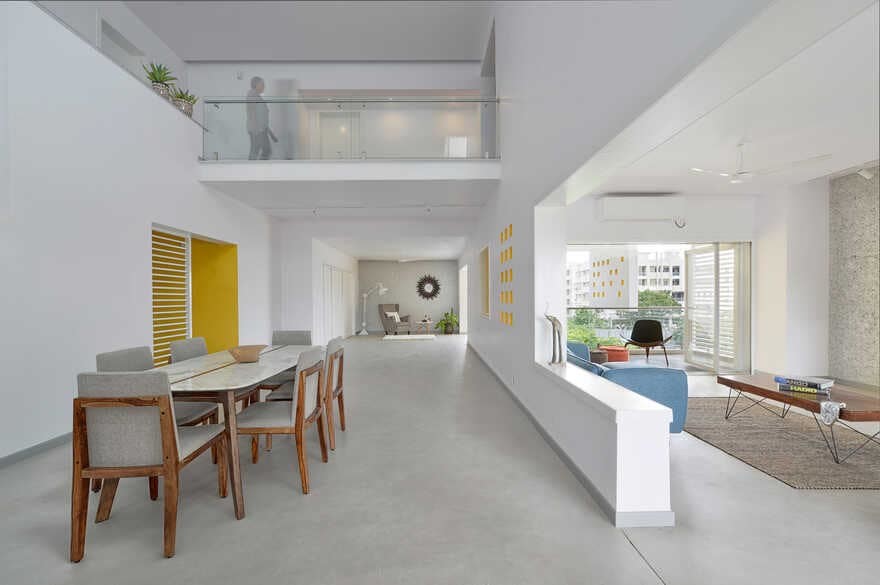 The lower two and upper two levels are open within themselves also, connected through large double height central spaces. These contain the internal staircases leading to the upper level in each. The walls are kept stark white to enhance the spaciousness, with a turmeric yellow or earthy orange highlighting some walls to create visual depth and contrast. The doors and windows are Indian teak deco painted white. The vast polyurethane based concrete flooring has lighter pigmentation for lower and darker pigmentation for the top two floors. The furniture is kept to the bare minimum to avoid cluttering inside. Most of the interior palette is light in nature except the bedroom on the fourth level with wooden flooring which has a sky lit court of its own. 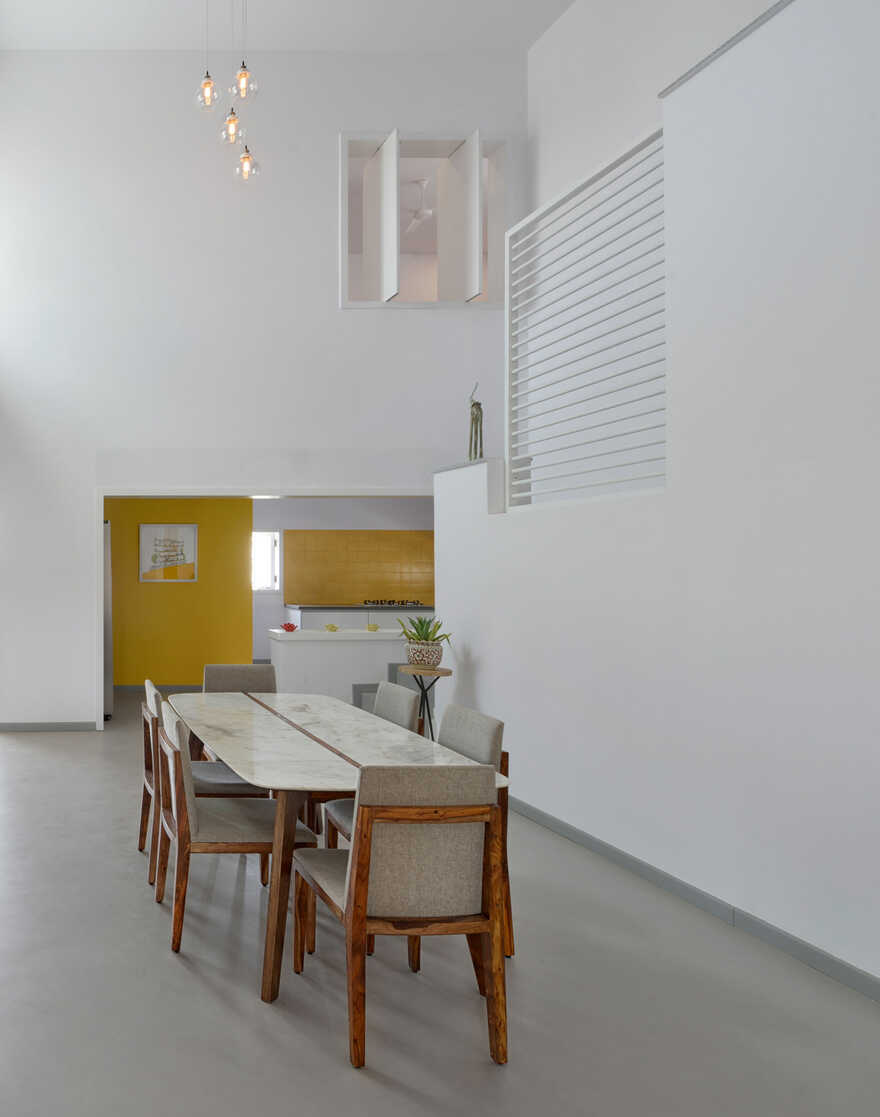 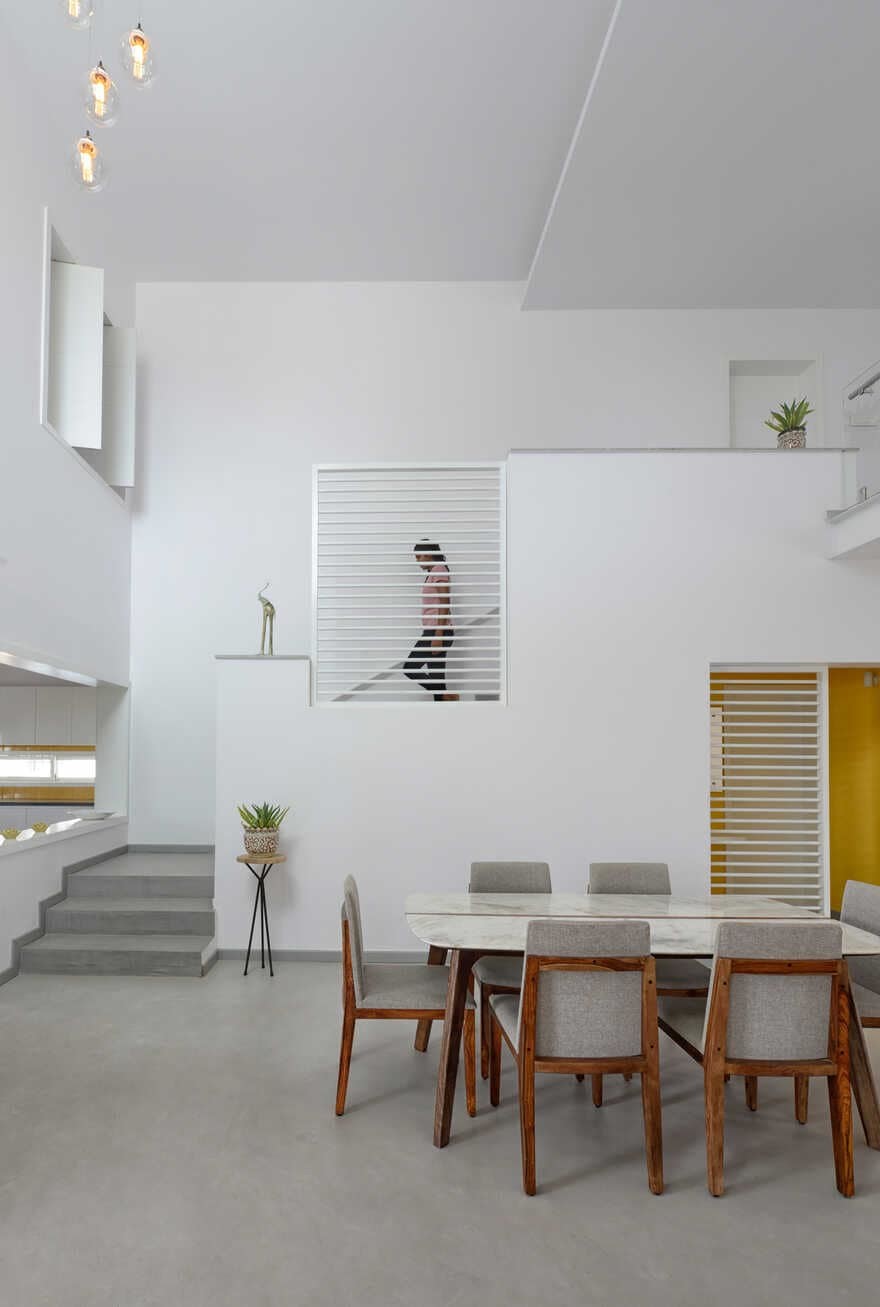 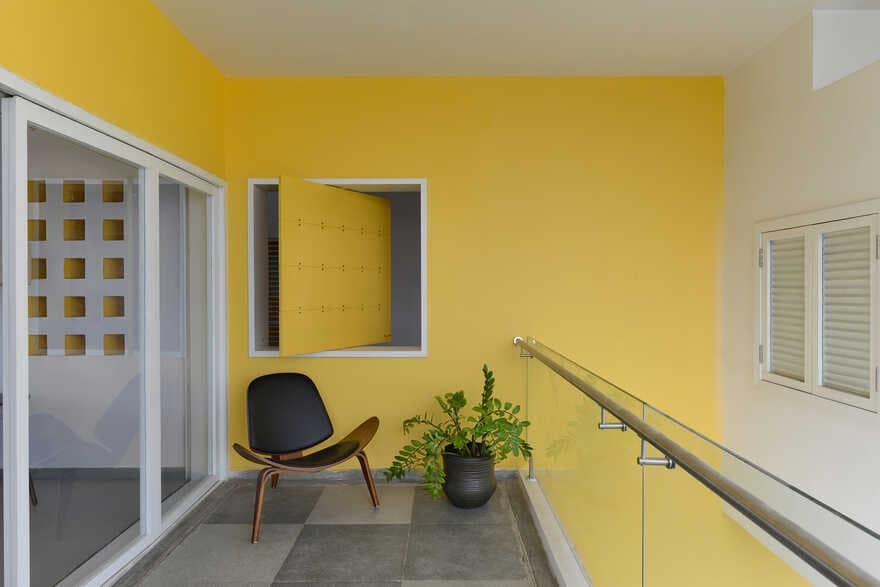 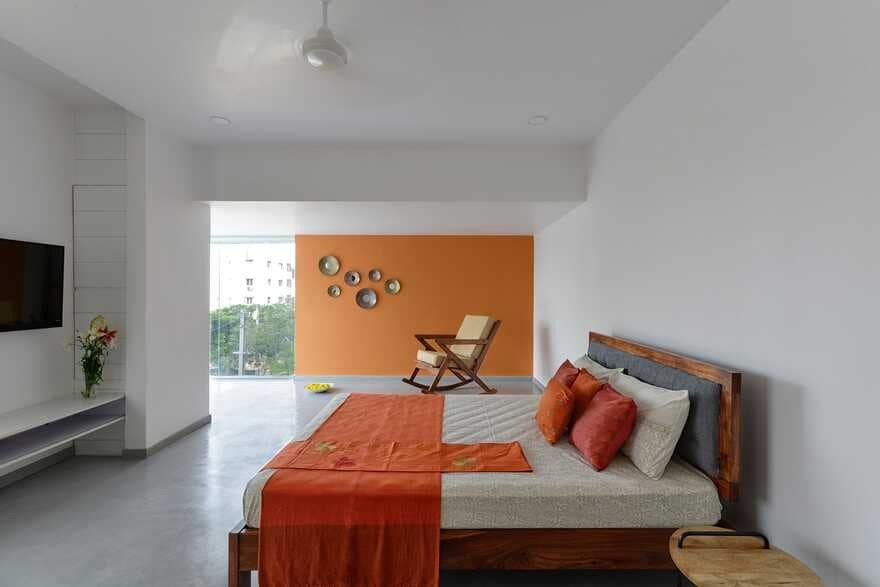 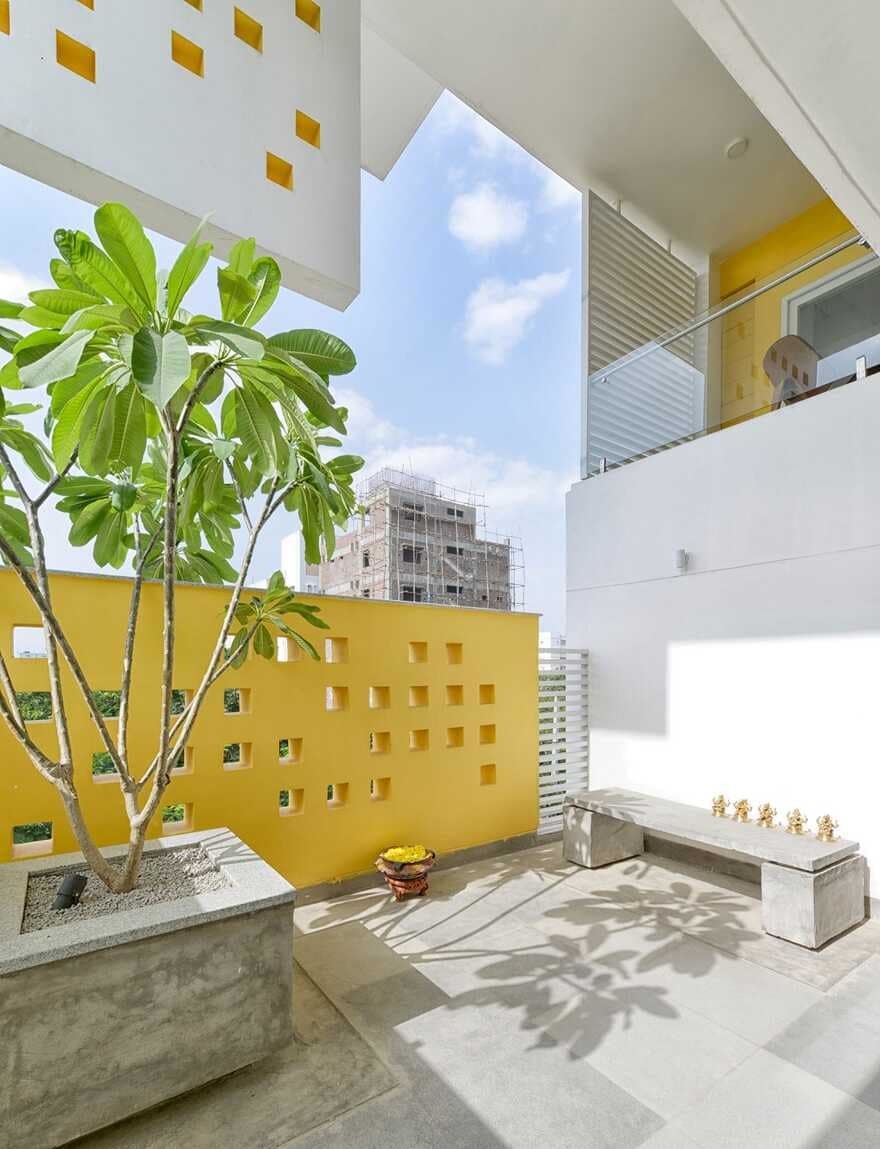 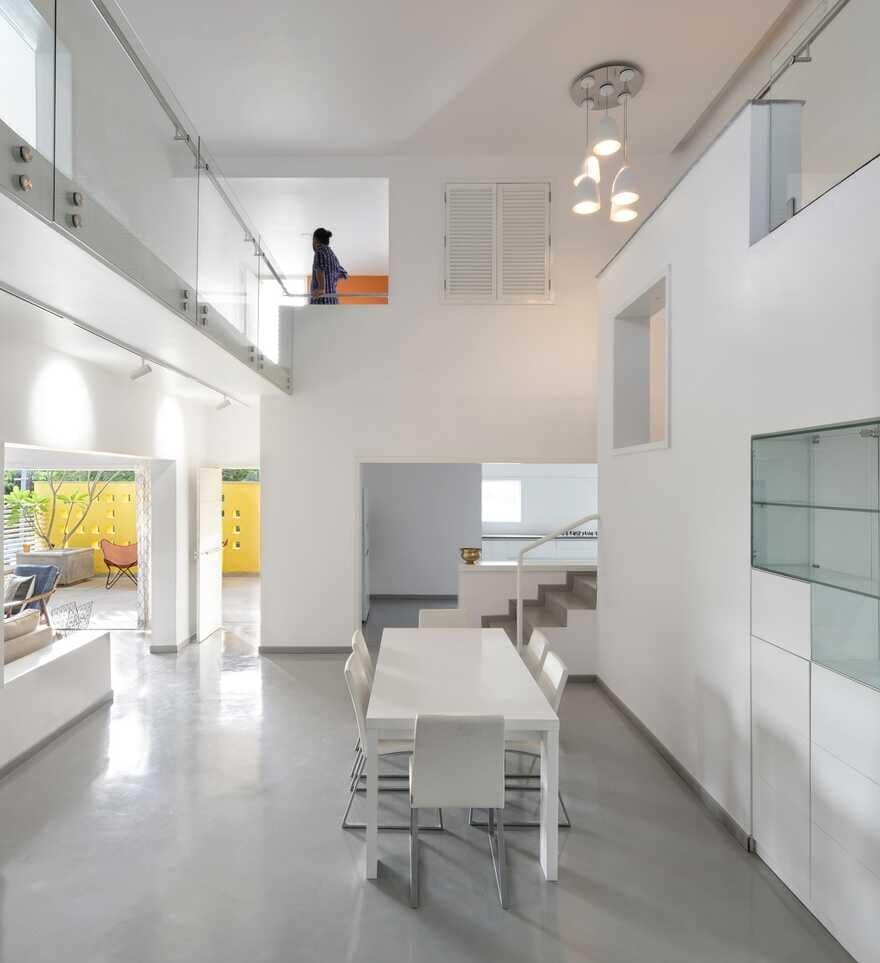 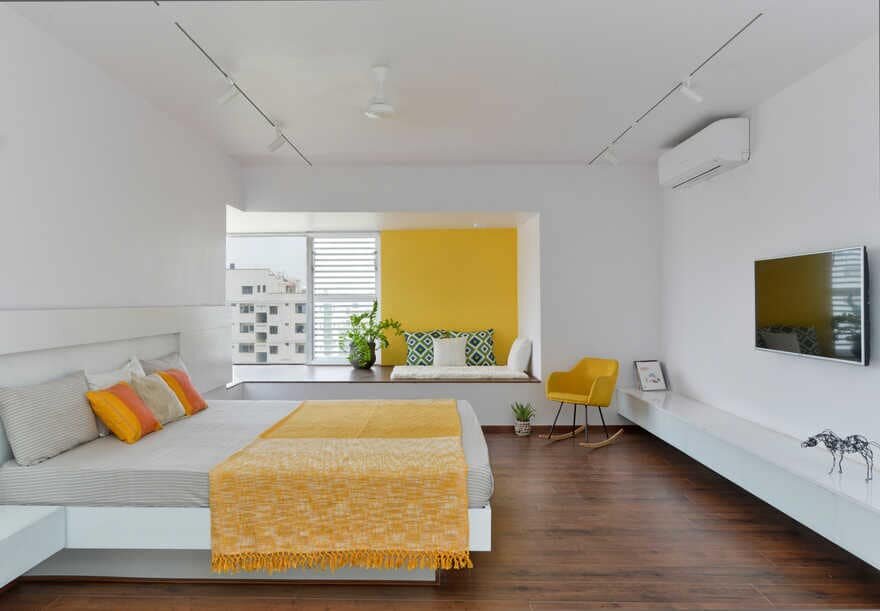 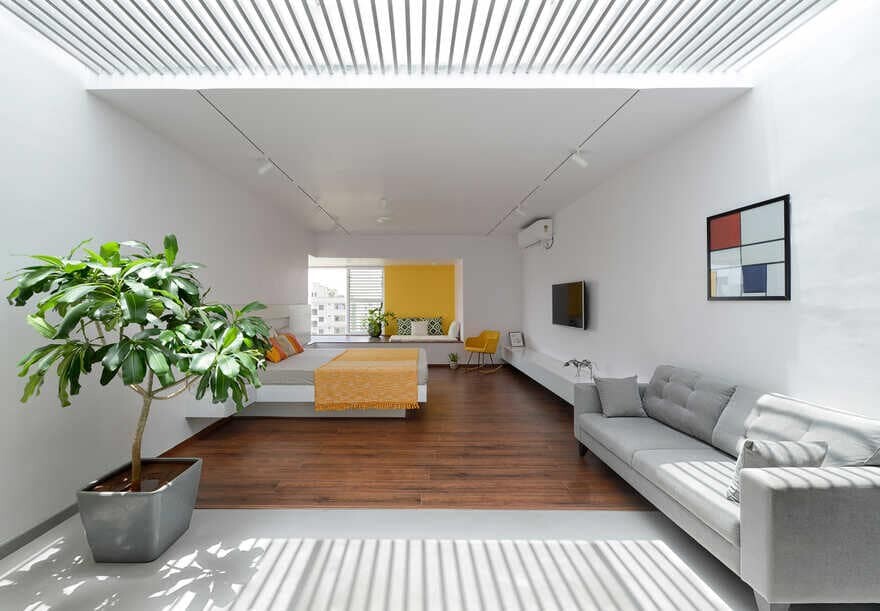 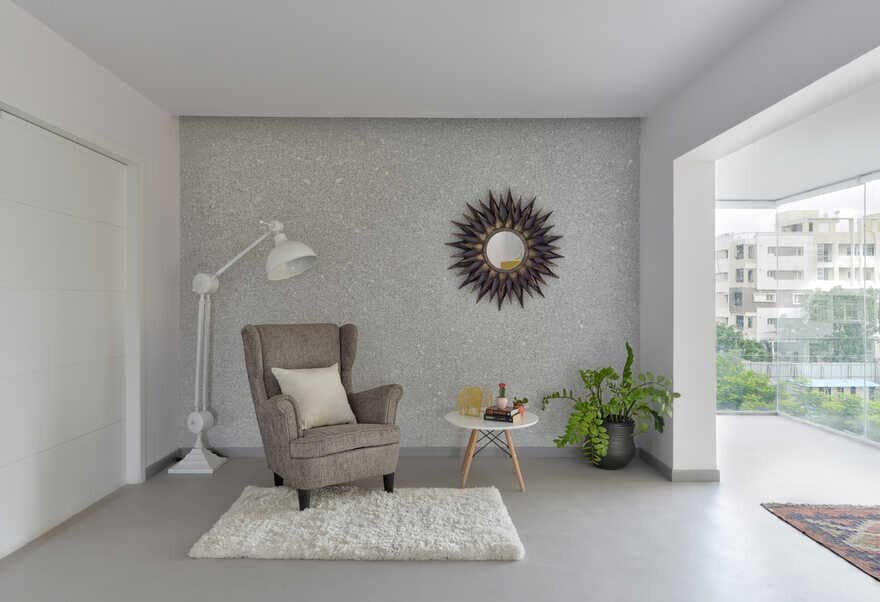 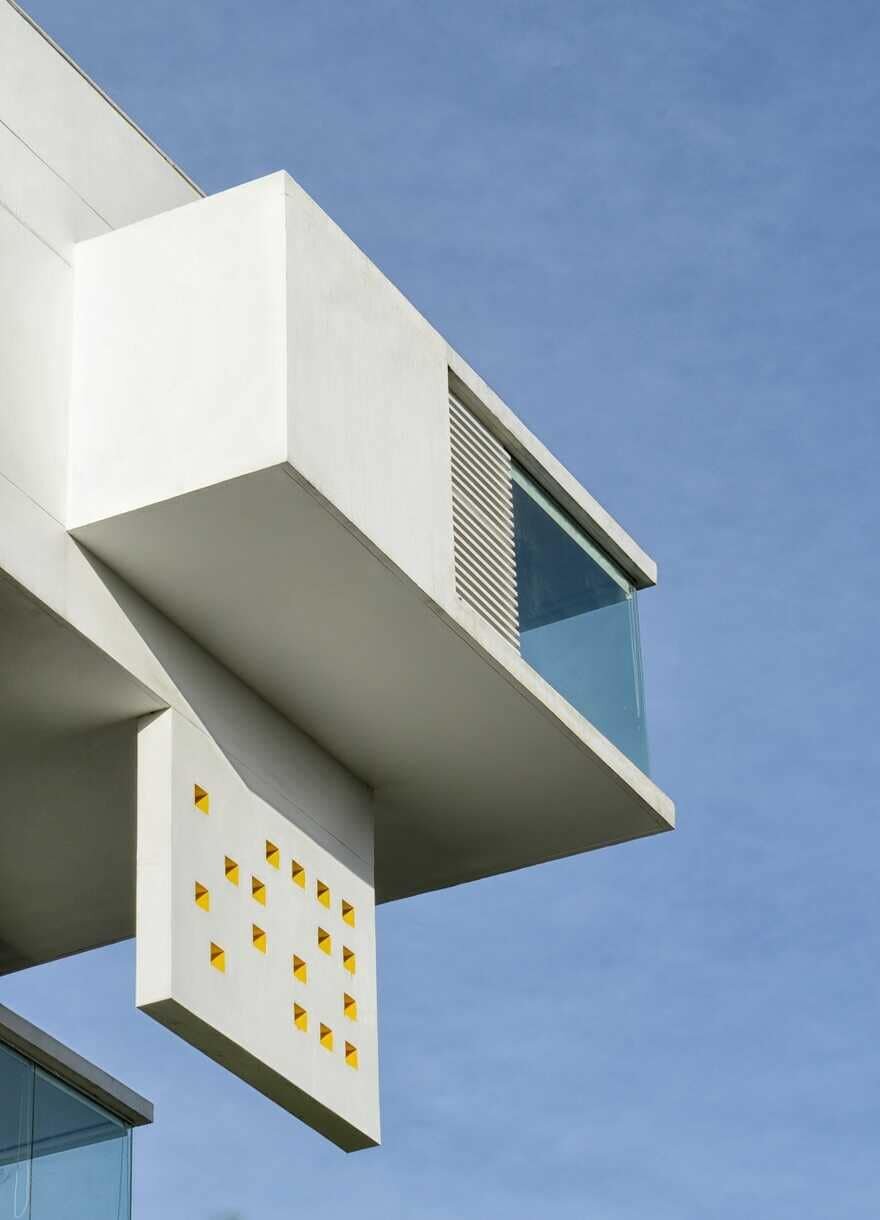 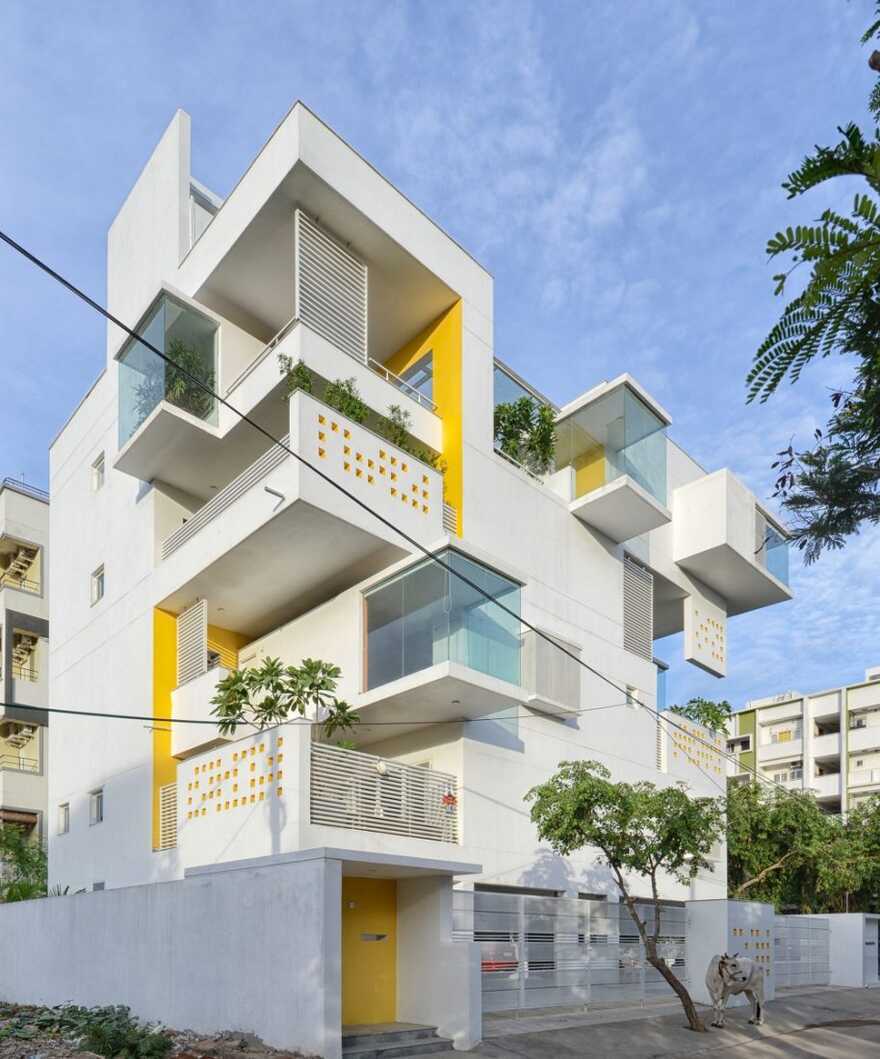 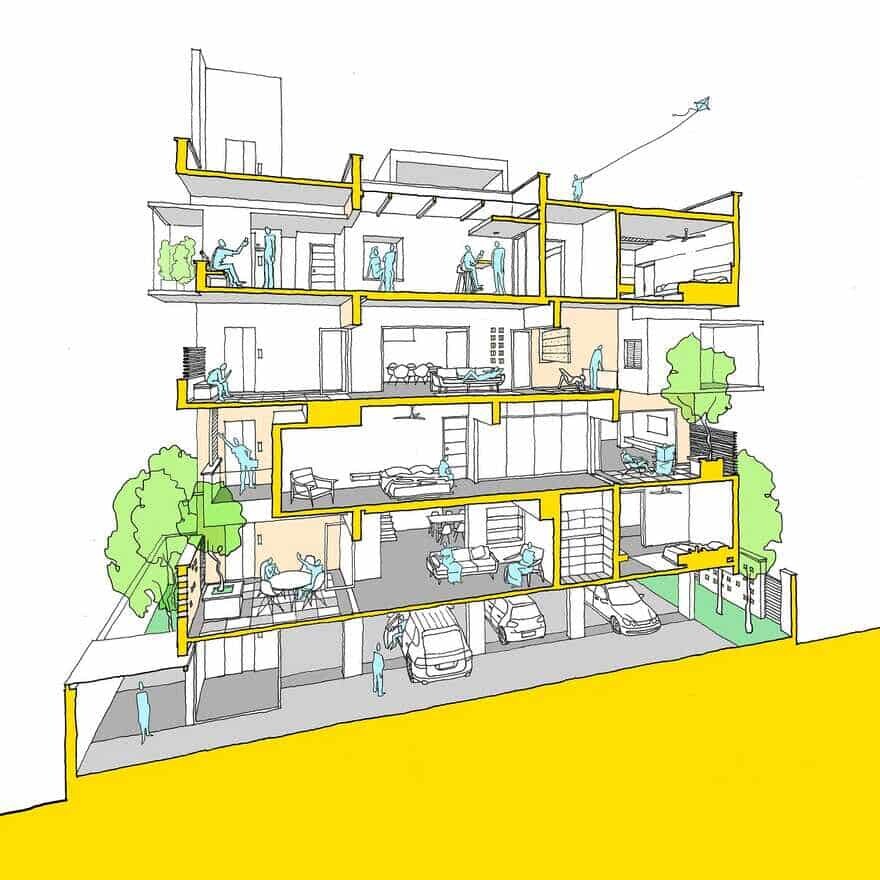