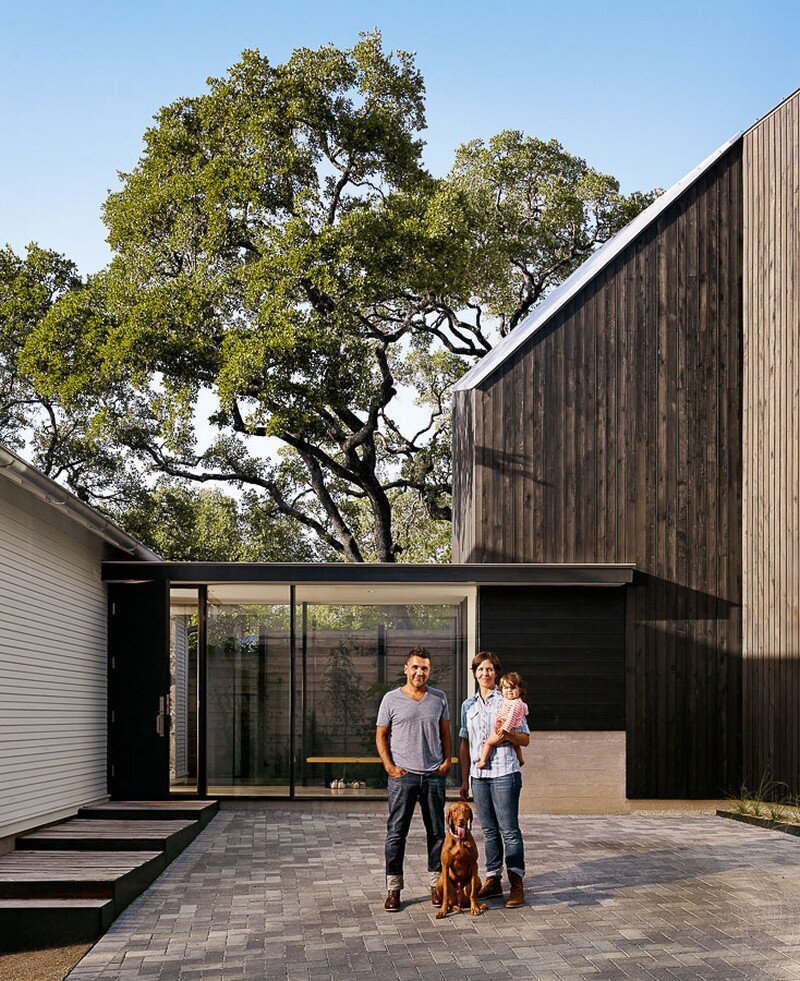 Project description: The Shah Residence is a substantial renovation and expansion of a 1927 bungalow in Travis Heights, Austin, Texas. The existing, 1000 sf building was rescued from dilapidation and delineated abstractly in stark white, and paired with a new, 1100 sf sculptural volume clad black-stained cypress, connected via a glass entry bridge. 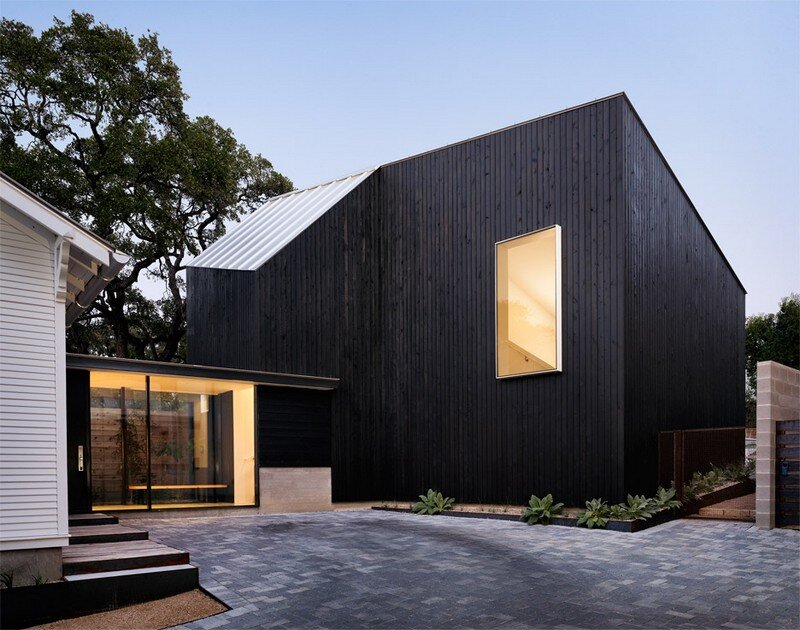 Akin to Marcel Breuer’s 1943 proposition for a Bi-Nuclear House, the home is split into two zones; one for living and socializing, and the other for concentration, work and sleeping – and by virtue of entering in the middle, both sides appear to be in dialogue with each other. Inside, the two zones are defined in distinctly different material and spatial characters; the combination being both gracious and provocative. 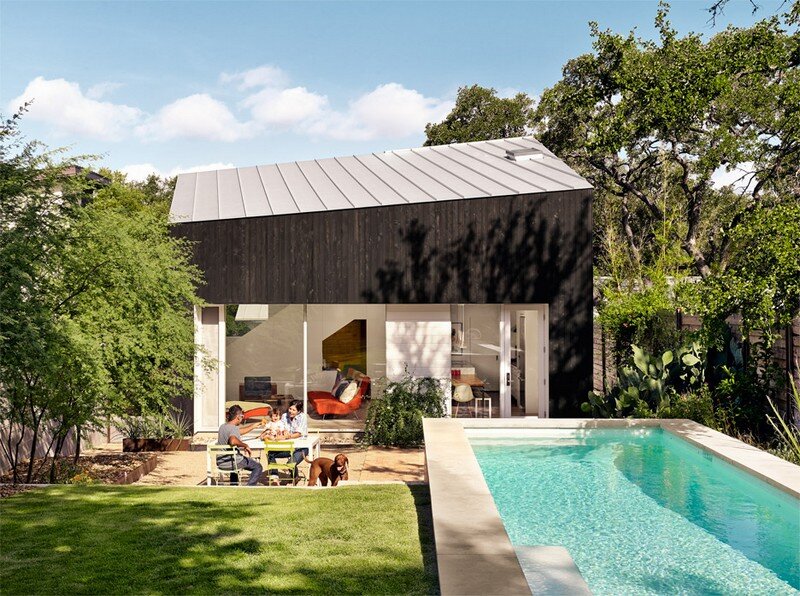 The renovation respects the existing building’s disposition and maintains its collection of discrete rooms, while radically altering their character through an adjustment to its organization. A series of private rooms now take the place of what was public, and the front porch is removed, leaving the existing bungalow’s massing in tact but intriguingly unfamiliar as it appears w/out any obvious way to enter from the street. This private nucleus is accessed through a new corridor that leads to an unexpectedly tall central space, off of which are arrayed the private rooms of the house. 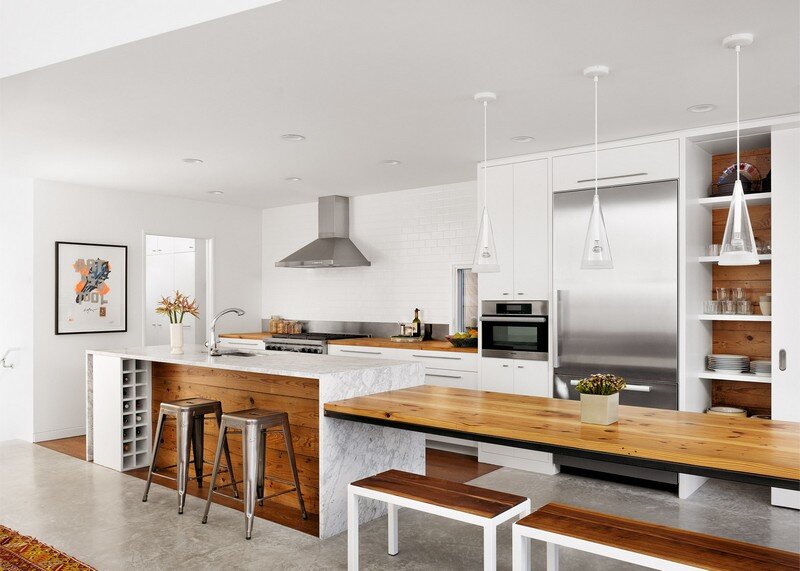 The expansion, by contrast, is characterized by openness, dynamic spatial continuity, and abstraction. An ultimately modern sensibility in the addition provides a counterpoint to the sense of contained space in the original house. As one passes between the old and new construction, the confluence of two distinct architectural characters gives rise to questions about the various ways in which architecture both challenges and reinforces the culture of which it is a part. The ensemble is also a counter-proposal to the immodesties of urban transformation – where a new character replaces a ‘historically underutilized’ building stock. Here, the existing disposition of the street is maintained, albeit with a new temperament. 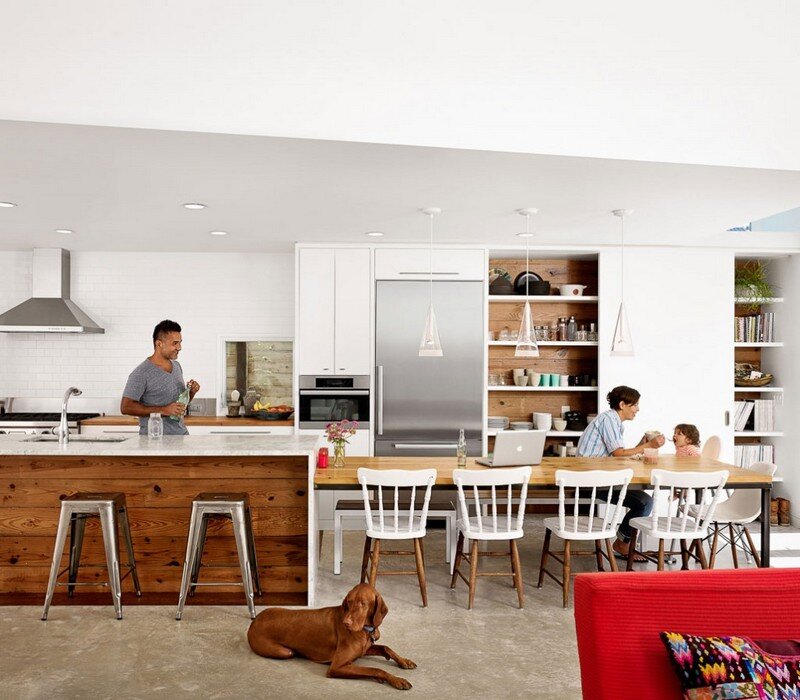 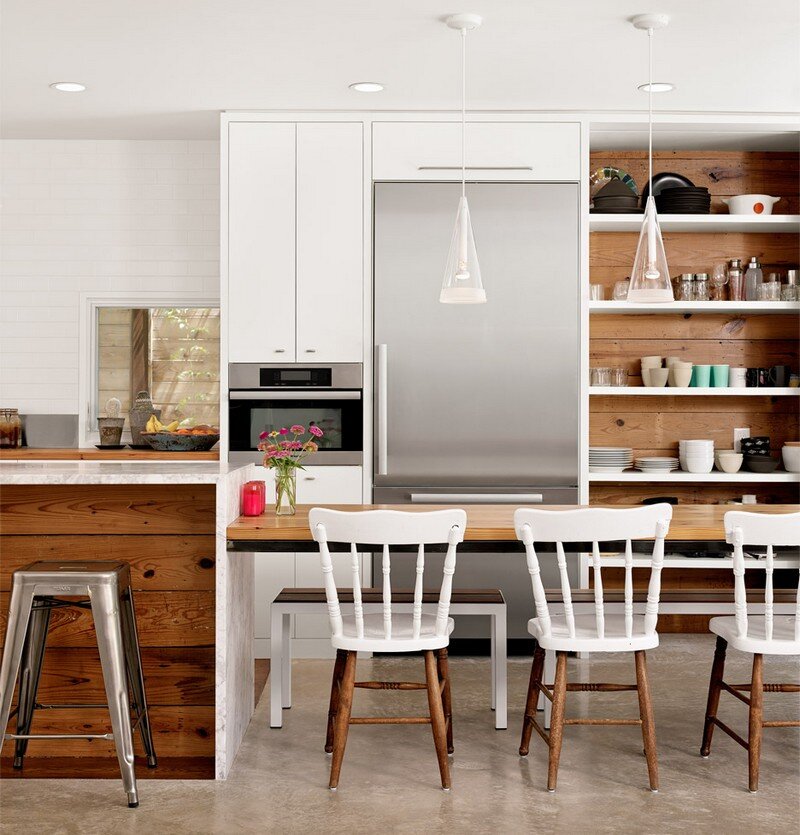 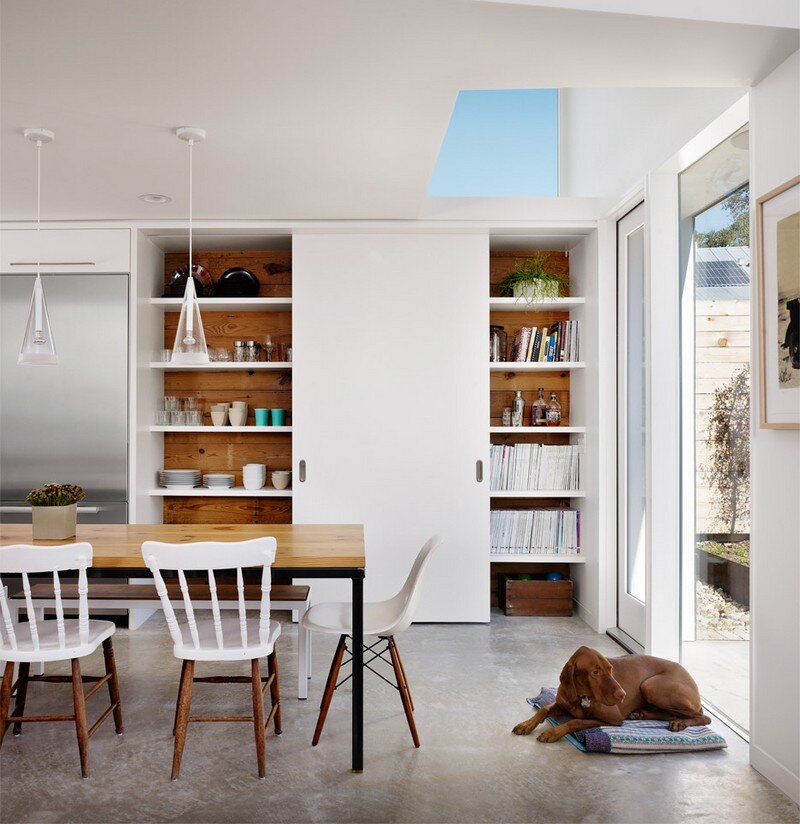 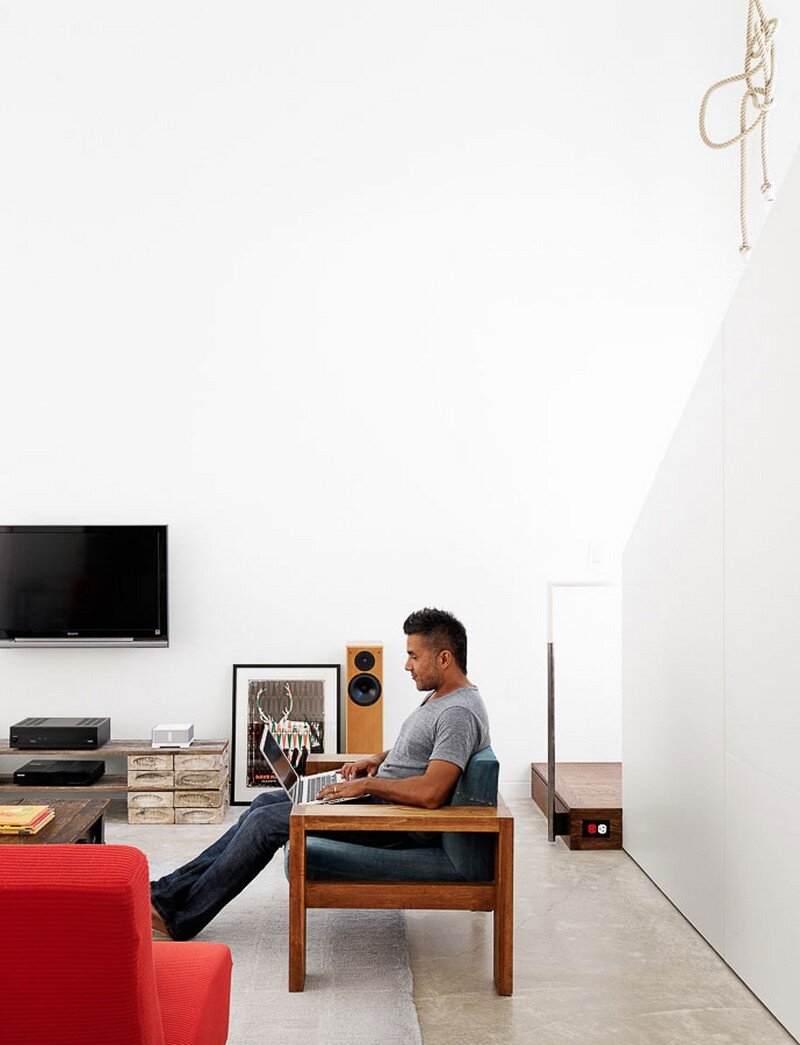 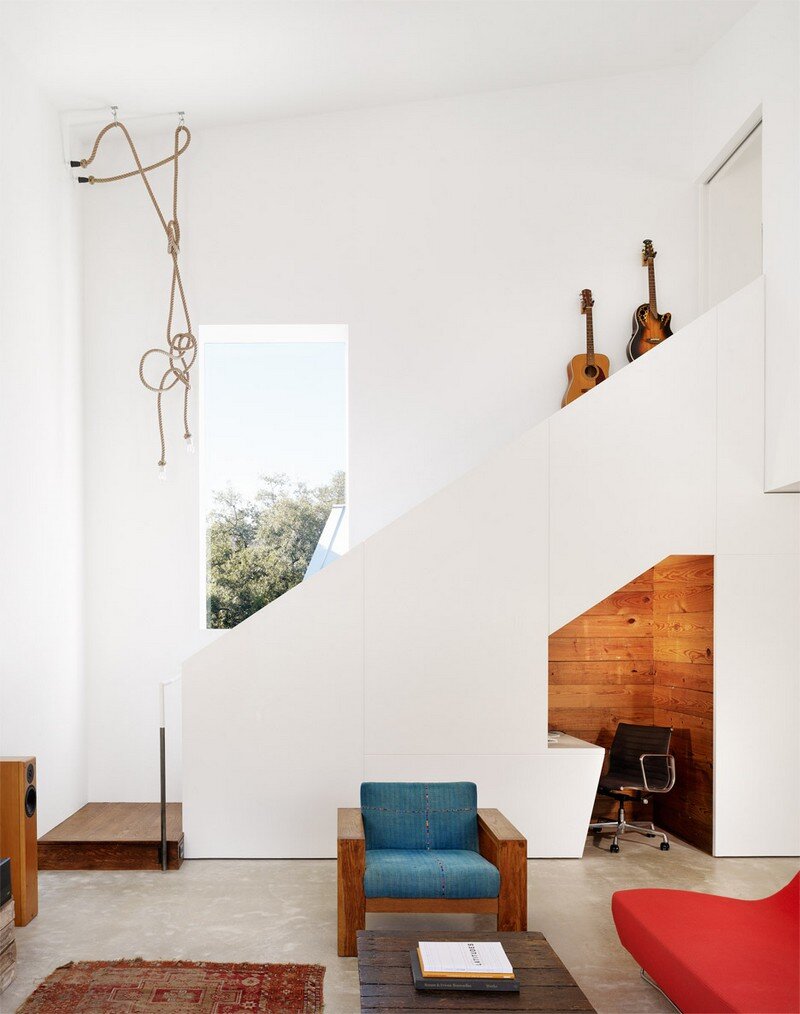 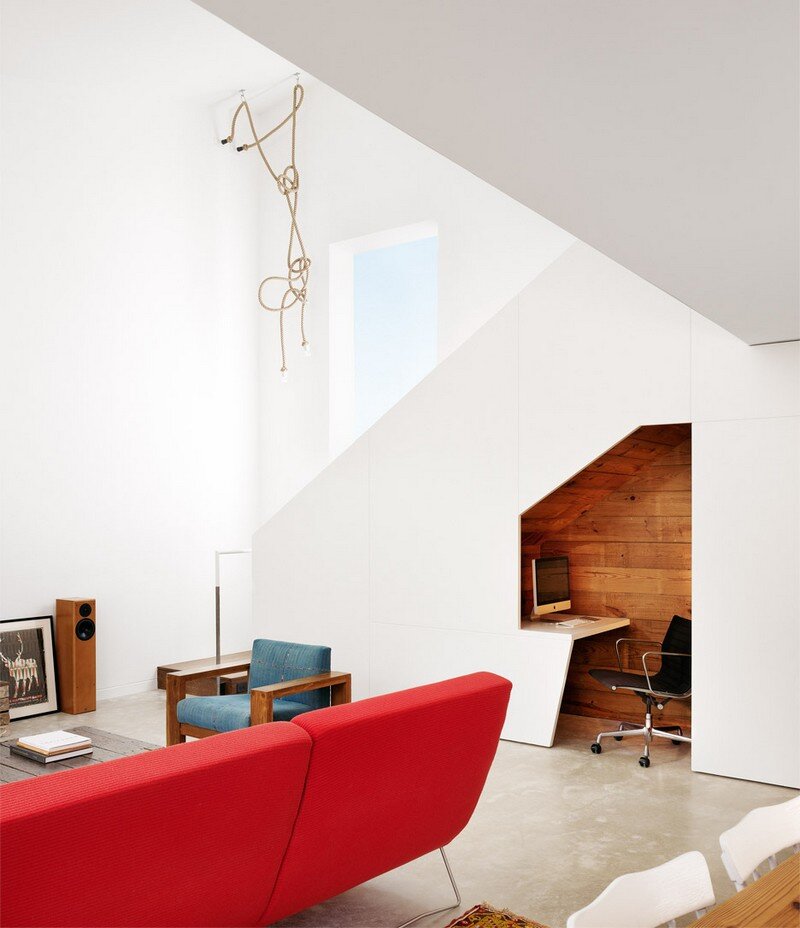 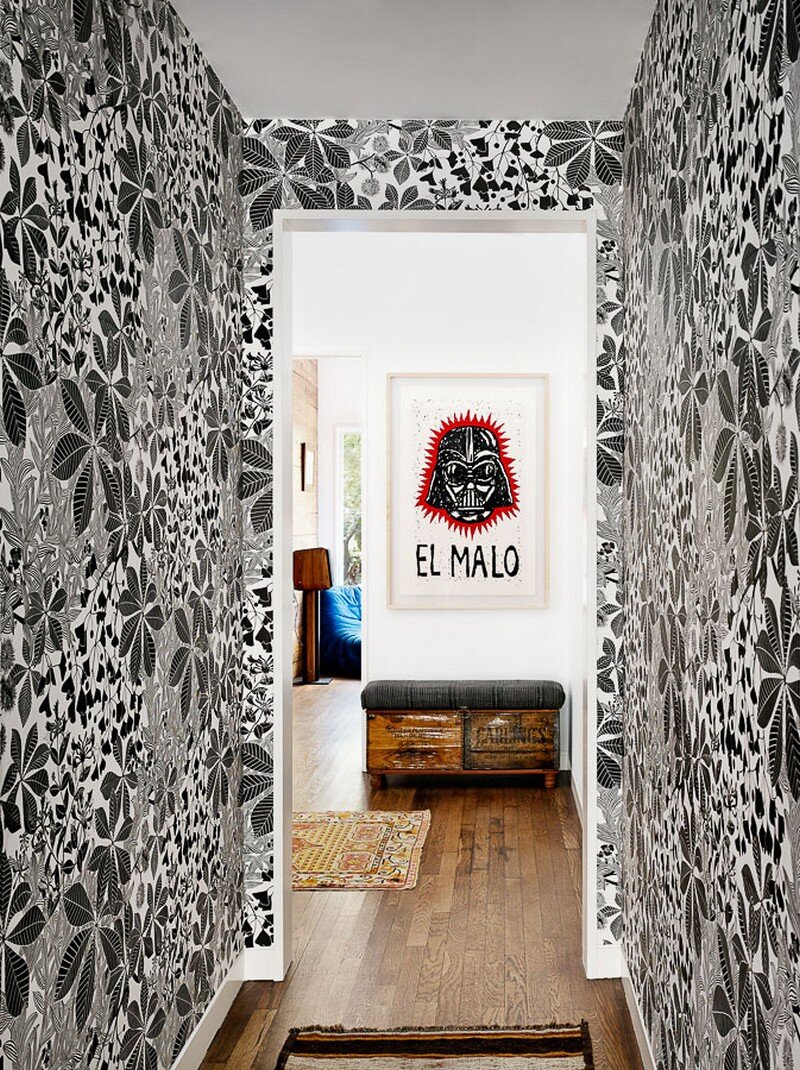 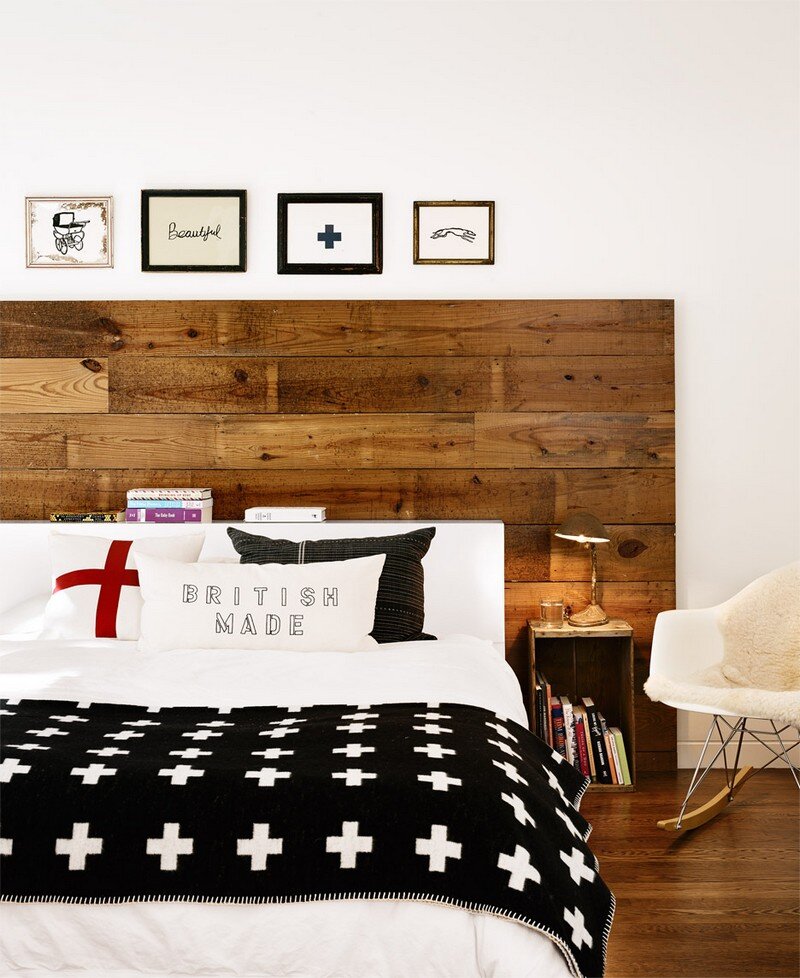 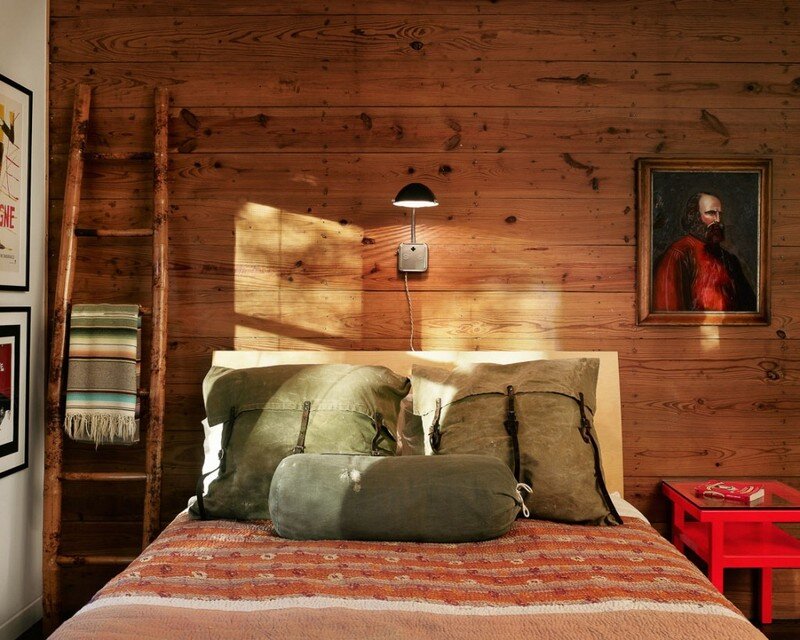 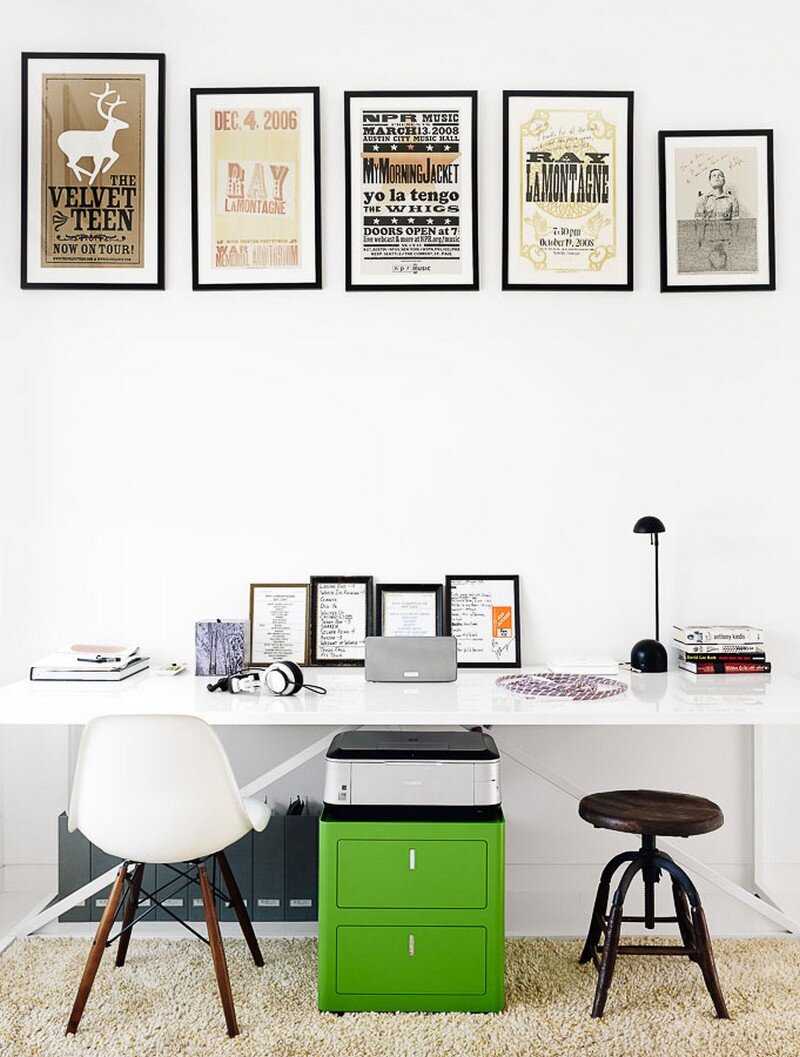 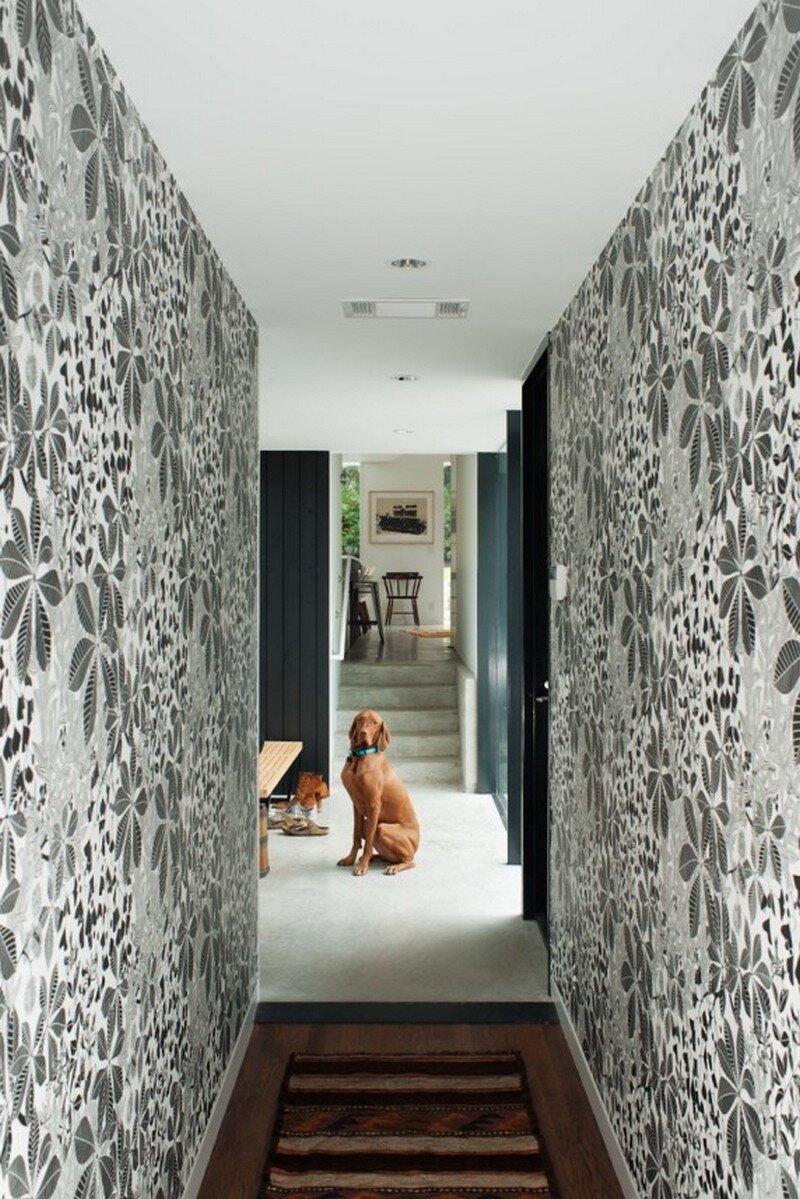 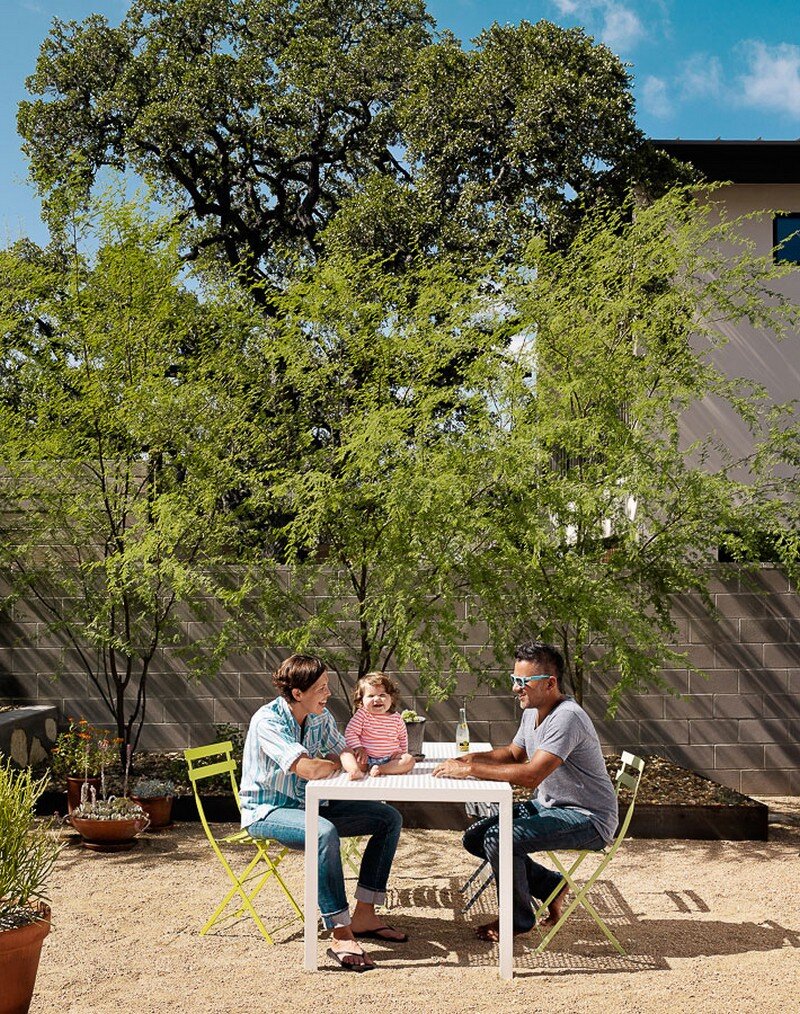 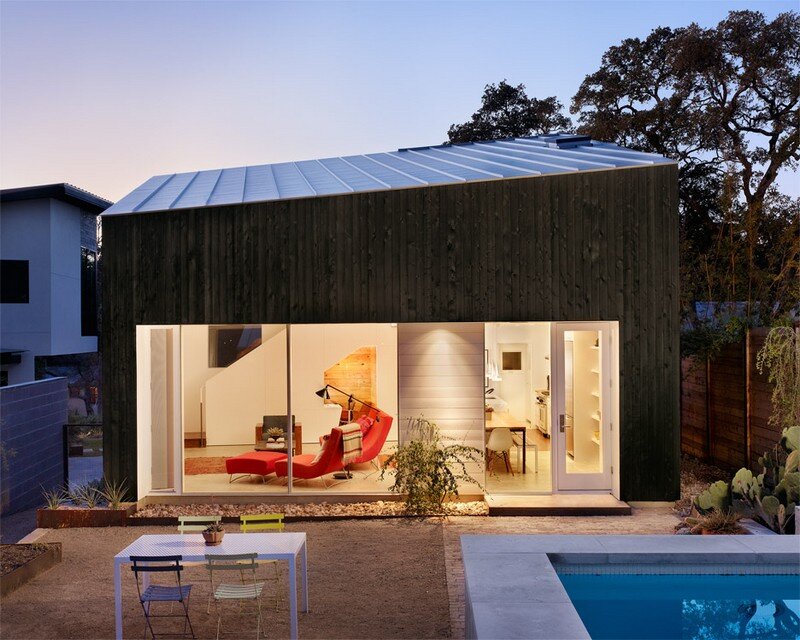 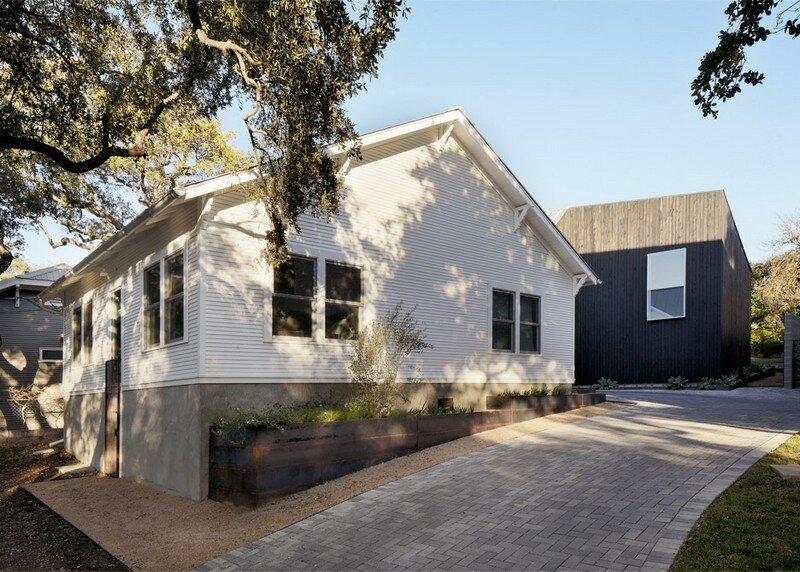