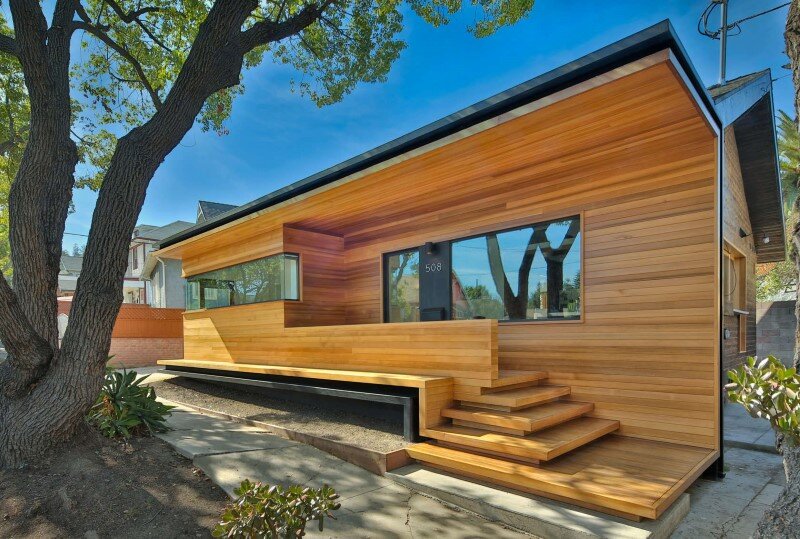 Fenlon House is a 1920 bungalow that was recently modernized by Martin Fenlon Architecture.

Description by Martin Fenlon Architecture: In the little-known neighborhood of Hermon, located just outside of downtown Los Angeles, a dilapidated 1920’s bungalow has undergone a major remodel, bringing new life to the old structure. The new addition to the front of the house forms a unique alliance with the remodeled existing house. This new frontispiece appears to be intimately nested within the older existing house, while maintaining a stark differentiation. The frontispiece has been clad in a clear cedar which contrasts the torched cedar that wraps the rest of the structure. The front addition integrates the house with the adjacent streetscape as it terraces down to the sidewalk and forms a long bench. 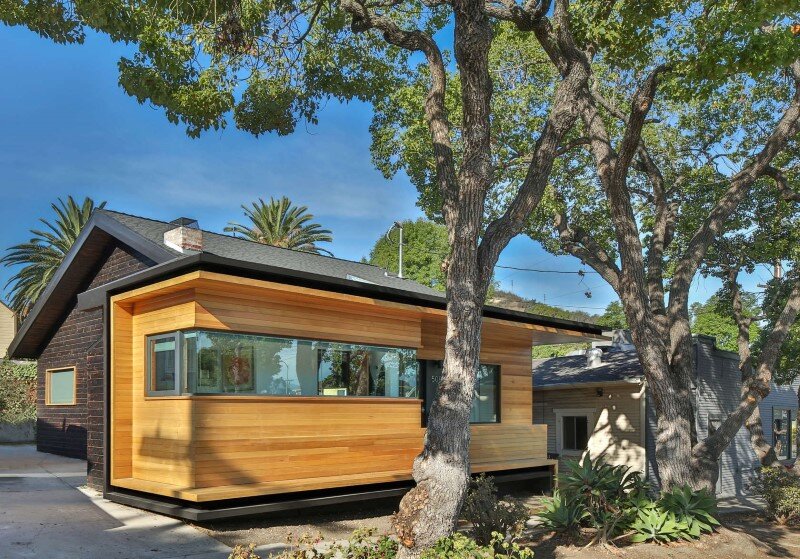 The original gabled porch roof was removed leaving a large triangular opening in the roof which has become a skylight, flooding the interior with natural light. The existing ceiling was removed to expose the original wooden roof structure. The new walnut and teak finishes throughout are similar in tone with this existing wood, blurring the distinction between old and new. The simple combination of the wood and white plaster throughout is reminiscent of California mission architecture. 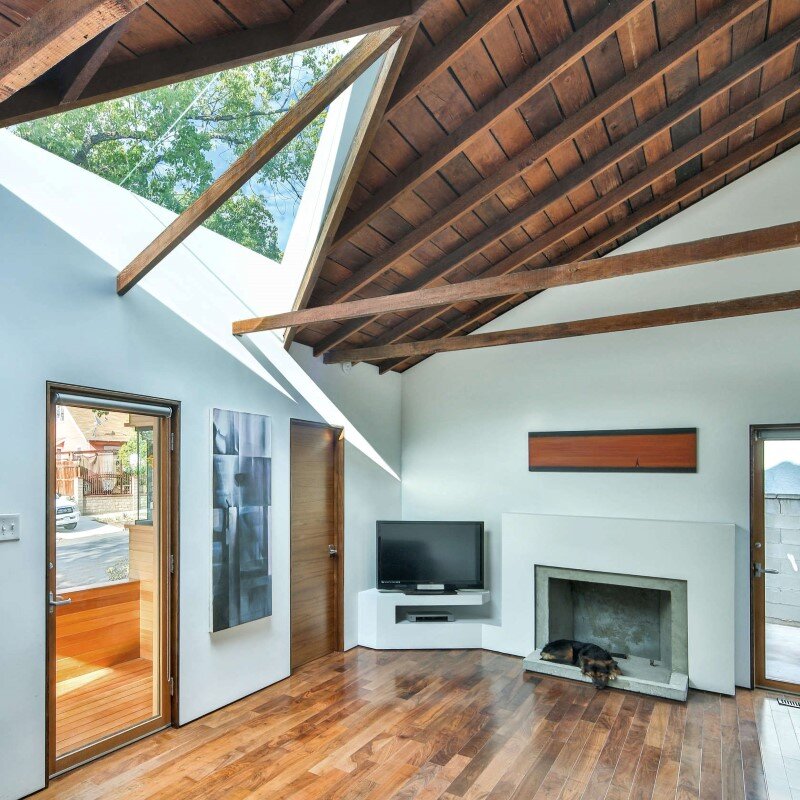 The wood clad kitchen is embedded within the existing plaster-finished enclosure, forming a distinct space within a space that echoes the exterior relationship of old and new, while concealing economic Ikea cabinetry. A large window over the kitchen counter slides open, bringing the outdoors in while allowing use of the counter from the exterior. Other areas of the interior are punctuated by a series of built-ins that integrate everyday objects with the spaces they’re in. 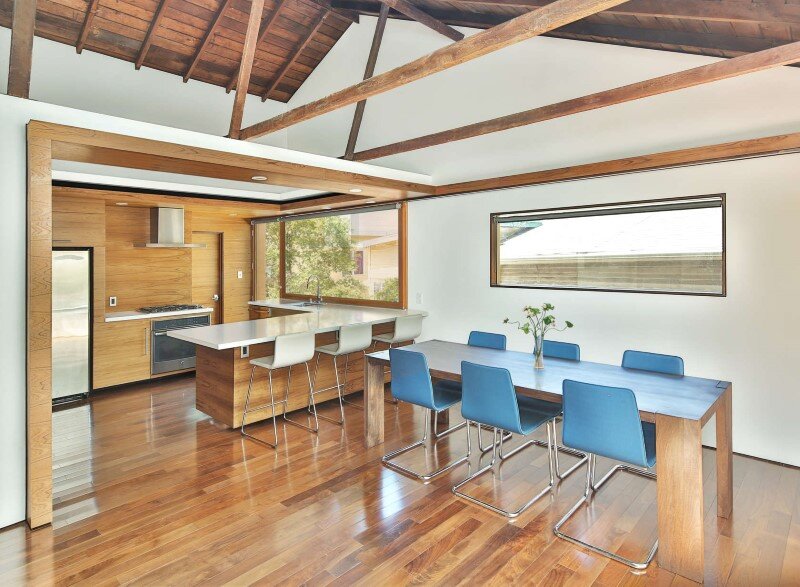 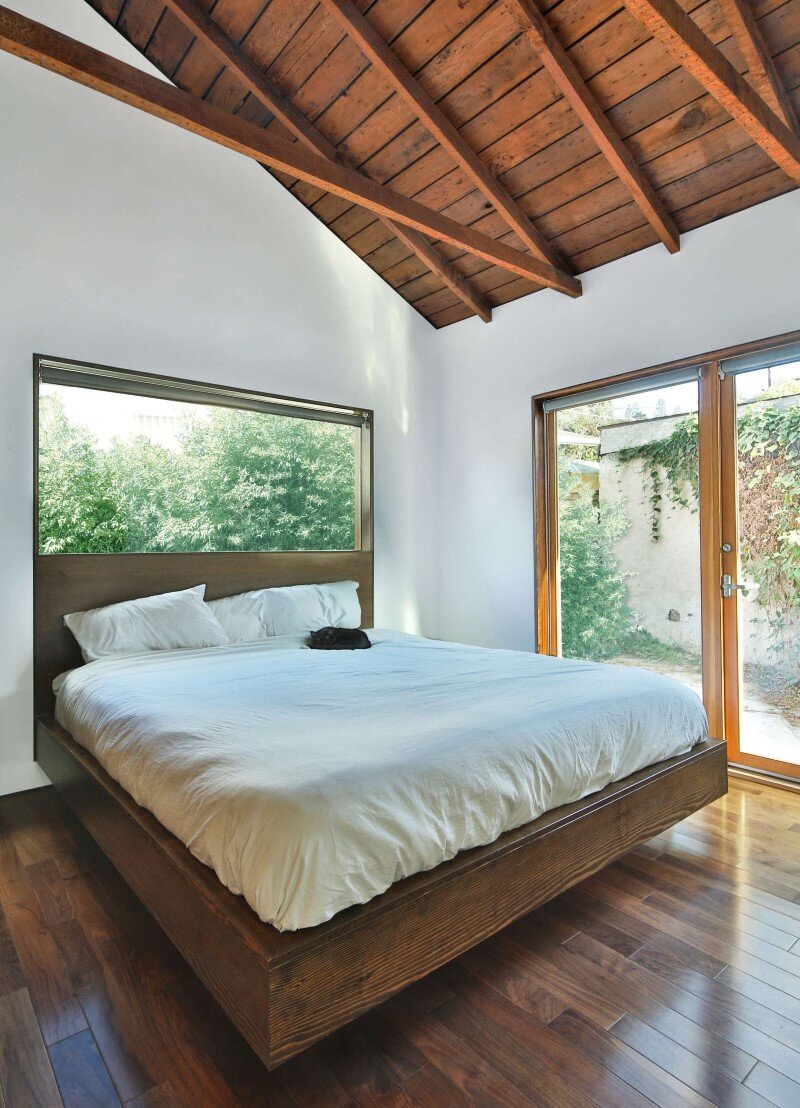 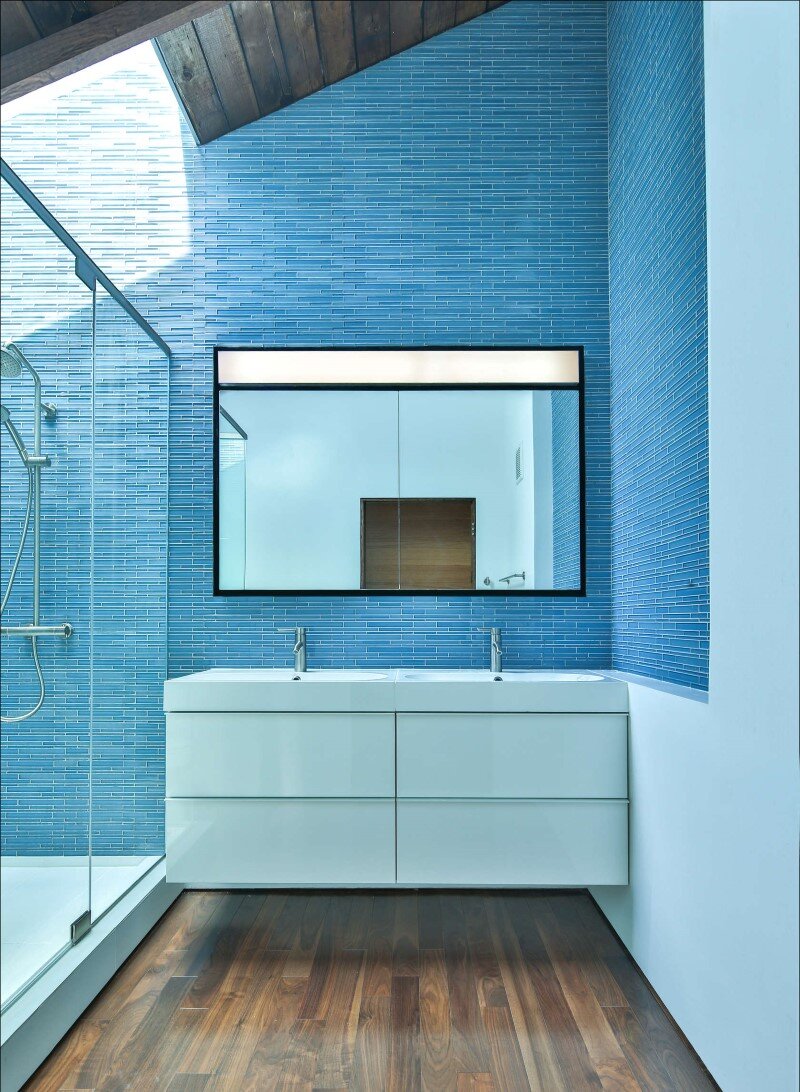 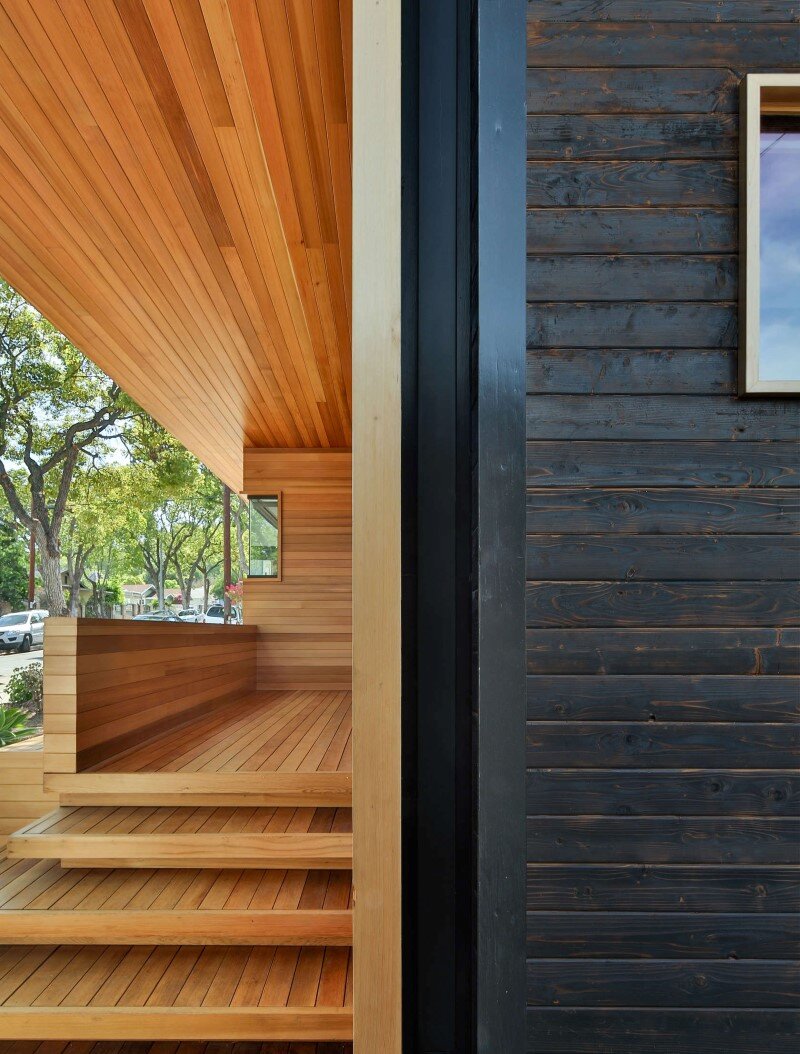 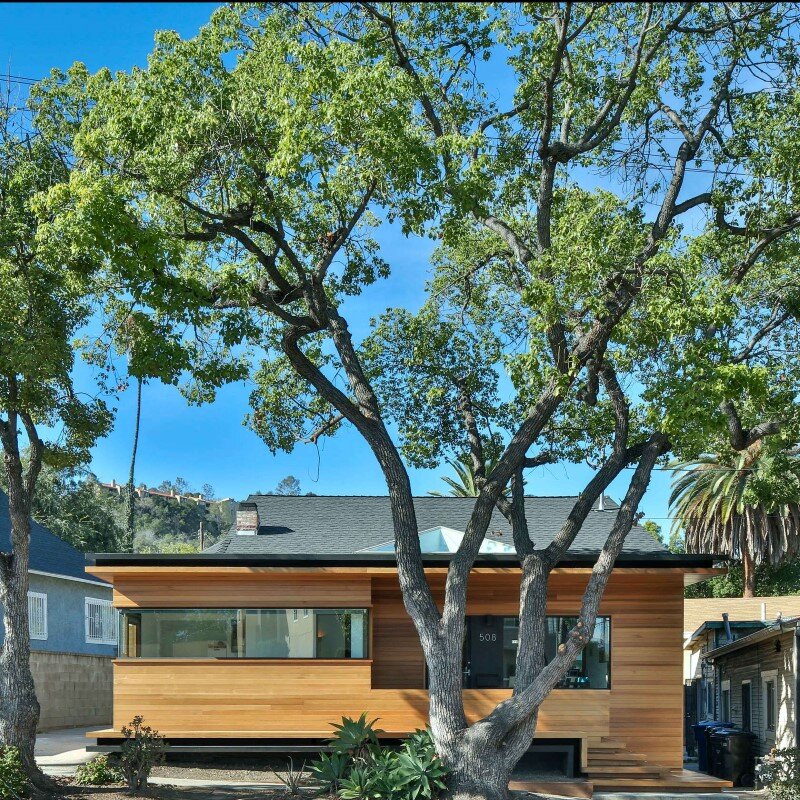 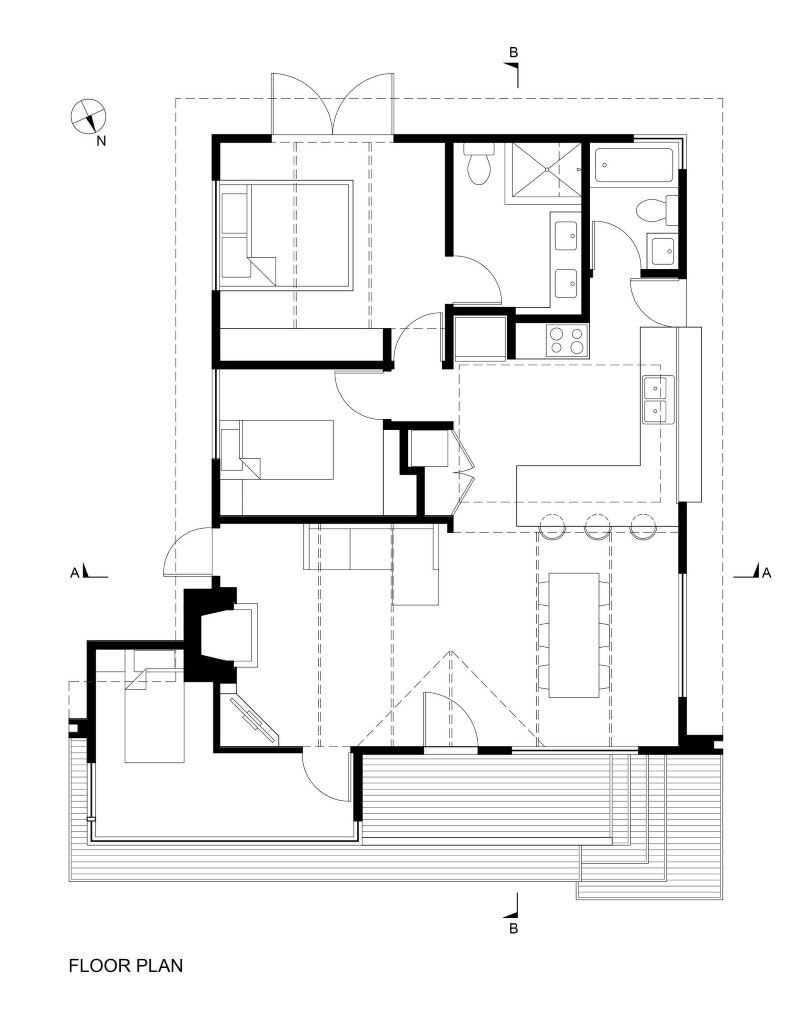 Alibaug Indian Retreat with a Stream Running Through the Middle

With a stream running through the house, this Alibag Indian retreat is delicately woven into the landscape, alternately opening up and closing itself to the different characteristics of the site. Though seasonal, the streambed allows for an interesting landscape feature throughout the year.
Read more

The plan of the Vineyard house was designed to respond to family living, with public or shared areas on the ground floor and bedrooms above. The master bedroom is separated from the children’s rooms by a bridge spanning the double-height great room that takes up the majority of the lower level.
Read more

Nestled in the mountains of northwestern Connecticut, the Edge House is a quiet retreat with spectacular views. The crescent form of the building and its cantilevered ends are tailored to the site, a sun-filled clearing in the forest above a stream that meanders through the valley below.
Read more

The house sits firmly along a winding ridgeline on the outskirts of the small township of Fish Creek. The home surrounds itself in a highly textured brickwork wall in response to its exposed position to strong local winds and a nearby country road.
Read more
© All rights reserved. HomeWorldDesign 2013-2020. All images are © each office/photographer mentioned.