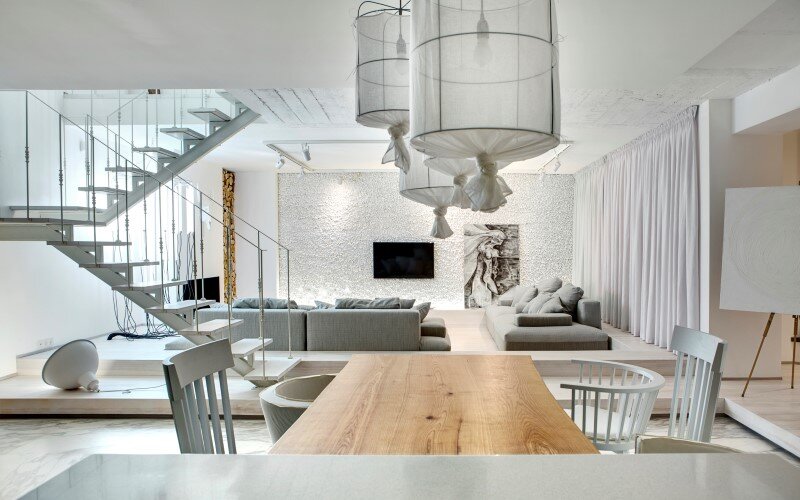 “Peace of mind” is probably the best name for this spectacular duplex apartment designed by Ukrainian studio FORM Bureau. As far back as at the very beginning, when it came to choosing the interior’s concept itself, the architects of the FORM bureau along with the Customer took a decision together to move away from the contemporary trends. Initially, there was only an approximate idea which had been evolving harmoniously during the process and as a result acquired new nuances. 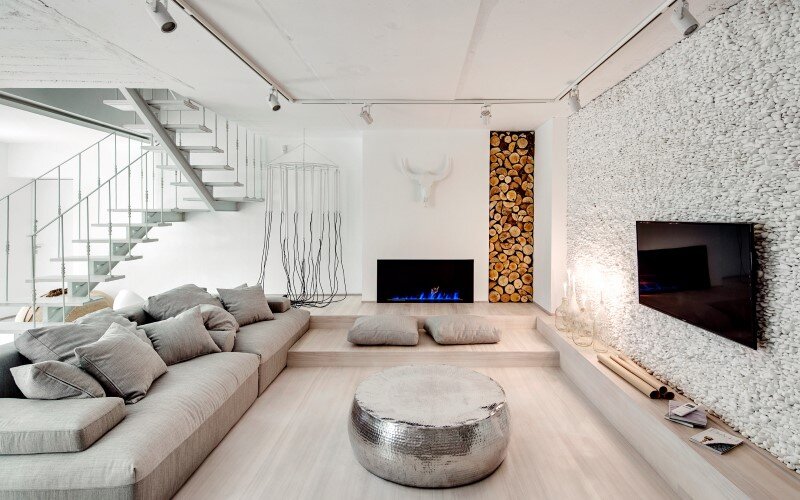 The duplex apartment was chosen not by coincidence. The Customer was looking specifically for a space which could give the possibility to separate the area for hangouts from sleeping area. The Customer’s words that “a crucial point was to confide in an architect” were very important during our work with the interior. As a result, each texture and detail found its place in our interior. Lighting played one of the most important roles, focusing attention on the textures of the walls and highlighting important areas and details of the space. White color and authentic simplicity became the framework for everything. For contrast we used shades of black color only in details, the warmth was added by a natural wood on the floor. Architects worked mainly with Ukrainian manufacturers on this work area, with the exception of the chairs in the dining area (Gervasoni from Italy), and some of the light fixtures and decor imported from Bali. 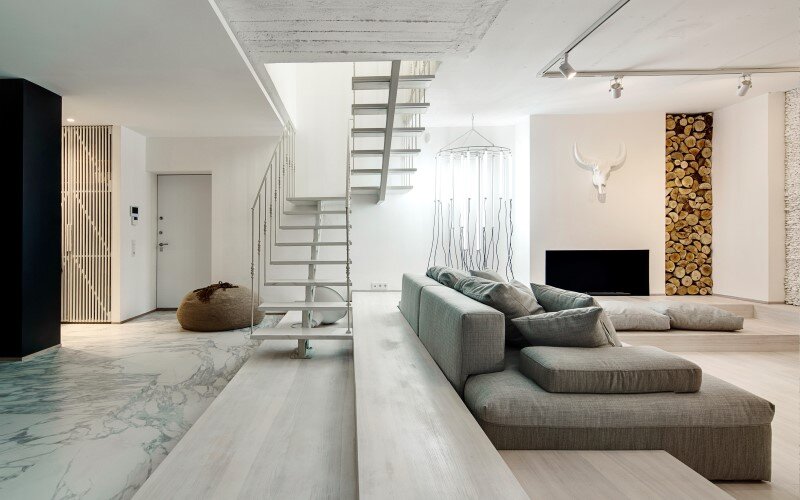 Beautiful concrete inter-floor covering with traces of timbering came into open after removing the gypsum plasterboard from the ceiling on the ground floor in order to increase the height first of all, which was 2.60 m. But even with such height we still decided to make a podium to separate the area of sofas from the dining room. We did not have any worries that it could make the ceilings look low, so the architects decided with certainty to paint them white, even though the Customer wanted to preserve the existing color of the inter-floor covering. 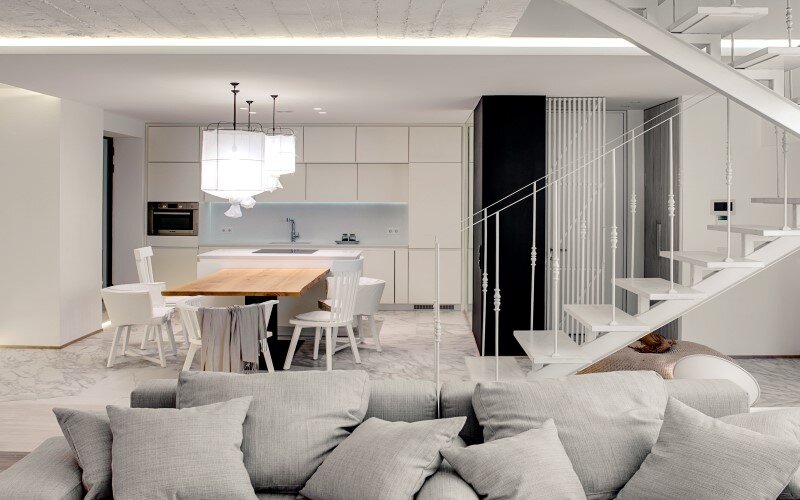 The wood burning fireplace which was originally in the apartment turned out to be out-of-order, so it was replaced by bio fireplace, but the ideas with the firewood remained. In the living room on the main wall with TV we decided to use white pebble. The tile layer had been pasting it to the wall, one by one, during 3 weeks. Sofas in the common room and the rest of upholstered furniture were manufactured by Ukrainian company Interia. Sofas fitted in to the tick with their seat depth of 1.20 m. In the kitchen area you can see a table made of accreted boards of ash-tree and iron leg. It was manufactured by workshop of Ivan Chudov. The kitchen is fairly simple. Painting MDF white. 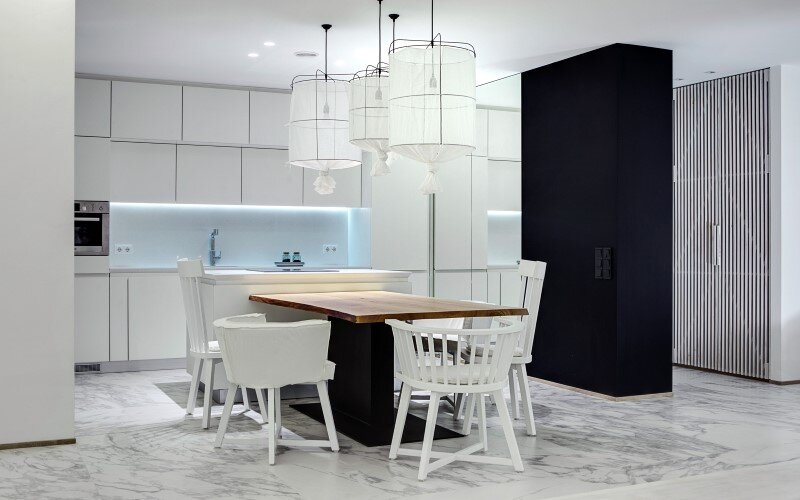 Countertop and worktop of the island were made of a faux stone, mounted by the company Love Stone. On the wall near the kitchen the mirror was glued, expanding the space. Black wall was painted with chalkboard paint designed for writing with chalk. Ceiling in the kitchen area and in the dining room was lowered not only to build in light fixtures and to provide light to the common room, but also to hide the ventilation. On the floor we used tiles REX of 1700mm x 900mm size. Originally, there was one long loggia on the ground floor. We divided it into two parts by using a glass partition. From one part of the loggia we made a children’s play area, and the second part we decided to make tea and hookah area which we closed by a glass door. That area appeared to be very cozy. 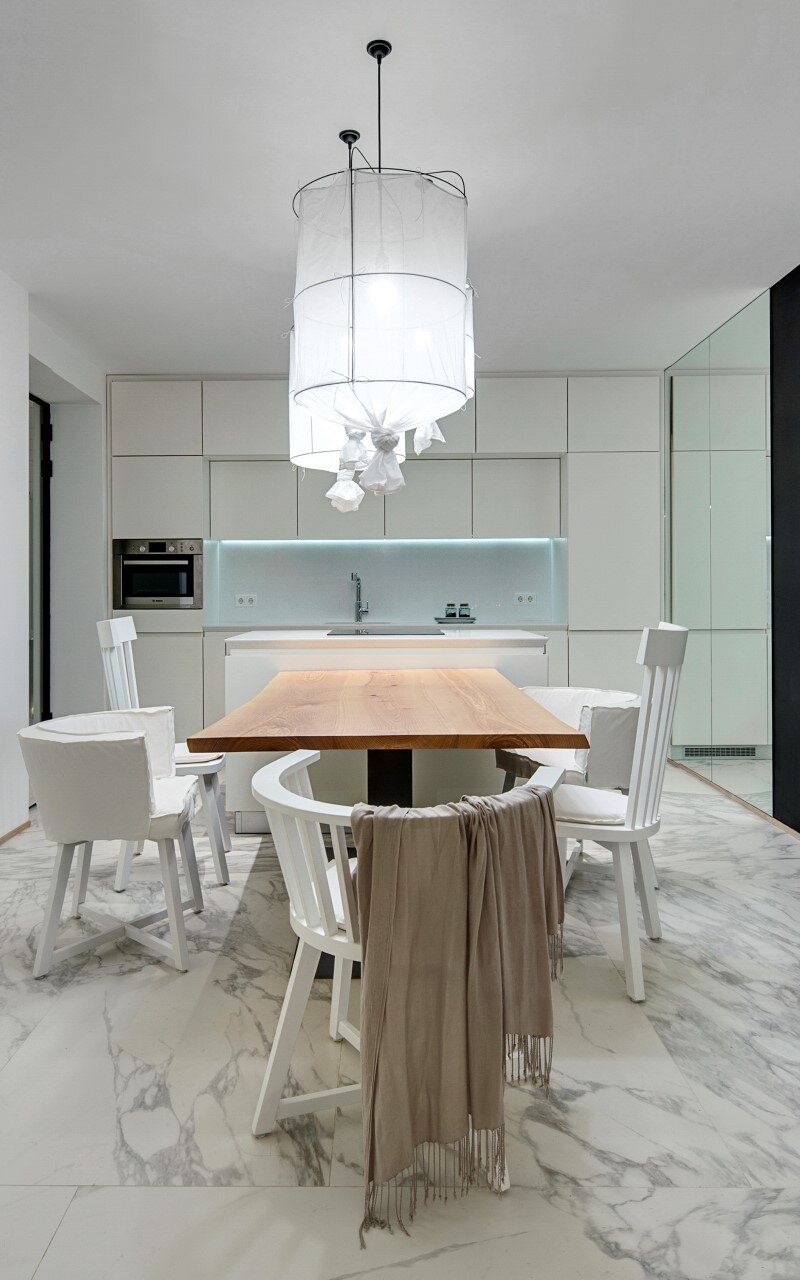 Sanitary room on the ground floor we wanted to make sort of mind-blowing with interior of white color in the background. For this purpose we choosed natural stone cut in imitation of the tiles, (L’Antic Colonial). Behind the rack doors we installed the household case. One of the most difficult moments that we faced was to find sufficient number of coins with nominal value of 25 kopecks (we had to visit more than one Oschadbank in Kiev to buy them). There are about 4 thousand hryvnia in total amount.

Our original plan was to make the ladder very light and airy. We welded metal frame and installed wooden stairs on it. We painted the stairs white and slightly aged them. Hand railings were welded from fabricated drop-forged parts and painted white. On the first floor all the doorways were raised up to the ceiling. Wall finishing in the lobby was made with boards which were aged artificially and painted white. Lamps were manufactured by “My Light” according to the drawings of the project authors. In the sanitary rooms we used large mirrors to expand the rooms visually. Instead of usual towel holders we used a tree branch, which was painted white and hung on the ropes.

The main bedroom – on one of loggias we made area with a hammock for having rest, and on the second loggia we organized area with a dressing-table and bureau. Copper rundlets standing near the bed were brought from America, and copper light fixtures were found in a shop in Bali. As the Customer desired, we placed a big bed with sleeping place’s size of 2/2 meters. After removing the plaster from the wall we opened existing bricks and painted them white. The wires to the sockets and switches were laid in the joints between the bricks. In the sanitary room of the main bedroom we decided to make a wooden ceiling (from boards of pine spruce). We deliberately refused from the showers and installed bathrooms at the Customer’s request. There is a lamp in the nursery on the wall – MI MI. Idea is that this is a short form of Emily, name of the Customer’s daughter.

Guest bedroom is as white as the rest of the interior. We decided to refuse from the closed walk-in closet and used a well-known technique, where instead of the hanging rod for the clothes a tree branch was used. The entire interior of this duplex apartment was implemented in 8 months. The key point in this interior is the overall harmony. Peace of mind is the topmost idea of this interior – and this state has been a long-run objective of the Customer and of the project authors – FORM bureau. [Via email – Courtesy of FORM Architectural Bureau] 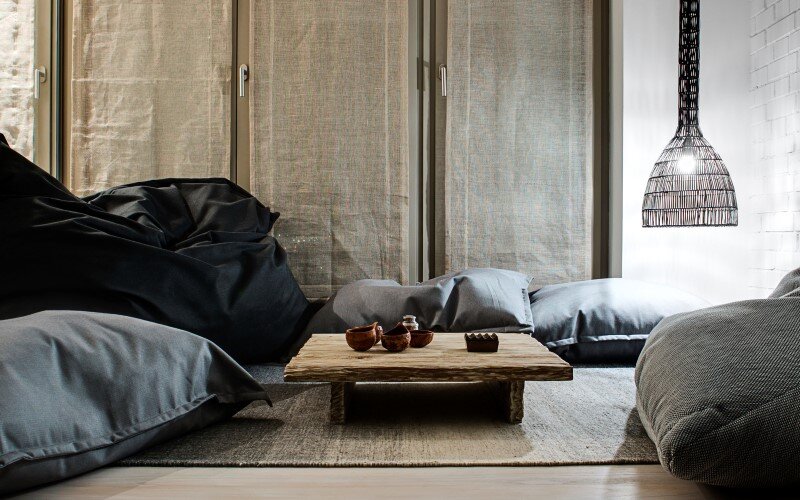 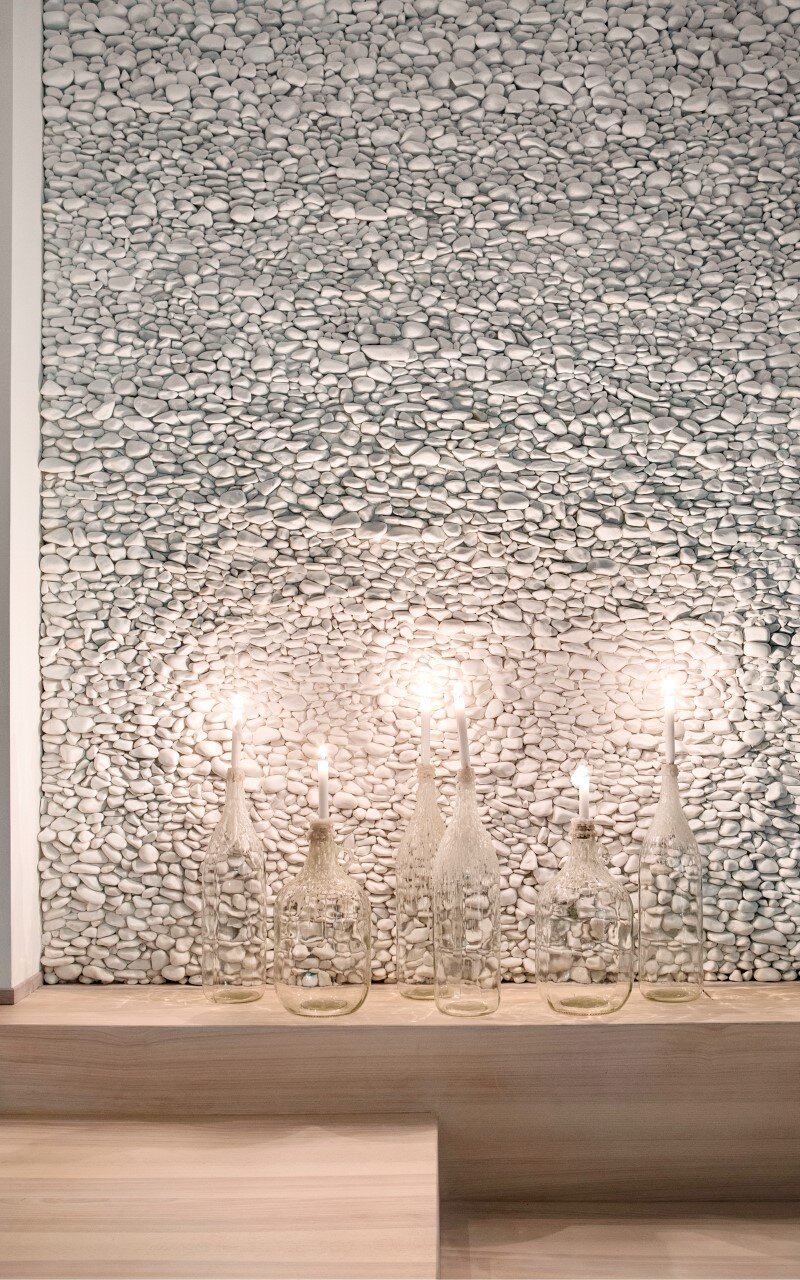 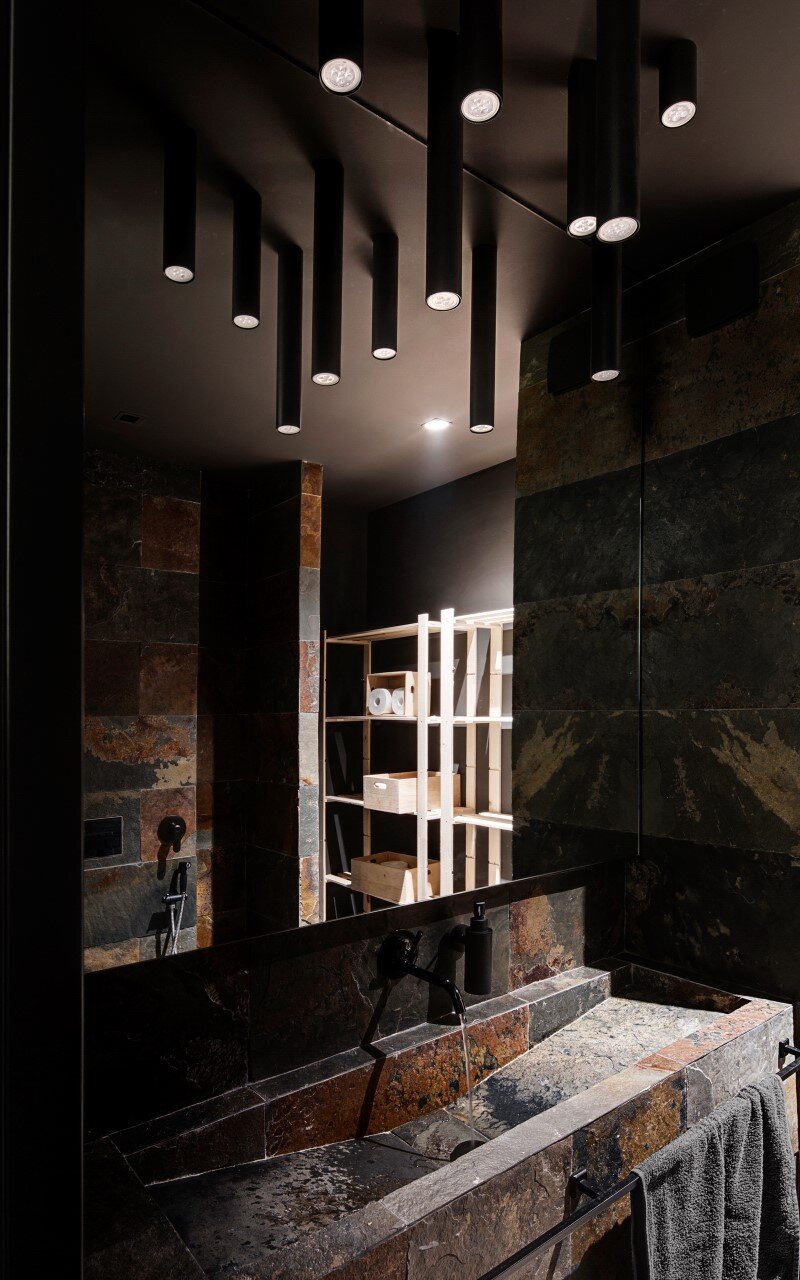 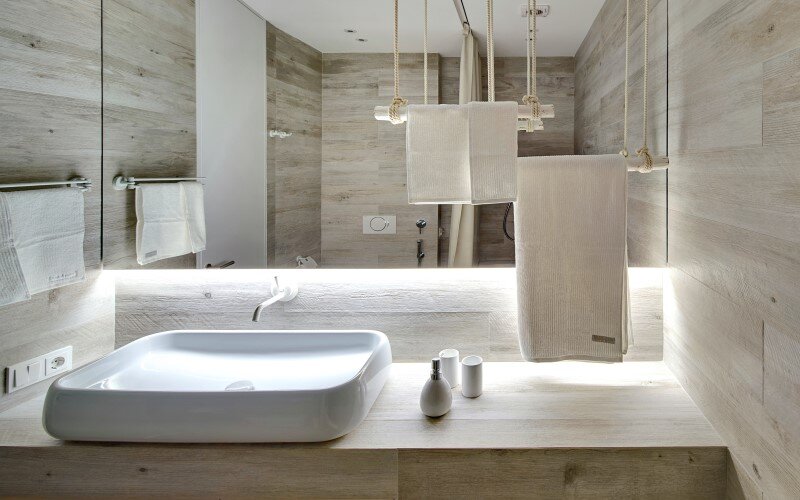 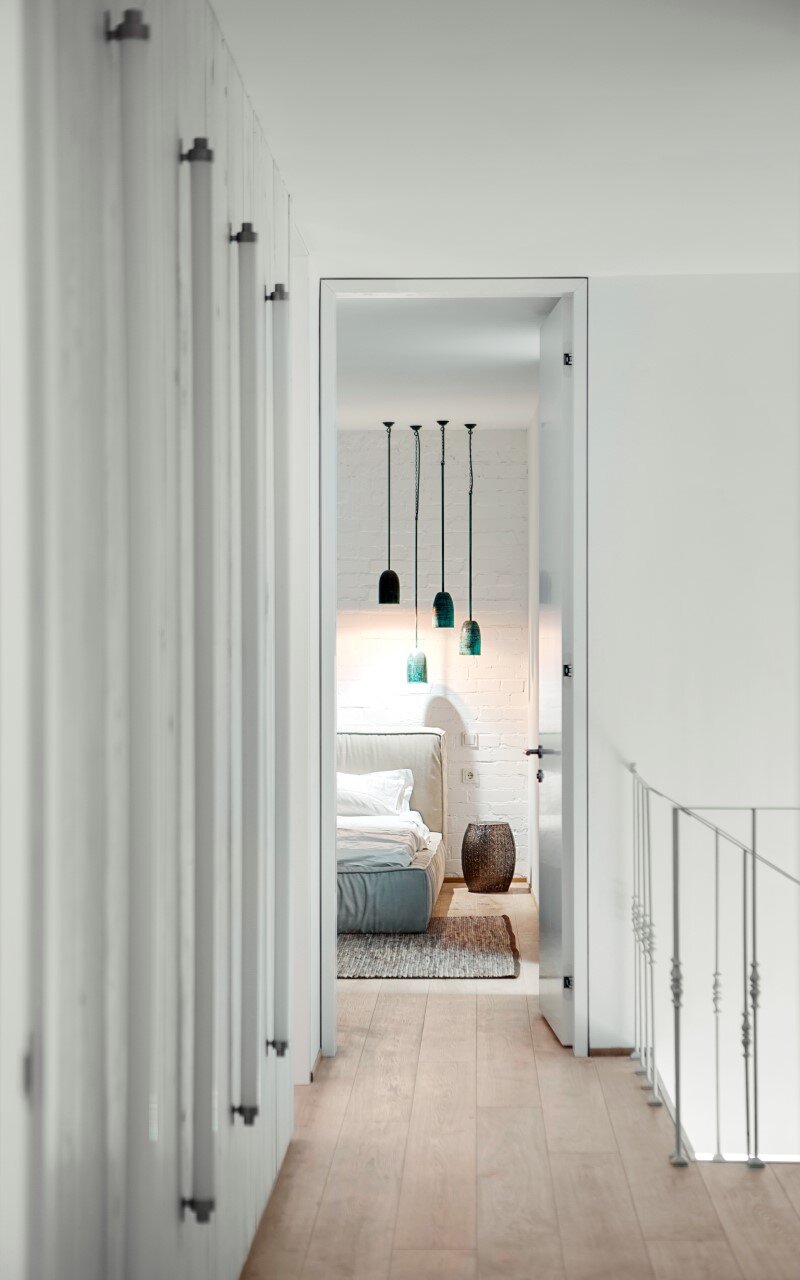 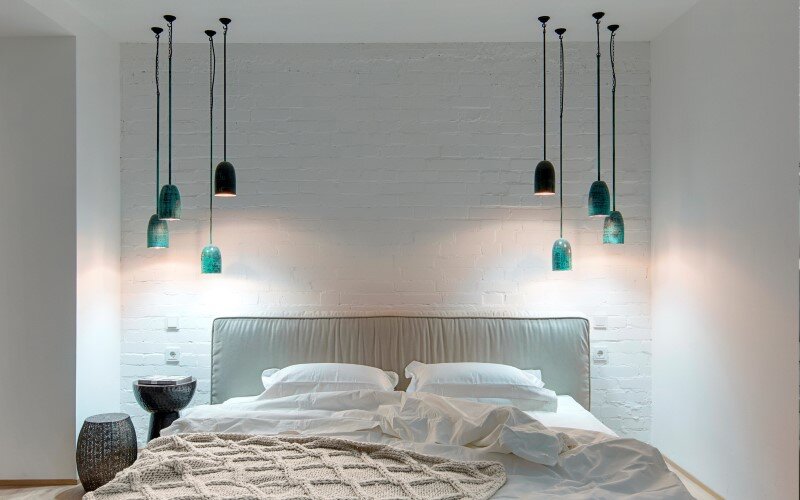 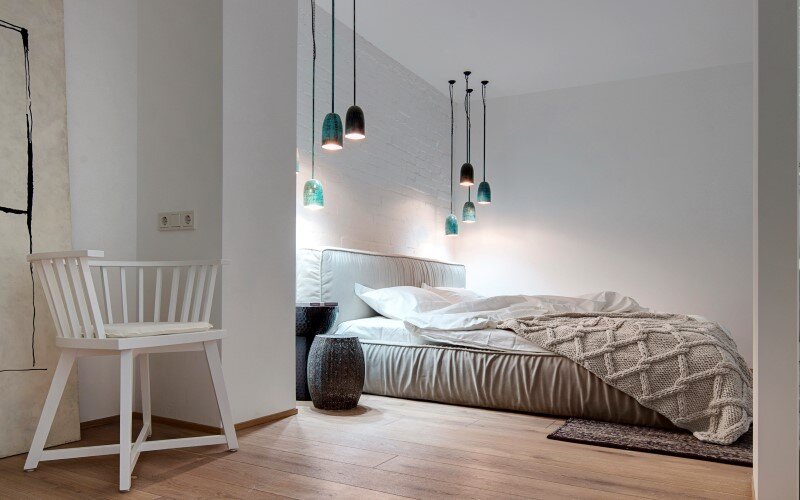 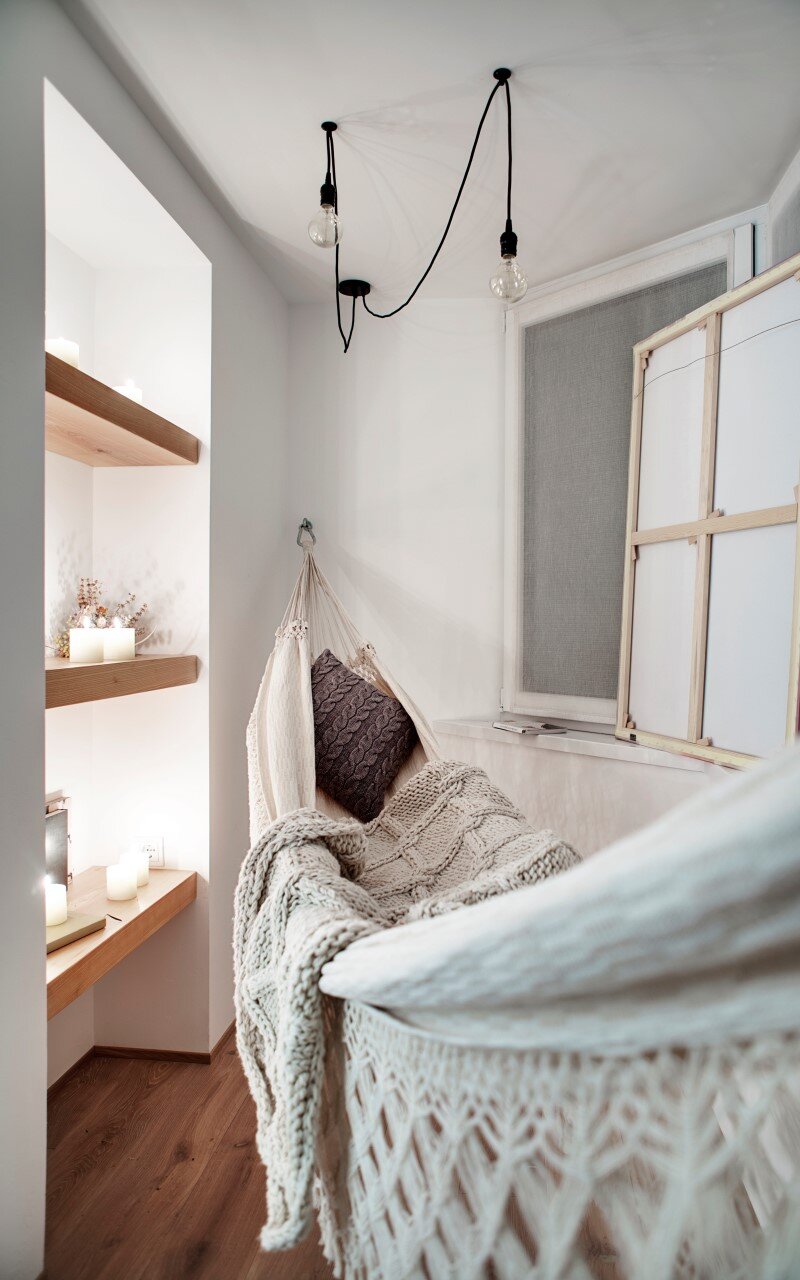 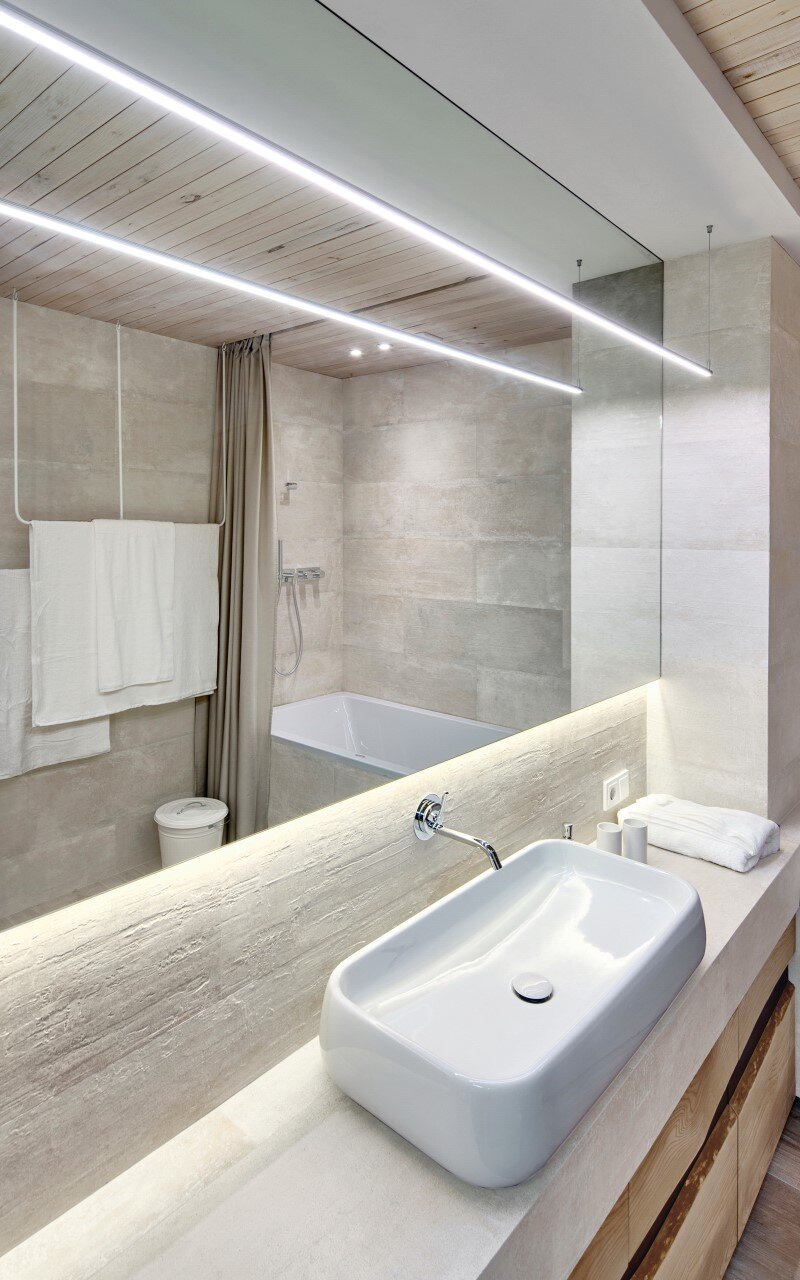 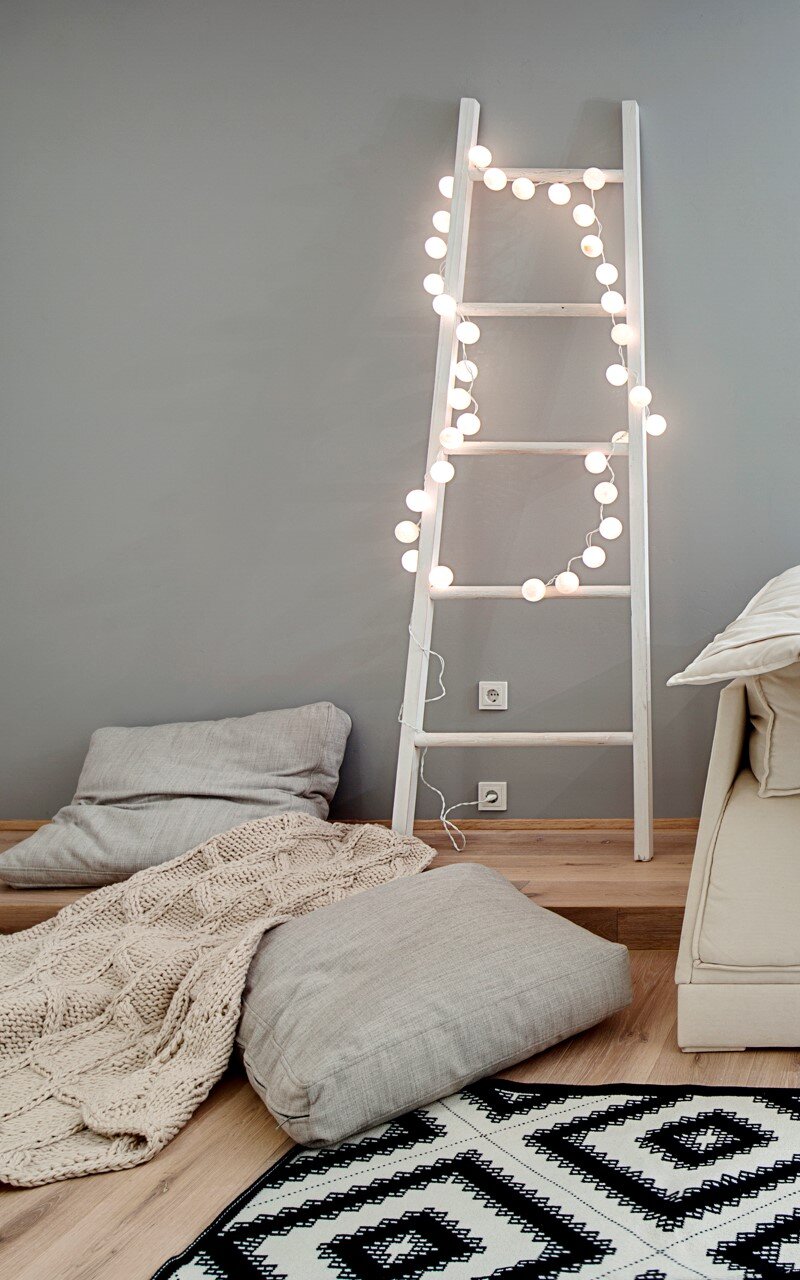 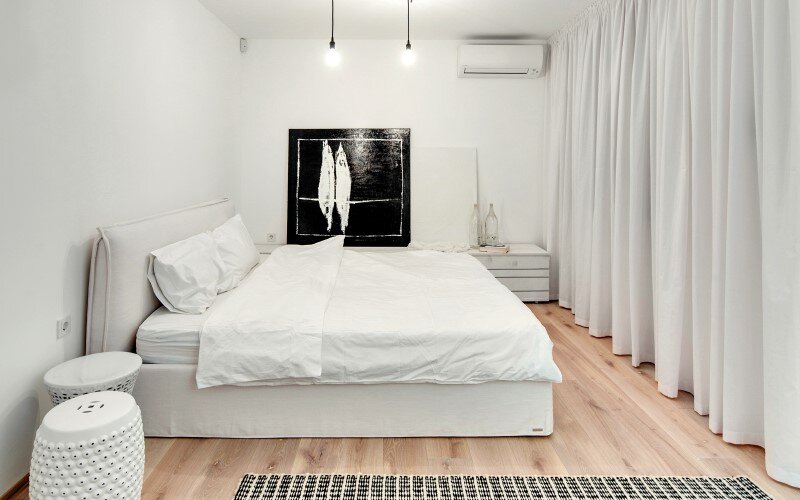 Doshi Levien has created a series of carpets that evoke the glamorous and sensual world of the tribal folk embroidery from India. Doshi Levien...
Read more

Bush House is Inspired by the Feelings of Camping

Coronado Bungalow is a project jointly conducted by Joel Contreras (ContraMark) and Jonah Busick (Foundry 12) in Phoenix, Arizona. Built in 1927, the bungalow has received...
Read more