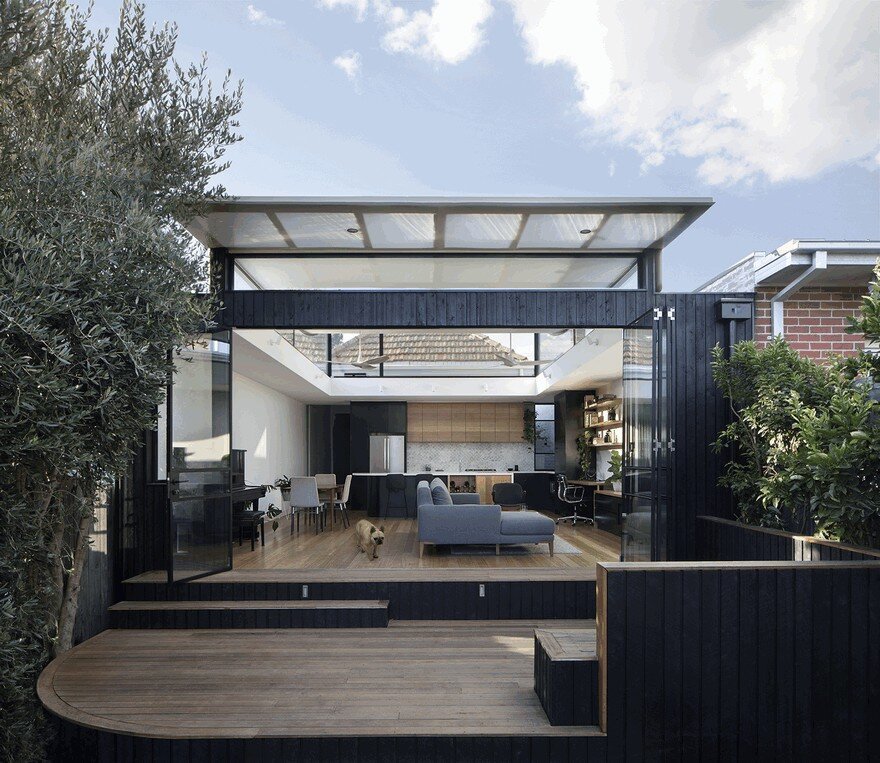 This Northcote House is another in a series of houses in which we’ve employed creative means of getting sunlight into difficult spaces, while creating an uplifting feeling for the occupant. 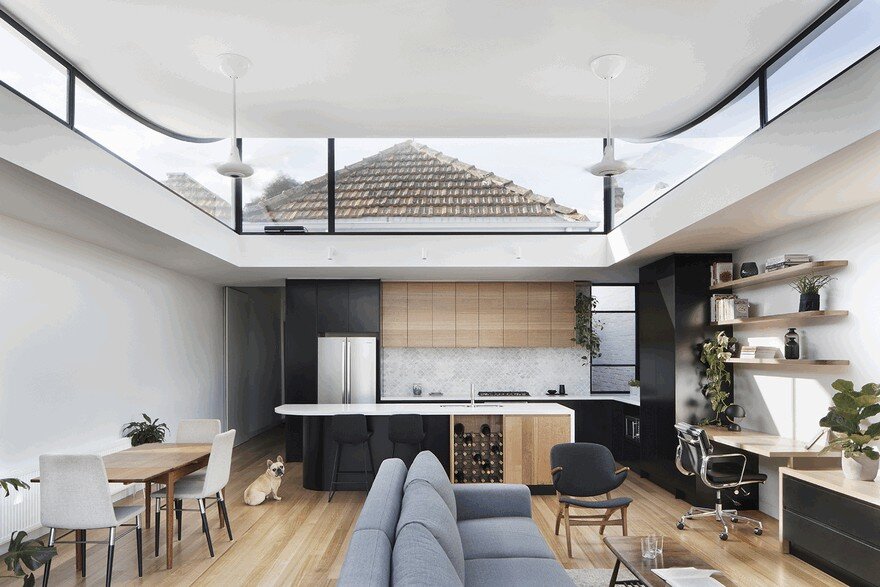 The existing house was on a narrow 6.5m wide block with neighbouring walls built on both boundaries, a heritage facade that had to be retained and with the difficult orientation of north to the front – all of which make it hard to get sun in! 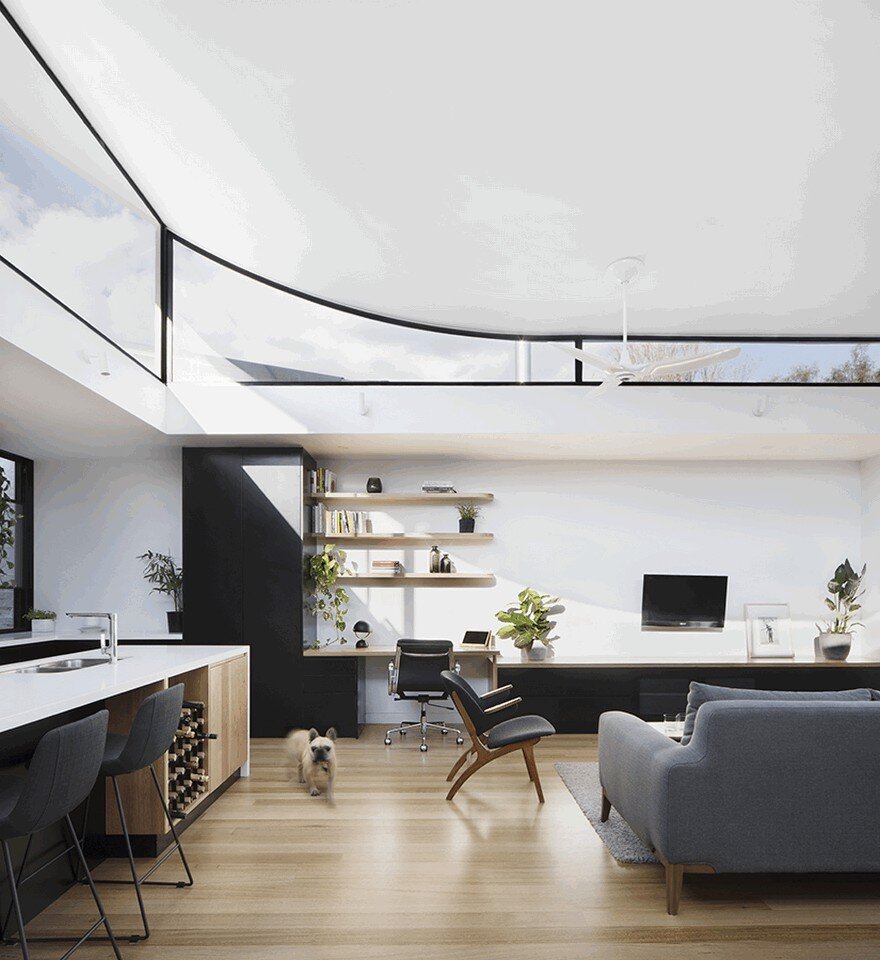 In response to these challenges we popped up the roof and then peeled it up towards the north. The large highlight window brings in warming winter sun and the perimeter of clerestory windows brings light in at all times of the day. 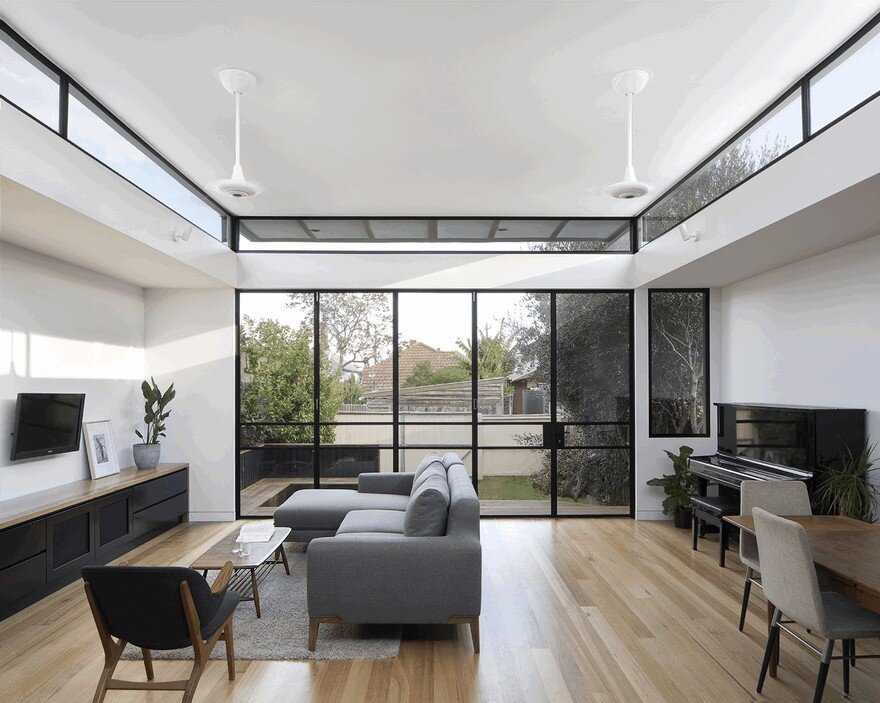 The convex curve of the roof bounces direct sun light down into the living space but also creates an illusion of space. The ramp of the peeled roof directs the eye up and outwards increasing the sense of space vertically while the long tail of the roof cantilevering over the back deck accentuating the feeling of length on a small site. 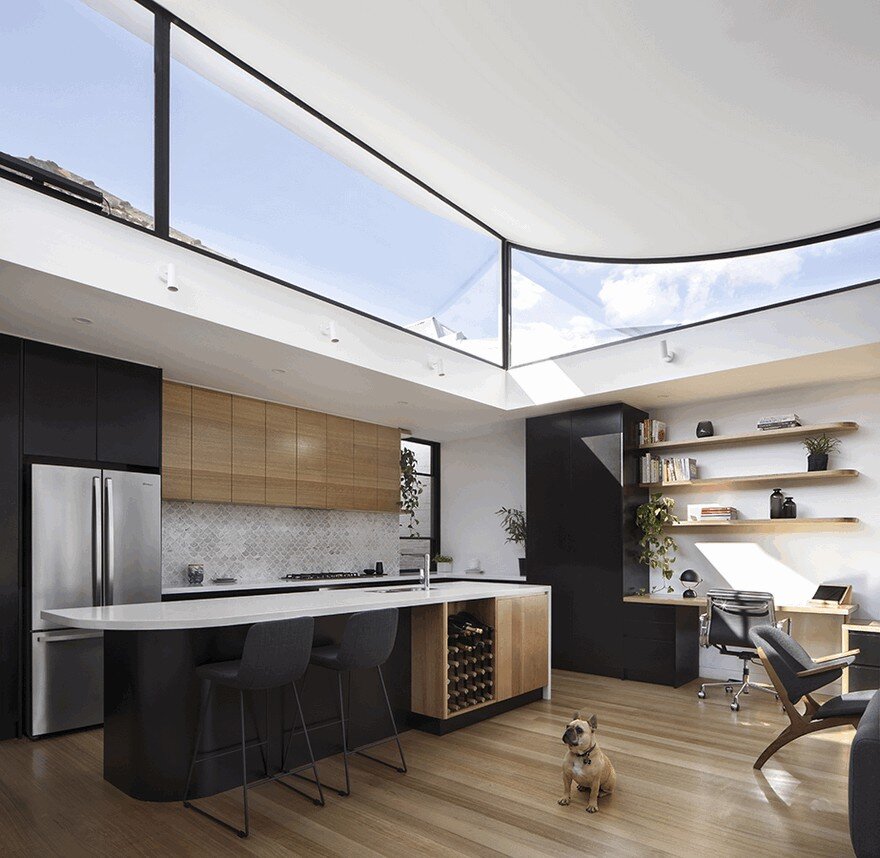 The detailing is carefully considered to create a feeling of floating. The slender structural frame and black steel windows make the roof feel detached. The light coloured ceiling contrasts with the dark solidity of the external walls and cabinetry increasing the sense of weightlessness. 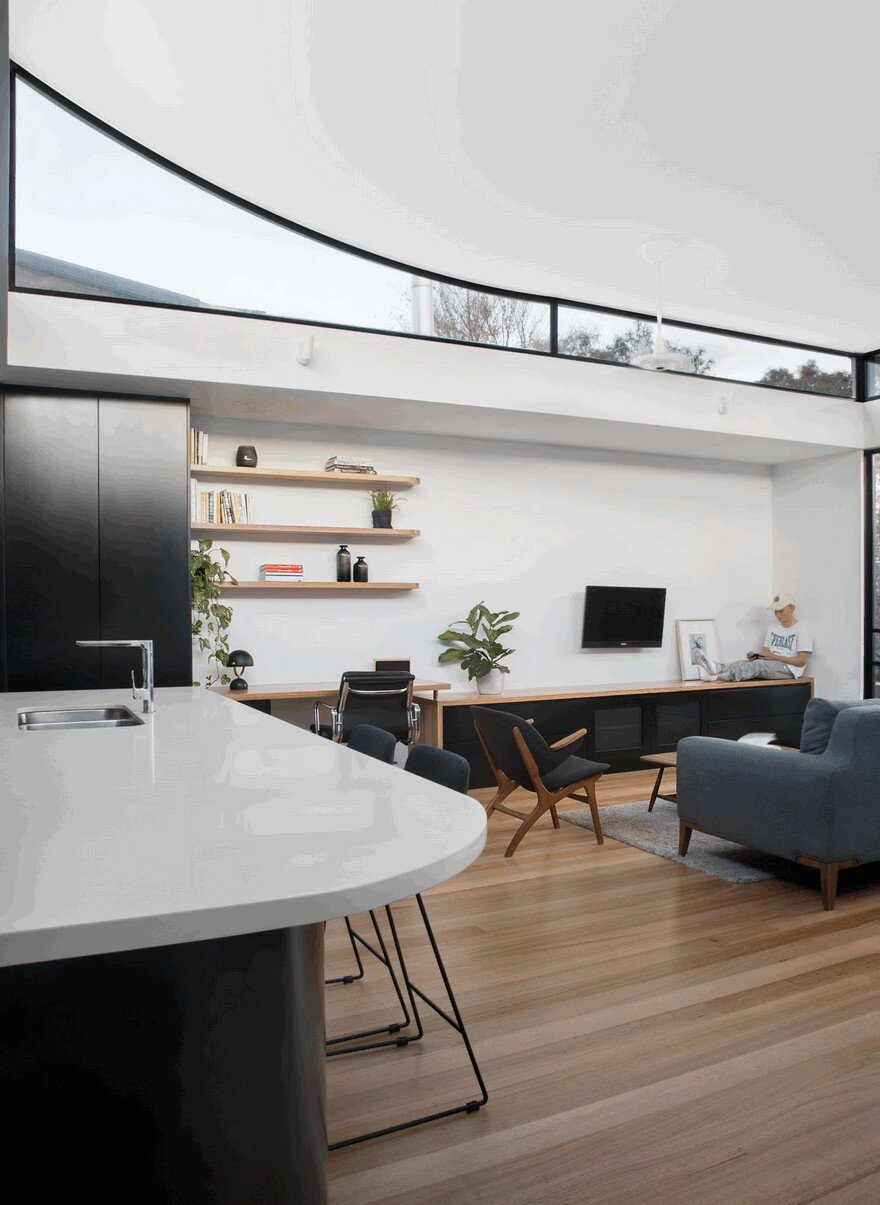 As a result the Northcote house is naturally comfortable, warm and bright and a delight to occupy. 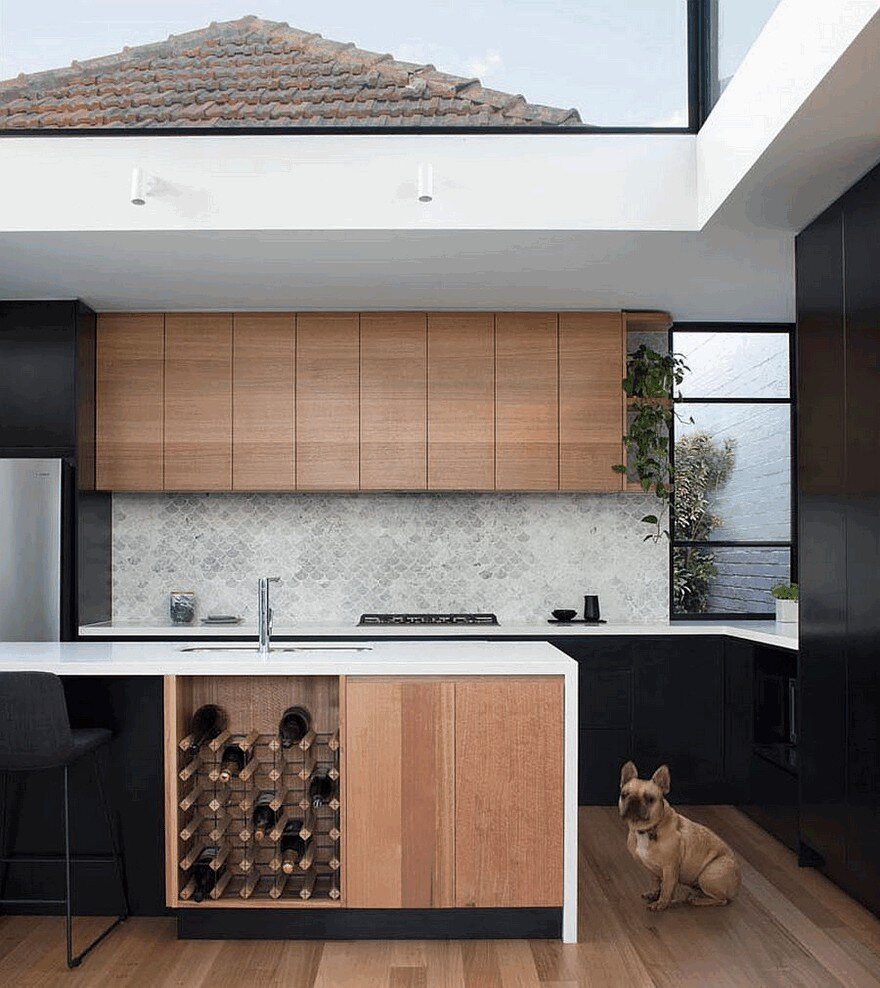 “Ours was a difficult project – a south facing, dark, single fronted terrace with a heritage overlay. Ben’s solution – to curve the roof upwards to allow in northern light – was both beautiful and practical. The design delivered all the things we wanted in our renovation – more light, more space, more openness. But also a stunningly beautiful space to admire every day as well.” – James & Jo, Northcote 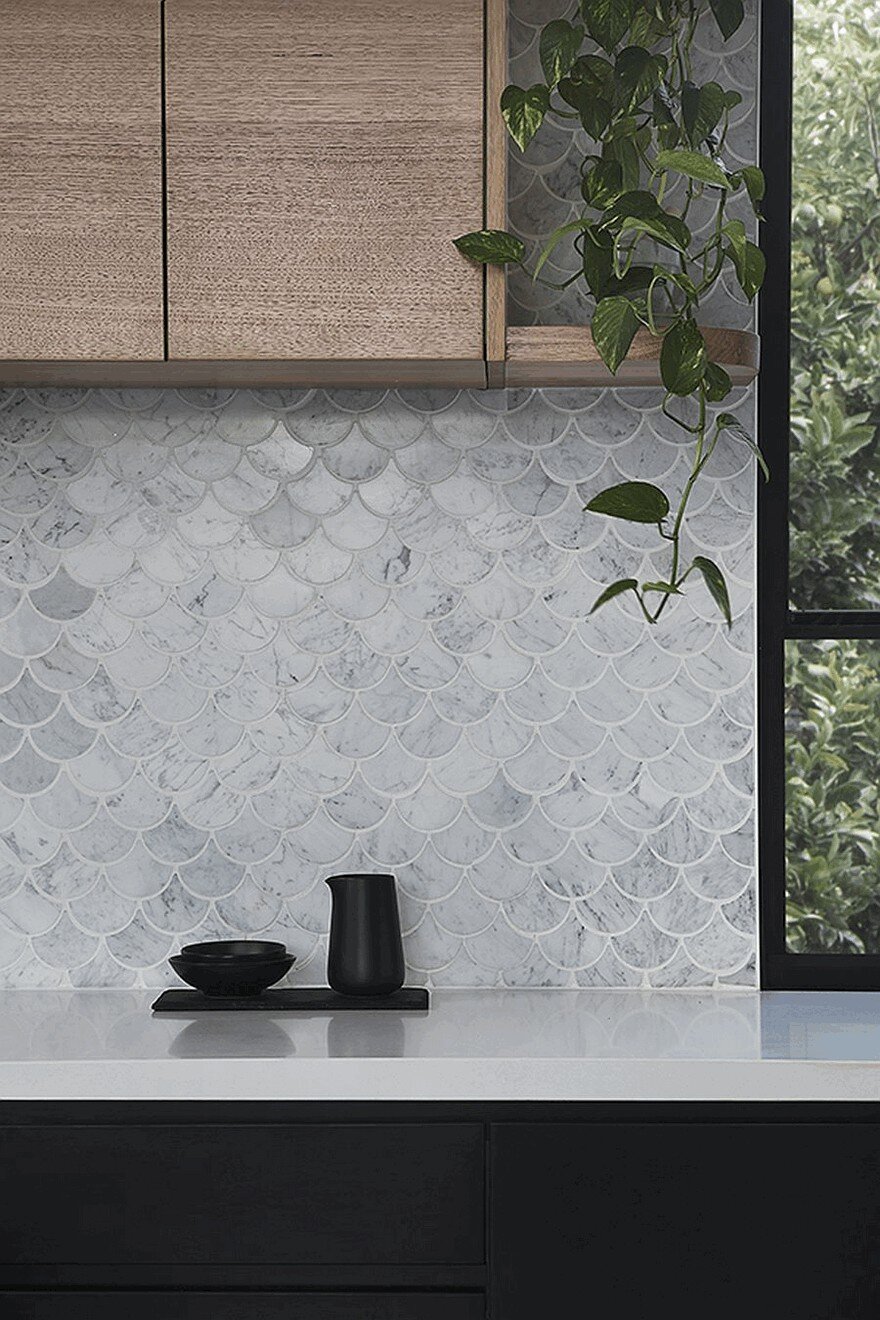 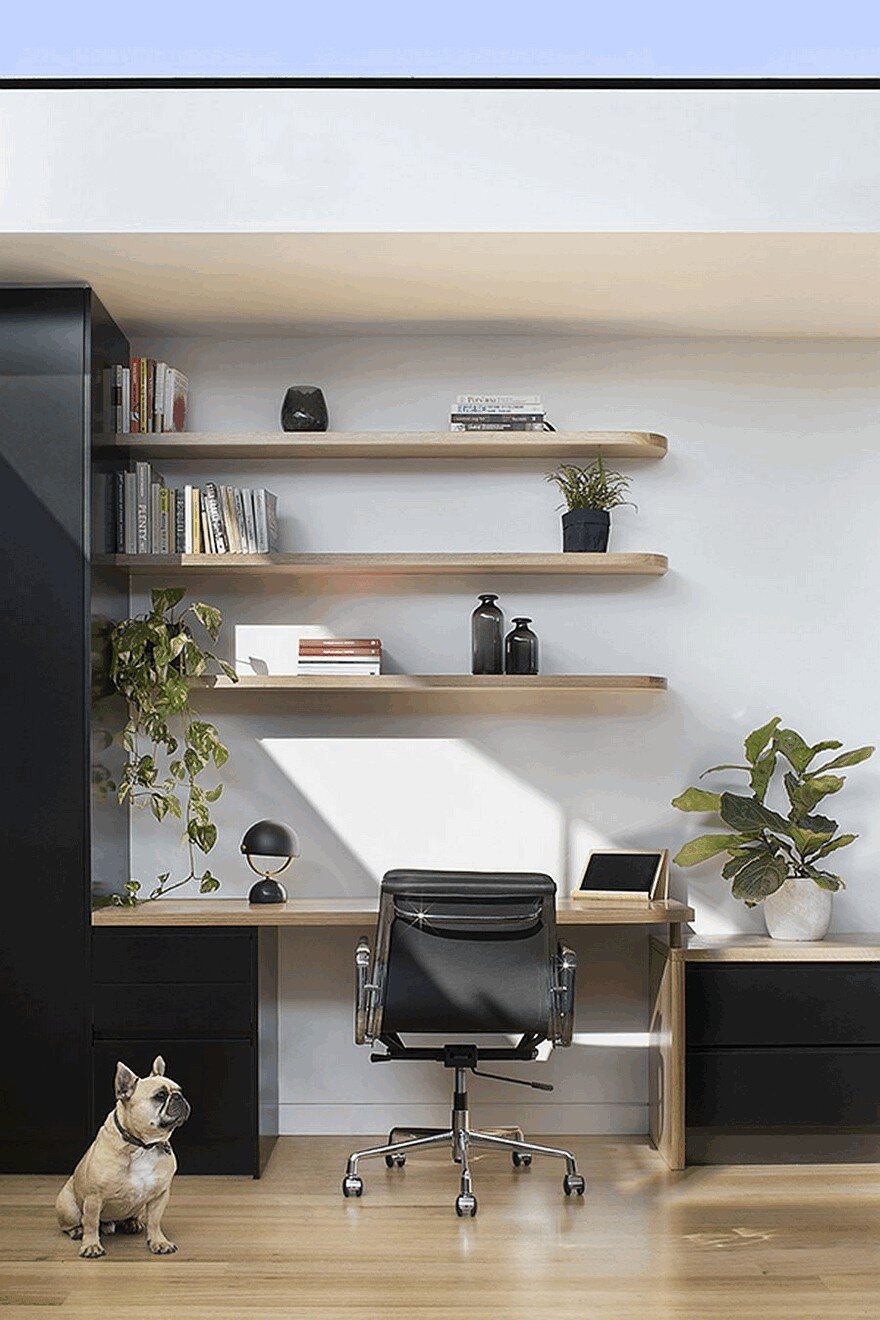 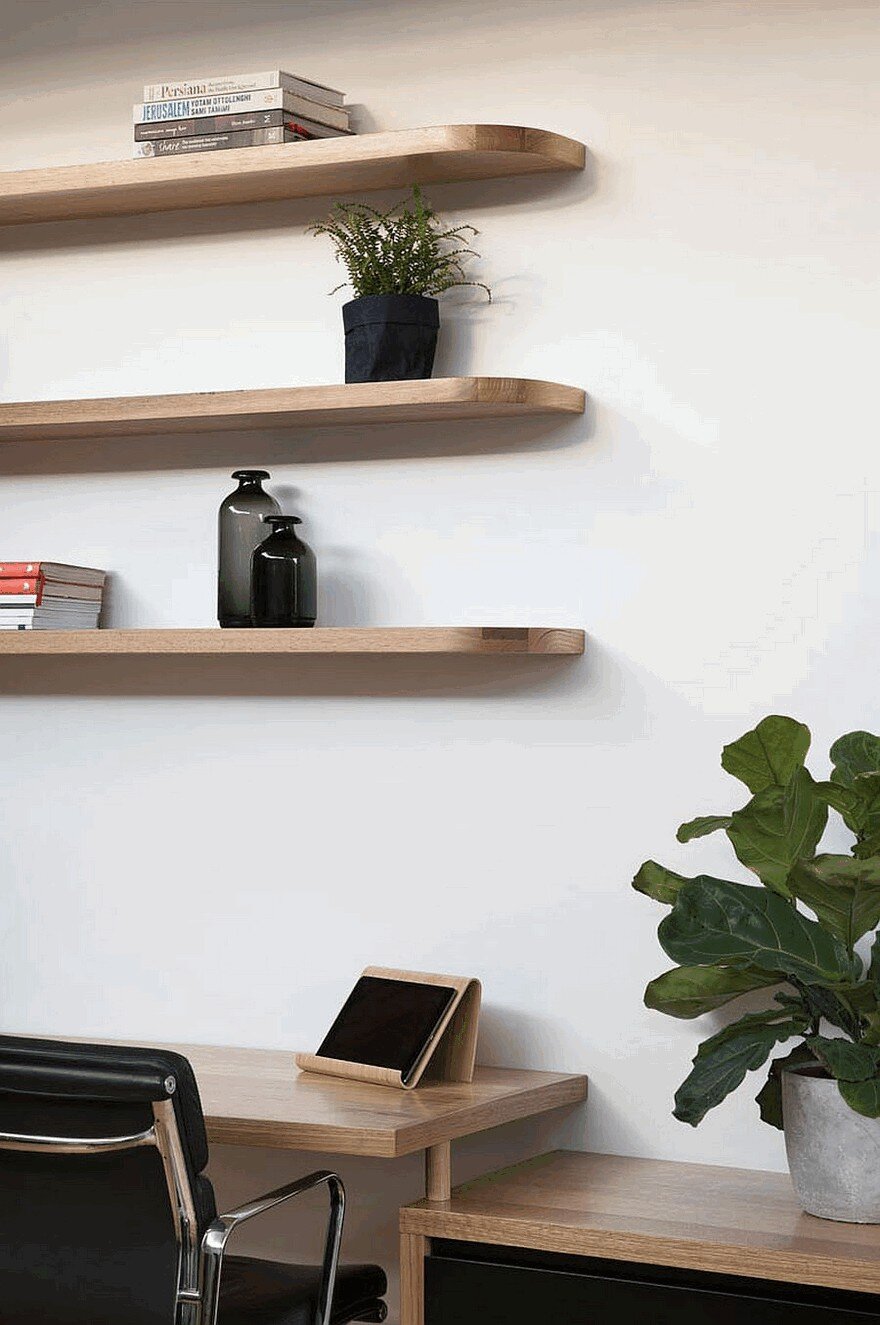 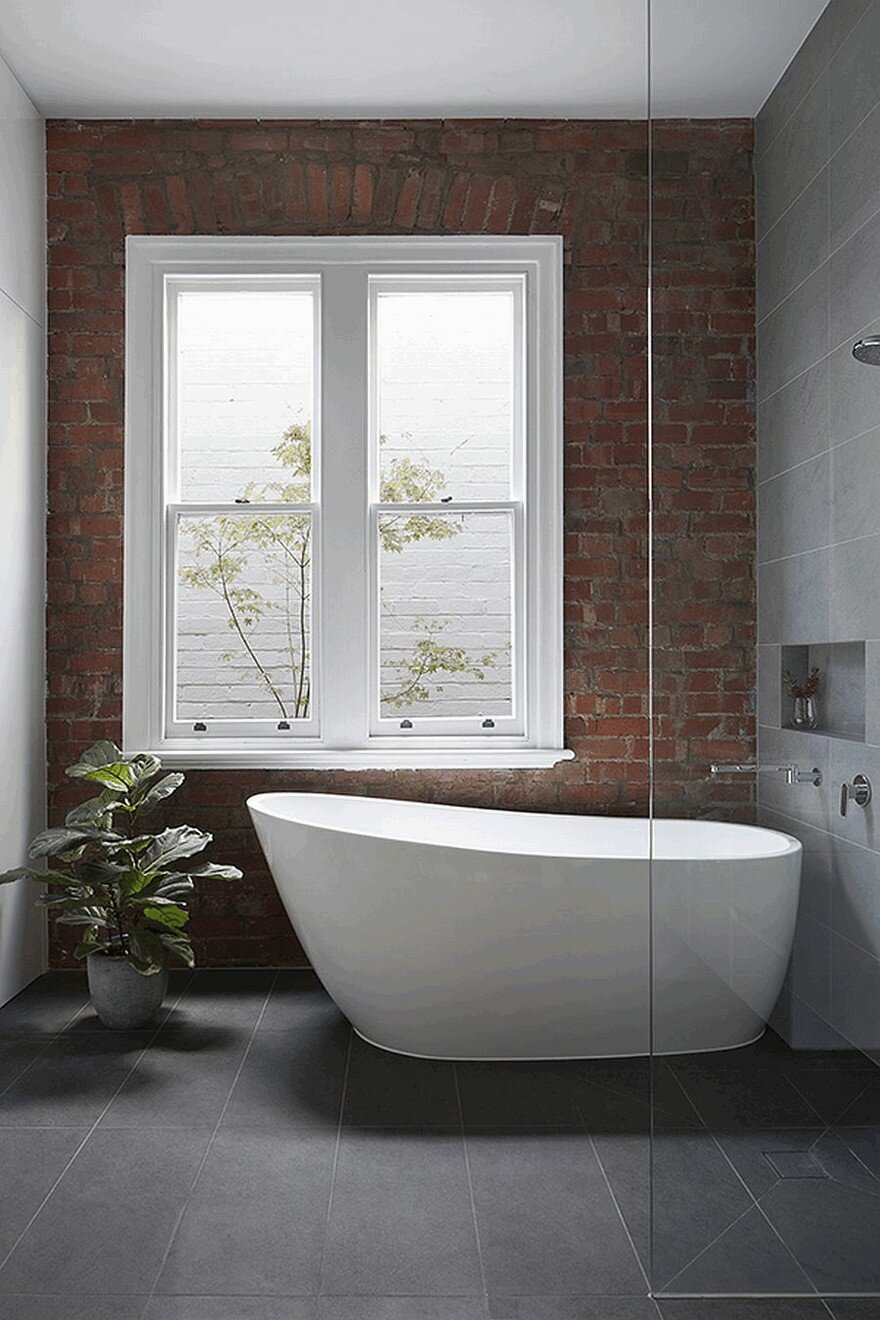 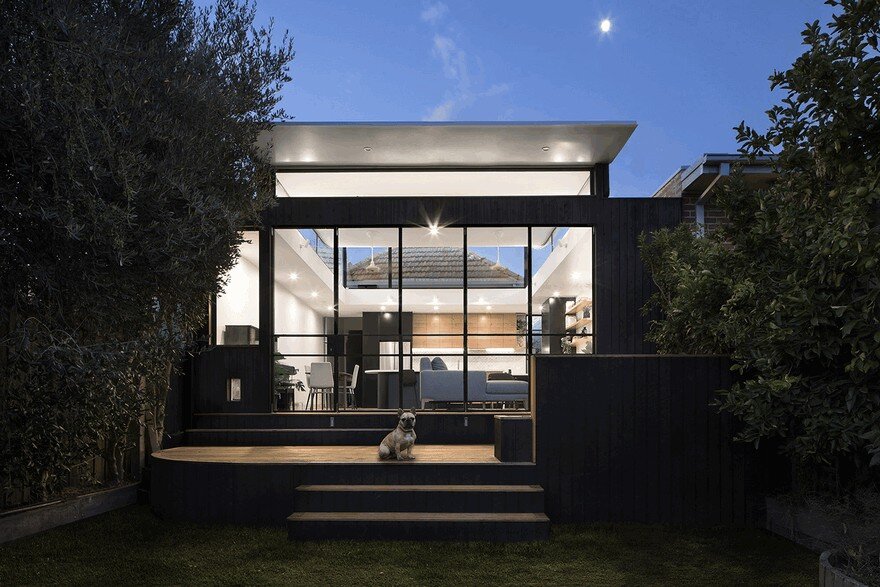 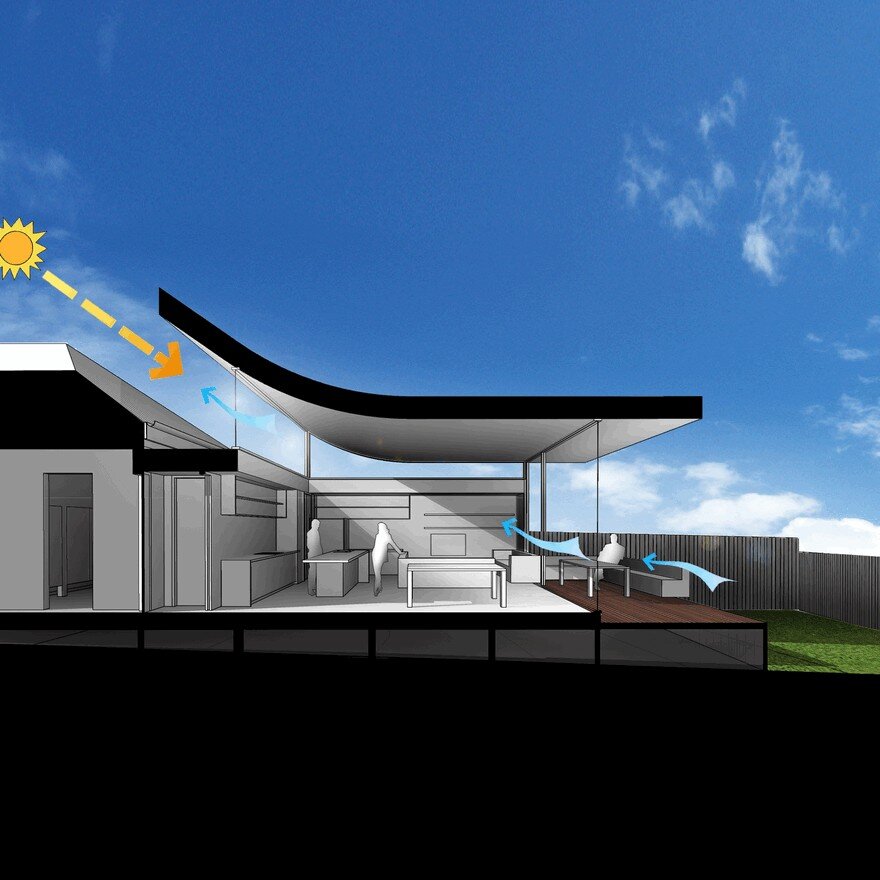 This apartment is located in new building in Dnepropetrovsk, Ukraine. We made a layout of the apartment because there was one entire space. So we got 3 rooms: 2 bedrooms, living room with dining area and kitchen, bathroom. A customer wanted a practical, fresh, original and laconic design.
Read more

Fogo Inn: a timeless piece of architecture by Saunders

The defining characteristic of the Eastwood Residence is its contextual responsiveness. While contemporary in expression, it relates to its Lincoln Square, a historically German and family oriented neighborhood on Chicago’s north side, location in a number of ways.
Read more

Lilian H. Weinreich Architects has transformed the 36th and 37th floors of an existing post-war, residential tower in the premier upper west side of Manhattan, into a stunning 1,800sf duplex renovation. Designed for a retired couple with a love of classical music and ballet, it provides an urban retreat for their frequent visits to NY.
Read more

Les Rorquals Residence has a rustic look. Its architecture is more rural than modernist, closer to the earth than to the sky. It hugs the profile of the terrain. The exterior volumetry is abstract and intriguing.
Read more

Located in Sydney, Darling Point Apartment was renovated in 2015 by Chenchow Little Architects. Project description: Whilst most apartment renovations focus on surface treatments this...
Read more
© All rights reserved. HomeWorldDesign 2013-2020. All images are © each office/photographer mentioned.