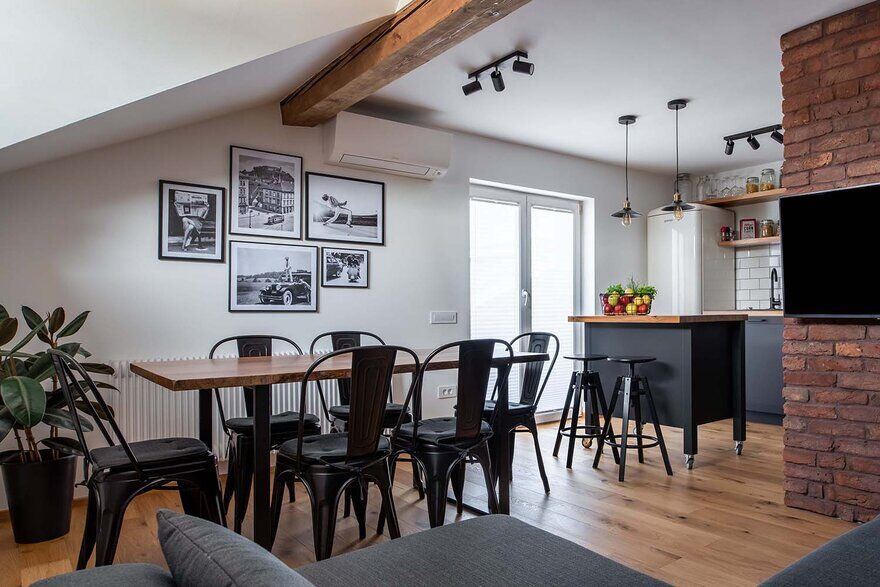 Our investors on the threshold of their thirties wanted to make their first home in a worn-out attic apartment previously used by tenants. Despite a low budget, we managed to design an interesting and comfortable interior, with a good measure of innovation and creativity. With the preservation of some old elements in the interior and a clever reuse of materials we have recreated our client’s desire for an industrial home – Apartment Under the Roof – one that can be found in any of the world’s metropolises. 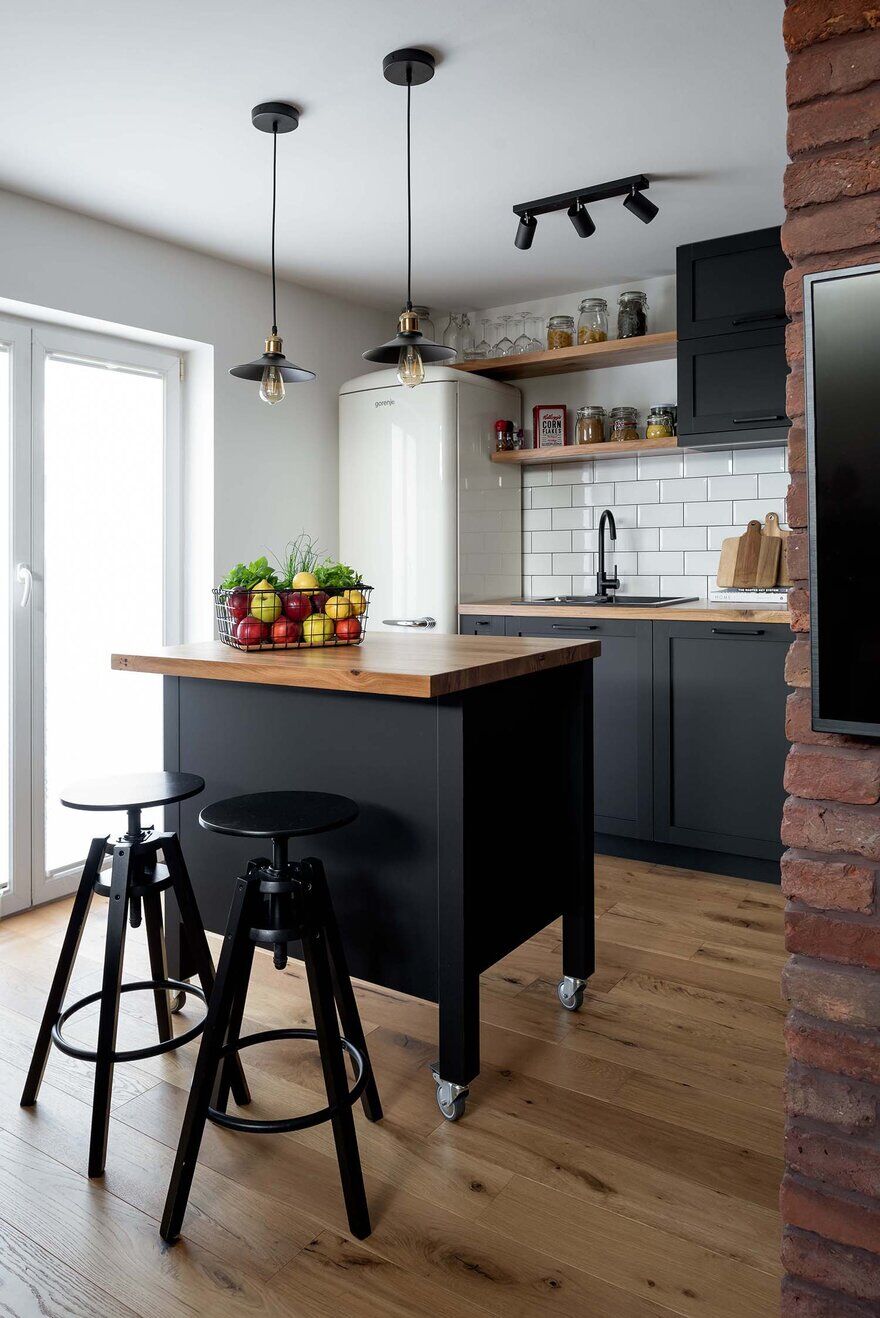 For the most part, we wanted to avoid demolishing existing walls in order to minimize the costs of renovation, while the attic slopes presented an additional challenge. The existing attic ceiling was causing problems with moisture and therefore had to be demolished and replaced. We had to remove an old worn-out parquet, level the floor and change the existing electrical cables and plumbing which in part enabled us to better use the given space. With the only new aperture we tried to visually open the space and improve on the existing fluidity while creating a new spatial element that was used as a basis for our new design. 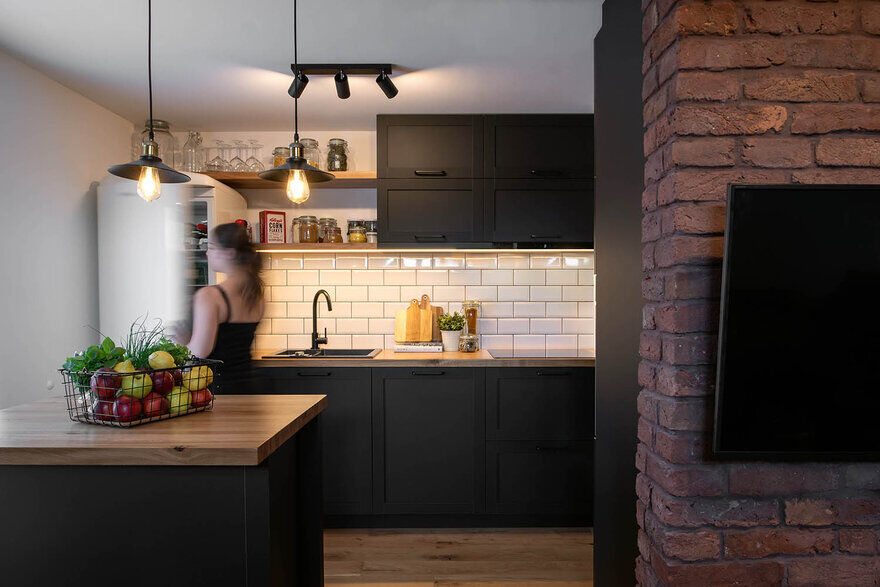 The spatial layout was designed around our new centrepiece element – the central wall, which was cladded with old recycled brick masonry and is visible from all sides of the apartment. Masonry was recycled from a demolished industrial building and with a bit of effort cleaned, cut and reused. In particular, we made a decision of using a filler with a similar colour as the masonry – this move honestly shows that the cladding is an aesthetic addition, furthermore it doesn’t visually saturate a relatively small area. The central »brick wall« became a kind of genius loci of this new home, a modern fireplace around which all spaces form. This central element becomes a meeting and socializing point, simultaneously separating the sleeping part from the living space, in addition it opened and connected the space (both visually and functionally). It integrated into a visual whole three most important spaces of each home – the kitchen, the dining room and the living room, which can be adapted to the everyday needs of its users. Consequently, the living room with its large sofa can also be used as an additional bedroom for guests, while a special movable kitchen island that primarily serves as a storage and additional counter, can be used as a breakfast counter or altogether moved aside if additional space is needed in the dining area. 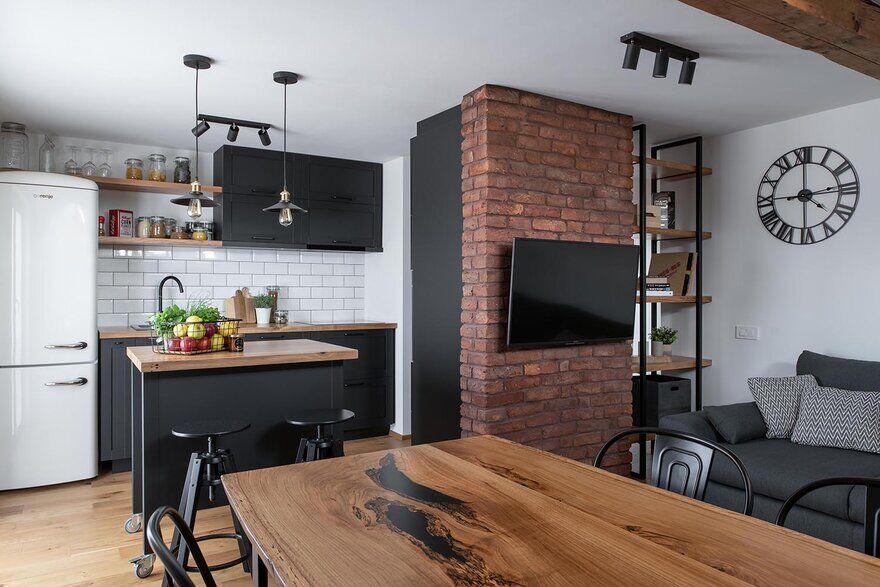 With the reuse of old logs that have waited for a long time in the workshop of our client’s father, an additional patina and sentimental value was added. With a bit of help from skillful carpenter’s hands they were given a new shape and purpose in the form of a dining tabletop, kitchen counters and shelves. Thus, with using recycled materials such as old bricks, dark metals, natural wood and a careful selection of contrasting color tones, we created a cozy and warm home with an industrial flair that serves as a backbone and a starting point for new memories. 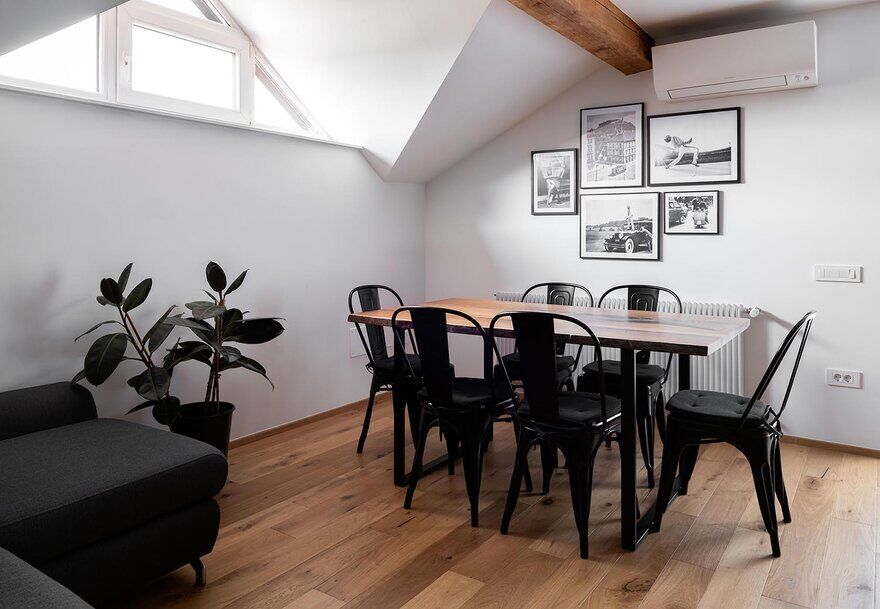 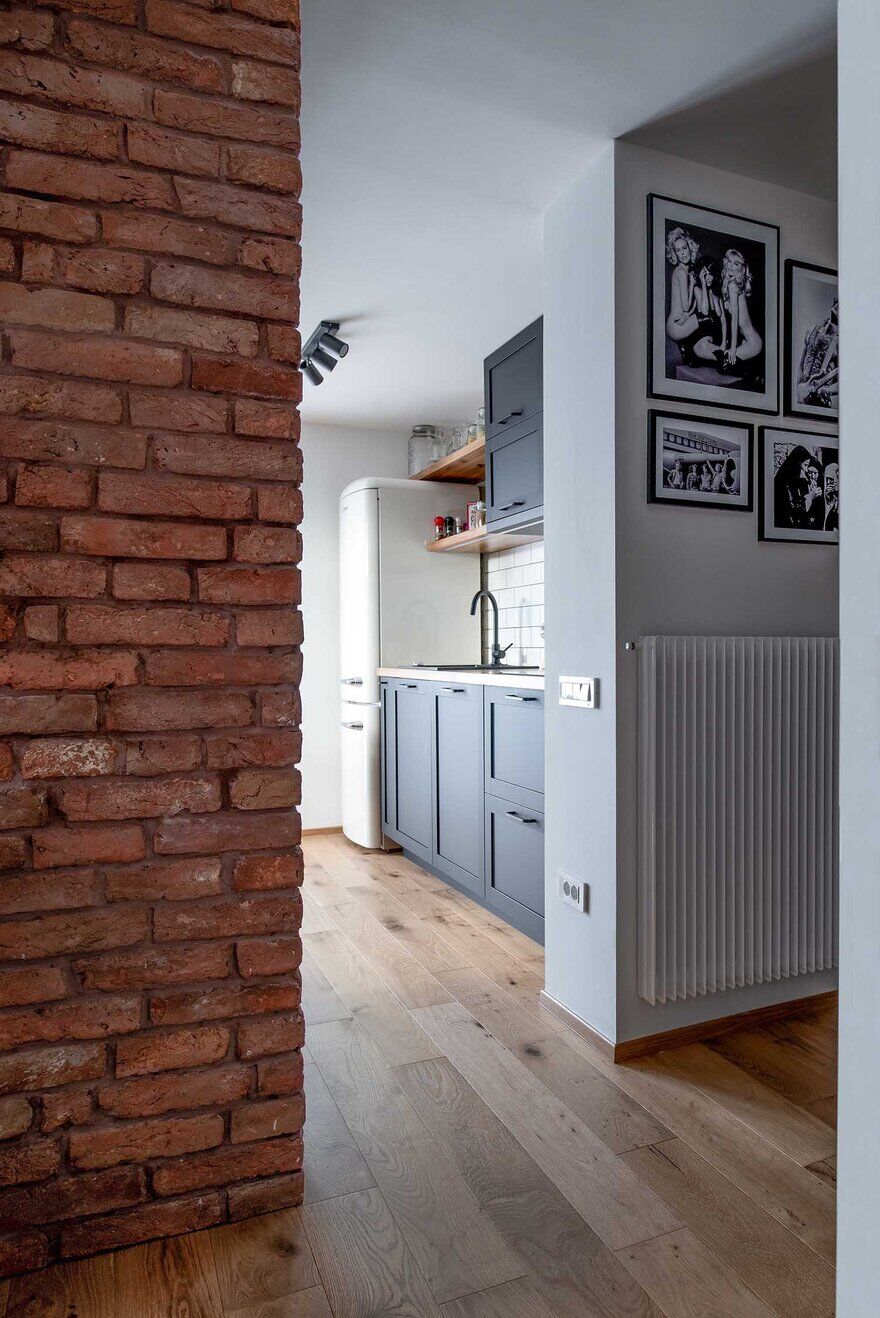 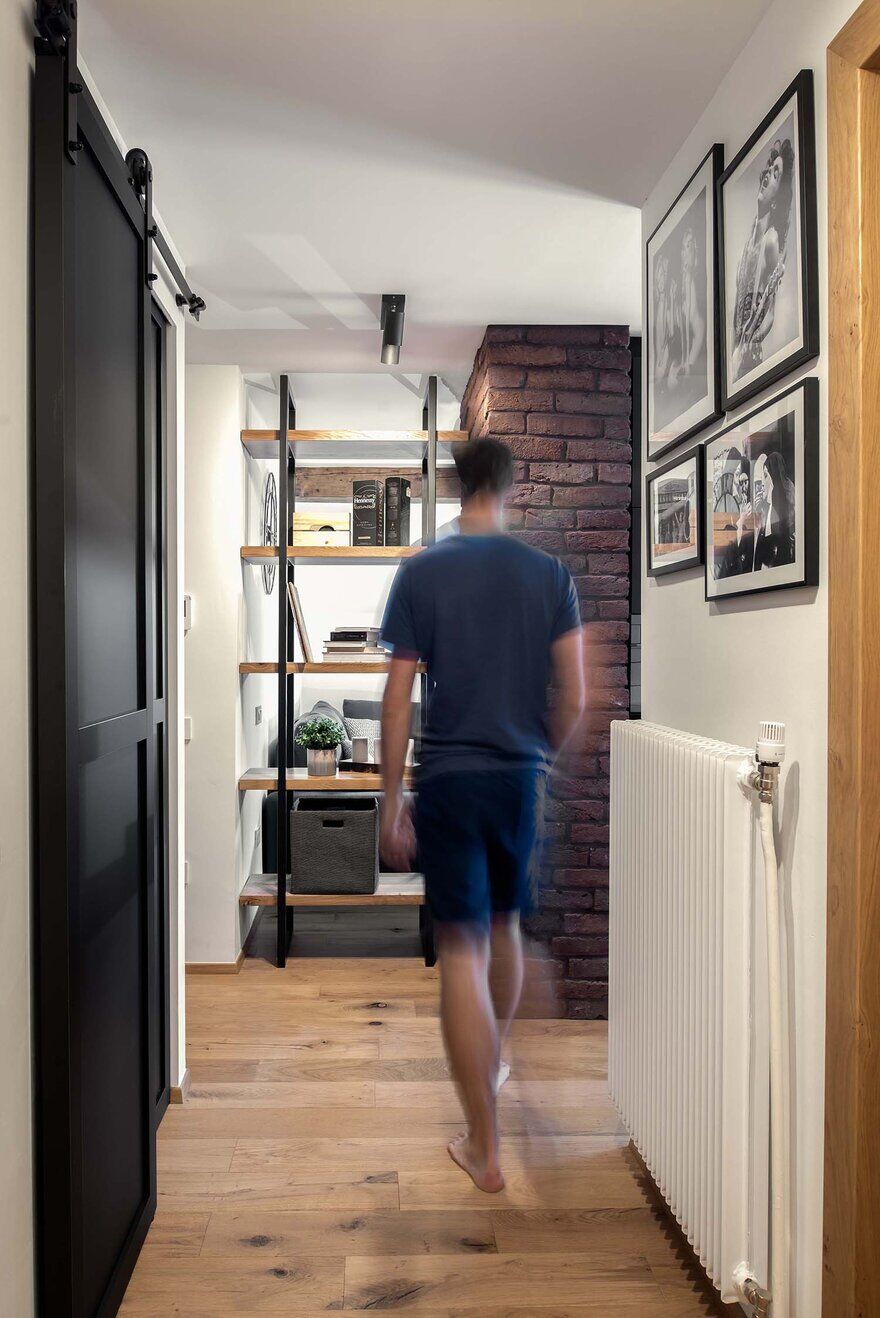 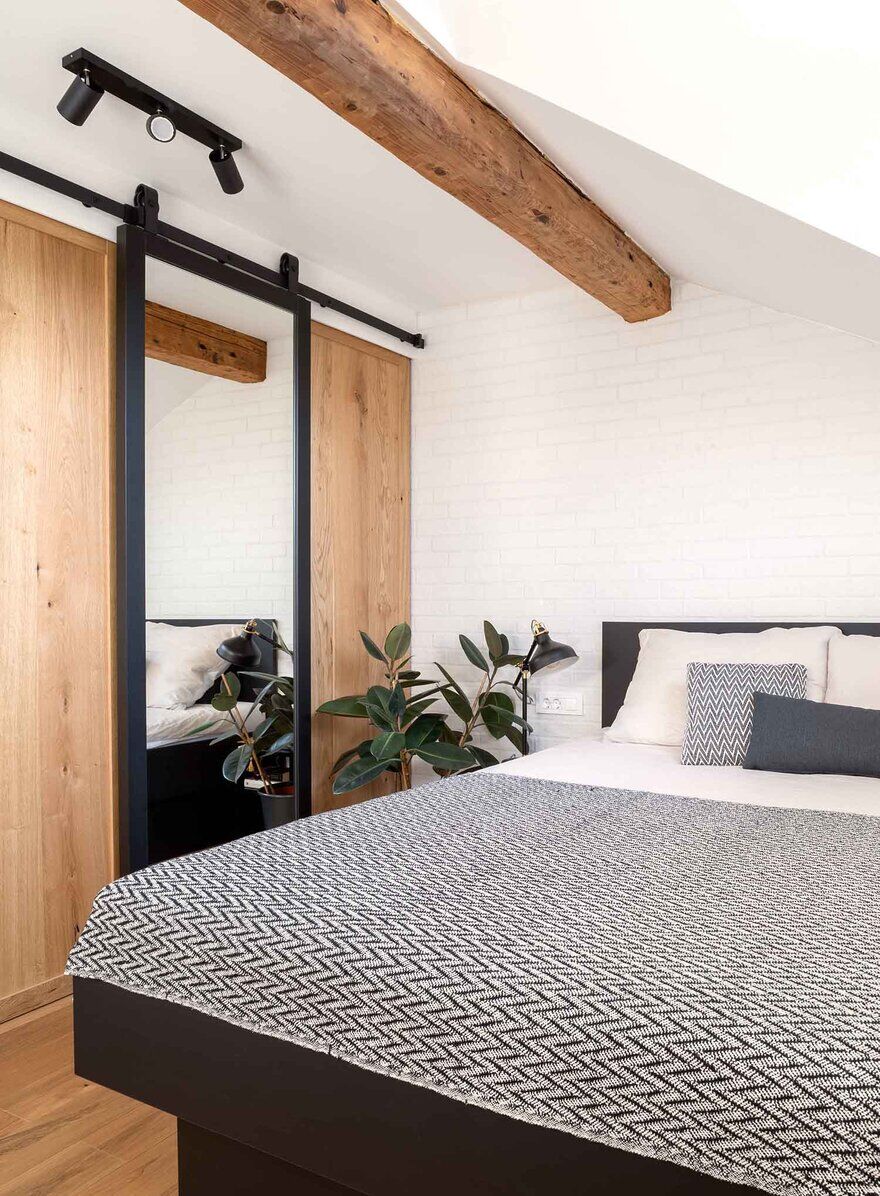 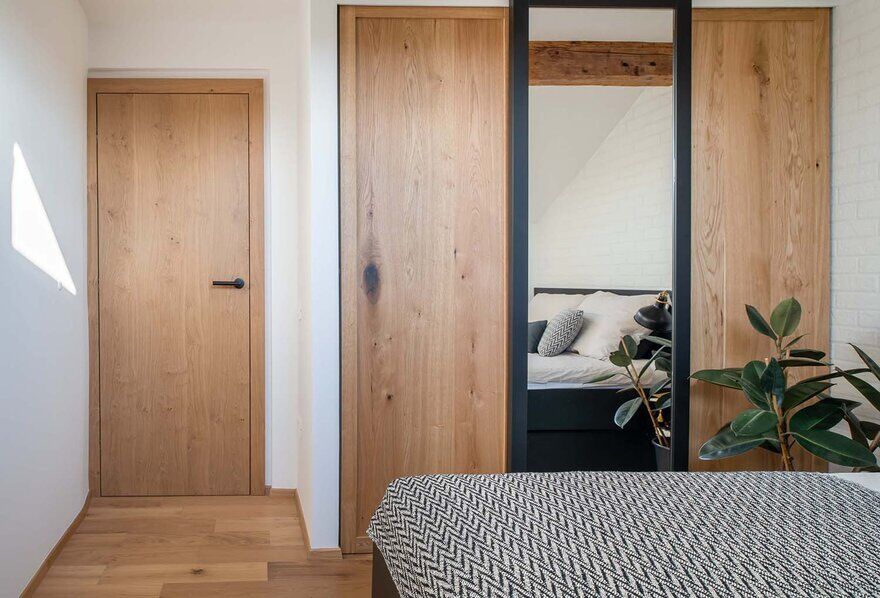 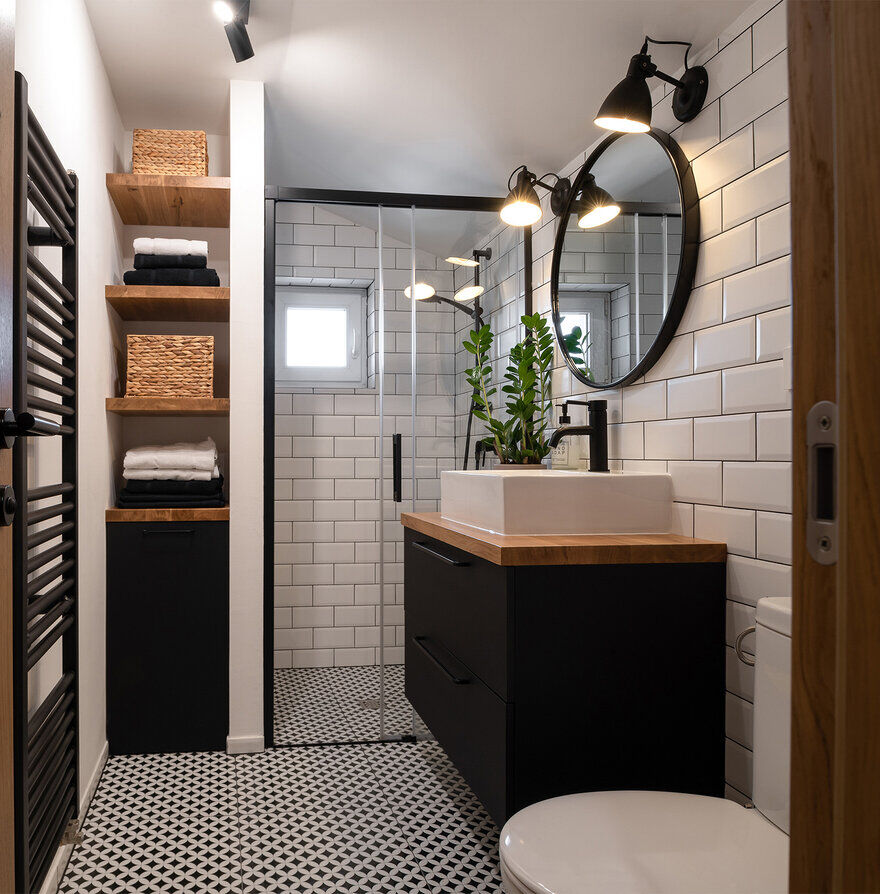 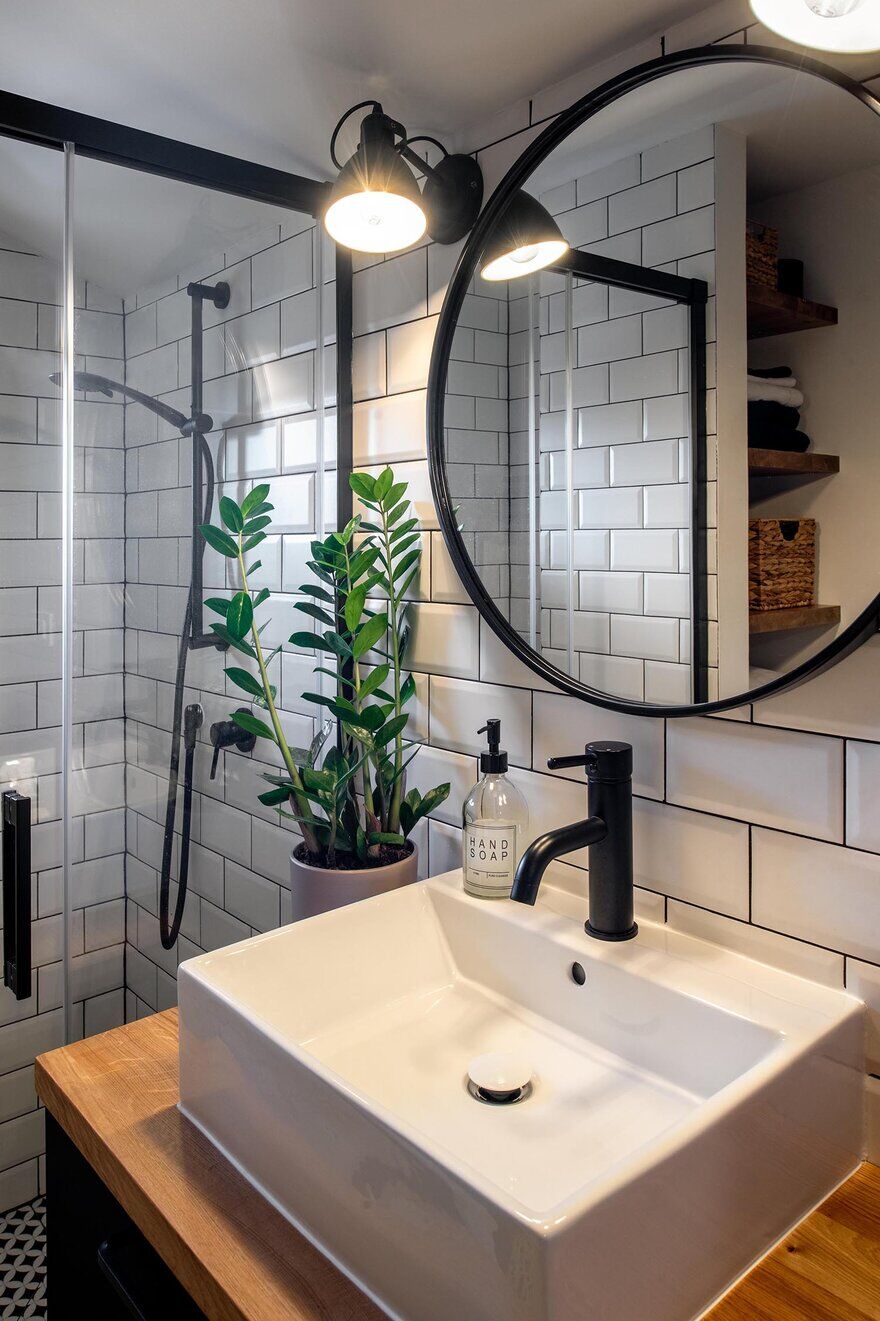