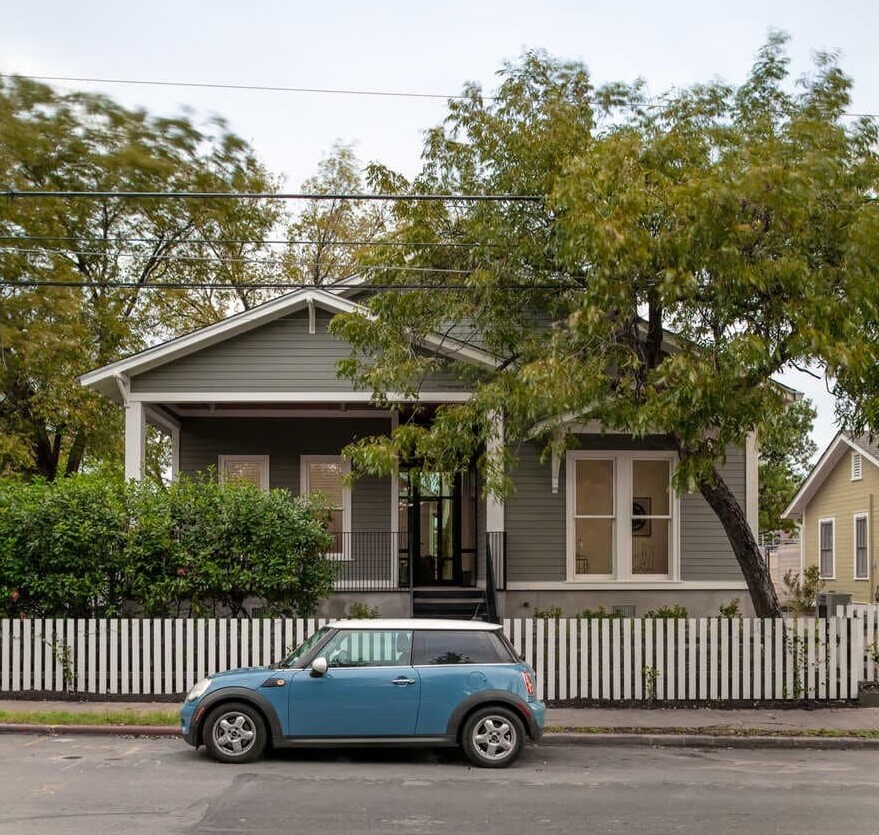 Austin Dogtrot House refurbishes a bungalow from 1926 which has undergone numerous renovations. Surveys indicate that the house was originally a two-unit “dog trot”, a uniquely American typology, here re-interpreted in a contemporary configuration. 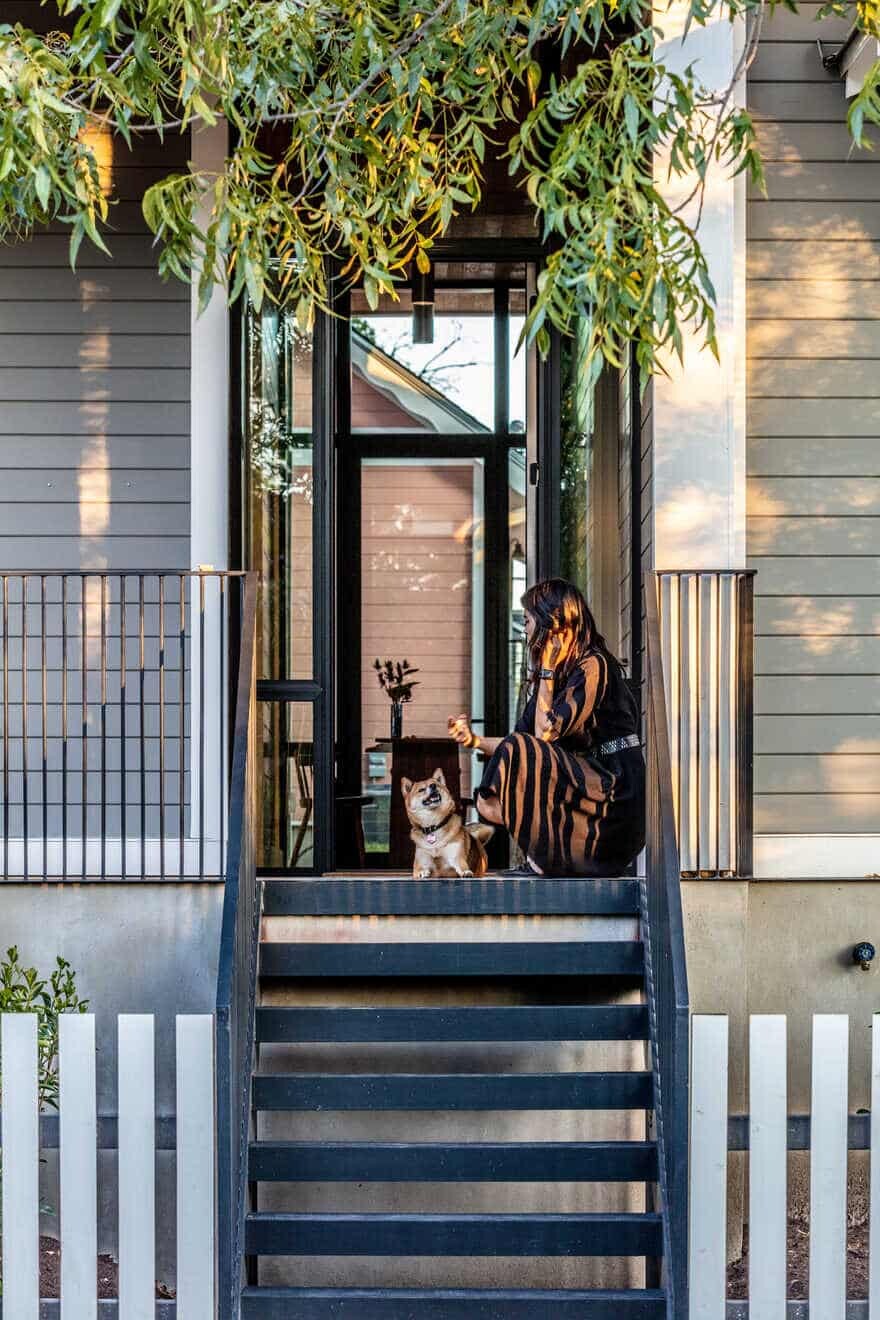 Four independent ‘cabins’ sit between a deck and a roof. These units articulate two breeze-ways, ‘trots’, that separate functions and bring exterior features to the interior. Each cabin is singularly tasked for either Living, Cooking, or Sleeping. One trot accommodates the open tasks of dining and office, while the other serves as an axis between the front and back doors. 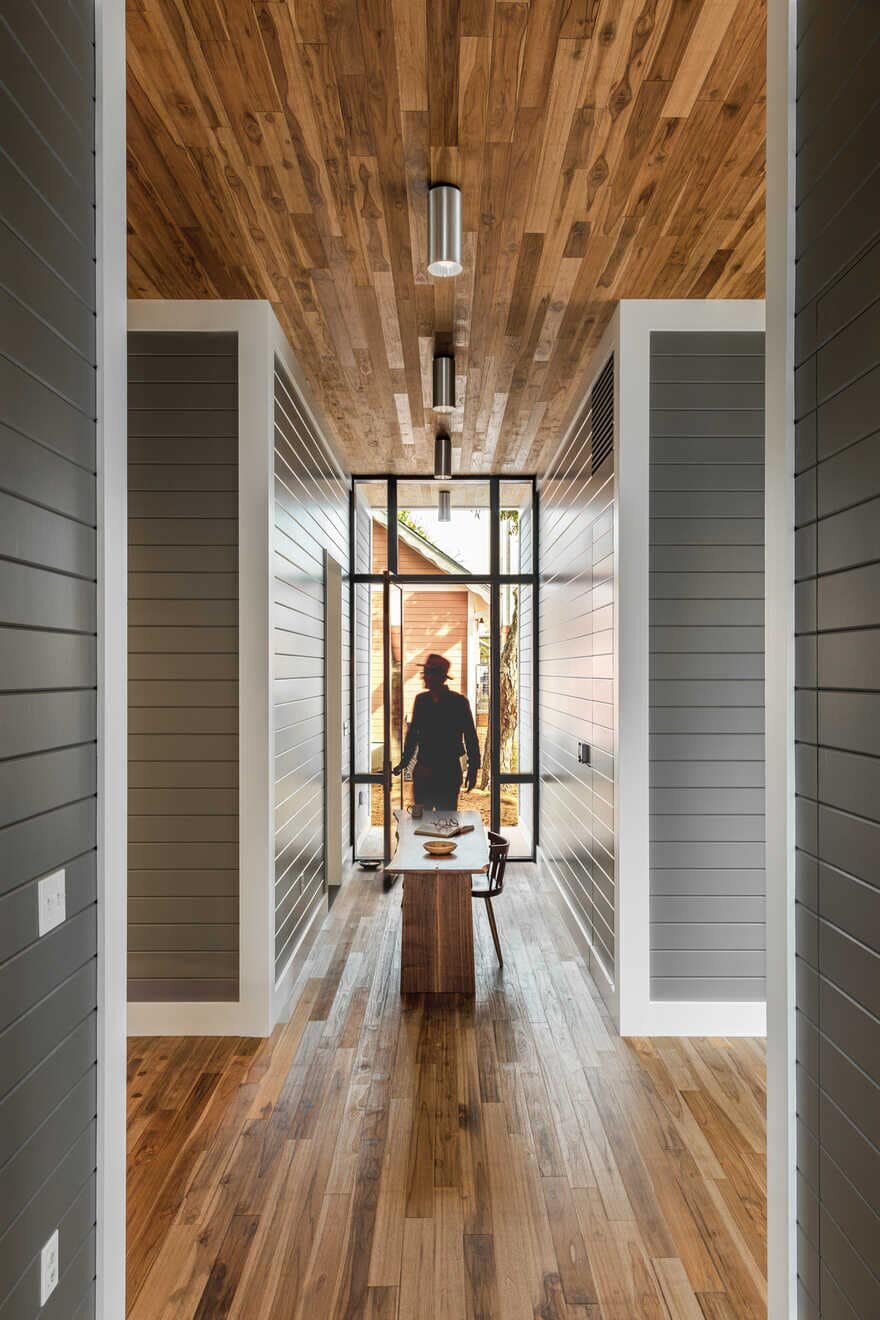 Movement between cabins requires passage through either Trot via thresholds that are identically detailed on both interior and exterior. To reinforce the independence of these cabins, traditional clapboard siding and overlaid trim are contrasted with contemporary full glazing at the end of each Trot – creating a void between each unit, and allowing passage of light and breezes. 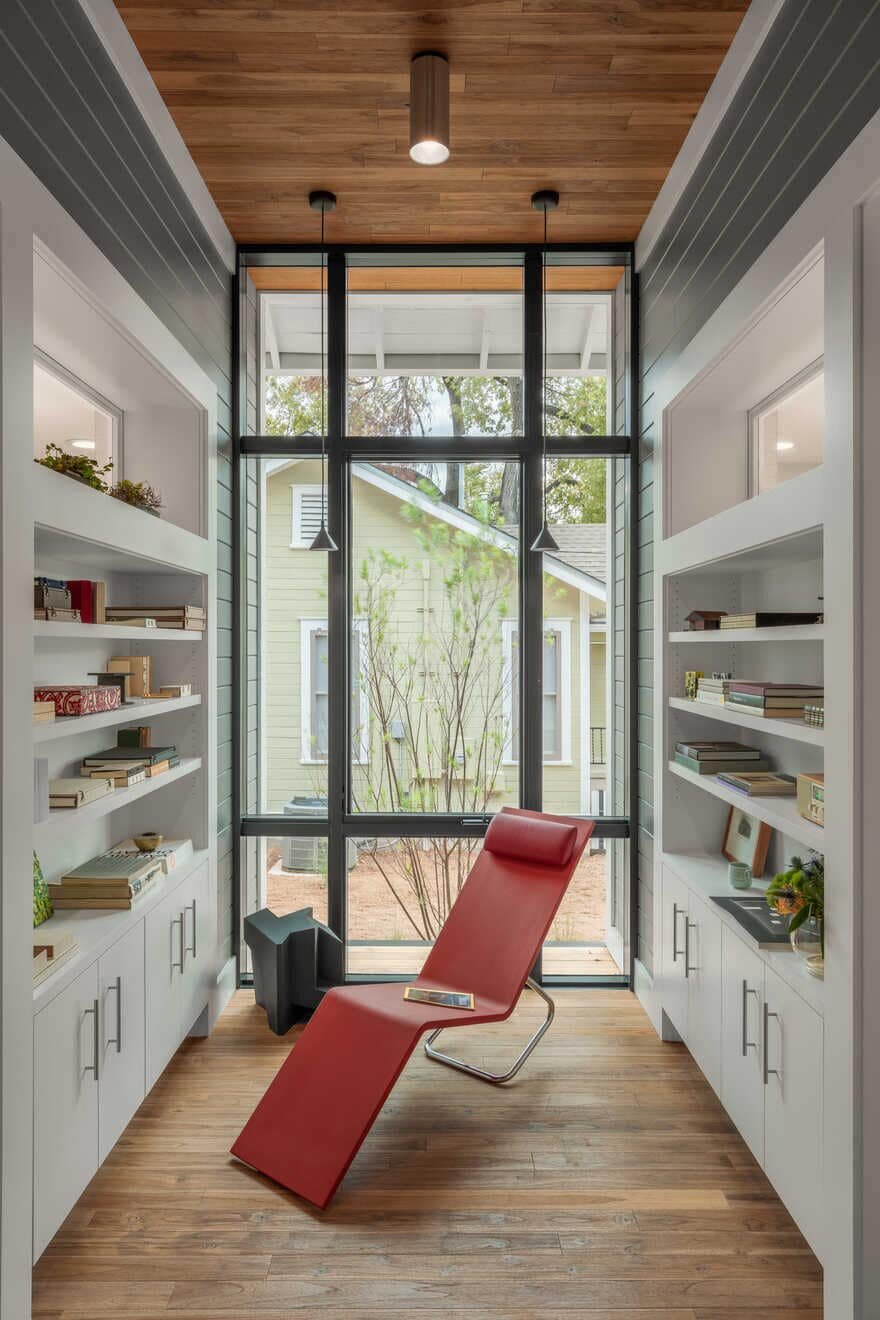 What are the sustainability features?
The project was an adaptation to an existing bungalow. Keeping as much of the existing building fabric as possible (foundation, roof, studs, diagonal sheathing) and limit waste was adopted early as a crucial sustainable first step. 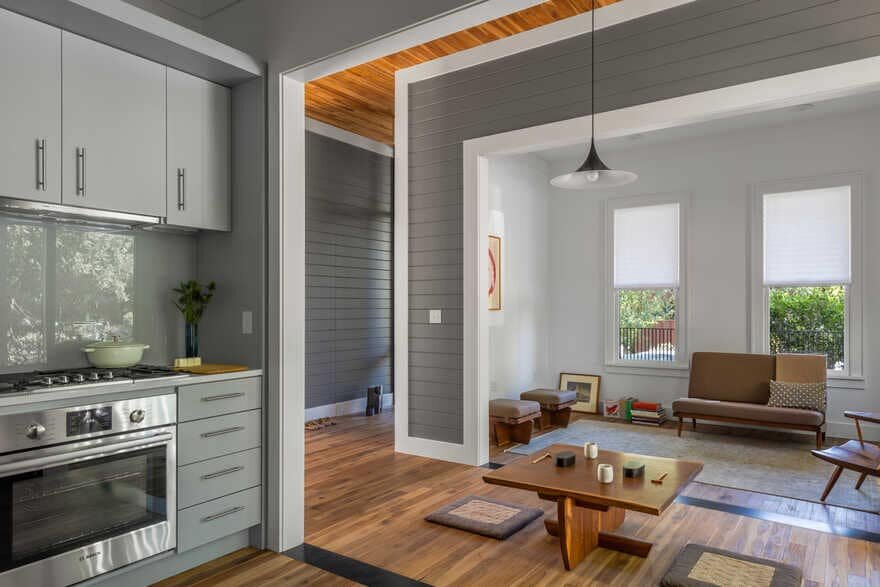 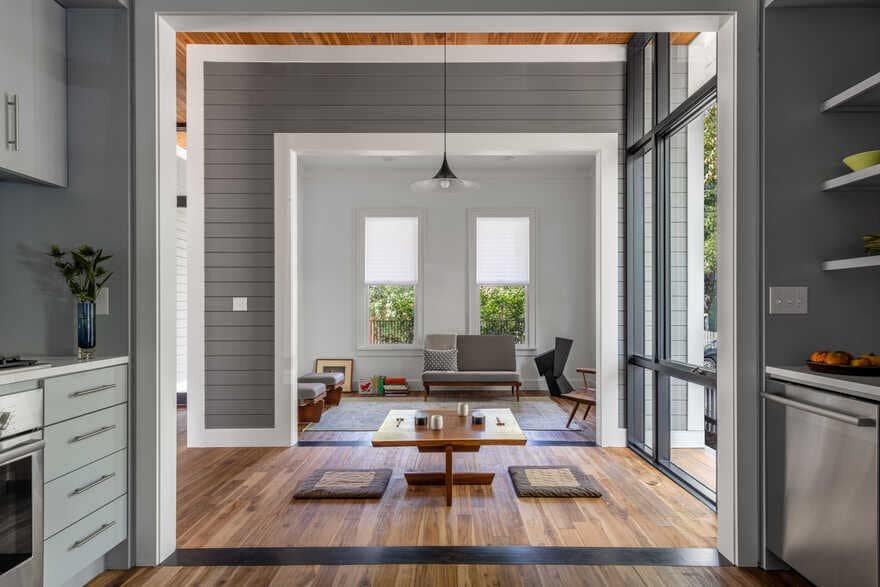 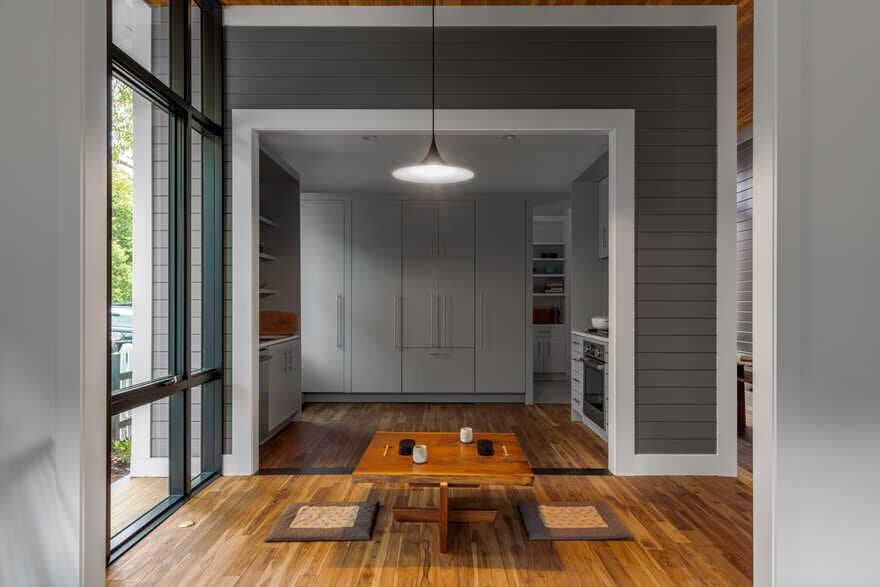 What were the key challenges?
Combination of modern and vernacular expressions. Making an intervention in an older structure, as opposed to a strict preservation.
One of the quirks of the existing structure is that it had extremely high ceilings for a house of its era: 11′-6″. We took advantage of this condition by using it to further distinguish ‘trot’ breezeways from ‘cabins’ with sectional variation. While the breezeways take full advantage of the height, in the cabins the ceiling is dropped to 9′-6″, further reinforcing the cozier feeling of shelter withing these spaces. Thresholds in the teak flooring, demarcated in black – the same as the threshold that separate inside from outside – add another sign of difference. The ceiling in the breezeway is also teak, where, in the cabins, they are drywall. 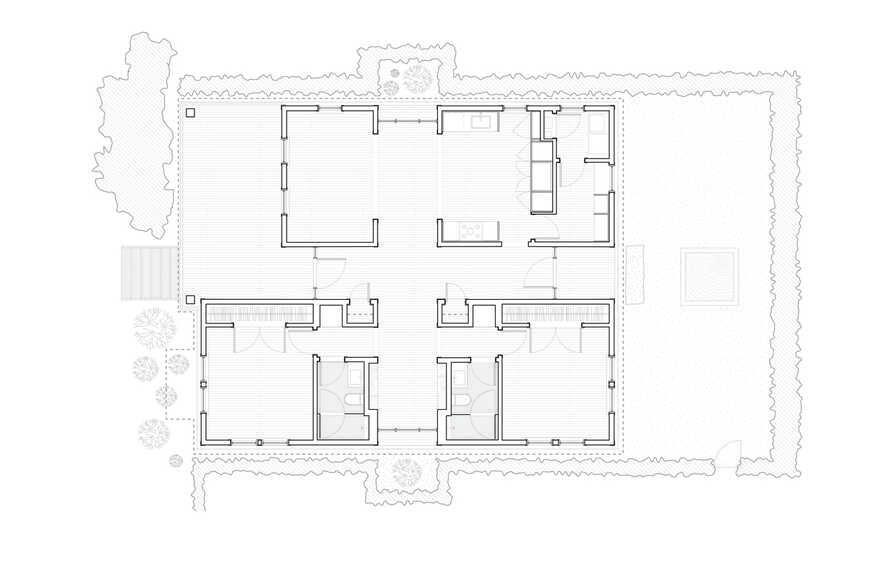 When designing a house on a tight budget, it’s important to concentrate on the essentials of the architectural idea so that intent and legibility are maintained in the final product. In other words, draw things that the builder will be able to do well. 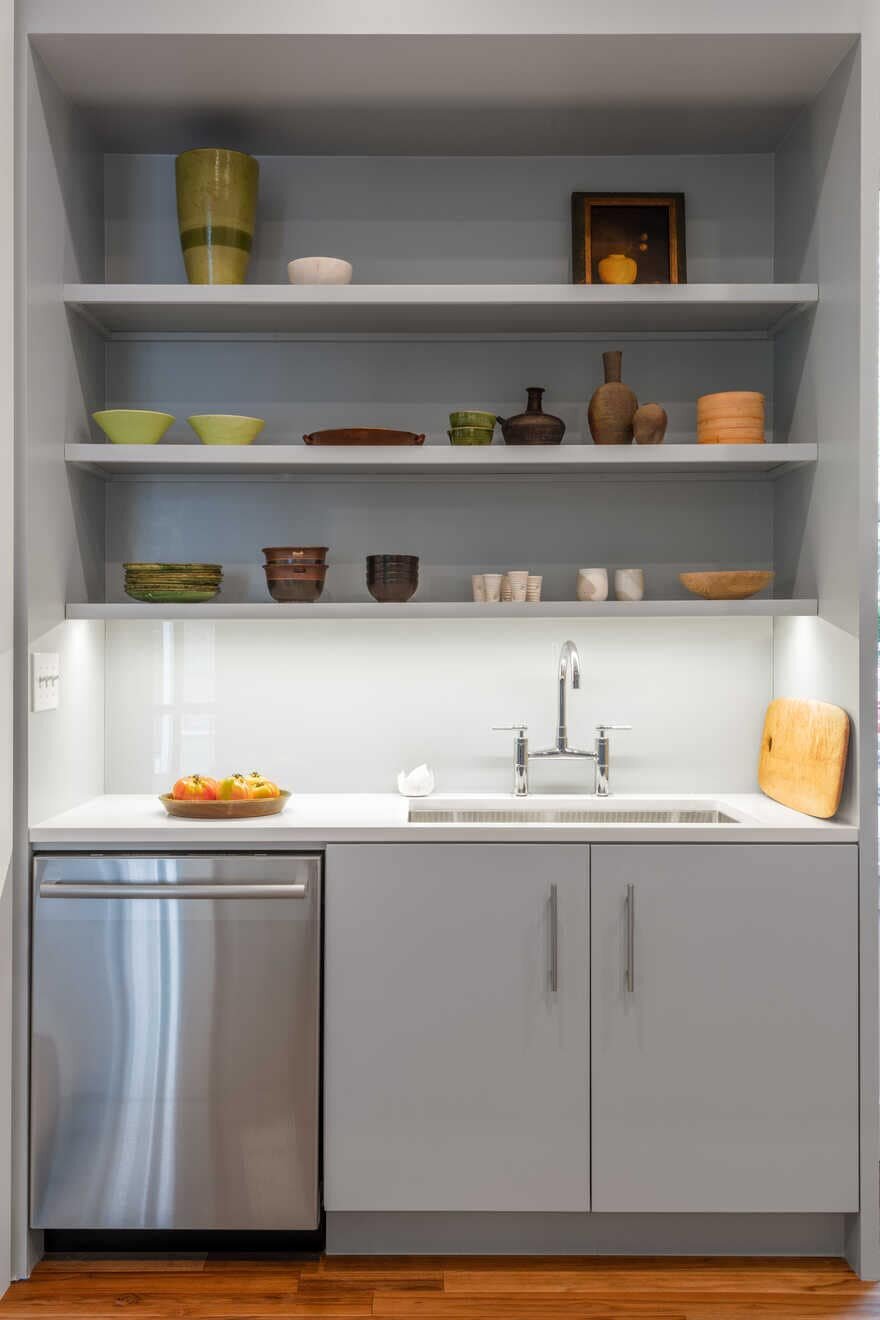 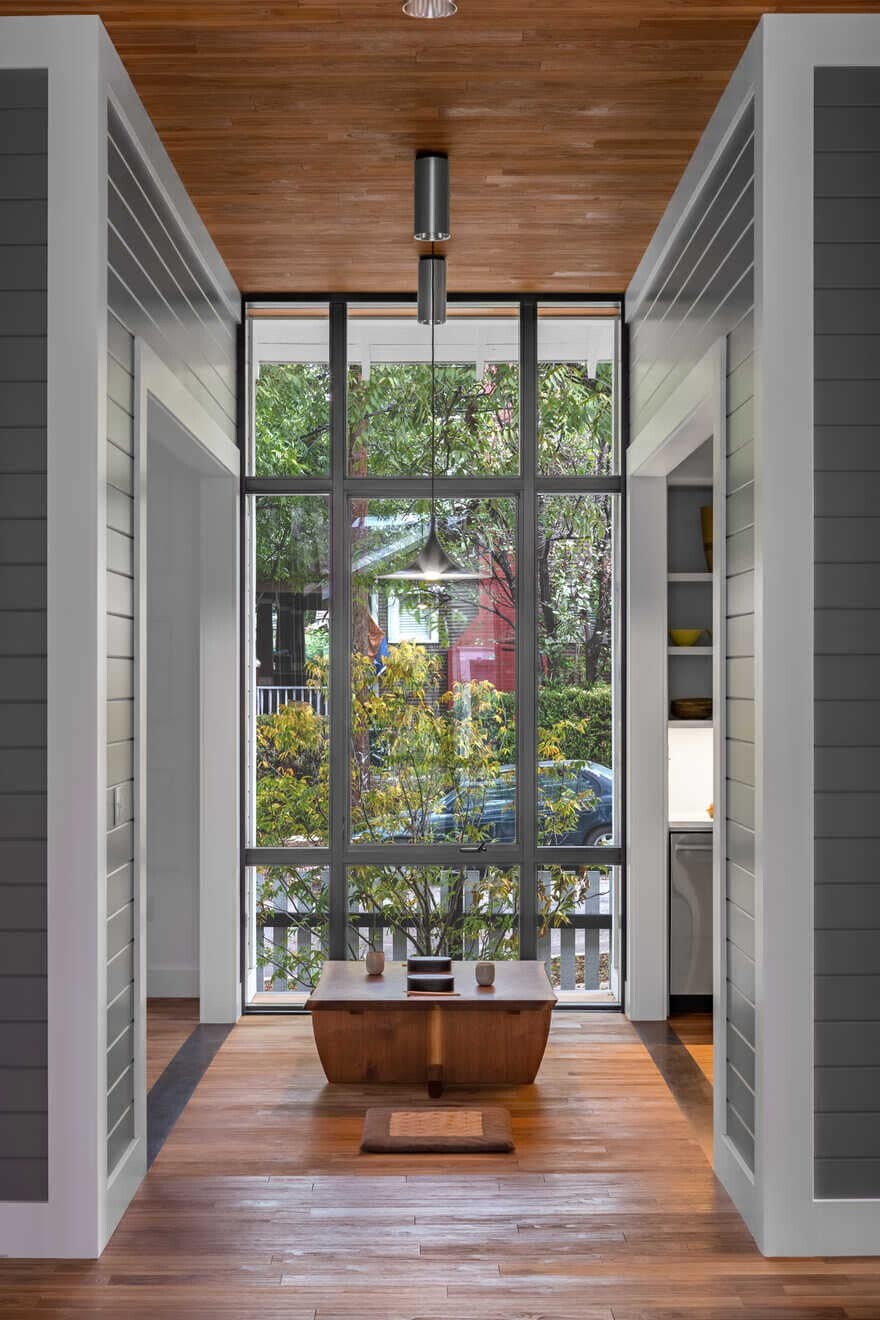 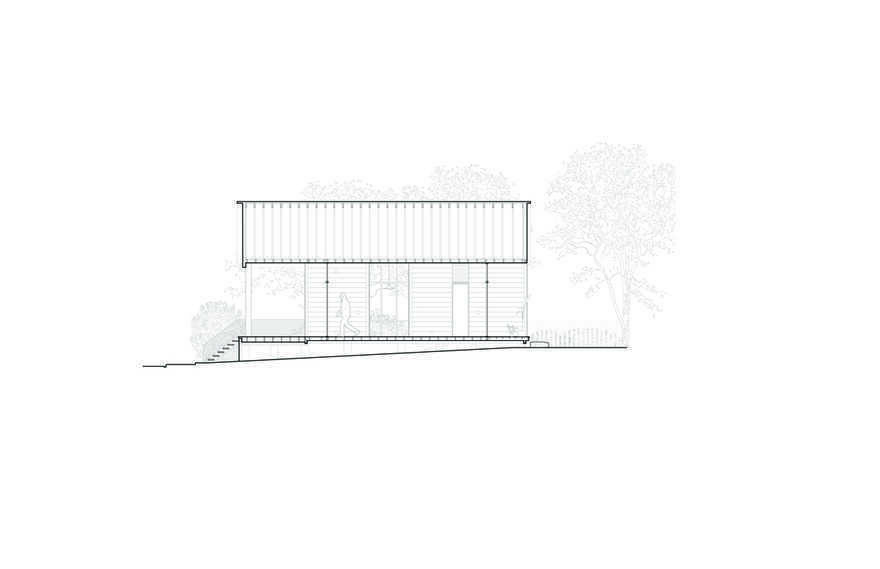 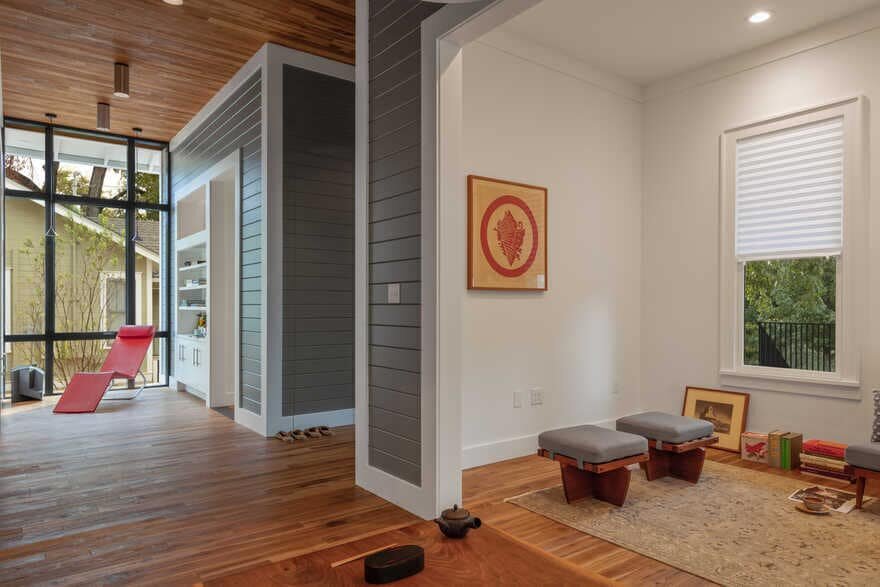 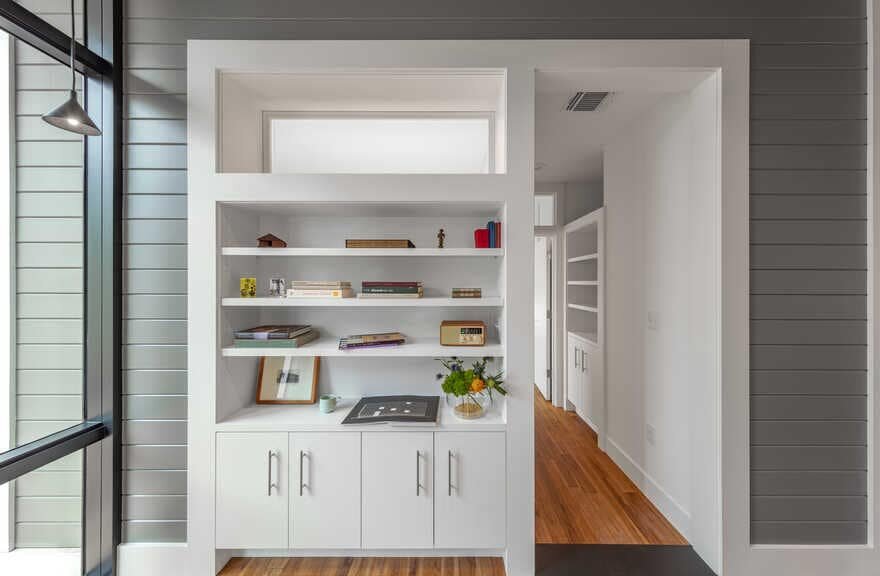 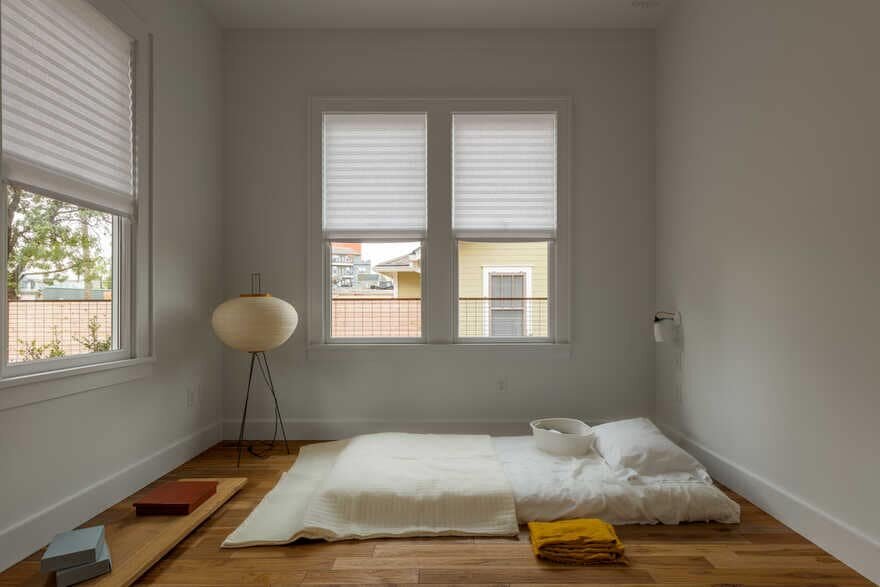 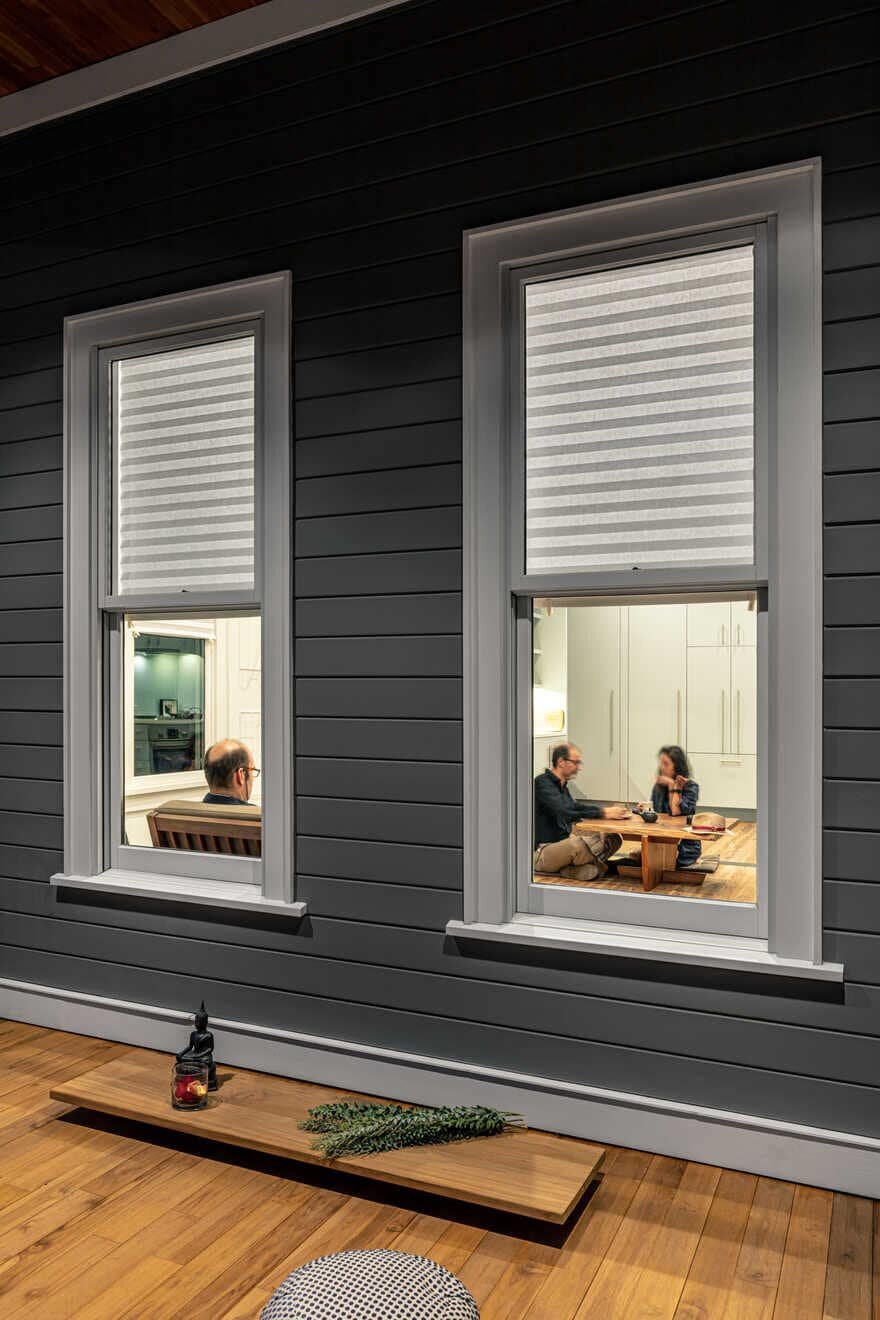 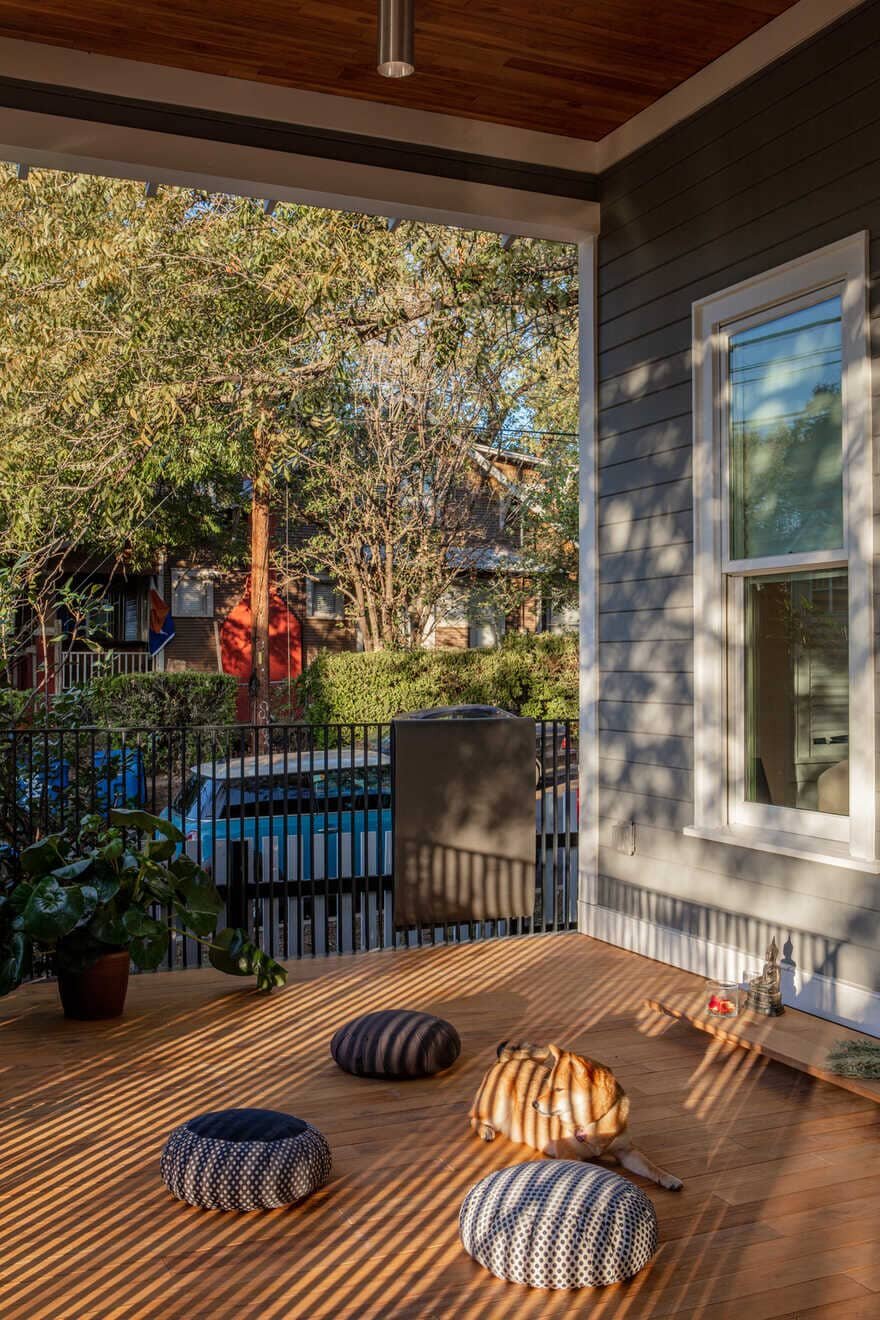 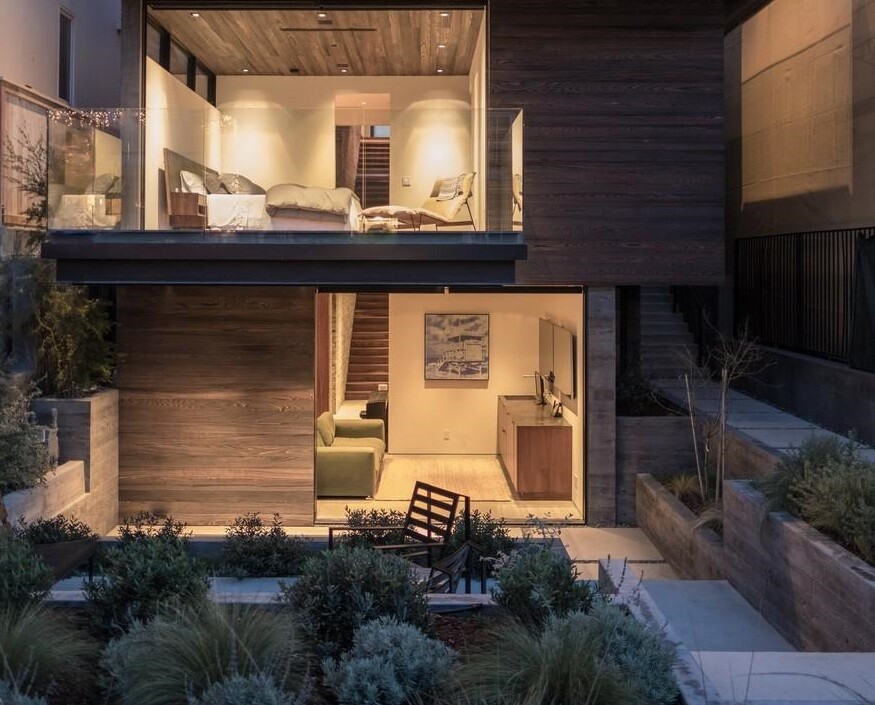 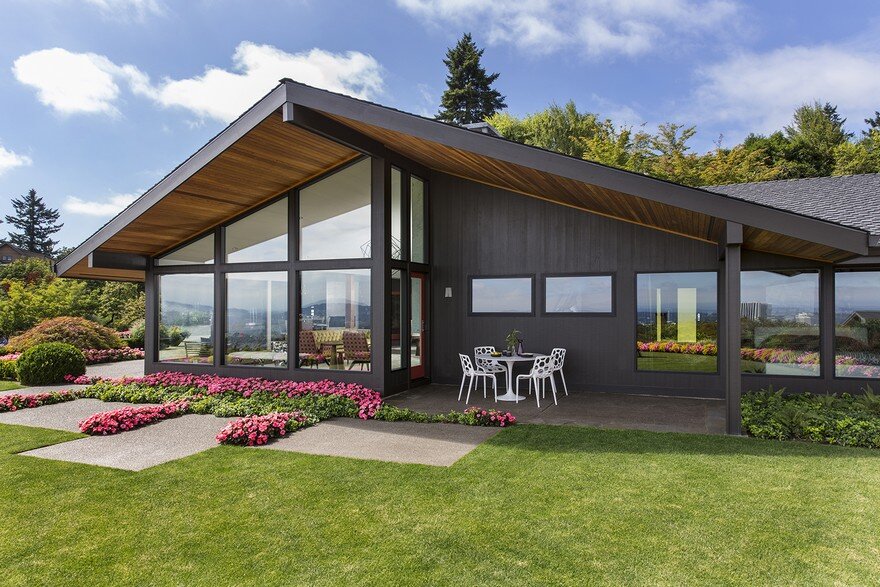 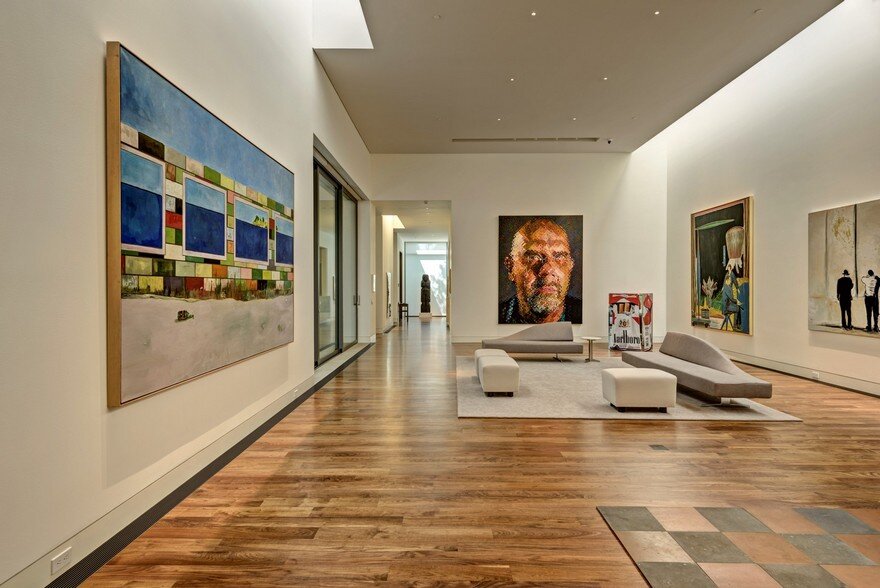 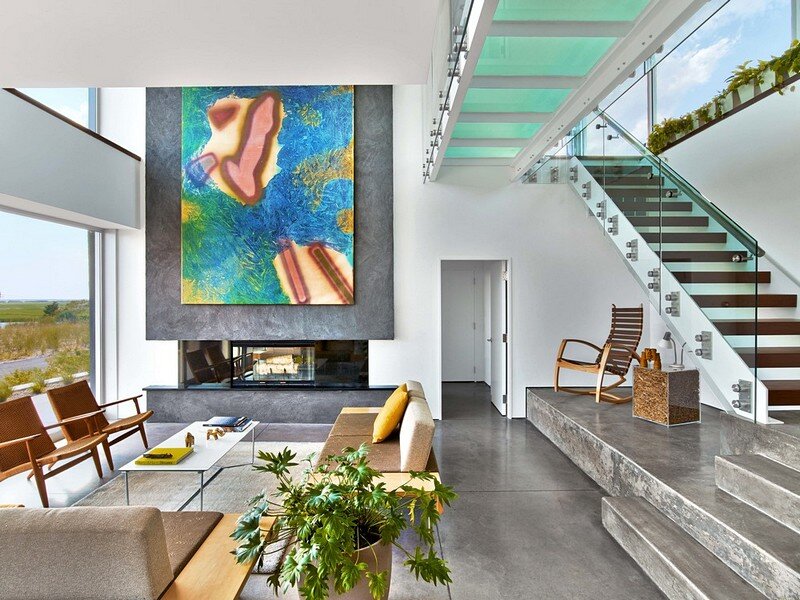