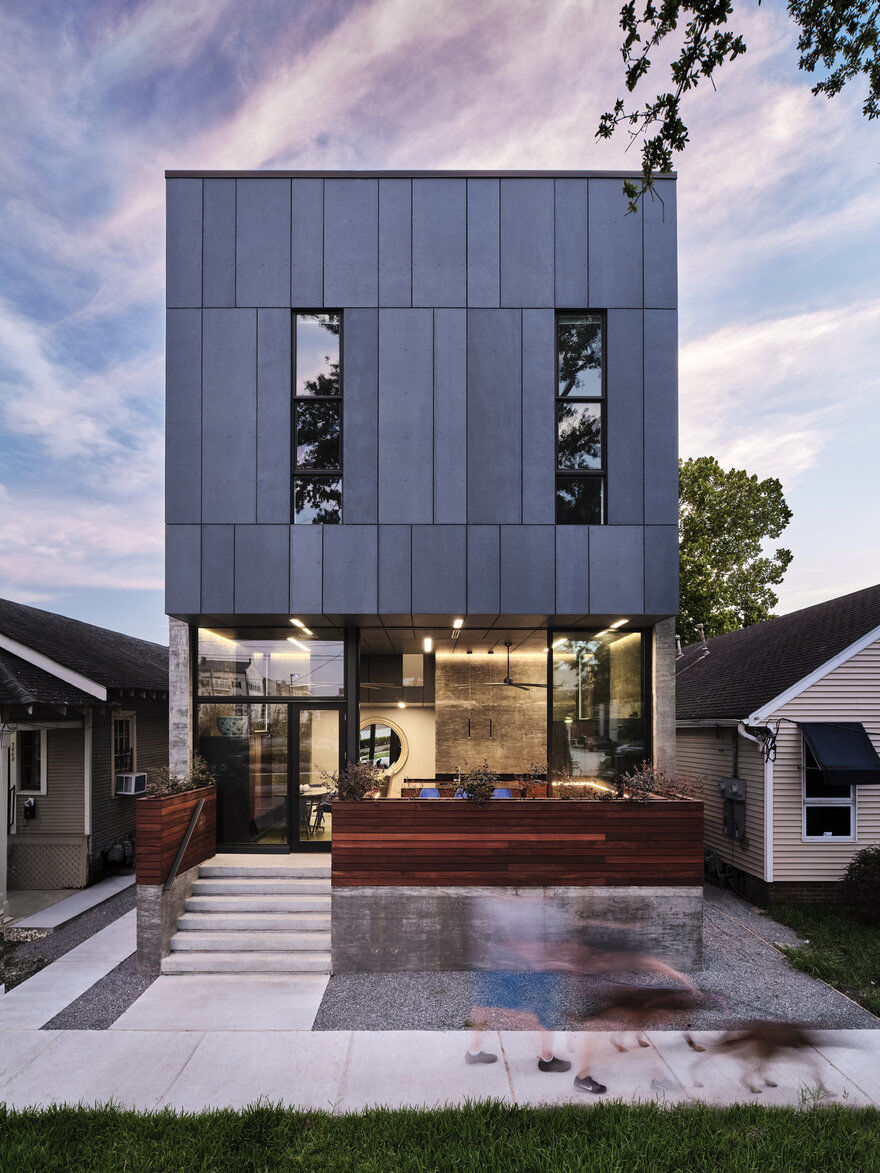 Logistics of a working family typically requires all (family members) to stay tethered to their homes for longer periods than each would prefer individually. This can become a phycological drag when all your time at school, work and home is spend indoors, as had been the case for a New Orleans Architect and his family. They reached a point where many families decide to move to the suburbs, exchanging great public parks and amenities for a back yard. Rather than moving far away, they decided to make a bold change by build a new house that flipped the script on indoor home life on a small urban lot. There was no way to afford the ongoing cost of a single-family home in the city, so a duplex with a rentable unit was baked into the concept early on. 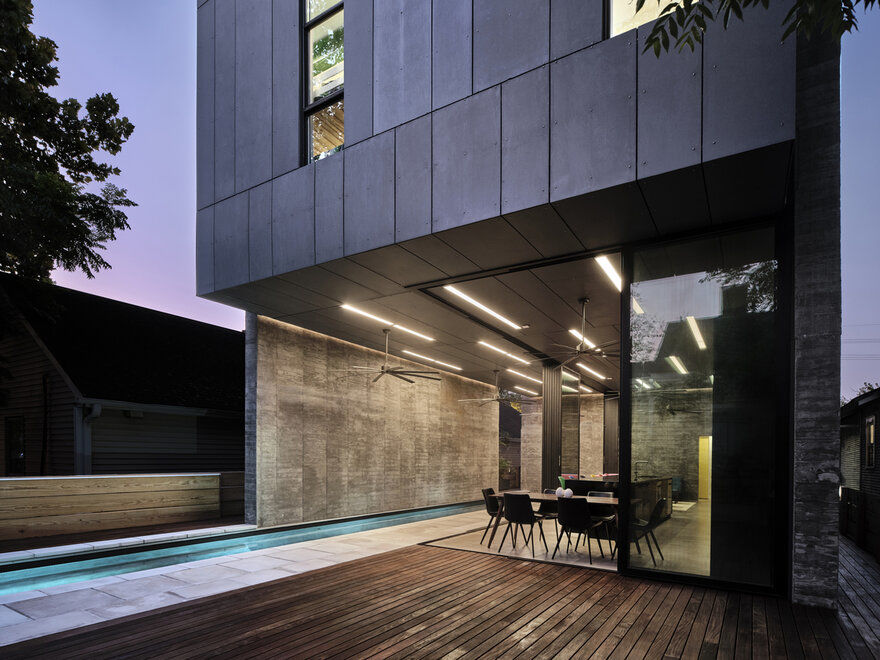 The duplex is designed to maximize use of the lot (32’x105’) with suitable space for separate, large families (or groups of people) in each unit. The central goal of the design was to configure communal spaces in a way that best accesses outdoor light, air and volume despite the density of required spaces. The rear unit (where the family resides) is 4 bedrooms with 3 ½ baths and the front unit (short-term rental) is 3 bedrooms 2 ½ baths. The layout orients the rental unit as its public face, actively engaging travelers with the city, while mirroring the position of the primary unit to connect with the rear yard for a greater amount of seclusion. 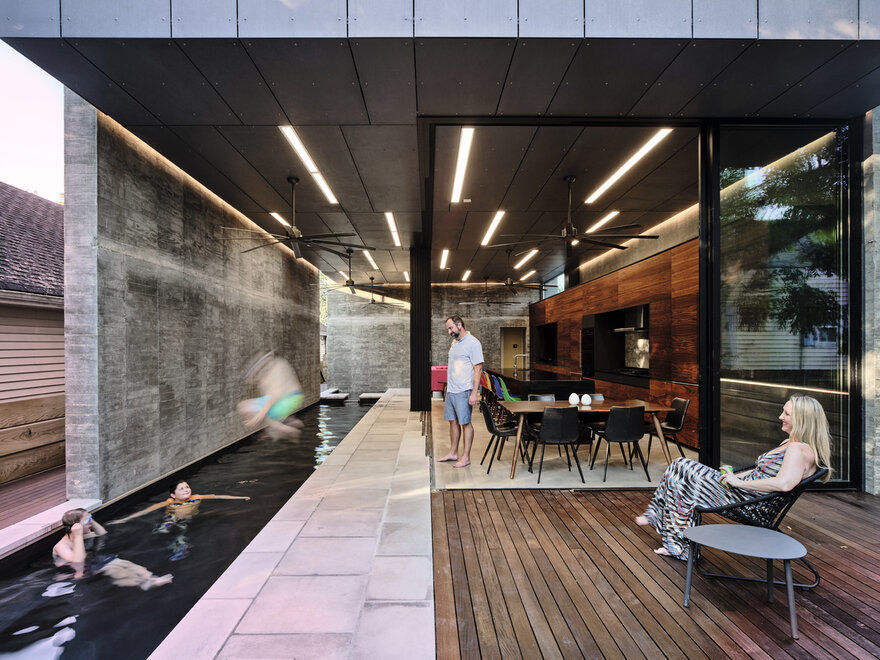 The 1st Floor spaces were designed to be voluminous with 12’ ceilings and stairs compressed as much as possible to maximize the sf area of the communal spaces. In the rear unit, an exterior deck continues from the interior communal space over the entire rear yard and extends under part of the upper floor volume along with a raised pool. Two sliding glass walls open to enlarge both interior and exterior spaces. In the front unit, a sliding glass wall is also provided to create a grand aperture to the exterior and leads to a deck flanking the front sidewalk. A raised planter wraps the front deck and is tall enough to provide inhabitants inside with privacy but short enough for engagement with people walking by and visibility of the 1st floor interior. 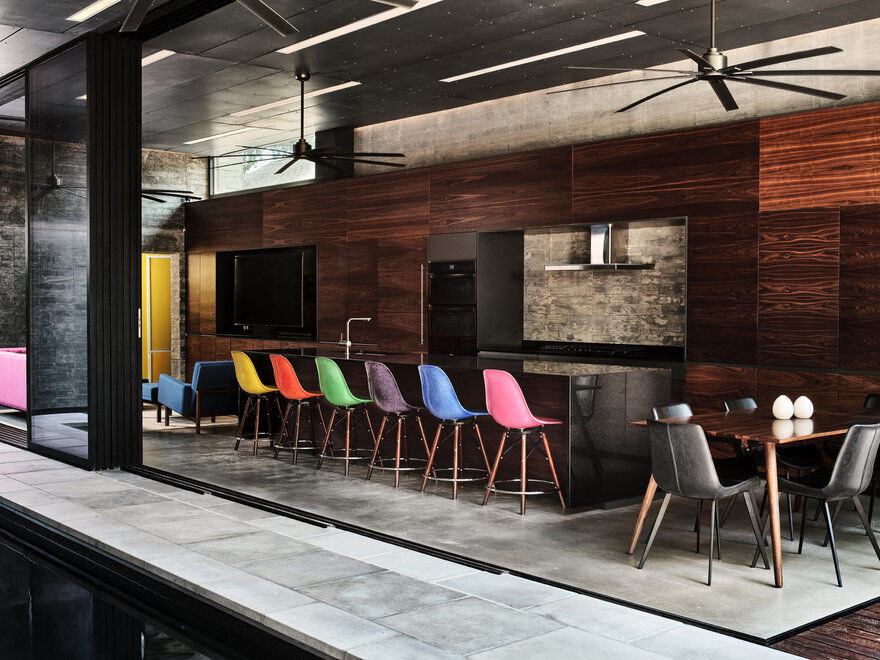 Architectural forms of Bienville House are configured to accentuate the transparency between the interior spaces of the 1st floor and the exterior. The upper floors contain more private spaces (such as bedrooms) and are wrapped by exterior surfaces forming an echelon of suspended cubic forms legible from multiple viewpoints including the underside. The exterior cladding wraps horizontally as the 1st floor ceiling material as an artifice to convey the space below as “outside.” The walls supporting the cubic forms are a series of monolithic, exposed concrete walls with a narrow gap between the walls and the cubic form to render each (the wall and cubes) distinctly. The static forms juxtapose the more animated interior space as a frame, reinforcing the transparency. 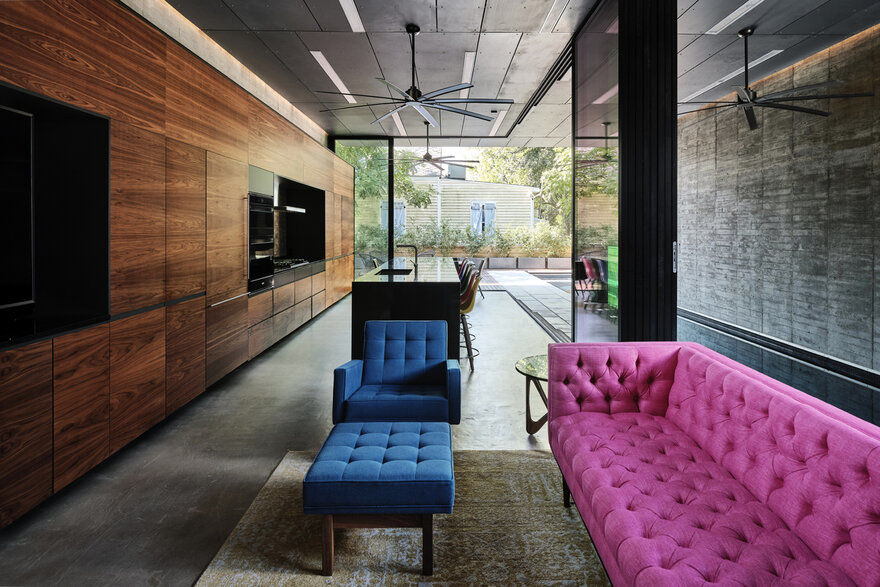 Finishes on the 1st Floor are raw, and exposed, serving as a backdrop to render activity and furnishing more vividly. The upper floor exterior walls and 1st floor ceilings are clad with large scale fiber cement panels, with a gap at the perimeter used as a continuous light cove casting down against exposed, board-formed concrete walls. Kitchen cabinets are clear stained walnut with handles routed into horizontal edges. The counter tops are black granite, with a waterfall edges cut short of the concrete floor to simplify the reading of the form. Finishes on the upper floors are more static and colorful. A series of multi-colored accent walls are created to embolden the defined use of each of distinct space. Concrete walls are exposed where possible. 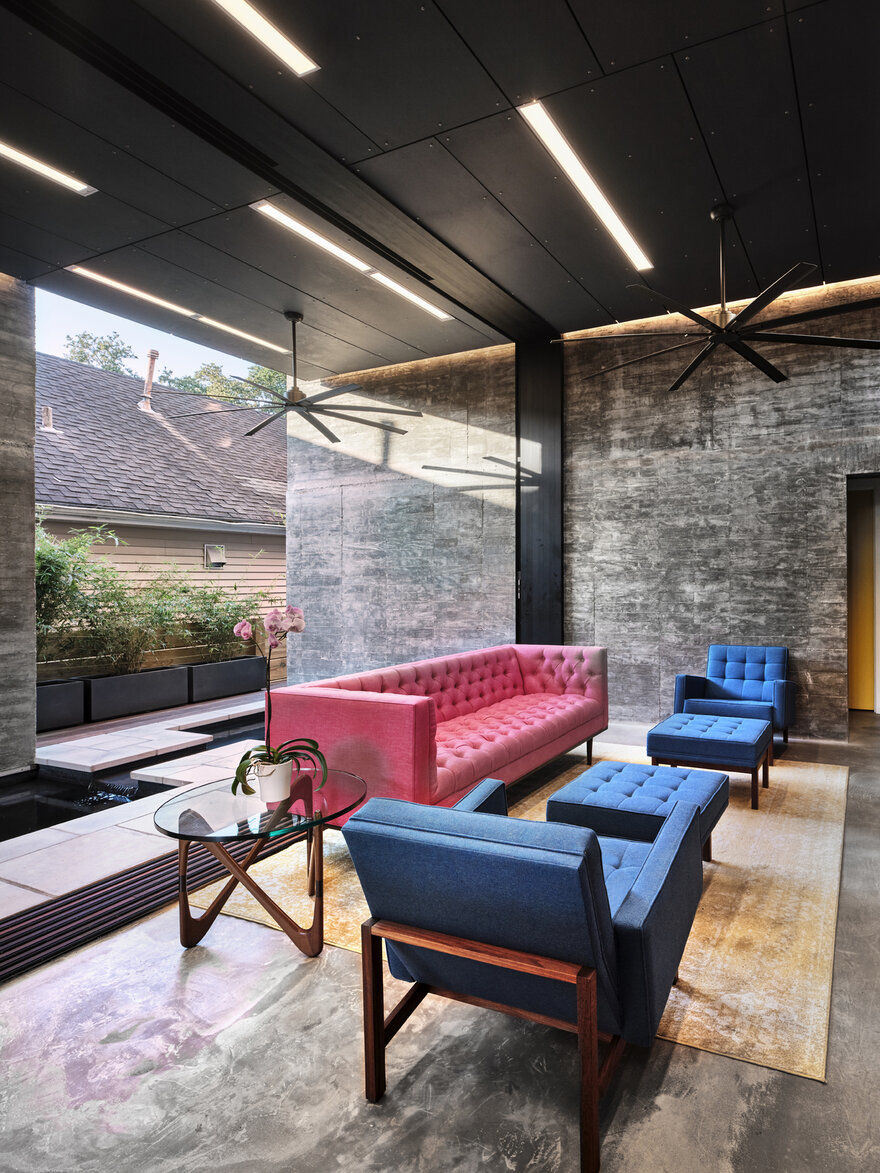 How is the Bienville House unique?
New Orleans is a city that is often proudly slow to change, and sometimes more romantic about it’s past than future. This can cast an air of inevitability (over new residential development within the city), that tawdry mimicry (more associated with suburban development) is the only possible path for a design. This house makes an effort to work within the historic paradigm in terms of scale, use and massing; while at the same time building with construction techniques and materials that make sense geographically (in terms of structural stability and sustainability) even if the may be unconventional (for this area). Since the Bienville House has be completed, we have heard nothing but positive feedback from neighbors and other New Orleans denizens who are often quick to vocalize their distaste. Historic buildings set a standard that people would like to maintain. The issue that is vocalized with work that is (aesthetically) contemporary isn’t a problem of style. They get it, even without a great number of comparable examples. 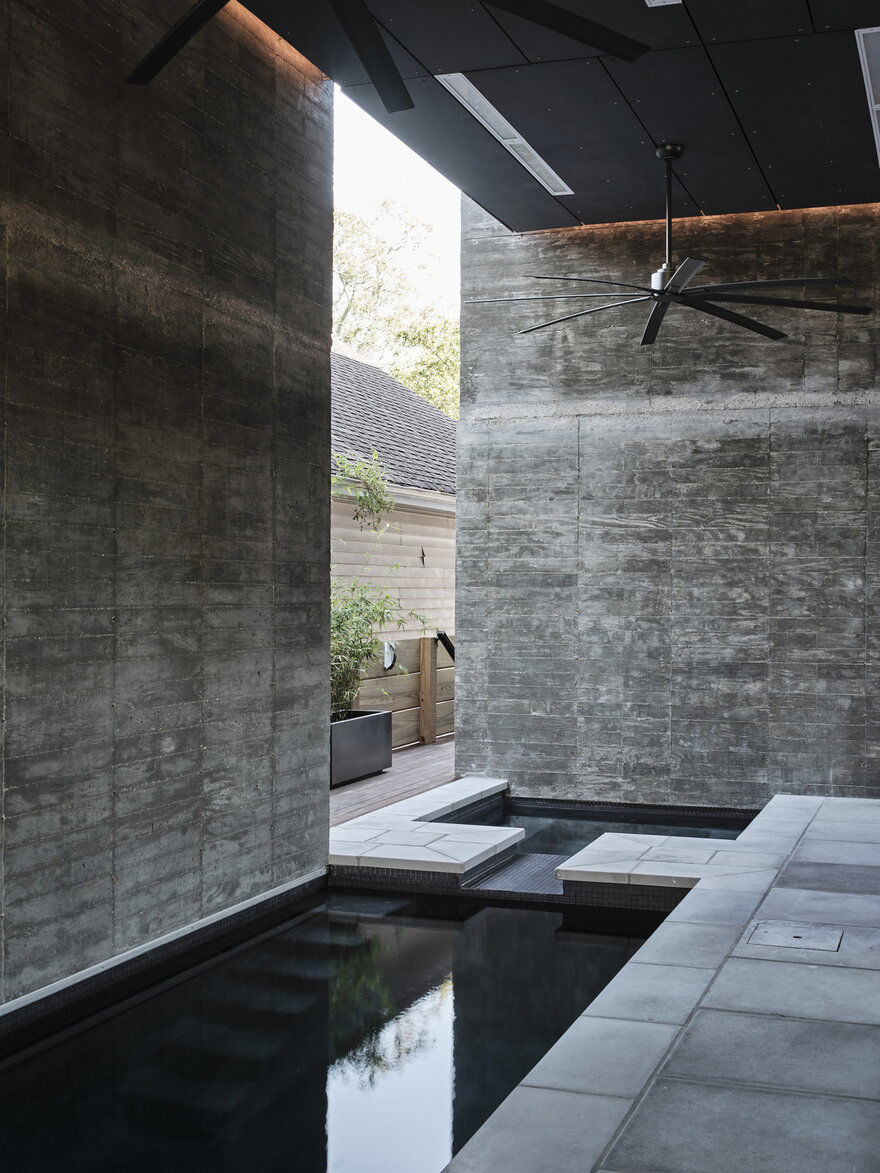 What are the sustainability features?
The ThermoMass concrete wall create an internal thermal mass that helps to stabilize the temperature. Insulation in located outboard of the thicker, load bearing portion of the wall providing the thermal mass (approximately 8″). The glazing on the 1st floor is set back (a minimum of 4′) from the building mass above to provide shade. 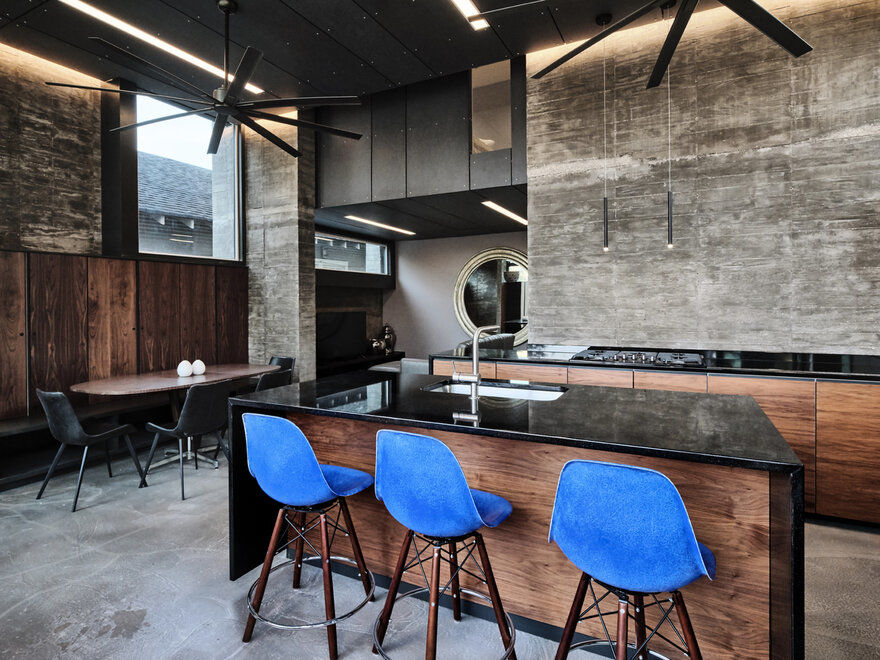 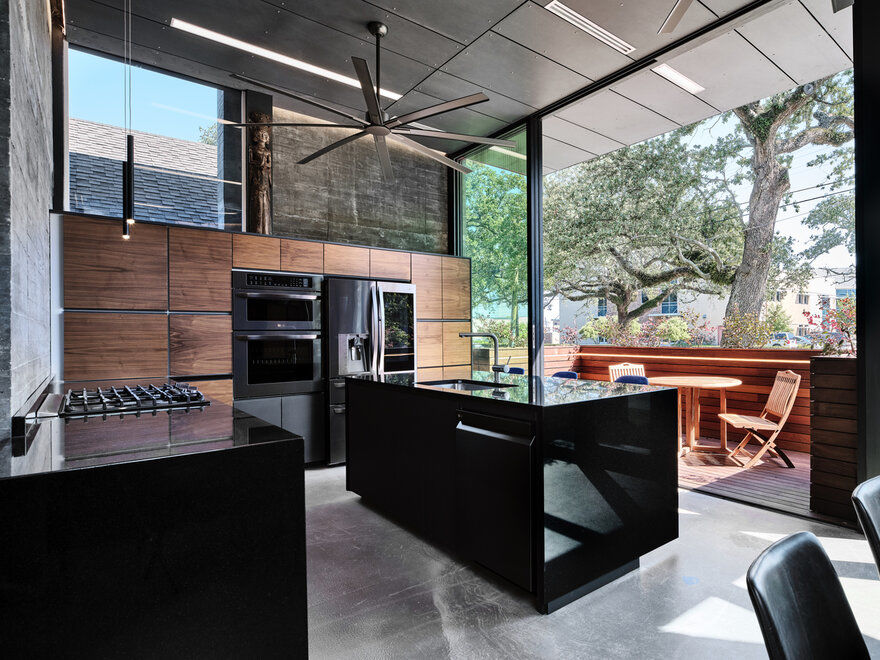 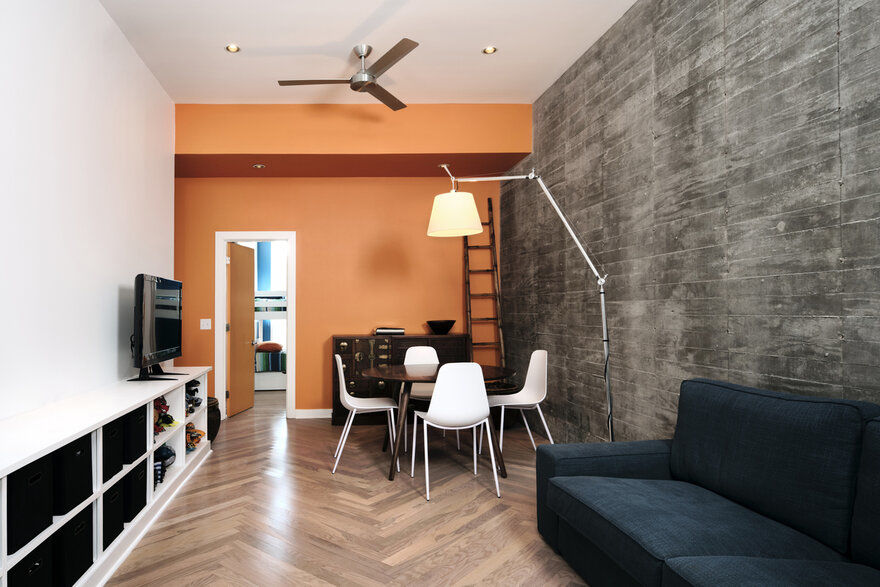 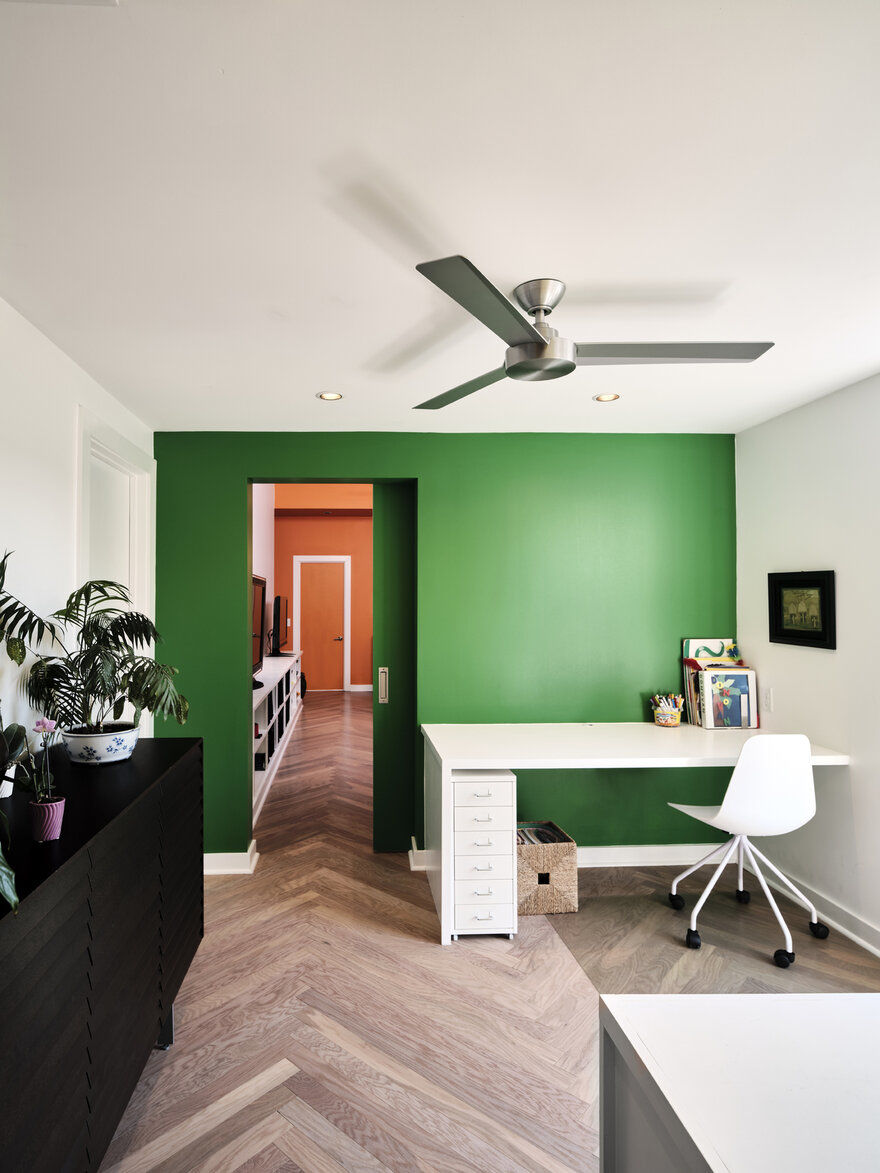 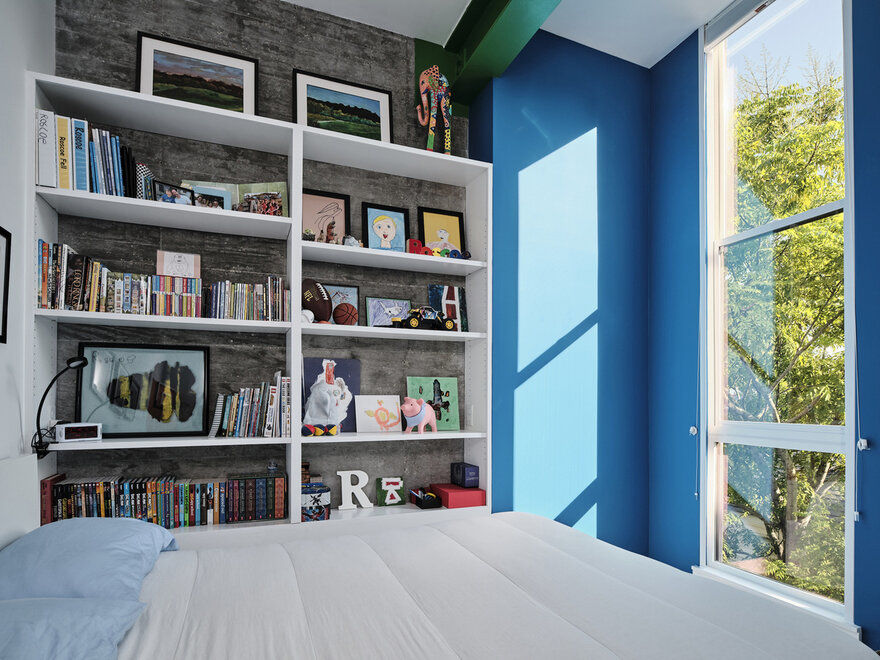 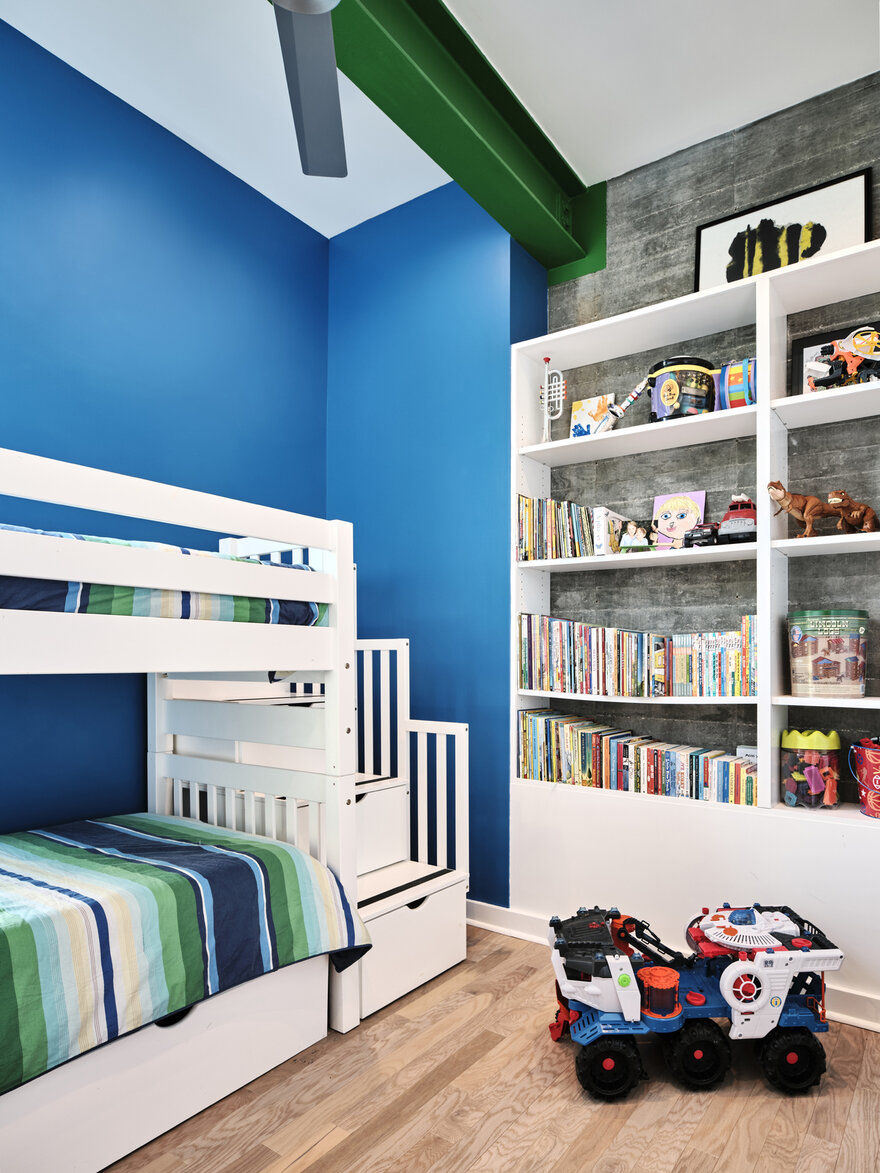 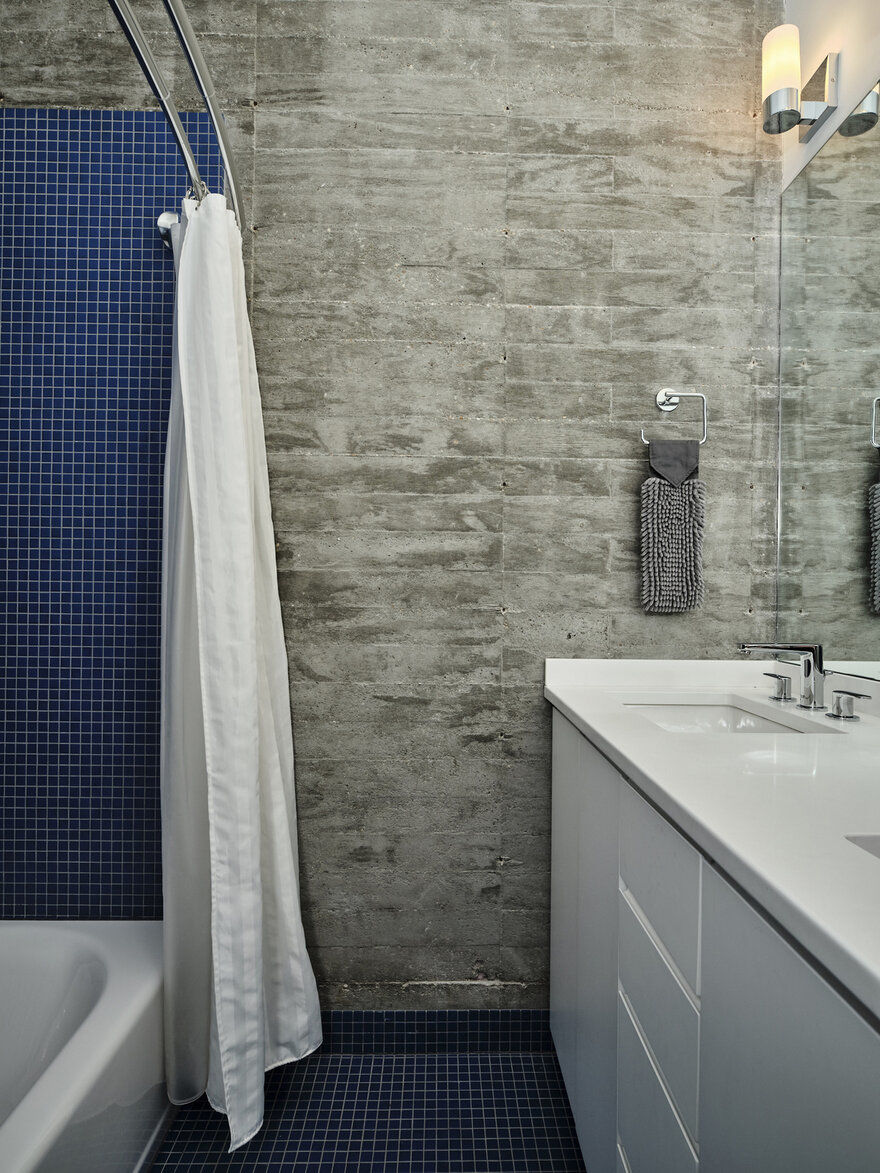 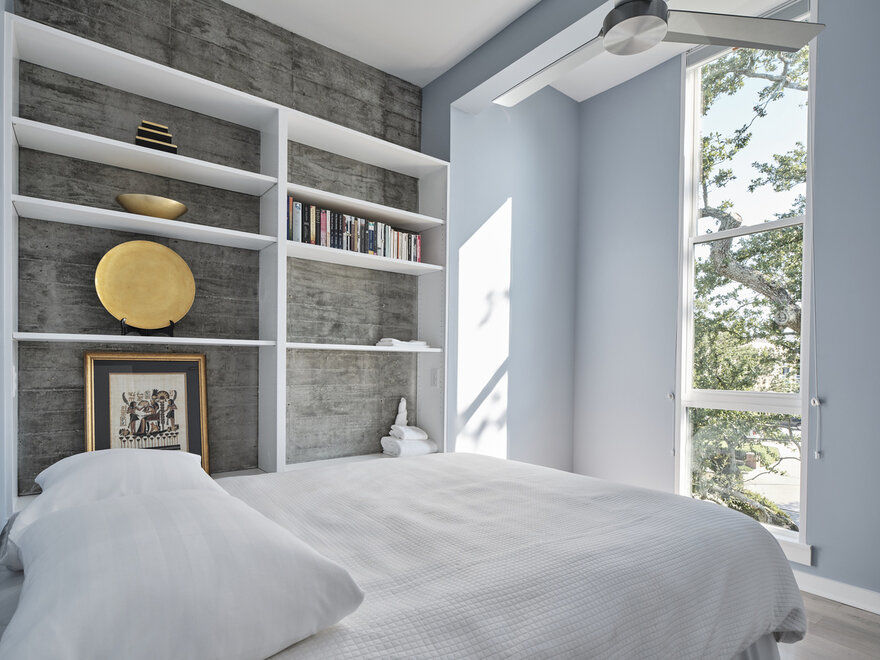 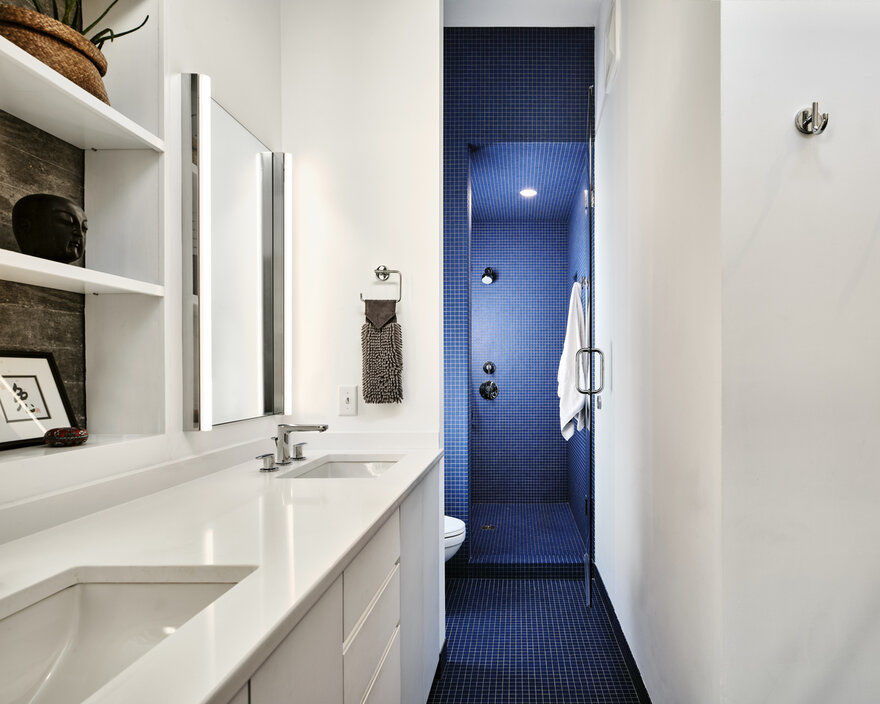 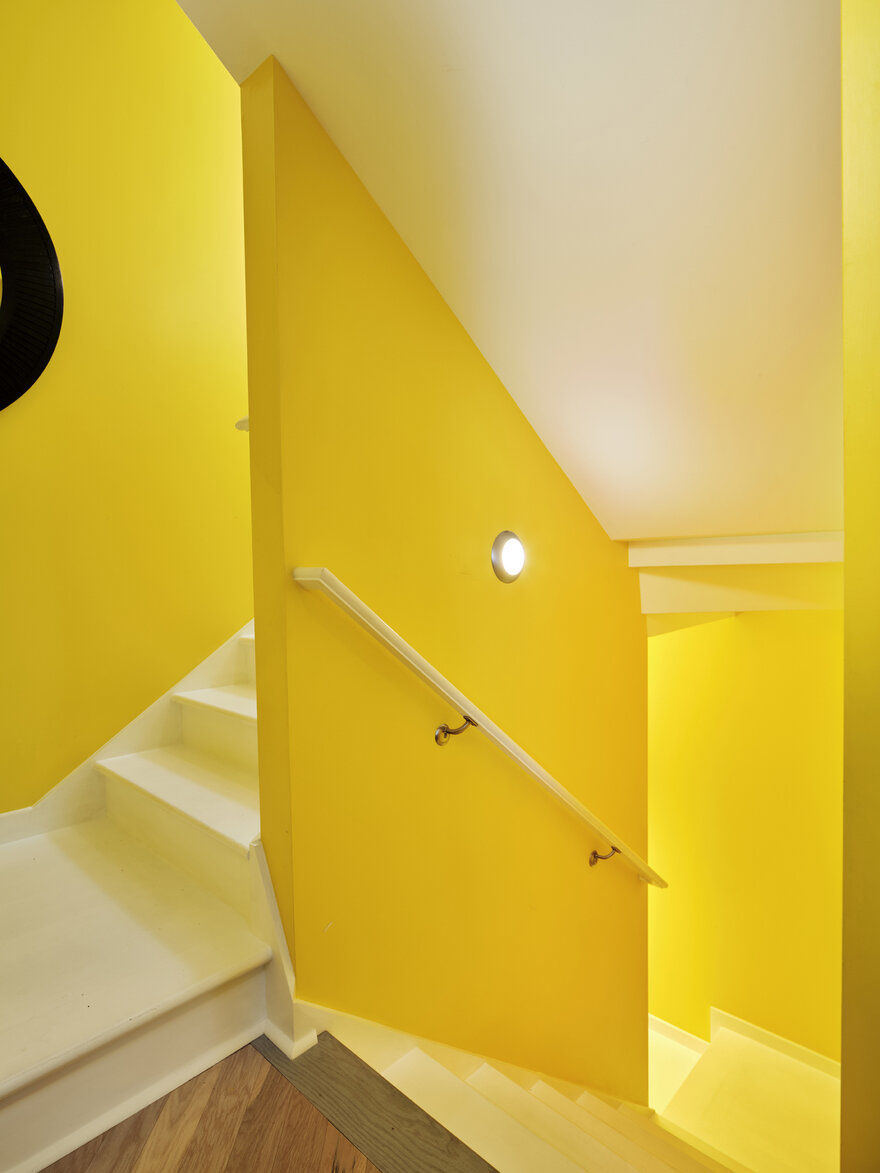 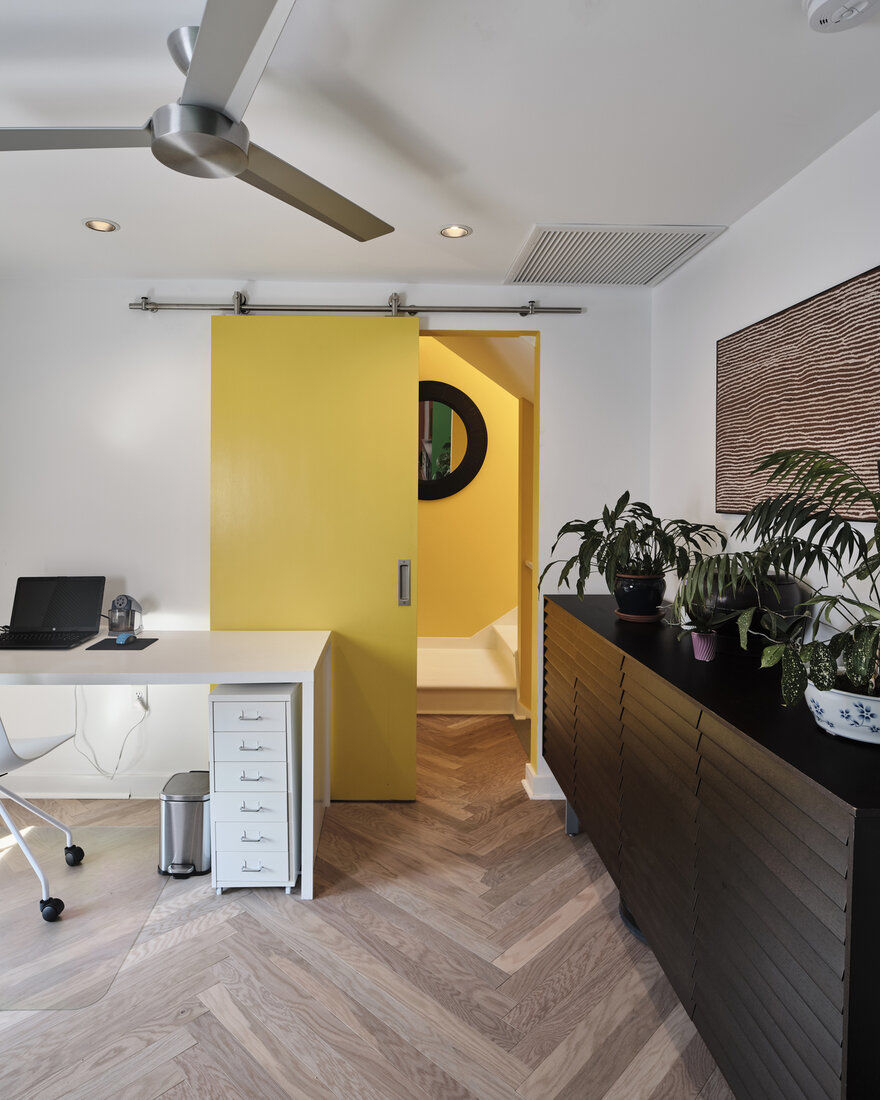 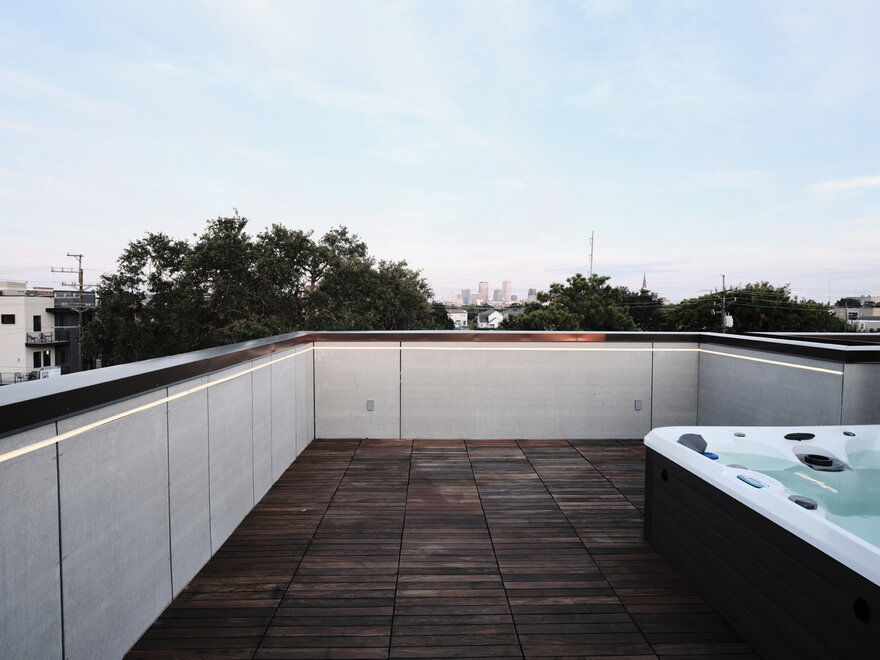 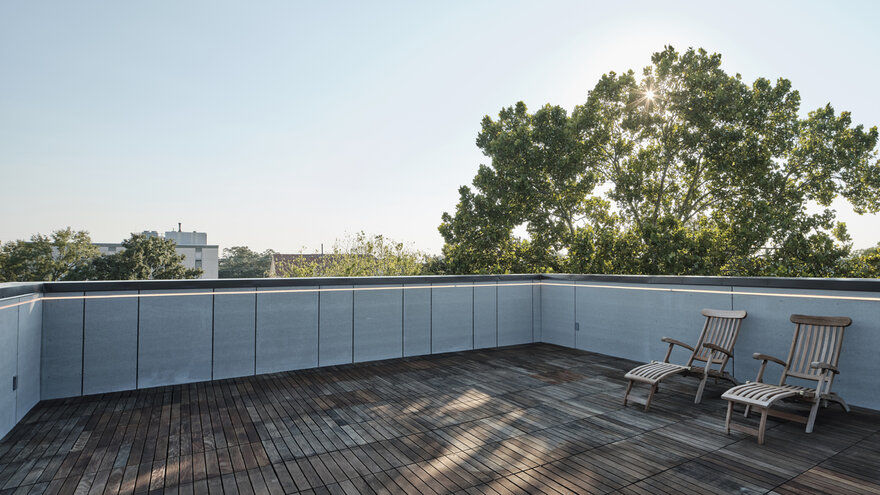 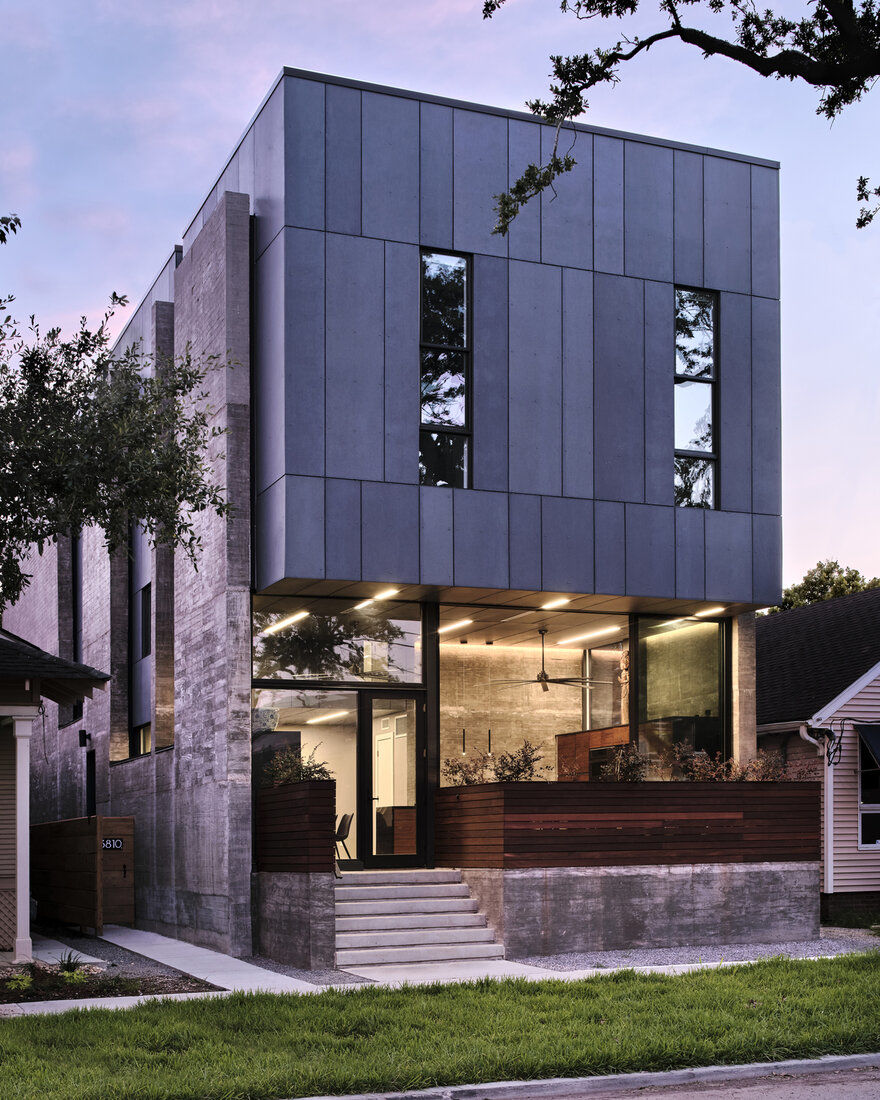