Following the years after the civil war, the economic perils did not allow the city to expand and yet Barcelona experienced a considerable increase of population. Barcelona’s industrial past allowed it to recover slightly quicker than the rural, more agriculture-based economies of the rest of the country, attracting many families that were in search of highly sought after employment.

To solve the high demand for residential space, new, less strict, urban planning regulations were set, allowing buildings to grow taller; many buildings that were once 4 o 5 stories high, became 2 or 3 stories higher. To avoid that the increased height of the buildings affected the amount of sunlight received by the buildings and the street itself, such surmounts partially retracted from the original facade plane, creating a stepped volume on the crown of buildings.

As these typologies were built well after the original construction, the building techniques allowed for less compartmentalized and unusual distributions. Such is the case of this dwelling, which has a 3 x 4 m space aligned to the building’s original façade, with two adjacent terraces on each side. Such space has always served as the bedroom because of its dimensions, and its position has left the dining and living rooms on a second plane, hiding behind a zigzagging façade- something very unusual in Barcelona.

The owner had two main concerns: to add a new bedroom, and to optimize the storage space- this dwelling had to allow the possibility of sharing the flat, hosting guests or accommodate a young family. This has been the first case in which Nook Architects has had to add a new, separate space to the original scheme. It was clear that this new space had to be the result of the fragmentation of the great living room, however it was important to maintain and strengthen the interior elevation of the living room’s facade, configured by three arches, to solve the living room’s unusual placement in regards to bedroom and to the building’s original façade.

The new bedroom was then created by constructing a wall that did not reach the facade and its configuration is finished by using a large pocket door that, when opened, allows to visualize the entire length of the arched façade.

To increase the amount of natural sunlight in the living room, and to create the sensation that the arch that leads into the bedroom, leads to the exterior, the main bedroom was closed down with large, translucent pocket doors, which have parallel, opaque shutters to obtain full intimacy, when desired. These double set of doors increase the possibilities of regulating natural lighting and privacy in both the bedroom and living room.

The owner was also very concerned with storage space, therefore a strip of cupboards was placed, wrapping the three openings just below the starting point of the arches, letting these breath and strengthening the transition between the interior and the exterior.

We had the opportunity of moving the entry door a few centimeters, which allowed us to accommodate a new row of storage space. Following the same criteria as in the cupboards we placed on the arches, we grouped the entry closets with the tall kitchen cabinets on a single strip forming a homogeneous elevation that maintains visual order on such a small space, without compromising the amount and versatility of the storage uses.

To set a limit between the open kitchen and the living room, we opted for changing the pavement from wood to an hexagonal hydraulic mosaic which is reminiscent of the ones we are used to finding in the buildings of Barcelona’s industrial, modernist era, such as the one that sits just below this apartment. This change of material therefore responds not only to functionality, but to the desire to recognize the city’s past and to reject the anonymous character of the attics that hide from view from the street. Description by Nook Architects 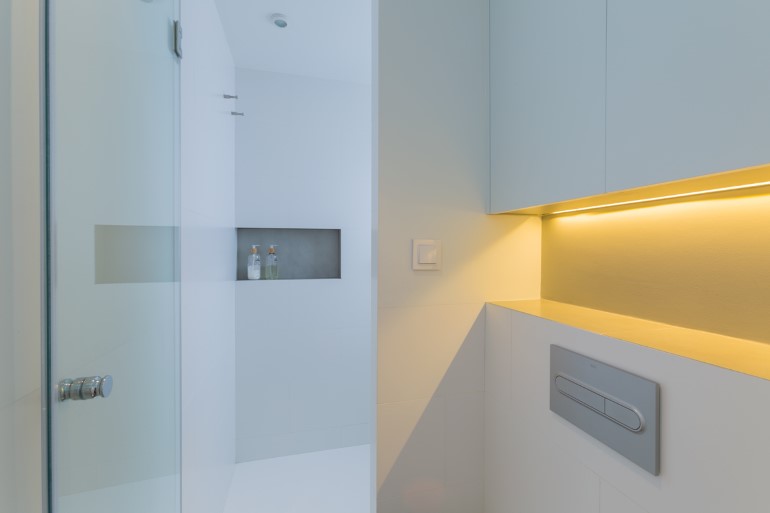 Batory Flat – Refurbishment of an Apartment from the 70s

Headboard Can Bring Art into the Bedroom

A Light-Filled Modern Family Home with an Eco-Friendly Interior

Refurbishment of a 35 sqm Vacation Apartment on Polish Seaside

Window placement is one of the most significant factors in improving natural light within a space. For instance, an apartment can have windows only on one side. Still, it can illuminate two different rooms if planned strategically.
Read more
Houses

Impressive Extension to a Three Bedroom Private Residence in Melbourne

Middle Park is home to some of the best preserved and aged architecture in the city of Melbourne, and this impressive extension to a three bedroom private residence builds upon this reputation. A material palette of stone, concrete and metal integrates an interplay of languages that will stand the test of time.
Read more
Pro Lighting

This modern Brazilian home is located in a rural area, 40km away from the city center of Brasília. The topography has a slight downward slope towards the back of the lot, where a valley with native vegetation dominates the view.
Read more

Cobalt Apartment in Cagliari by Mauro and Matteo Soddu

A Cocoon for Modern Urban Nomad in Amsterdam’s Canal District

Renovation and Light – Everything in 20 sqm