The Avenue London / The Vawdrey House 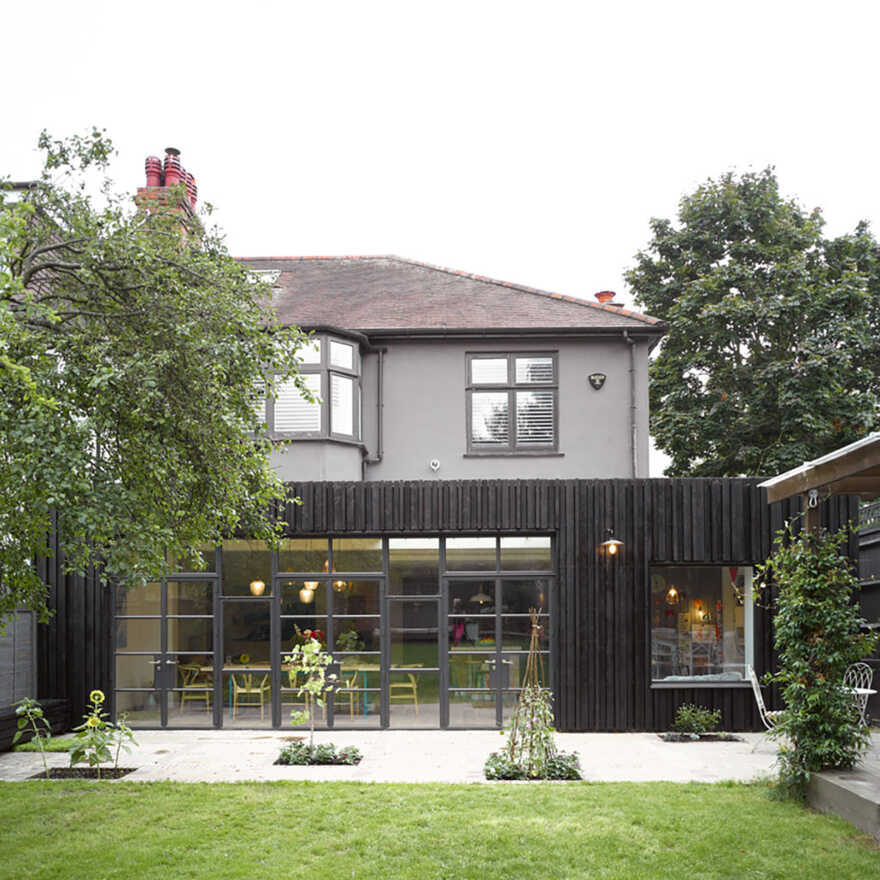 This light and spacious 1930’s Semi in Queens Park seduced our client and her three girls to move out of their tall Notting Hill terrace and try life with a proper garden, and without so many stairs.
The bones of the house were good, but it lacked the large open plan living space they craved, and while it had five bedrooms it still only had one bathroom.
Recommended by a previous client of ours The Vawdrey House were called in to create the look she wanted – a relaxed ‘beach house in the city’ flooded with light, and fun for the girls. 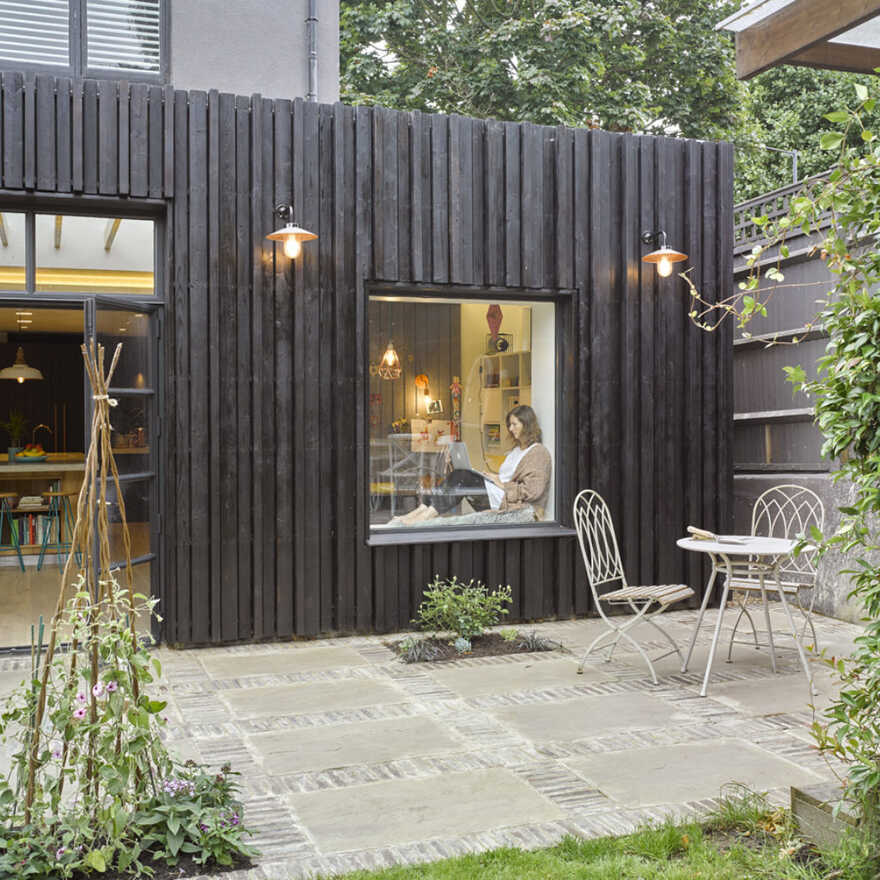 After looking at various ways of reconfiguring the ground floor we opted for a full width rear extension which would provide a large living, kitchen, dining space, incorporating a play area for the girls, all overlooking the 100 foot garden.
In the old part of the The Avenue London house, the central hall still features its original woodblock parquet flooring and fireplace and a sharp painted line now runs like a dado round the room, across the doors and up the stairs.
Using the under-stairs space we formed a dramatic cloakroom and wc, all clad with tongue & groove panels and painted deep sea green, with encaustic tiles on the floor. 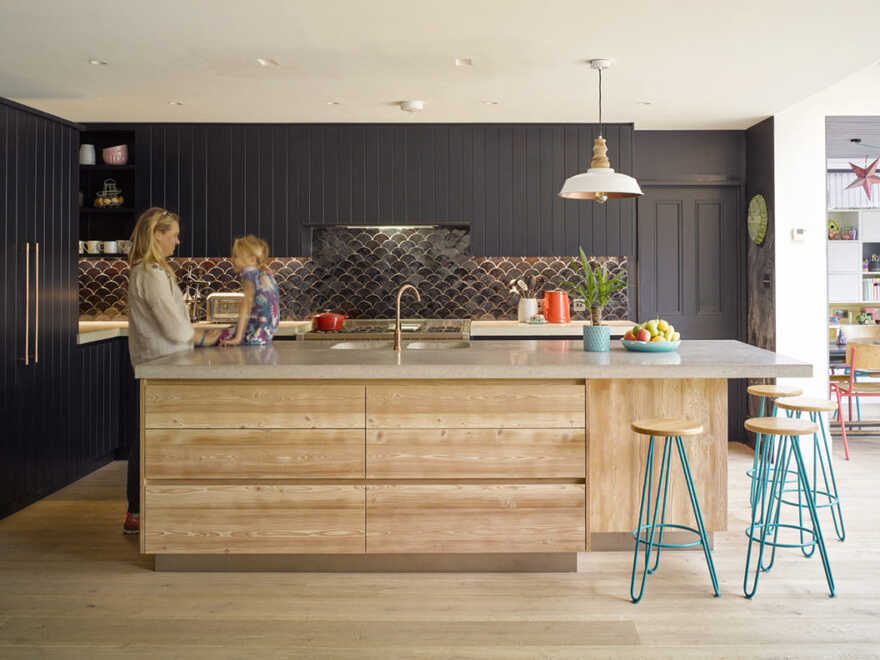 The principal front room with the bay window remains as a formal living room, used now for music practice, with black limestone floor and a large fireplace. A new glazed door makes it feel more connected to the rest of the The Avenue London house. 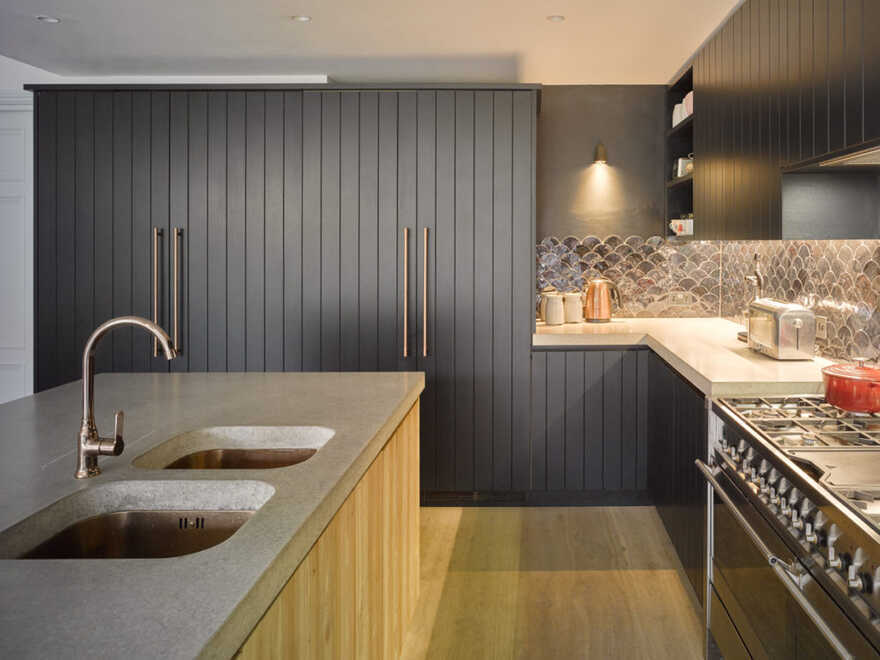 New double panelled doors lead through from the central hall into the living space and new rear extension beyond, offering views of the garden right from the front door. This very large space is broken up by various different ceiling treatments, which define the spaces, while rough sawn oak flooring unites it throughout. 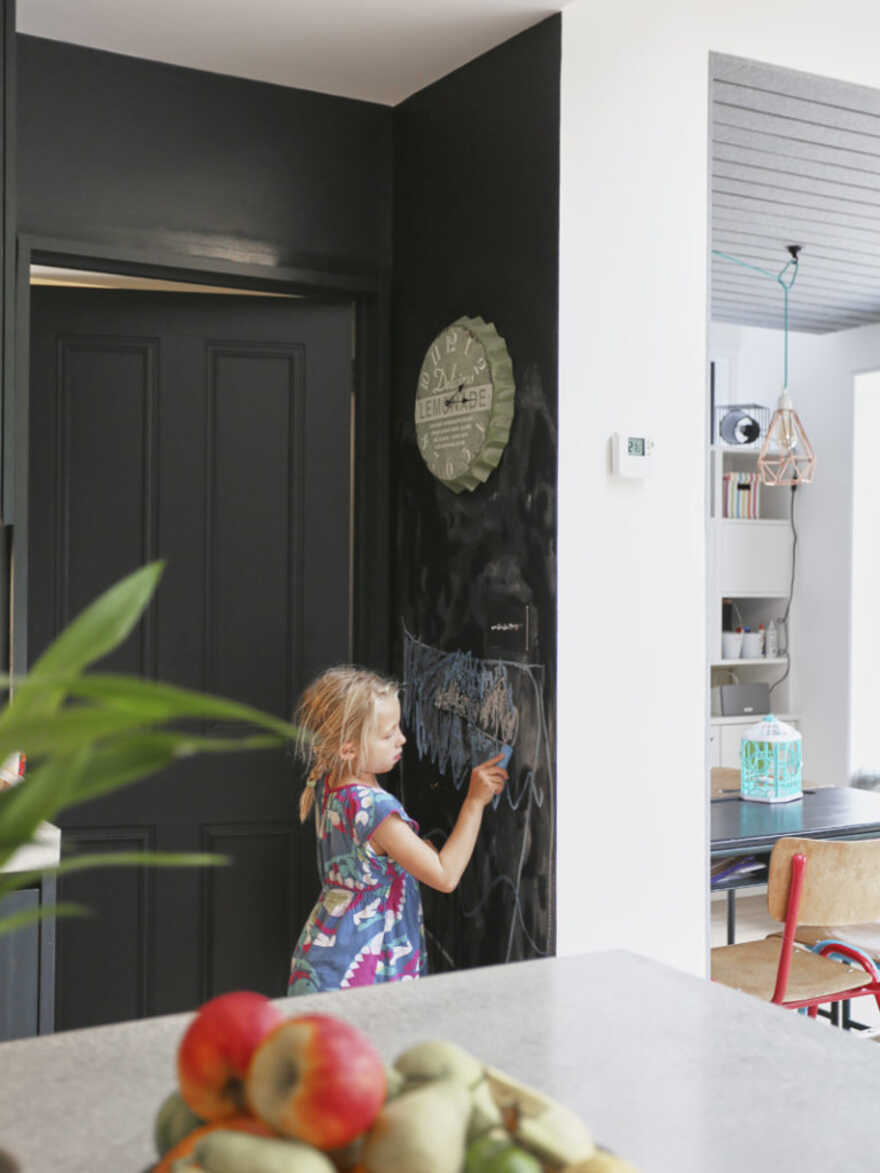 In the living area, the old brick wall of the original chimney-breast has been exposed and painted, and the end wall of the extension formed in painted brick to match.
The original cornice has been retained to this space too. A log burner makes sure the room feels cosy on winter evenings, and a full wall of shelving with tiny pots of succulents & tumbling ferns adds life.
The extension mainly forms the dining area, with exposed timber ceiling joists which have light filtering between them from a rooflight above. 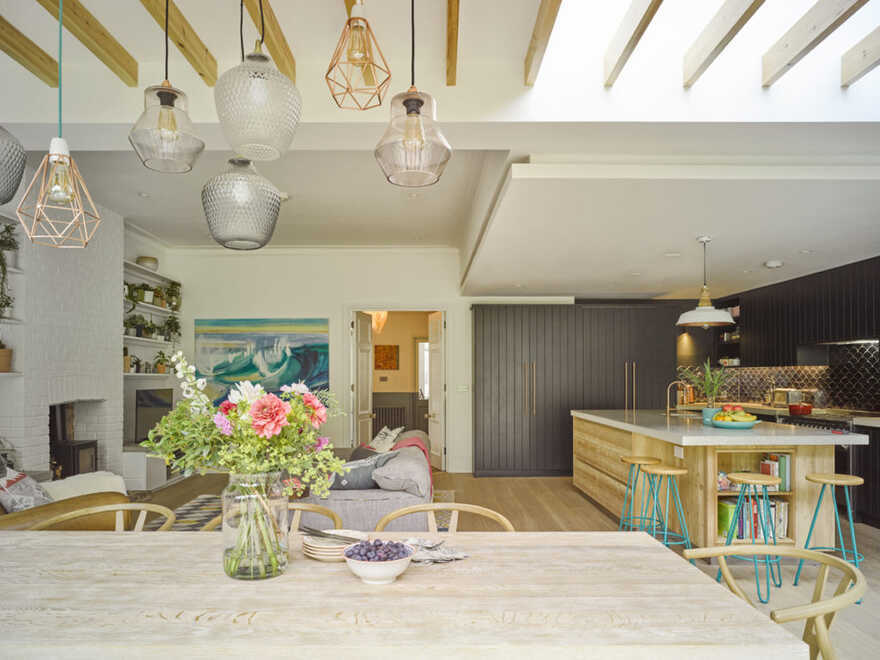 The table was made bespoke and features teal blue legs and a sandblasted oak top. The large industrial framed doors bring light through to the whole space and the fenestrations were designed to echo the style of sash windows in the local area. 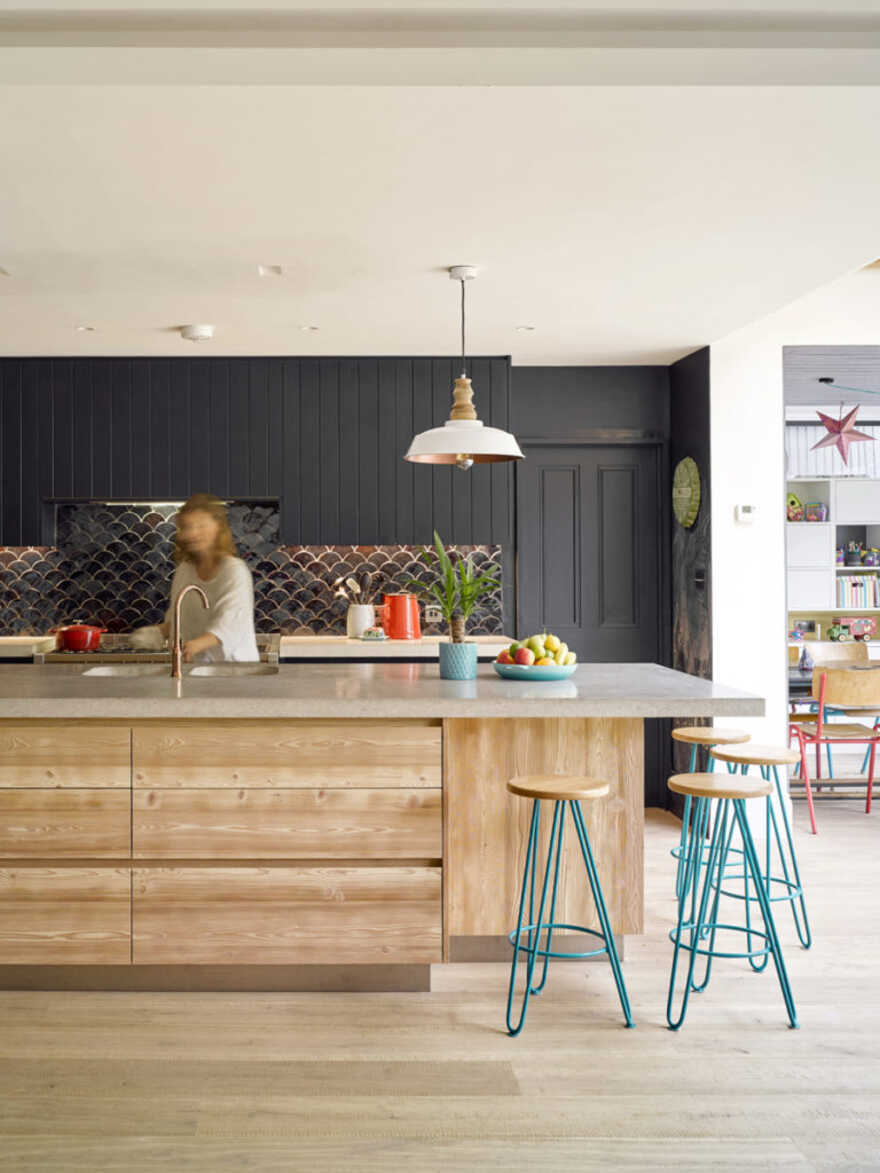 The kitchen area has a dropped ceiling, which separates it from the living space and also features a concealed light to its perimeter.
The bespoke kitchen units have blue-black painted tongue & groove doors and larch ply interiors, with shimmering black fishscale tiles as a splashback.
The large island features textured sandblasted larch drawers with a thick concrete top. Copper handles and a copper sink and tap shine like jewels against the dark backdrop. 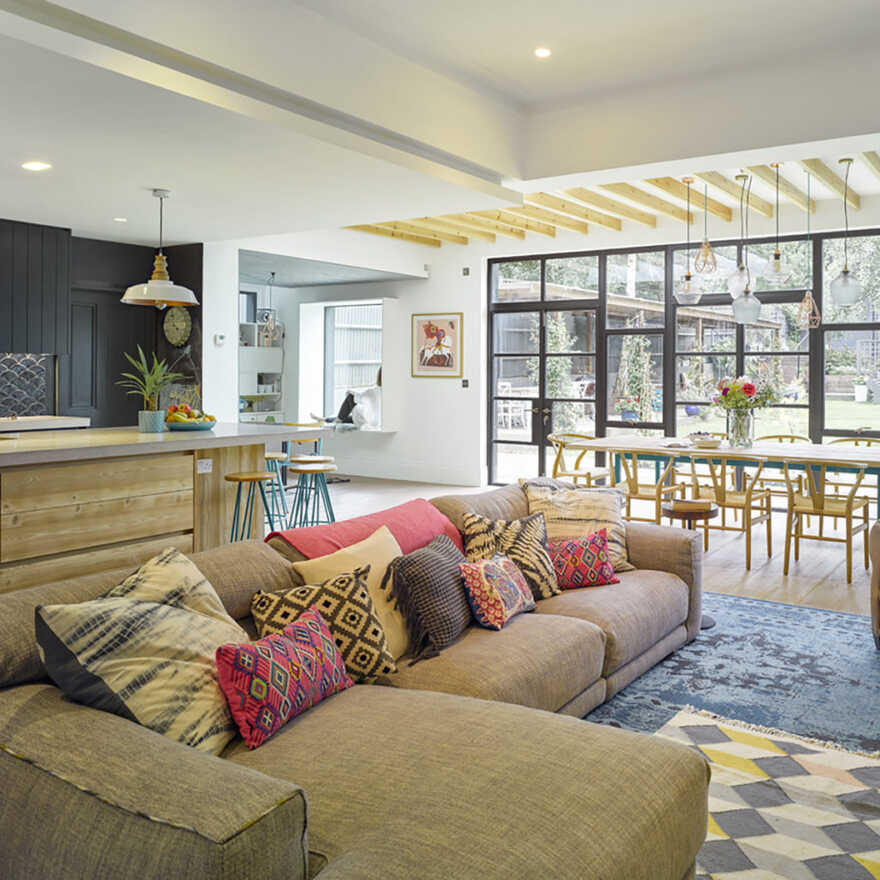 The playroom is tucked into one side of the new extension and is lined on one wall and the ceiling with acoustic felt which also acts as a pinboard for the children’s artwork.
Shelving and cupboards for toys fill the rear wall and the picture window provides a reading nook. The vintage school desks and chairs are perfect for homework and arts and crafts alike. 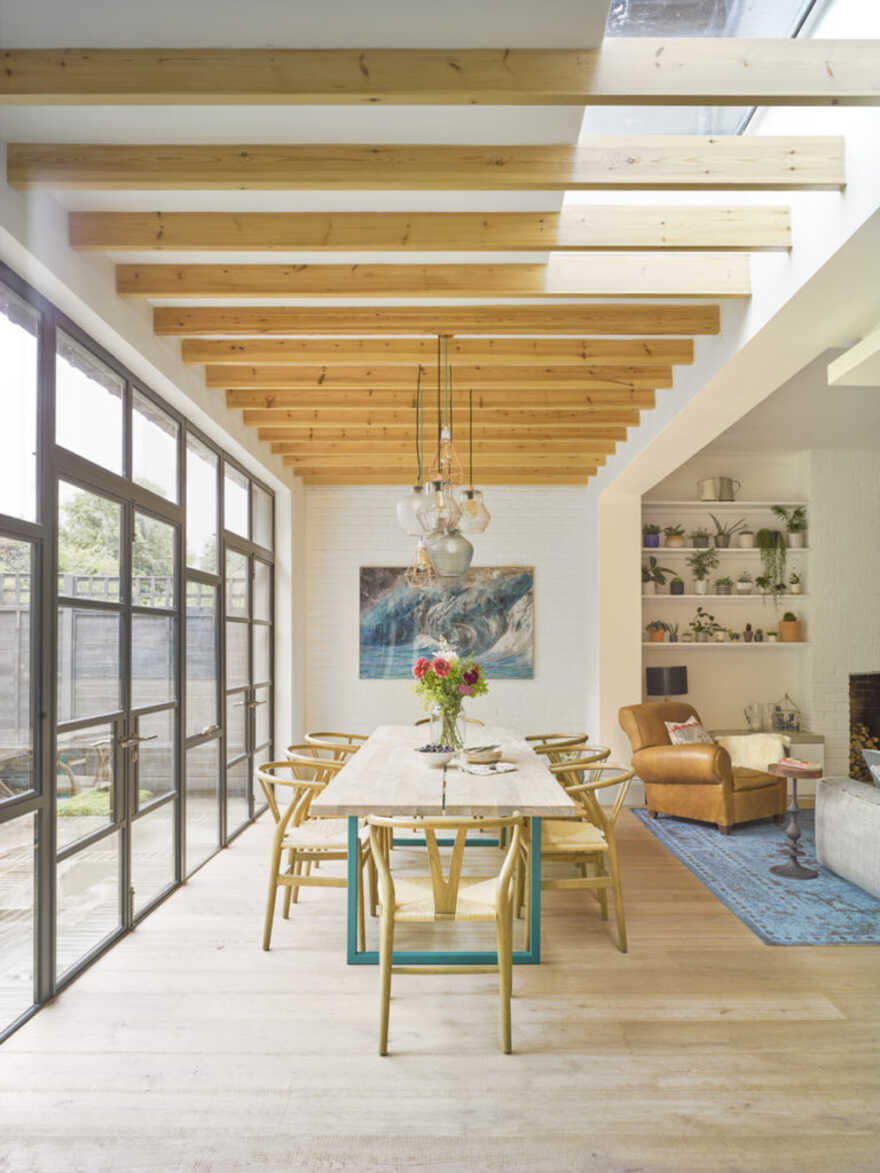 Externally the extension has been clad in charred larch cladding; each vertical slat charred by hand on site. The slats are of varying widths and carefully staggered to create a textured facade to the rear of the house. Again copper lights punctuate the dark timber. 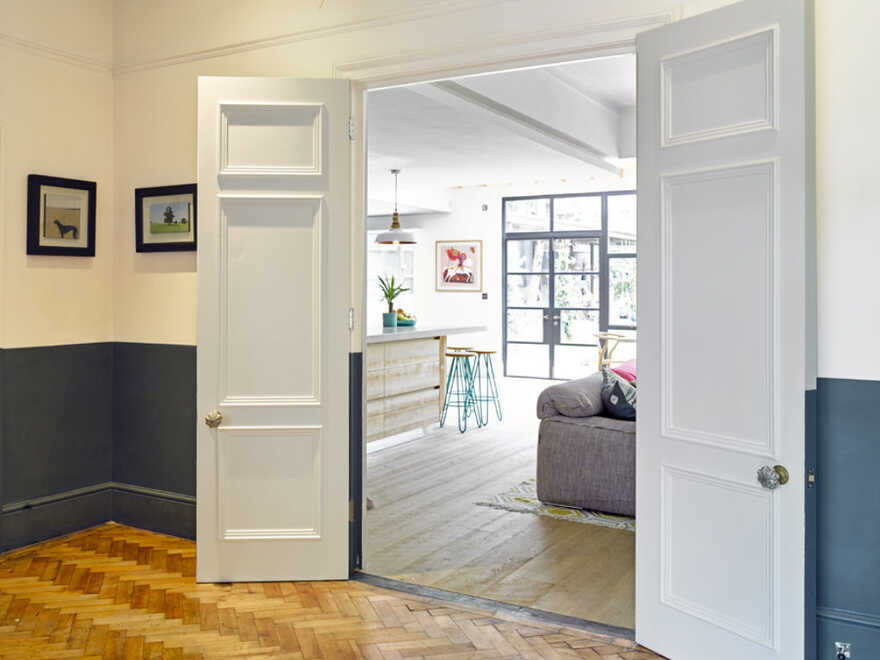 Both front and rear gardens have been landscaped to incorporate scented planting in raised beds and various seating spots for the girls.
Sensitive off-street parking has been created to the front garden by adding a new drive entrance from a side road. 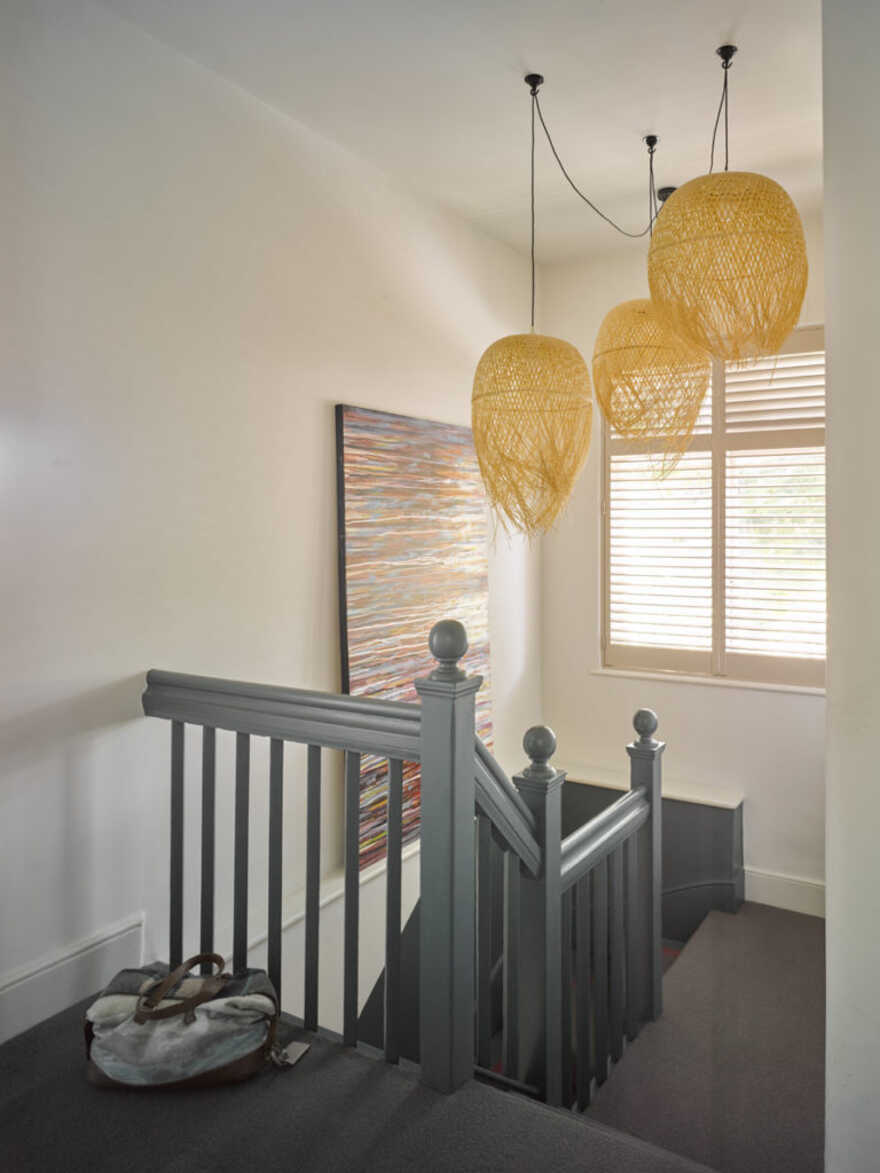 Upstairs a new master suite has been created by subdividing a very large bedroom to create a dressing area and shower room.
The large bay window now has a built in daybed and with storage drawers below. The ensuite shower room is ‘pretty in pink’ with Moroccan tiles and seamless Mortex walls. 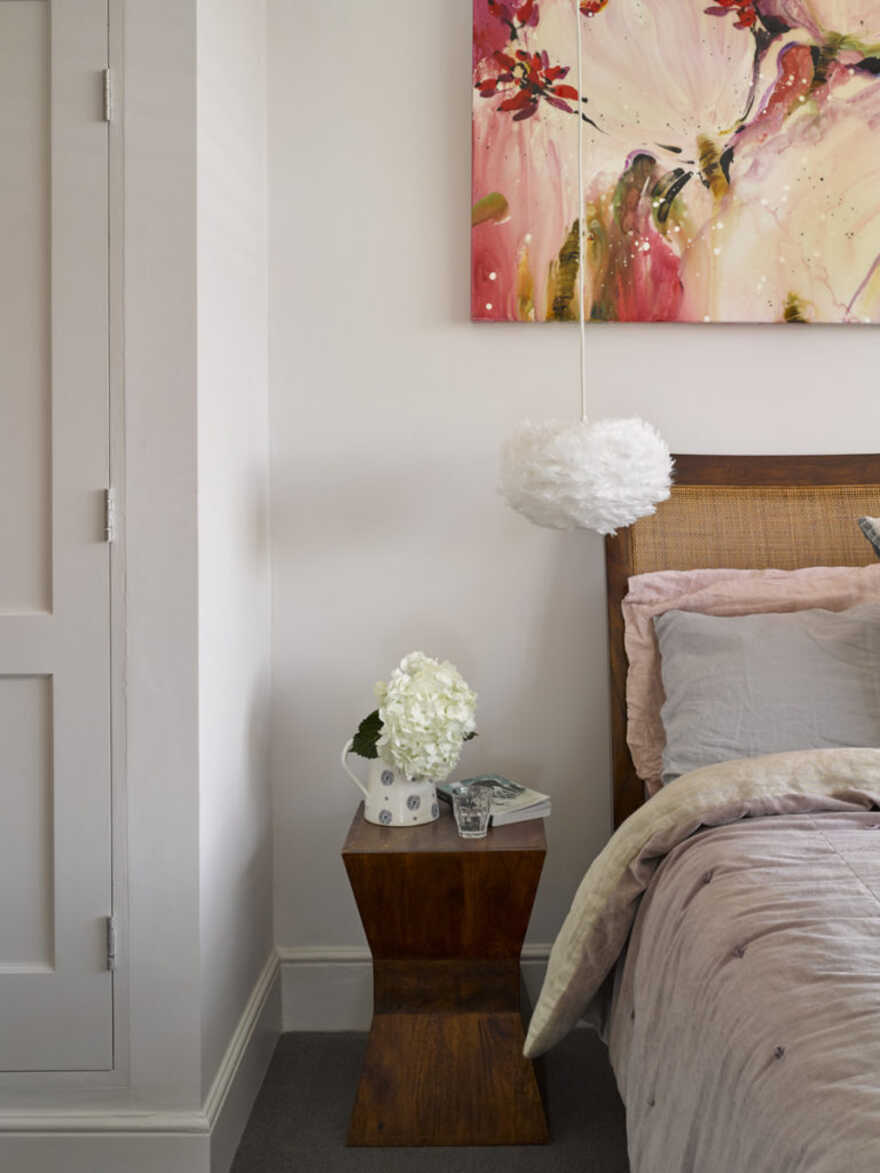 The three girls each have a colourful bedroom with different design details to suit their own styles.
The family bathroom features more Moroccan tiles and a small extra deep bath to make the most of the space.
Beyond the kitchen the existing side lean-to extension was retained and reconfigured to provide a carefully planned utility, storage and boiler room. 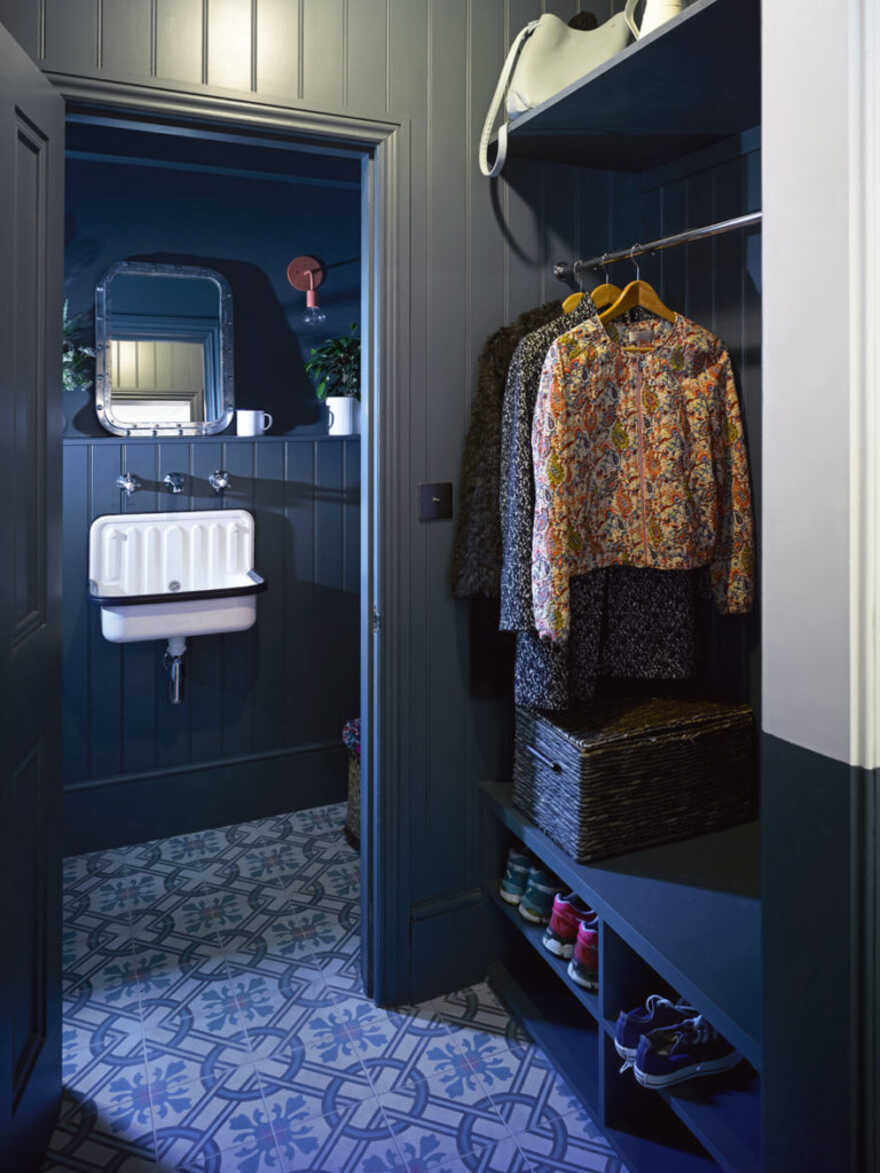 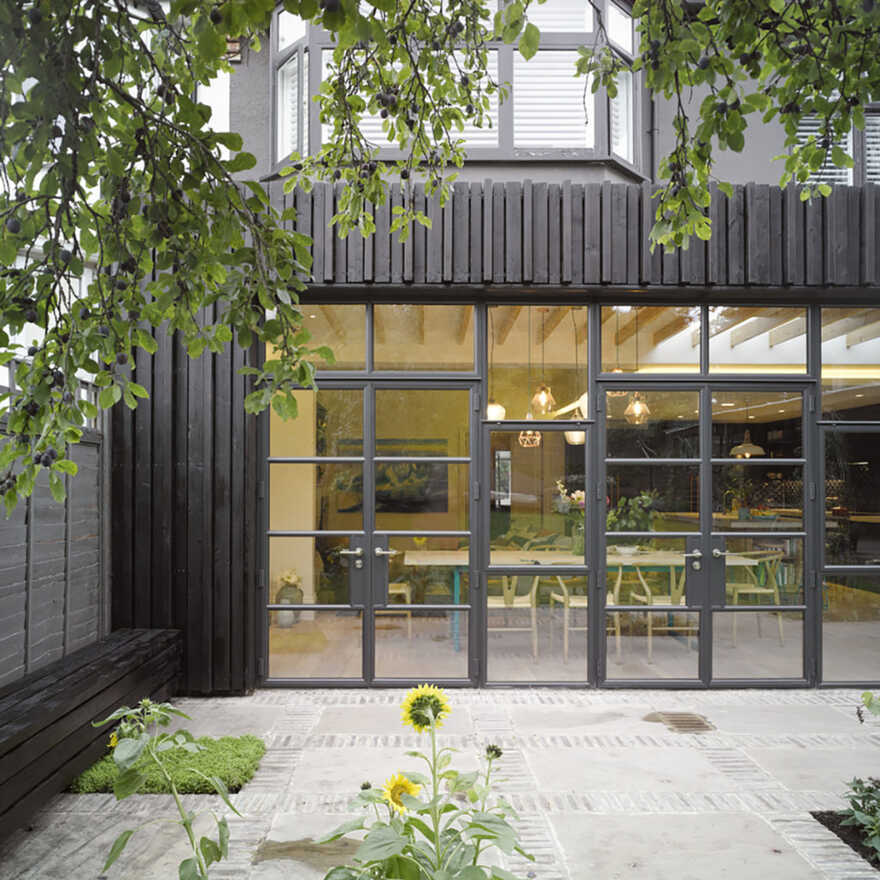 Studio Ve proposes a new and unique wall clock, named The Orbits Clock. The hands of the clock that should indicate the hours, minutes...
Read more

By Removing a Wall Full of Cabinets, this Small Kitchen Feels Larger and Looks Refreshed

Small kitchens require careful design to help them live larger. Before this remodel, this petite kitchen was closed off from the rest of the space and nearly dysfunctional.
Read more

This little house is where Jessica (Jessica Helgerson Interior Design) and her family have been living for the last several years. It sits on...
Read more

When it came to creating a design language that could transition between the original rooms of the Princes Hill house and the new extension, we sought to highlight the best of the period features and use materiality to harmonise the spaces.
Read more

In case you do not like to use the common bathrooms from the places where you travel, the Italian producer Olympia Ceramica proposes a...
Read more
Contemporary Houses

The Bird House has a remarkable design and an extremely efficient plan and the illusion of space is maximised through the use of a void and floor to ceiling glazing enabling a greater connection to the environment.
Read more
Andrew Beasley Photography

Georgian House Oxfordshire is a renovation project completed by London-based Louise Holt Design. From the designer: When our clients bought the house it had been...
Read more
Aaron Leitz Photography

The False Bay Residence is situated to maximize sweeping views of Haro Strait and the Olympic Mountains. A 15-foot-tall opaque entry door pivots open to reveal a view of the Sound through a double-height glazed living and dining space.
Read more
Contemporary Houses

The complete remodel transformed the Pole Residence into to a light-filled, open plan jewel-box of a house, that now delights and serves the client. The focus of this project was on the quality of the space, not the quantity, allowing higher grade materials while remaining budget conscious.
Read more