Originally, the site presented as a triangular parcel of land apologetically wedged between grand, sweeping residences in a leafy suburban street in Teneriffe. A poorly constructed “character house” sat awkwardly on the site, accessed from the smallest frontage. Beyond the house was a dramatic, sheer cliff with views over the river to the North East.

Our Client’s brief was to restore the house and accommodate a family of seven; however the existing house was in poor condition and could not be raised or lifted. An unorthodox solution lay in utilising the sliver of land between the existing house and clifftop. Thankfully, the question “Would you like to build a three-storey extension to the boundary on a crumbling clifftop?” captured our Client’s sense of imagination and Clifftop residence emerged on pieces of yellow trace.

Clifftop residence originated from the idea of building a three-storey extension in a sliver of land perched on the edge of a cliff. As the first sketches were presented a landslide occurred, destroying an enormous historic porphyry wall bounding the property along Walker Avenue. Our Client surprised us by remaining wedded to the idea of building along the clifftop, recognising the advantages outweighed the risks. Moreover, it was decided that the ruined wall would be rebuilt in porphyry to retain the visual amenity to the area. The main approach to the site is from a low vantage point ascending the hill; thus the monolithic stone wall would serve as a dramatic podium for the new structure.

The floorplan of the existing house was divided into quadrants. We selected the largest rear quadrant, which was not visible from the street, to dissolve and connect to an extension of 5m with a 27m long elevation to the clifftop. The extension is raised up 1500mm from the existing house to capture river views and breezes and also to the upper storeys to float above the clifftop and tree canopy when viewed from the base of the cliffs.

A weathered and natural material palette has been inspired by the texture of the cliff face. Concrete was utilised as the structure and main fabric of the building, deliberately exposed and finished in a worn and weathered manner. Timber window frames and cladding were introduced to soften the architecture from a Brutalist statement to an expression of a finely detailed and crafted interior tailored to the complex dynamic of a family of seven.

Bedrooms are split between the original house and extension, with the family brought together in living areas on the ground floor or the third storey which was designed as a “man cave” (or family room according to the five females) and roof garden.

Central voids funnel a stream of light into the house whilst allowing cross ventilation. The voids provide visual and acoustic separation between rooms, whilst still affording a vertical connection. In order to balance the shared spaces with the need for solitary, private spaces, we were able to convince our Client to extend the brief to incorporate a series of small “interludes”.

Clifftop residence was built for a budget appropriate to the complexity of the site and constraints of the existing house. Restraint was employed with the sizes of rooms and the joinery design enabling spaces to be flexible. The building’s main material is concrete and expense was saved in working with the engineer to design the most efficient suspended concrete structure. The slab itself is impossibly thin and was only achieved by working collaboratively with 3D software. Joe Adsett Architects also collaborated with an Interior Designer who is a close friend of our Client and brought a wealth of knowledge to the resolution of detailed cabinetry items. On site, a close relationship with the contractor allowed further improvement to the design intent and details.

Clifftop residence makes a meaningful contribution to innovation and excellence in environmental sustainability through the concrete structure being used in a manner similar to “reverse brick veneer construction”. Concrete walls and ceilings are deliberately exposed where thermal mass is relied upon internally. External heat gain through the concrete walls is minimised by isolating the cladding from the walls with timber battens, and a layer of sisalation wrap. The external cladding systems act as a rainscreen to the concrete frame. Heat gain is minimised to the openings by using plantation timber frames glazed with low-e glass and solid timber louvres. Glazing is shaded by large concrete eaves and cast in external blind recesses house automated canvass roller blinds. The long thin building envelope encourages natural light and ventilation and a 22m long swimming pool extends along the cliff edge to provide cooling breezes to living spaces.

Clifftop residence is defined by its lightweight rainscreen which is an innovative means of minimising heat gain to the thermal mass concrete walls. Metallic colorbond steel was selected for its appearance and enduring quality. The colour selected was “astro” which complements the natural material palette selected. The material was custom folded into cassette panels, flashings and cappings to create a breathable external skin to the masonry frame. 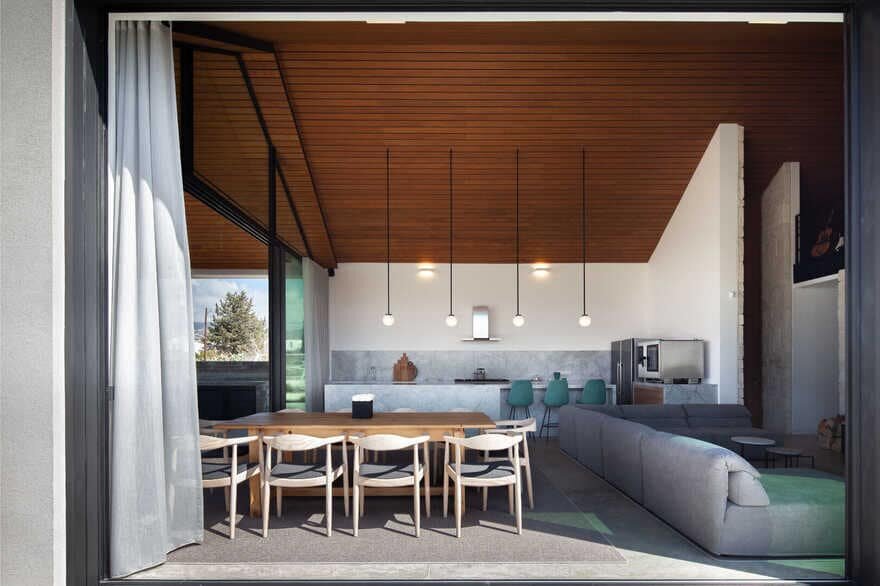 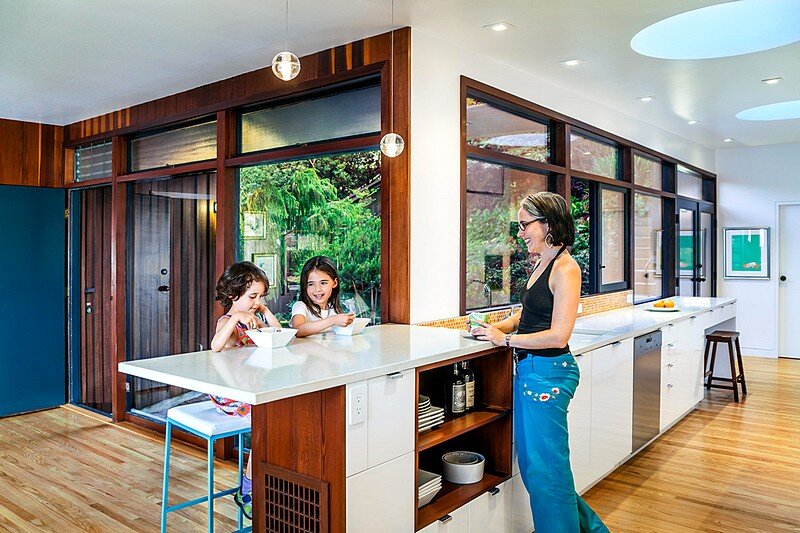 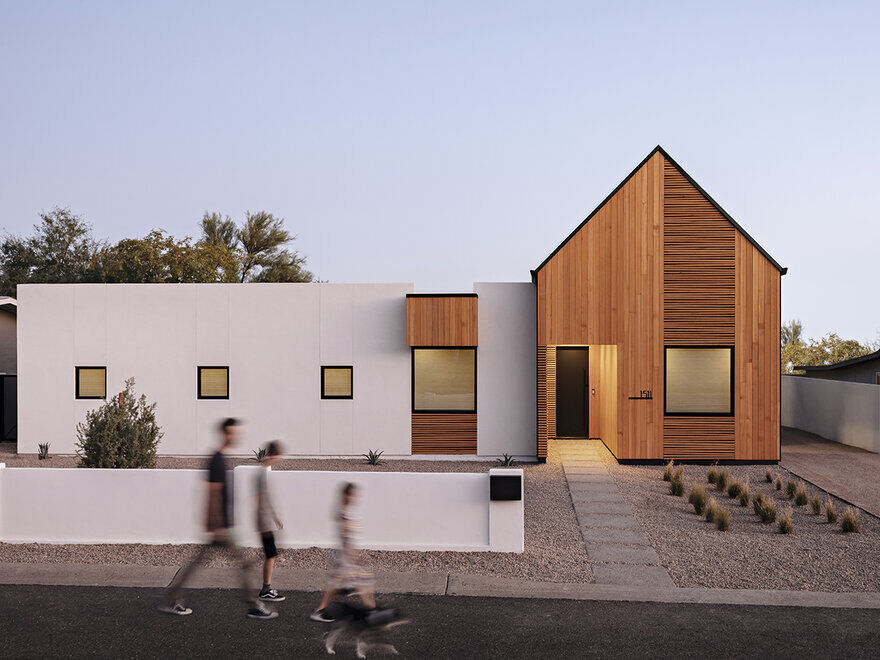 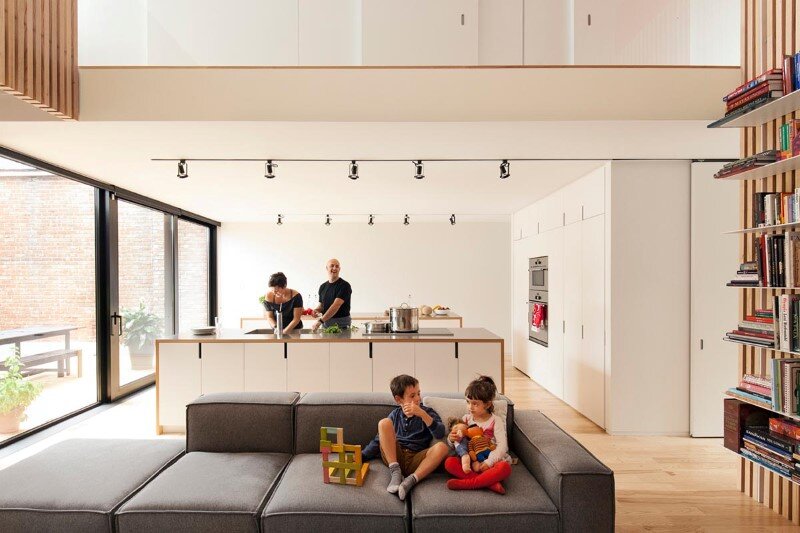 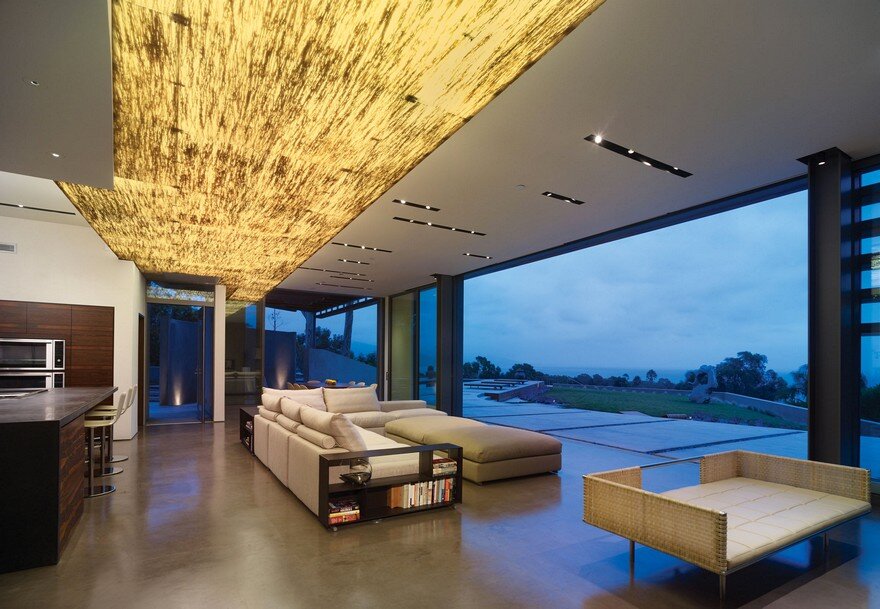 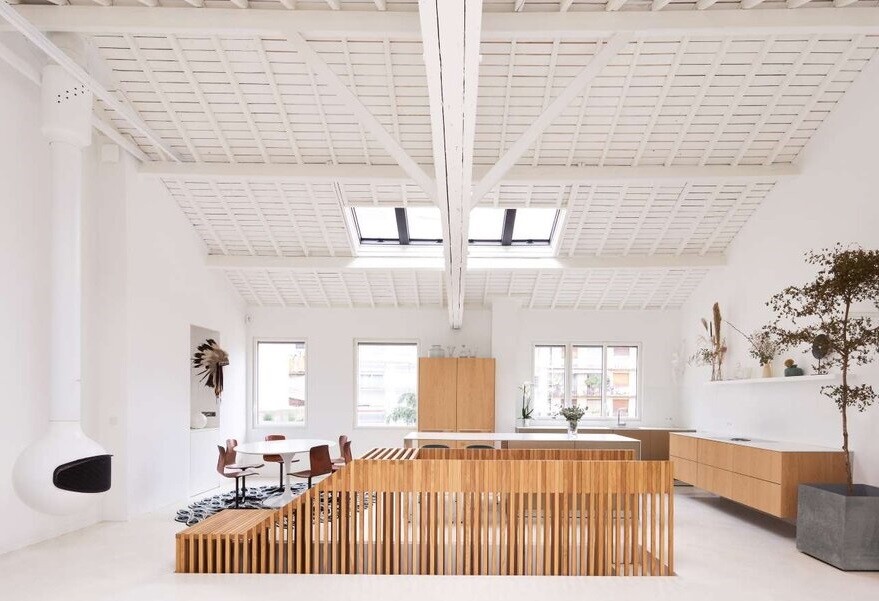 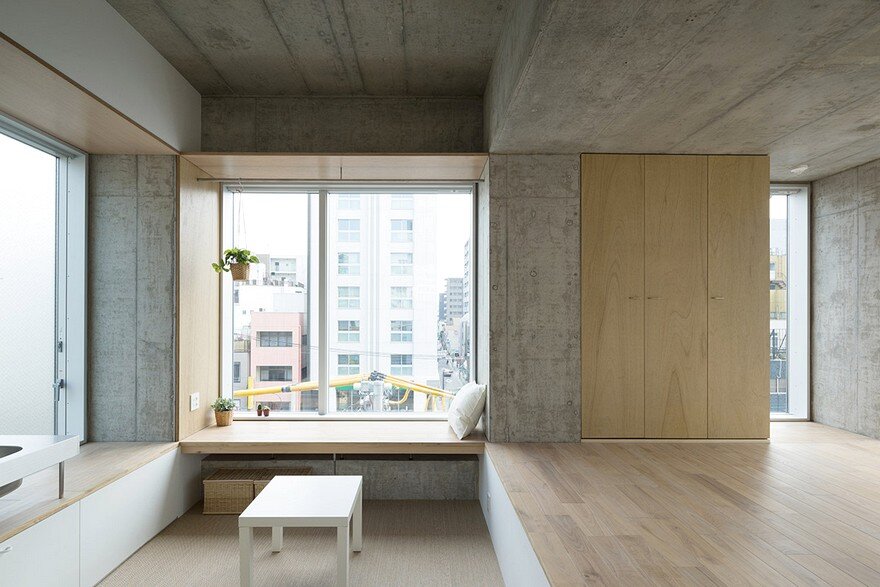 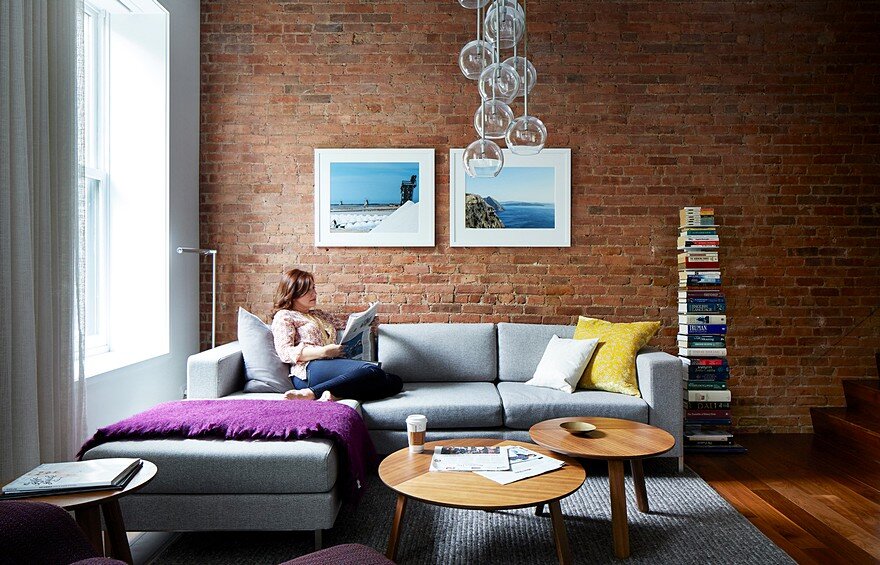