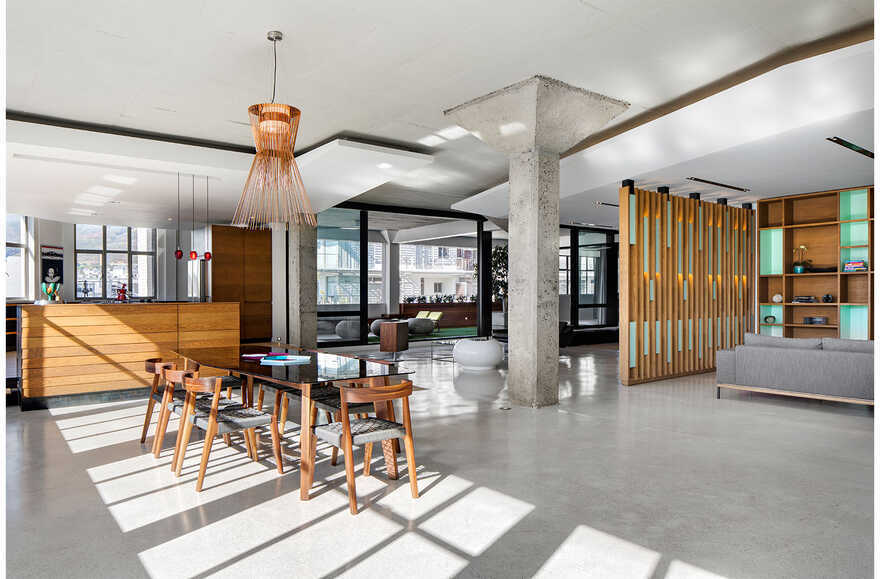 The Leyden Loft represents the conversion of an entire building floorplate from what was a commercial space previously used as a photographic studio into a residential apartment. The architects were involved in the transformation of the building some years back with the addition of a double level penthouse and three other residential lofts on the upper floors. 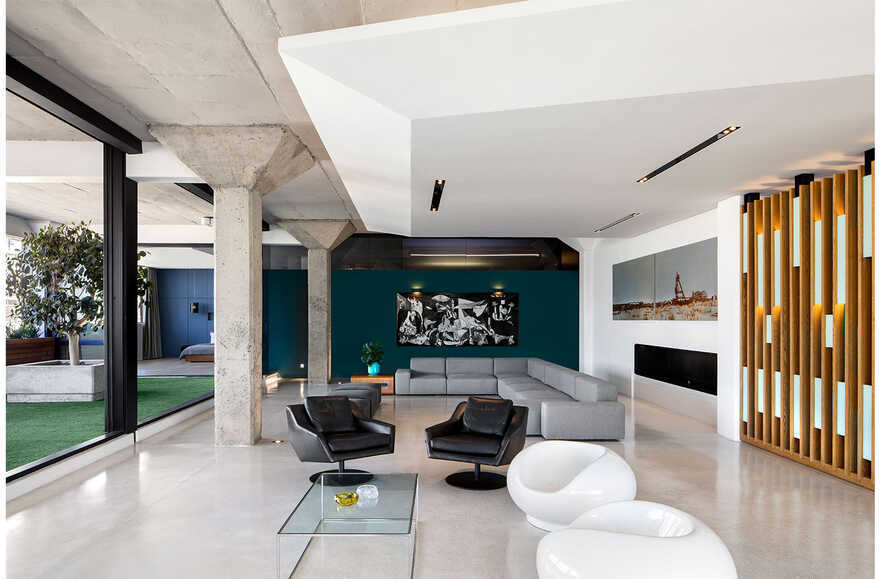 The brief for Unit 5 was primarily not to ‘fiddle’ with the generosity of the 400 m² existing space, both in terms of footprint and the floor to ceiling height, but to re-program the space for comfortable living within what is essentially a non-compartmental, singular space. Located on the 1st floor level, light and snippets of view were important considerations as was the carving off of an area that could be dedicated to external living – making a slice of Cape Town city life more tangible than simply through windows on the apartment perimeter. 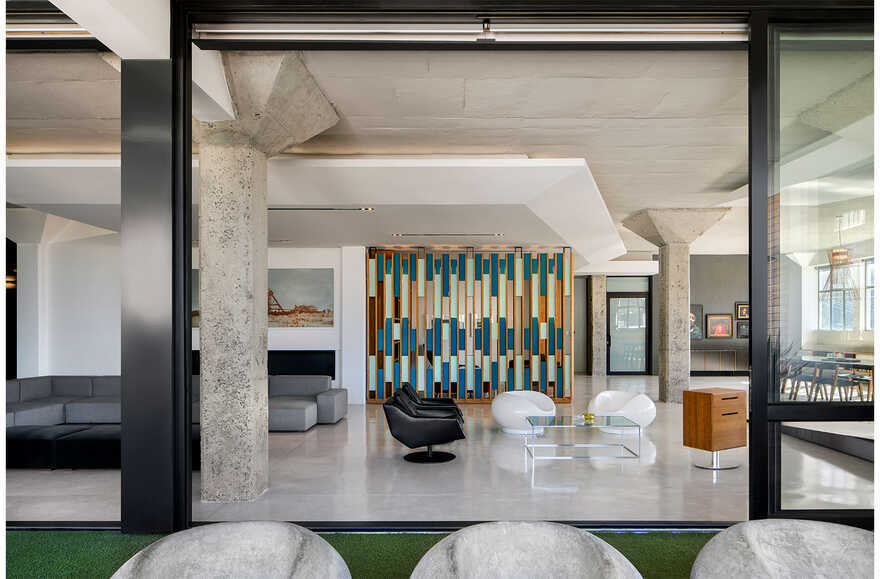 The planning & spatial arrangement of the apartment is informed by the existing concrete column grid dotting the floorplate. Early in the process the decision was made to retain these uniquely profiled columns as freestanding elements, reducing them back to their original raw concrete finish, acknowledging some of the honesty & memory of earlier use. 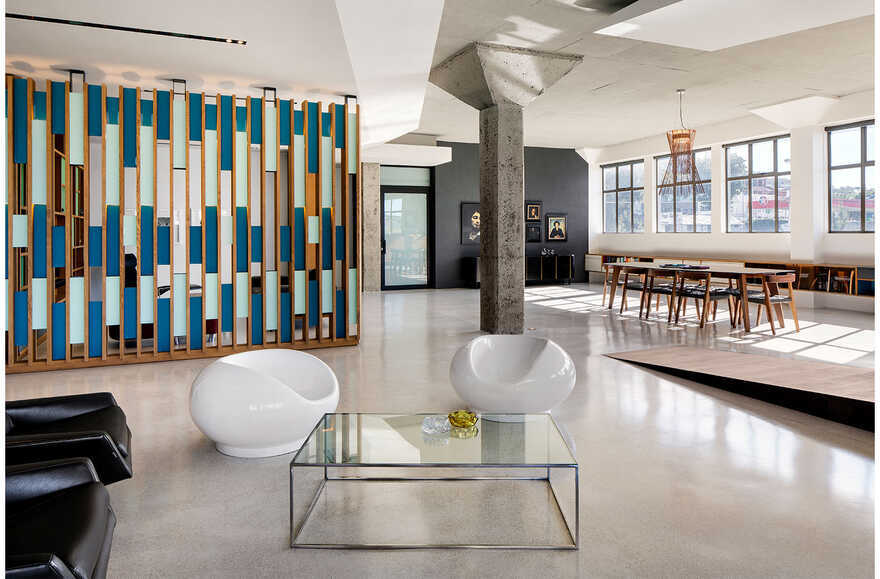 New insertions in the space are restrained. What is new connects subtly with the old. The kitchen is relocated to the dominant chamfered corner. On an elevated platform, accessed by way of stairs and a spatially defining ramp, it commands the open plan interior. Its dual aspect however permits connection to the newly formed external dining and living terrace beyond. The more private functions like bedrooms and bathrooms are tucked away behind a long, linear length of wall, forming an artwork backdrop to the main living space. Entrances to the bedrooms are discreetly marked by two of the defining columns and a subtle change in level denotes the switch from public to private. The dividing wall stops short of the continuous slab soffit; high level clerestory glazing in-filling the void and assisting with the retention of a visual connection. Light is shared & borrowed between spaces. 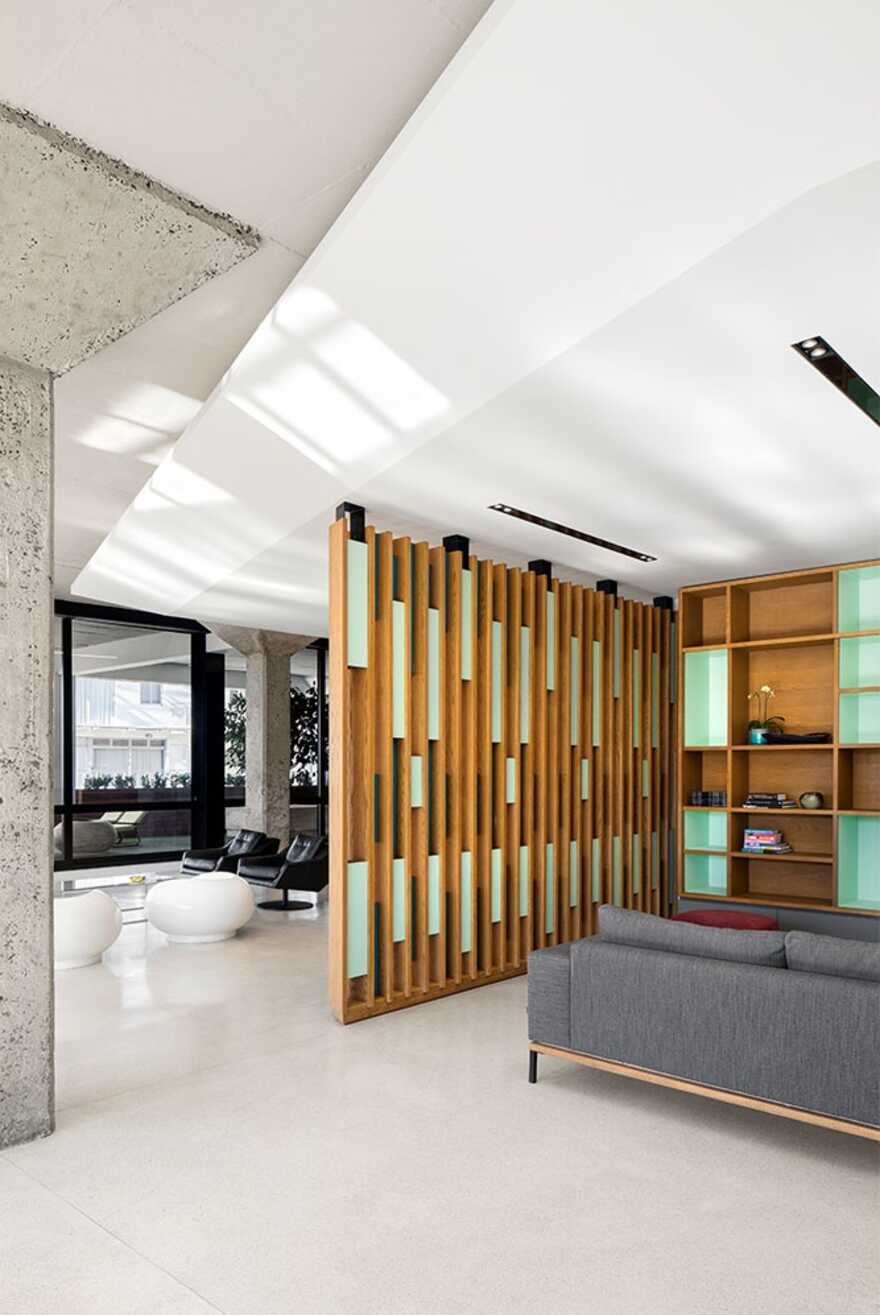 The absence of walls as a means for defining space, creates an opportunity for screens & built-in joinery elements to play a role. These, together with shaped & profiled ceiling soffits and carefully articulated zones of lighting are used as subtle markers of the functions occurring below. Further, they permit for the routing & concealing of newly reticulated services onto an existing slab soffit. 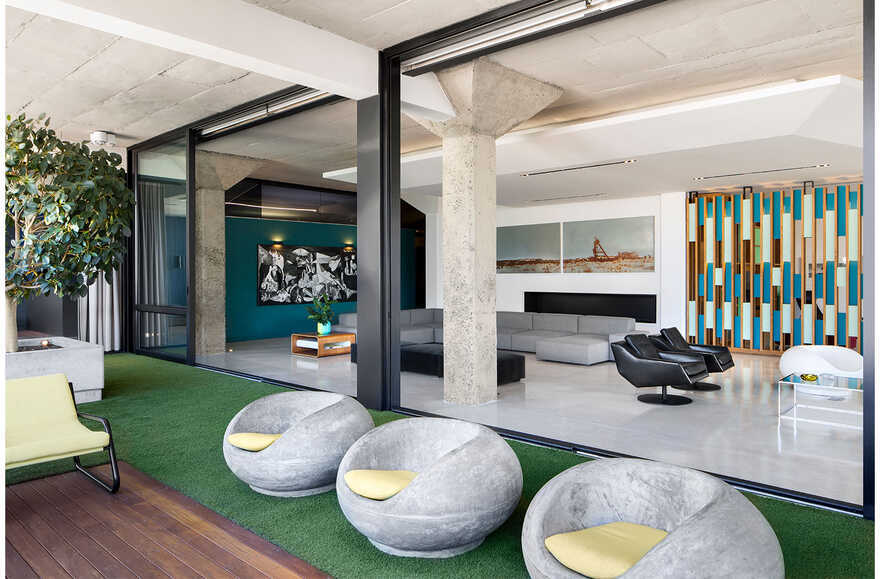 The luxury of large space can often work in direct contrast to the desire for cosy, comfortable, home/space-making, but in this instance intimate zones co-exist alongside expansive ones and the ‘bare bones’ nature of space is part of the apartment’s balance & charm. 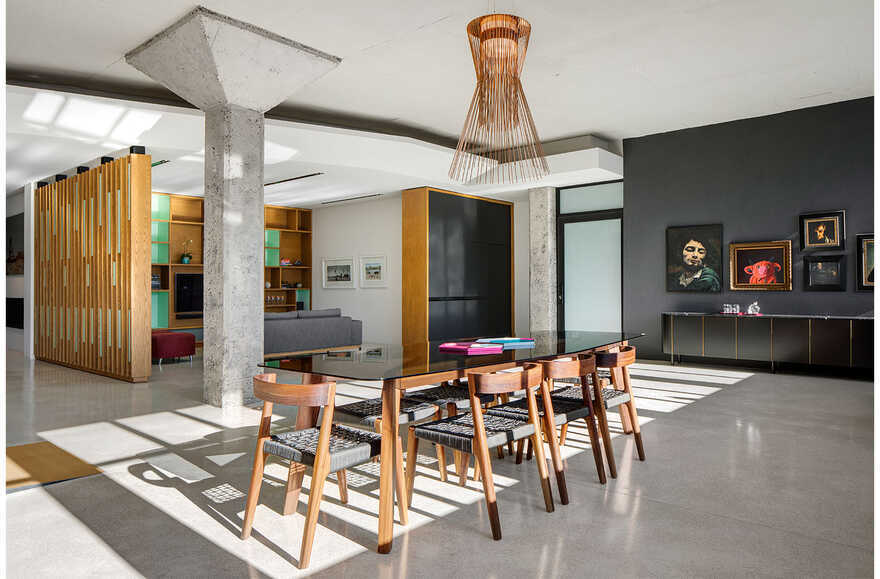 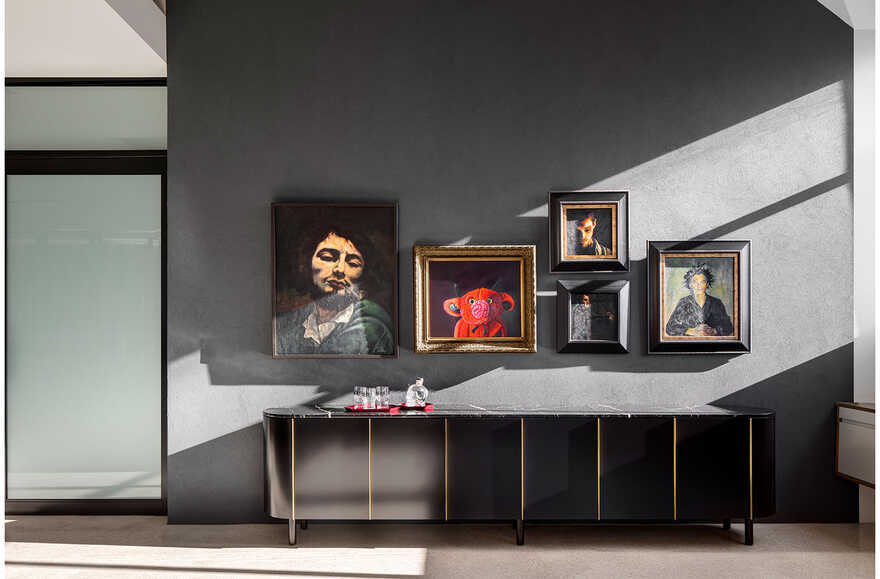 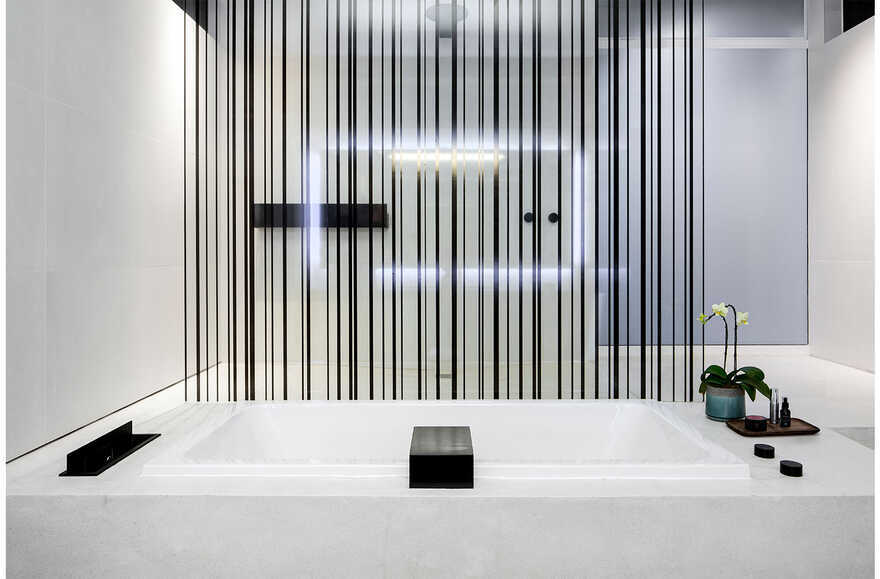 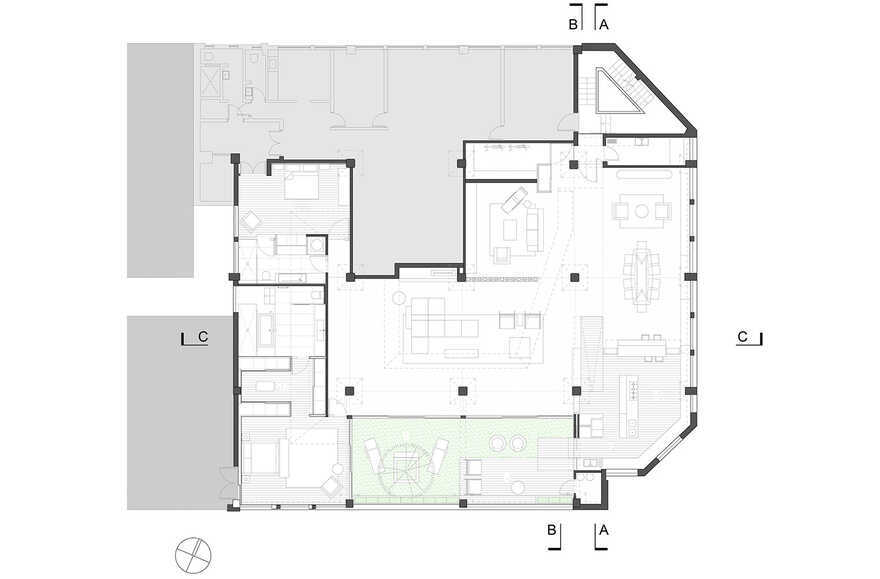 A line driving the concept of transforming a Mid-Victorian terrace house. A simple brief - give us more light, flexibility in spaces and make the old house sing. ​A home to grow; a young family - owners can now enjoy the space and flexibility and stay within the community they've come to love. A home that allows them to admire the rejuvenated heritage features of a +130yr old house.
Read more

A two-storey apartment is located in Kyiv downtown, in the house built in the last century by a famous architect Joseph Karakis. The architecture of the building, the historical context that surrounds it, the view on St. Sophia Cathedral from the apartment’s windows, and the unique atmosphere of the old city — all of this became the semantic background and the starting point for renovation of the apartment.
Read more

New construction of a single family house for a family of seven. The new two level building is organized around a lightwell on the entry level. The bedrooms are located to the northeast side, whilst the family room and kitchen are at the southwest side enjoying a view of the inlet beyond.
Read more

The project is a major renovation of an apartment built in the early 60´s in Sao Paulo, which already had a good plan, yet compartmentalized in it´s original distribution. Our proposal retains much of this distribution, but applying a series of changes that transform not only the space of the apartment
Read more

A short drive from New York City, the Clinton Corners residence is nestled discreetly on a sylvan lot in the Hudson Valley. The house was envisioned as both a family retreat for weekends away from the city and a gathering space for special occasions.
Read more

Refurbishment of a Semi-Detached House in Lisbon

Restelo house is a semi-detached villa refurbished by the Portuguese studio João Tiago Aguiar Arquitectos. From the architect: This semi-detached house is located in an...
Read more
Renovation Projects

Frog Castle is a grand period property in the heart of Alderley Edge, Cheshire. The brief was to remodel the ground floor living spaces and to create additional area in the form of a ‘glass box’.
Read more
Contemporary Houses

It is a rebuilding project for a residential area lined with houses from ancient times. Designed by Alts Design Office, the Yamashina House is in...
Read more
Archier

The Willisdene house leverages Australia’s largest latent asset – the stereotypical backyard – to create a new heart for the dwelling and family, re-conceptualise the relationship between the house and garden, and to embed landscape in the ritual of everyday life.
Read more
Contemporary Houses

René Rissland in collaboration with Peter Dürschinger have designed this German family house, located in Wilhermsdorf, Germany. Description by René Rissland: The municipality of Wilhermsdorf is located...
Read more