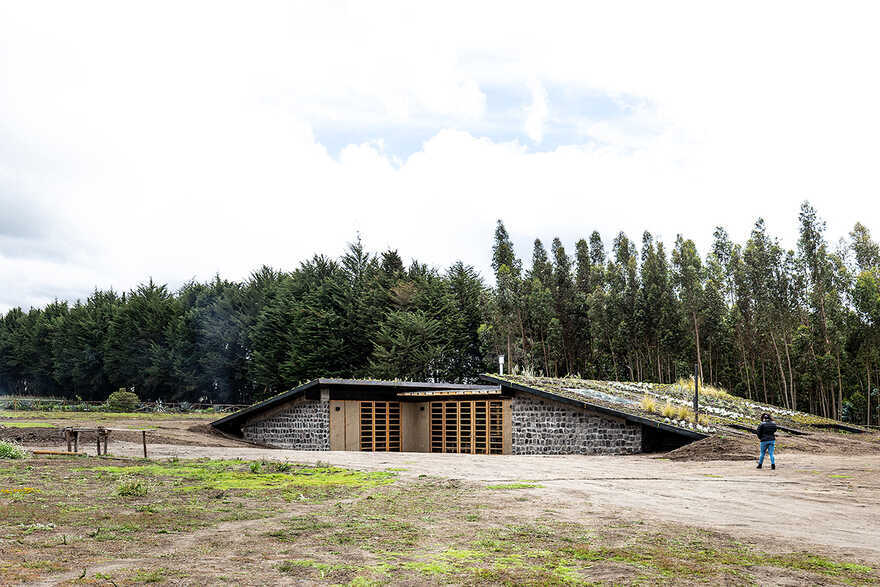 The Patios Lasso House is located in the province of Cotopaxi, in the area of Lasso. The land is part of the area of Ranchos San José in the middle of a rural environment. The order was a family house thought to enjoy the countryside, the sowing, the landscape, and the environment. 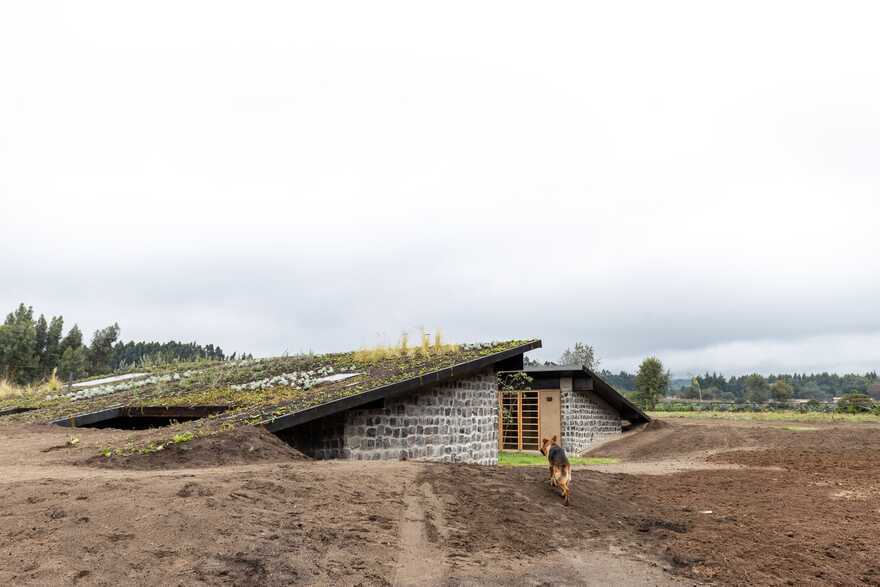 The proposal takes into account some conditions for its implementation and functioning. It was proposed a discrete architecture, almost imperceptible, thought from the raw and natural material. A heavy piece contained in the land and that almost disappear in the environment while being part of it. 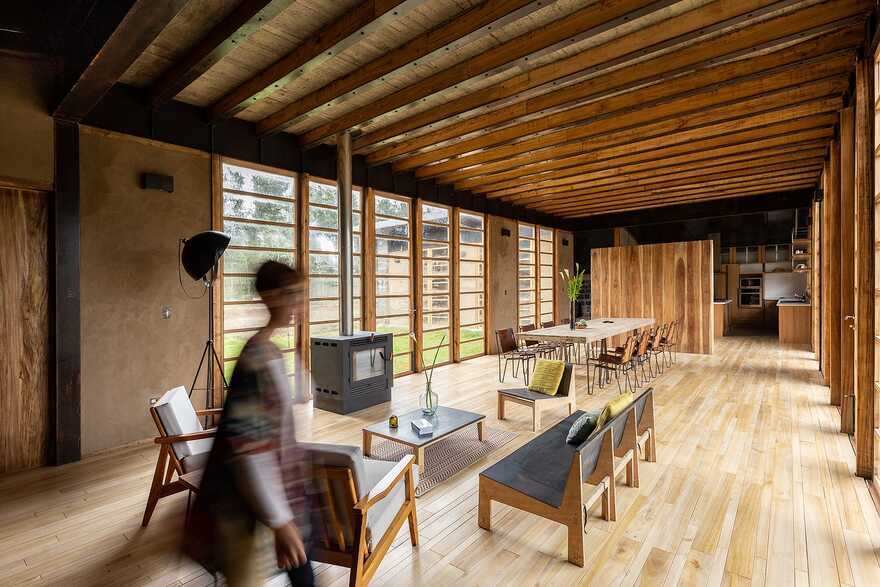 The Idea
The Patios Lasso House was thought as an element buried in the ground, discrete, and that do not represent an obstacle in the land. Solid stone walls are responsible for holding the inclined roof, which starts at the soil and raises containing vegetation as a continuation of the land. The stone walls in the form of “C”, displaced because of functional reasons, contains the private and functional areas. A stripe of services (bathrooms, storage warehouses, machinery rooms) in the lower area of the space works as an insulating chamber for the rooms and auxiliary spaces such as TV room and game room. 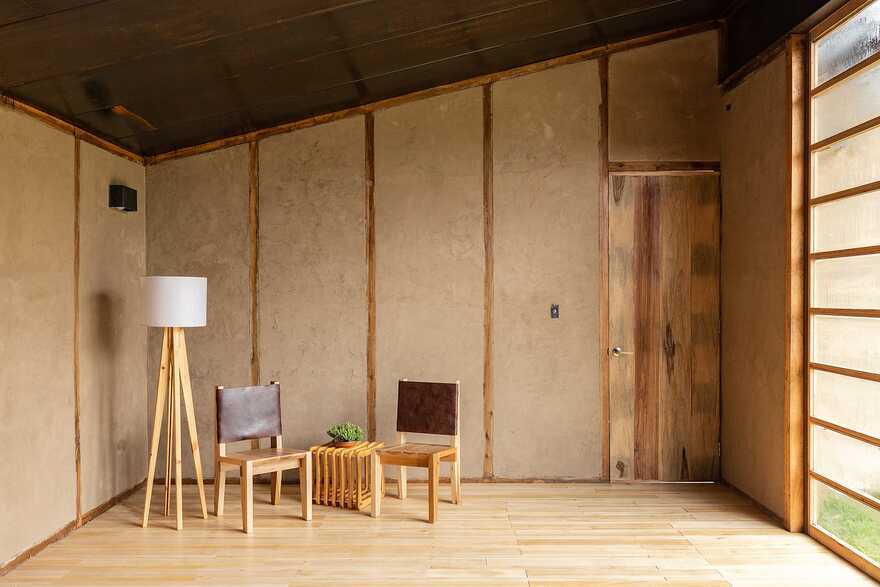 The social area articulates the two parts of the house through a transparent space, which physically and visually connects the two exterior courtyards. This central space is the meeting area of all spaces. A high, clear, and flexible space, only limited by two independent wood walls in each extreme, and that separate it from the surrounding spaces (kitchen and TV room). This area of the house, defined as a social area, is where is located the main heat source, a hearth. 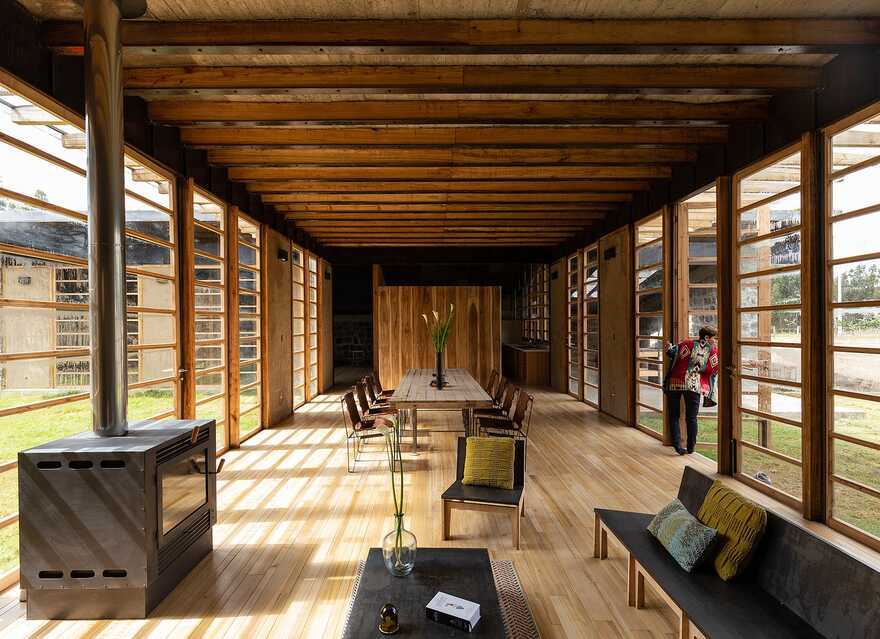 Each space of the house is confined through bahareque panels and a collaborating structure of solid eucalyptus wood. The bahareque improves the thermal and acoustic conditions of the house, while its texture and colour reinforce the intention of generating a discrete object in the landscape. All the outer limit of the house is formed by a series of collaborating columns of solid eucalyptus wood, generating panels of bahareque or glass screens that allow the entry of light, the passage of facilities, and the entrance of the house. 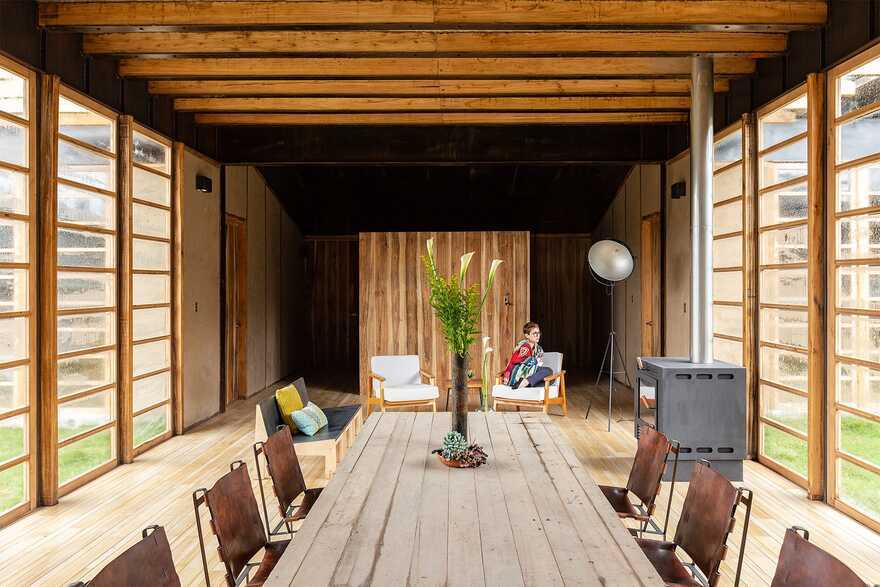 As for the roof, it develops in two areas over the stone walls. The roof plans are made up of metal trays of 10 m and 12 m in length and a thickness of 4mm, which allows us to contain 25cm of insulating stone material and soil for adequate growth of vegetation over the house. This roof also connects the two sides of the land, as it can be transited on it and pass from one side to the other.
The roof also extends over the only open-covered space of the house that creates a barbecue area, a space directly linked to the kitchen, and open to the main courtyard.
The intermediate slab, an accessible surface, was calculated as a mixed structure that is supported on wooden and metal beams, and they are the same that extend to generate the transparent roof over the entrances. 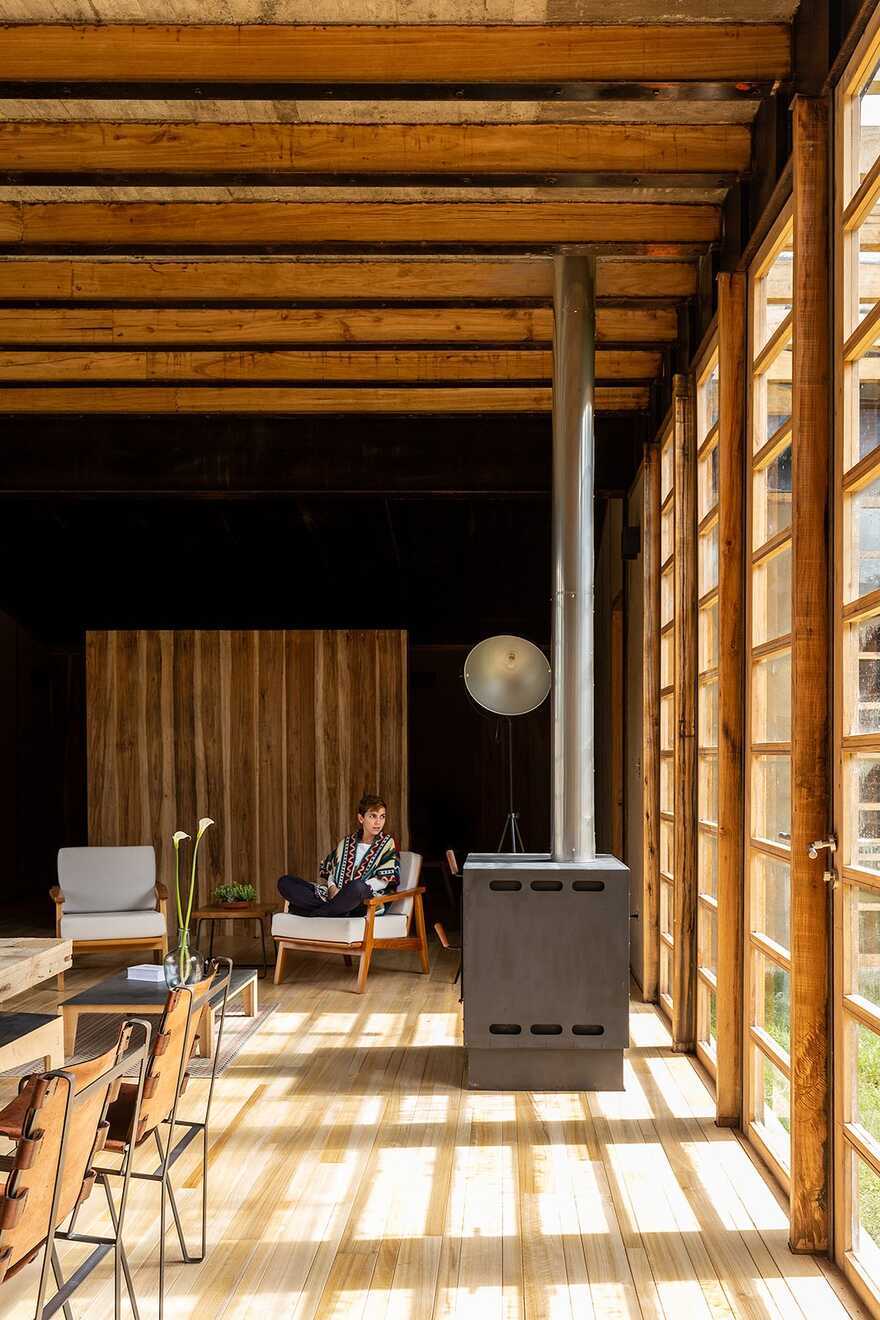 Landscape
From the beginning, a discrete project was proposed, which compounds itself into the environment, which does not stand out on the ground, where the vegetation prevails over the built space. This landscape strategy is the one that governs the entire area, an idea that suggests that the landscape surrounds the house. 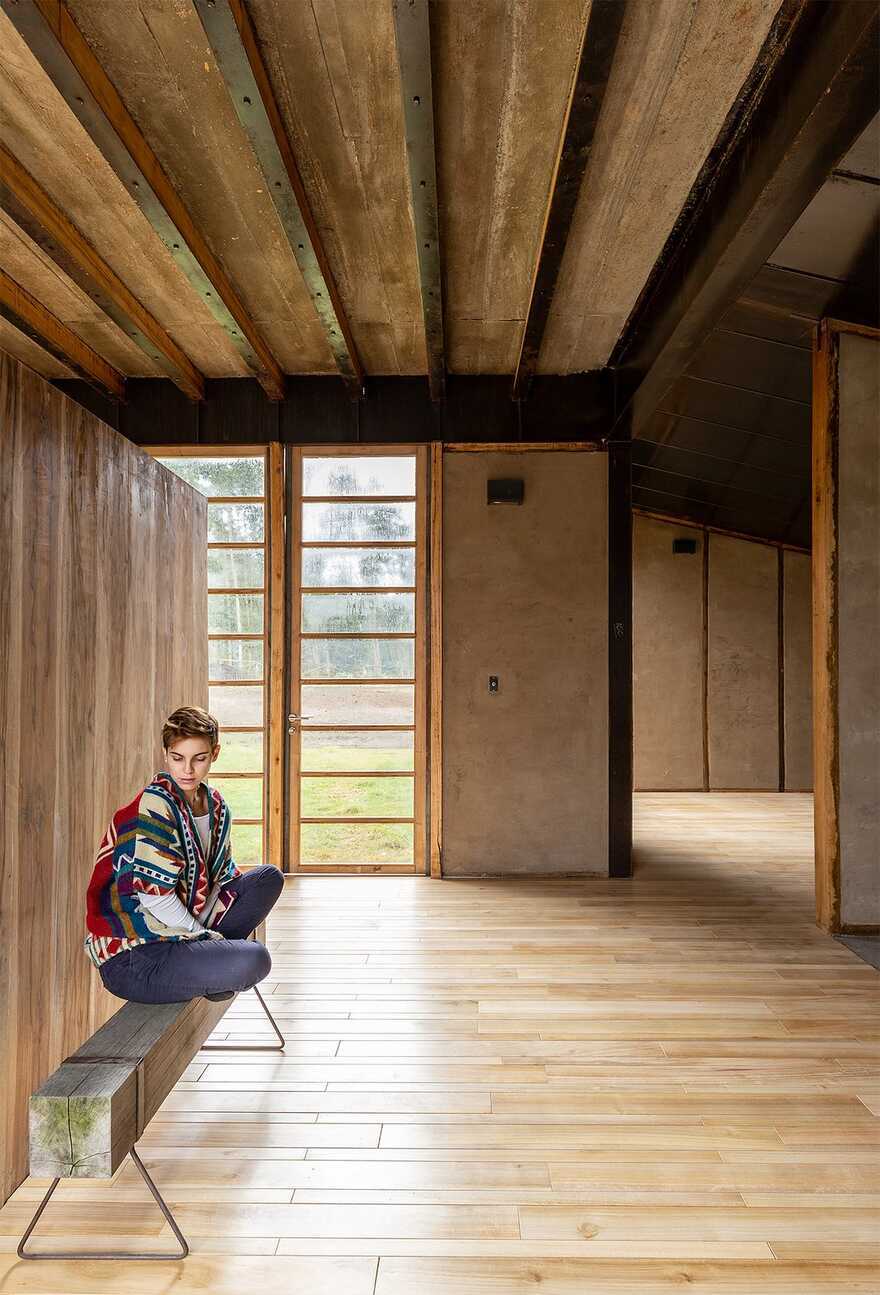 The vegetation starts at the ground and grows over the house through the roof, overflows and falls covering the stone walls. Between these two vegetable areas, two courtyards are opened, that generate green areas in the house through the glass screens. Courtyards that are raised with a lot of vegetation in the area, which invades and generates micro-landscapes that are seen only from the inside. 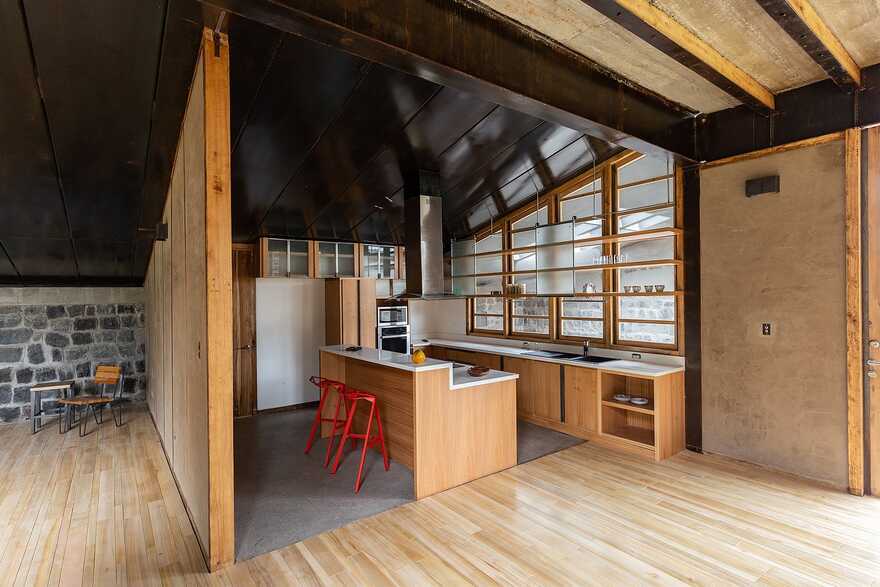 Around the house, a series of vegetable filters, generate a path to the house. Trees, shrubs and different types of floor materials differentiate the areas that surround the house and that direct views, entrances, and routes. 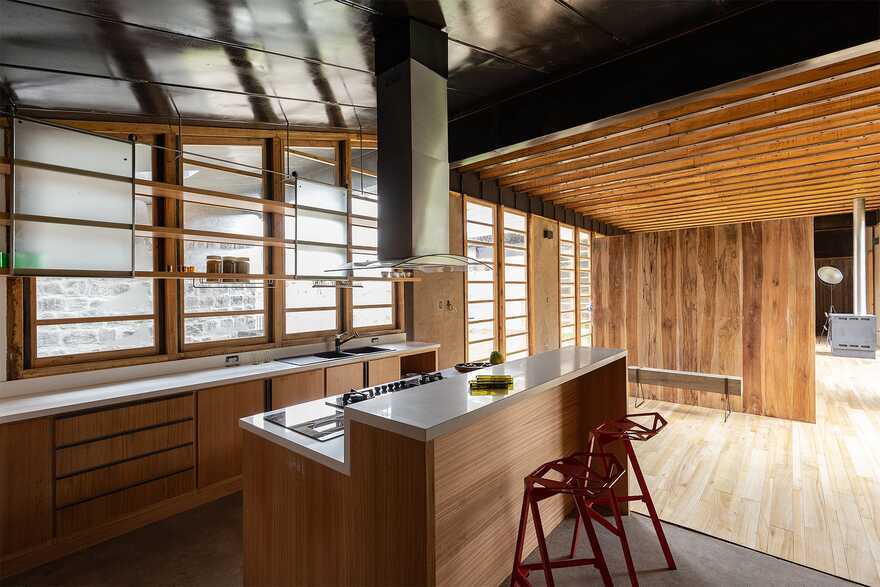 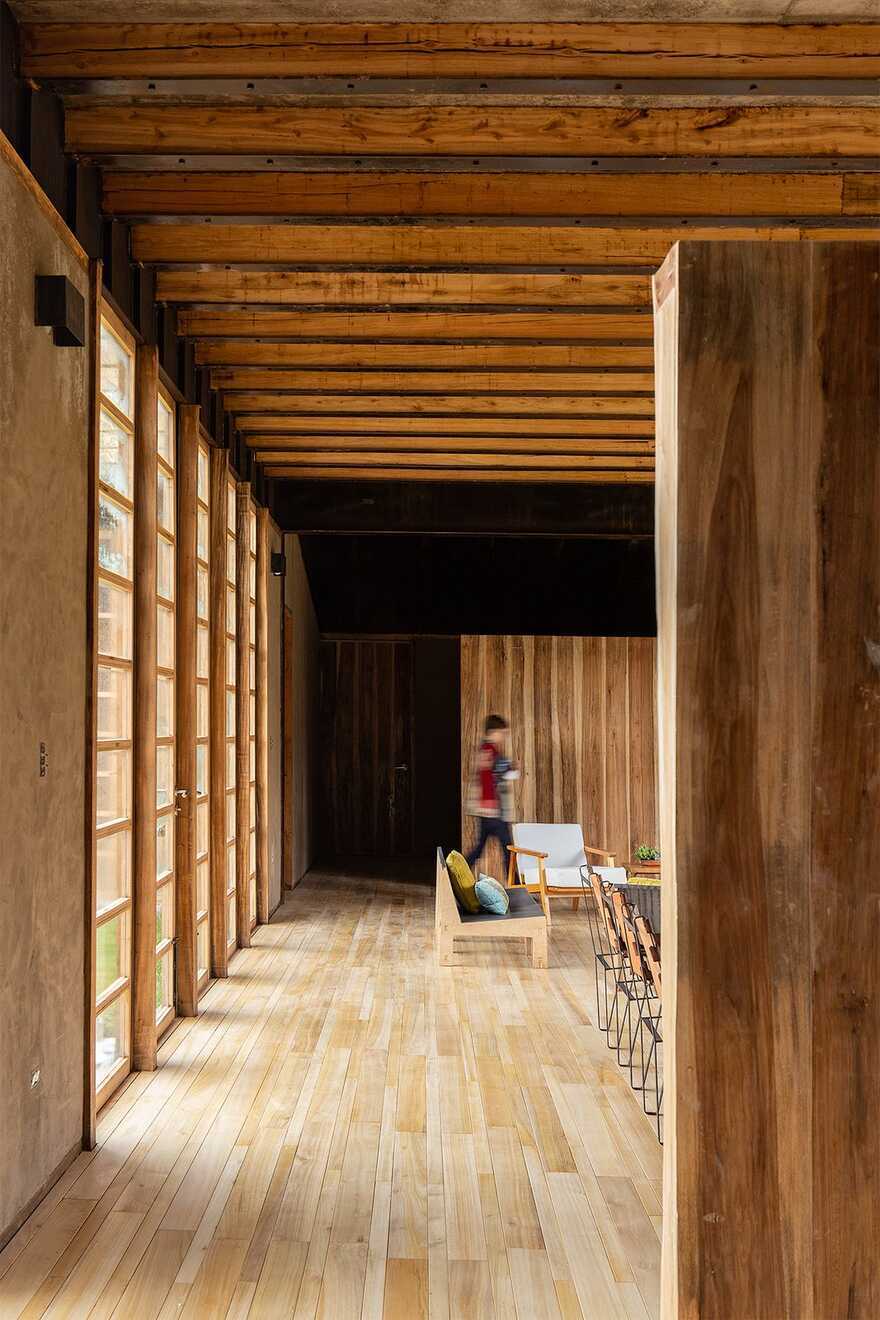 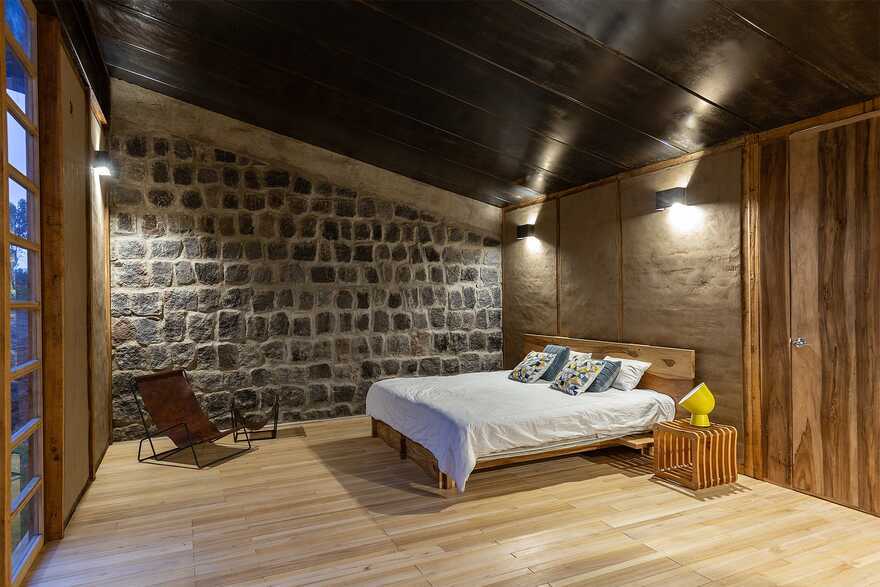 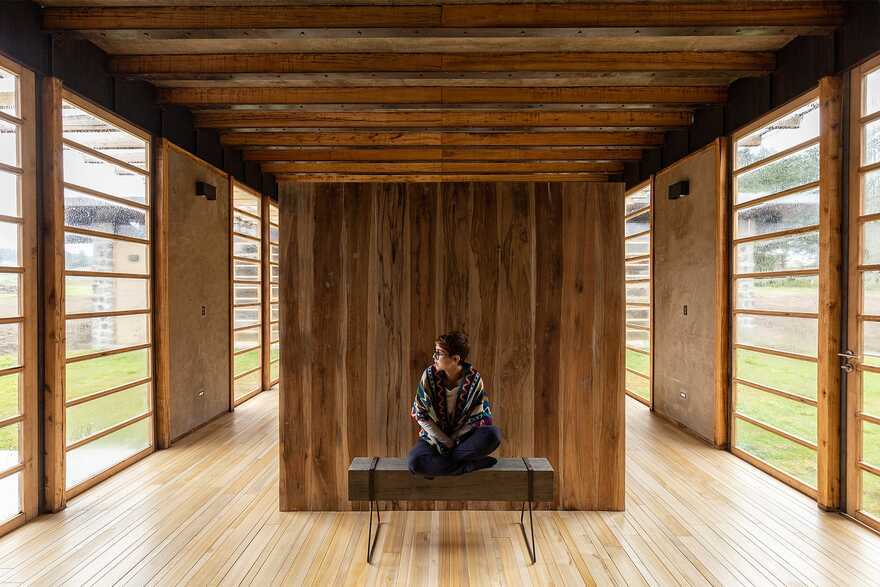 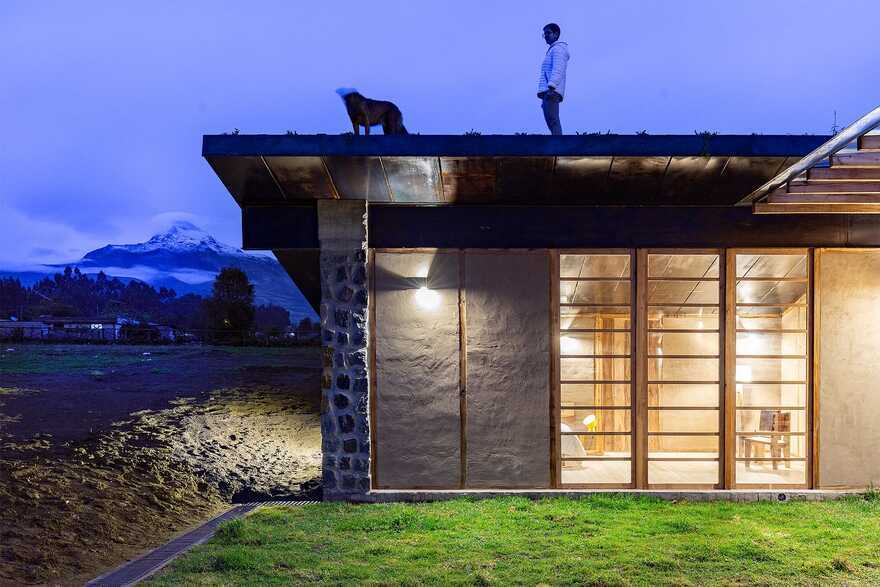 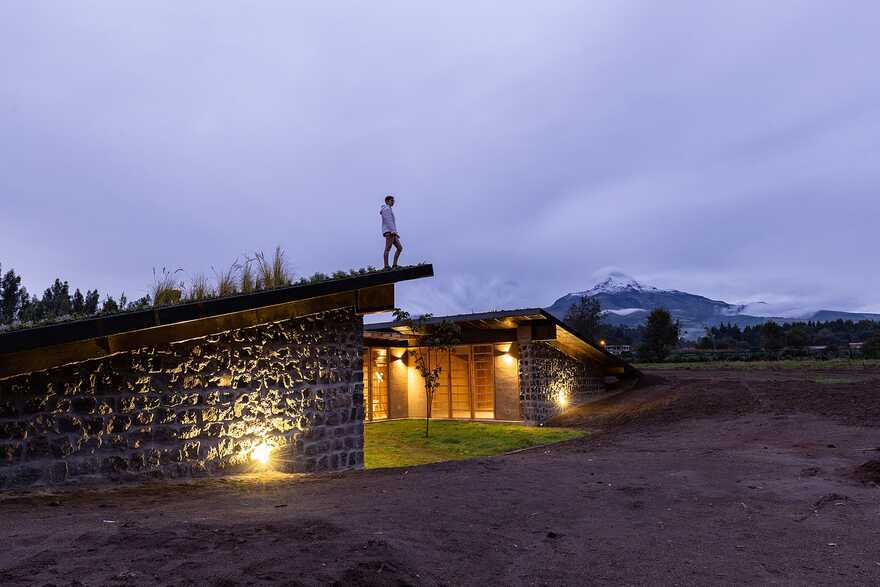 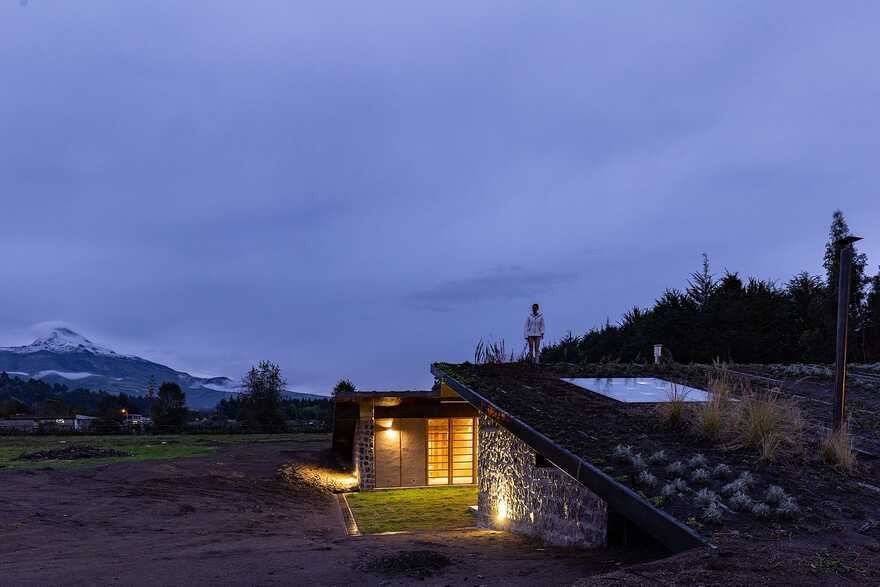 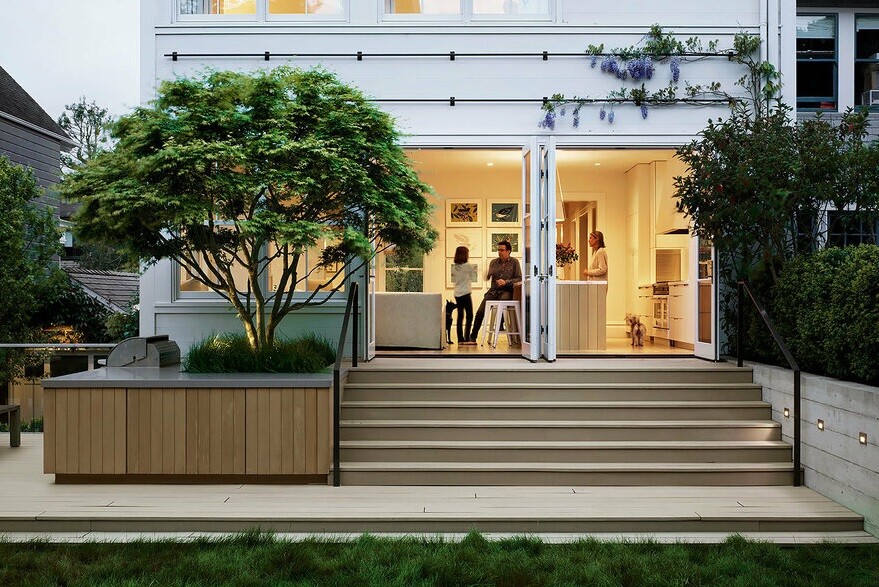 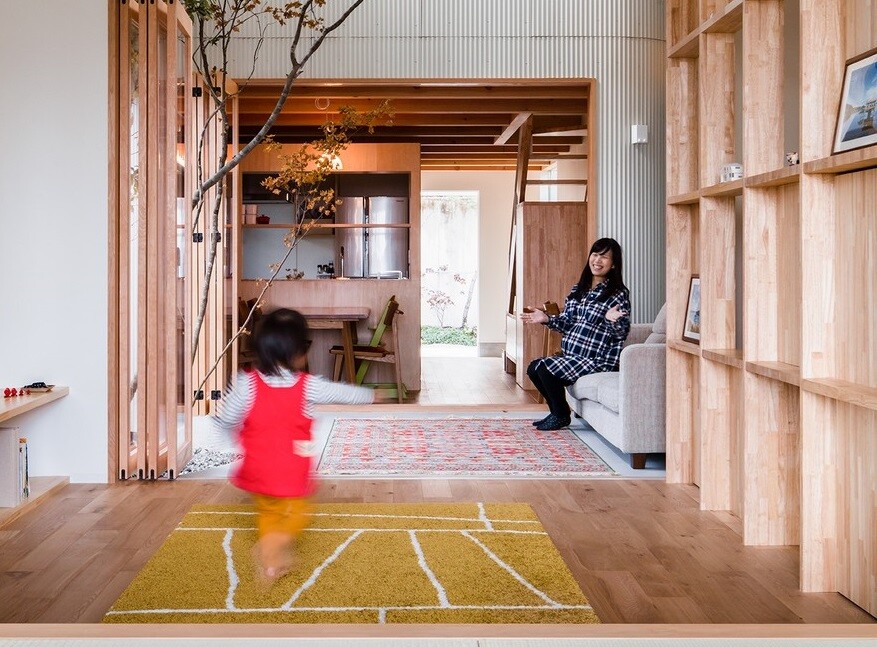 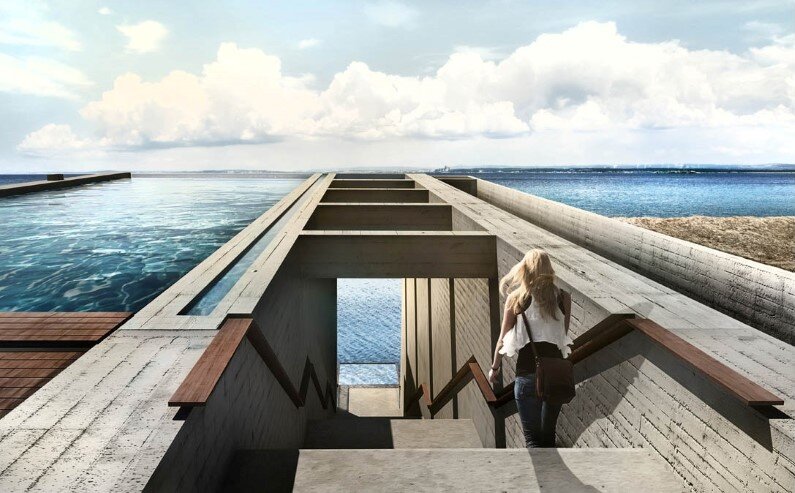 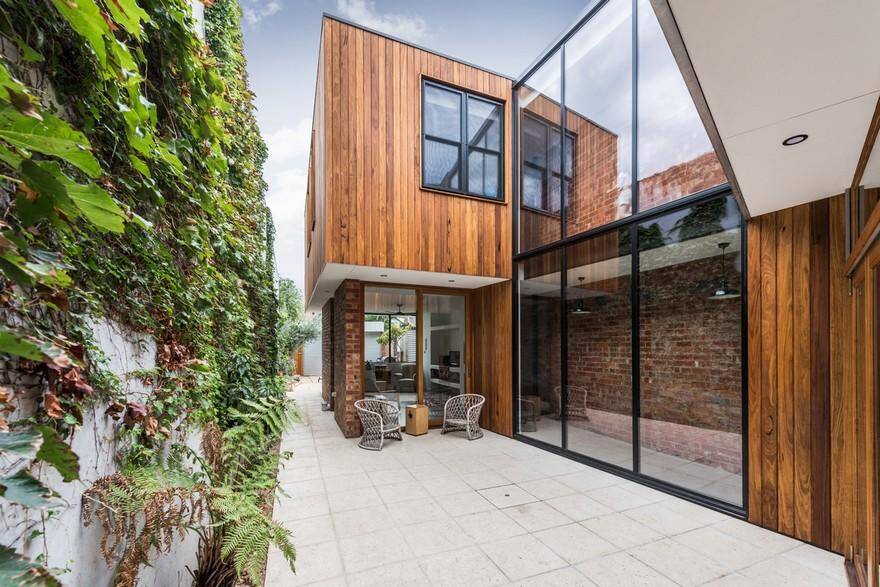 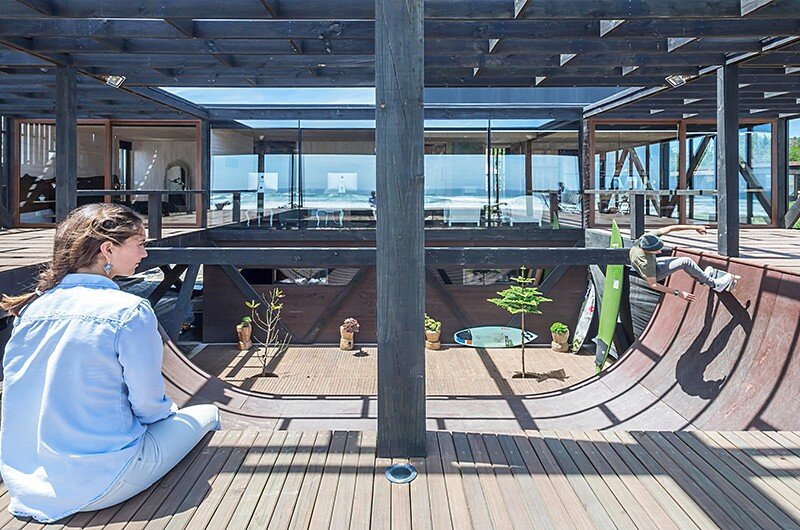