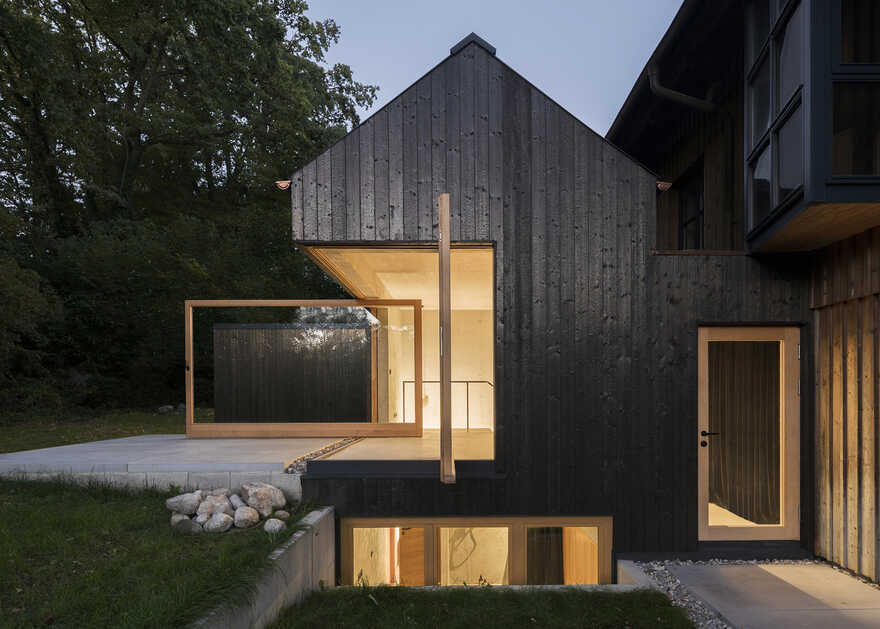 Rural areas in Germany are often characterized by urban sprawl, faceless villages and generic detached houses. This is especially the case for the eastern shore of Lake Ammersee, which lies inside Munich metropolitan region. A contrast is formed by a small black house that stands out from its surroundings solely on account of its carbonized facade. Unlike typical detached homes it is located between two existing houses an office building and a multifamily home. And although it directly adjoins the latter it does consciously distinguish itself from its setting, so that it is perceived as an independent building. In this manner, a further element is added to the existing heterogeneous ensemble. 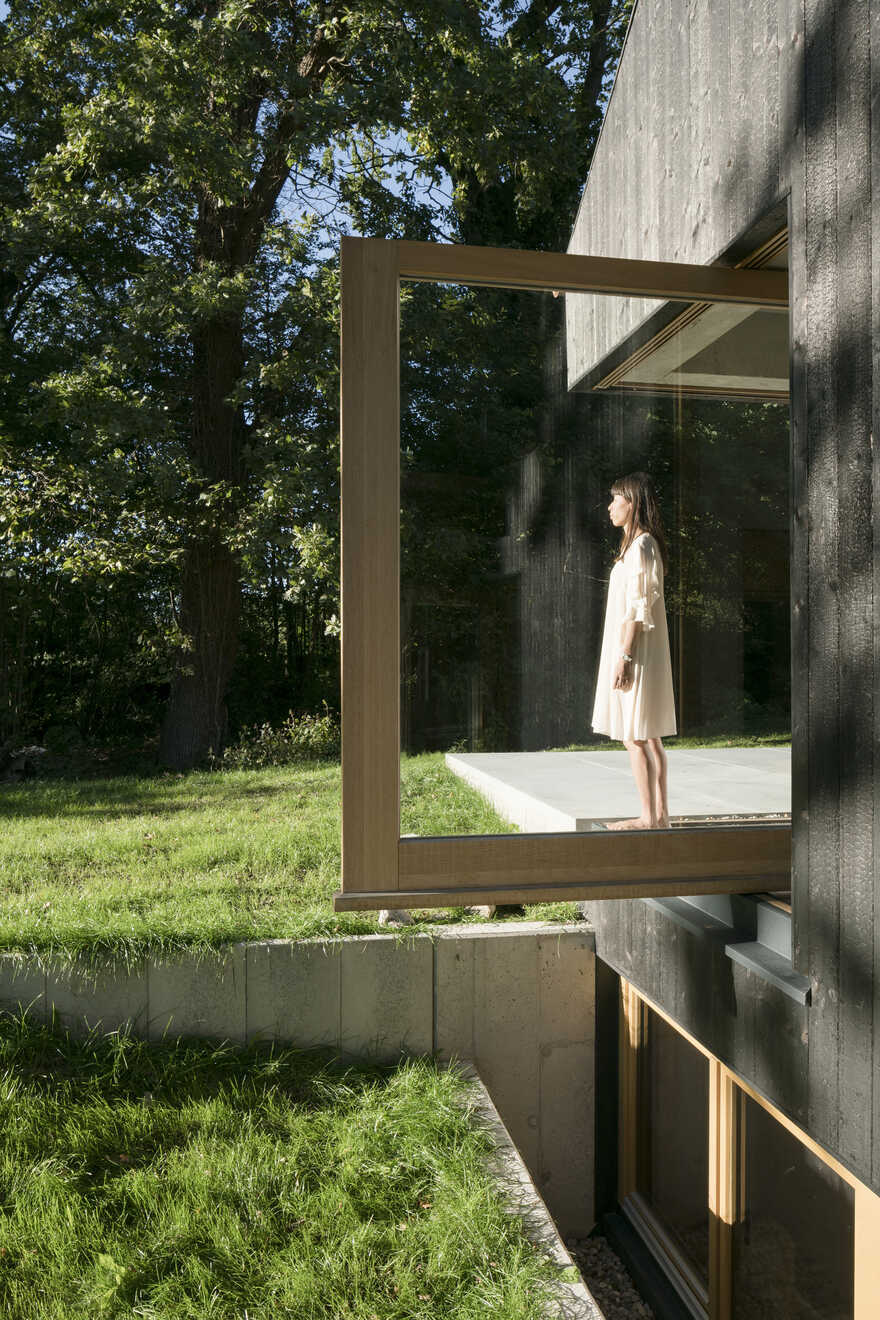 What particularly makes the quality of the building is the way the topography of the plot is exploited with rooms of different heights stacked together. From the outside, this is legible in the projections that denote the terrace and basement, but also in the shape of the roof. Inside, spaces and uses form one fluid entity, overlap and consequently create a variety of spatial situations. A large cutout in the concrete structure enables the space to flow outside towards a small forest with a little stream and help blur the border between inside and outside. 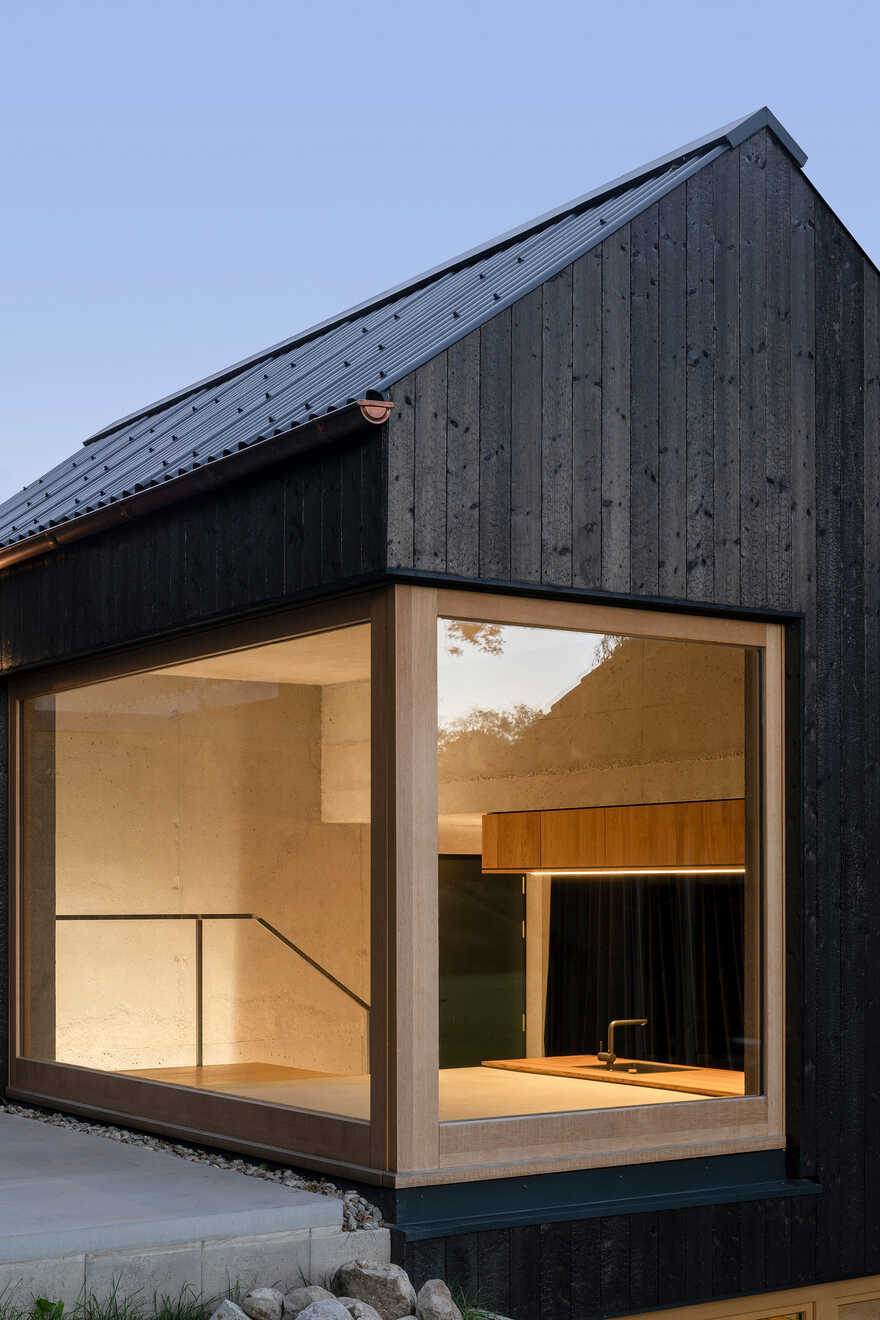 The spatial allocation is reduced to a kitchen with a living and dining section on the ground floor and a bedroom with an open bathroom in the basement. While the entry area with the kitchen are on a level with the attached multifamily house, the floor of the raised dining area is aligned to the plot at ground level and extends through the large opening out towards the terrace. Specifically, two pivot windows allow the north and the west facade to be almost completely opened with a freecantilever. 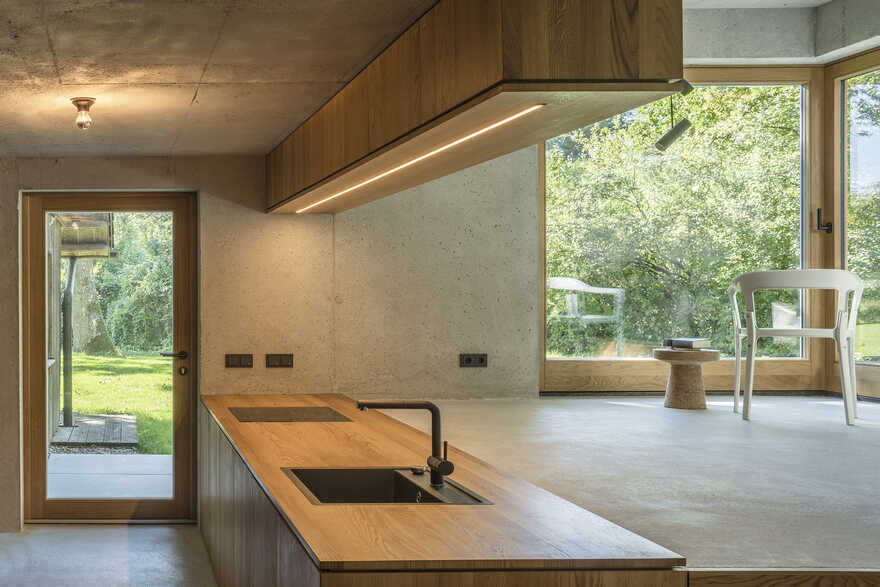 Similarly, the projection of the building can also be seen in the shape of the roof; the building has a flat roof that adjoins the apartment building, while a saddle roof tops the mezzanine floor. 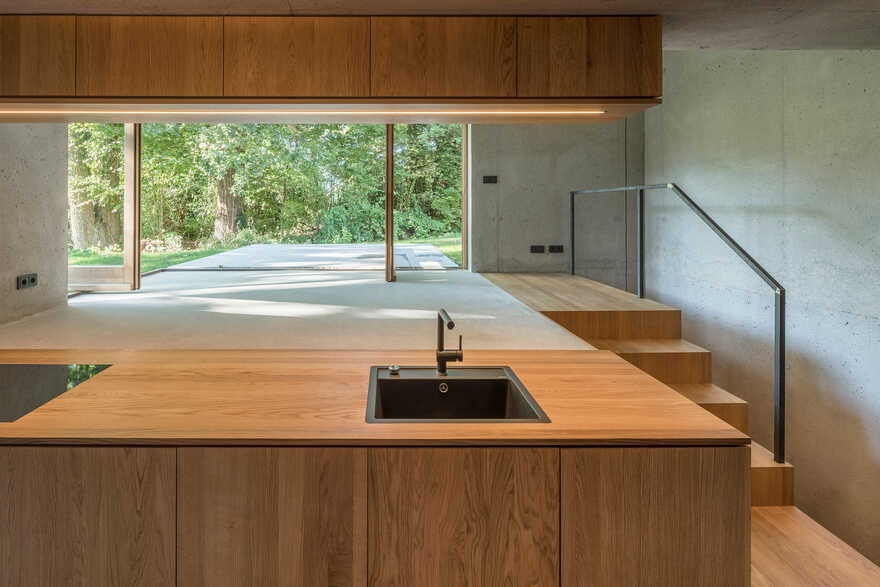 The shapes and materials chosen for the interior are unobtrusive. All the fittings such as kitchen, cupboards, doors and windows, but also the stairs are made of untreated, oiled oak. The panel heating system is integrated into the concrete ceilings, floors and walls, which all act as thermal energy storage. Simultaneously, this meant the floor and ceiling slabs required no further elaborate finishing. Instead these surfaces were sanded down to make the stone pattern more visible. The fair-face concrete walls and ceiling areas have been sandblasted. The architectural concept avoids any chemical treatment. Instead, the wooden façade has been sealed by being carbonized. The wooden boards are as a result both water-repellant and resistant to fungus. The house plays with aspects such as inside and outside, top and bottom, and due to its shape and the sparing use of materials it has a purist and clear feel. 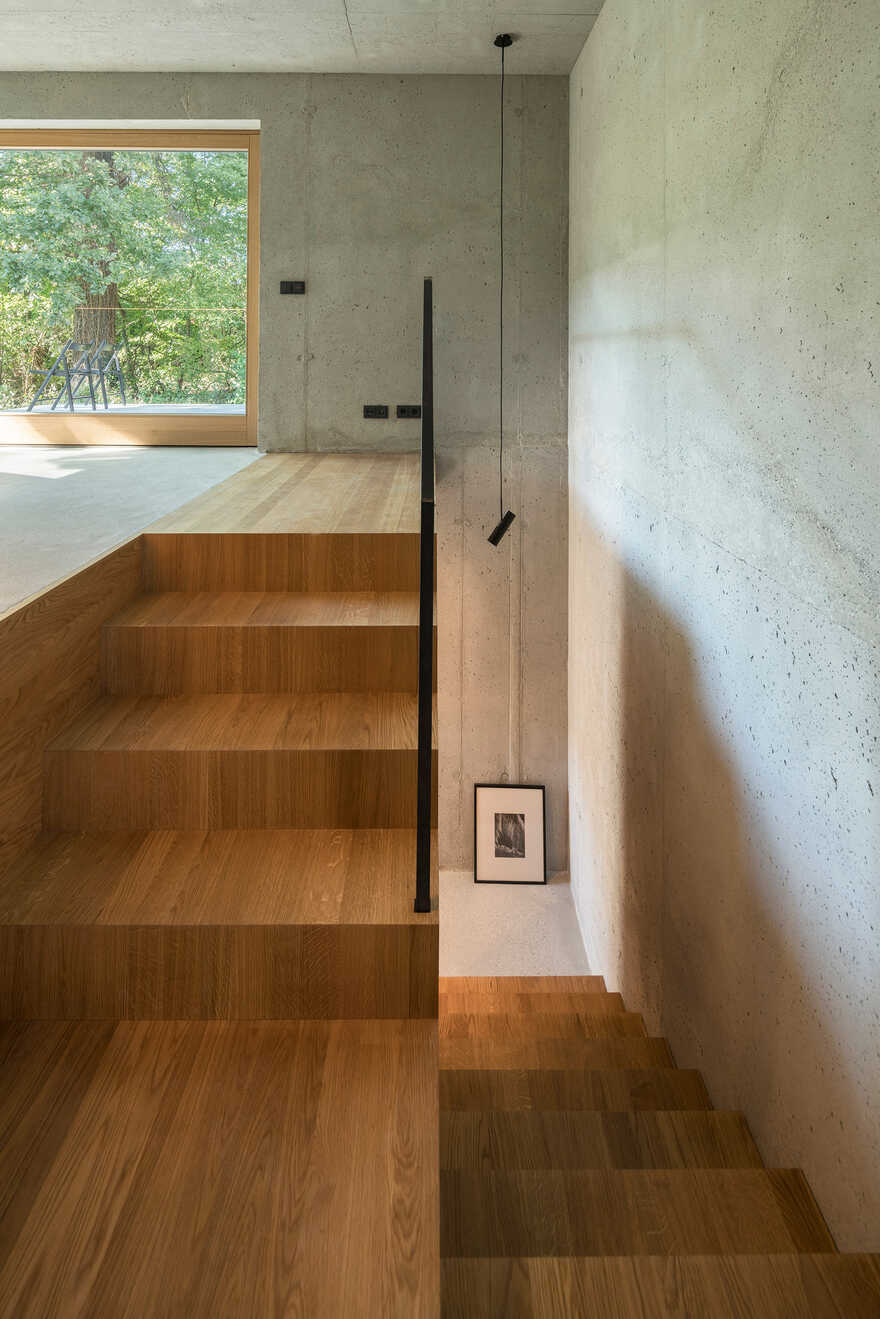 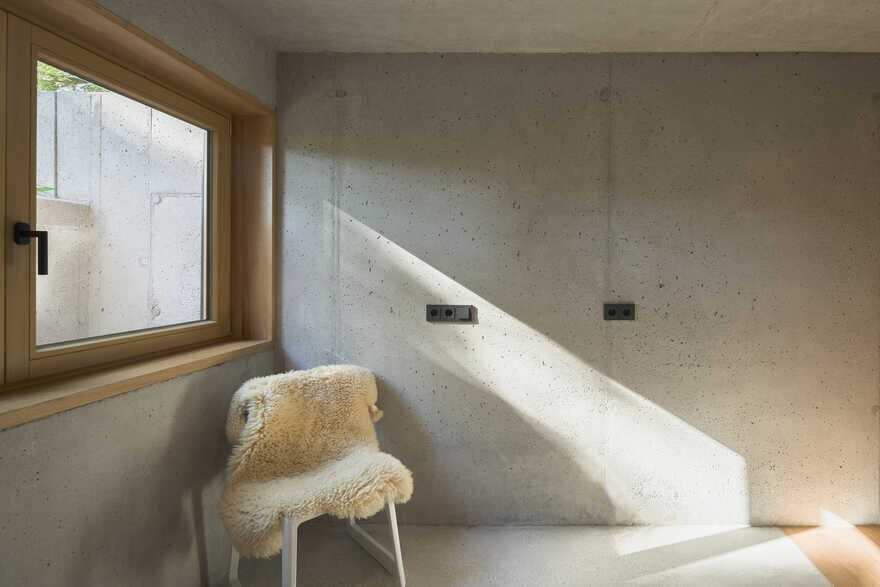 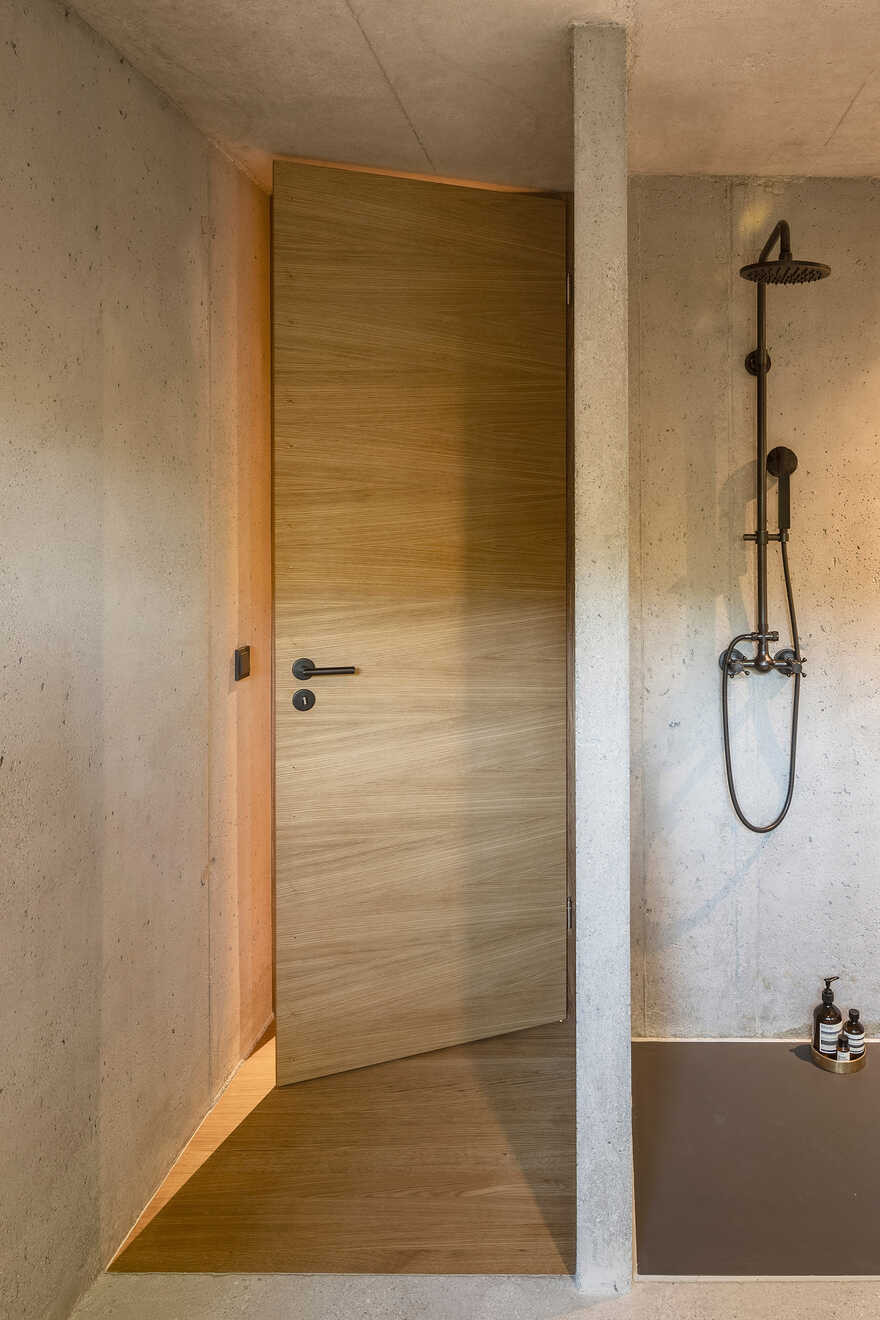 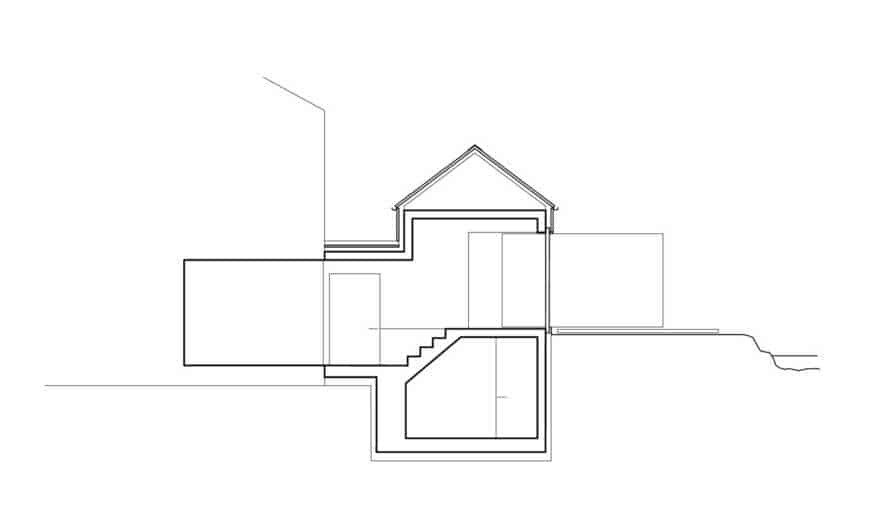 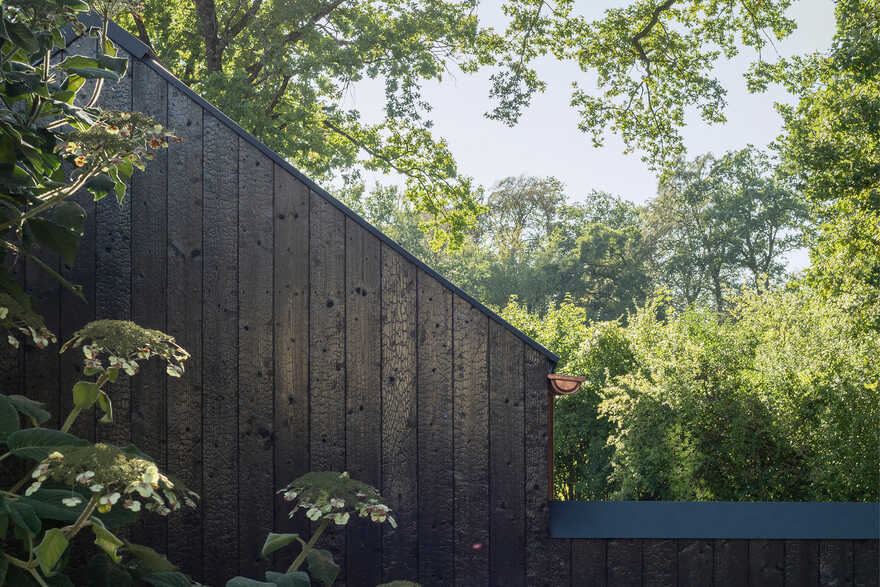 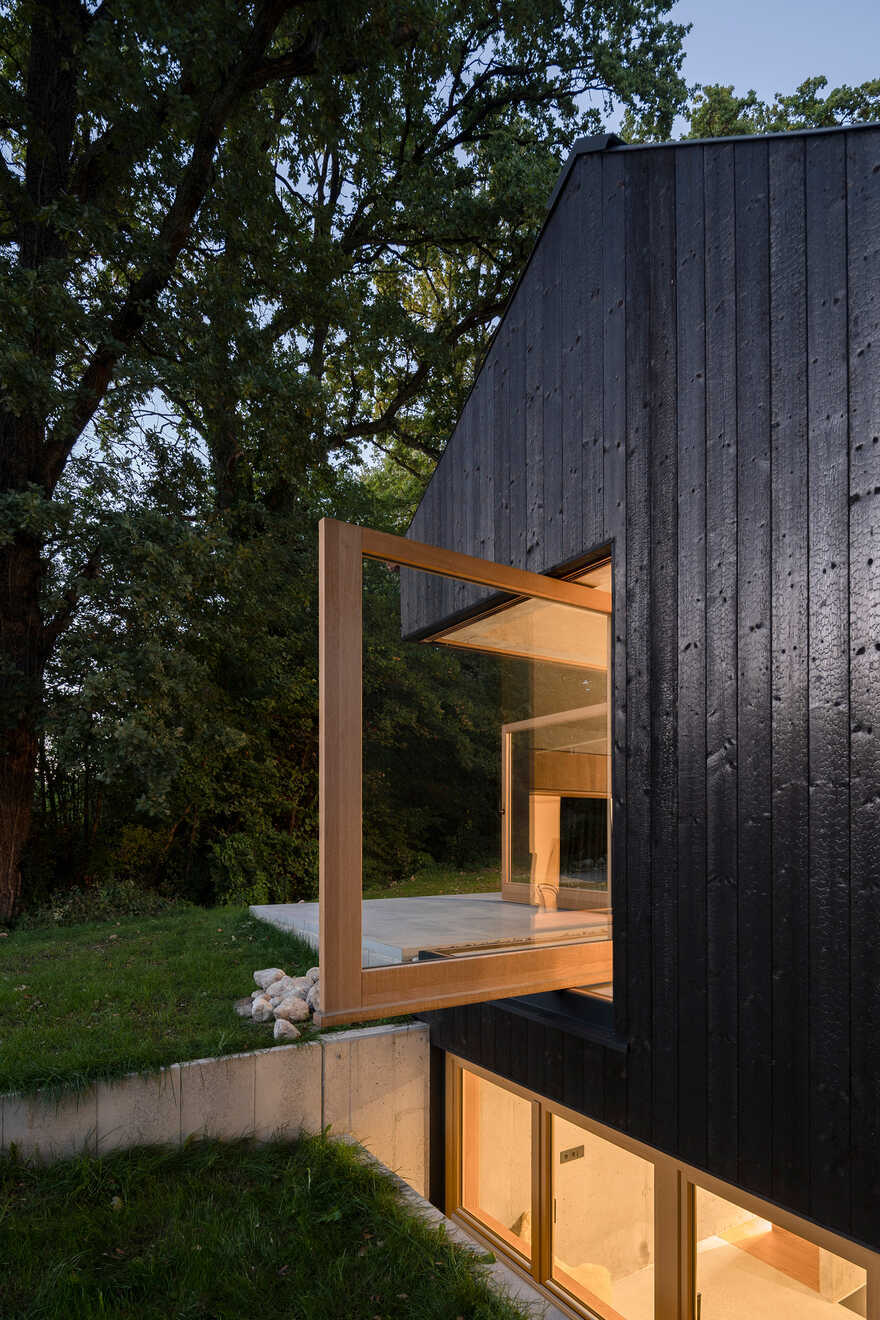 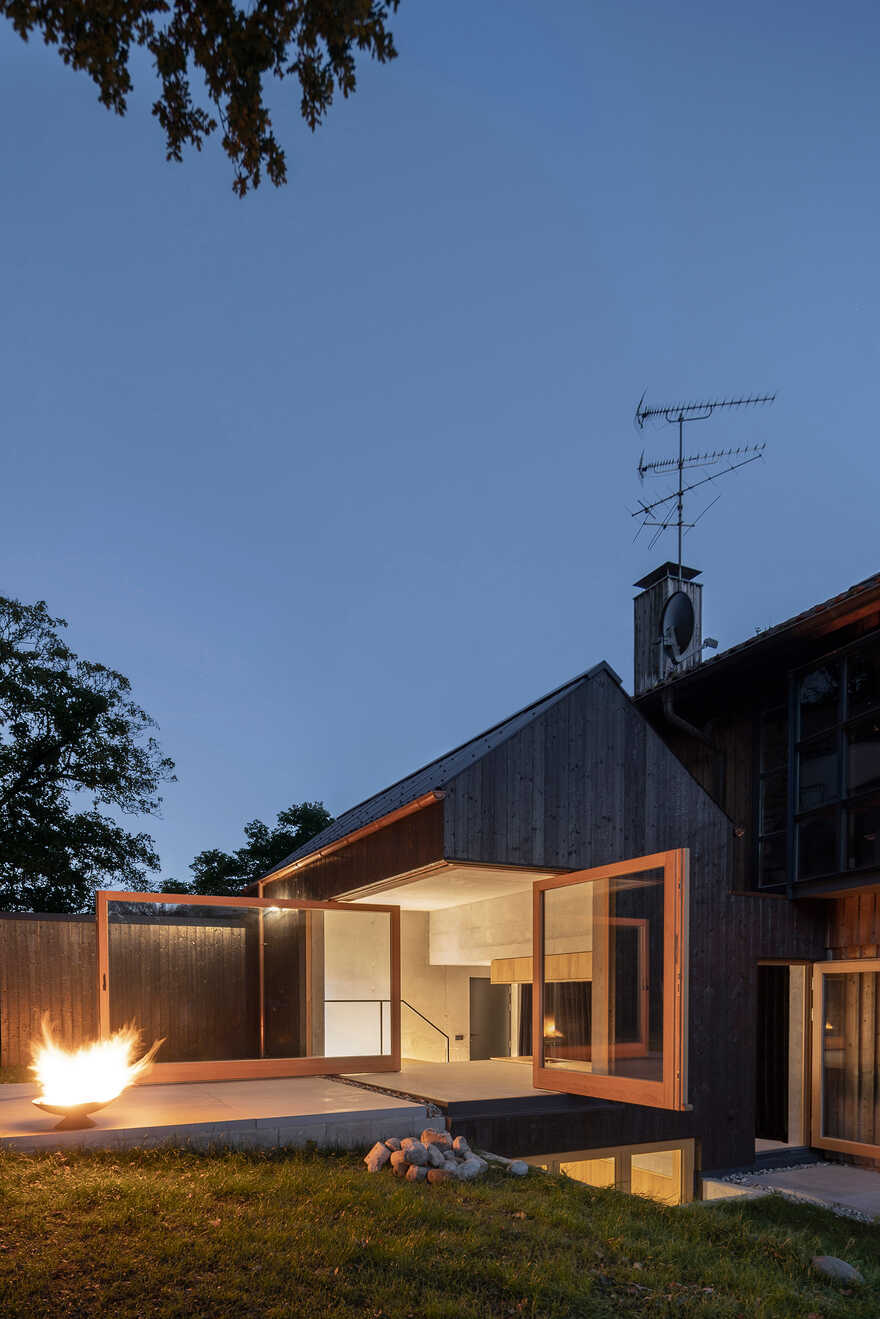 Restaurant and Hotel in Pottery Factory Montalván in Triana, Seville

The project began with a detailed research of the property. As a result of it, all the pottery that was left on the old Montalván Factory’ shelves (today Restaurant and hotel) has been recycled to create a unique contemporary architecture ...
Read more

Our Corrie house project combines the old and new in an outstanding location on the shore of Loch Torridon. The core of the project is formed from the remains of a former church building
Read more

Floating House is a single family house designed by Arno Matis Architecture. The house is located in Kerrisdale, Vancouver, Canada. This house is a...
Read more

A Traditional 1950s House Has Been Updated for a Modern Lifestyle

Hibou House was designed for a young family that values connection – both with one another and with their friends and neighbours. The renovation thoughtfully updates an existing traditional 1950’s house for a more modern lifestyle – one that feels relaxed and comfortable yet easily adapted for entertaining.
Read more
Contemporary Houses

Our Light Saw House represents a contemporary, design-based solution to sustainable architecture. Built upon an existing double fronted Edwardian weatherboard, our clients sought a local architectural response to a property they had owned for some time, but not lived in for 15 years whilst overseas.
Read more
Contemporary Houses

Madreselva House is a family residence built on the coastal town of Salinas, Asturias, on a small trapezoid- shaped lot located between two different residential zones, a townhouse complex and a single-family residence.
Read more