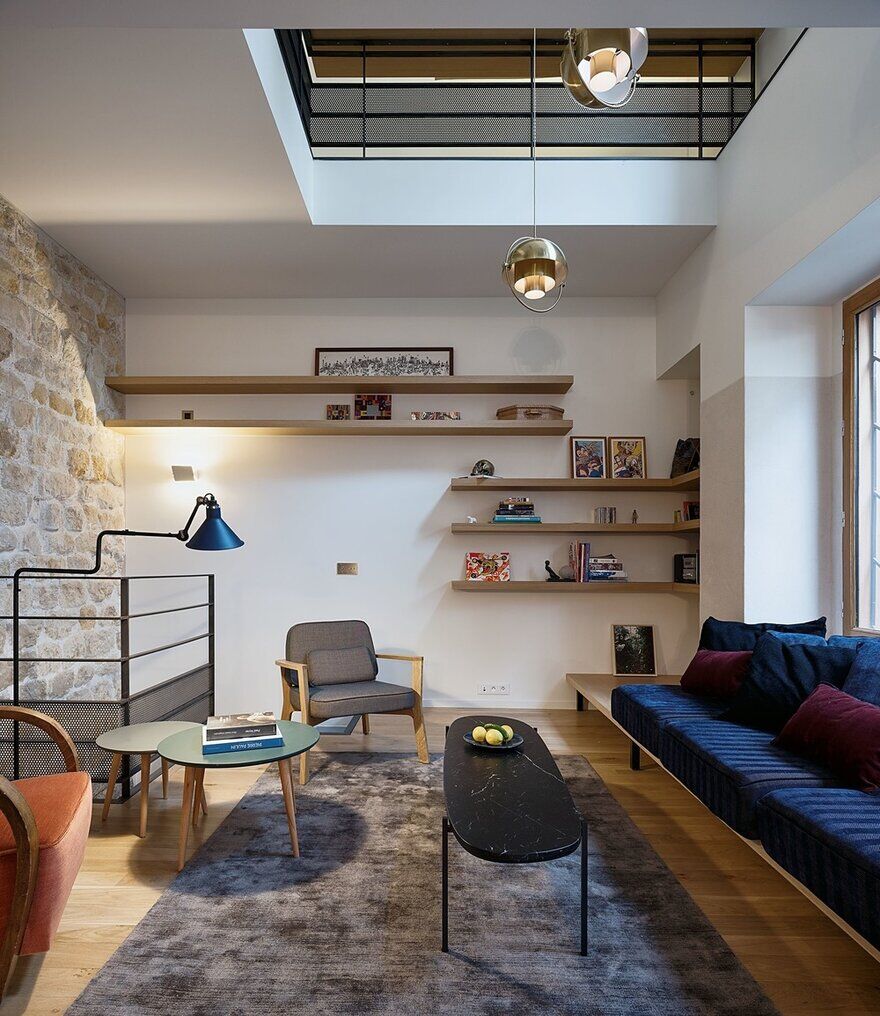 This small unhealthy building tucked away in the back of a courtyard in Paris 10th district formerly housed small, dark apartments over two levels that were unsuitable for living in. “Given the presence of house fungus (mushrooms that had attacked all the building’s wooden structure) in particular, we had to entirely recreate the building, only keeping the outer building envelope, which was remodeled as well,” the architects, Alia Bengana and Capucine de Cointet, point out. 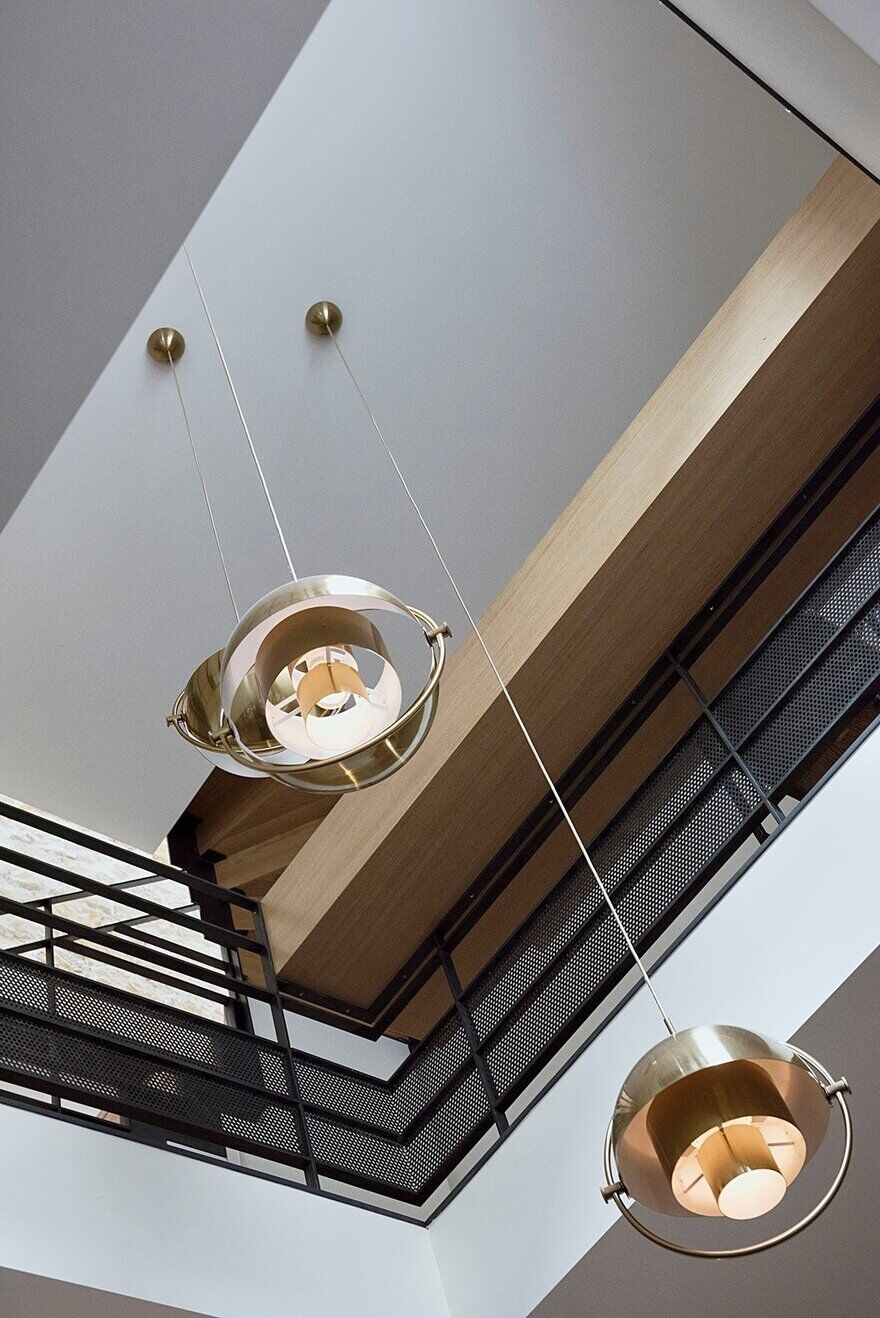 In the owners’ specifications were making the place fit for a family while managing the construction and the site in the most environmentally friendly way possible. Begun in May 2016, the construction took 8 months and cost 400,000 euros, interior and exterior work combined. The small building became a comfortable 120-m² family home spread over 4 levels. In addition to the ground floor and first and second floors, 38 m² of vaulted basements are now home to the laundry room and a multi-purpose space that can be used as a game room or home cinema. 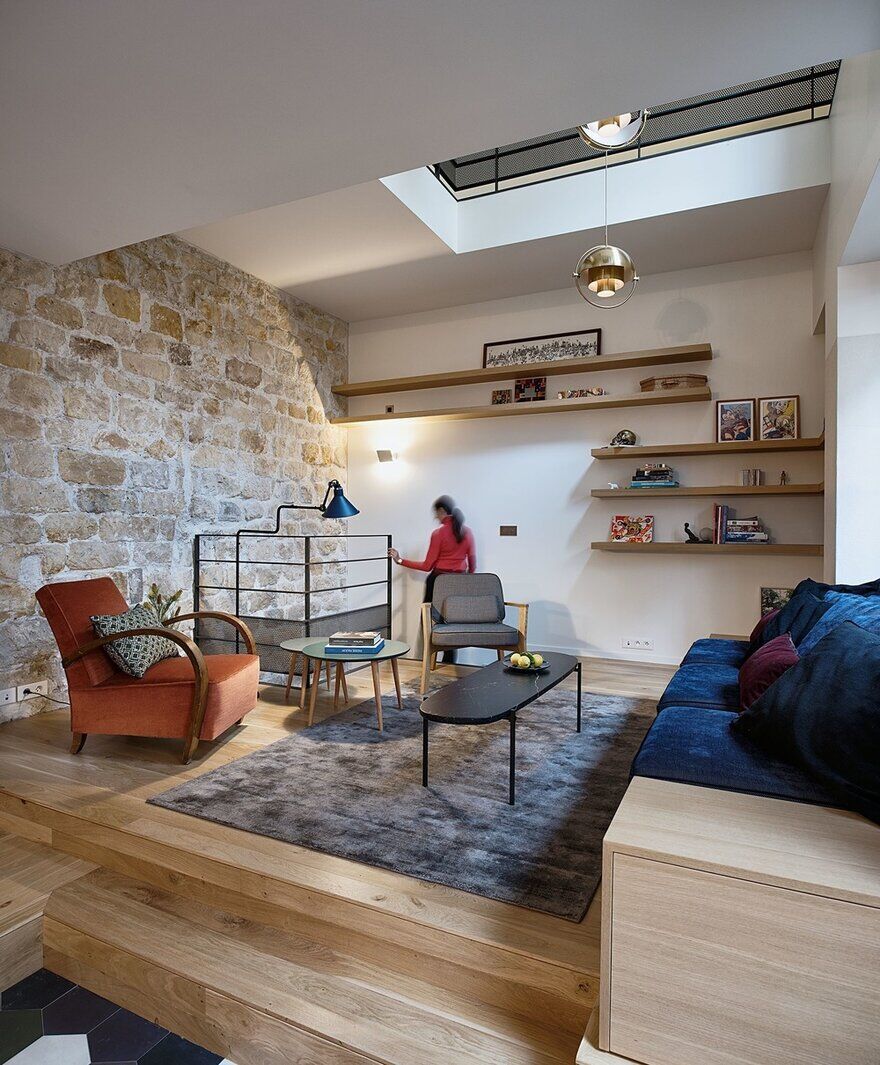 “Our main focus was letting as much light as possible in the house while still maintaining the privacy of the residents,” the architects explain. “This is a typical Parisian apartment with a small courtyard where the neighbors are never far away. ”Certain levels were thus opened with half-height floors in order to capture as much light from the south as possible. As for the large staircase, located opposite the façade, it is crowned with a glass roof, allowing for the whole staircase to be lit up and bringing light to the ground floor. And because the spaces are restricted to one exposure (except for the skylights), the architects used glass walls inside, such as in the master bedroom. “It diffuses light while allowing the parents to keep an eye on their kids,” the architects explain. 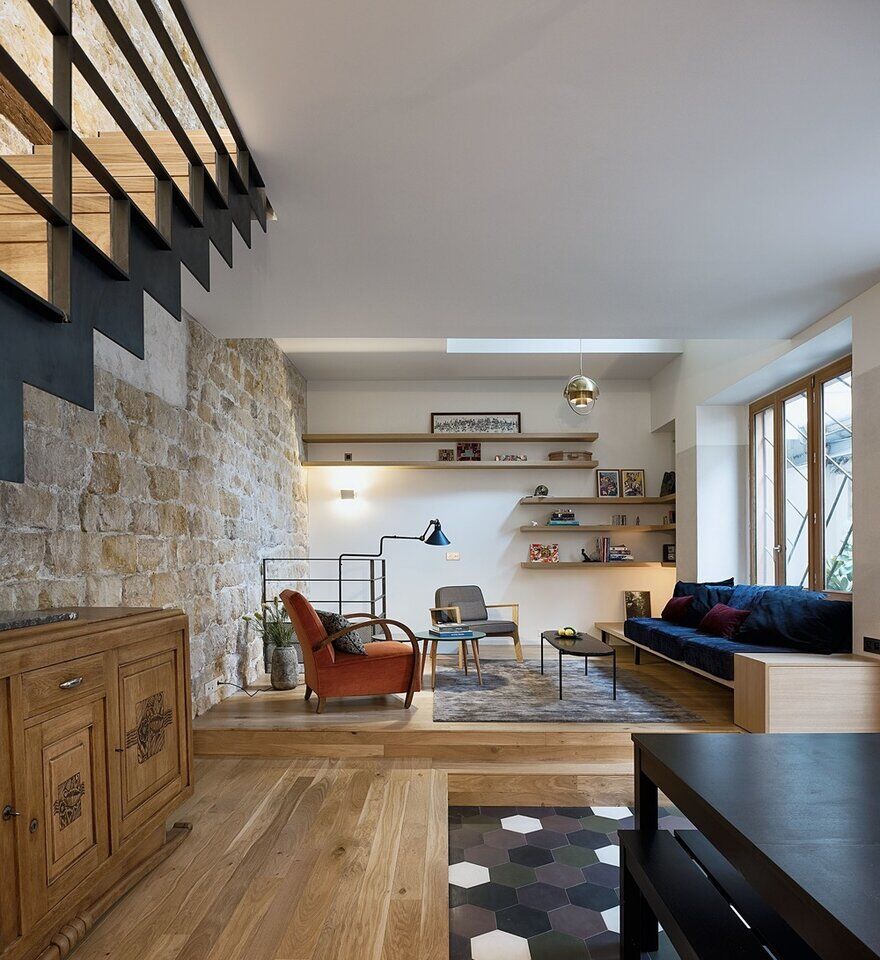 The emphasis was on using raw, simple materials. From the larch for the windows to the solid oak for the staircase, not to mention the gritstone wall, which was entirely uncovered, and the raw metal for the railings and the glass elements, used to highlight its finesse and look. “We kept the wall in its patchwork state with its different additions and multiple materials. It’s a witness to the history of this building,” the architects say. In the bathrooms and the kitchen, the same hexagonal tiles can be found, but each room has its own color scheme. The same goes for the railings and the outside metal protections, where diagonal lines soften the horizontal and vertical ones. 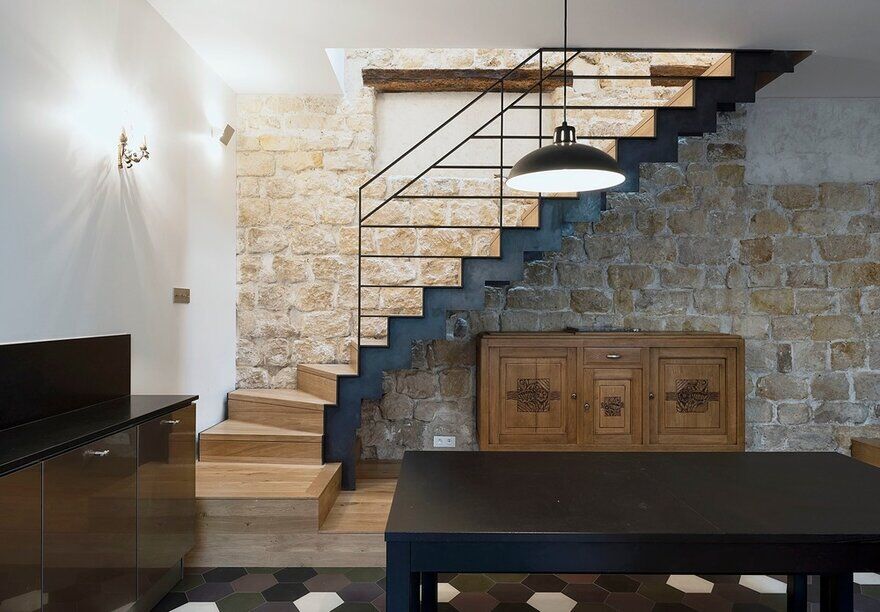 As for environmental performance, the building was insulated from the outside in order not to remove any living space. Recreating the floors allowed for the easy installation of ducts for heat recovery ventilation. Finally, planters were buried in order to provide enough soil to allow plants to grow that will cover the façade along the wires strung up to the top of the building. 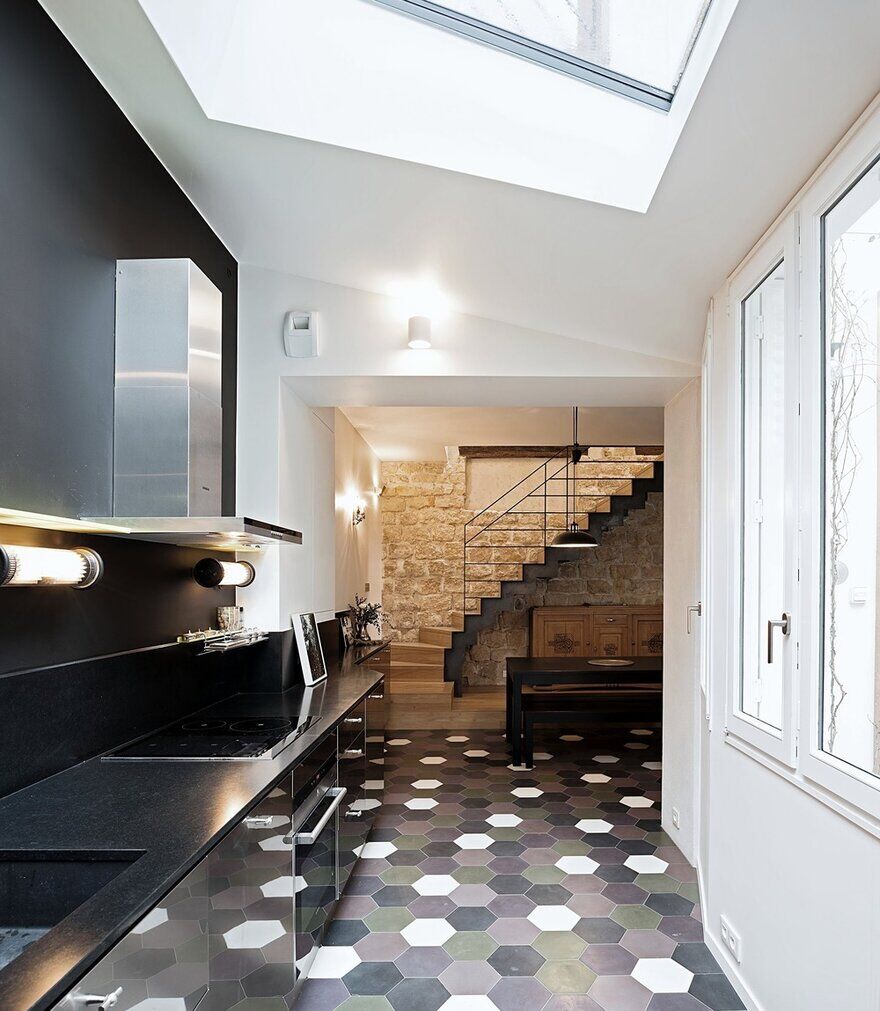 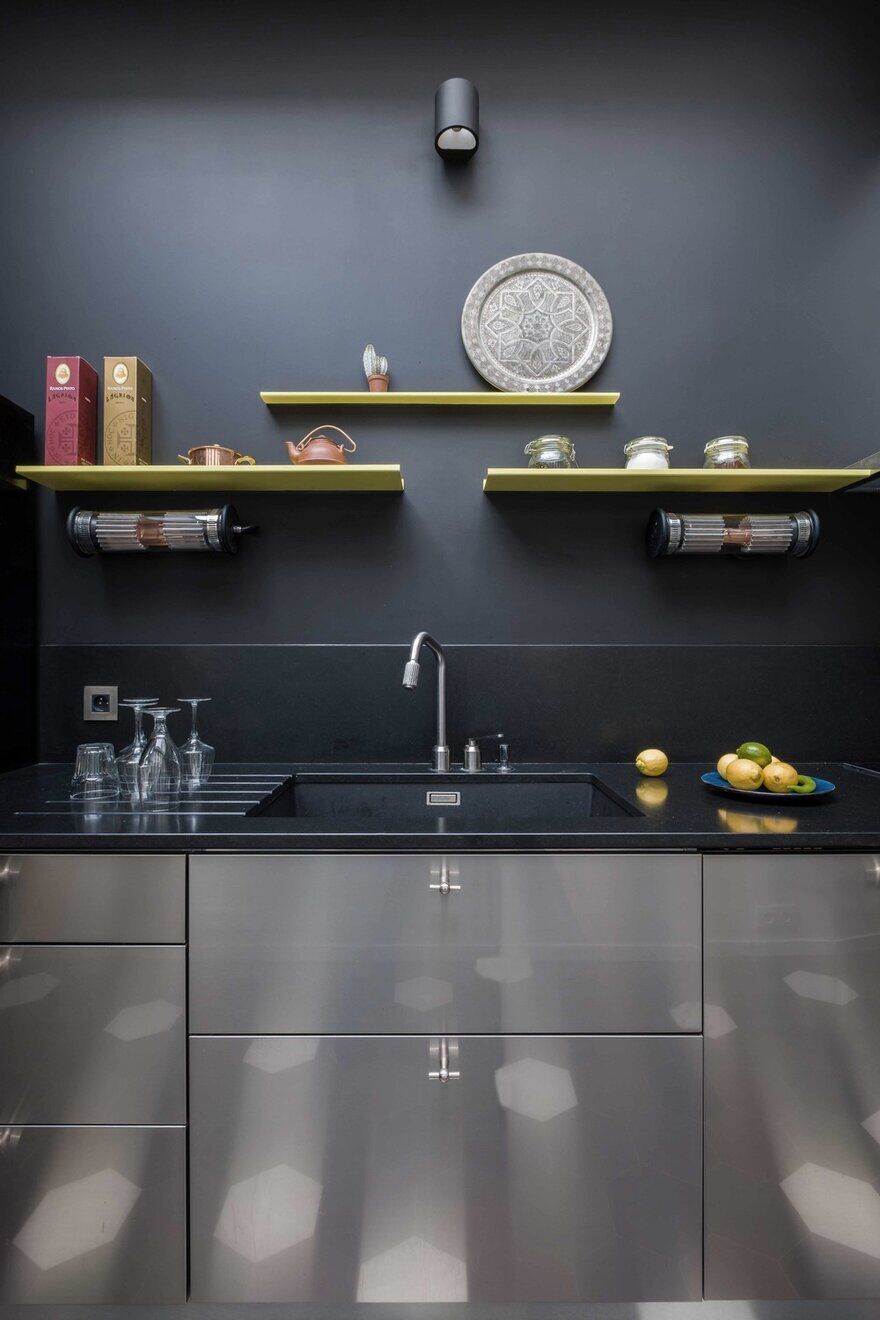 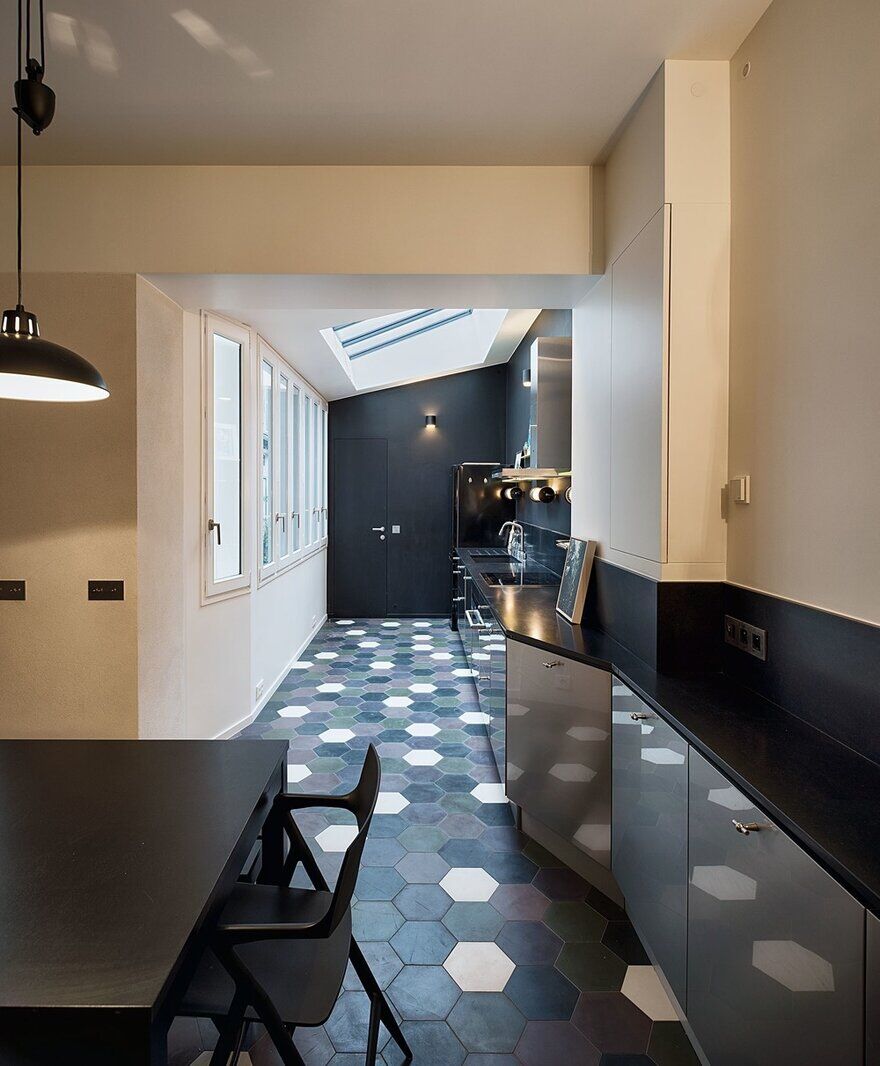 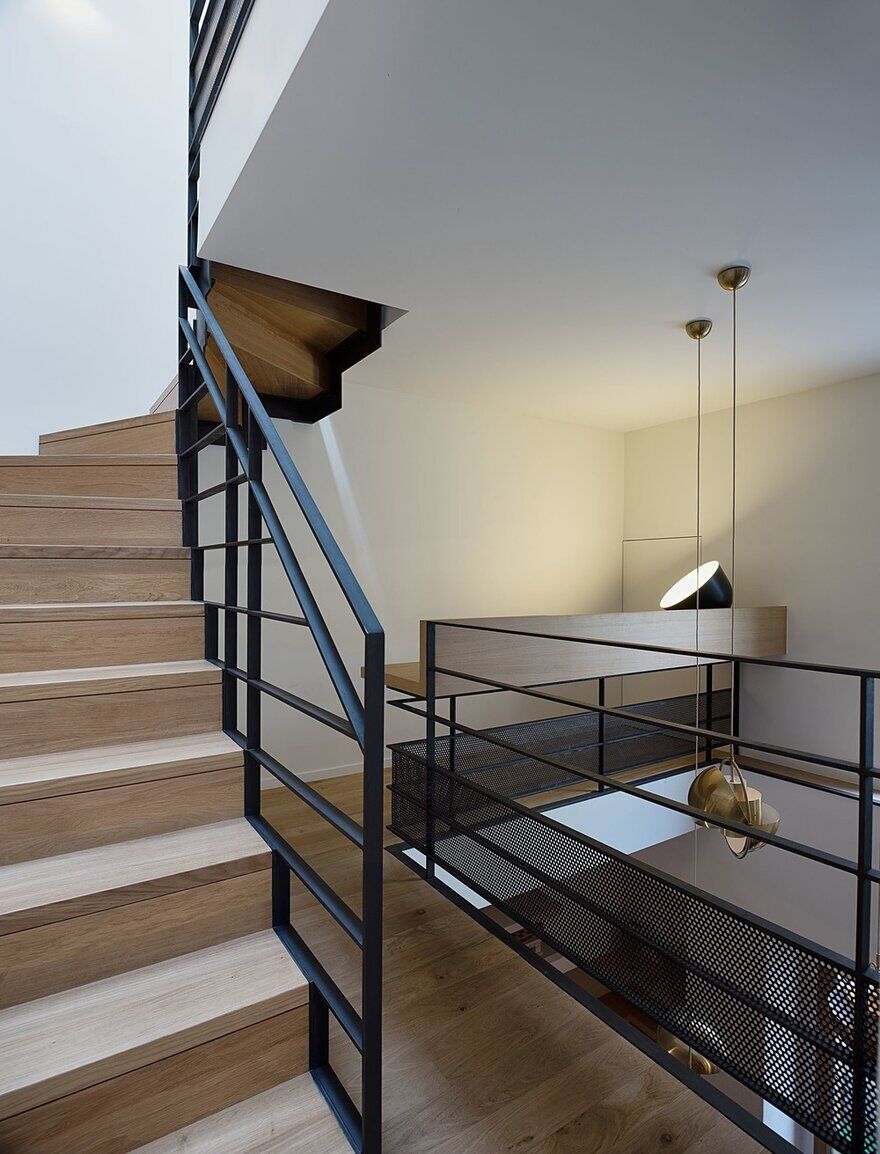 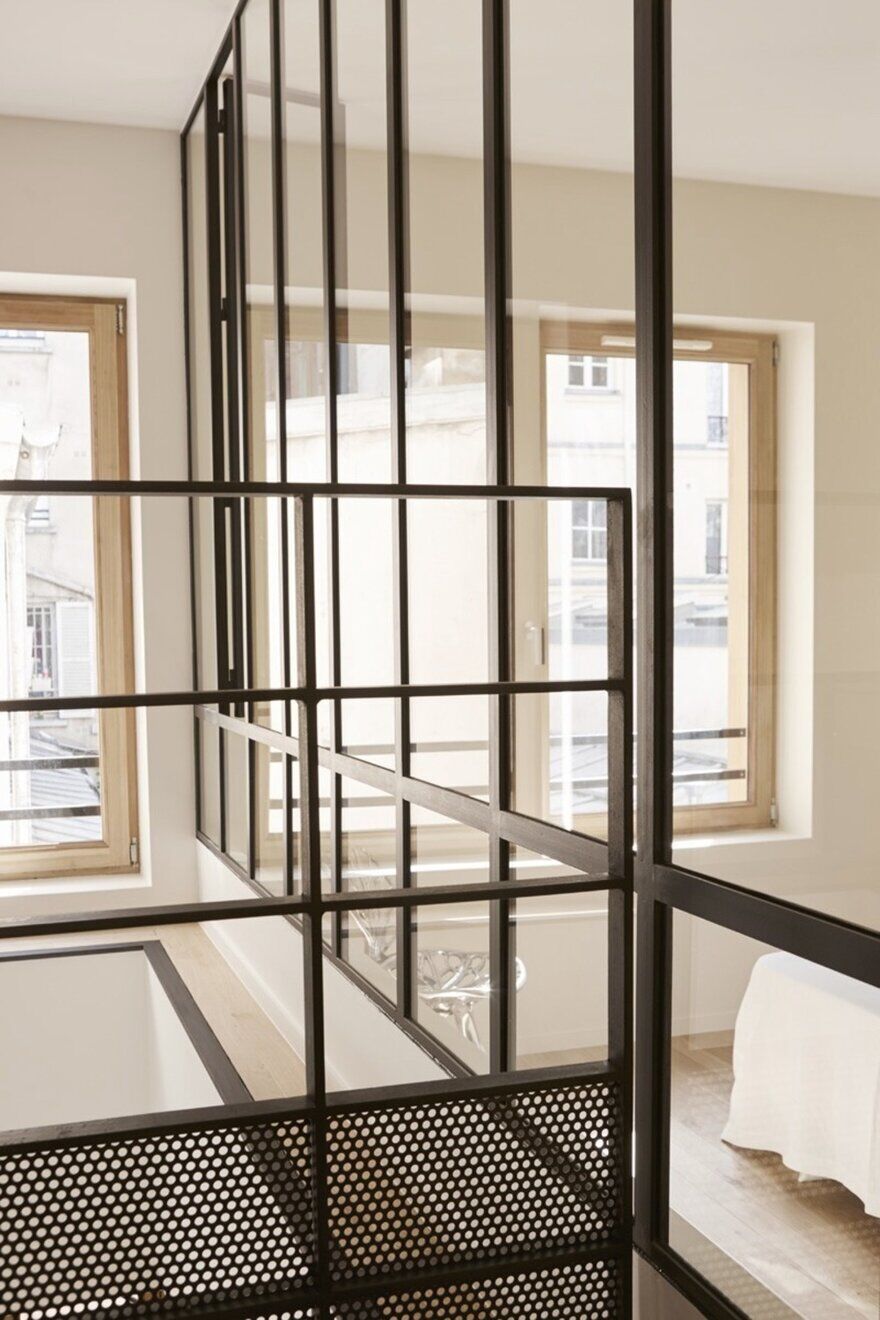 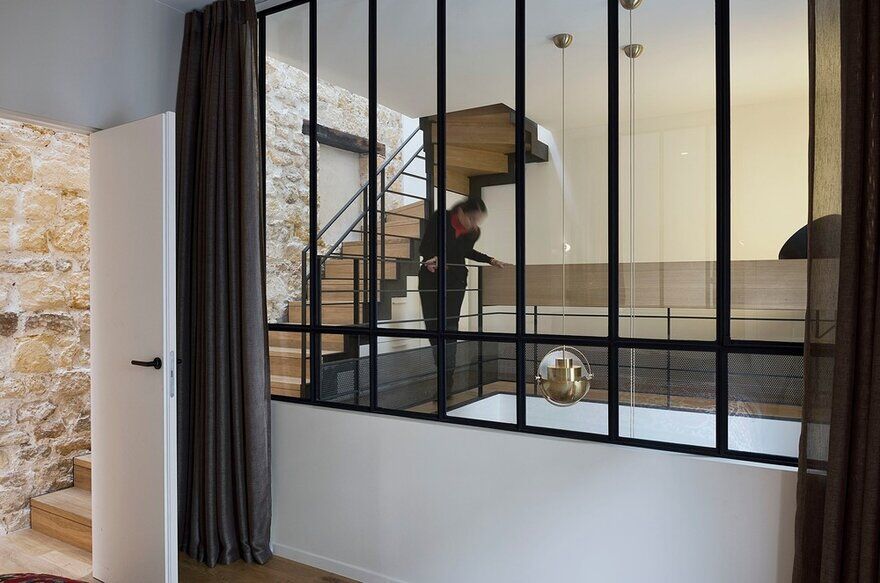 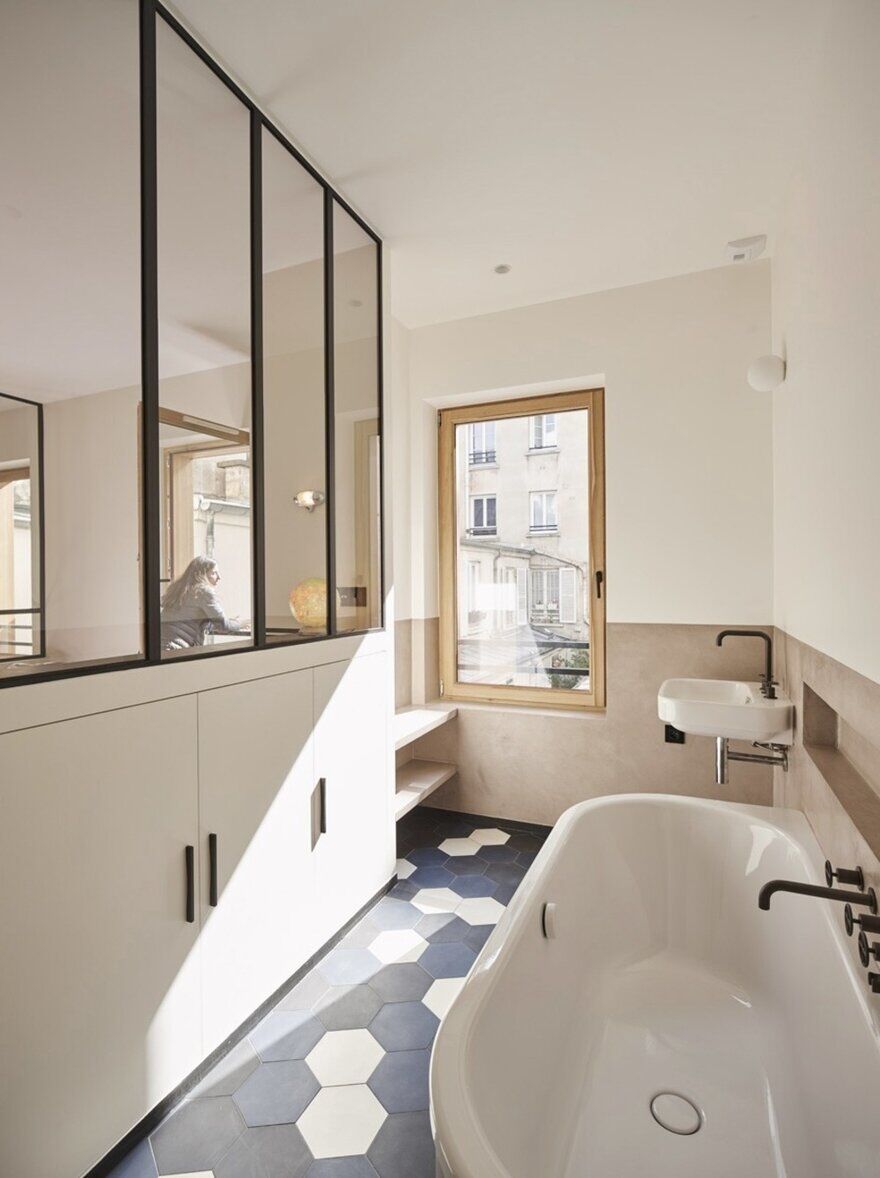 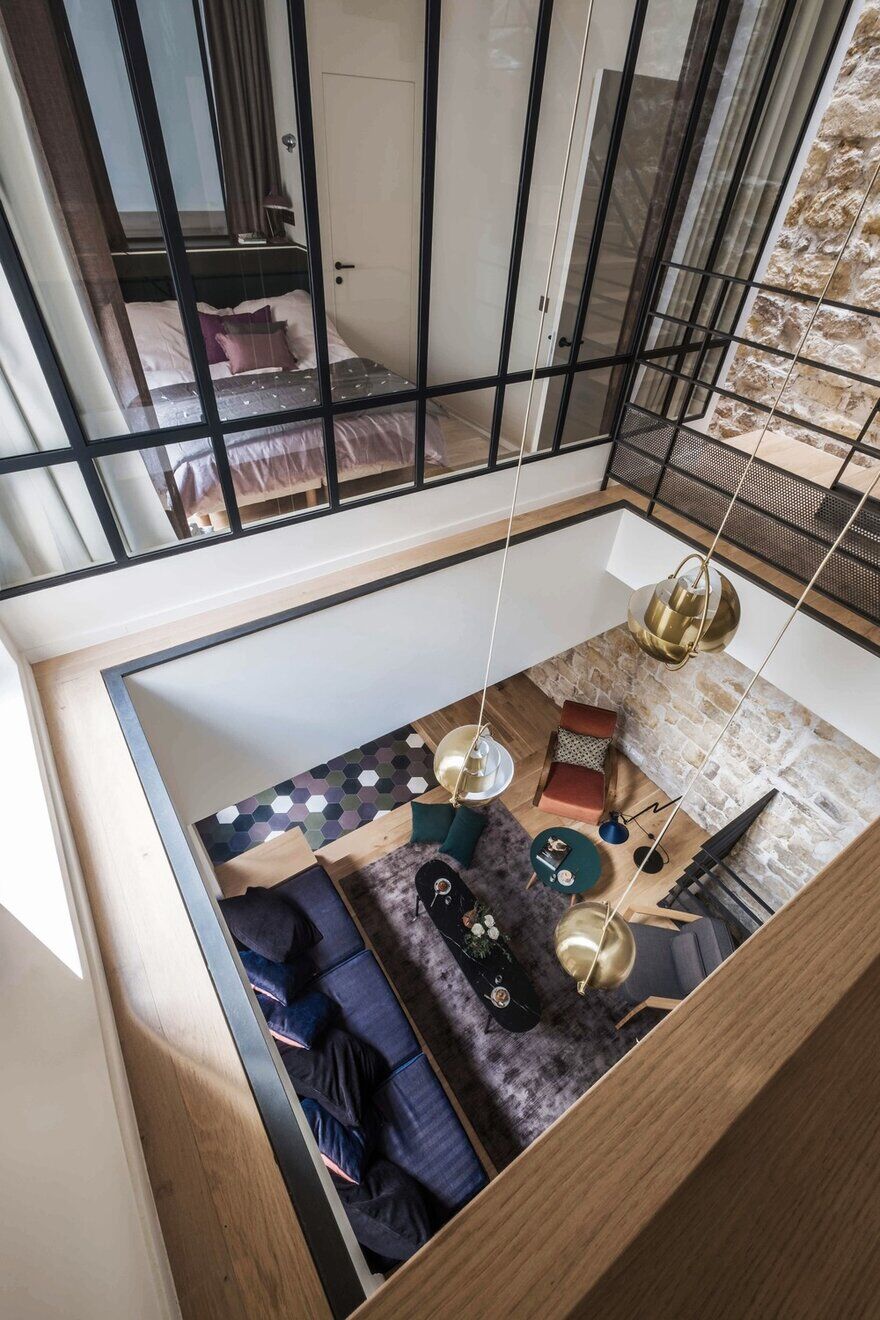 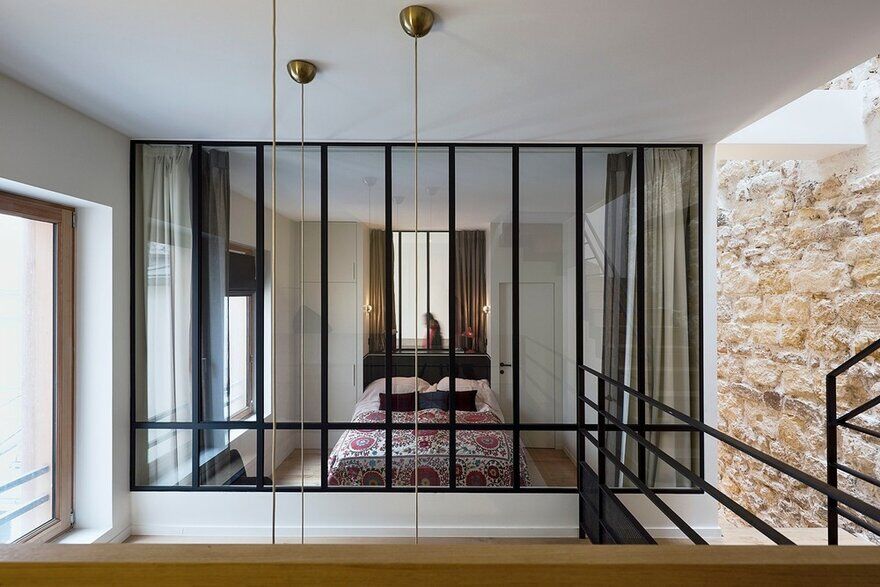 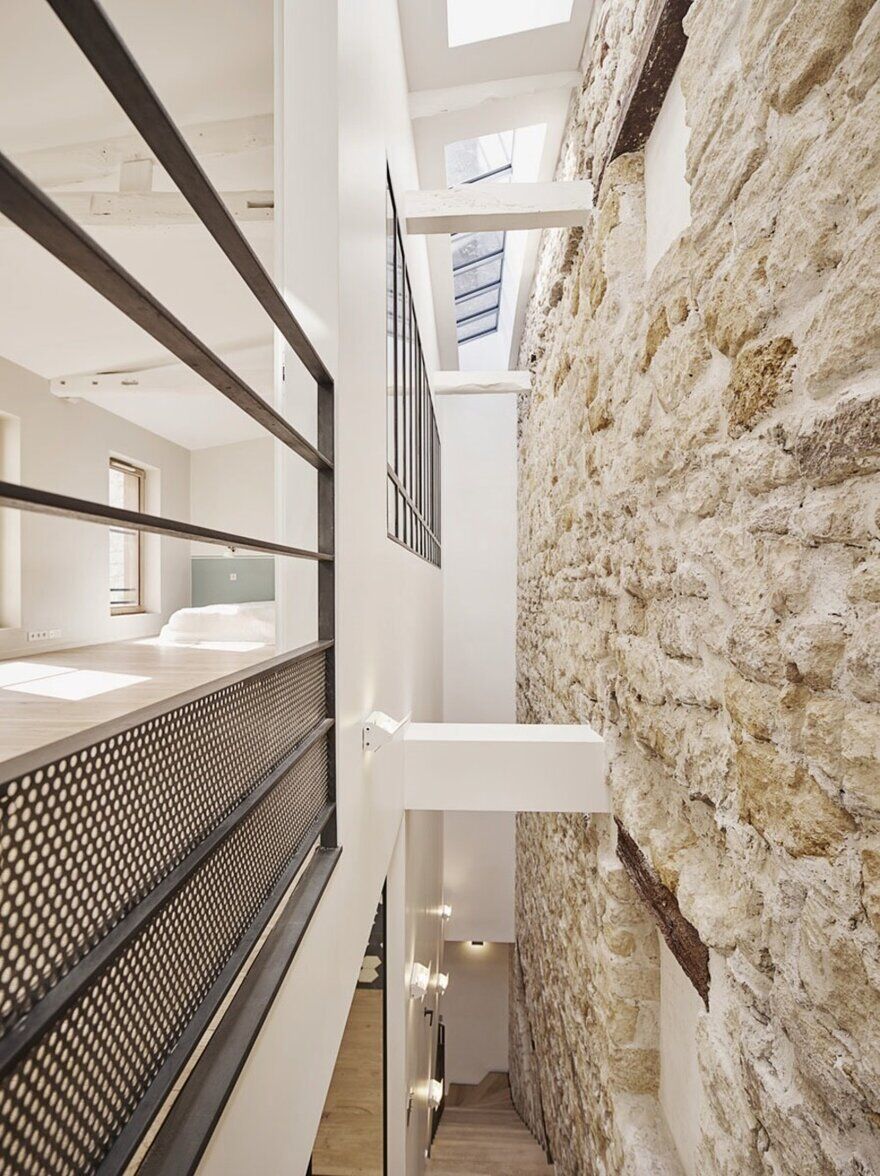 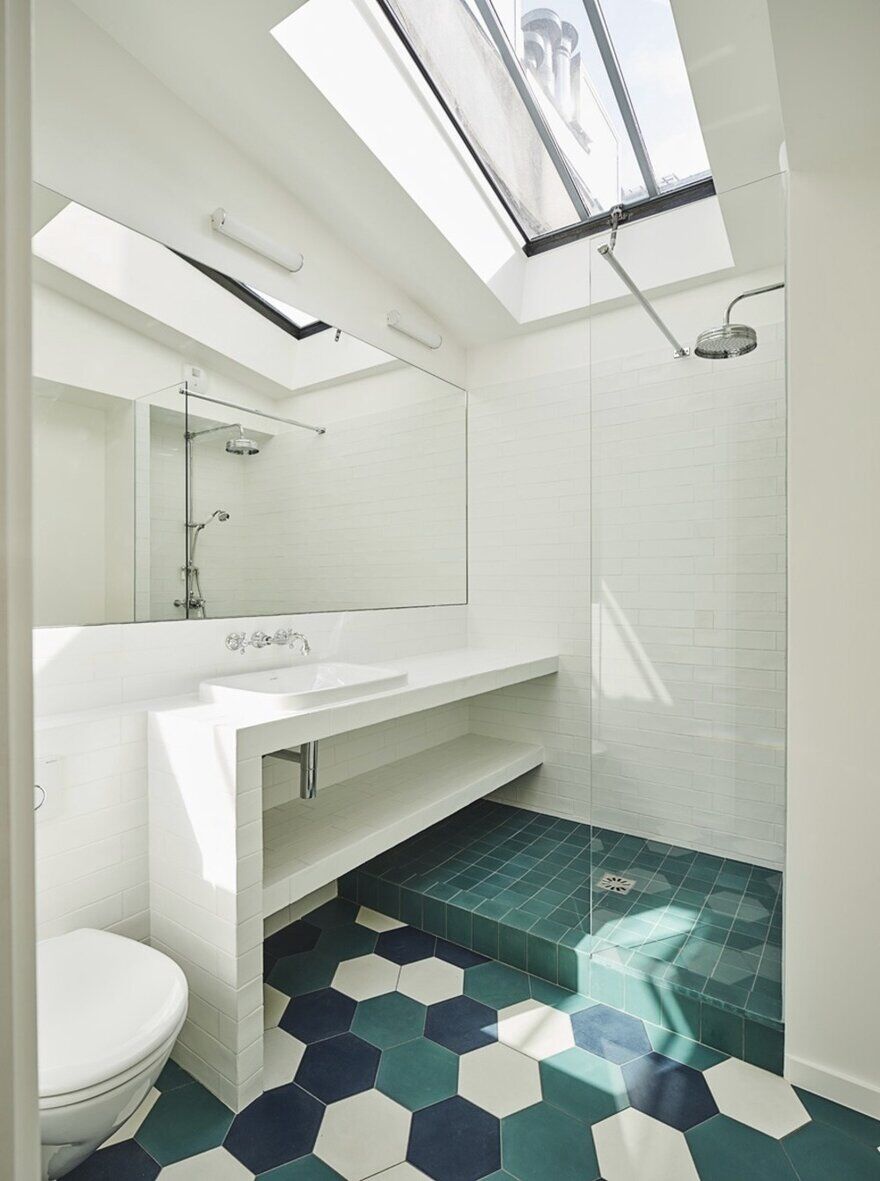 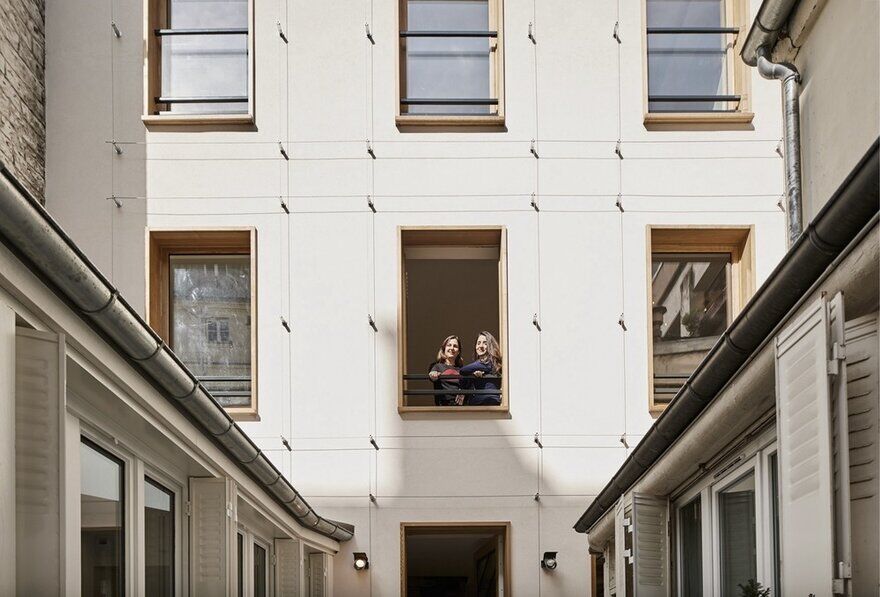 A Substantial Renovation and Update of a Early 1980’s Home

Vigario House is a Dialog Between Old and New / AND-RÉ