Traditionally, row houses tend to be dark rectangular spaces with windows located only on the shorter sides of the building. Stairways are stacked, one above the other, maximizing square footage, but diminishing any visual connection vertically throughout the building. While this typology evolved logically, given the spatial demands of the city and the need to minimize exposure to the elements, technology has since improved, and much of the same aims can be achieved through entirely different means. Additionally, the needs of the modern family are different than those in the 19th century. Privacy is no longer a priority. Instead, a desire for visual connection, both between inhabitants from floor to floor, and from interior to exterior, are desirable.

The Switchback House is a prototype for the new urban family, inverting the traditional row house in two primary ways. One, by replacing a stacked stair with a switchback stair, and two, inserting a dramatic skylight directly above the new vertical stair volume. This subtle but strategic transformation provides natural light throughout the house, illuminating each level, and eliminating the need for artificial lighting during the day. Additionally, the efficiency of the switchback design eliminates the typical hallway that, in the past, linked stacked stairs, and instead replaces it with a void, permitting adjacent rooms visual access to the light filtering down from above.

The existing house – in the middle of a brownstone block in Bedford-Stuyvesant – was rundown and dilapidated, with much of the historic interior detailing removed or destroyed. The original layout had been reworked over the years into a rooming house with multiple small apartments, eroding the original grandeur of the space. Most of the existing infrastructure – from plumbing and electrical on up – needed to be fully replaced. “This was an opportunity to try something new – to rethink what a townhouse in the city could be,” architect Shane Neufeld commented.

Neufeld’s clever addition of a fourteen by six foot skylight, oriented due North/South along the building’s length, provides natural daylight throughout, illuminating each level, and eliminating the need for artificial lighting during the day. The efficiency of the switchback design removes the hallway that typically links stacked stairs, creating an opening that gives adjacent rooms access to the light filtering down from above. 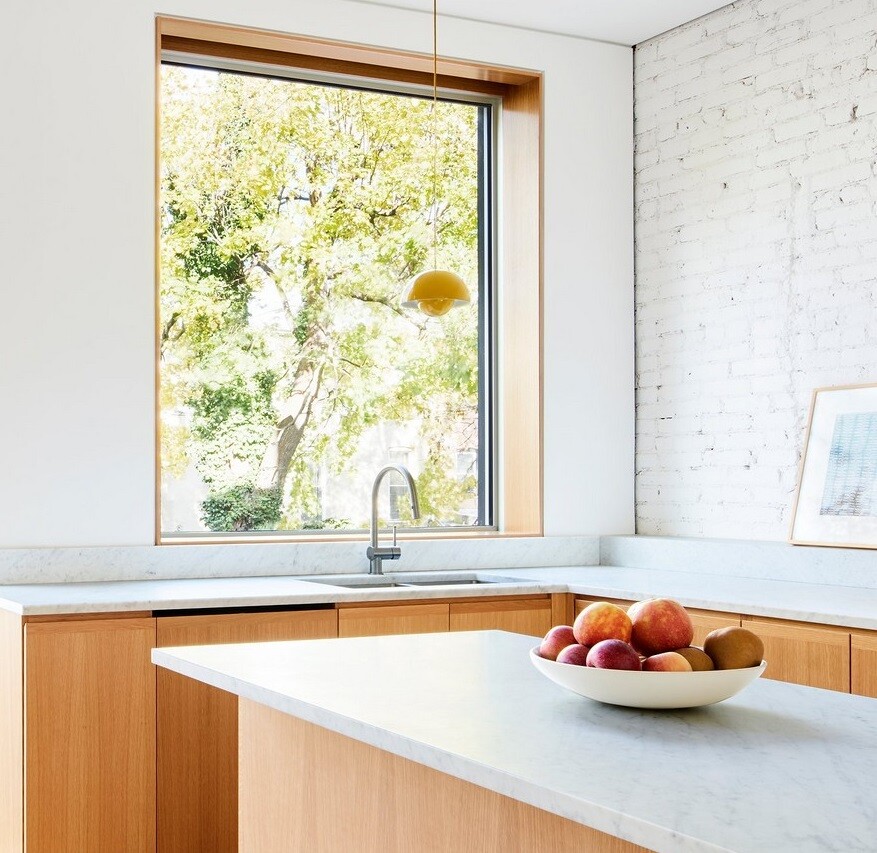 Constructing the switchback stair along with the large skylight required significant structural changes. Because of the stair’s increased width, a large section of the existing structure had to be removed from the floor diaphragm. In order to achieve this, three wide flange steel beams were inserted at each level, reinforcing the existing one-hundred-and-forty year old joists and effectively doubling the original opening. The result is a thirty-two foot high space visually linking all three floors.