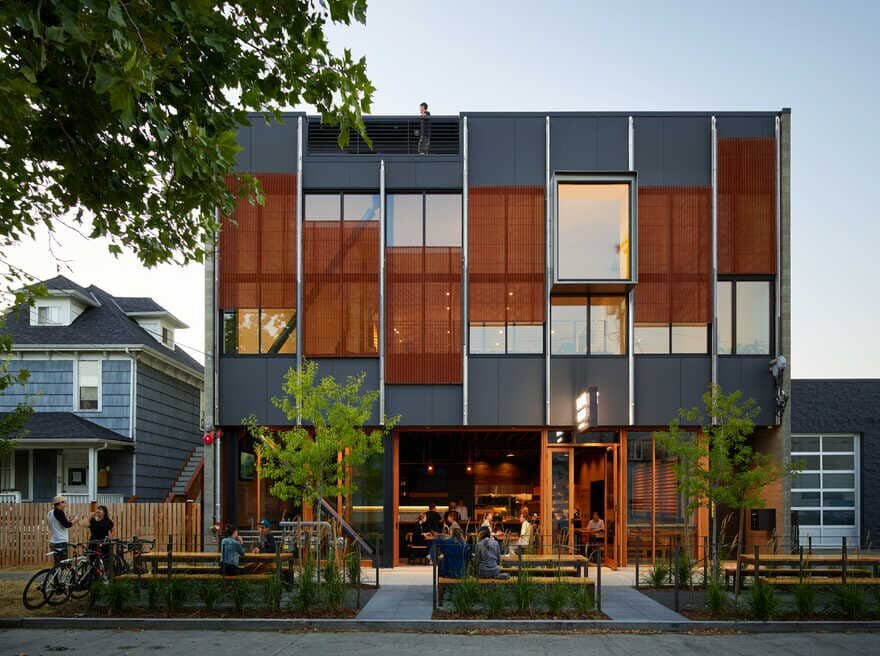 When the owners of several beloved Seattle beer institutions (The Dray and The Yard) wanted to expand into a new part of town, they approached the design team with a vision: design a beerhall-style taproom that was contemporary, yet distinctly Pacific Northwest in character, and that captured the spirit of its light industrial Ballard neighborhood location. The result is Trailbend Taproom, a spare, materially rich bar that feels part workshop, part living room. The bar gets its name from its close proximity to the Burke-Gilman Trail and location which is nestled at the “bend of the Ballard ale trail.” 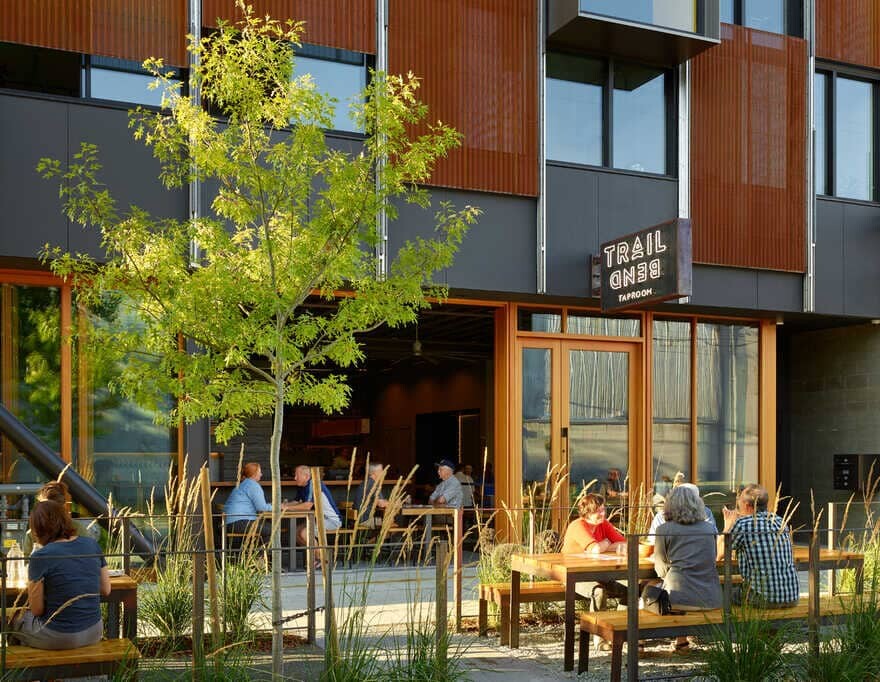 Occupying 1,700 square-feet of the ground floor of the new mixed-use Klotski building—also designed by the architects for the Trailbend Taproom —the ever-rotating array of 42 tap beers take center stage. Outside, the facade is composed of a mix of full-height windows and sliding doors, showcasing the activity inside to the street. The window wall provides ample daylight and can open the inside up to the outside when weather permits, connecting the bar to the 30 seat sidewalk cafe. Inside, the 35-foot-long bar is topped in polished walnut. The taps are set in a niche against a Carrara marble backsplash, which is inserted into a wall that is stained to provide a shou sugi ban (charred wood) appearance. The end of the bar features a laser-etched Richlite puzzle wall that provides an abstracted reference to the “bend in the trail” and the bar’s name. An open-style kitchen features Carrera marble countertops, walnut and steel shelving, stained wood soffits and a Wood Stone Oven for pizzas and baked items. 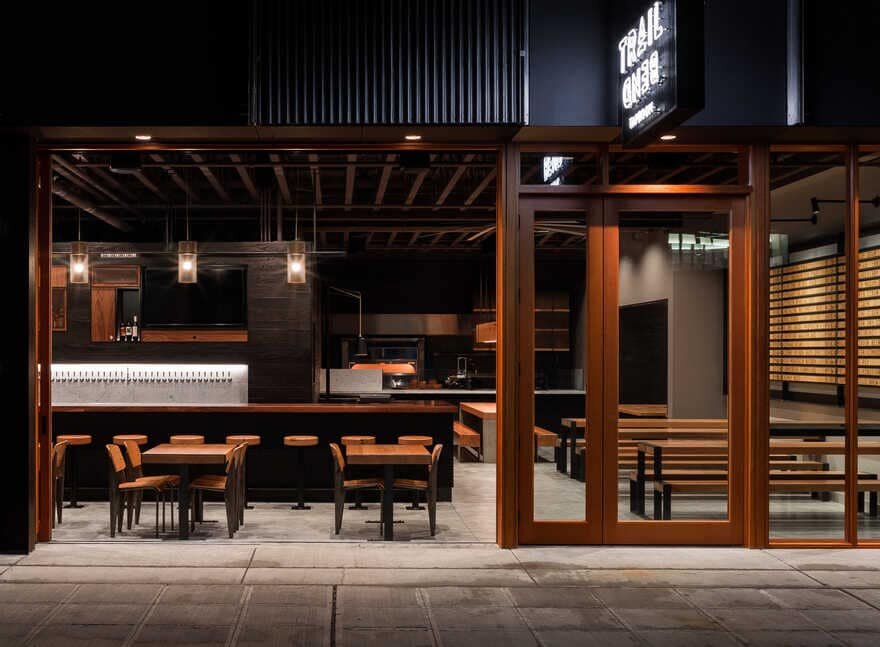 The custom steel-and-wood tap list is inspired by split-flap arrival displays often found in train stations in the early 20th century. The custom designed and fabricated tap list is composed of a 20-foot-long-by-7-foot-tall blackened-steel armature that holds double-sided plywood placards with interchangeable letters that rotate on steel pins. A wheeled, library-style ladder provides access to the uppermost placards. 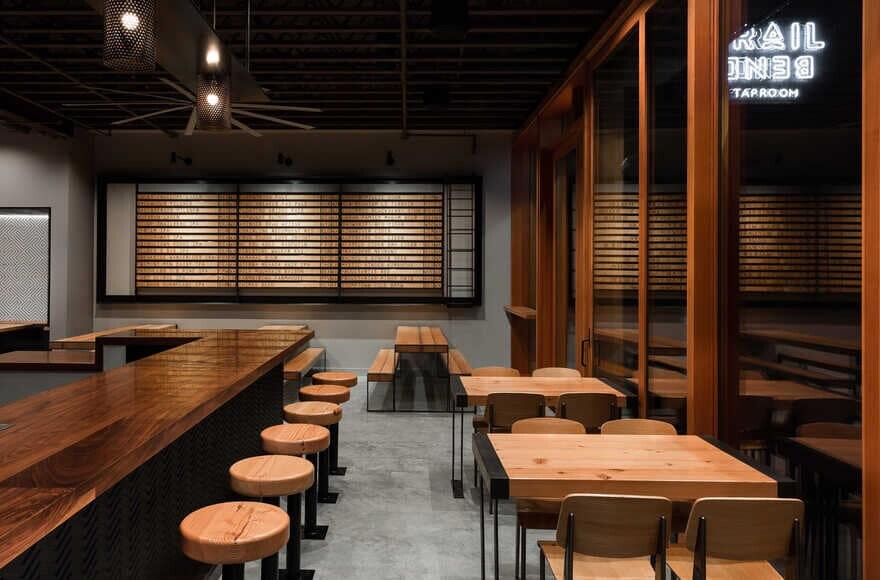 Salvaged wood—sourced from sinker logs that had sunk to the bottom of the Pacific Ocean and recovered near Willapa Bay—is used for table tops, drink ledges, and stool seats, and is set into minimalist, bent and blackened steel frames. Together, the honey-colored wood and blackened steel yields a warm industrial aesthetic. While the original inspiration for the bar was that of a beerhall, the space didn’t allow for rows of long tables. Instead, one monolithic twelve-top table greets customers as they enter. The 11-foot-long table is made of reclaimed fir slabs that span between board-formed concrete legs at either end. A tile and wood-clad alcove provides cozy booth seating. Custom light fixtures, designed by the architects, illuminate the bar and communal table. 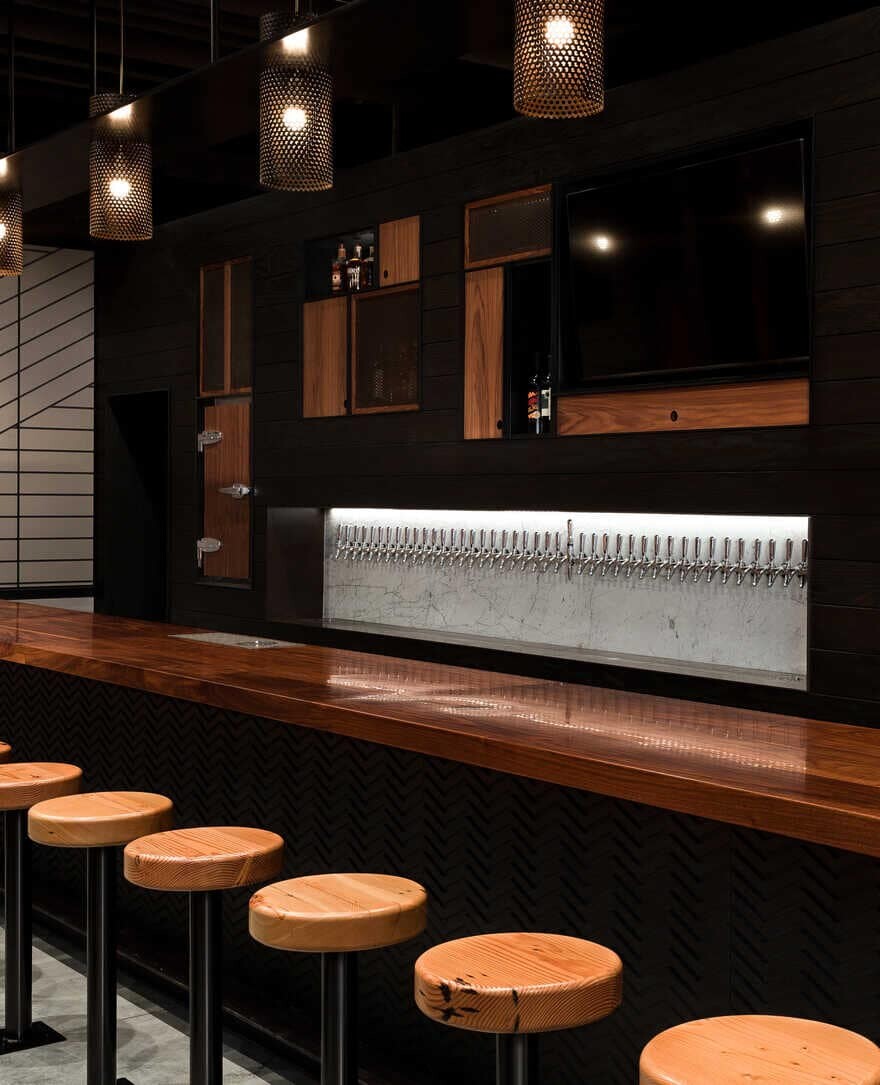 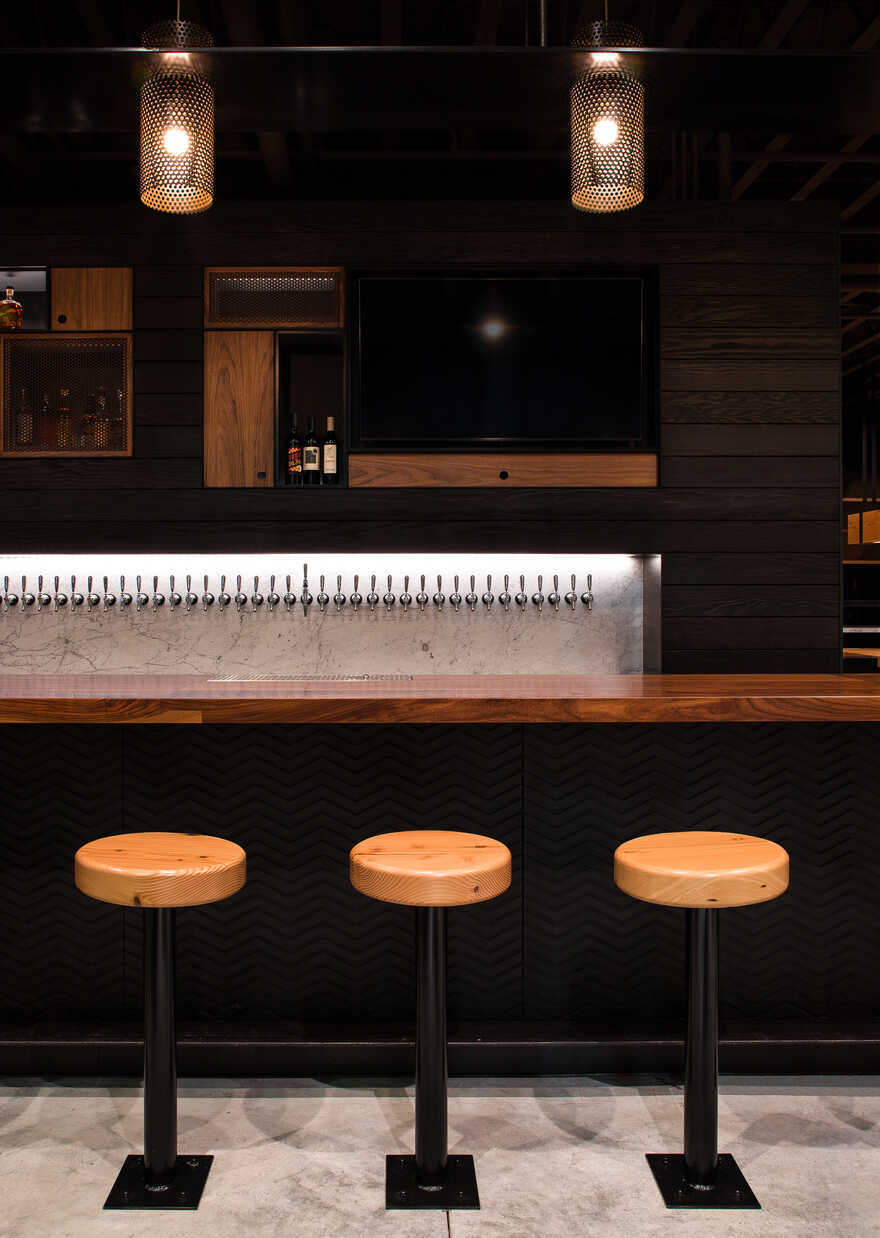 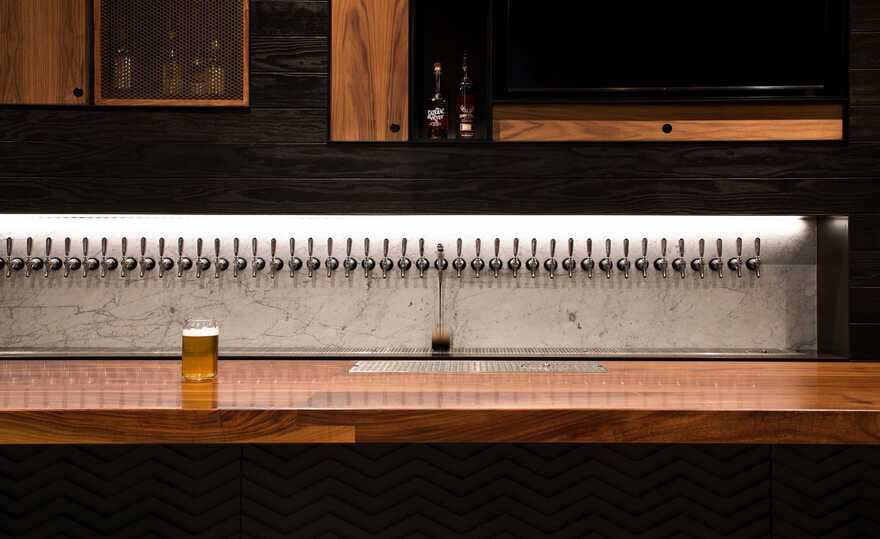 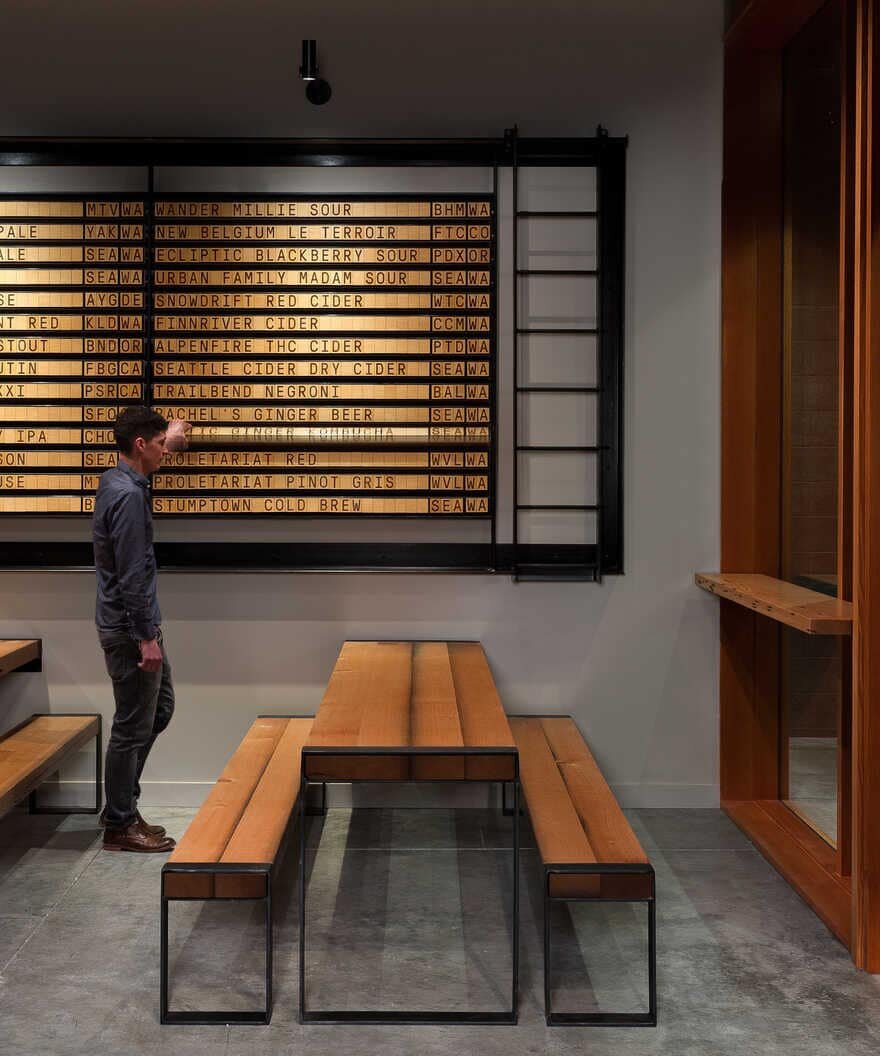 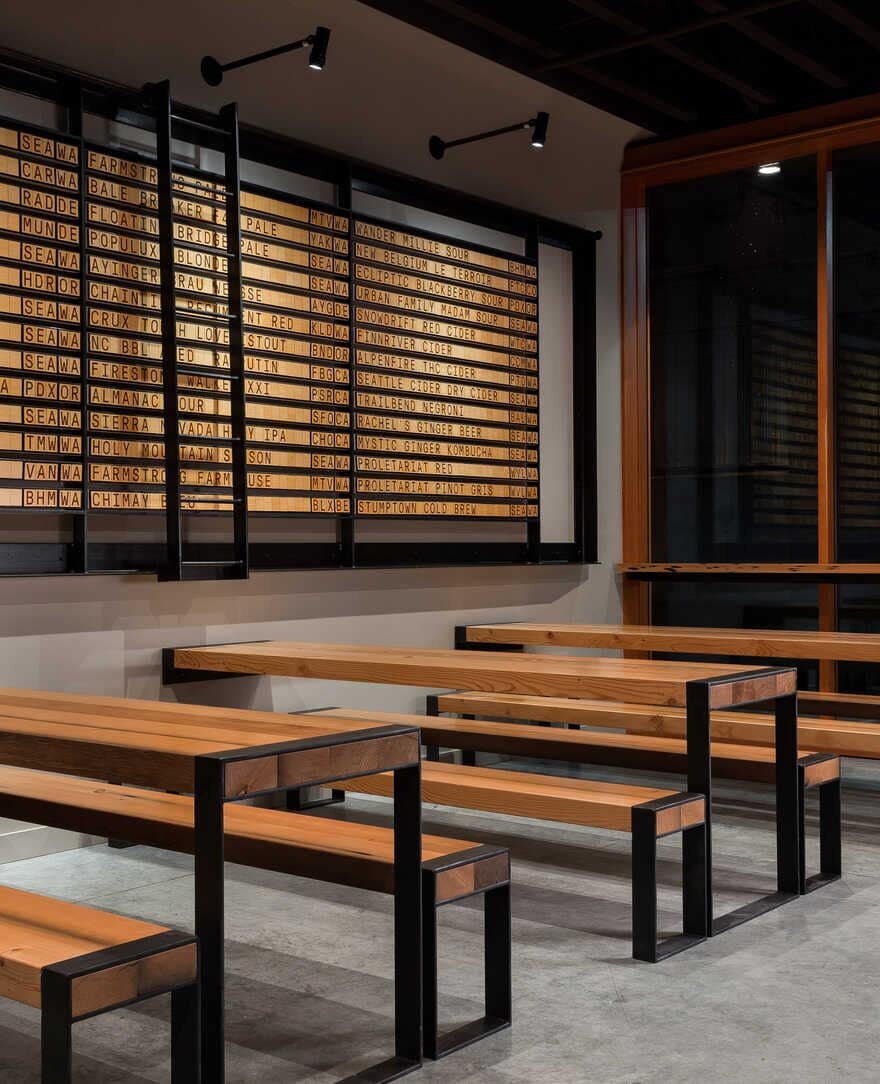 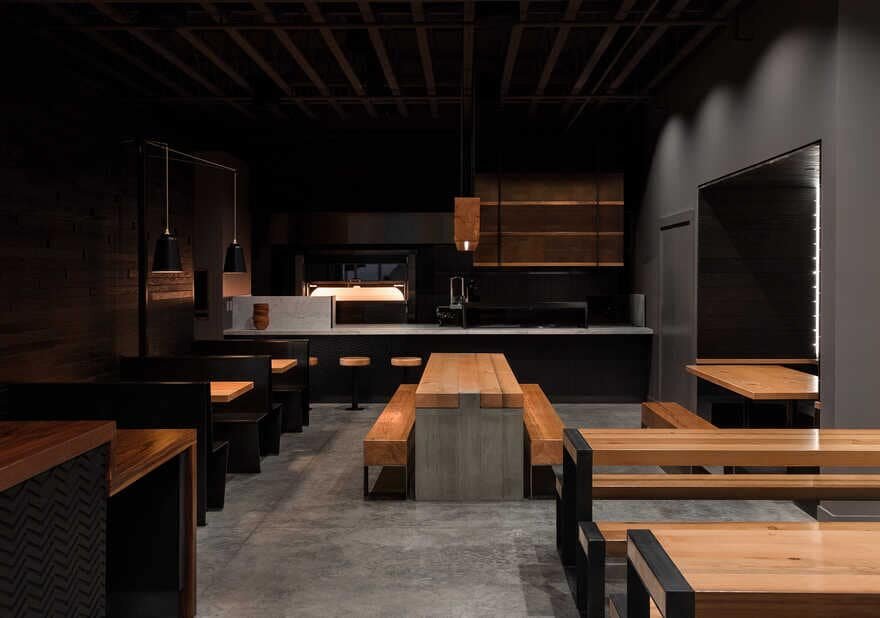 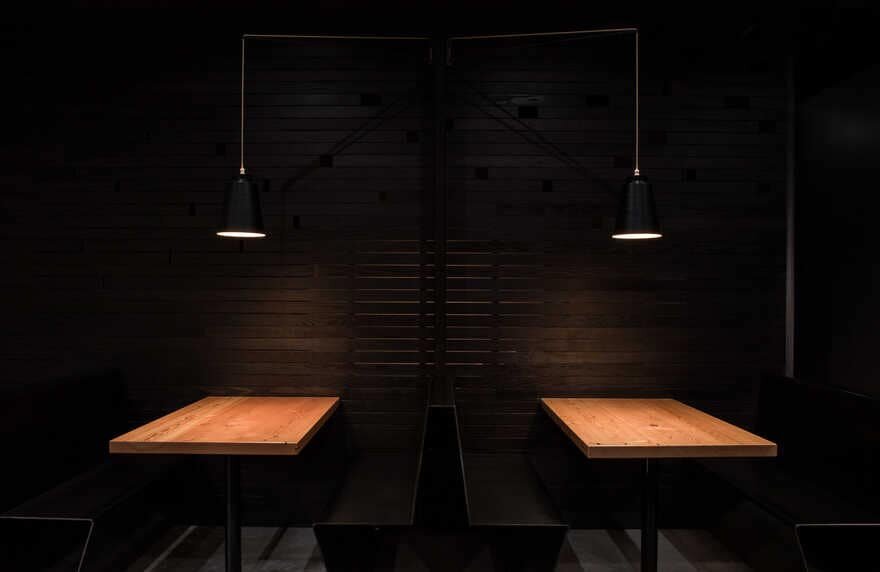 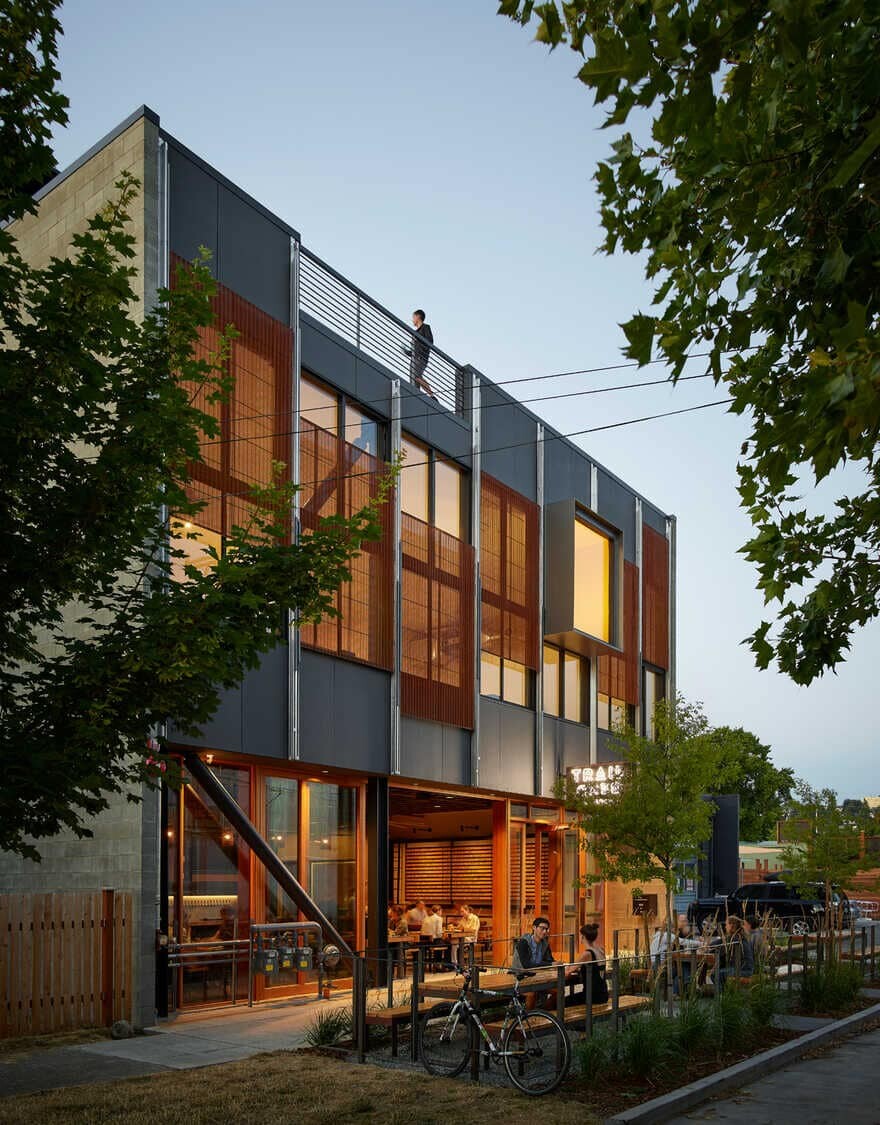 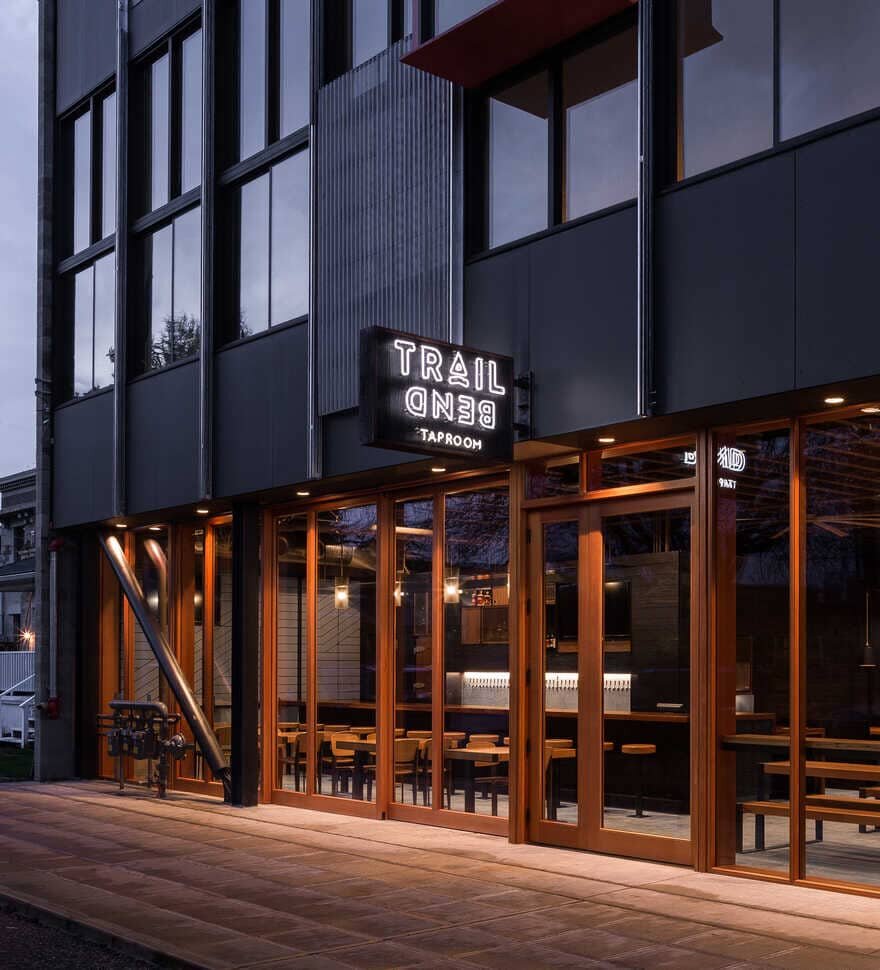