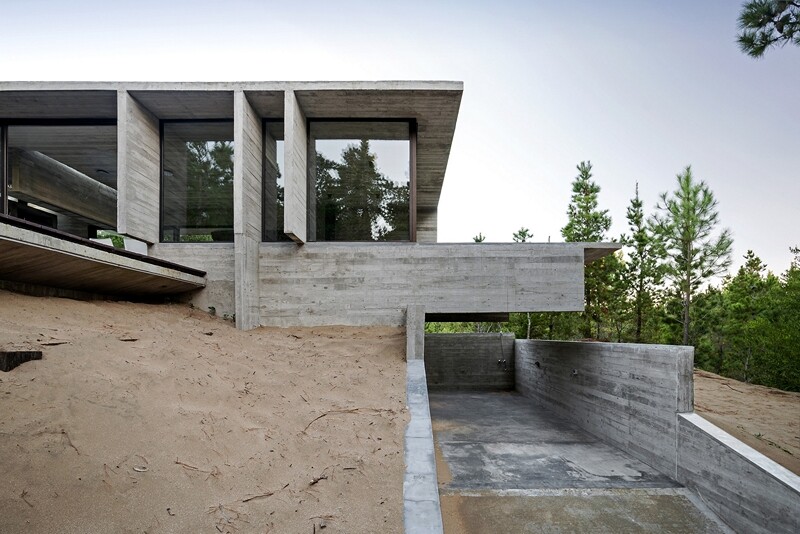 The place
Costa Esmeralda is a real estate development over the dunes on the coast, 390 km (242 mi) from Buenos Aires. The lot to intervene is a high rise dune with the peculiarity of having in part aged woods and also a recent pine plantation, although undoubtedly its most prominent feature is the abruptness of its relief. 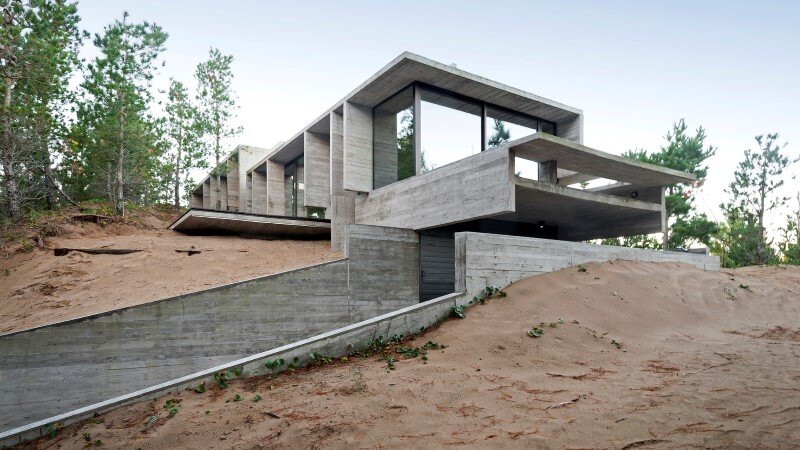 The commission
The request was a house with an aesthetic-constructive proposal similar (concrete structure) to those built in the forest of Mar Azul, appreciated by the clients both for its formal austerity as for the low maintenance required. Designed to be generally used by two families with young children, the house had to have a generous place for meetings, a kitchen visually integrated to it, and three bedrooms, two of them en suite. Also, and especially, the clients mentioned the need for the house to feature expansion terraces and large glass panels to enjoy the scenery. 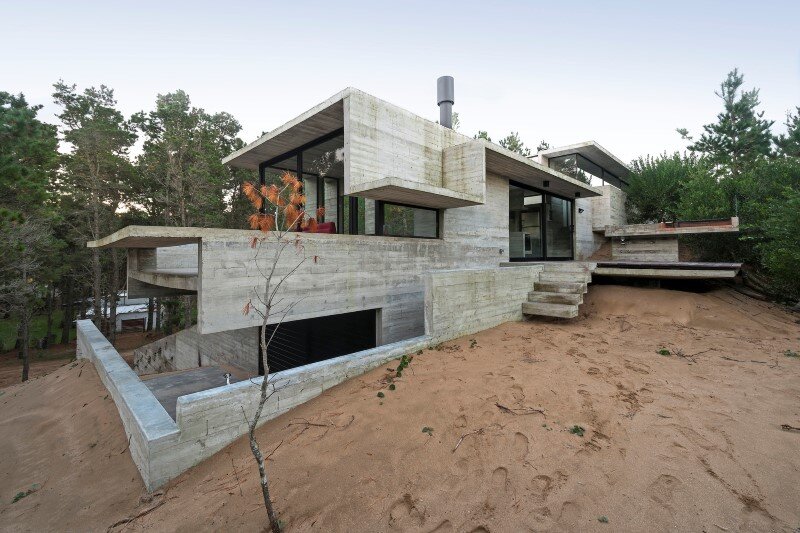 The proposal
The project started to be generated from a ramp which, cutting the dune, will save the highest height possible, thus allowing access of materials and personnel during the execution and, once finished, would serve as a vehicular access to a parking area. From there it’s necessary to continue stairs up (outdoor and indoor) to the highest point of the dune to enjoy those spectacular views.
The house was then volumetrically defined by the deep mark of the ramp and two superimposed to it and aligned with each other in the direction of the slope (oblique to the lot) and, with 1.20m (3.9ft) height difference between them, fit in the relief of the dune. These two volumes orient one face to the north, so that all the rooms of the house receive sunlight controlled by overhangs and vertical partitions. The opposite south façade, with an opening on the volume of bedrooms that runs along its entire length, ensures illumination on circulations and allows cross ventilation. 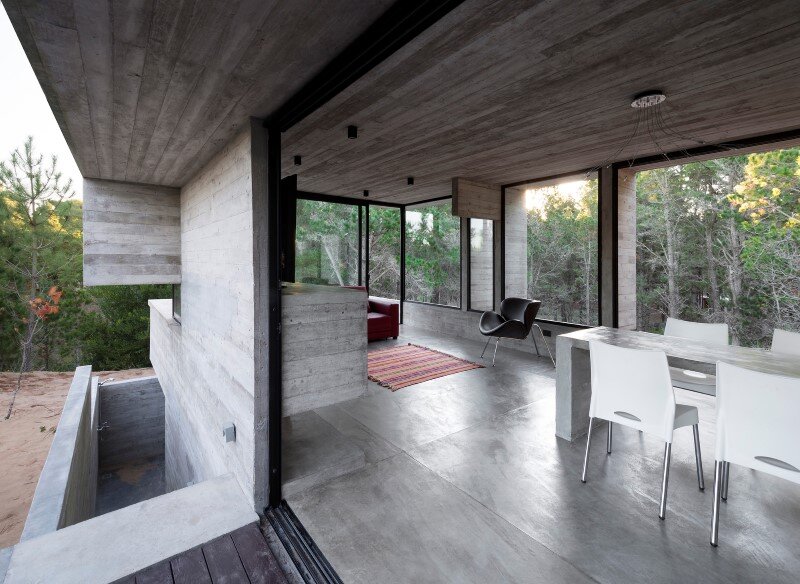 The functional organization
You reach the house by car or as a pedestrian up the ramp to the partially covered garage with an attached tank. From there, saving an unevenness of a floor with a staircase also partially covered, you access to an open floor with one fixed element (counter – table – separator) which gives privacy to the kitchen sector in relation with the rest of the social area. The activities on this floor of the house have its expansion onto three terraces, which also fulfill the function of being places of contemplation of the surrounding landscape. Going up a staircase again, but this time indoor and bridging an intermediate level, is reached a circulation along which are accessible in the first place the main bathroom and then the three bedrooms. Two of the bathrooms in this sector, which are situated in the center of the plan, are illuminated and vented through openings in the roof. 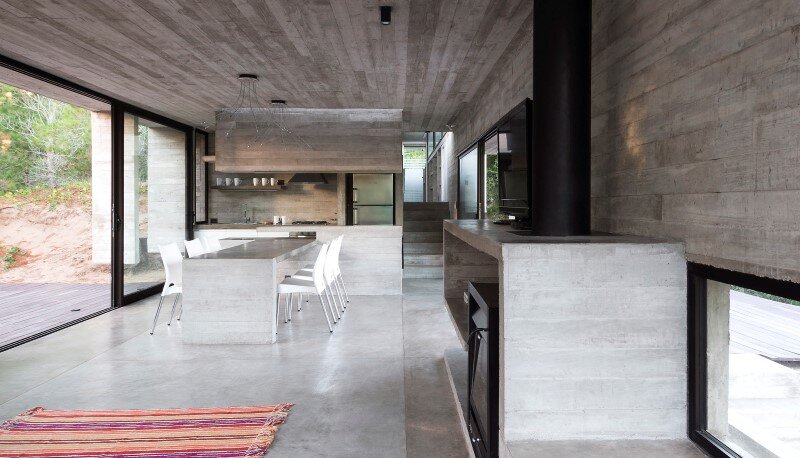 Structural solution
The volumes are solved with slabs of H º A º, supported in bearing walls through simple beams on the south façade, and through closed inverted beams on the north side to capture more light. The partitions are grounded in the dune by perimeter beams. The volume which covers the garage was designed as a cantilever which rests on two major beams, to make evident the independence of the structural system that solves the dune rise and the house itself.

The construction
The work was done in exposed concrete, a material that unifies in a single element structure and finishing. H21 concrete was used with the addition of a fluidifiant so that this mixture, with little amount of water to harden, results very compact and doesn’t require sealing. Furthermore, the expressive quality of concrete and its resistance and impermeability, made superfluous any type of surface finish. Cross ventilation was taken under account both in bedrooms and on the main floor to allow air circulation and thus to ensure the house will be refresh with the sea breeze in summer. The heating system of this house is given by the use of hot and cold air conditioners, a home-salamander was also included. The few interior partition walls are of brick, plastered and painted with white latex. The floor cloths are also from concrete screed divided with aluminum plates. The meeting between walls and the floor was resolved with a recessed aluminum profile, as a base. Visit Besonias Almeida Arquitectos 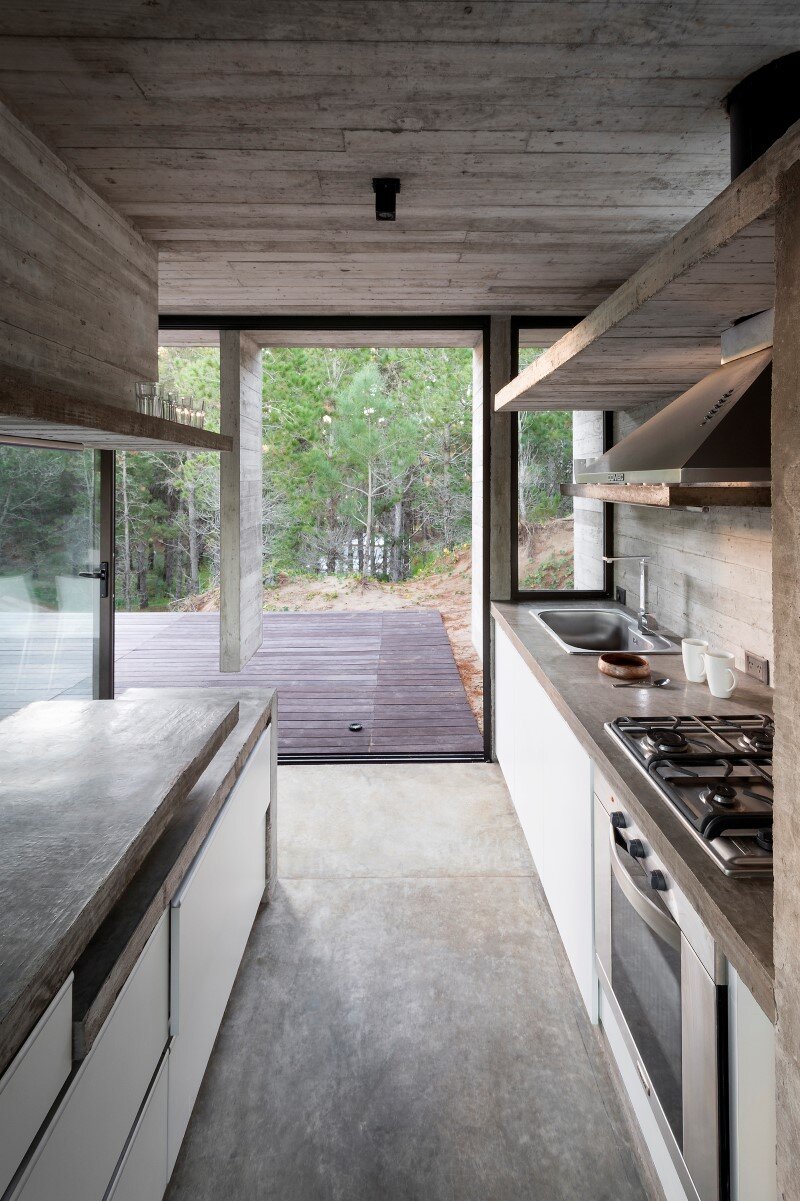 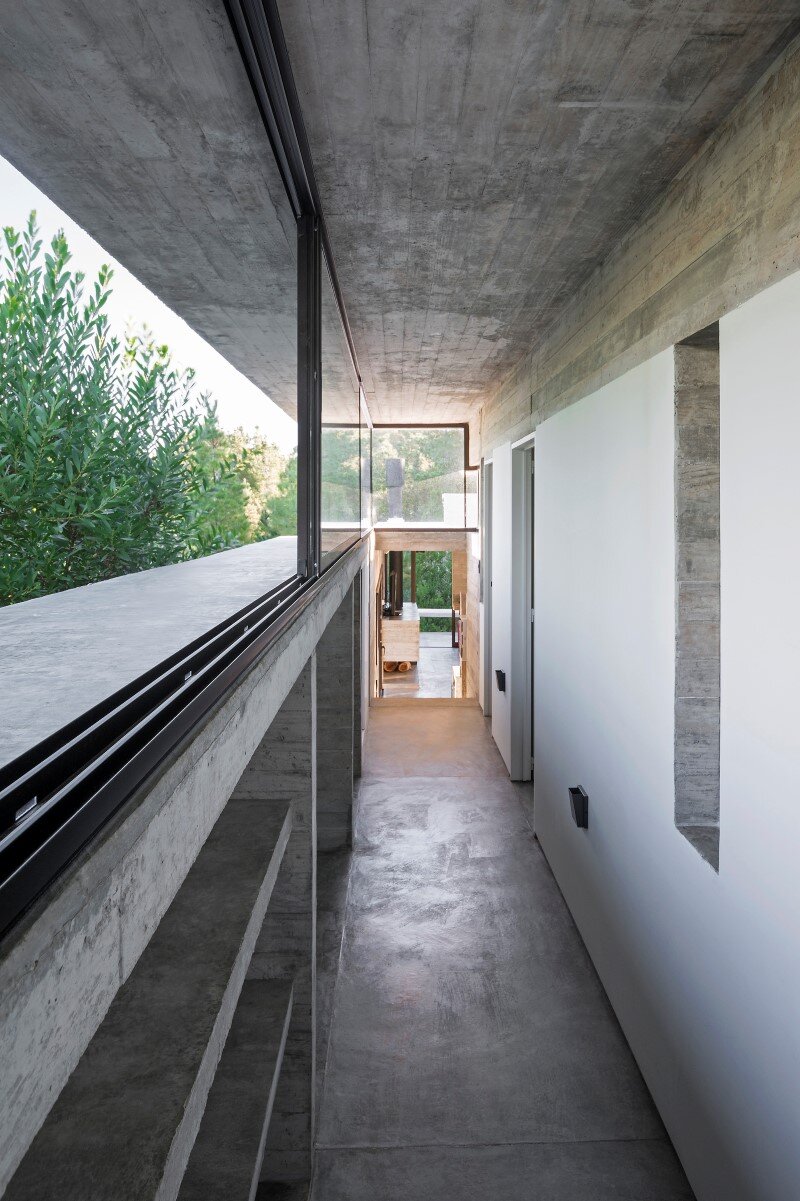 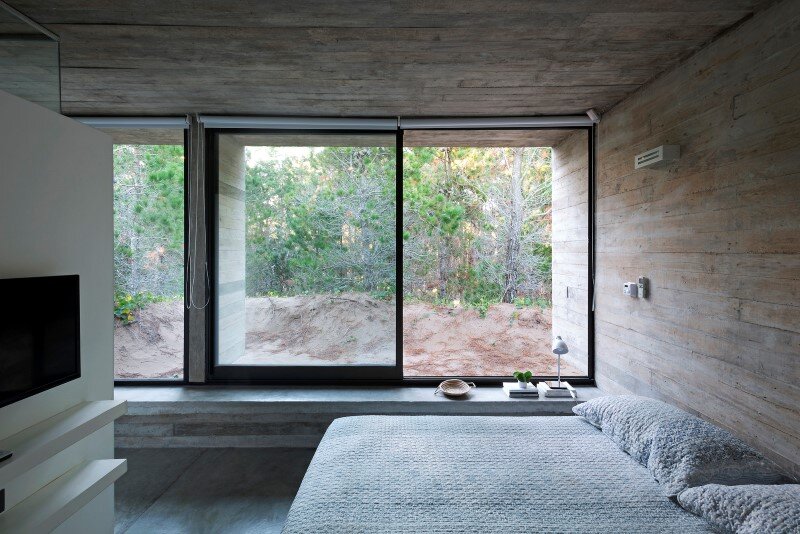 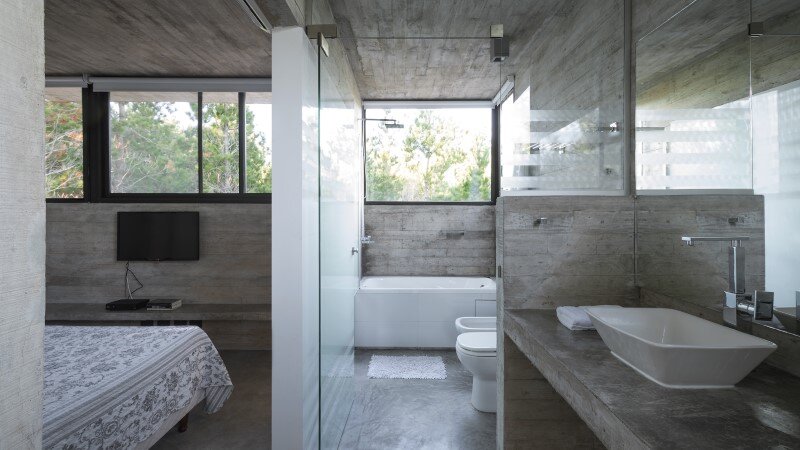 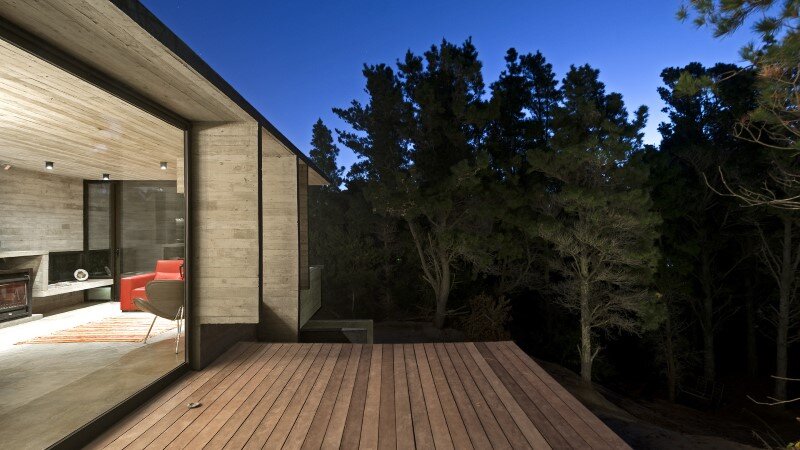 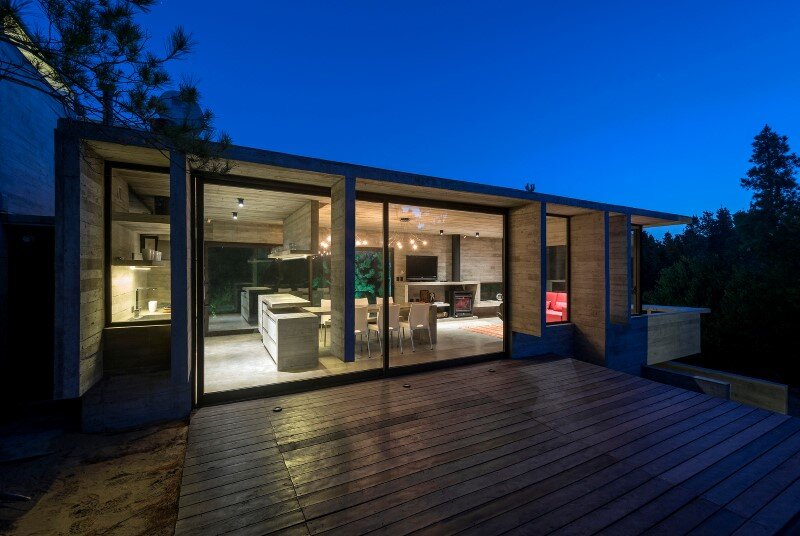 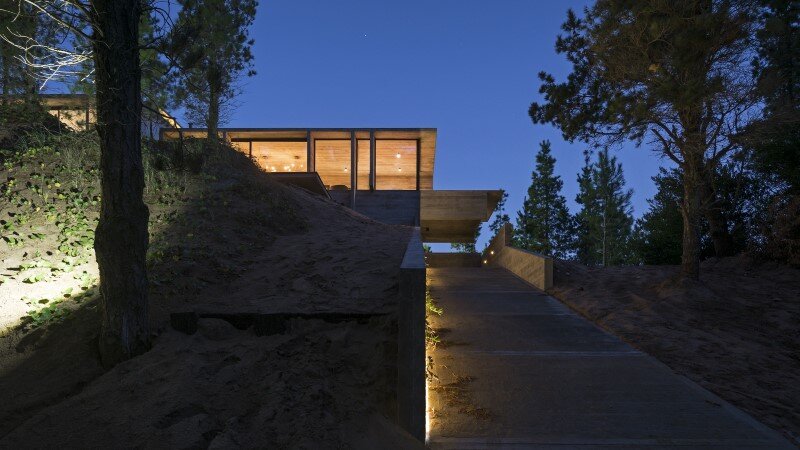 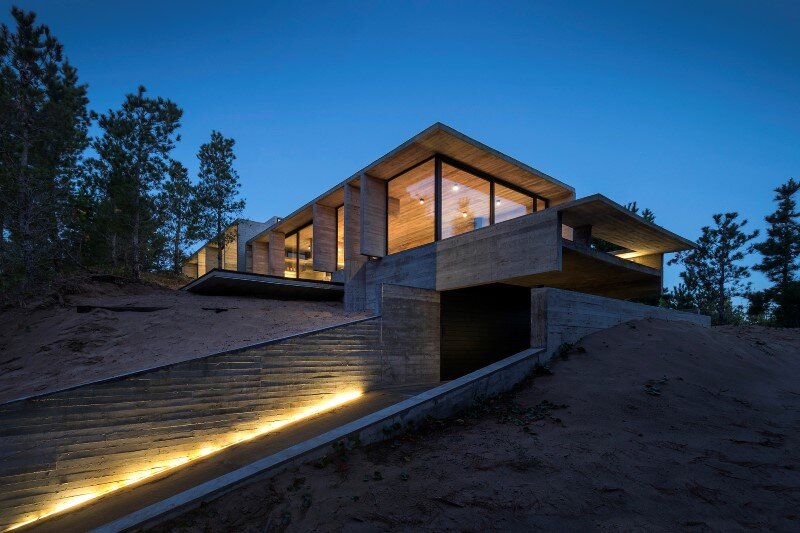 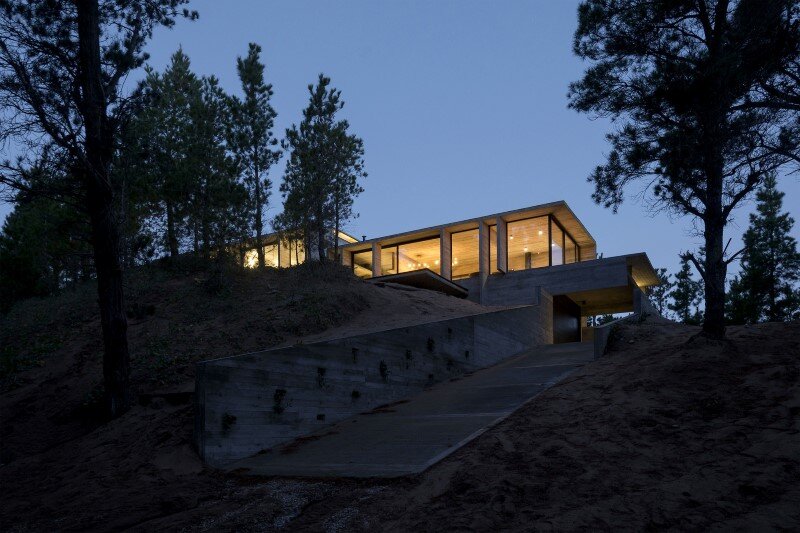