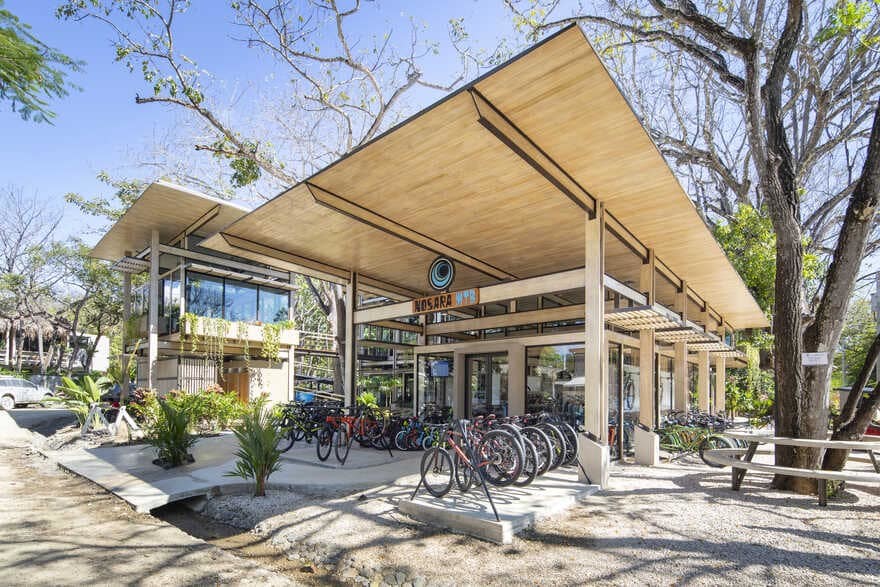 As an extension to the Gilded Iguana Hotel in the town of Nosara, The Athletic Center was designed as a small village amongst the trees that creates a public space which integrates locals with visitors with similar interests of pursuing an active lifestyle and wellbeing.
The site is situated in an incredibly central location acts as a perfect “adhesive” for retail, sports, and leisure which in turn coexist within the exuberant nature. A surf-shop, bike-shop, gym, and multiple studios for Jiu Jitsu, yoga, and personal massages create the perfect atmosphere for those wishing to come to Costa Rica in search of activity and fun. 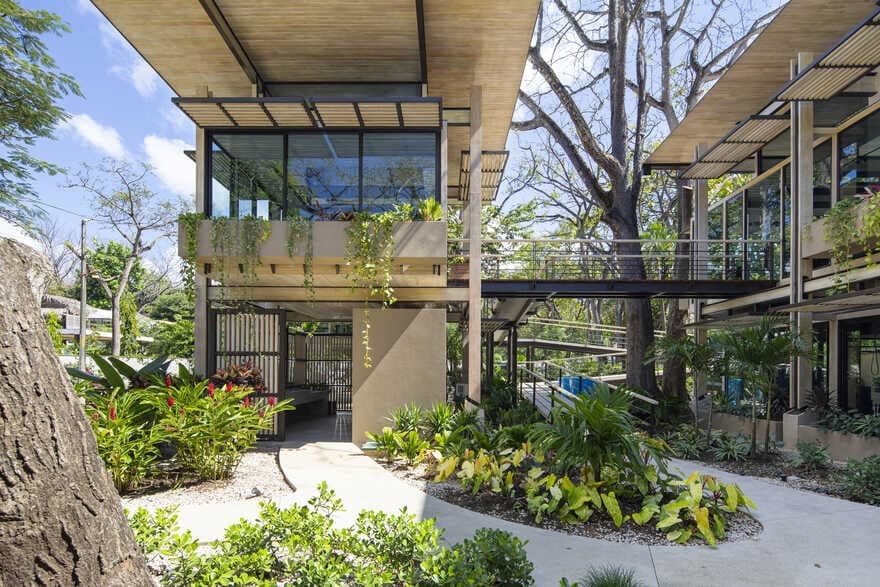 Concept
Studio Saxe and the client wanted to explore intelligent ways of adapting a complex and diverse program of spaces within the existing framework of trees and wildlife of the site. Human activity is intended to co-exist in symbiotic relationship with the natural world in order to accentuate the path towards wellbeing. 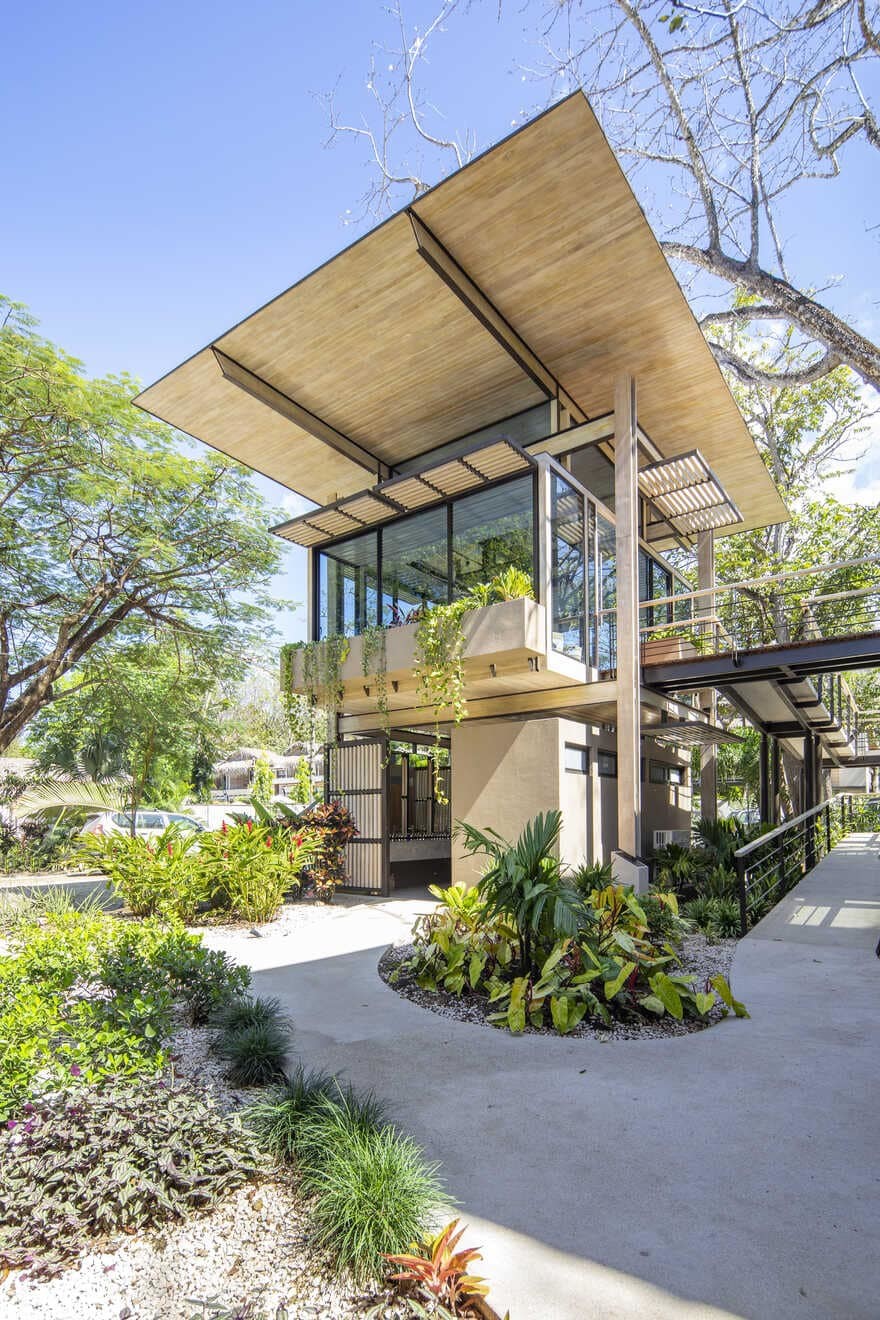 Design
Studio Saxe decided to break the mass of what could be a large building into separate pieces of program that in turn could fit within the voids around the existing trees, whilst interconnecting them with bridges and paths to create a public realm that is both diverse and intricate. The result is a series of interior public spaces that connect people to nature whilst protecting from the intense sun and heat.
Working closely with structural and electrical-mechanical engineers, Studio Saxe managed to coordinate foundations and services around tree roots in a flexible array that allowed trees to keep growing and the buildings to sit very close to the existing vegetation. 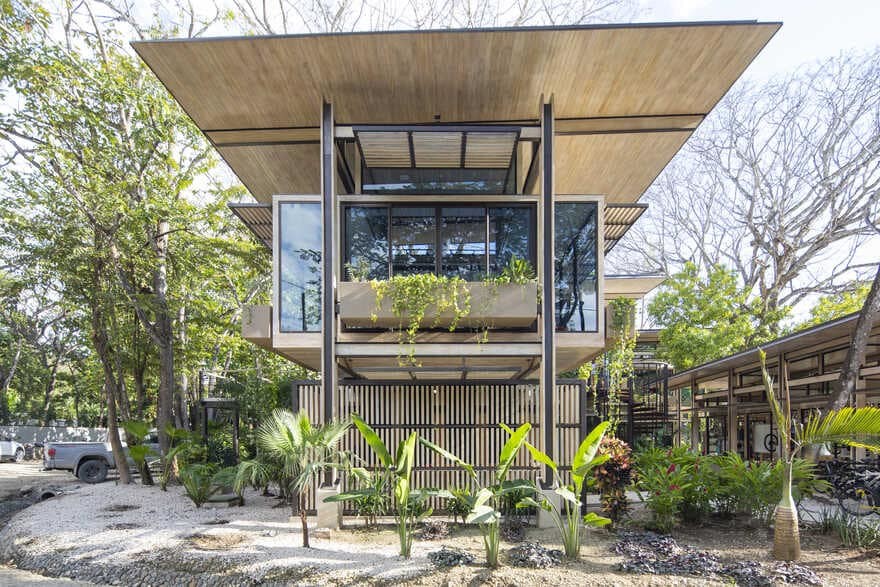 Construction
The construction method applied to The Athletic Center is mainly focused on a light-weight steel structure that was prefabricated off site in a controlled environment and assembled quickly to create minimum impact on the property and maximum efficiency of construction.
At Studio Saxe we believe that the process of construction should be as light and as unobtrusive as possible when dealing with a complex and diverse ecological environment. The main steel frame was then clad in teak wood and long overhangs create protection for all faces, while large glass walls create a connection to the outside trees and vegetation. 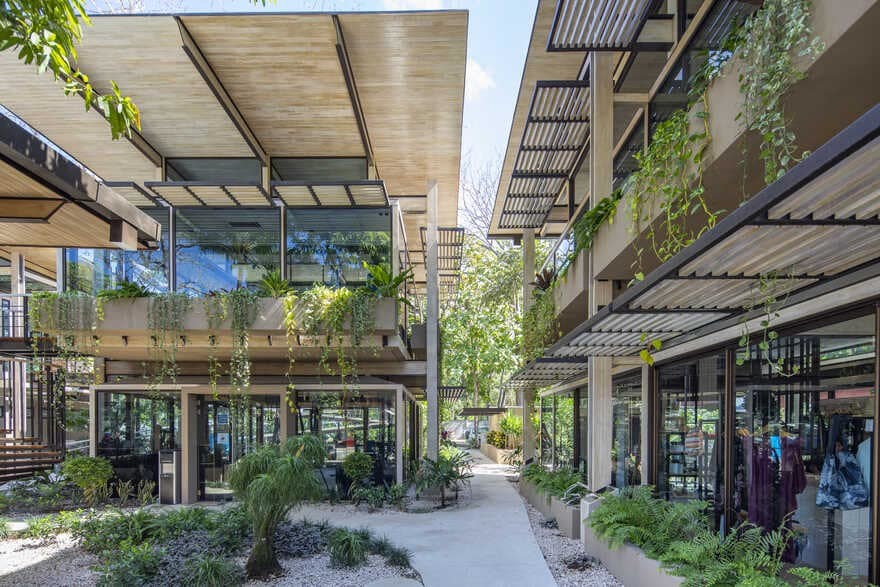 Sustainability
This project was conceived as a modular construction approach in order to have the least amount of impact on the natural landscape. It was designed to preserve and protect the existing vegetation and natural habitat of its surroundings through intelligent engineering by disintegrating the mass of the building into many components to distribute the project around trees and vegetation.
Long roof overhangs not only protect the inside spaces from the blazing sun and the rain, but also are used to collect water in order to be re-used it in the building’s mechanical systems and for landscaping irrigation. 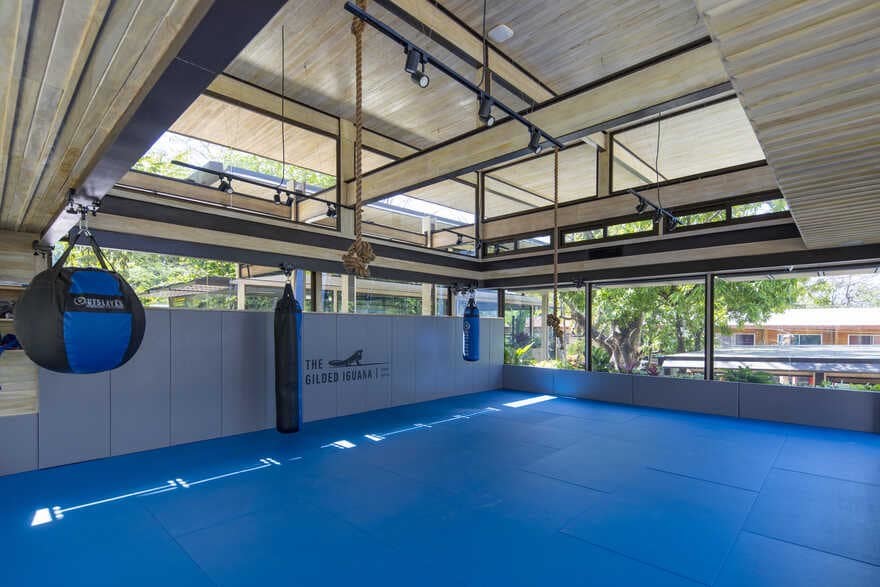 Reforested teak wood is combined with durable materials for the structure to create a long-lasting construction that combines both local materials with modern construction techniques. The orientation and disposition of the elements and the roof lines are designed in terms of bioclimatic strategies where solar orientation, wind patterns, noise, dust, and other factors are considered in order to create efficient structures that work with minimal energy consumption. 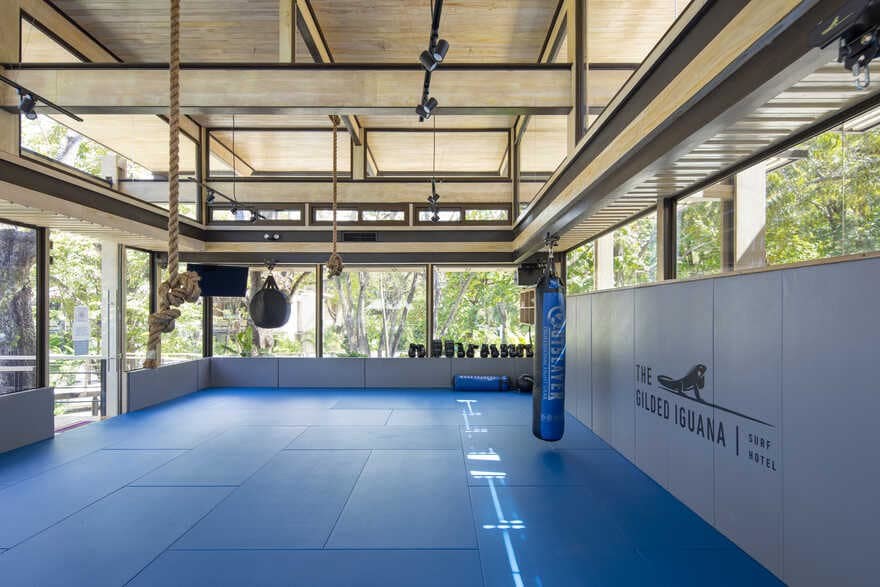 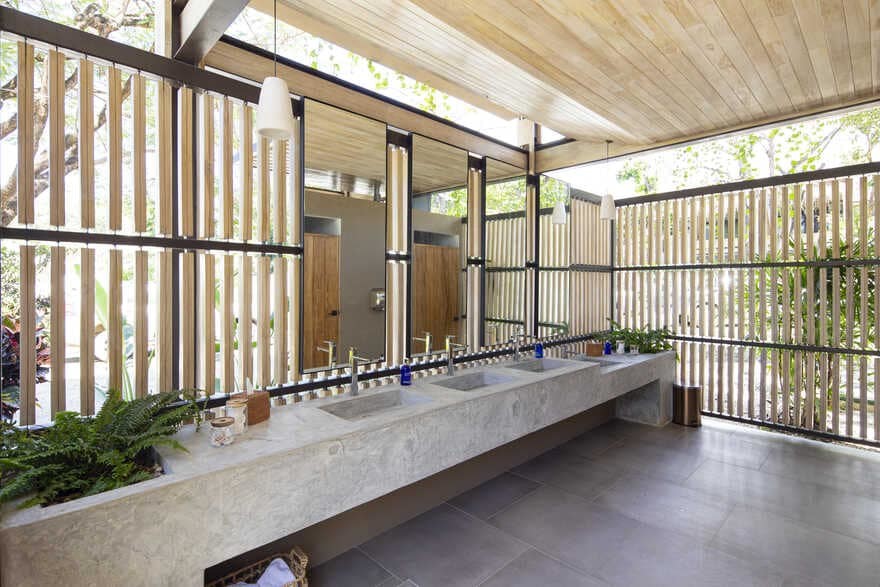 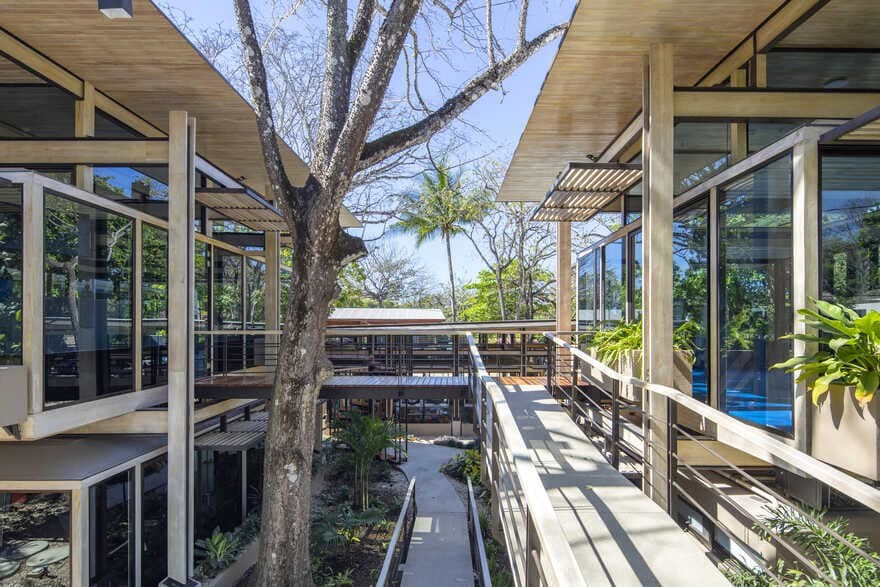 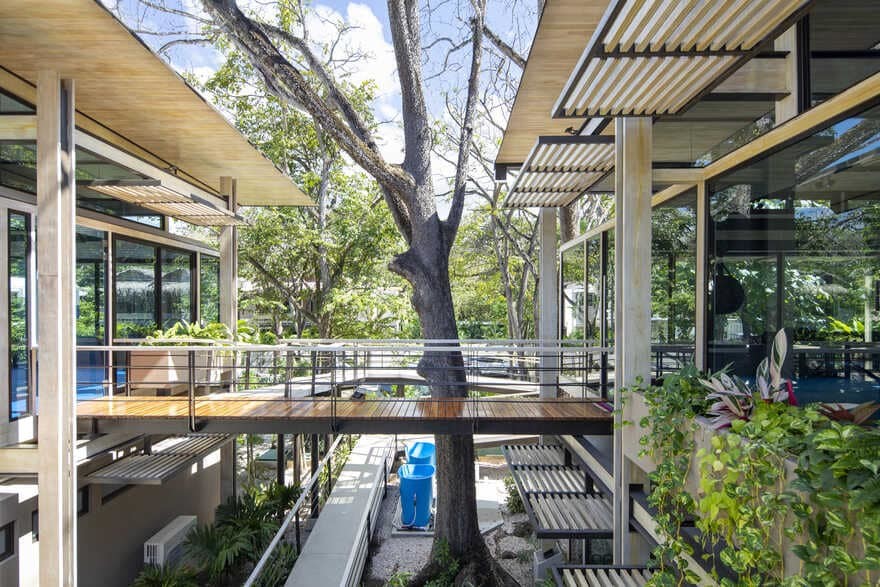 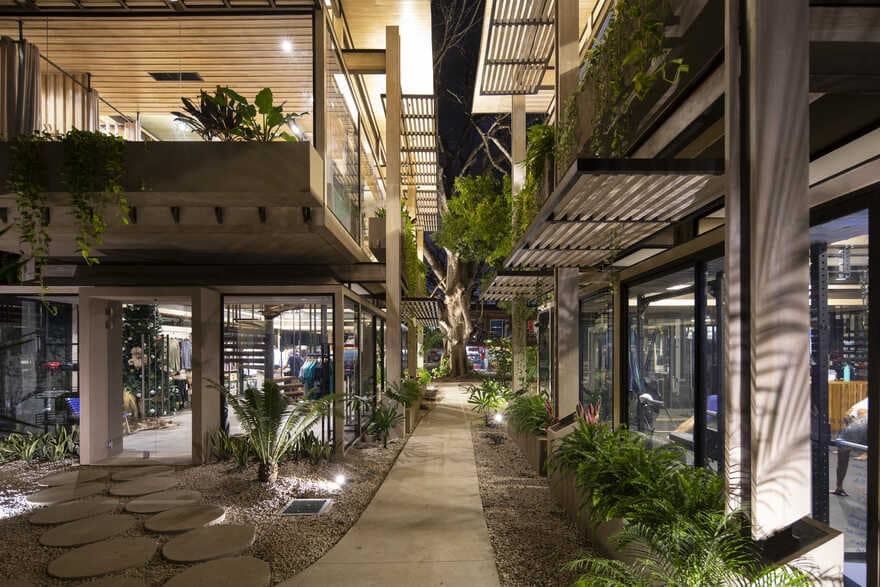