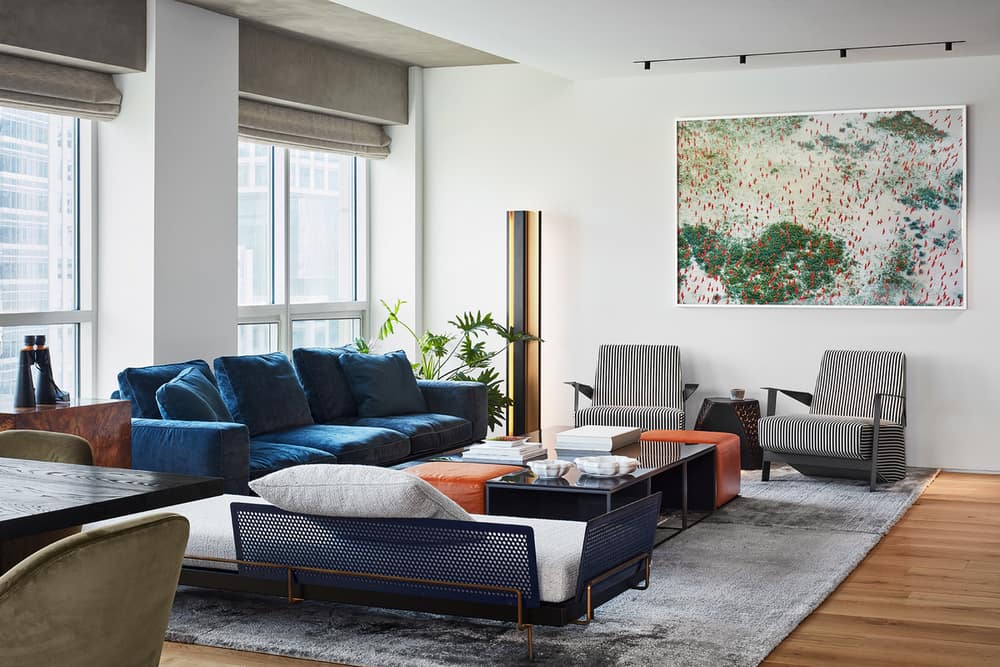 The design of this home was directly shaped by the challenges and opportunities afforded by the combination of two separate apartments in a high-rise near the Chicago Museum of Contemporary Art, each with exceptional lake and city views and generous outdoor spaces. Six years ago and ten floors away in the same building, SLH designed the clients’ previous residence. An expanded family and a change in lifestyle in which the husband was increasingly working from home, prompted the need for a new home. One key request of the clients – that there be a direct view of Lake Michigan immediately upon entering the apartment – helped define the overall character of the project. Throughout, distinct spaces are defined but rarely by conventional full height walls. 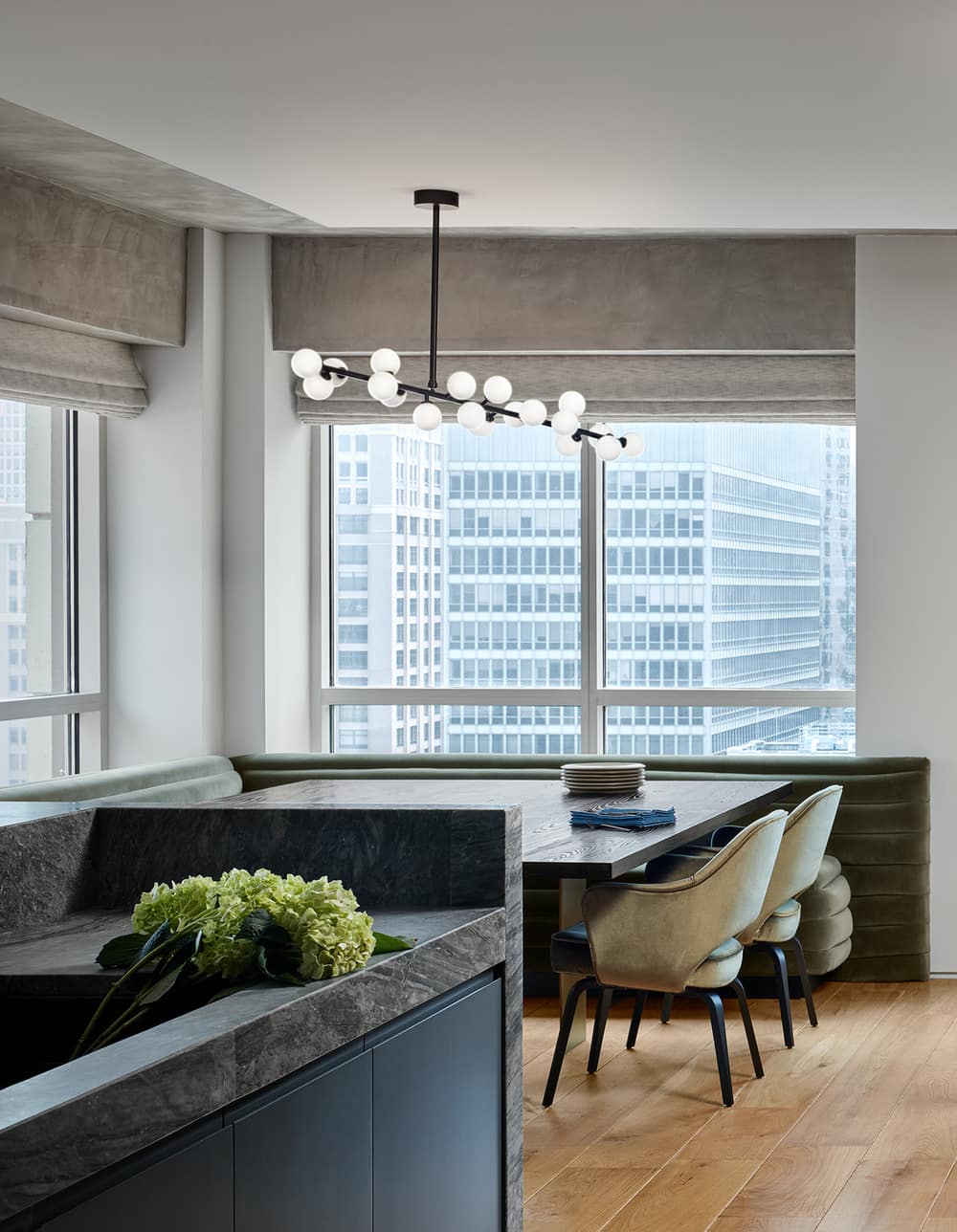 Standing between the entry door and the lake facing corner windows was a forest of plumbing pipes and mechanical chases, none of which could be moved. These building common elements also set the kitchen’s position – right in the middle of the desired sightline. A series of randomly spaced and sized ebonized oak columns conceal piping but remain visually permeable. The heights of three large floating bars of cabinetry were precisely calibrated to be just high enough to mask the kitchen’s functional elements. While permanently home to just three, the residence is used frequently for entertaining. A generously scaled bar sits north of the kitchen across an open walkway and serves as backup for larger groups. 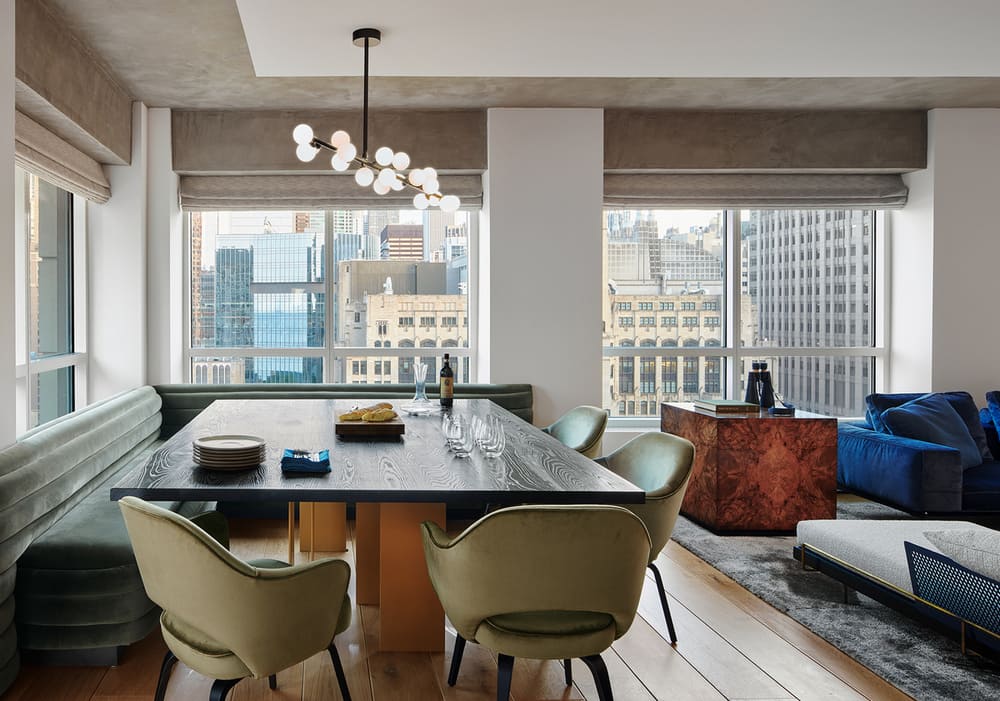 Immediately off of the kitchen is the combined living and dining spaces. A plush and light reflective rug that anchors the living area was selected because of its contrast to the flatly sheened, open pore wood flooring. The over-scaled lacquered coffee table has sections carved out for movable ottomans wrapped in supple cognac-toned leather. The low-slung and elegant proportions of the Flexform sofa bely its remarkable comfort. The color of the lake on a bright spring day is evoked in the blue sofa upholstery.
A perforated metal daybed topped by soft cushions faces off across from a pair of Richard Nuetra designed Silverlake chairs, their angularity highlighted by a boldly striped fabric. The ceiling is detailed as a simple white plane, almost shocking in its purity; its only break is at the window line where it is pulled back with a razor-sharp edge to reveal the raw concrete slab above. Sand colored linen Roman window shades filter light and soften both the concrete and the plaster. 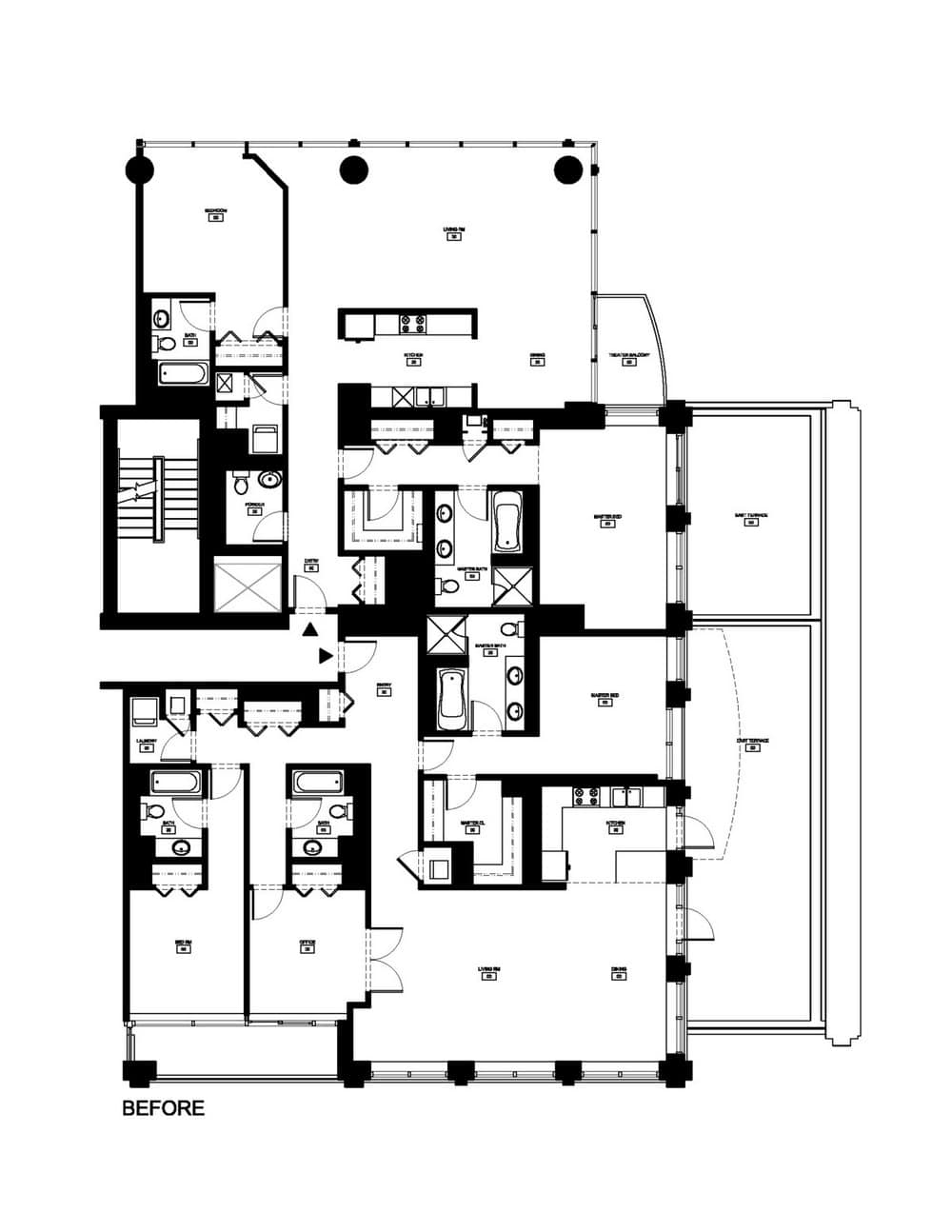 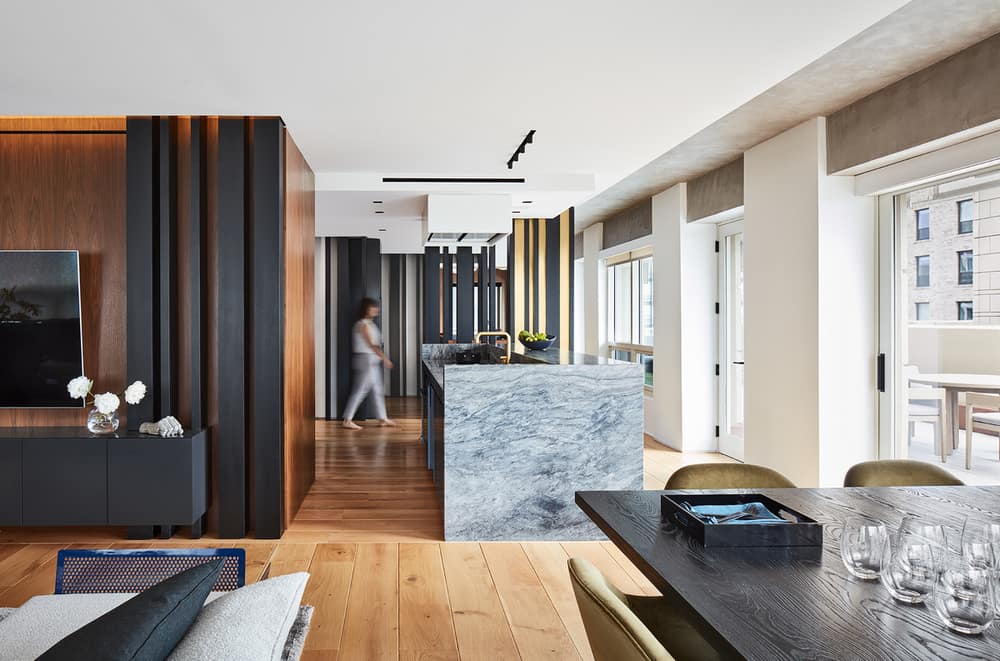 The surface of the custom ash dining table was sandblasted and the resulting texture is highlighted by the southeast light pouring into the space. The table’s base is a cluster of matte finished brass plates. Iconic Saarinen chairs are paired with an el-shaped banquette of channel tufted mohair, its deep back the perfect spot to prop up an arm when gazing at the lake below. 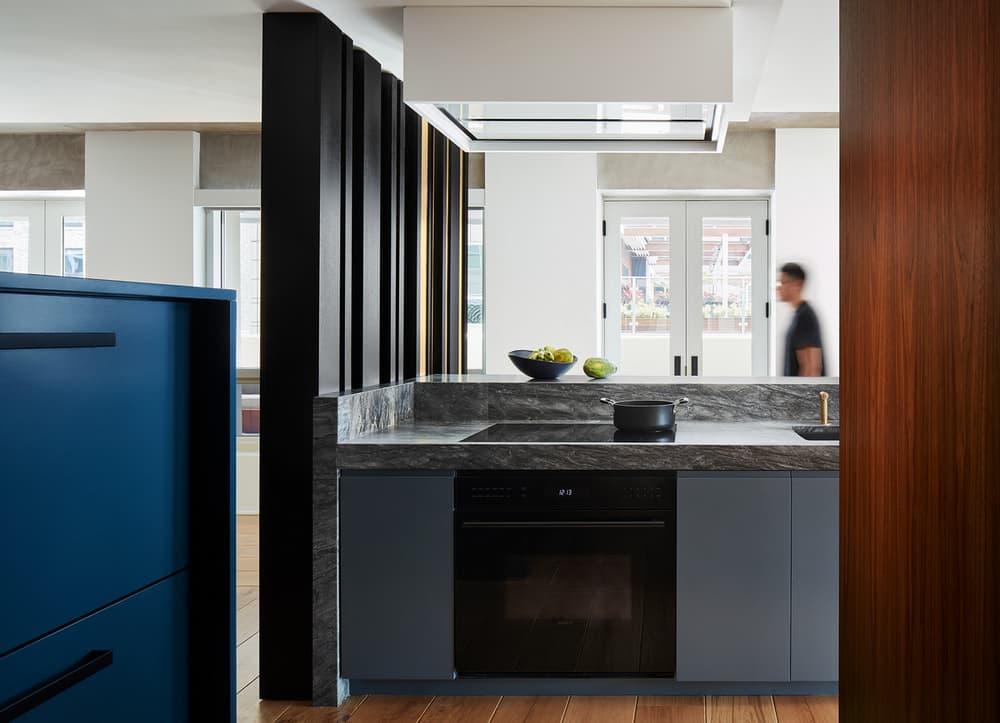 The wide plank white oak flooring used throughout the home was also harnessed to delineate space but maintain a sense of openness. The edges of each plank of wood were generously rounded to emphasize the linearity of the joinery. At thresholds between spaces, such as between the kitchen and dining area, the orientation of the wood was strategically rotated. In effect the casual flow of the apartment is tempered by the floor’s rigorous geometry. 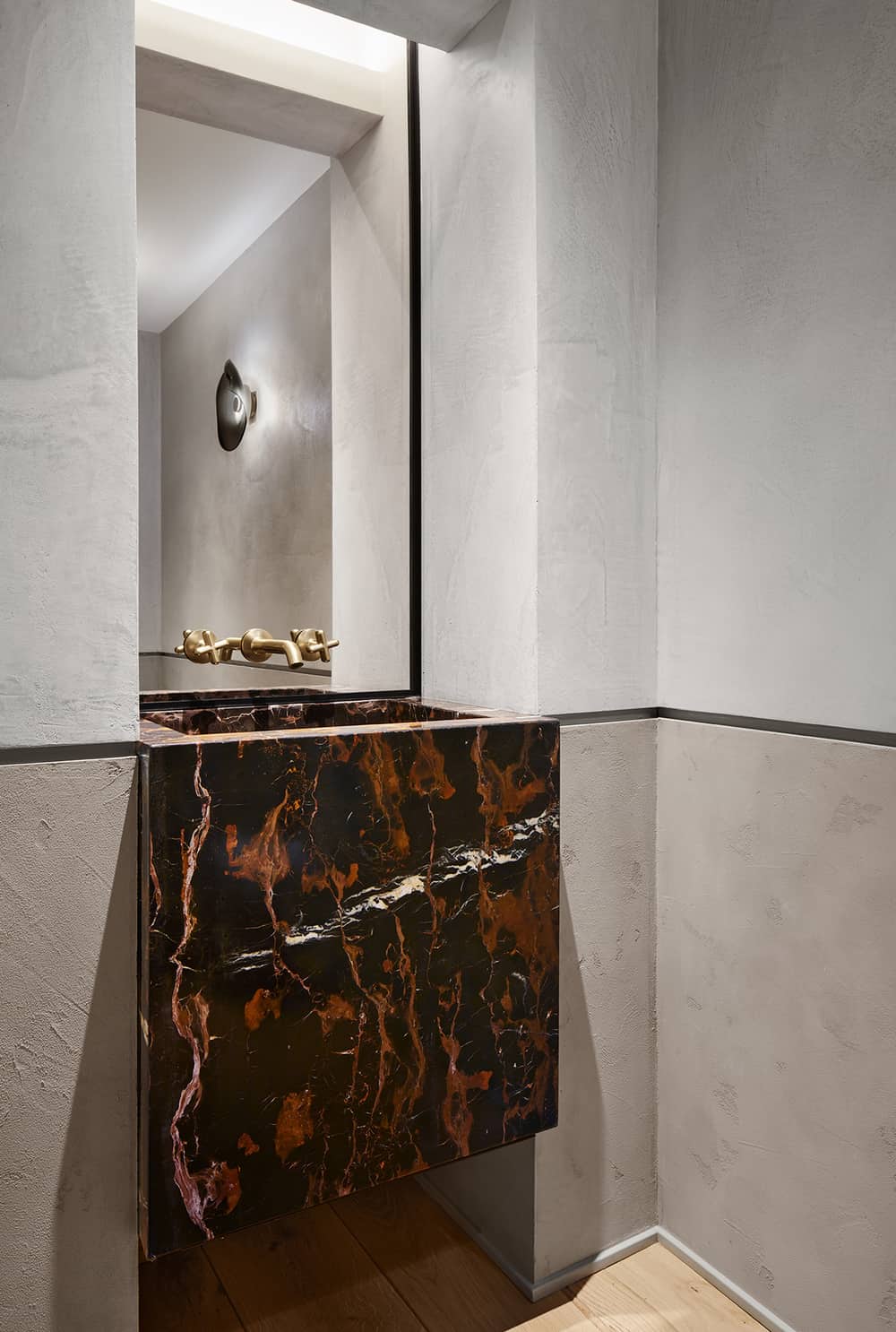 A sixty-foot axis runs from the dining area into the study. While the oak flooring extends into this space, all other surfaces including the ceiling are faced in burled walnut. The dark exuberance of the wood is tempered by crisp detailing and furnishings chosen for comfort, sculptural distinctiveness, and tactile luxury. The black facade of a Mies high-rise visible from the north window is reflected in the room’s textiles. Another screen of wood columns sits between the study and the bar. When privacy is required for the home office, a room-sized pocket door can close it off from the rest of the apartment. 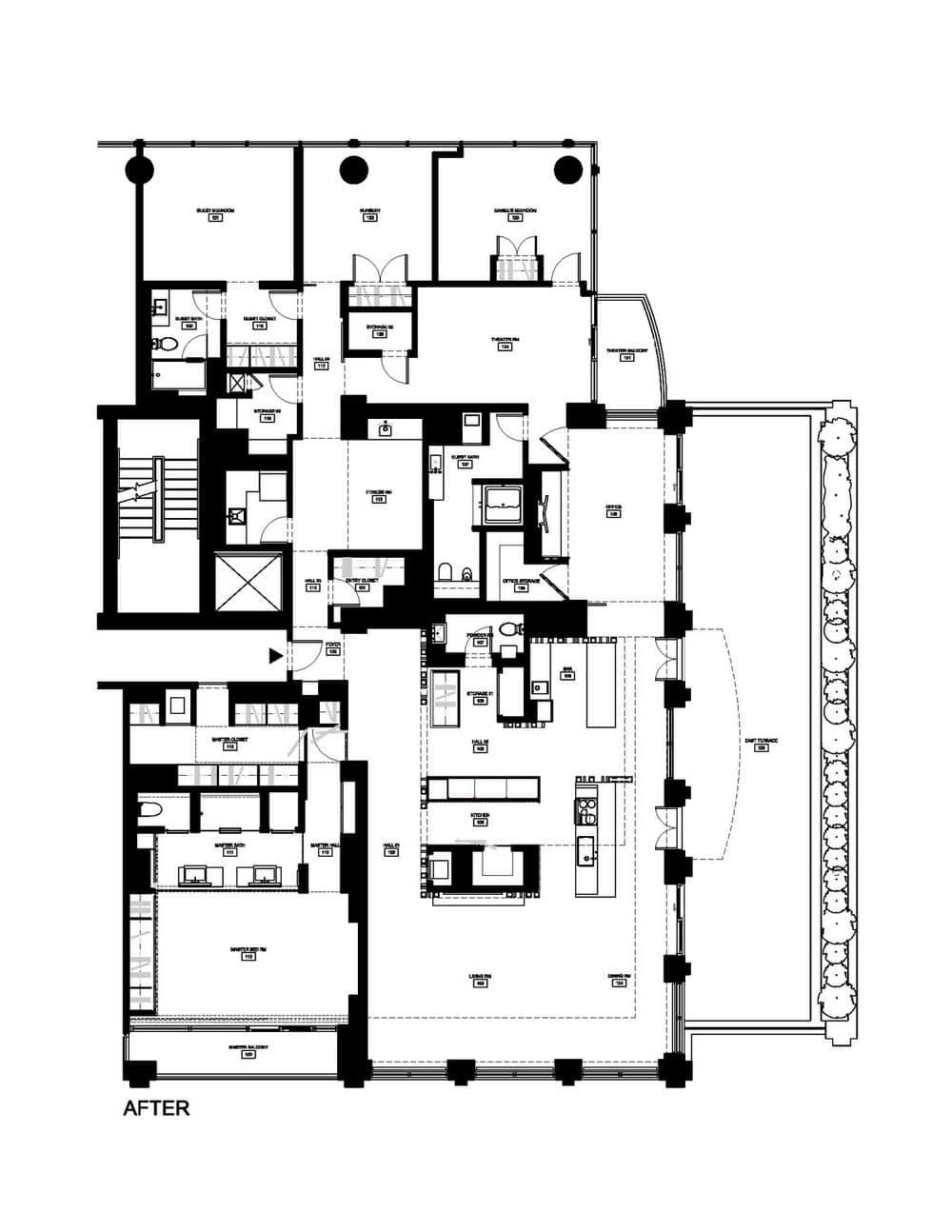 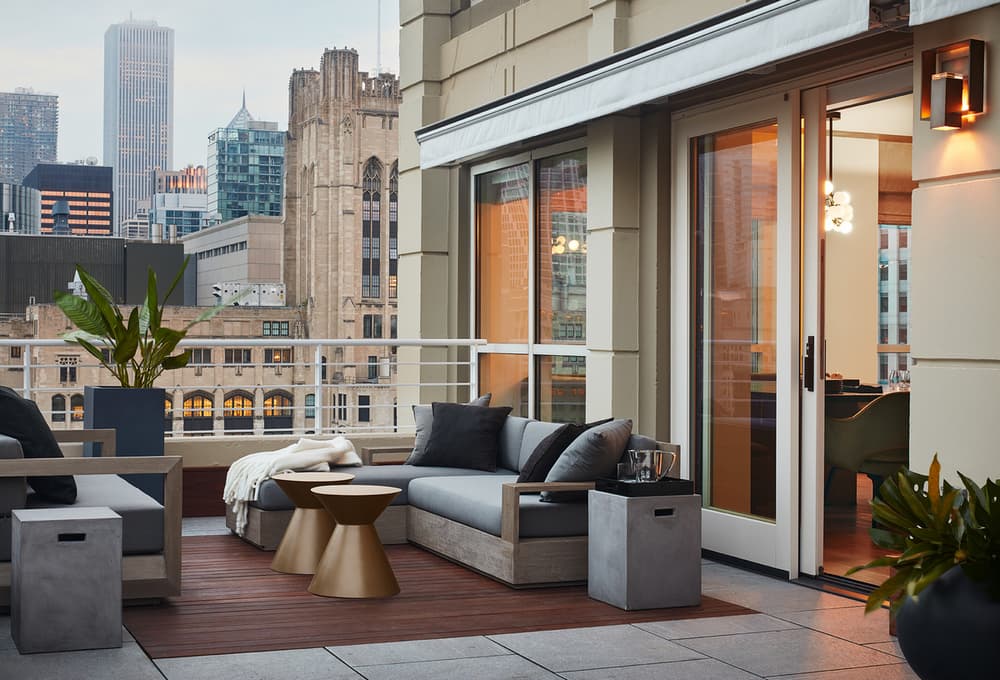 The living/dining areas, kitchen, bar, and study all open directly to the 900 square foot terrace. New openings were cut for sets of French doors that maximize the openness between inside and out. The grandiose scale of the terrace is broken down into three distinct zones. A circle of low lounge chairs sits outside the study. Opening off of the bar and kitchen are a collection of tables and chairs that can be spread out for large scale entertaining or clustered together for family style meals. The living/dining area extends outside at the south end of the terrace with a stunning view of the park below and the lake to the east. 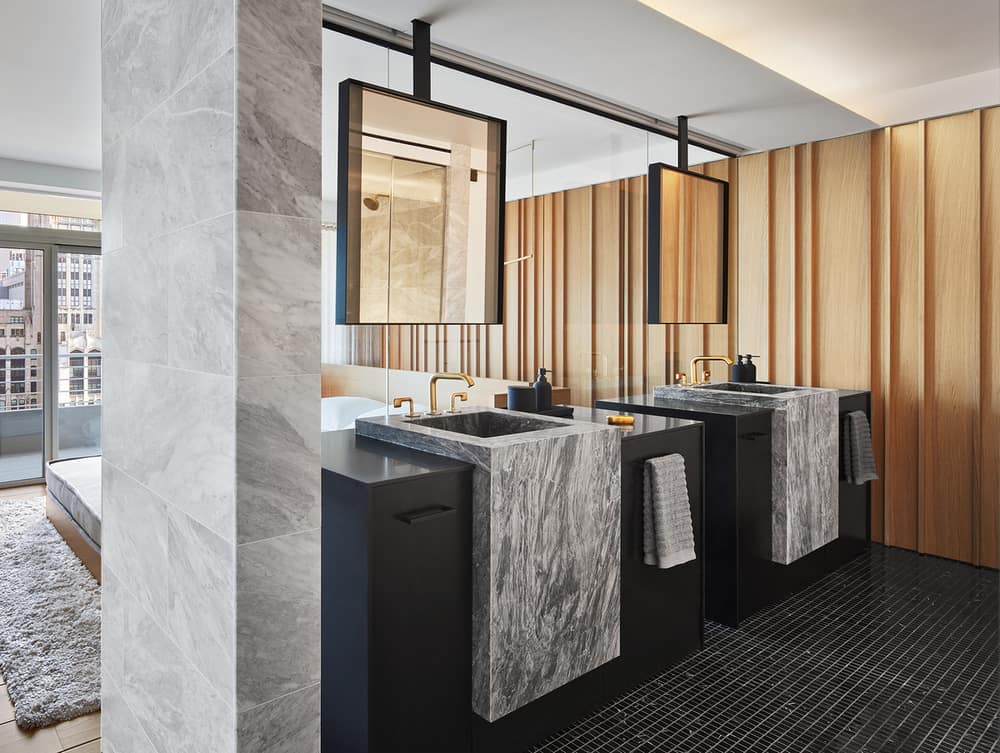 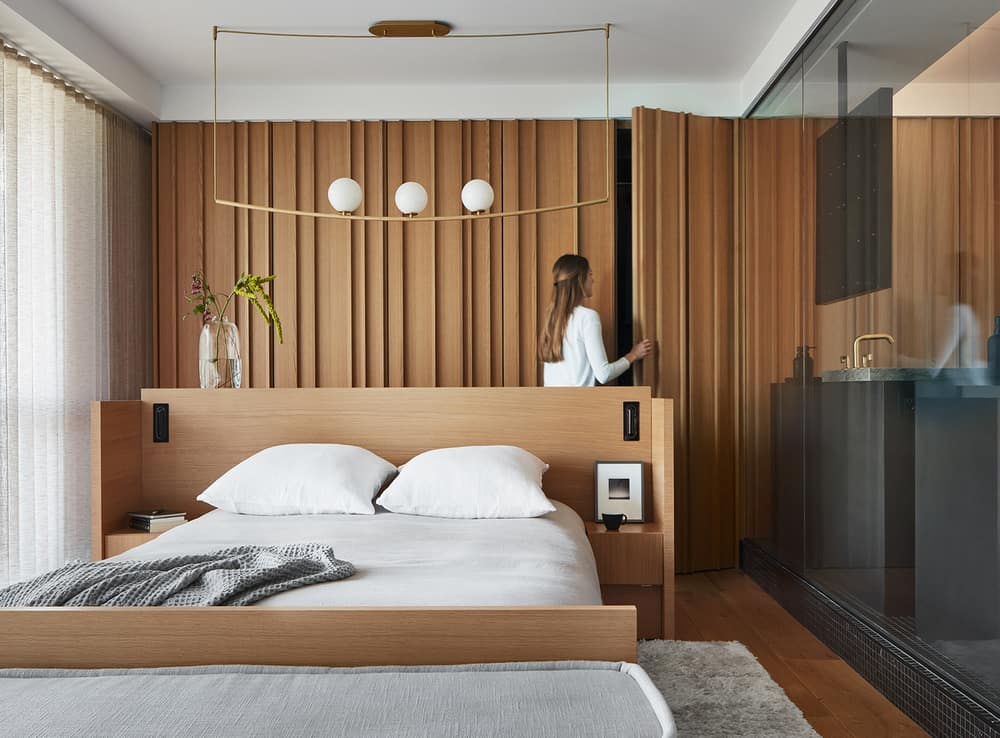 At the opposite end of the Pearson apartment from the terrace is the master suite. Here too fixed common building elements resulted in distinctive spaces. Two former secondary bedrooms were refashioned into the master bedroom. While generously scaled the room is unusually proportioned, more than double in one direction than the other. That shape inspired the custom designed bed/bench/nightstand/ headboard/shelving assembly that floats in the center of the room. The west end of the bedroom is lined with closets hidden behind oak doors faced with randomly spaced battens. 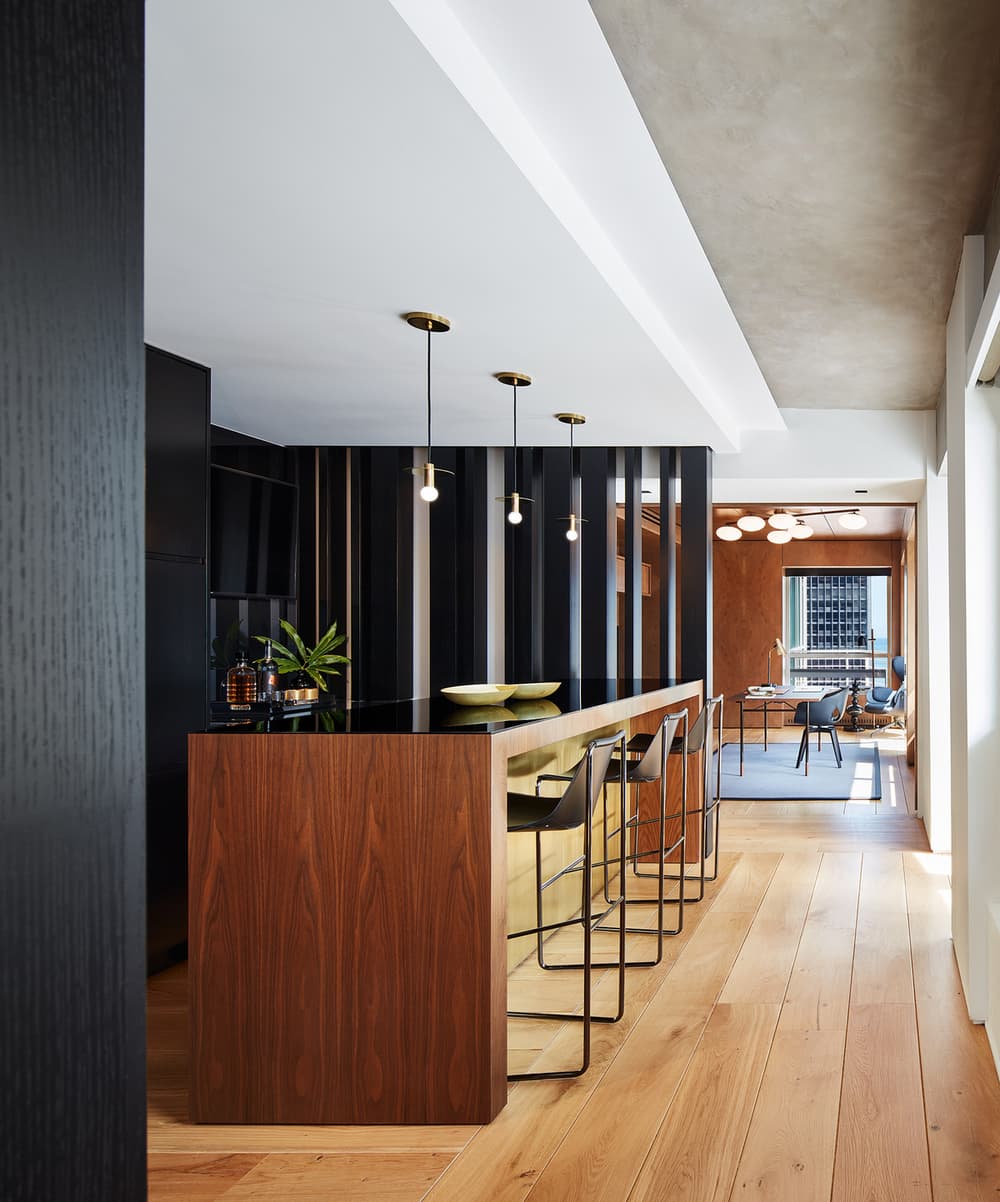 Lacking any direct natural light, the master bath also demanded an unconventional design. Its pair of freestanding vanities, each outfitted with a ceiling hung mirror, sit behind a wall of glass. A concealed motorized shade is used when privacy is required. Otherwise the view remains open across the bedroom to the skyline beyond. 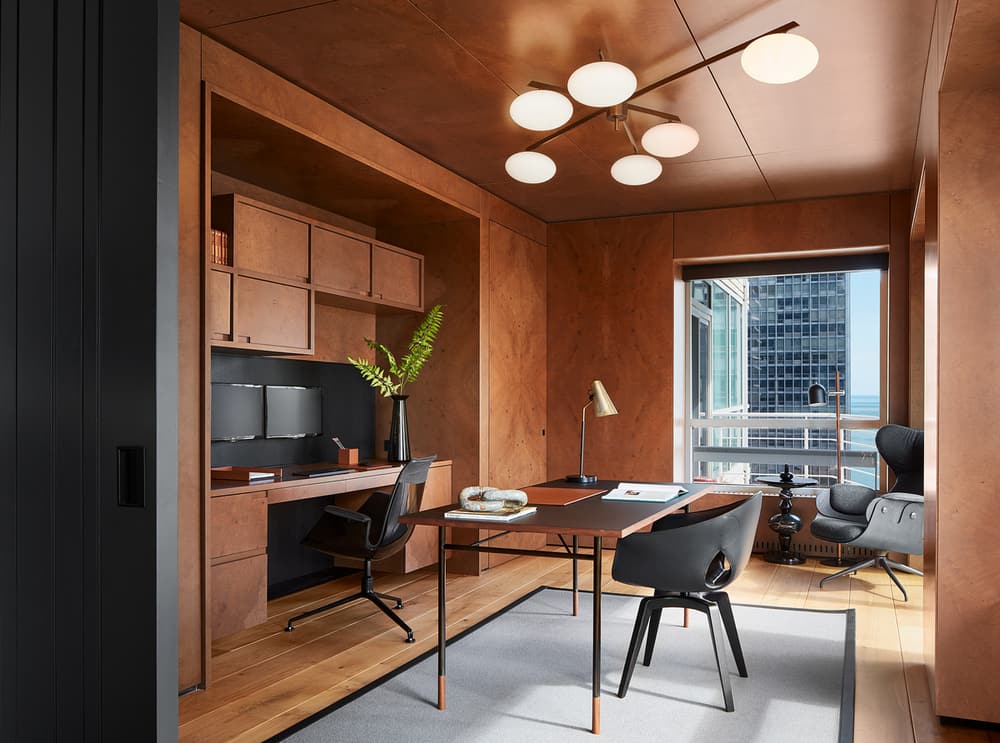 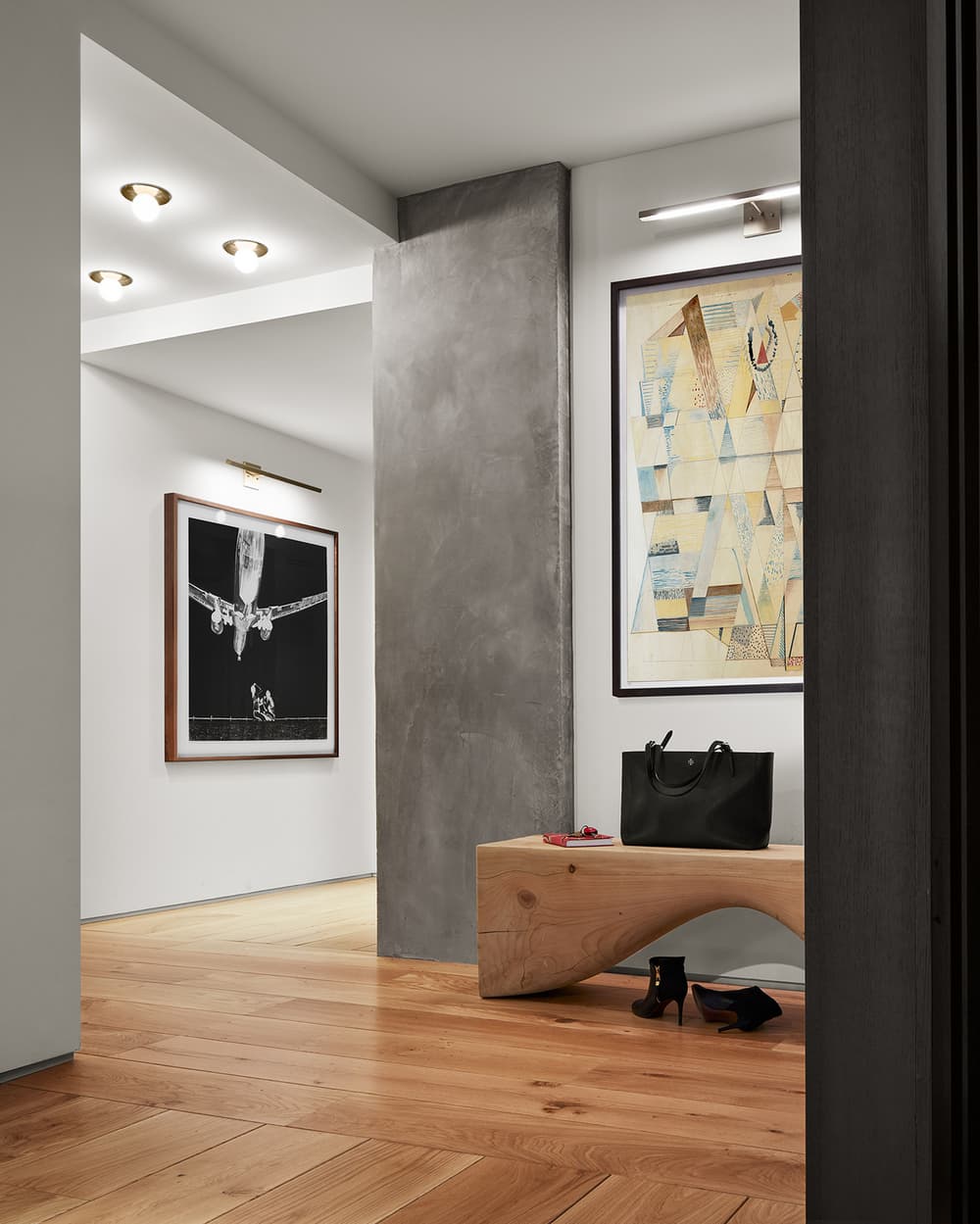 Kabinett Apartment – Conversion of a Former Manufacturing Workshop in Paris

BLVD International was commissioned by Indigo, skipping over the elapse of time since immortal, to write a praise song of eternity on this beautiful land.
Read more
Furniture Design

From the moment he graduated from Honk-Ik University in 1992, Jaehyo Lee has won recognition both in Korea and internationally through his works that...
Read more
Renovation Projects

The brief for the Hall project was to retain as much of the notable original features; vaulted timber lined roof, gothic arched doors. The simplicity of the space provided for a sympathetic open plan living area
Read more
Ganna Studio

Completed in 2016, Apartment V is a private home located in Xindian, New Taipei City, Taiwan. The project was designed in 2016 by Ganna Design. From...
Read more
Apartments

This white house is located in a community that is far away from the downtown and rural area. Here we can see a large farmland and a branch of Han River outside the window. In terms of design, our philosophy is to create a minimalist white house with the simplicity and purity of black, white and gray,...
Read more

Architectural Rendering of Apartments in Lisbon / Berga and Gonzalez Architects

The Apartment of Carole and Robin by Les Ateliers Tristan & Sagitta

Quest Apartment with a Minimalist Design in Prague