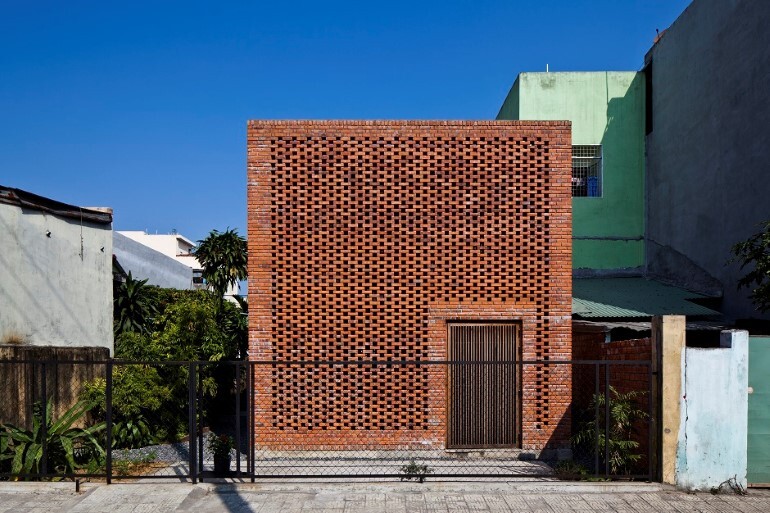 Termitary House was designed by Vietnamese studio Tropical Space. The house is built with baked bricks on an area of 80 square meters and is situated in a tropical climate zone.

Description by Ly Kha Ngo: The Termitary House was built in Da Nang, a central coastal city of Viet Nam. The climate in this area is rather extreme in the way it varies significantly between the sunny season and the rainy one. It is also influenced by a lot of tropical storms every year. Besides, Da Nang is well-known for the remains of Champa baked-brick Towers (during the Ancient Champa Kingdom), constructed during the time from the 4th century to the late 15th century. Of all, “Mỹ Sơn” Holy land is the most well-known.

Inspired by the termites’ special ability to build their nests in the local area, the architect has designed the house with a large sharing space in the center where a cooking counter, a dining table, and an entertaining corner are found. This “lobby” then leads to different functional areas in the house such as the rest room, the living room, and the bedrooms. All are connected artistically and comfortably. The mezzanine is where another bedroom, an altar room, and a small library are found.

The attic is an open relaxing area with curtains of vines. Designed for three people, the house does not need a lot of partitions except the ones for the altar room and the bedrooms. Meanwhile, in the sharing areas in the house, the family members can still see and chat to each other through the walls with holes arranged as randomly but scientifically as in an actual termitary.

The house is mainly built with baked bricks which are also a traditional material in the local area. They are the very material to have been used for the construction of the mysterious ancient Champa towers. The ceilings are casted with original concrete, and the floors are covered with terrazzo in dark colors. All furniture is made with the timber from the roof of the old house, which helps make the total actual cost of the construction a significant saving (about under 22,000 usd) 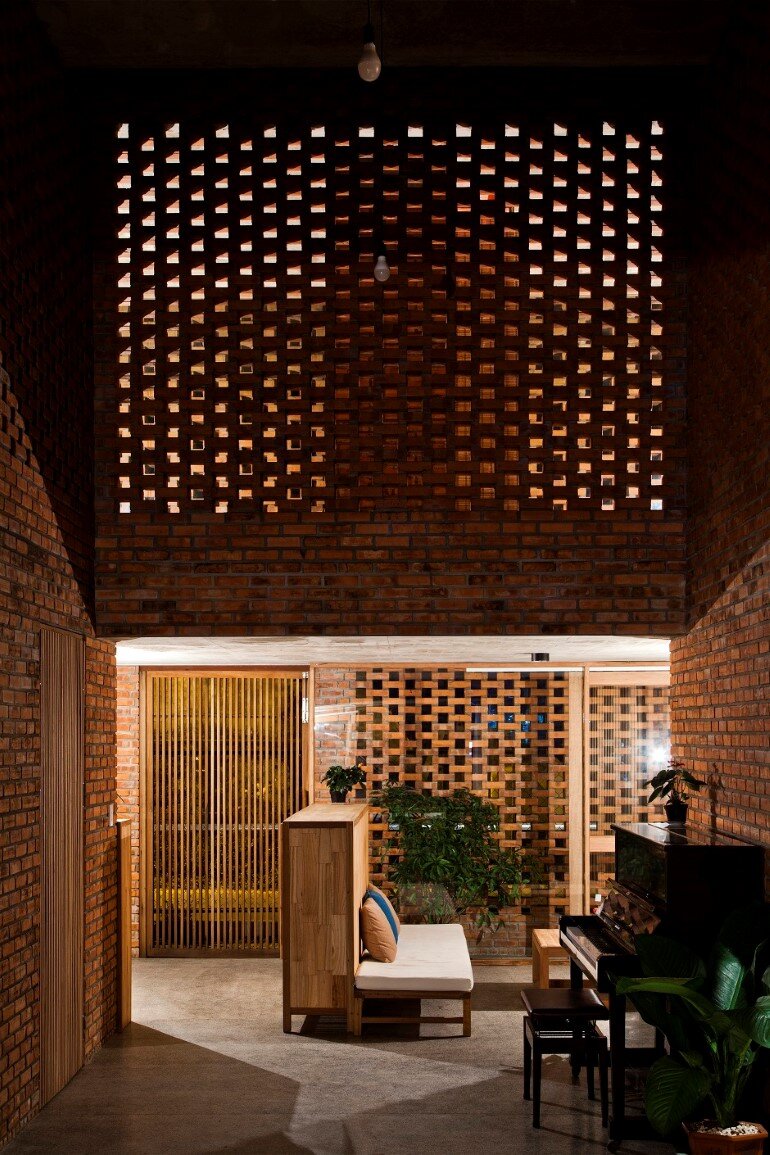 That the walls are entirely built with baked bricks makes the house cool in the summer; for this kind of bricks can function as a certain factor to keep the humidity for the entire house. The special constructing technique of “double skins” with two layers of one brick wall covering outside and one glass-aluminum frame inside creates a space within a wall, which functions as a buffer layer at both gables. 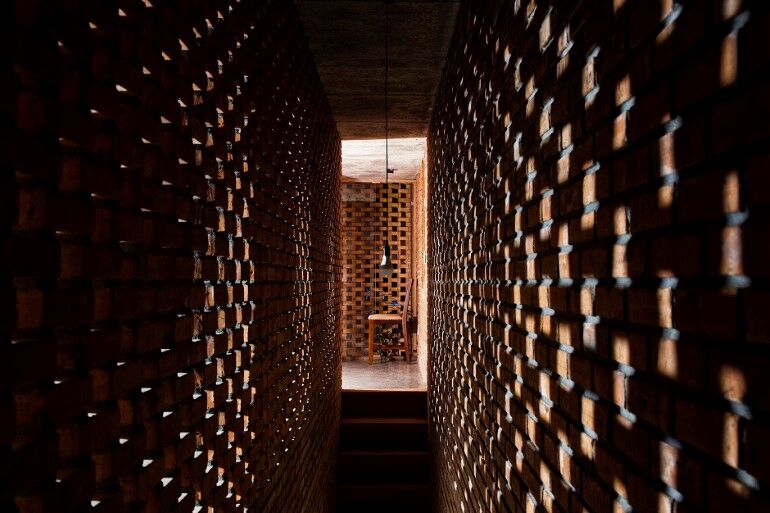 Besides, the arrangement of the toilets and the storage rooms along the walls not only helps block the strong winds during the stormy season but also leads them towards and through the gaps straight to the roof. This is due to the remarkable difference in pressure. On the roof, architects use a system of girders and upside down floors to create a small garden for plants – an ideal place for the whole family to relax and enjoy the breeze during the hot and muggy summer days. 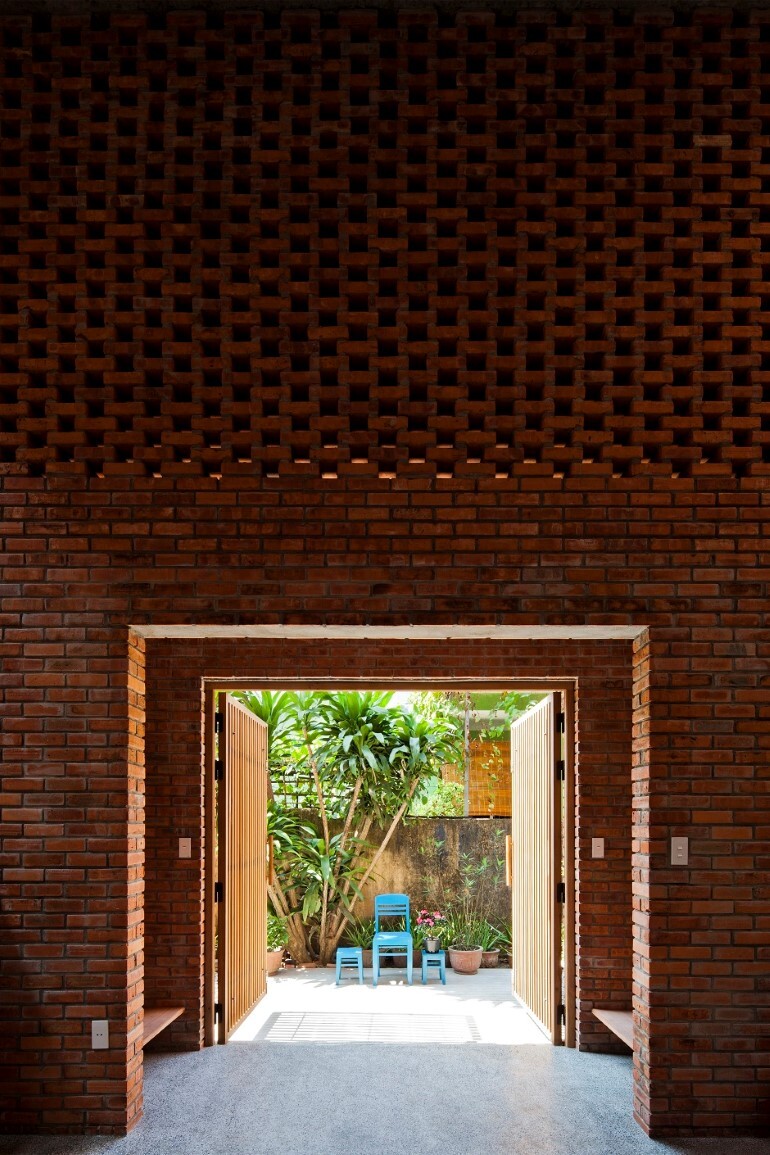 The special design of the baked-brick walls with a lot of holes, together with the large inter-floor space, allows breeze and light to get to all the corners of the house, even the hardest-to-access areas. The house owners are also able to enjoy the blue sky during the daytime or the moonlight night-time from the living room, the dining table or the kitchen. 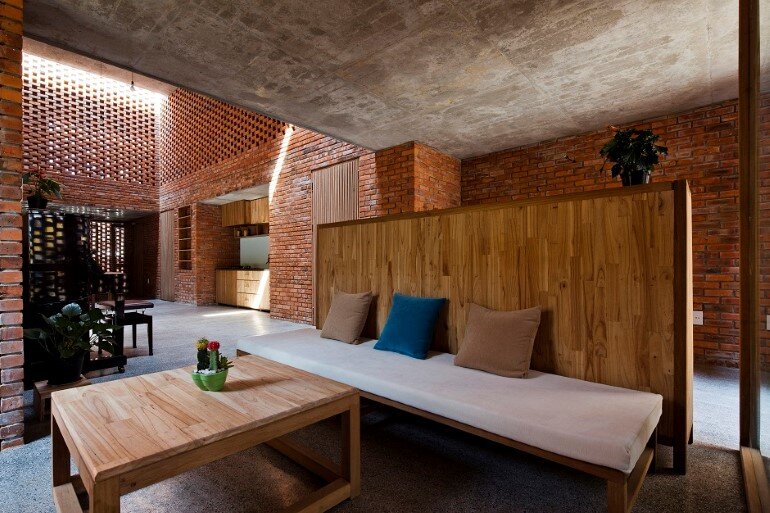 At different times during the day, the variety of the light intensity getting through the inter-floor holes makes the brick wall colors change from the light red in the morning, red at noon, dark red in the afternoon and more purple in the late afternoon and early evening. In the evening and at night, the house looks like a giant lantern with lights here and there from the holes. The surrounding brick walls are decorated with some rough bricks to make shadows. This improve the beauty and charm of every single samel-brick regarding its own shape and color. 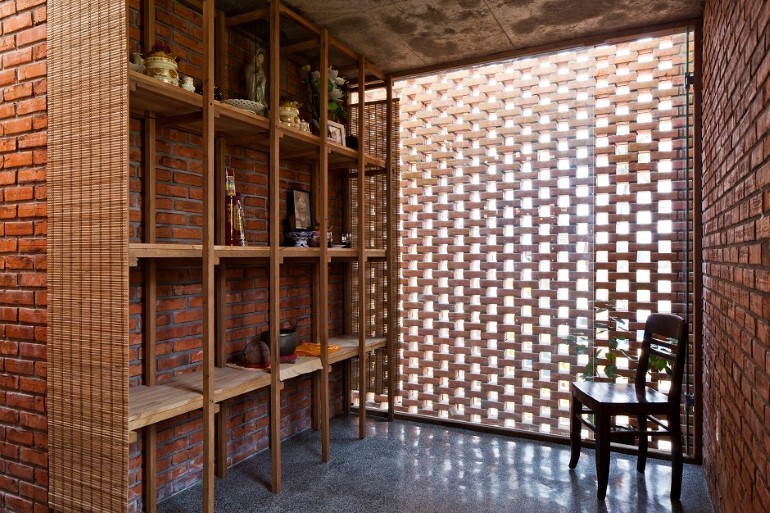 Both the yard and the garden are covered with coarse gravels with some of the plants (which are rearranged) from the old house in order to retain some familiar features for the owners. Taking the best advantage of ventilation, lighting system and natural air conditioning mechanism has made The Termitary House optimize the positive elements of an effective tropical work. 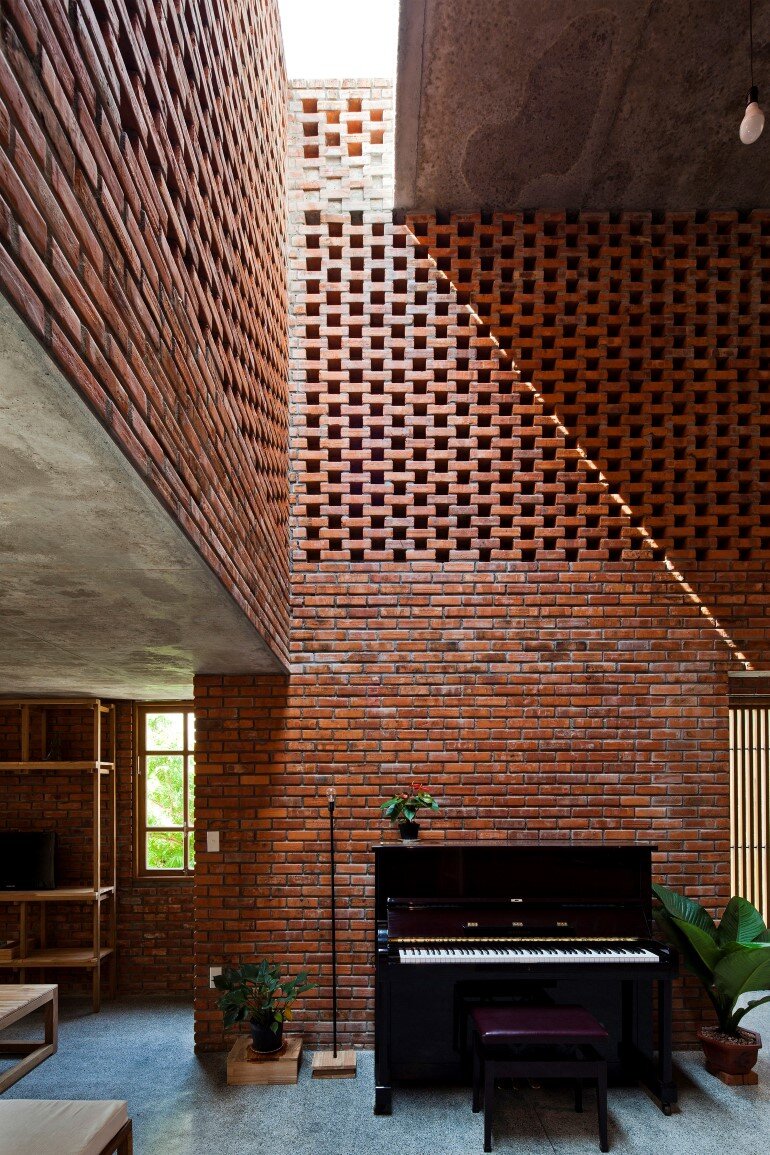 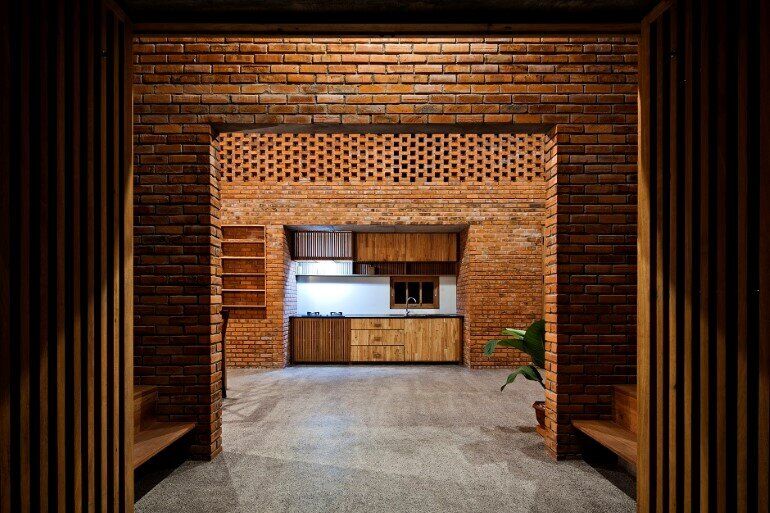 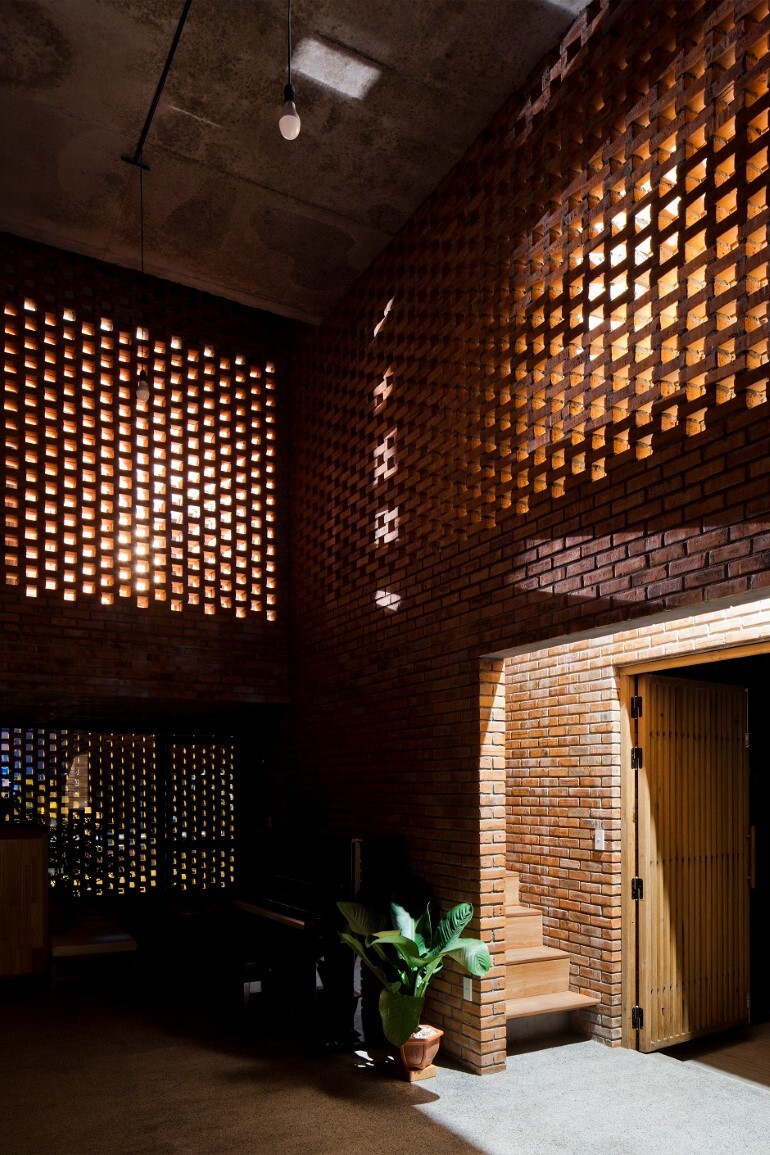 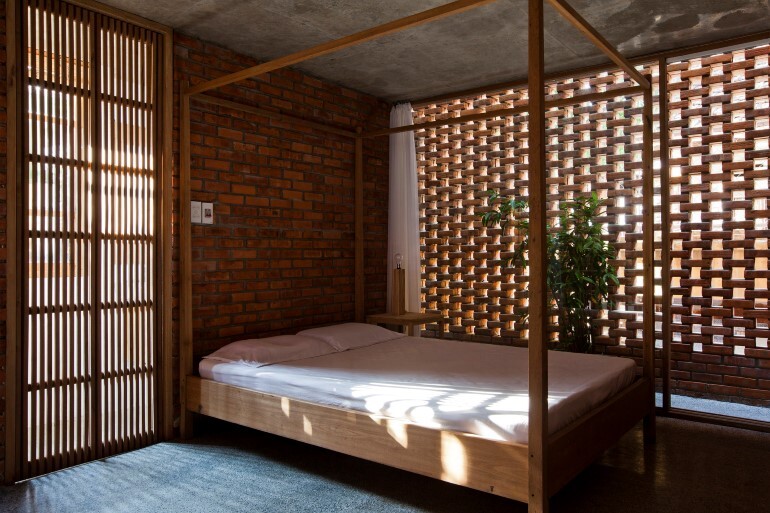 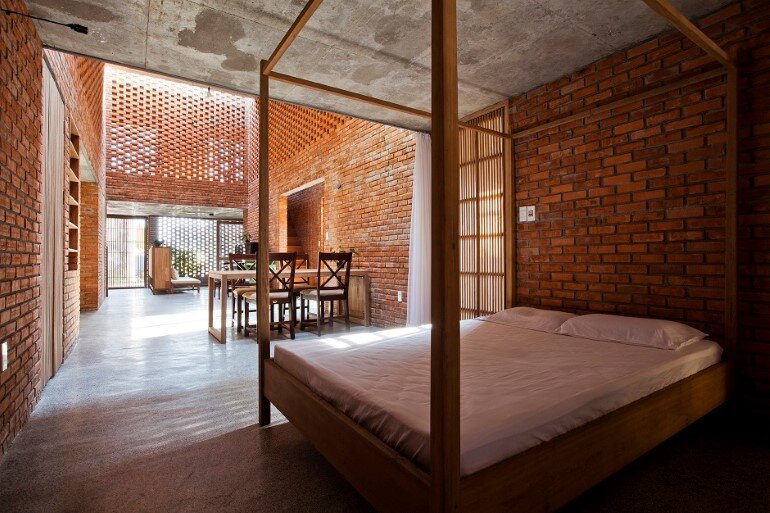 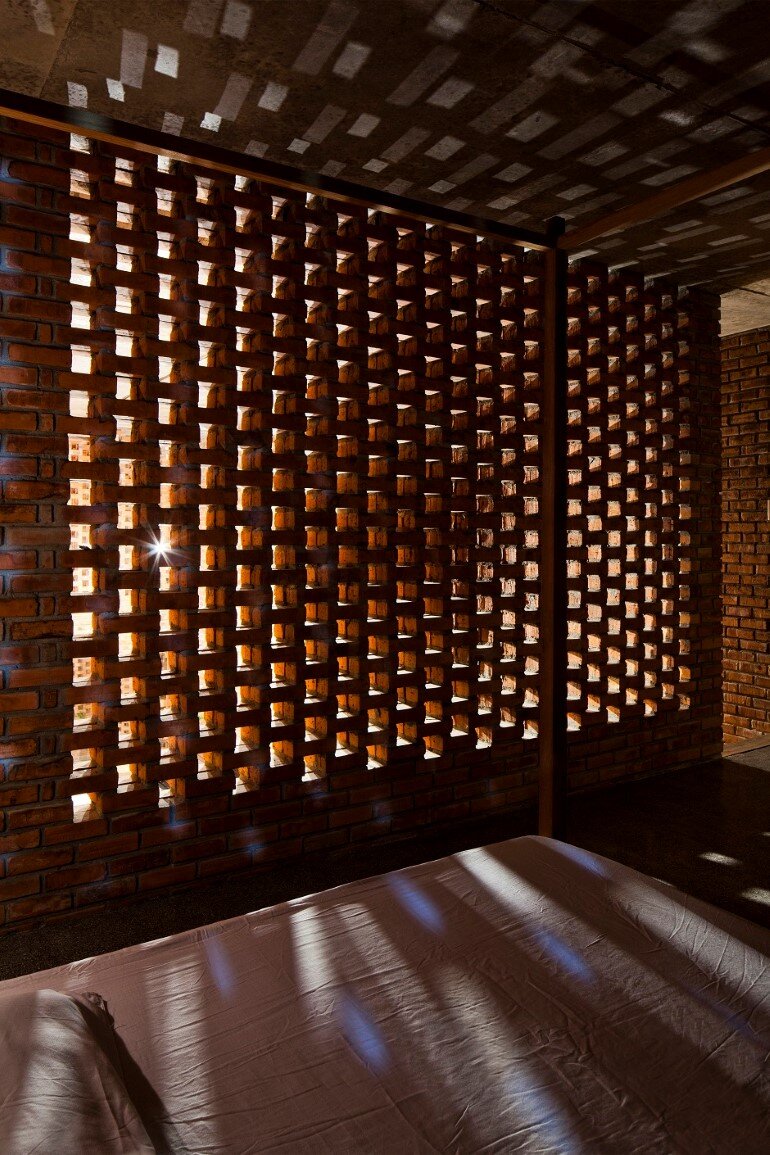 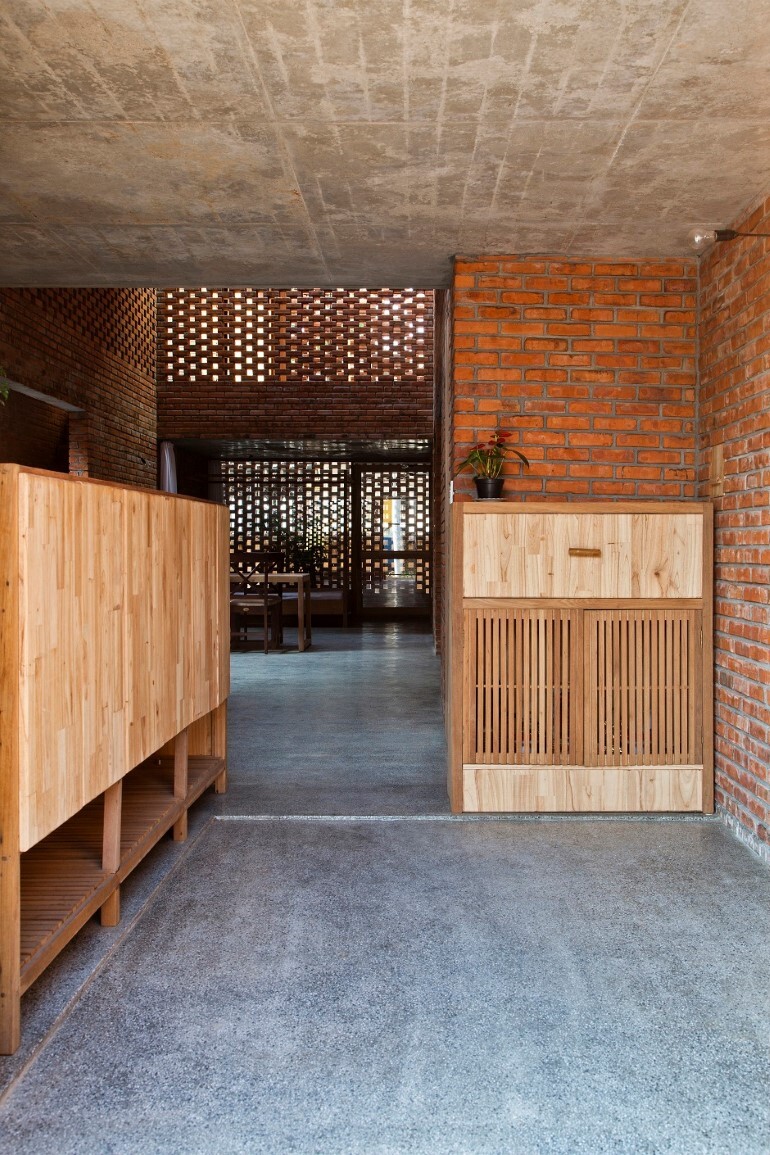 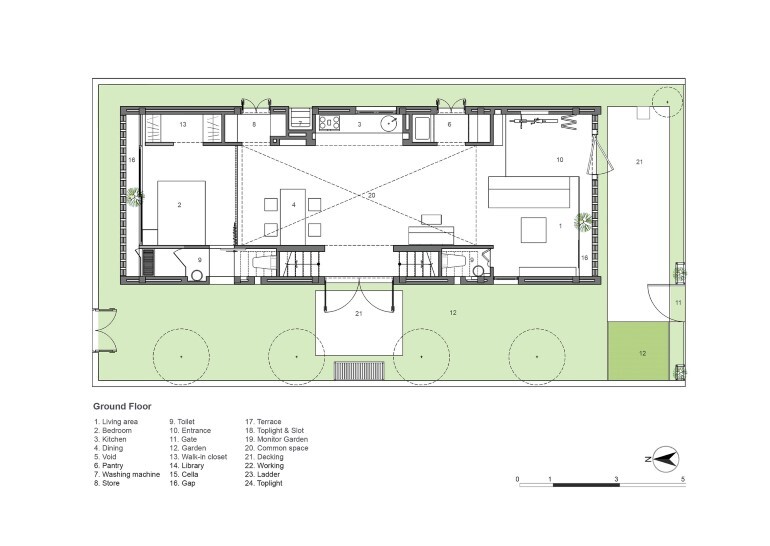