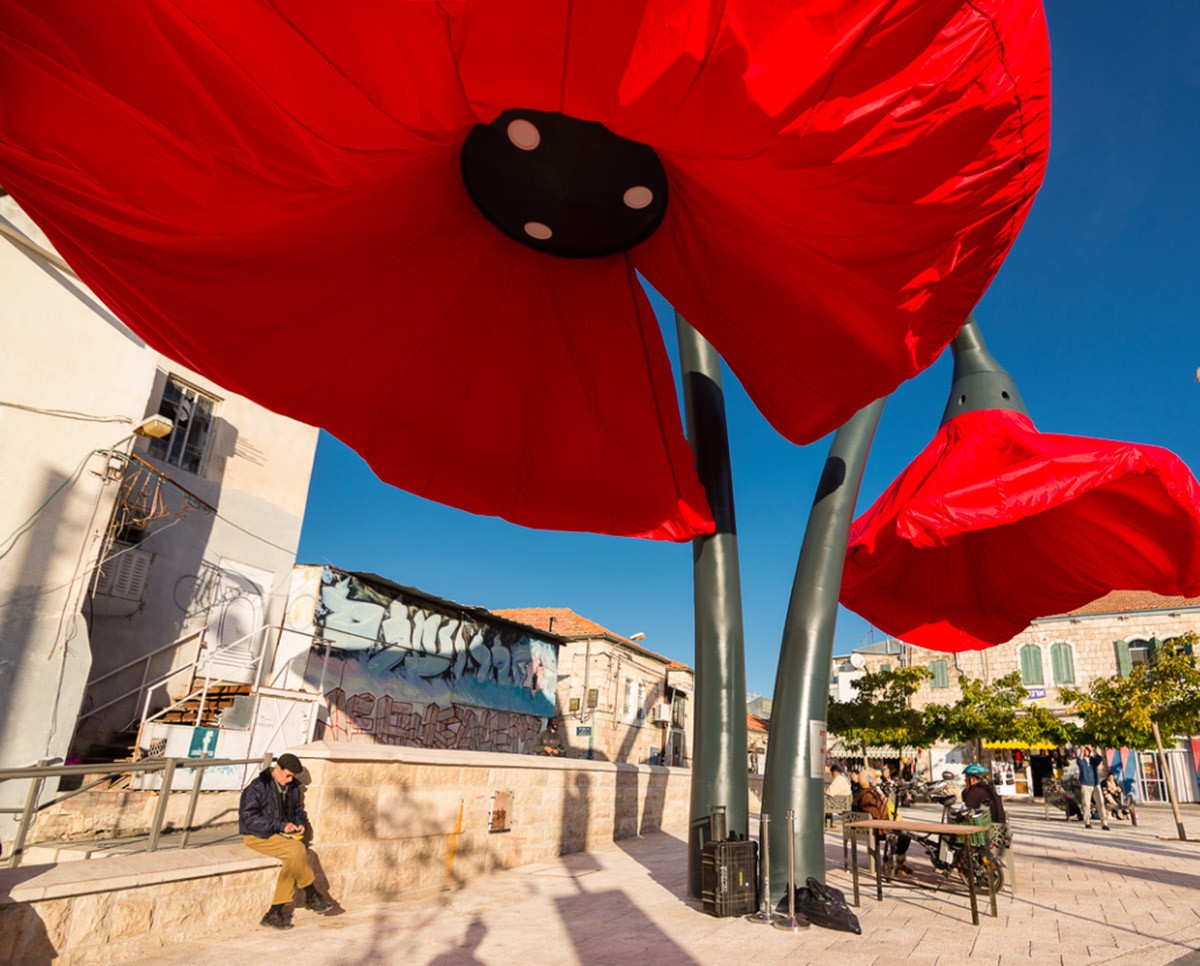 HQ Architects have designed a dynamic street installation in Vallero Square in Jerusalem. A set of giant urban flowers react to different occurrences in the square by opening up or closing down.

Description by architect: HQ Architects installs a “Warde”, a four-giant flowers and an urban installation located in Vallero Square, in the heart of Jerusalem, positioned at the entry of the main open market and a tramline station, is composed of four 30’ high and 30’ wide inflatable flowers. 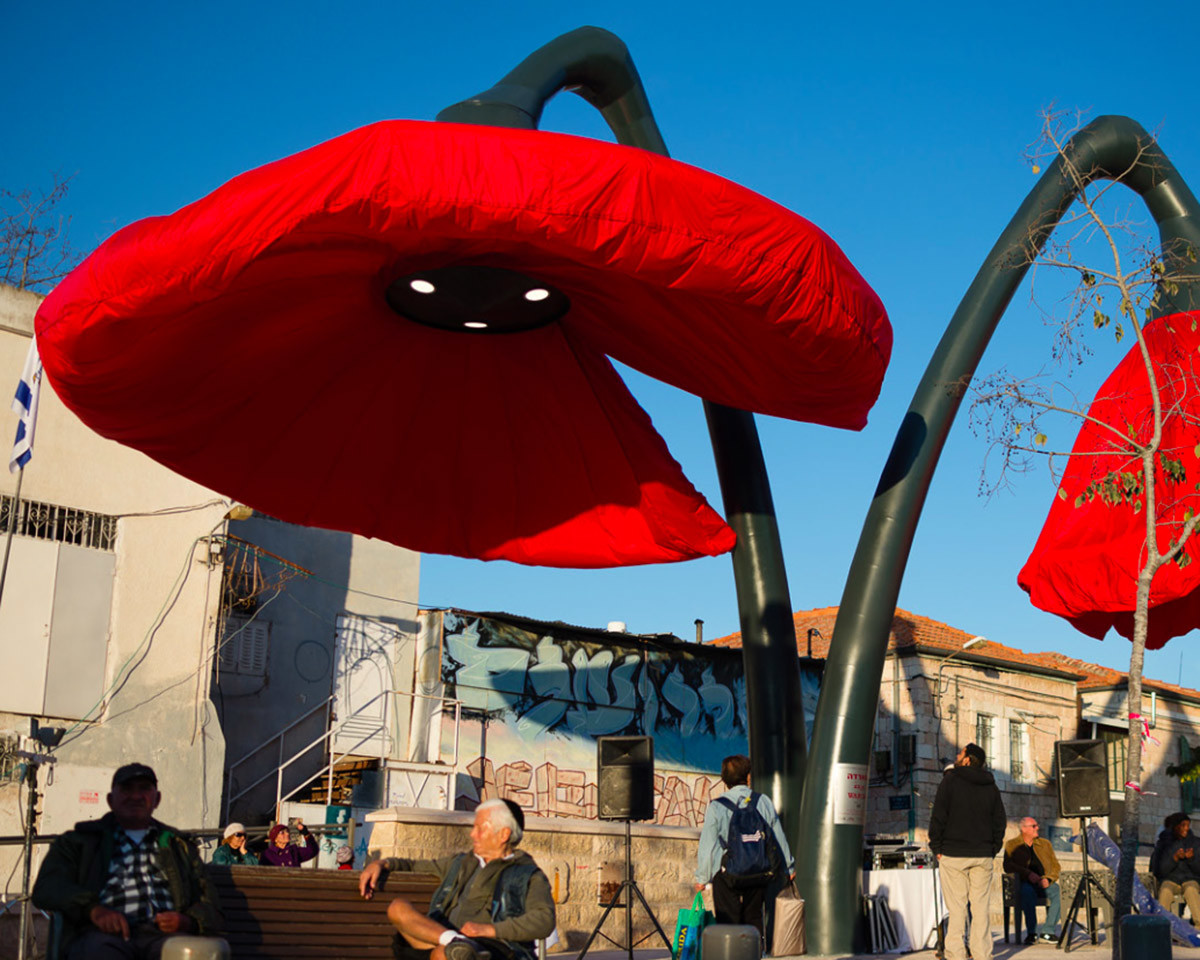 This installation is part of the municipality’s effort to improve the urban space of the city center. The existing squares in poor condition. Divided by the tram line into two urban spaces, with no supported program around them, and filled with inevitable urban facilities such as waste composters and electricity sub-station, which a patchwork of ongoing landscape attempts to fix the non-coherent environment couldn’t save. 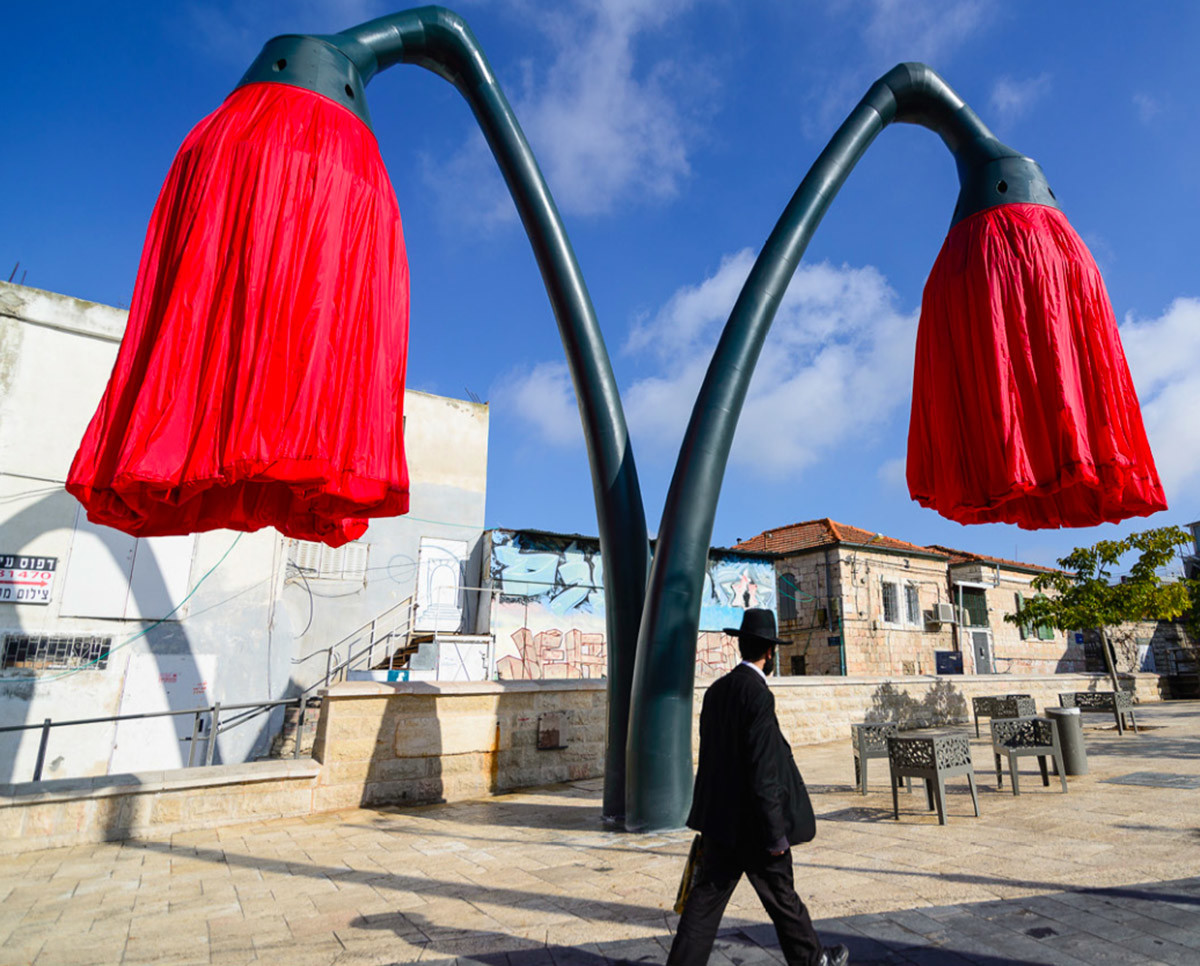 Warde’s attempt was not to fight the chaos, but instead to try and “tighten up urban space”; to spread around such fantastic elements that would overcome the reality of the square on one-hand, and will be able to stand for themselves in the non-realistic situation of Jerusalem on the other. 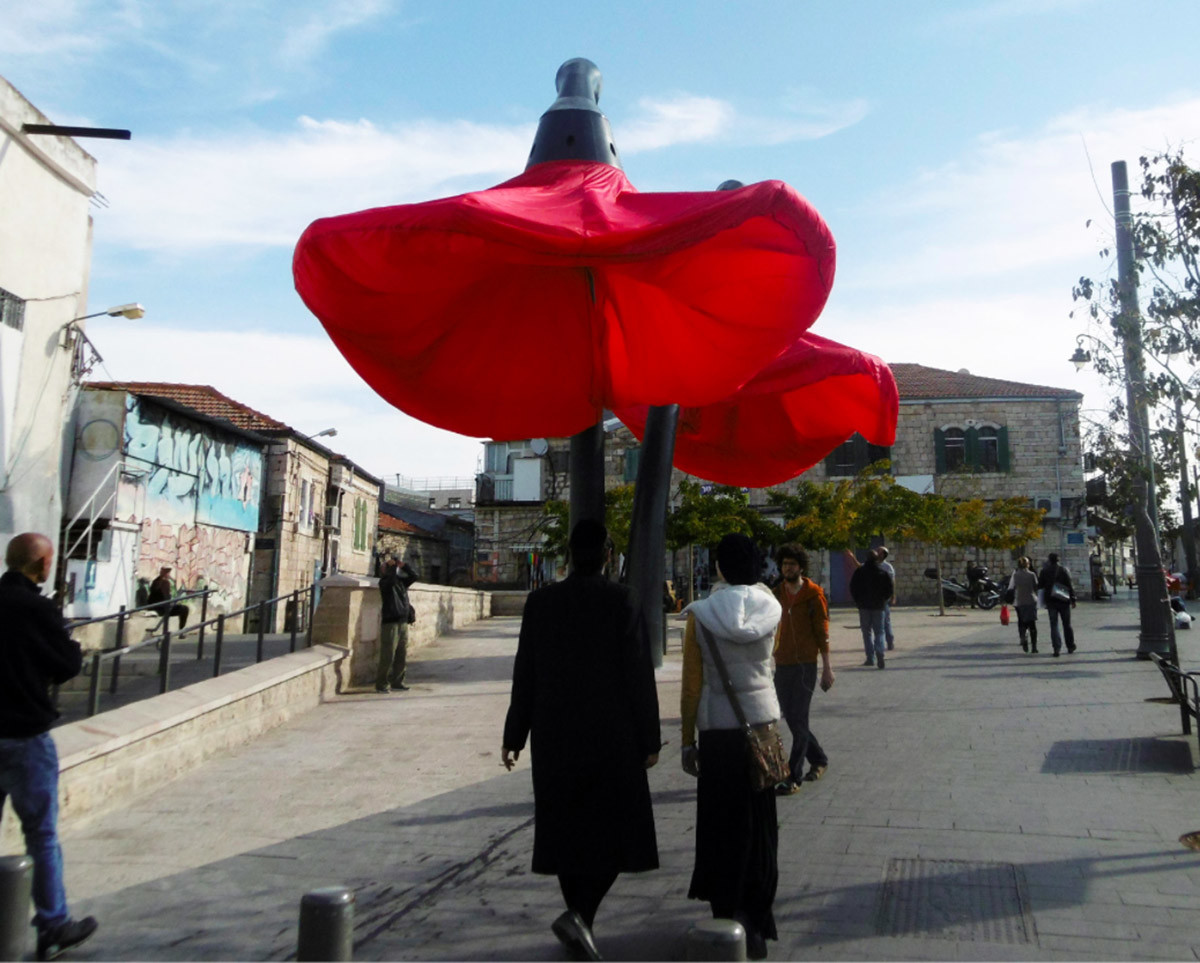 Four giants flowers were carefully positioned to be viewed from all around the square and from the market near by, each is separately inflated and reacts to the situation around it, so that whenever pedestrians walk by, the flowers inflate and open up, and then deflate and close as the people walk away. 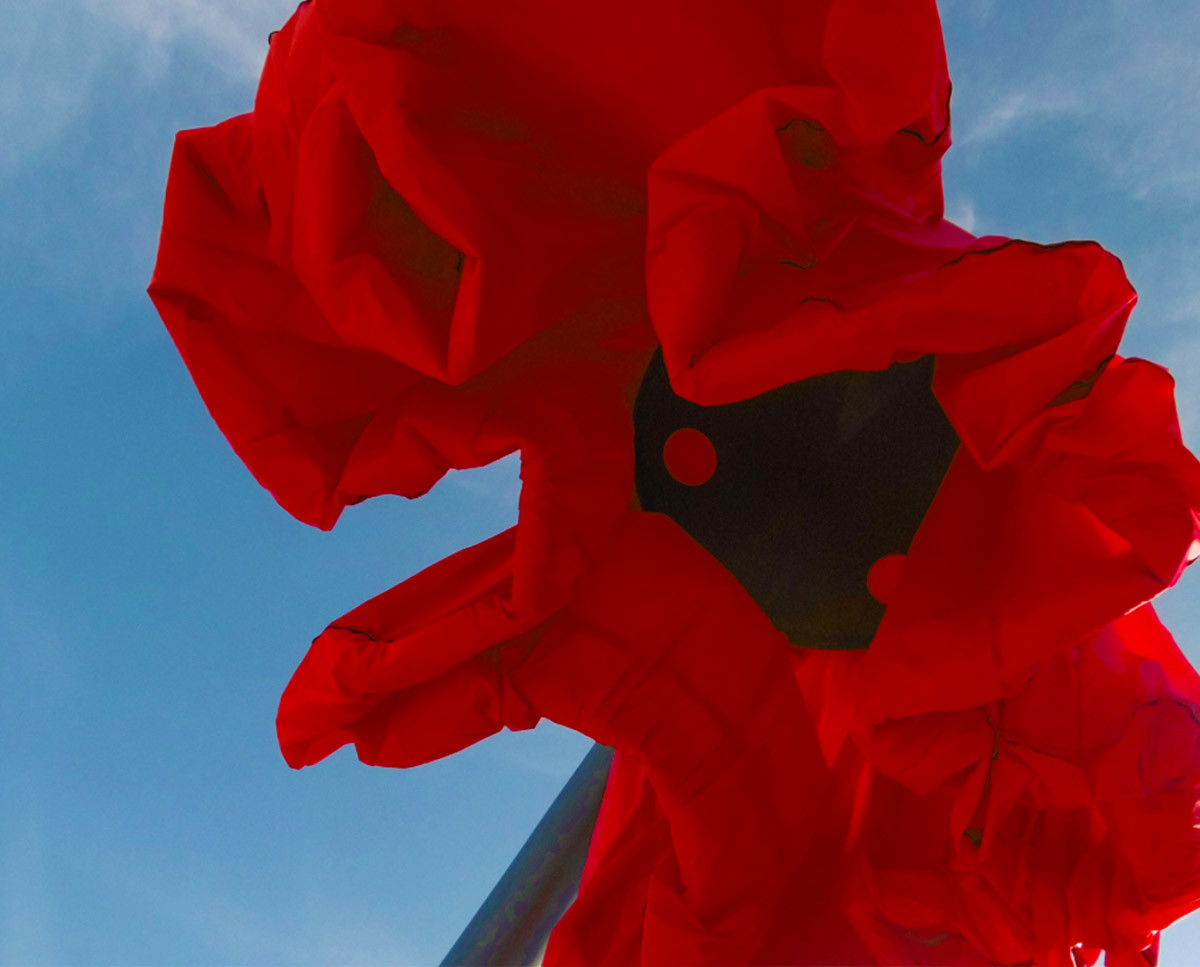 If a by-passer is looking for a moment of shade during the hot summer days, the flower will inflate and stay open until the person leaves. When the tram is approaching the station – all four flowers will inflate at once and signal the shoppers to hurry if they want to catch the tram. 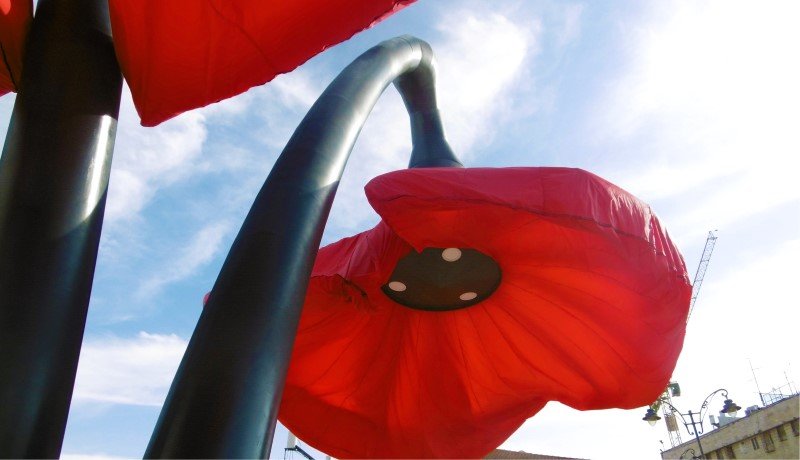 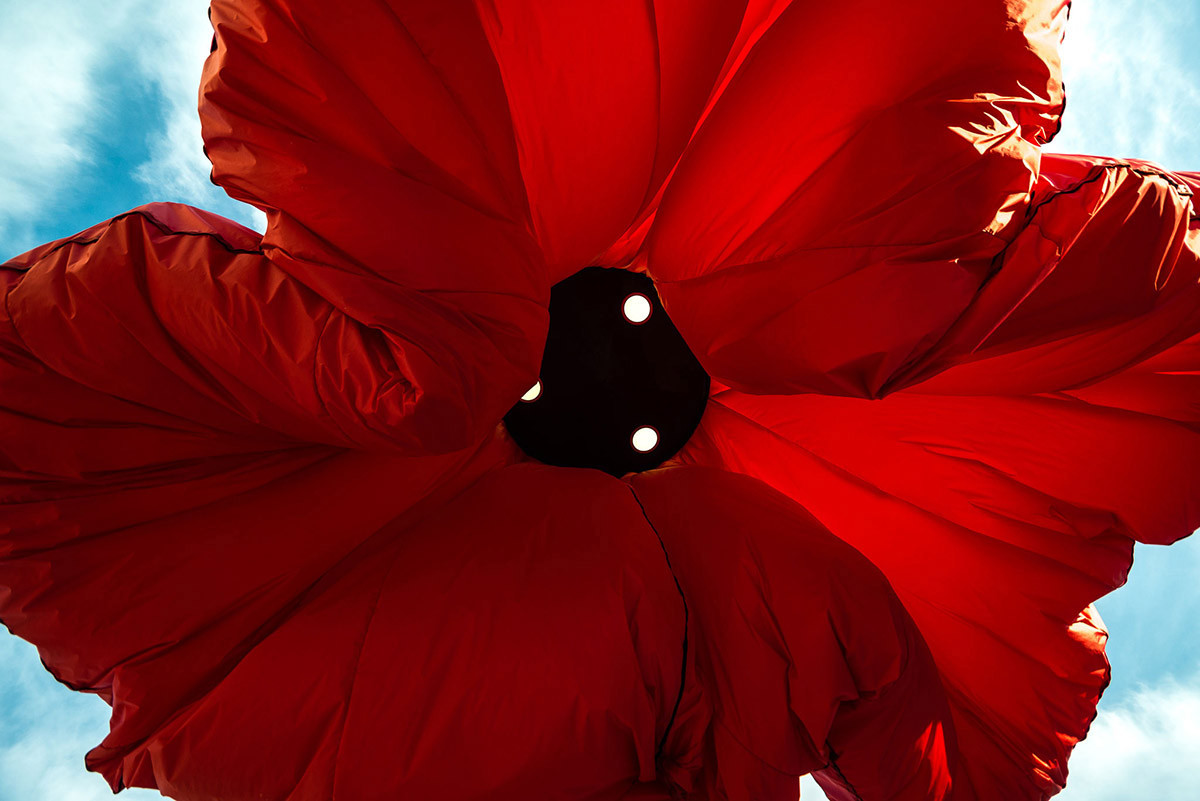 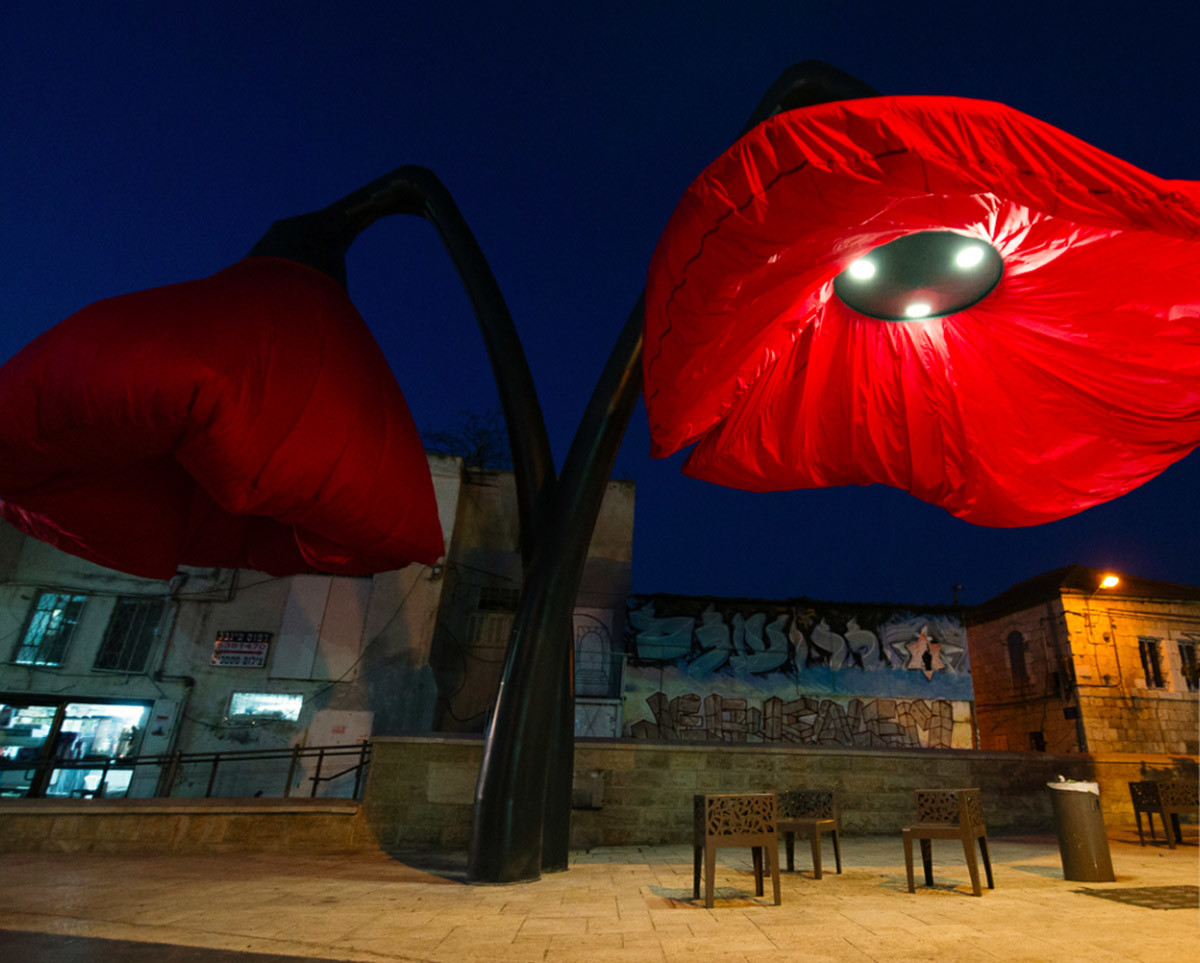 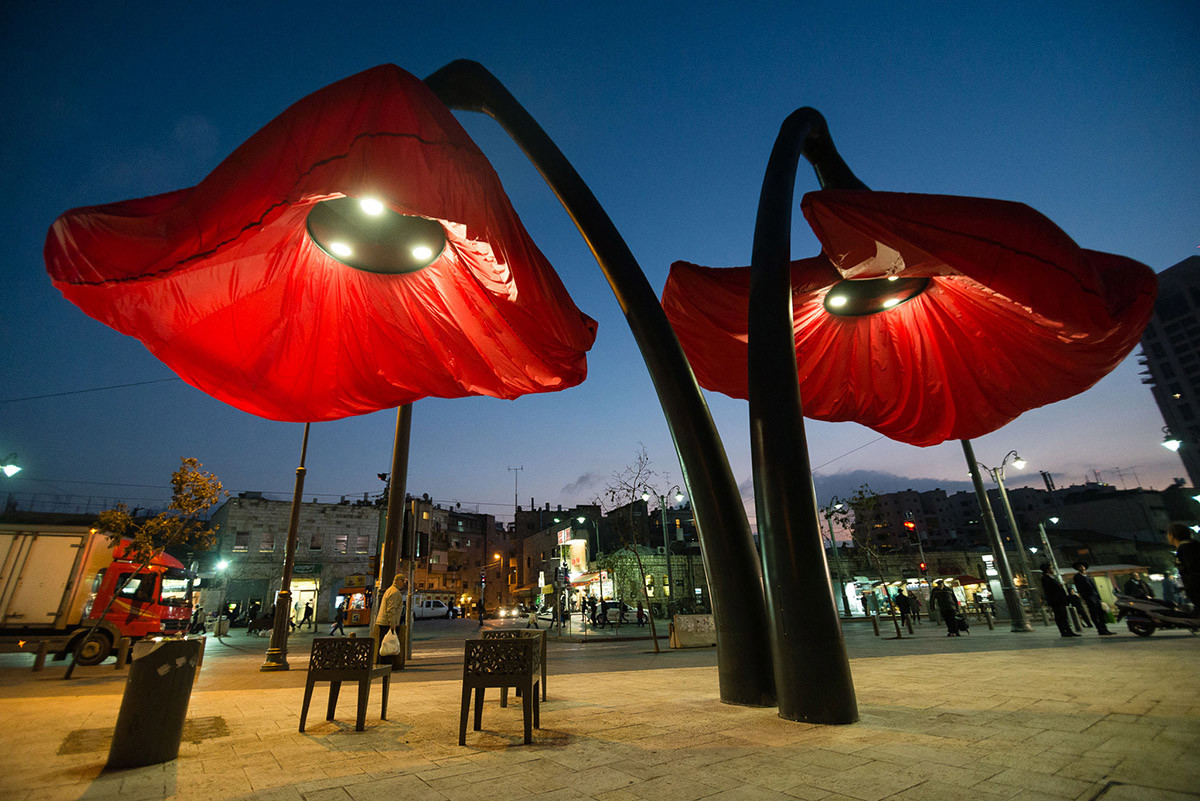 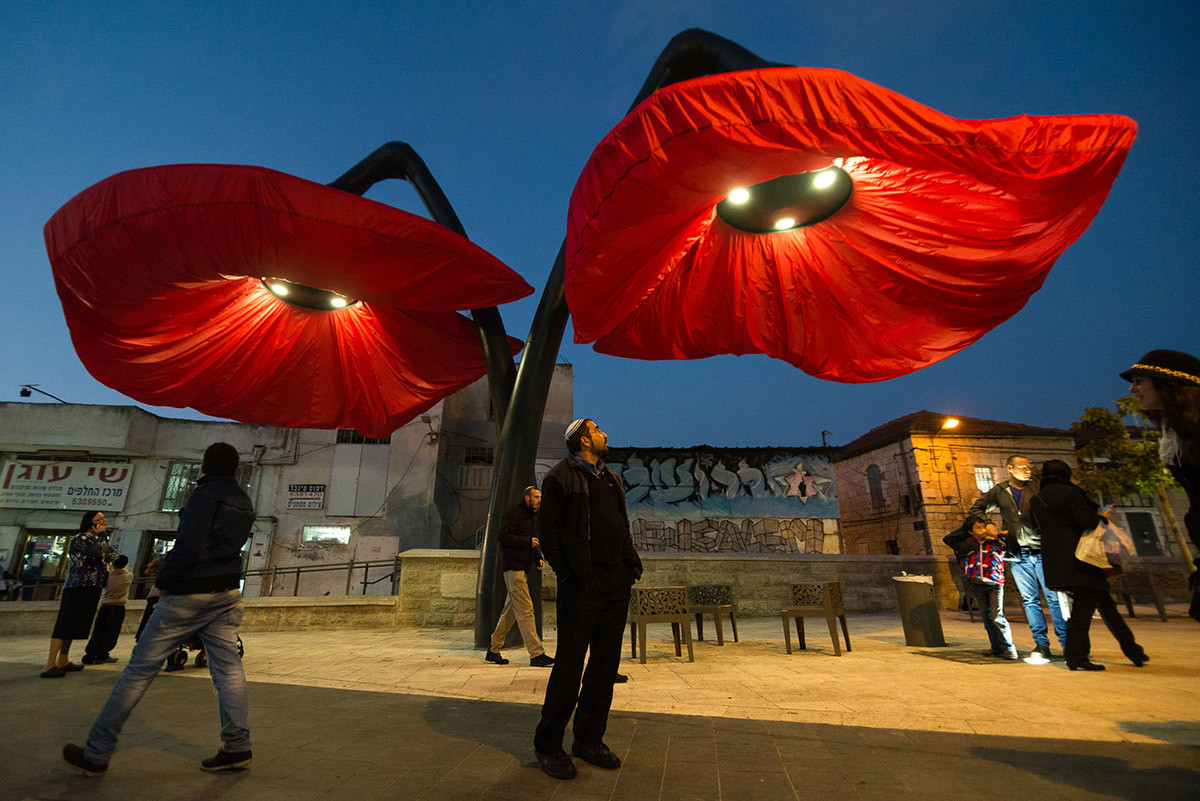 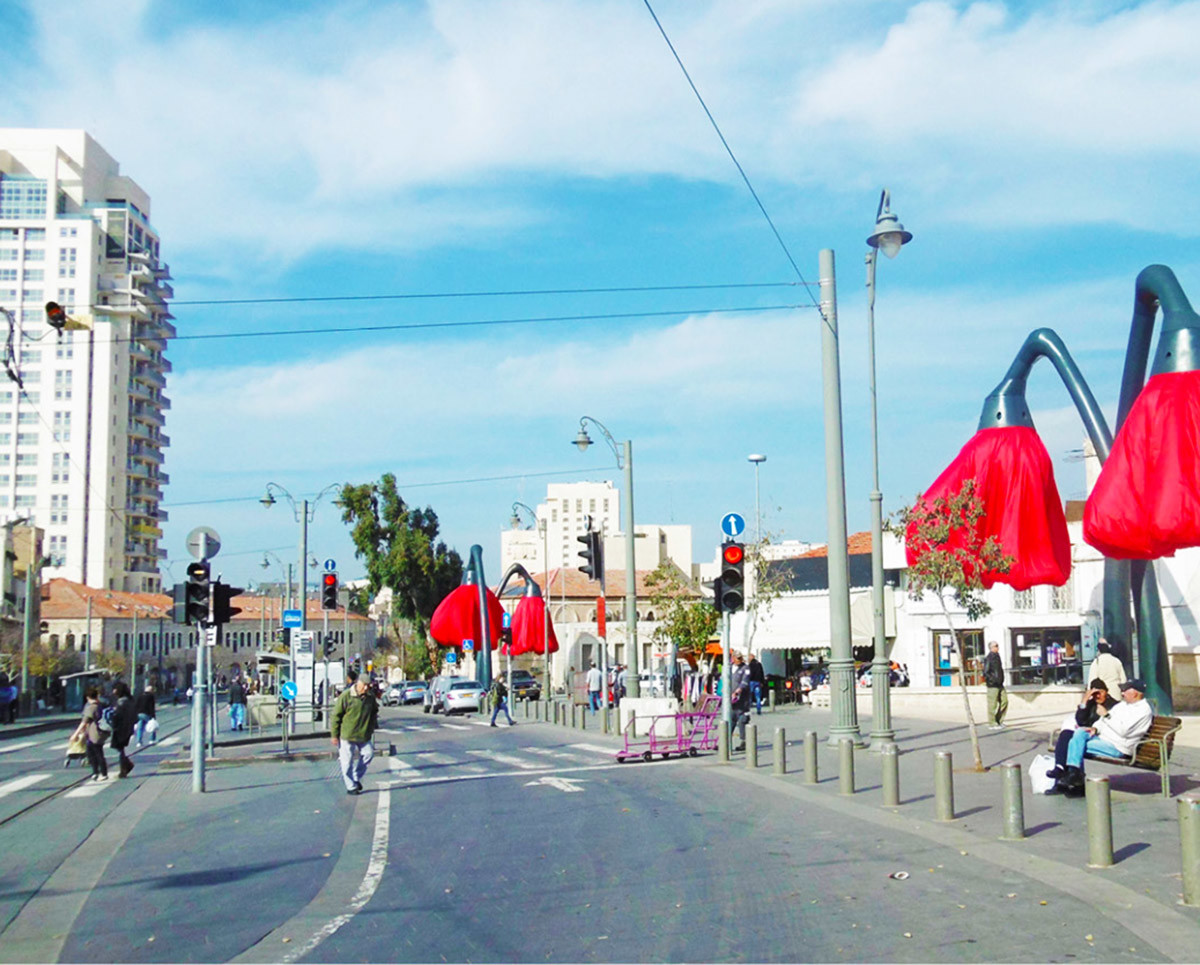 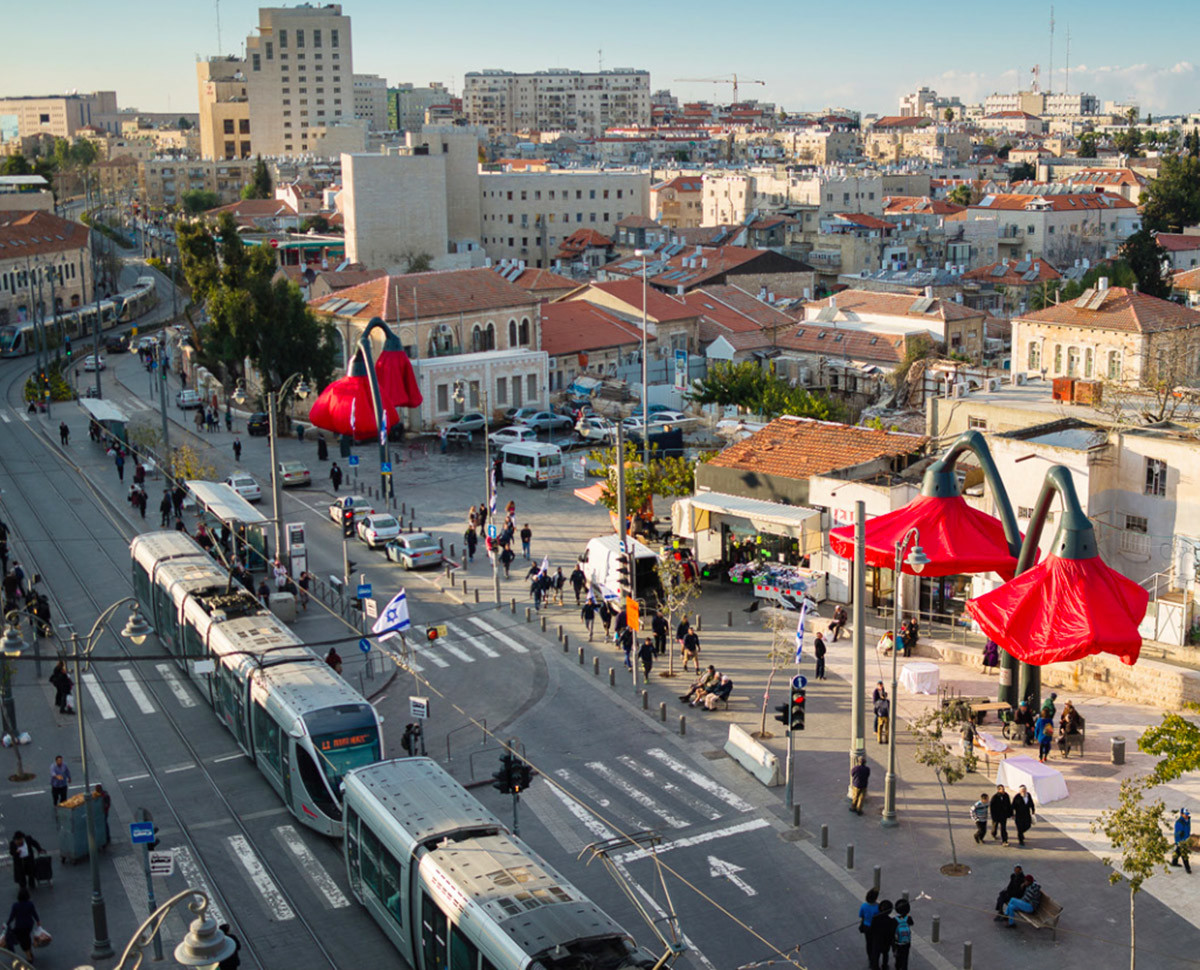 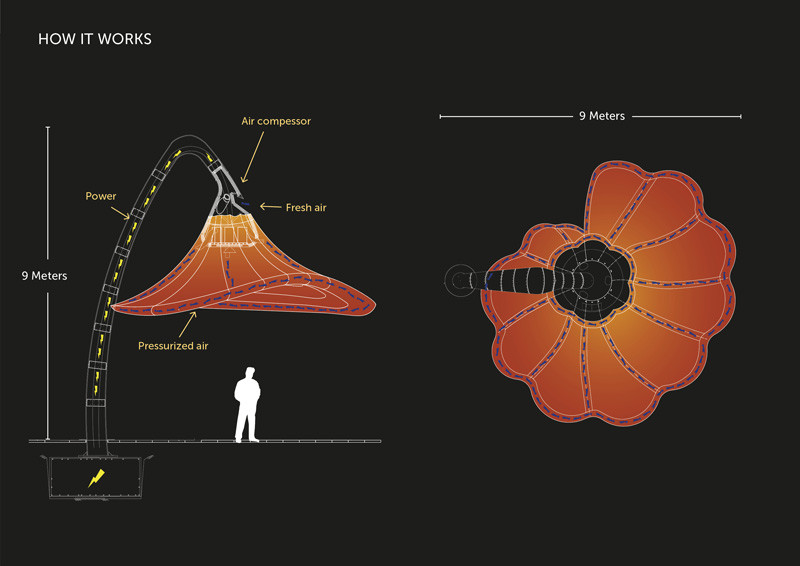 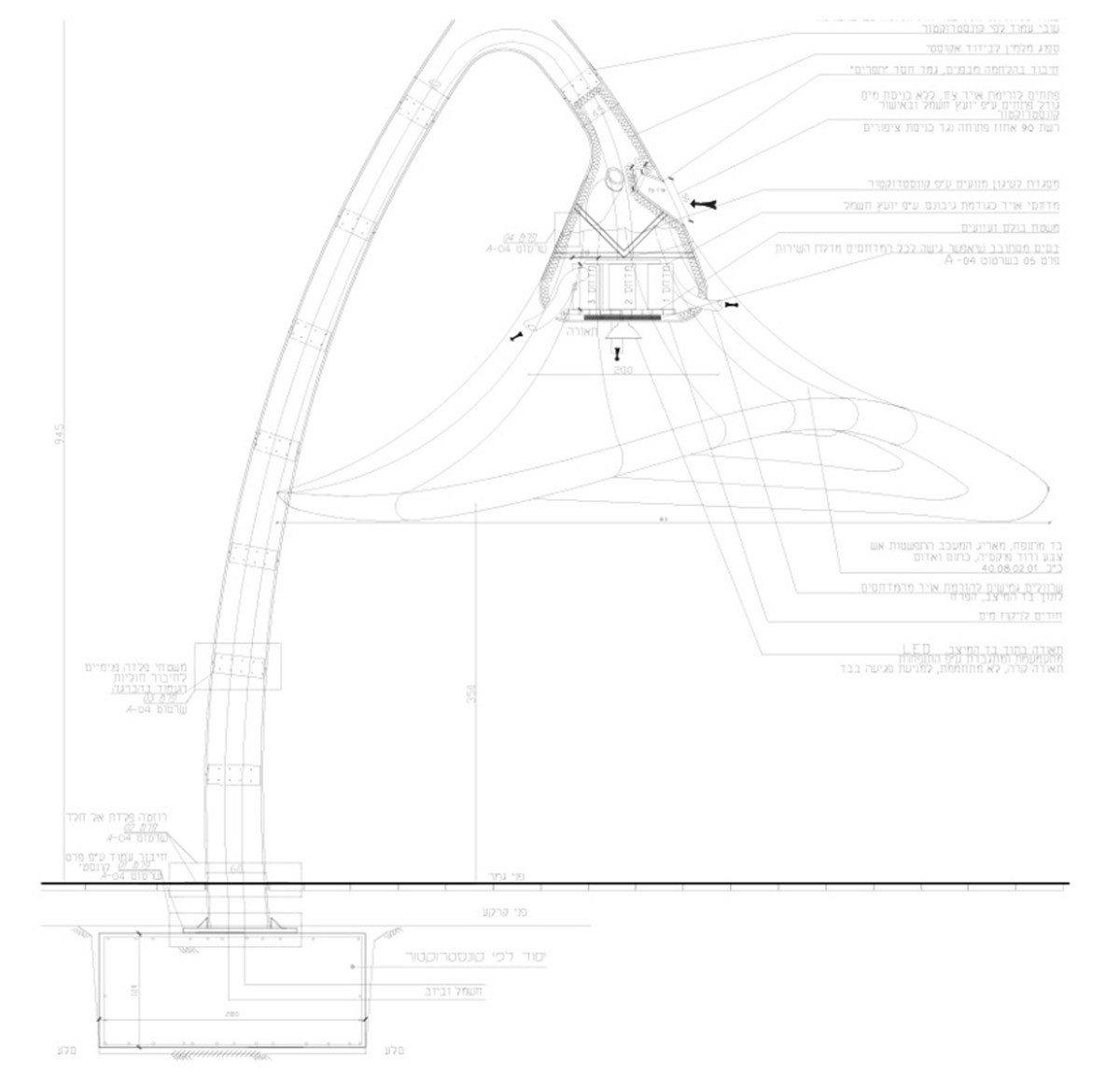 Glebe House is a two-storey addition designed by Nobbs Radford Architects to provide the family residence with a new open-plan living and dining space,...
Read more

Junction Shadow House by Post Architecture is a semi-detached residential dwelling that began as a mirror-image of its attached neighbour. This house in the Junction...
Read more

Located on a small island off the coast of Maine, this project began as a renovation. Initially, our clients hoped that an existing building on their property could be rehabilitated: a structure that accompanied the 100 year old farmhouse that has been their summer home for close to 40 years.
Read more

The house us built on a square lot of 600m2 in diameter, designed as an L shaped bench facing the gard. The two sides of the L-shape home contain the public functions, facing the yard and wrapped around the outdoor sitting area. The swimming pool is located at the back of the yard.
Read more

This Project consists of the integral refurbishment of a home in Petrer (Alicante). The existing building occupied a constructed surface of 138m2, 19 of which correspond to a porch.
Read more
Contemporary Houses

The Turkish architect Onur Teke has designed Teke house for a retired couple who yielded to “the pull of the land” and settled in...
Read more
GRX Arquitectos

House of Curtains, or La Casa de las Cortinas in Spanish, takes a residential renovation to the next level, transforming a dark and dreary space in the city of Granada, Spain. Curtains and drapes become a solution allowing natural light to filter through, inspired by the old Bañuelo de Granada.
Read more
Contemporary Houses

This project intends to refurbish a single-family house, severely affected by pathologies resulting from defective construction options. In addition of trying to correct the existing pathologies, we also intend to rectify the dysfunctions of spatial organization.
Read more
Butler Armsden Architects

This gently sloped 1.75 acre lot in Atherton provided a rare opportunity to create a contemporary courtyard house that also has commanding views of the surrounding hills. The pleasantly varied massing and simple wood siding gives this house the look and feel of a structure that has evolved over time, while remaining contemporary and fresh.
Read more
Contemporary Houses

A spectacular glass box floating atop the oceanfront dunes in the Hamptons, this ultra-modern luxury residence is uniquely constructed with beautifully formed concrete boxes set on top of two piers.
Read more
© All rights reserved. HomeWorldDesign 2013-2020. All images are © each office/photographer mentioned.