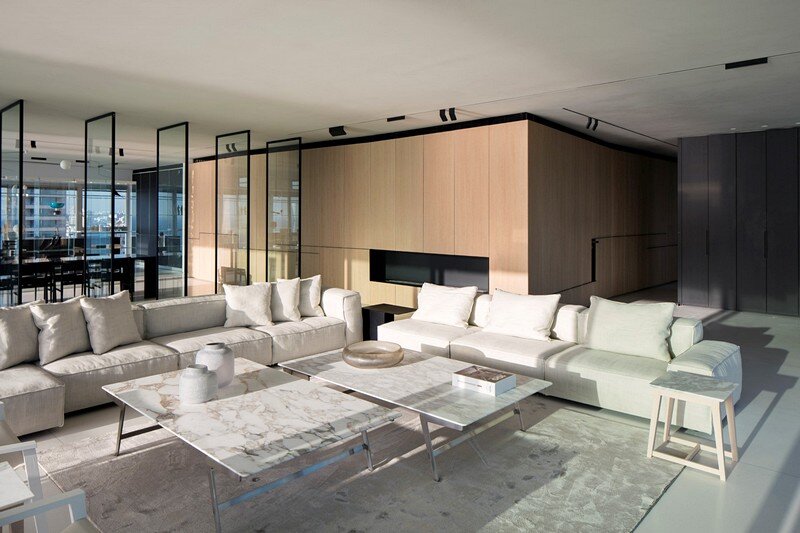 The N apartment is located over an entire floor in one of the luxury towers recently built along Tel Aviv’s beachfront, offering a full panoramic view of the city. Overlooking the crumbling and abandoned structure that once housed the dolphinarium, a stroll around the perimeter of the apartment is like taking a bird’s eye view city tour – the Charles Clore Promenade, Jaffa’s ancient Kasbah, all are woven into organic and ever-changing live scenes. A rich and multi-hued urban landscape saturated with layers of deconstruction and reconstruction, historical places alongside new modern ones. And alongside them, the Mediterranean, blue and infinite, flowing and changing ceaselessly. The sea is more than landscape – its intoxicating presence is felt in its considerable influence on the clear air and on the walls of the city’s buildings, crumbling under its salinity. It is a constant presence in experiencing the space, a major starting point in its design. The sea is viewed through the apartment’s glass curtain wall and mirrored back repeatedly in numerous reflections in myriad shades of blue. 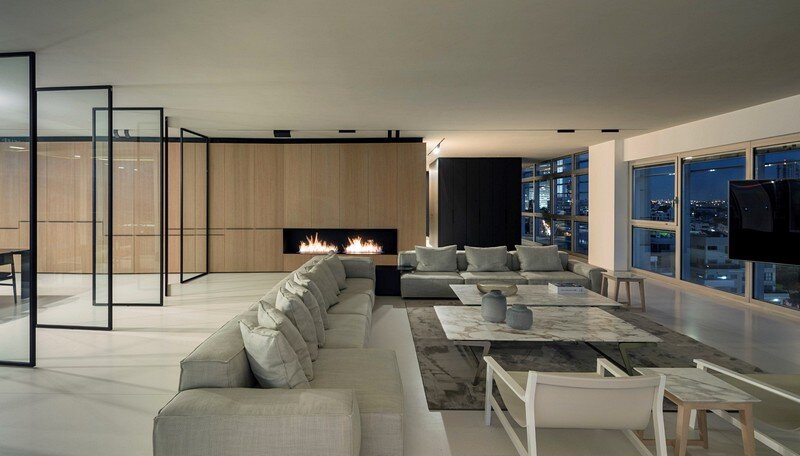 The floor plan covers the area of an entire floor, with the apartment organized around the core of the building, inviting a circular flow around it. Despite its centrality, attention is removed from the core and organized from it outwards – to the environment, clearly explaining the importance of the urban landscape in the design process. 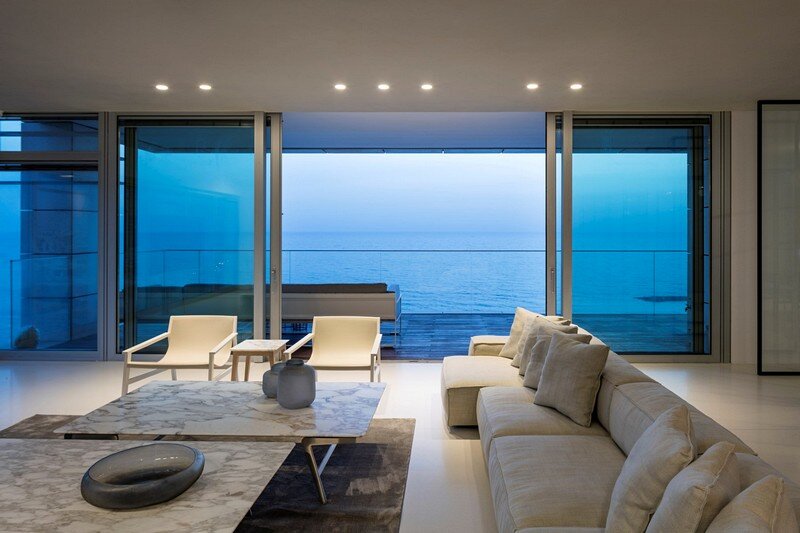 In moving around the core, one becomes aware of the long and broken lines that blur and undermine the banal and predictable orthogonal linearity. The selection of wood as the cladding material for the core of the building contrasts with the glass that serves as the exterior’s primary cladding material, creating a bicircular scheme that is soft and organic, the former in its broken linearity and, in contrast, the latter composed of the urban landscape itself, making the visitor fully aware of the challenged stability. 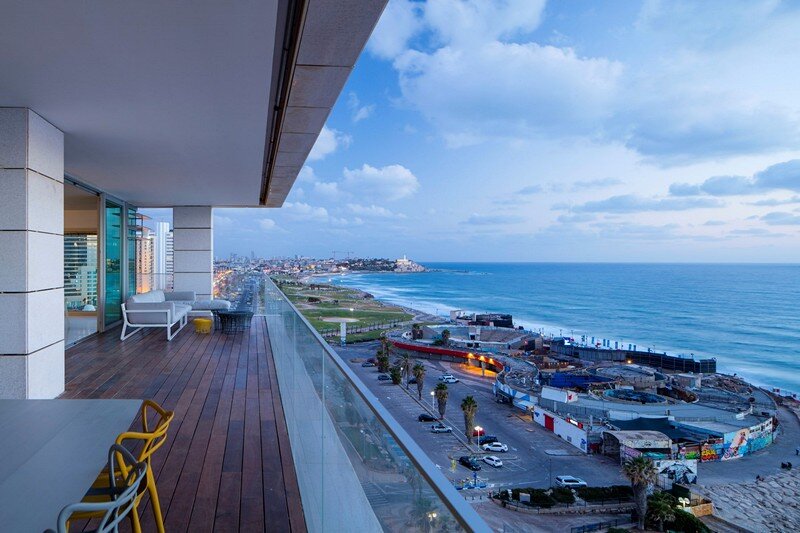 Only discreet linear iron work softens the core’s wooden cladding, as it if were guiding movement in space, marking it out and accompanying it in a precise patterns of marks. And, in juxtaposition, the ironwork fittings of the windows, as if preventing the visitor from diving down in an intoxication of senses. 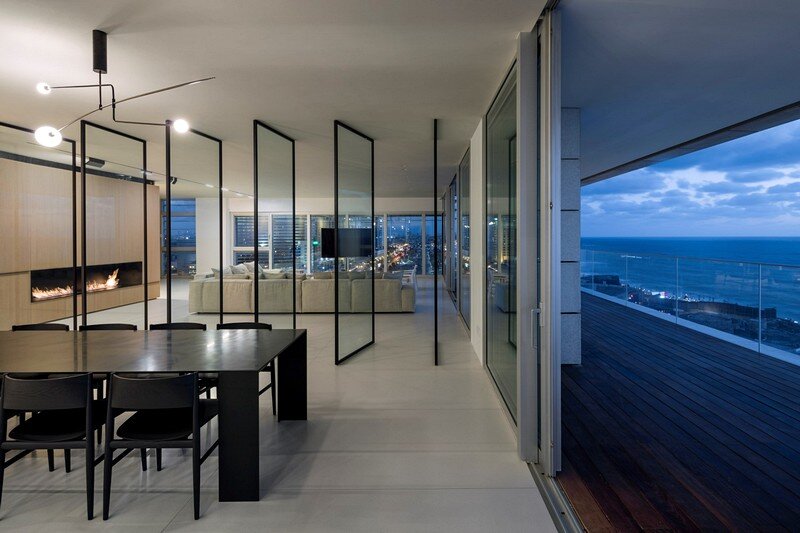 The floor plan of the apartment has remained open and flexible – the spaces are obvious and clear-cut in the way they are organized, separated only by partitions of different kinds, ranging from carpentry elements alongside converging glass doors. 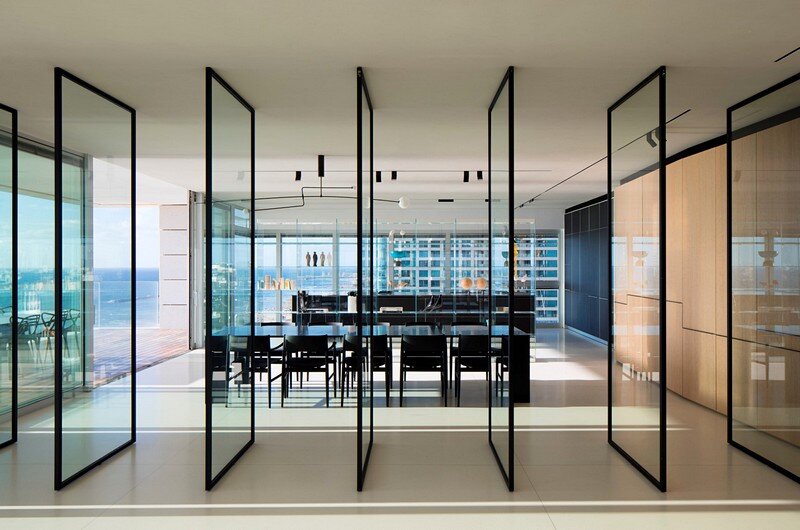 The public areas are marked out by a wall of pivoting glass doors on the one side and a transparent glass display/bookshelf unit on the other, while the private areas are secluded and tucked away so as to allow a natural circular flow of free, unobstructed movement around the apartment’s whole perimeter. 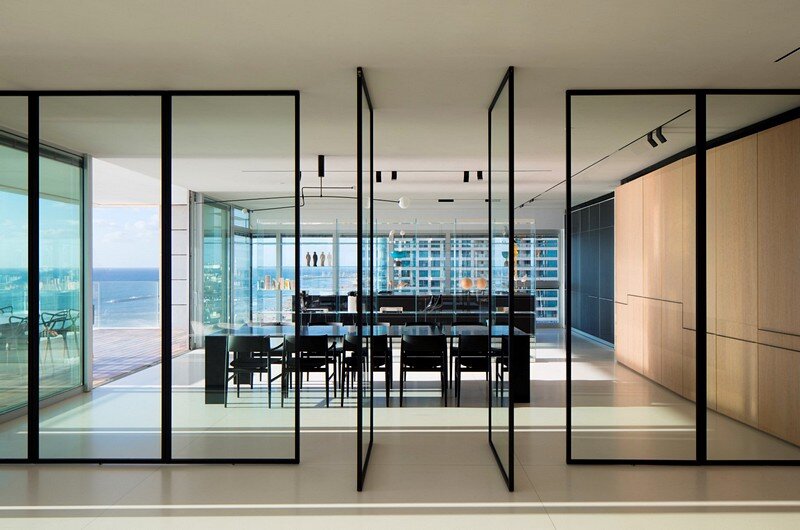 The choice of colors made for the built elements is what creates the distinction between the hidden and the blurred – such as the core of the structure, which is covered in light organic material, and between areas that have a clear and defining presence, such as the dark storage partitions creating separation in space, and defining the different areas. It is a combination that allows an uninterrupted view of the panorama and highlights the starting point for the design – the presence of the urban landscape and the apartment’s assimilation within it. 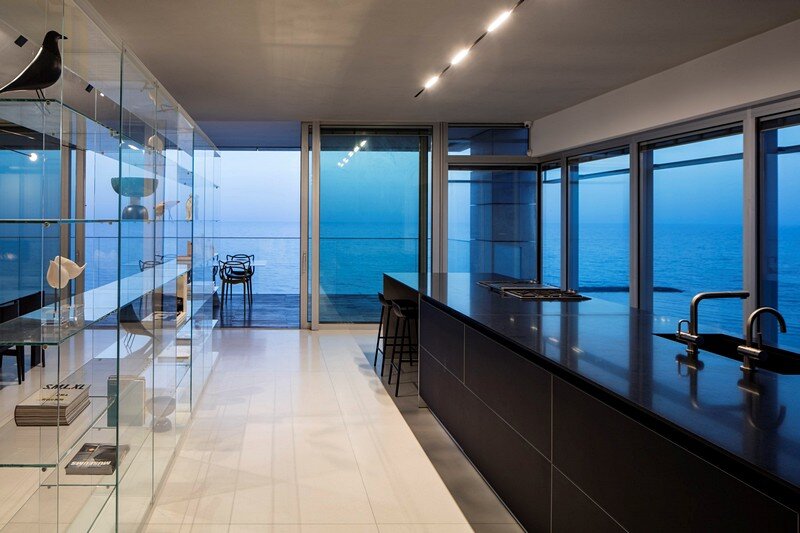 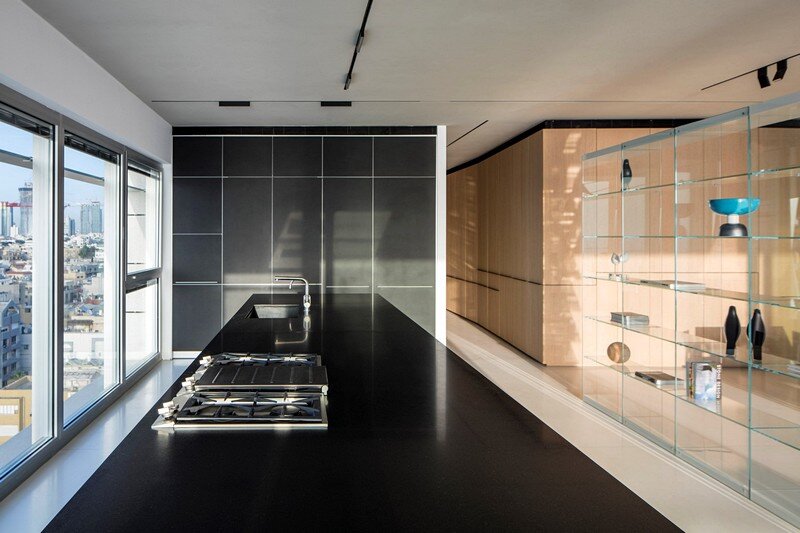 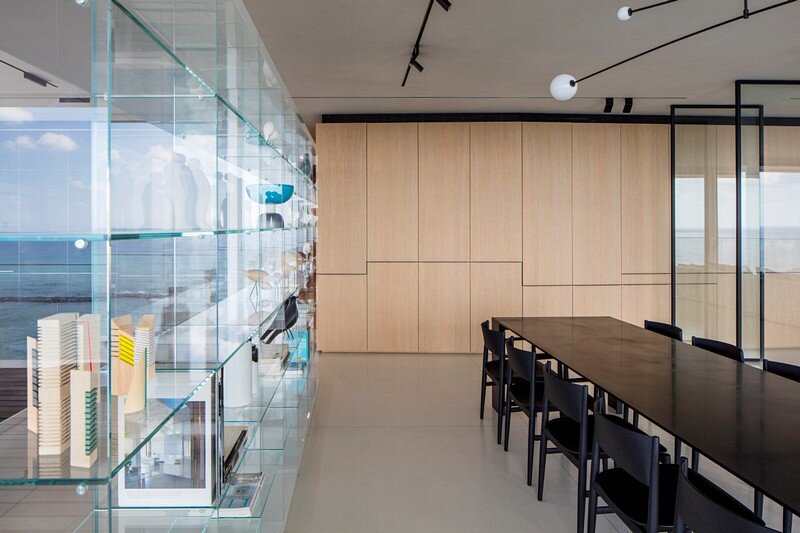 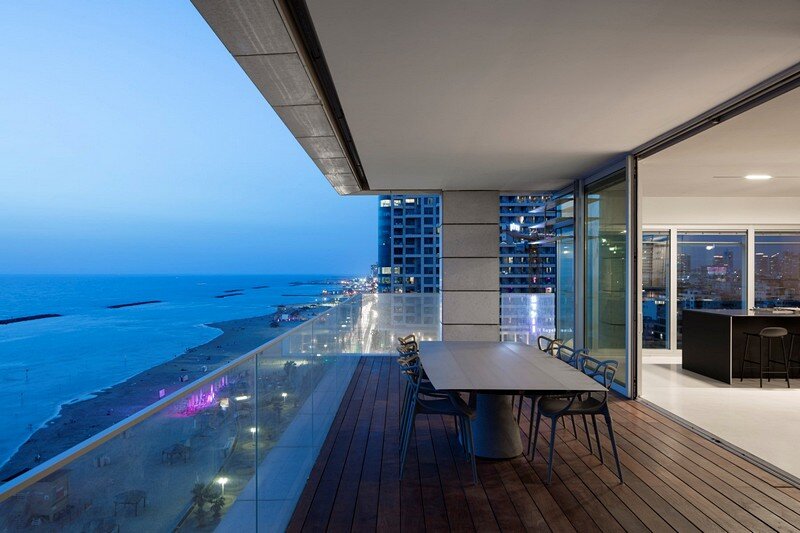 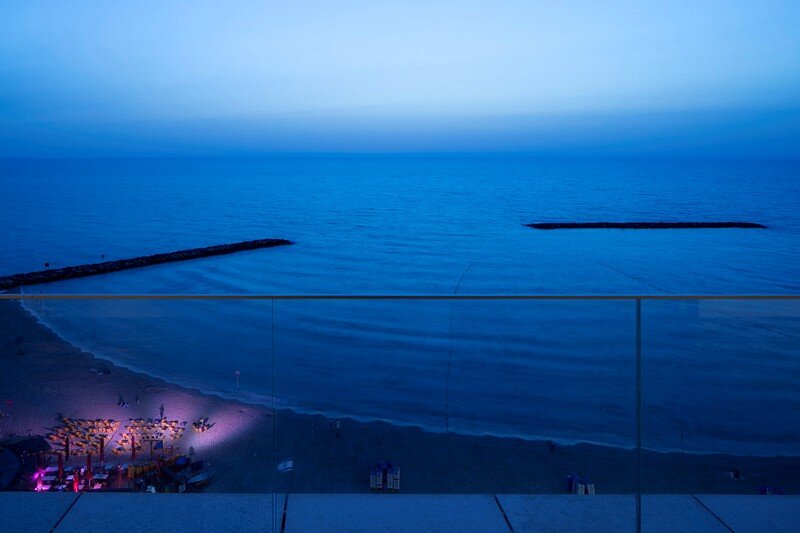 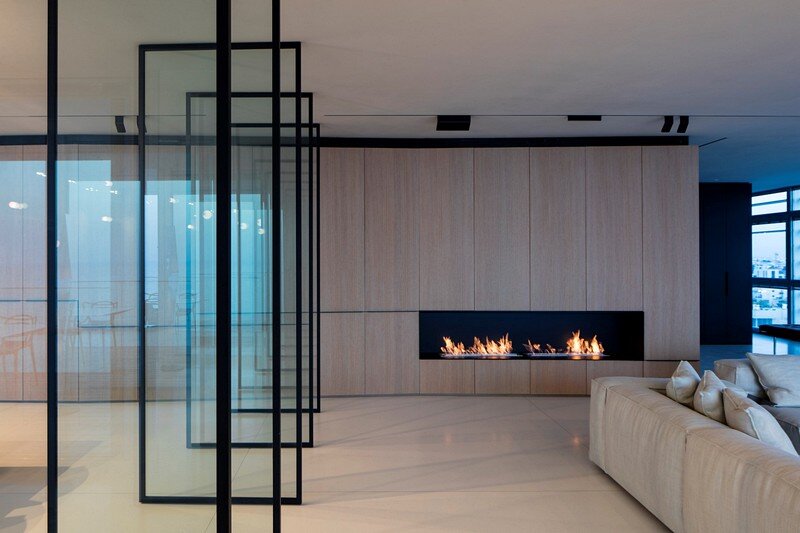 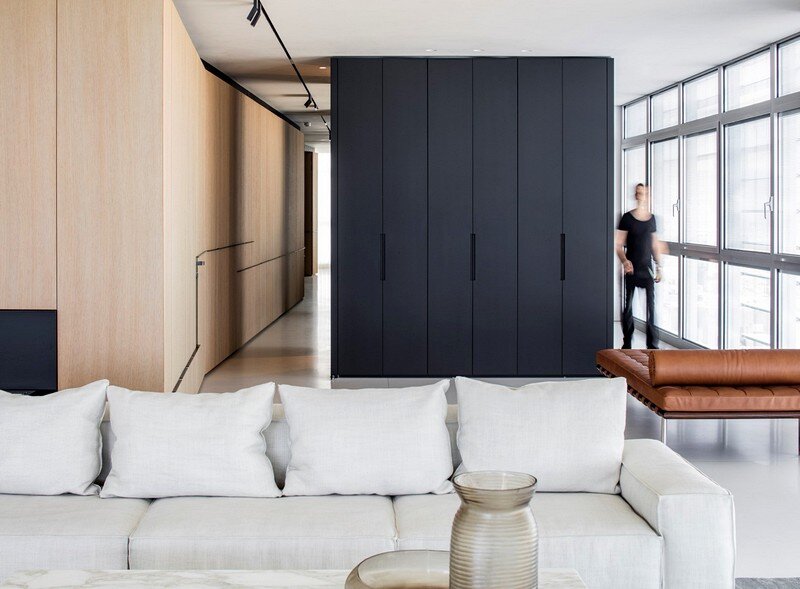 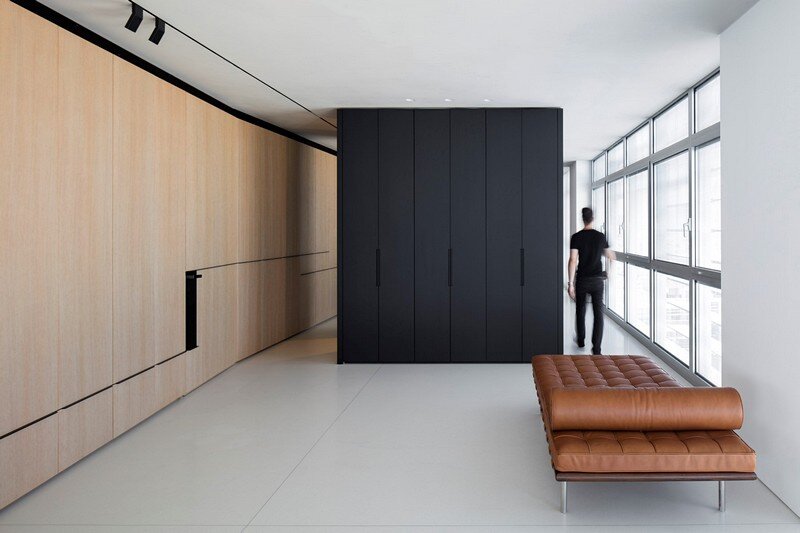 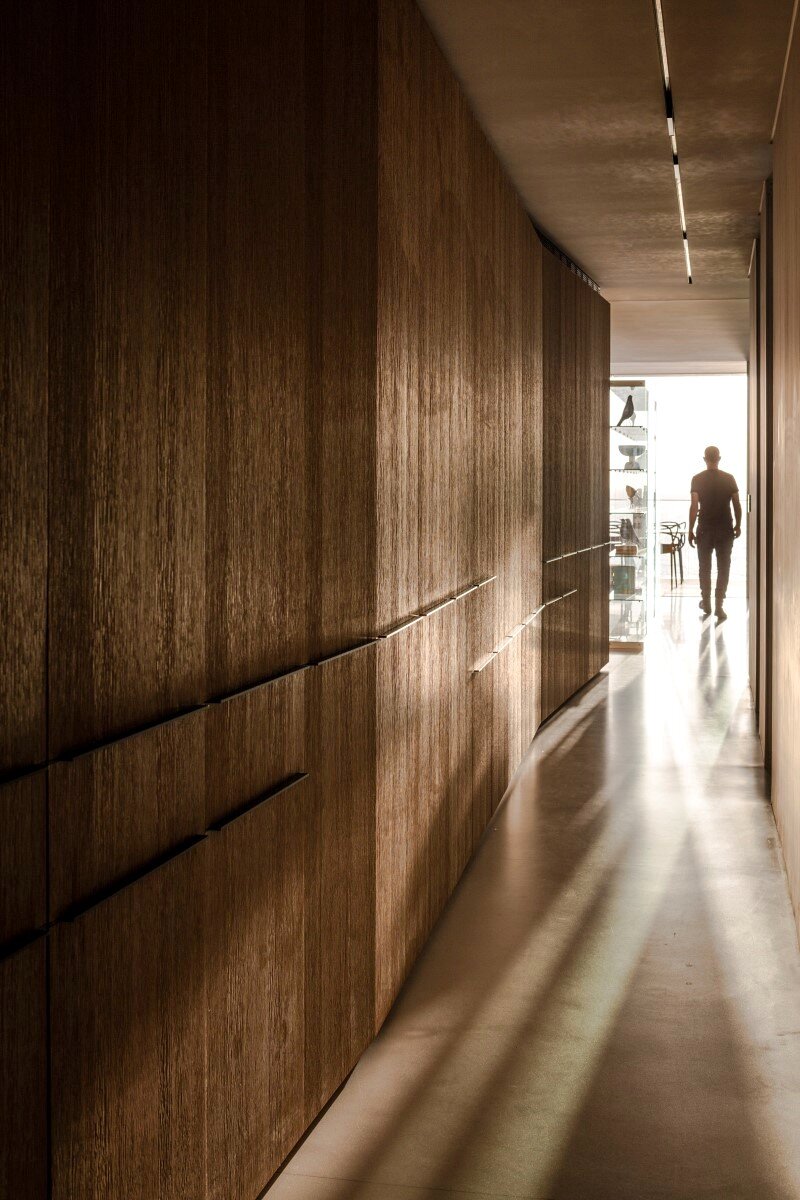 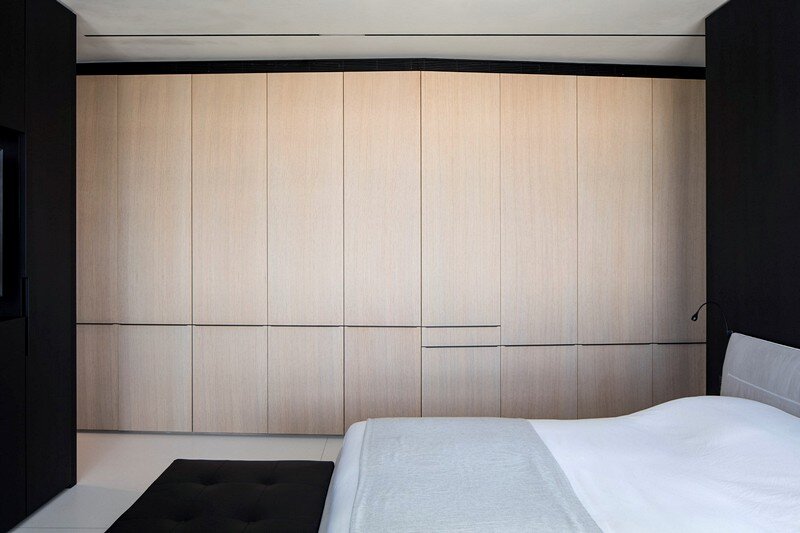 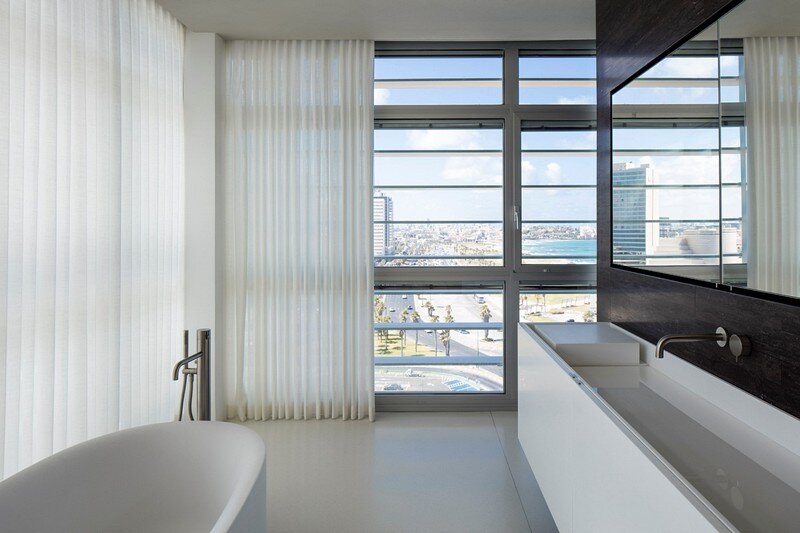 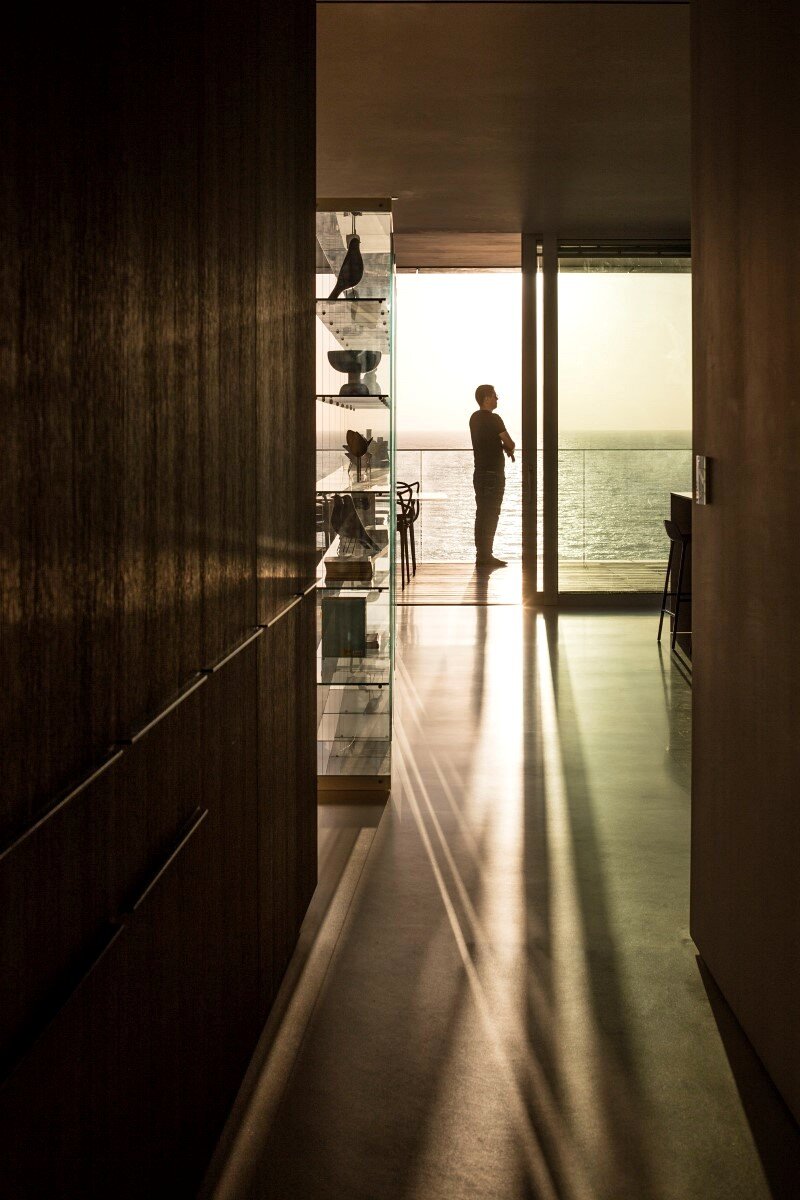 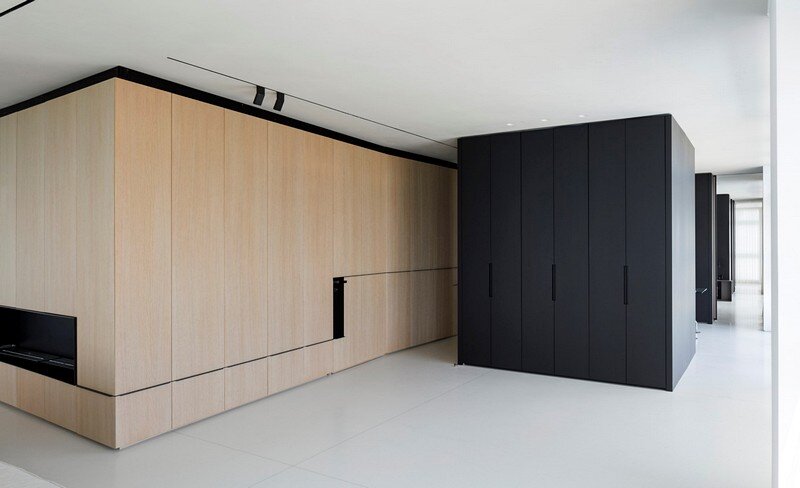 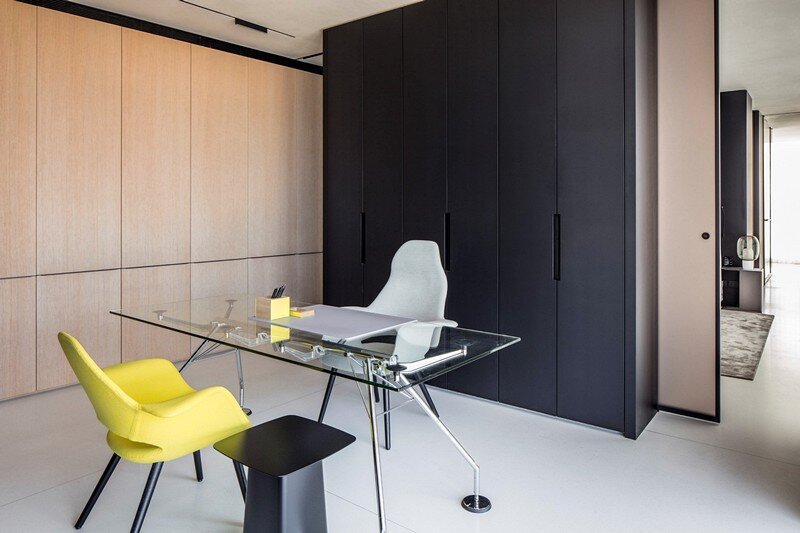 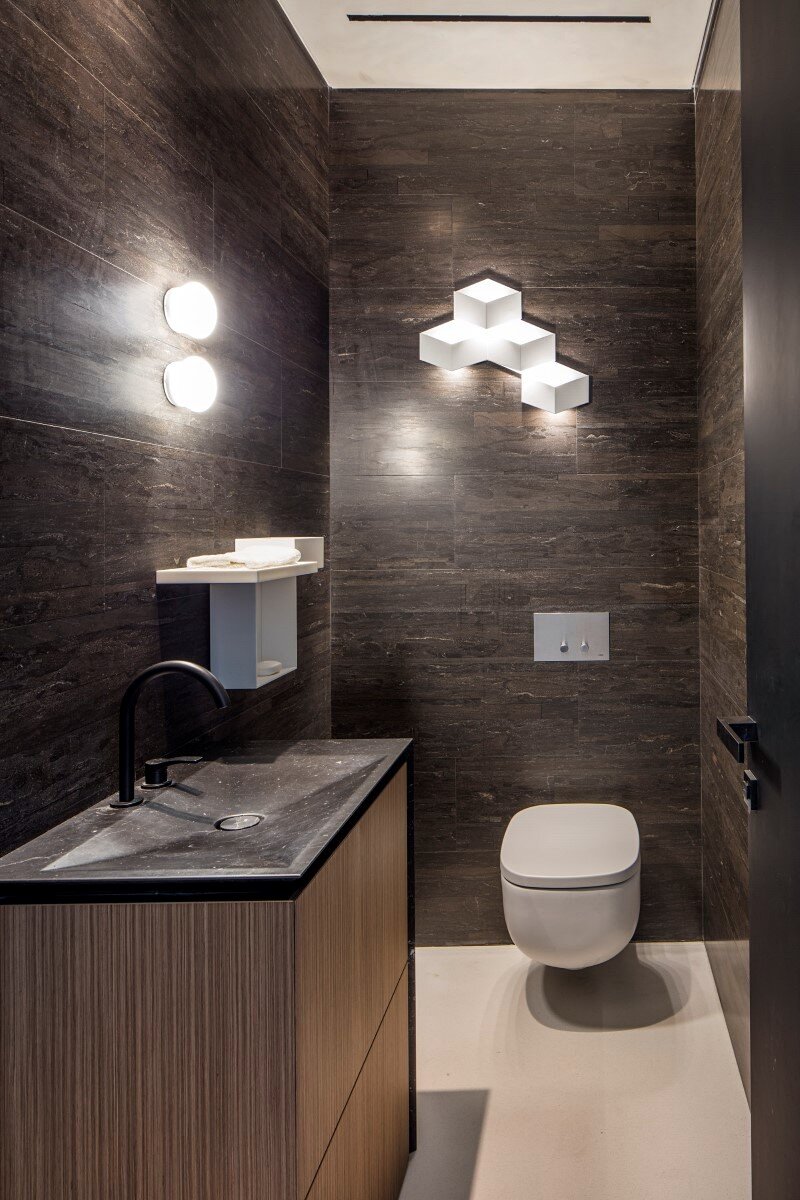 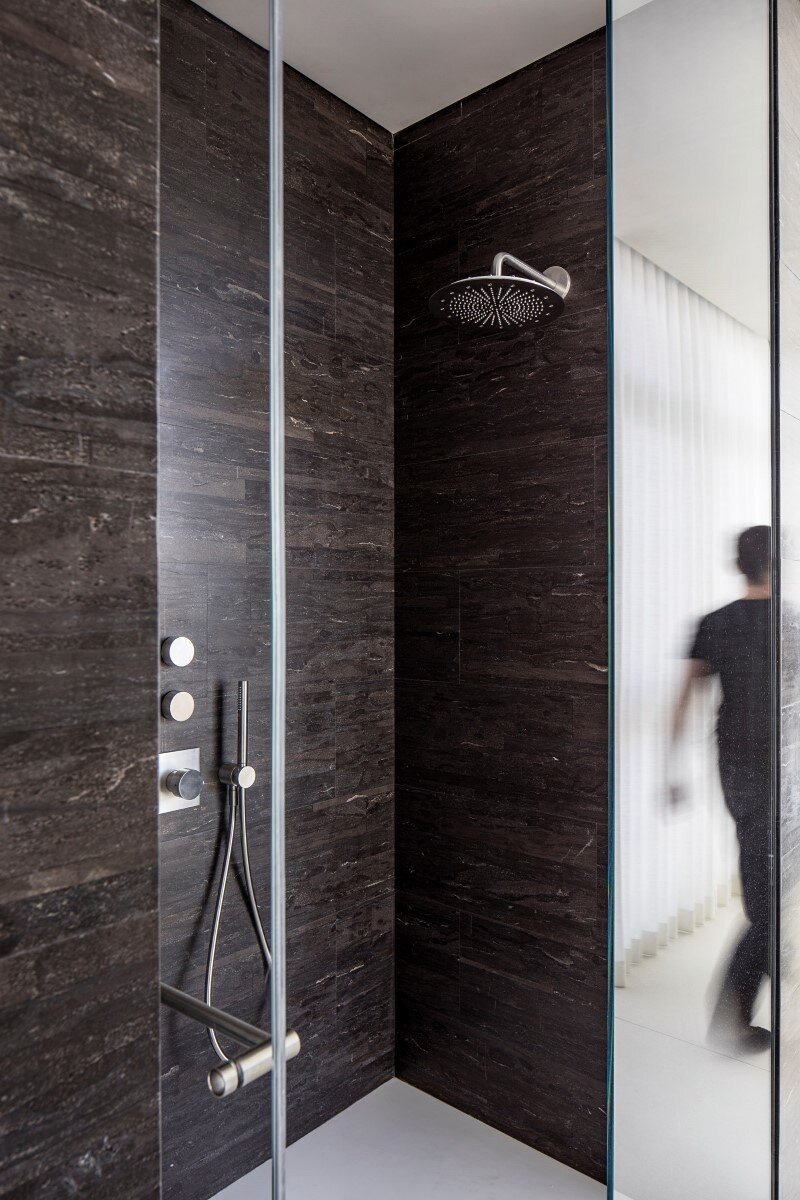