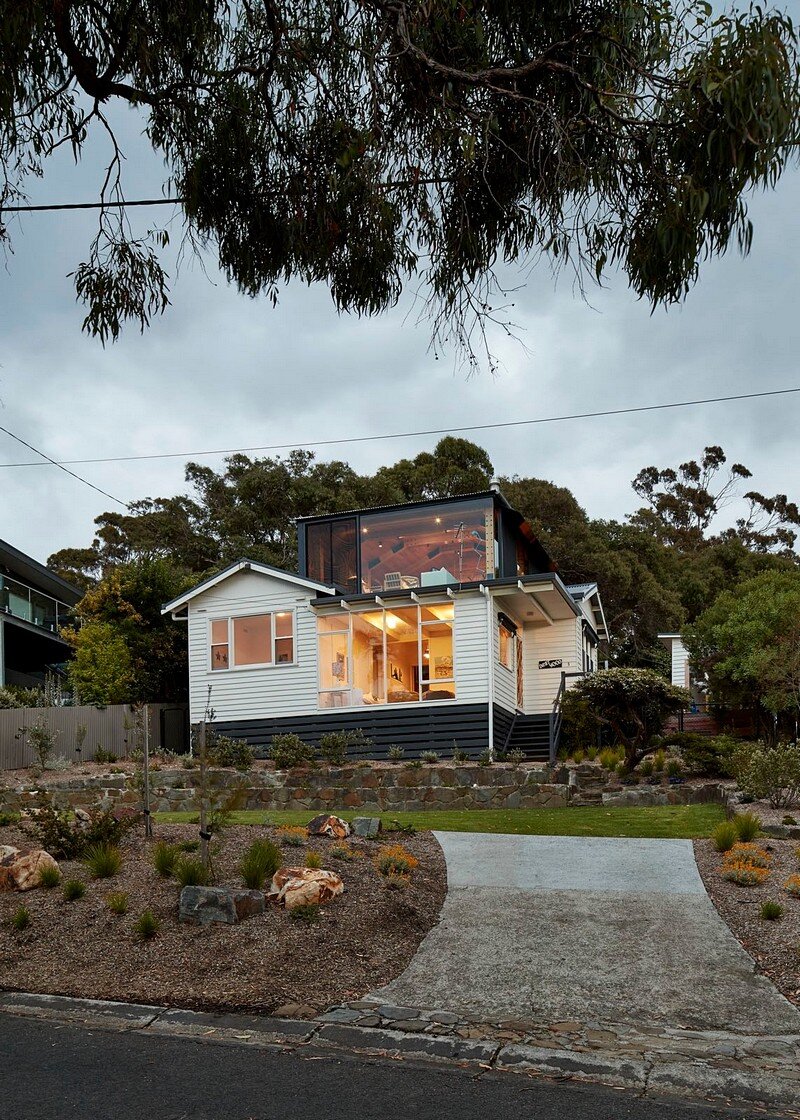 Dorman House is an old shack transformed into a comfortable home for a young family. The project was recently completed by Austin Maynard Architects.

In brief
A couple of years ago Kate and Grant showed us around their beautiful little shack, in bushland near the ocean, which they loved and valued greatly. They asked ‘how could we add a clear and elevated view of the ocean without demolishing, damaging or dominating our beloved shack?’

It’s a simple brief, but inherently problematic. Solutions can easily become expensive and complicated. After stumbling through the complexities many people choose to demolish their shack and start again. It is an economic decision that many shack owners make, at the expensive of local and family heritage. Our challenge was to avoid doing what some neighbours, and many other people along the coast, have done. We refused to have yet another Great Ocean Road shack sacrificed and replaced with a McMansion. We refused to be part of the slow erosion of the Great Ocean Road’s collective cultural memory. Kate and Grant couldn’t agree more. 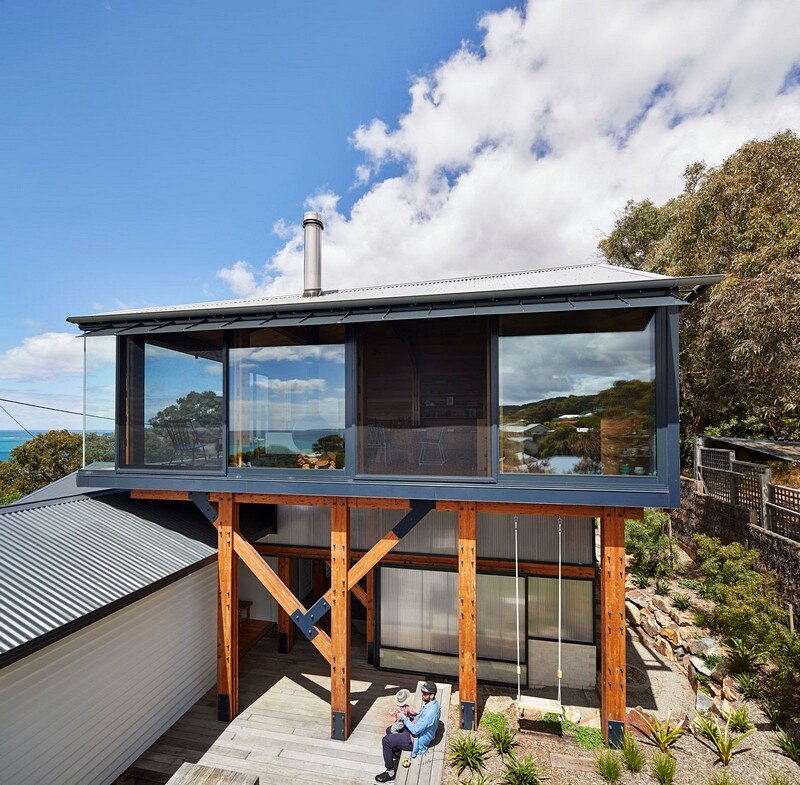 The What
Dorman House is a finely crafted timber box, independently constructed to hover over an existing beach shack in Lorne, Victoria. In contrast to the neighbours, it has been designed to weather, to go grey, to age, and sink back into the landscape, back into the bush. 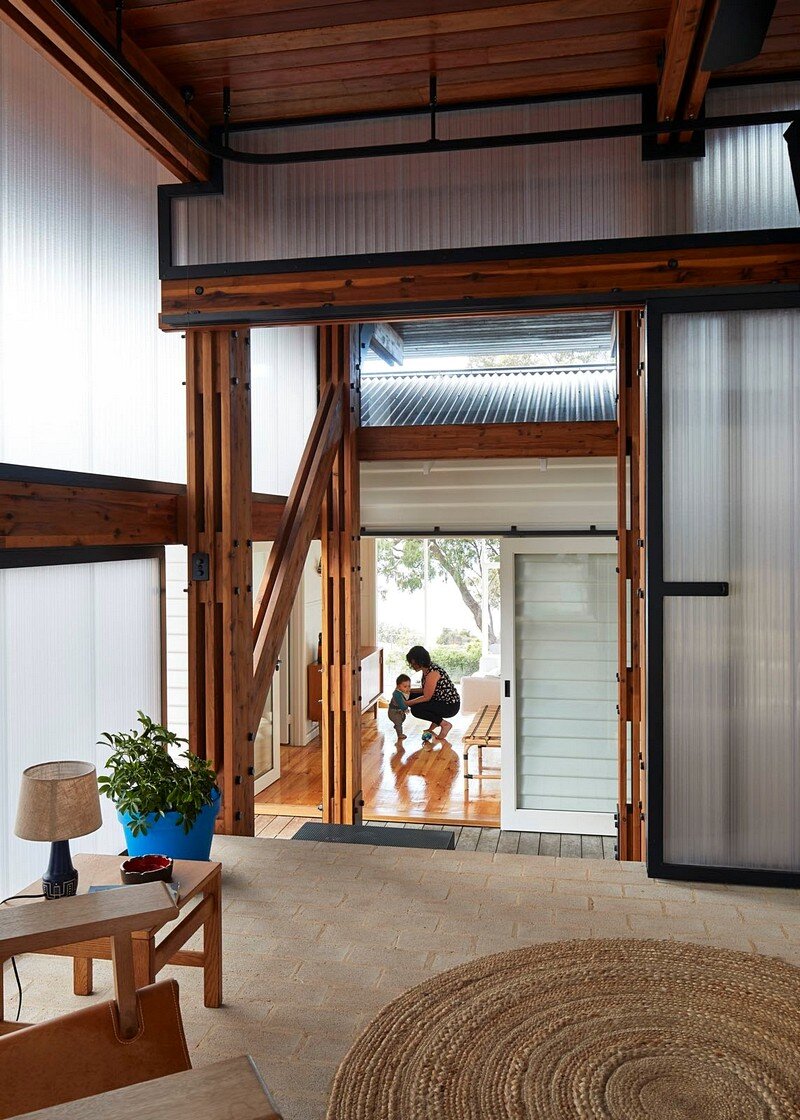 The elevated extension sits on top of a heavy timber structure and comprises a kitchen, dining and living room, accessed via a spiral staircase. Polycarbonate was used as a lightweight cladding to infill the structure below, creating a useable space without adding mass that would dominate the original property. The new living space does not protrude forward over the ridge-line of the old house and avoids dominating the original shack unnecessarily. 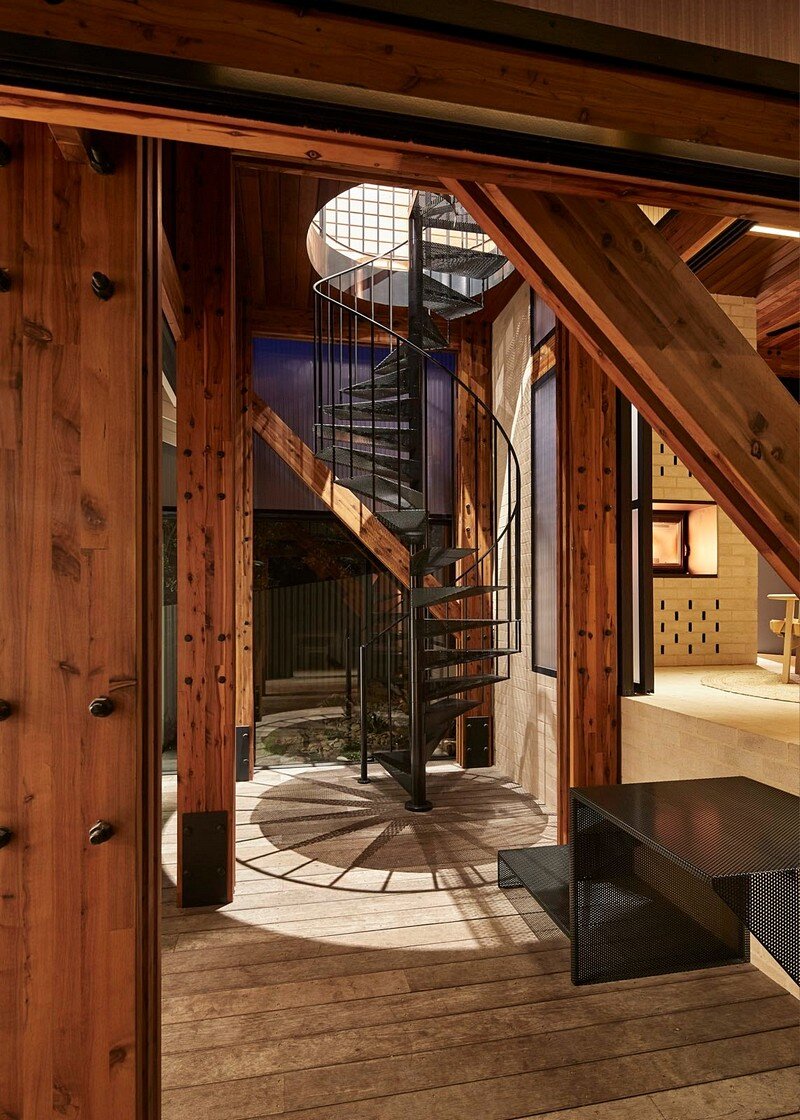 Whilst the old kitchen was transformed into a second bathroom and laundry, the original beach shack remains mostly unchanged. It was tidied up and repainted, so that the charm and character of the post war shack was retained. 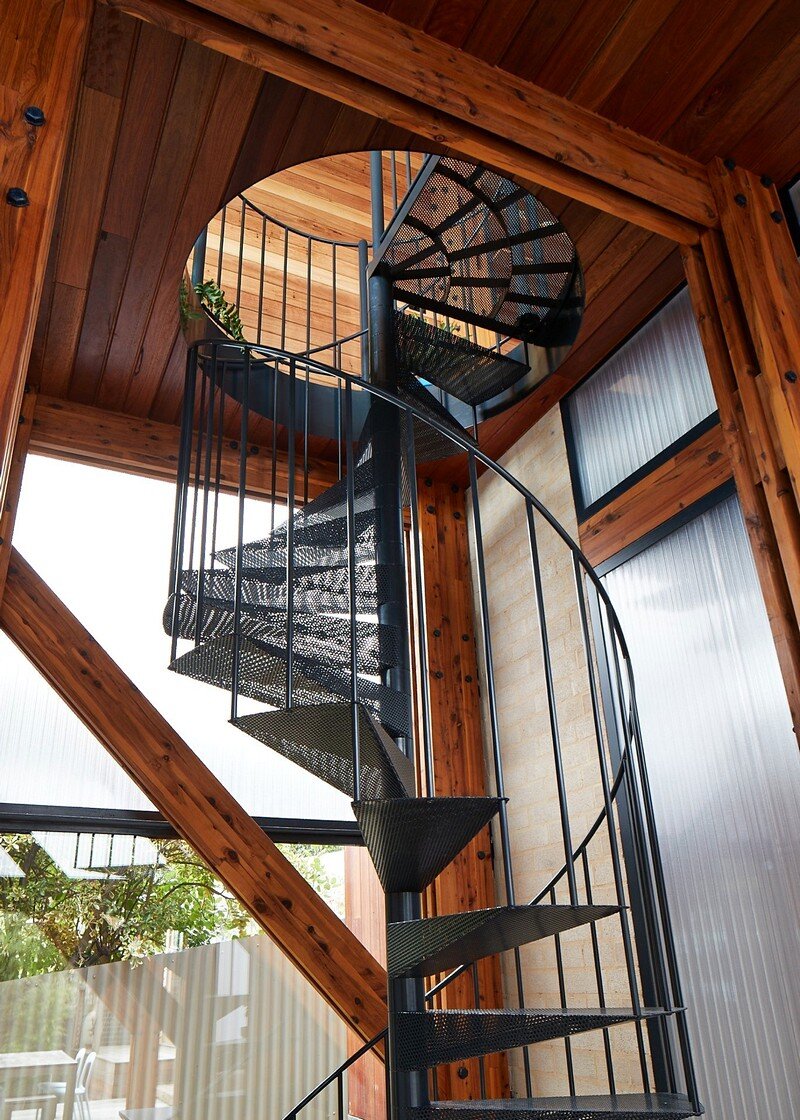 The Why?
In the post-war period many Australians aspired to own both the suburban home and the bush/beach shack. The suburban home served the purpose of projecting an aspirational image of self to the street, whilst the shack allowed people to drop their social facade and be themselves. The home and the shack served specific functions in enabling Australians to celebrate diverse facets of their individual and social personalities. Today, sadly, we see the steady demolition of the Australian shack. Modest, humble shacks are being replaced with incongruous and unnecessary McMansions. Increasingly we see a duplication of the suburban home where once stood the shack. Through this process we not only lose important parts of our built heritage, we also lose a significant part of our social and emotional diversity. We lose parts of ourselves. At Austin Maynard Architects we do our best to avoid the simple temptation of demolishing and replacing. Where extensions are required/desired, we aim to retain and respect the existing shack and its scale. 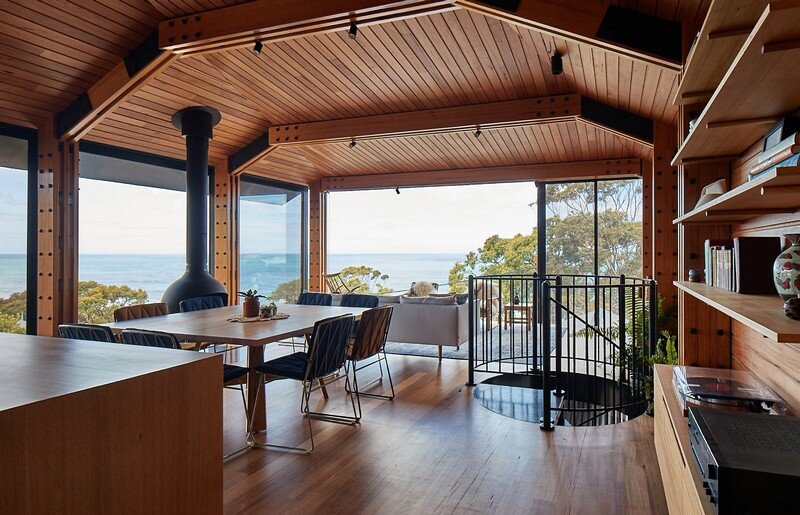 Inside out
While Kate and Grant asked to “save our shack but give us the view” they also wanted to create a space that was not solely focused on the vista. What could easily have been a white plasterboard box full of downlights is, instead, detailed and well considered. Internally lined with Silvertop Ash, it’s a space that exudes character and responds to the seasonal changes and hours of the day. The lighting inside is very evocative, controlled so you can work, or prepare a meal, without flooding the space with light and compromising the view. Full height windows on the northern side of the living space slide open to allow in the sea breezes. The screening, required in bush fire zones to stop fire embers, acts as a balustrade. 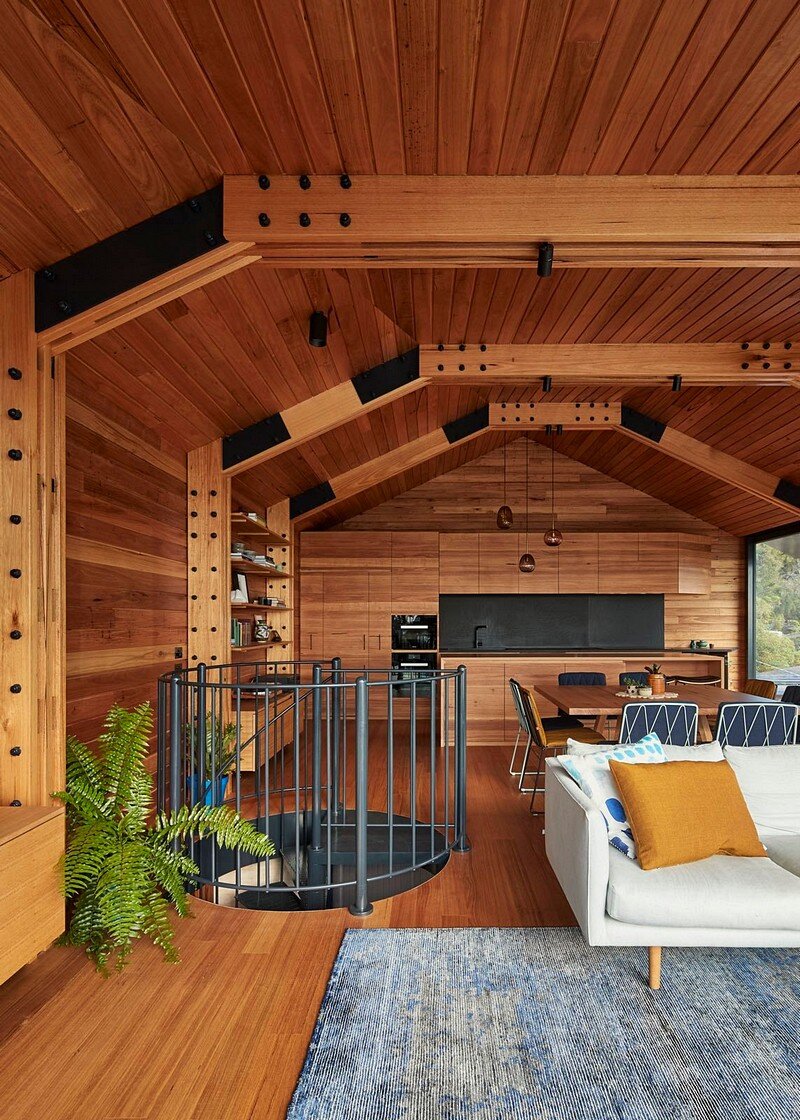 The undercroft of the new living space is a simple infill of the heavy timber structure that holds the living space high up in the view. We have lined the space with polycarbonate so that an abundance of filter light fills the room. Although it was originally envisaged as a rumpus room, Kate and Grant loved it so much that they wanted it as their bedroom. We added heavy curtains and huge sliding doors so that the space could have as much light and openness as they wanted. They could leave it open on a moonlit night and sleep with the sea breeze rolling over them, or close it up and curtain it into darkness for a cool summer afternoon nap. 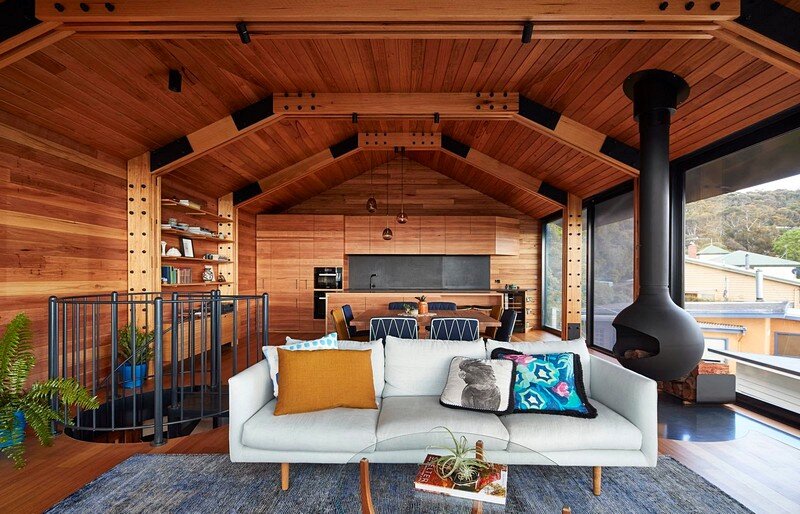 Sustainability
Like all of our building, sustainability is at the core of Dorman. It is always a challenge to maximise glass and view while also achieving thermal efficiency however we have worked hard to create big views without compromising performance. Most of the glass faces north and all windows are double glazed with thermally separated frames. There is a hood above the northern windows to shield the summer sun yet still achieve optimal passive solar gain in winter. Along with active management of shade and passive ventilat. 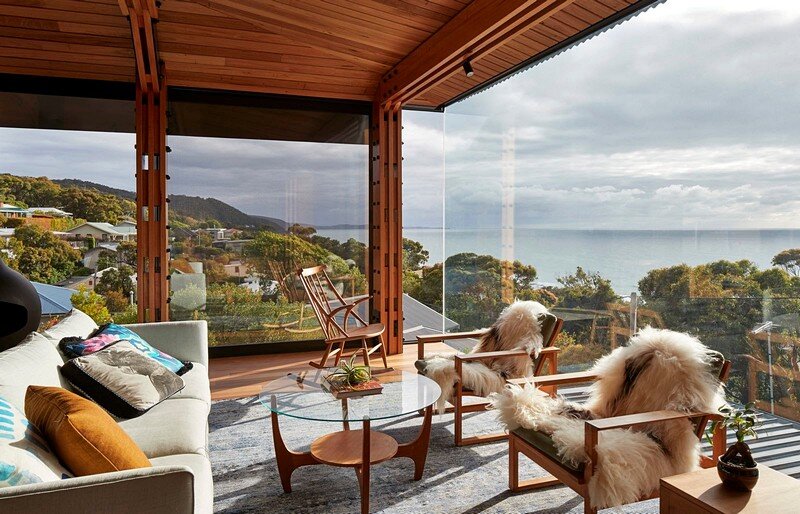 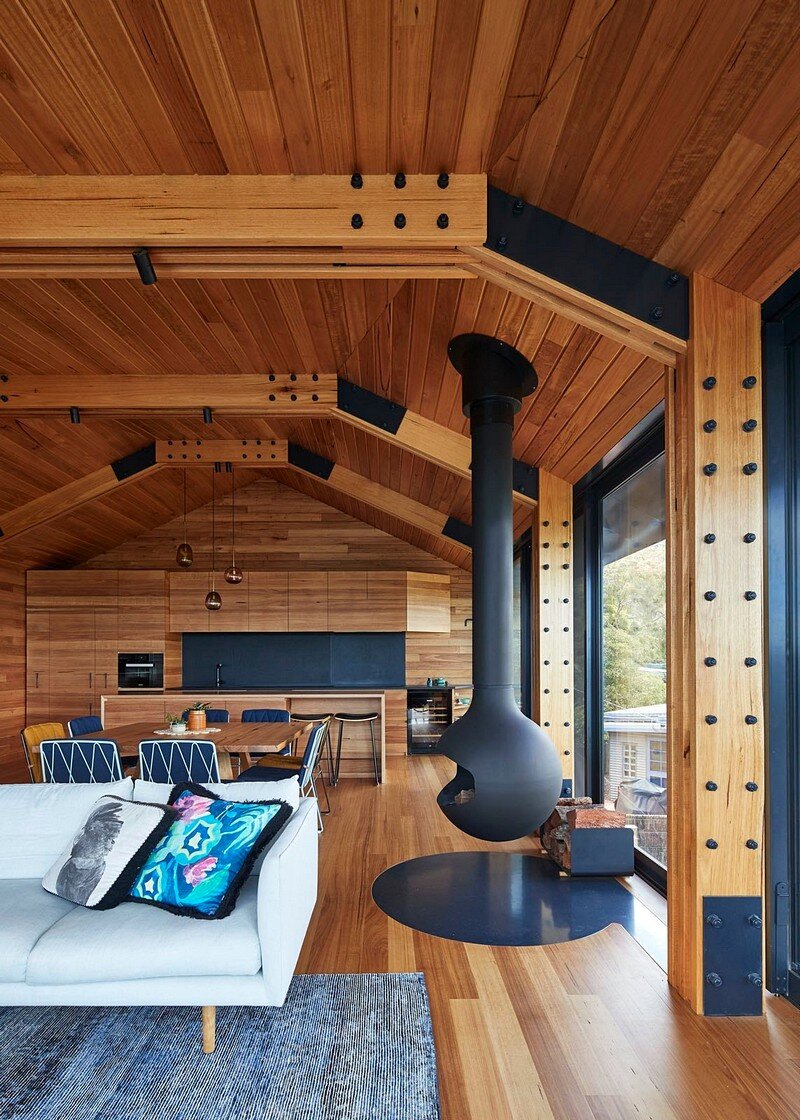 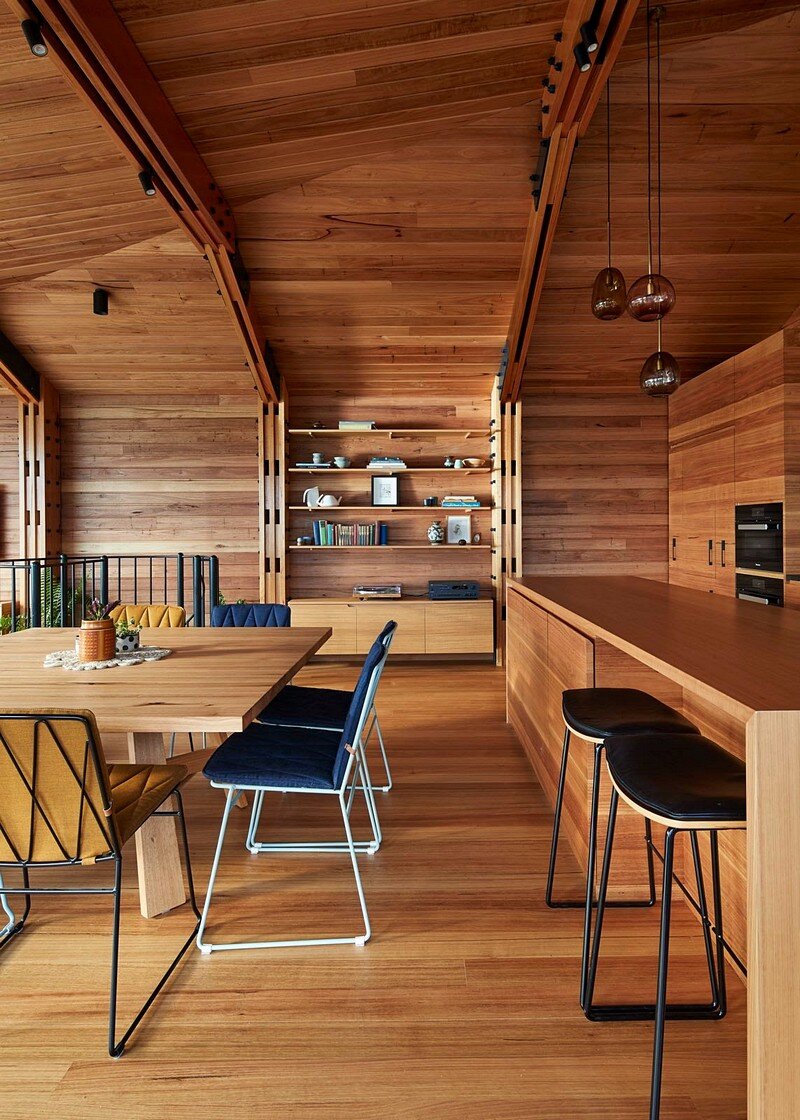 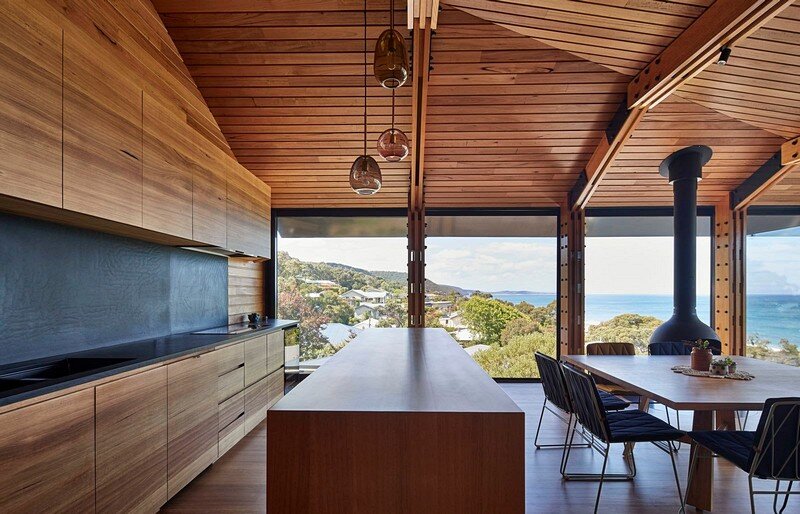 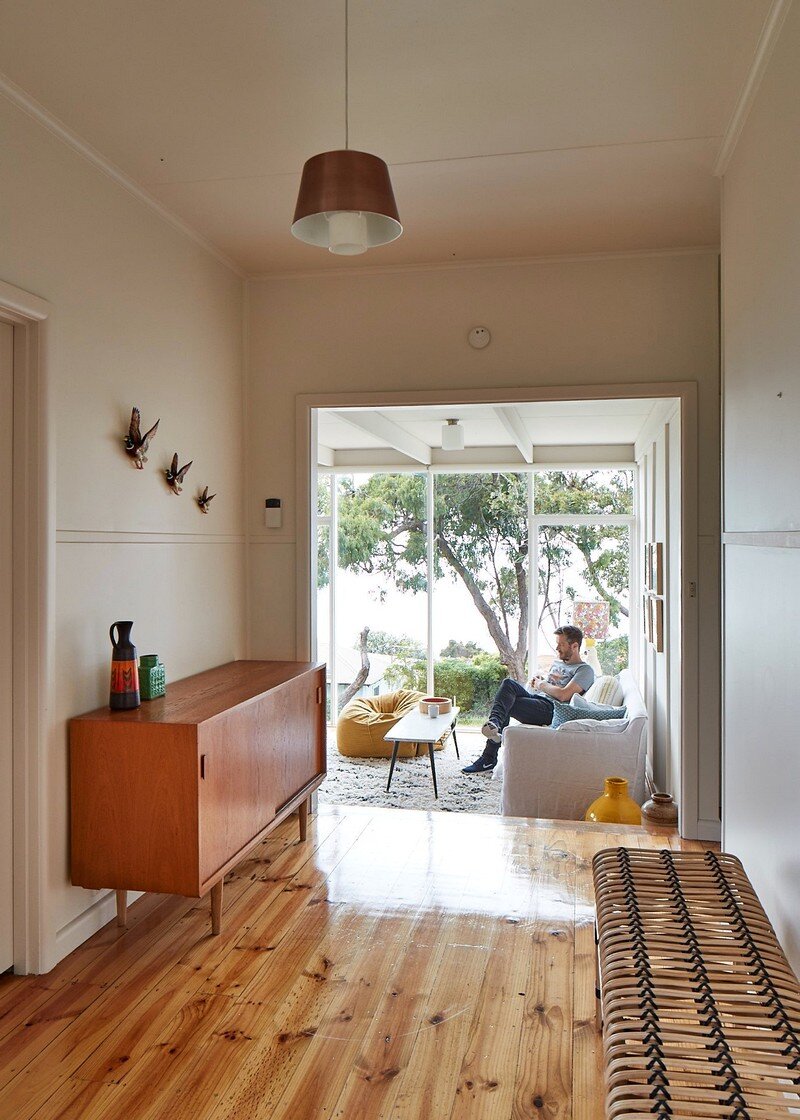 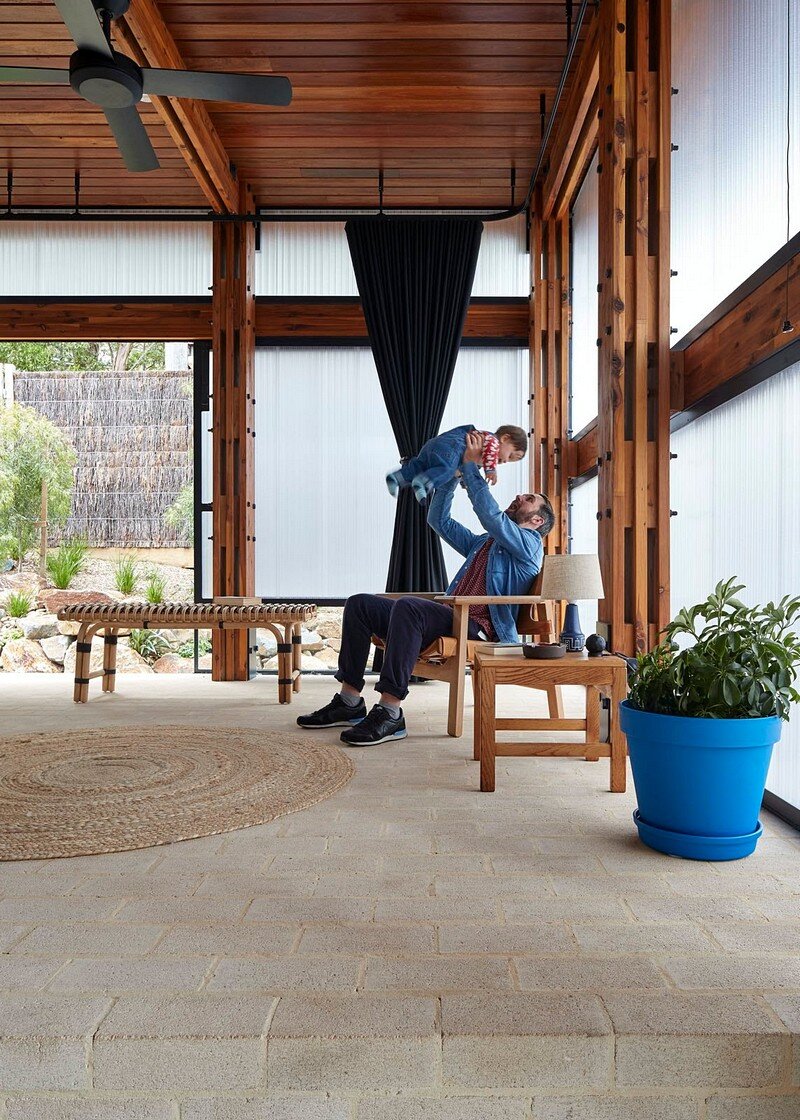 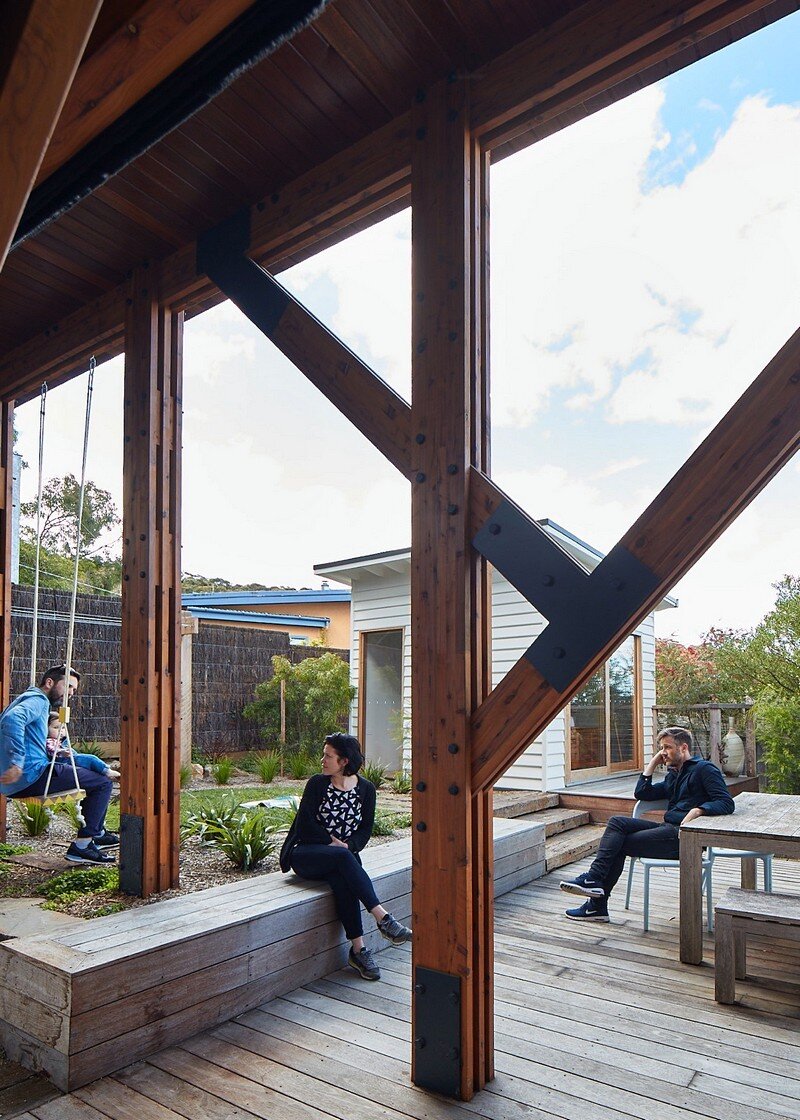 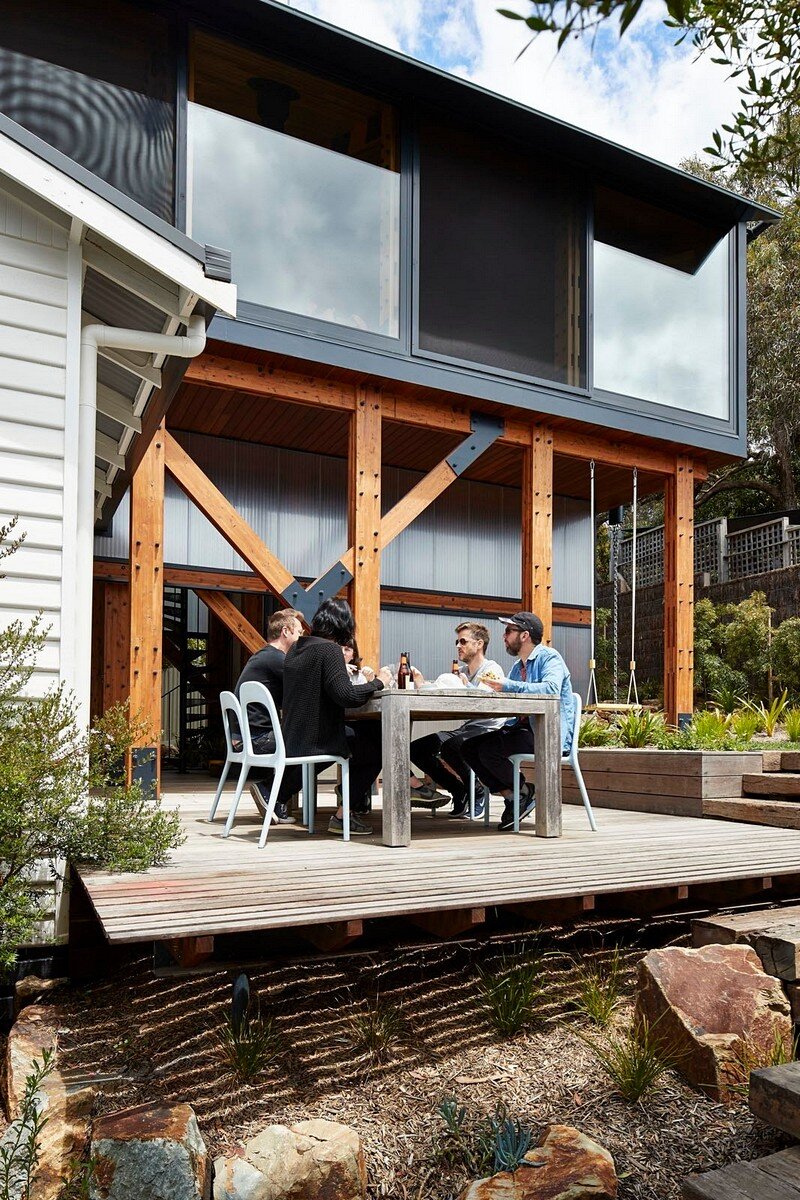 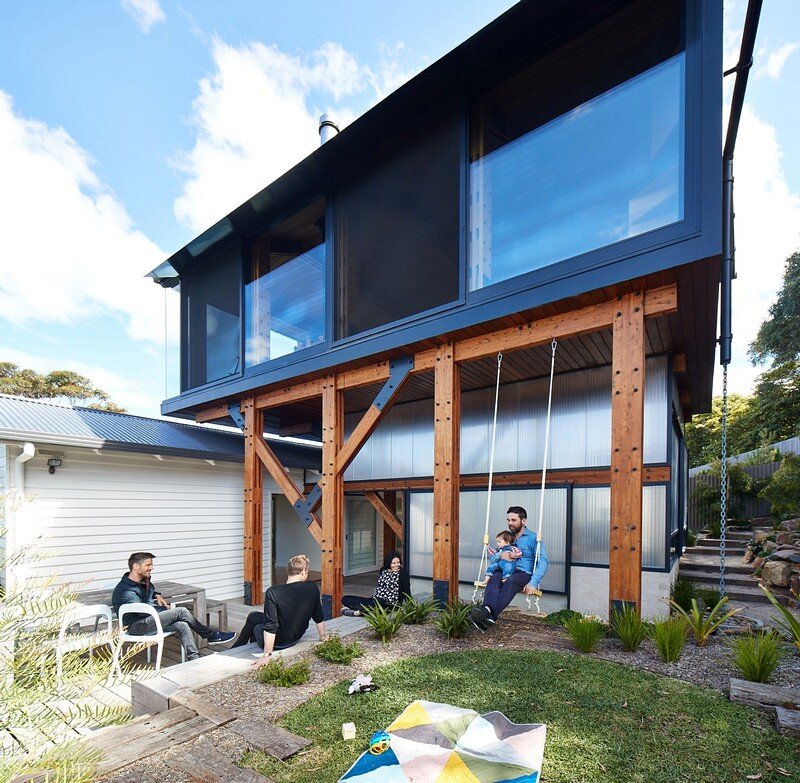 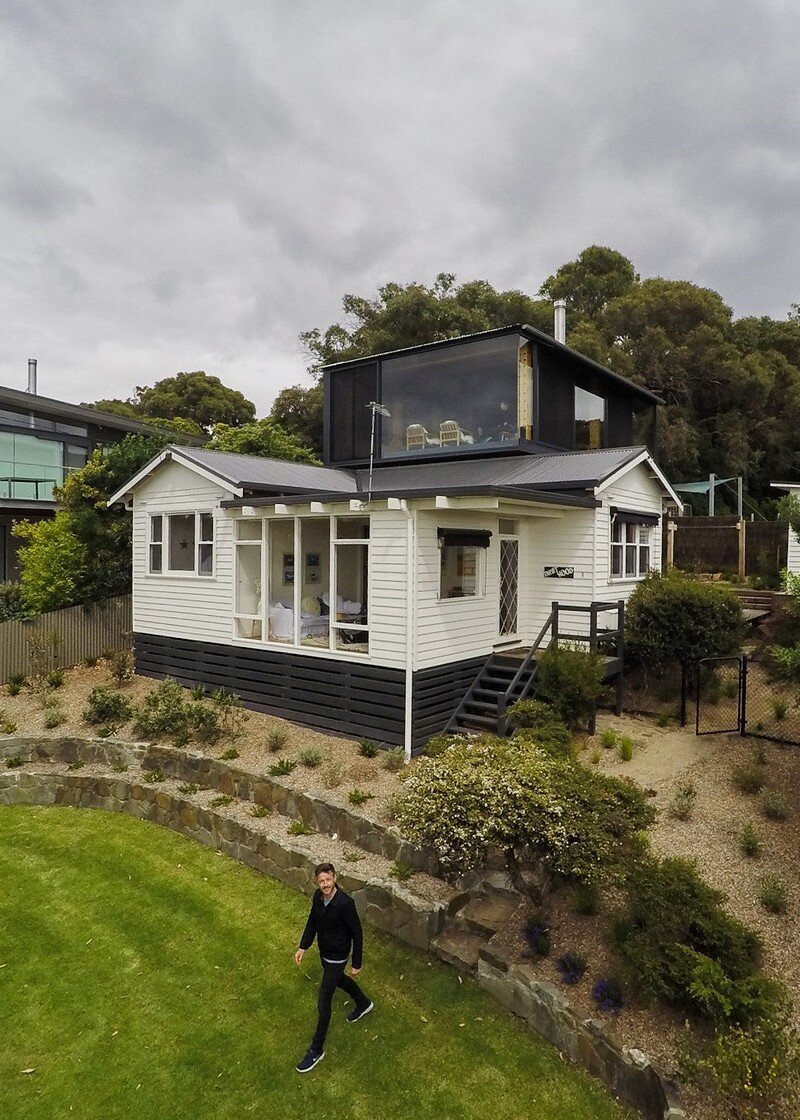 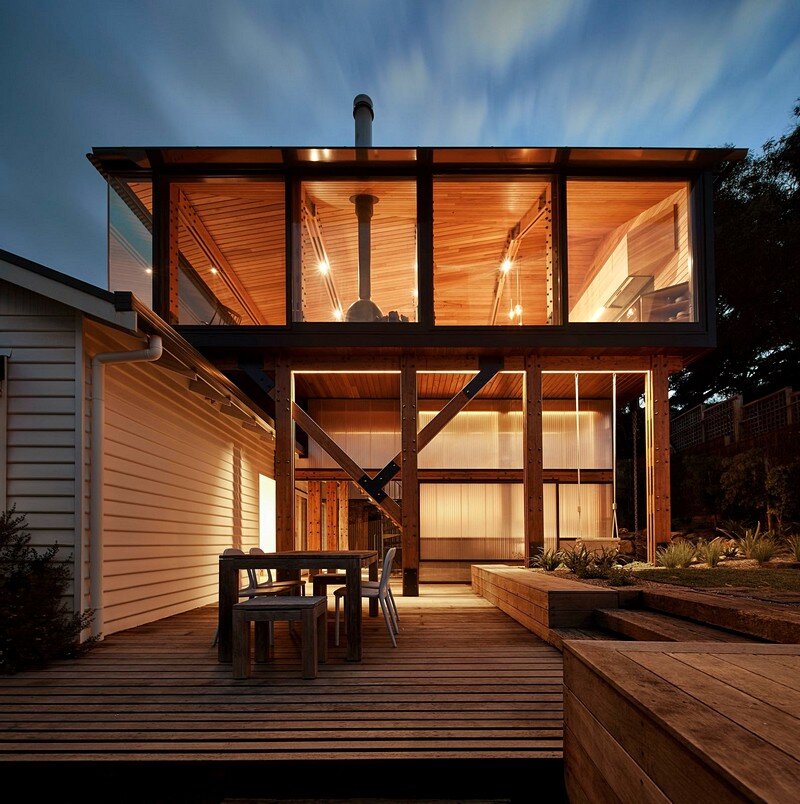